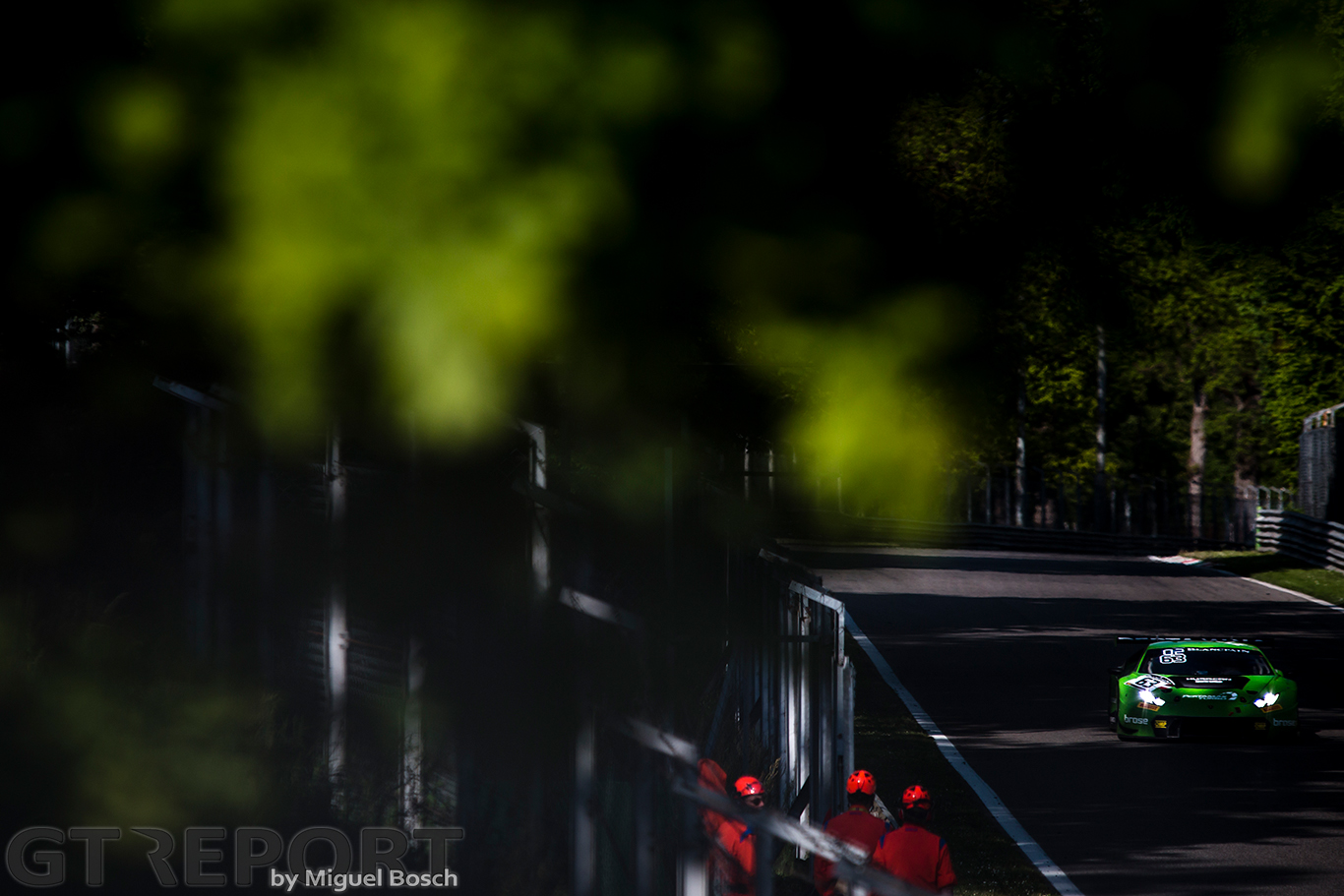 One quick pit stop was all Lamborghini needed to win the first race of the Blancpain GT Endurance Cup season. As Mirko Bortolotti helped strap Andrea Caldarelli into the Lamborghini Huracán GT3, the Grasser Racing pit crew performed at the top of its game to service the green thoroughbred and sent it on its way out of the pits well in front of the SMP Racing Ferrari 488 GT3. Once the speed set in, no one could match the Austrian Lamborghini works squad at Autodromo Nazionale Monza. Not even Italian compatriots Ferrari.

Italian cars have always felt right at home in Monza. Ferrari is one of those Italian brands with a rich history in the over half a century old springtime endurance classic. On Sunday morning, the book of legends is started another chapter when the AF Corse Ferrari raced by Italian fury Alessandro Pier Guidi surges to pole position, followed by Norbert Siedler in the Grasser Lambo at only six hundredths of a second. Davide Rigon completes the top three in qualifying by putting the SMP Racing, AF Corse-run Ferrari on third place. The Veneto driver is one of 32 drivers to stay within a second of the pole-sitter. 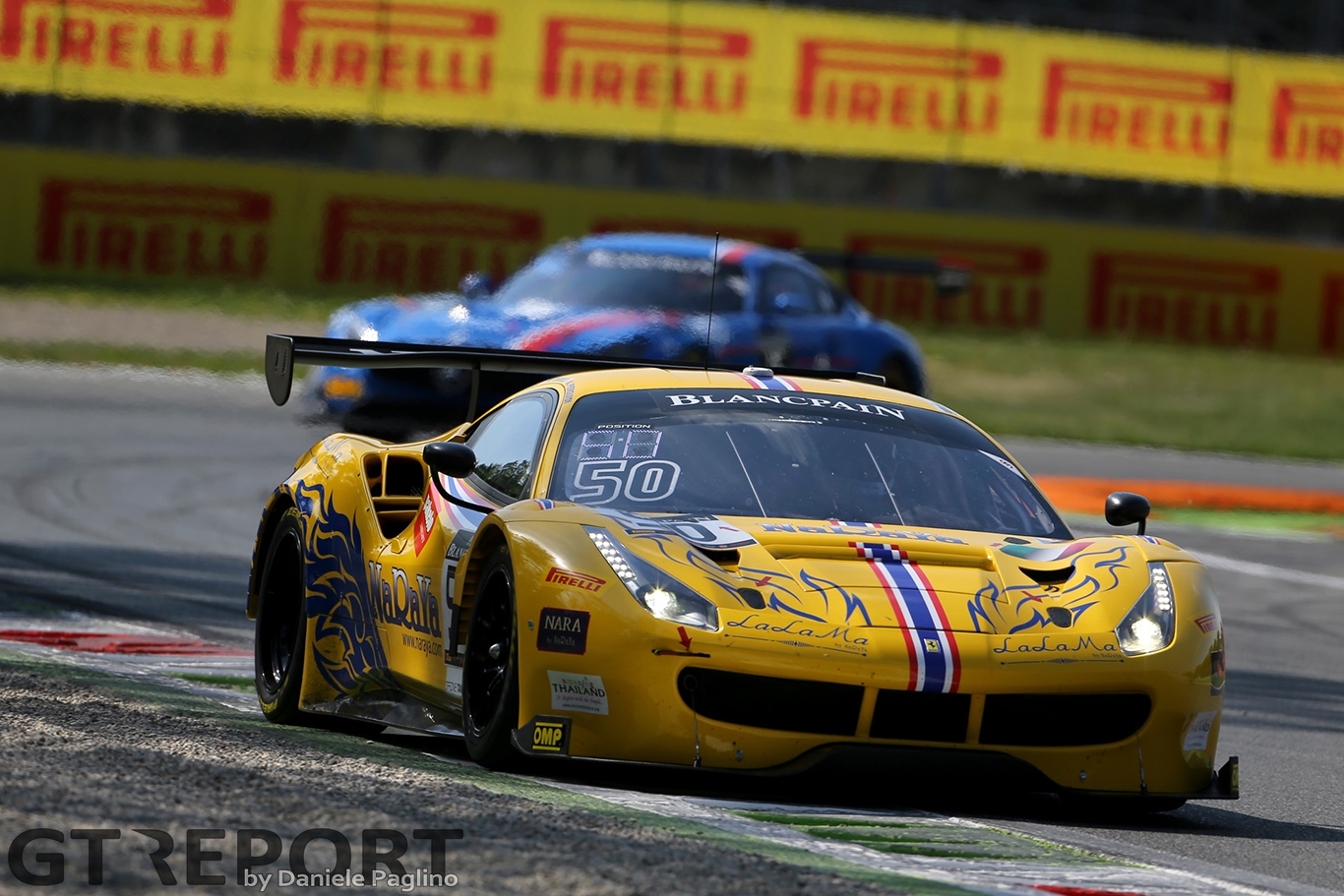 Today is looking to be another Italian day. Ferrari and Lamborghini are out in force at the front. Only a handful of foreign makes can mix it up with the natives. One of the few is Bentley. The big M-Sport-run Continental GT3 is high on power and with Guy Smith, Steven Kane and Oliver Jarvis taking turns behind the wheel is piloted by British aces. The Bentley Boys have nested themselves on the second row for the start.

As the sun rises high in the sky, the cars arrive on the grid. It’s nearing 14:45 in the afternoon and time for the race to go green. The fans heed the sound of racing that woke up Monza this morning and are making their way to the grandstands. Others, against the loudly yelled instructions from security personnel, climb the steep banking for a glimpse of their heroes. Even when the start is only minutes away, some of the the tifosi are still sneaking in through the holes in the fences that align the Autodromo limits.

A fully packed field of 50 GTs rolls through the Parabolica. Spearheading the field is Pasin Lathouras. The Thai has been picked to steer the yellow AF Corse 488 to the green flag. As he storms into the first chicane, he locks up the brakes and overshoots the turn. Unaware of the pandemonium behind him, Lathouras carries on bravely, but without the lead. 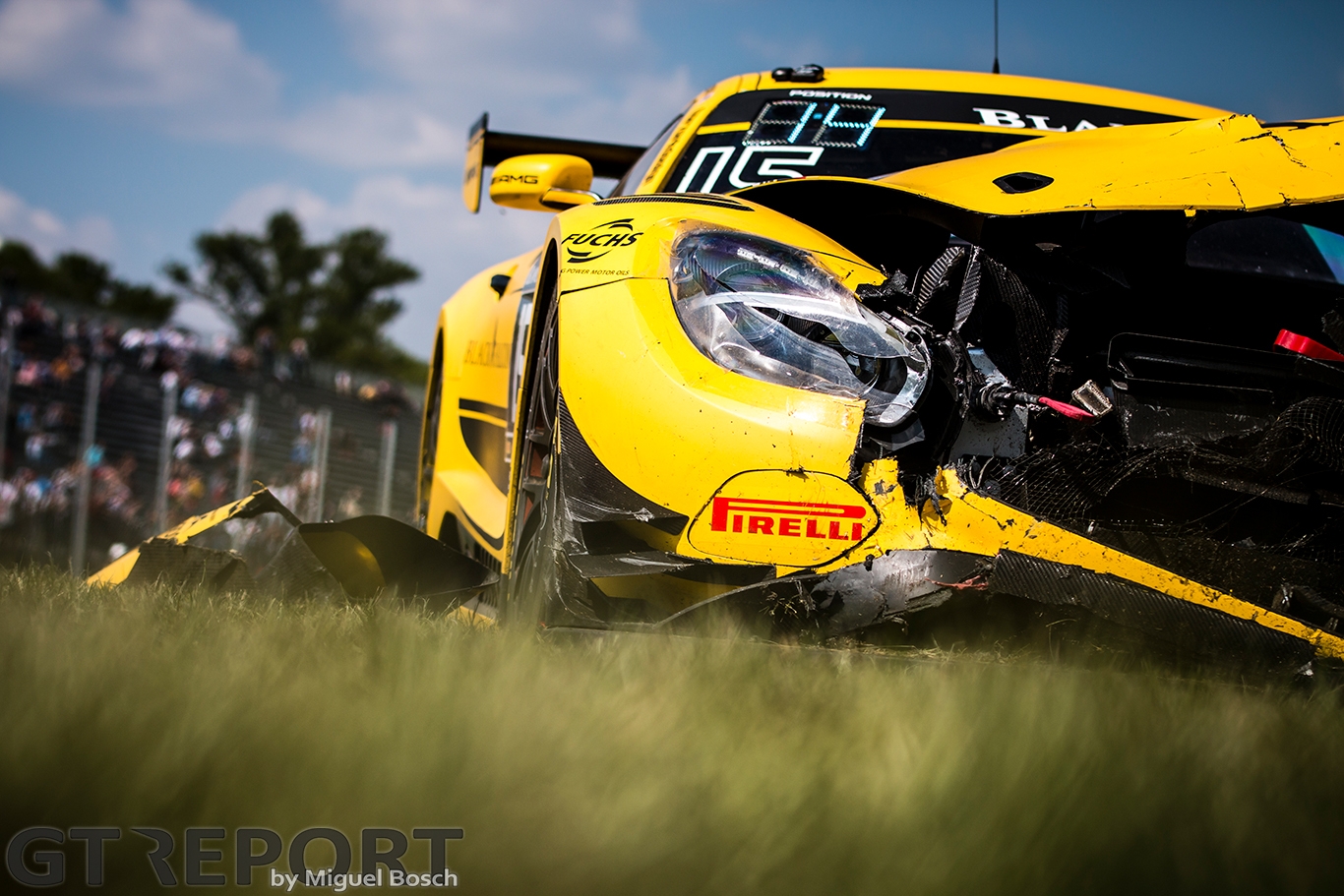 In the long run to the first corner, Guy Smith in the Bentley and Ezequiel Perez Companc in the Grasser Lamborghini tangle while fighting over second place. Smith barely keeps the car on the track, but Companc veers into the grass and back onto the track, in the midst of oncoming traffic. Like a herd of bisons, about forty cars begin to scramble to avoid the backwards rolling Lamborghini. When the dust settles, 16 cars are damaged, many of them beyond immediate repair.

While the marshals clean up the track, the stewards of the meeting decide to put the blame for the mess on Guy Smith. But the Brit is unaware of the race director’s calls for him to serve his penalty.  Believing the team has still time to discuss the penalty, he crosses the pits lap after lap. When he finally does come in, the die is already cast: The black flag has gone out minutes ago.

Now that the big Bentley is out of his way, Mirko Bortolotti is looking at the back of Miguel Molina’s SMP Ferrari. The Spaniard took the lead in the first corner when Lathouras went straight on at the original start and has been leading ever since.

64 minutes into the race Molina and Bortolotti enter the pits nose to tail. They jump out, help their team mates in and let the crews finish changing tyres and fuel up. Andrea Caldarelli races the Lambo out and is away long before Victor Shaytar is. The Russian is stuck in his pit box for too long.

Two hours are still to be raced, but Caldarelli and later Christian Engelhart are already in the clear. The gap to the SMP Ferrari in second, although not getting any bigger, is ample, and starting each stint on sticker-new tyres gives the Lambo the edge over its competitors. When in the later hours Davide Rigon is called in to serve a penalty for overtaking under yellow, the last remaining threat to Engelhart is gone. 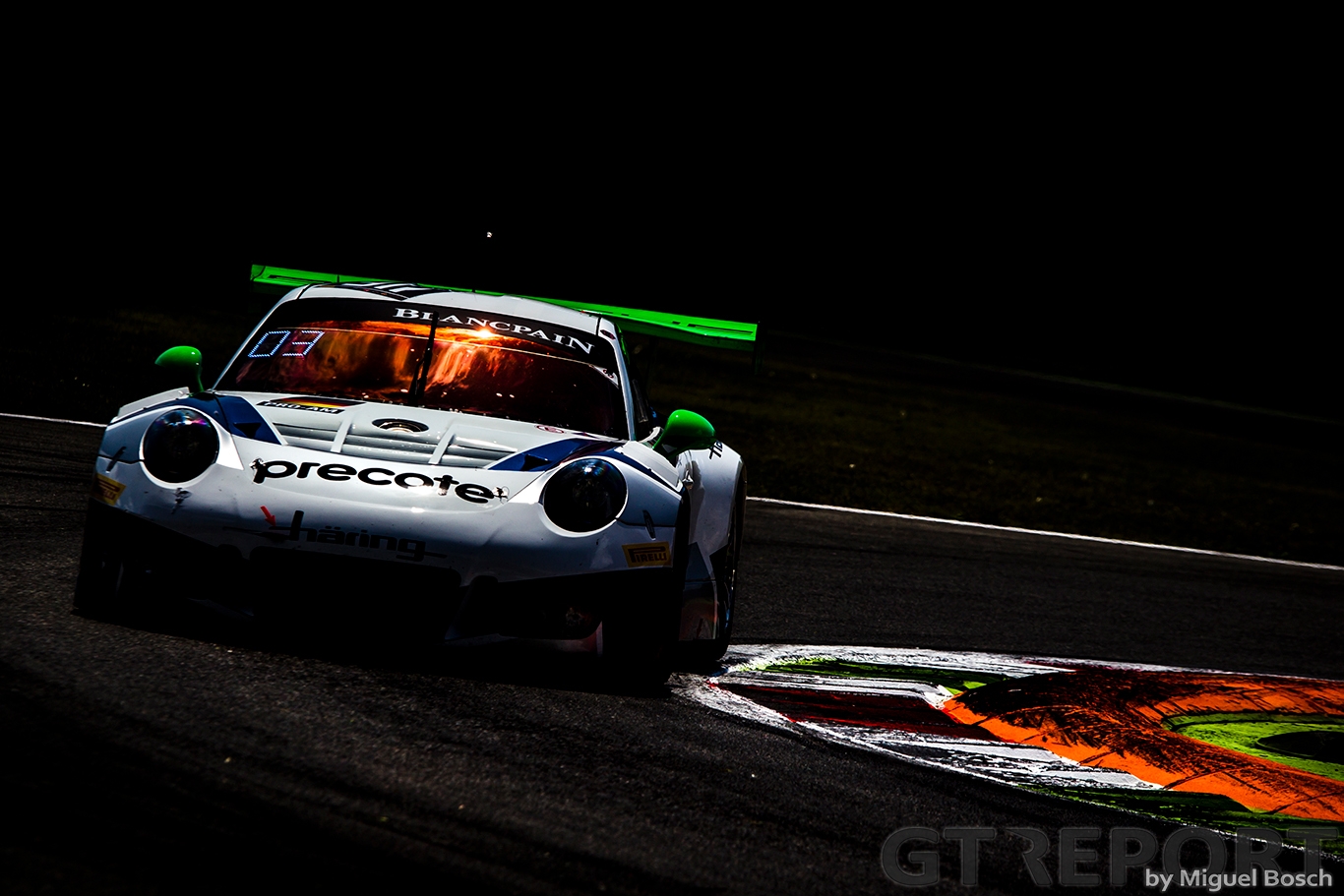 Clemens Schmid, running a strong race in the ISR Audi R8 LMS GT3, is ready to take the spoils. The Austrian is successfully fending off attacks from Pier Guidi and with only minutes remaining stands his ground. Everything is in place for him to take the trophy for second place when at high speed his left rear tyre gives up in an explosion of rubber and bodywork. The drama for the 26-year-old elevates Pier Guidi into second, while AMG, represented by HTP Motorsport drivers Jimmy Eriksson, Franck Perera and Maximilian Buhk, moves up to third.

Engelhart, meanwhile, continues on undisturbed by any of it. Two years since Lamborghini rushed the GT3 scene with an astonishing victory in Monza—one that was taken away hours after the race and returned only in the summer of 2015—the Squadra Corse repeats its win in Brianza. Under the roar of the crowd the German drives the Lambo into parc fermé where he is welcomed by the elated Bortolotti and Caldarelli.

Back in 2015, the Grasser team couldn’t continue its form into the later parts of the season, only taking an additional Blancpain GT win at the end of the 2016 season despite often stealing the show throughout the two years in the category. With all the lessons learnt, now is the time for the Austrian-Italian alliance to double down on its homeland victory and expand the Italian stronghold abroad. 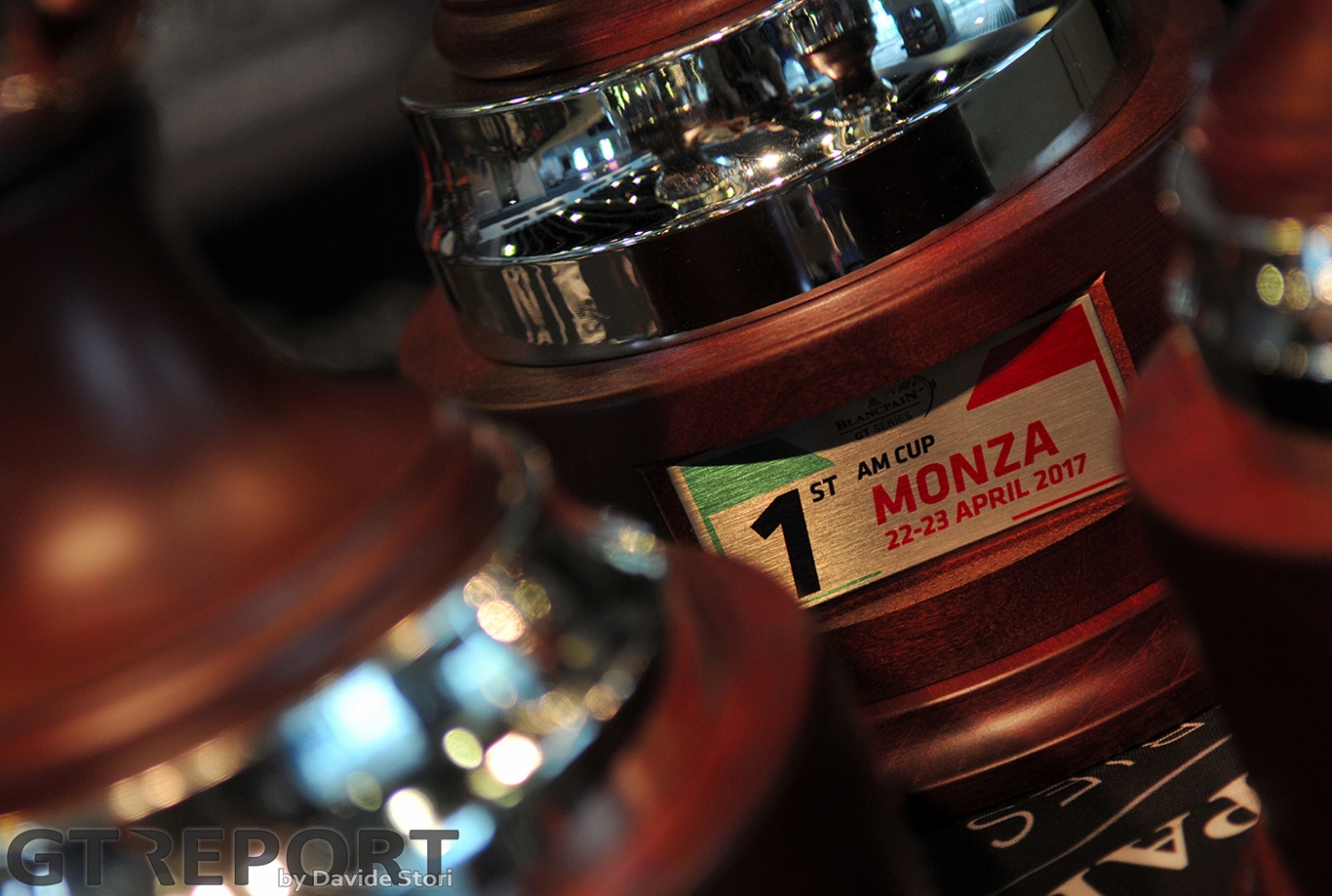