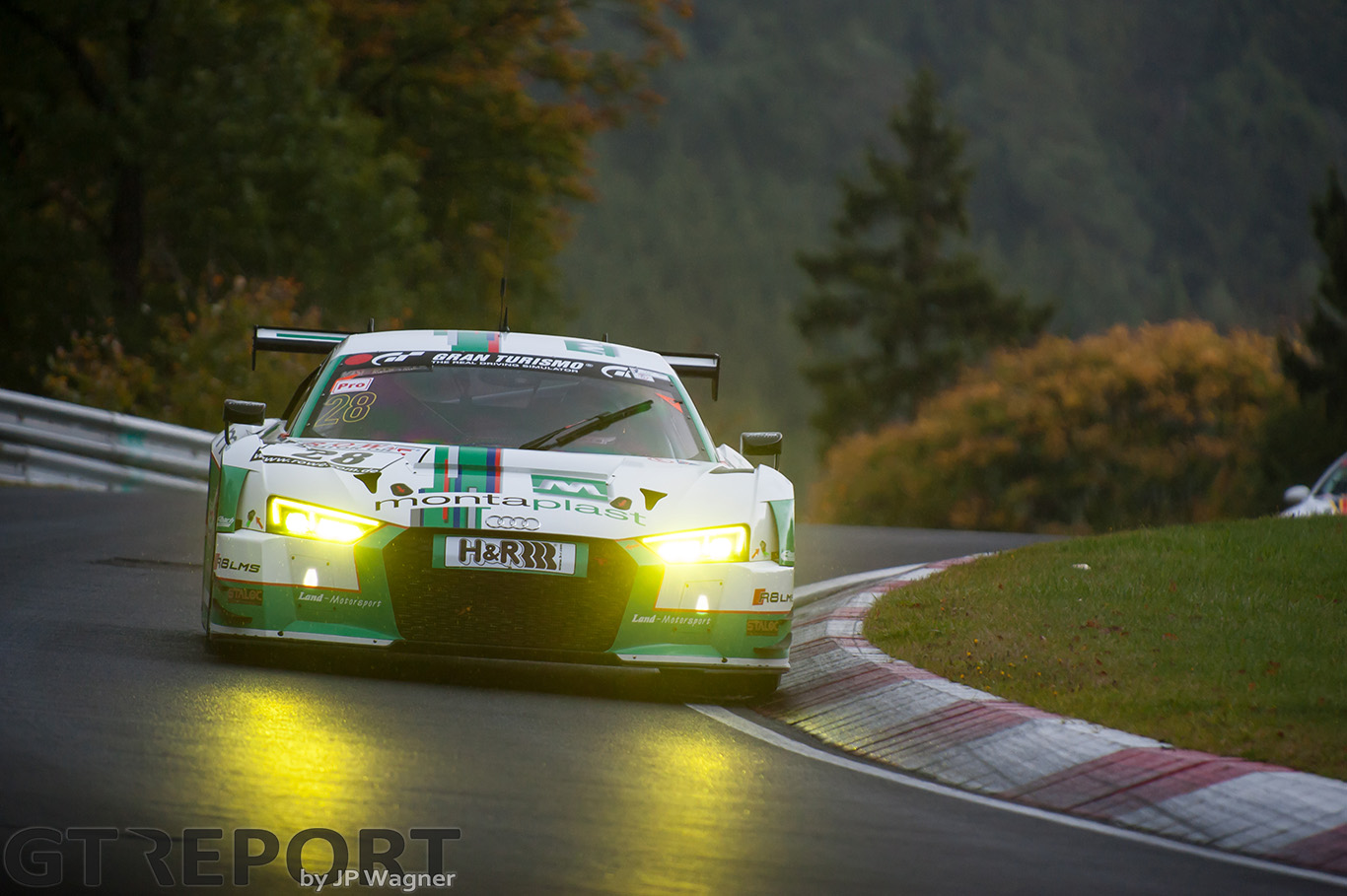 One team, two continents, three races. Land Motorsport went to battle on three fronts simultaneously on the same day. Where many other teams may flounder in the challenge, the Audi team scored a three-win high on one day, with victories stretching from Hockenheim and the Nürburgring all across the Atlantic Ocean to Road Atlanta.

The great triple challenge with the focal point on Petit Le Mans means Wolfgang Land is left without many of his regulars. Amongst the core group of people who left for the USA are drivers Connor De Phillippi and Christopher Mies. The gap the Petit Le Mans-goers leave behind is filled by Audi favourites Markus Winkelhock and Dries Vanthoor.

Qualifying on Saturday morning turns out to be a daunting task for many. The damp and cold track leaves many slower cars to run until the end in an attempt to make optimal use of the slowly drying track, but driving in the way of the fast GT3s who traditionally go all-out in the final 15 minutes of practice. A somewhat scrambled grid forms with the Wochenspiegel Team Monschau Ferrari 488 GT3 on pole position. 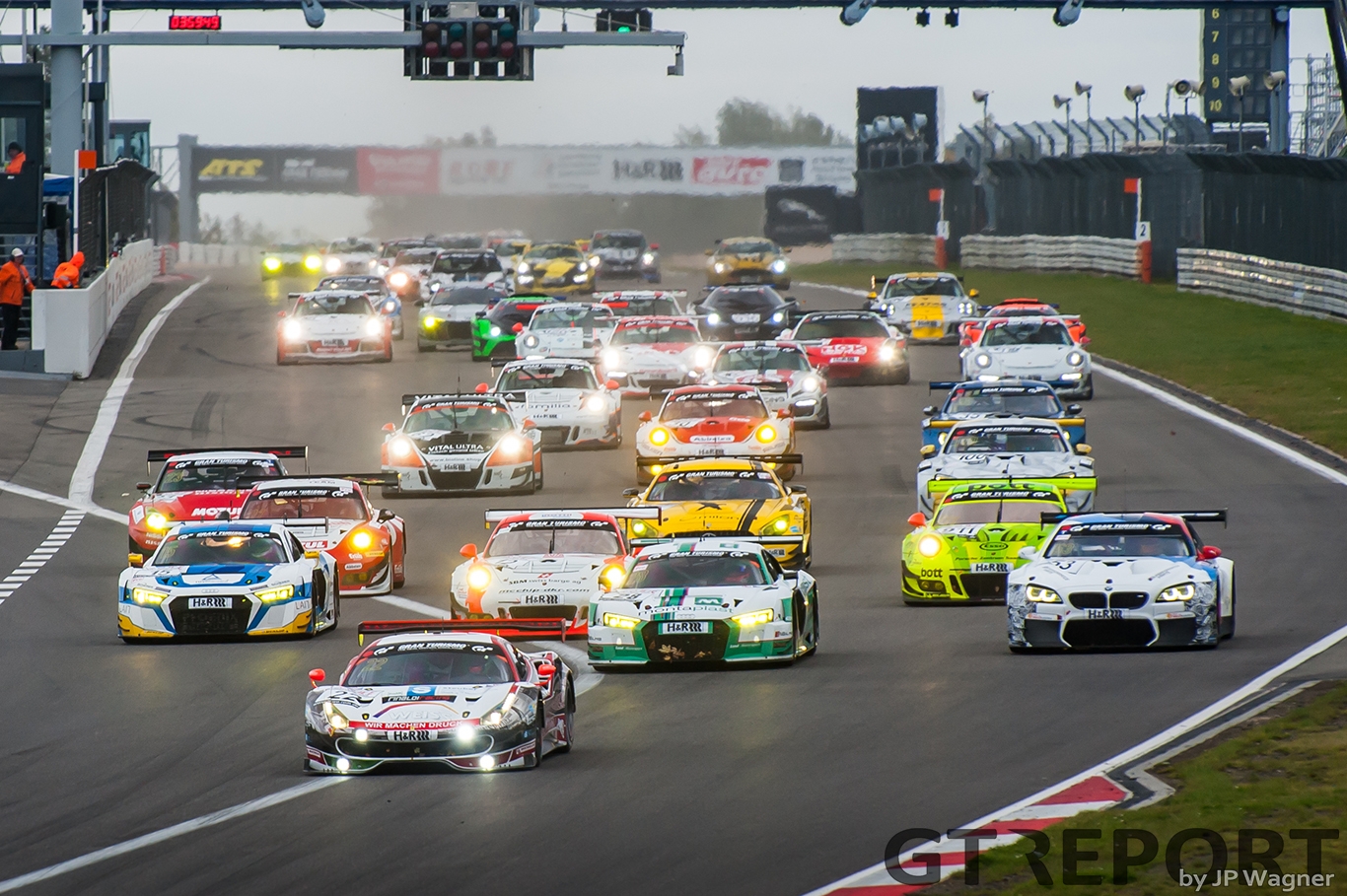 Winkelhock leaves no illusions for polesitter Jochen Krumbach when the lights go green. The Wochenspiegel Ferrari racer can only hold on through the first corners of the 49. ADAC Barbarossapreis before a slight mistake coming out of the Arena is immediately seized upon by Winkelhock.

Arriving on the Nordschleife, Krumbach struggles with his pace. In the distance the Land Audi slowly disappears, but that’s the least of his worries: behind him Kévin Estre in the Manthey Racing Porsche 991 GT3R is looking, searching for his way through to rejoin Winkelhock. Frank Stippler is close behind as well, waiting for his moment to strike.

That moment comes the second time on Döttinger Höhe. In Estre’s slipstream, Stippler gathers enough speed to launch himself past the neon-yellow Porsche and Krumbach’s Ferrari and into second place.

Estre is quick to follow Stippler and together the Audi-Porsche tandem start their chase for Winkelhock. The German is hundreds of meters up ahead, but it’s not stropping them: halfway through the third lap they’ve rejoined the back of the Land Audi.

Biding their time through the traffic on the tight Nordschleife, the attack comes when the track widens up on the modern Grand Prix course. Pulling no punches, Stippler pushes and shoves to make his way through for first position, but Winkelhock is having none of it and blocks his fellow Audi works driver’s way. 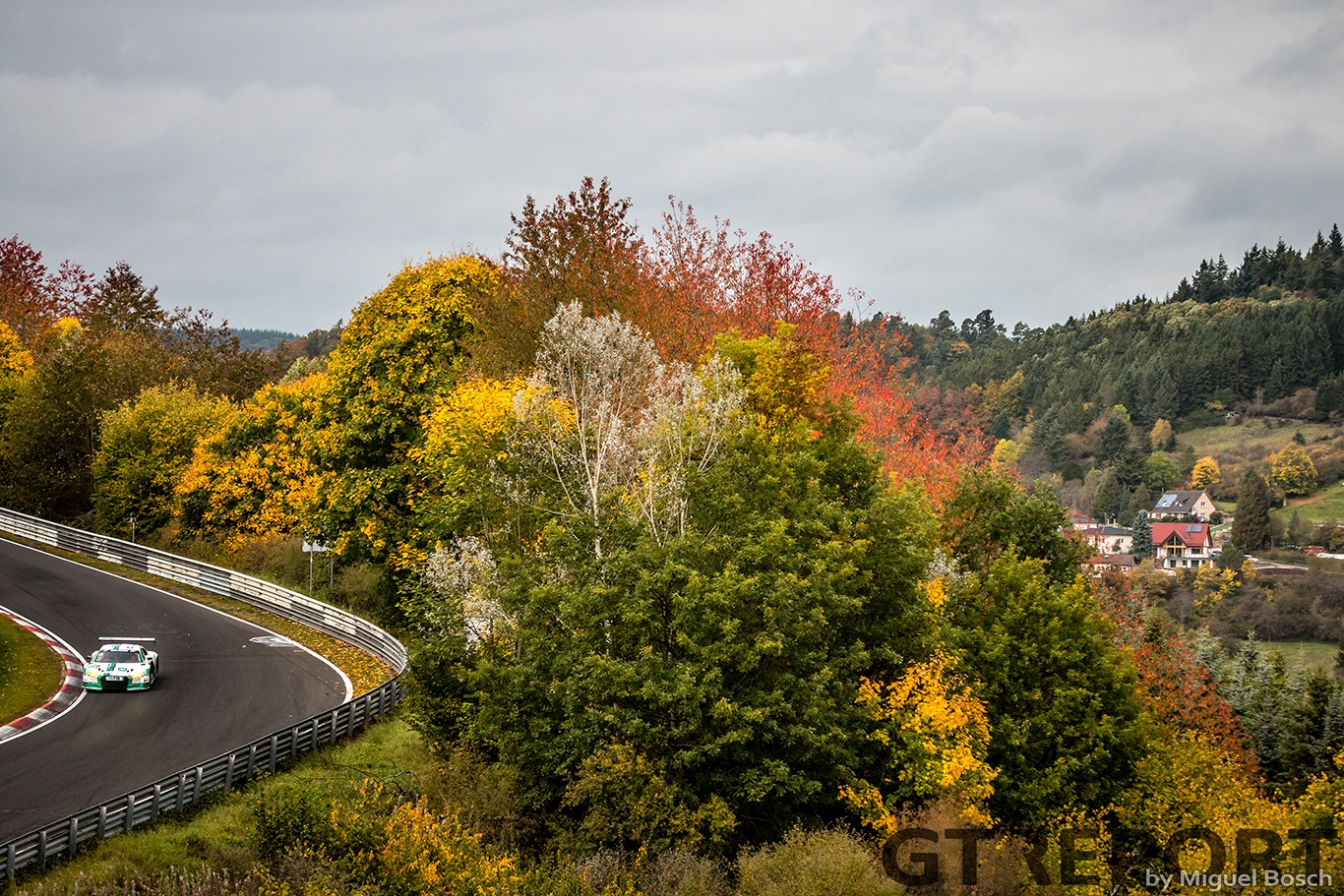 In the scrimmage that follows, Stippler and Winkelhock touch, leaving the Phoenix Audi sliding through the corner. Estre joins in on the fight and braking for the turn onto the Nordschleife, the Frenchman jumps in the smallest of gaps and takes second place.

In the midst of battle, Winkelhock keeps his cool, maintaining his position at the head of the field despite many challenges by both Stippler and Estre.

At the end of the first hour all three leaders come in for their first pitstop of the race. Rain is coming, but for now everyone stays on the slicks despite the first drops already falling on the track. Winkelhock hands over the Land Audi to Vanthoor, Stippler steps out of the Phoenix Audi to let Dieter Schmidtmann in and Estre gets out to let Matteo Cairoli take over the Manthey Porsche.

Cairoli’s stint only lasts until the Hatzenbach corners. Overeager in his pursuit of Schmidtmann in the Phoenix Audi, the Italian slices too close to a BMW 318is while lapping and smacks into the guardrail taking out both himself and the BMW in spectacular fashion.

The onset of rain is for many their downfall, but not for Black Falcon. On the wet Nordschleife Hubert Haupt feels at ease. Decades of racing the Nordschleife has given the veteran racer all the knowledge needed to guide the Mercedes-AMG GT3 through the treacherous conditions. After the foundation laid down by Yelmer Buurman in the opening stint, Haupt soon passes Schmidtmann in the Phoenix Audi and begins his push for the leading Dries Vanthoor. 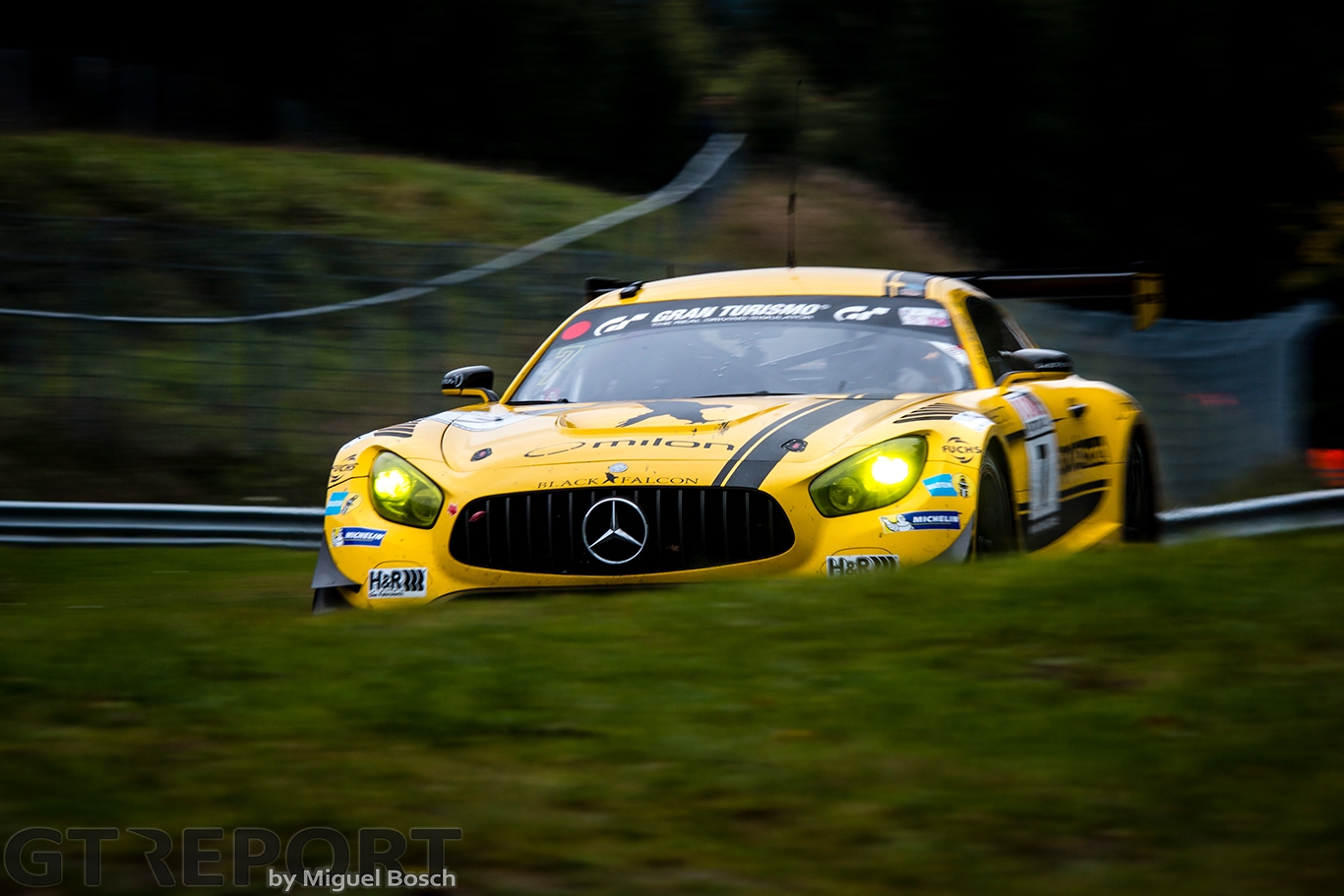 The gap to the Land Audi is closed, but that’s as far as Vanthoor is willing to let it go. The Belgian easily counters Haupt’s march, not letting the AMG get close enough to attempt any attack.

In a place he doesn’t know in this car, no sign betrays that today is Vanthoor’s premiere in a GT3 on the Nordschleife. Mistakes are never far on slicks in the wet and while his race comes close to ending when he escapes a hit-and-run with the barrier at Klostertal with minor damage, it’s one more powerful display of raw talent by the youngest of Vanthoor brothers.

When his pit window closes in and the minimum pit stop times are dropped after the 19-lap mark, Vanthoor decides the time is now to break open a gap before the team’s final pitstop.

It’s the decisive moment for the win. The gap Vanthoor builds during the rush leaves the team out of reach of the competition. By that point the race has settled in—there’s no more threat for Winkelhock in the final 25 minutes. The rain is dying down, the Black Falcon AMG unable to catch up.

Victory number two of the day is conquered by Land. Earlier in the afternoon the call came from Hochenheim bringing the news that Ronny Wechselberger took the first at the DMV GTC race there.

Deep in the European night the third Land party is on at Road Atlanta as well. 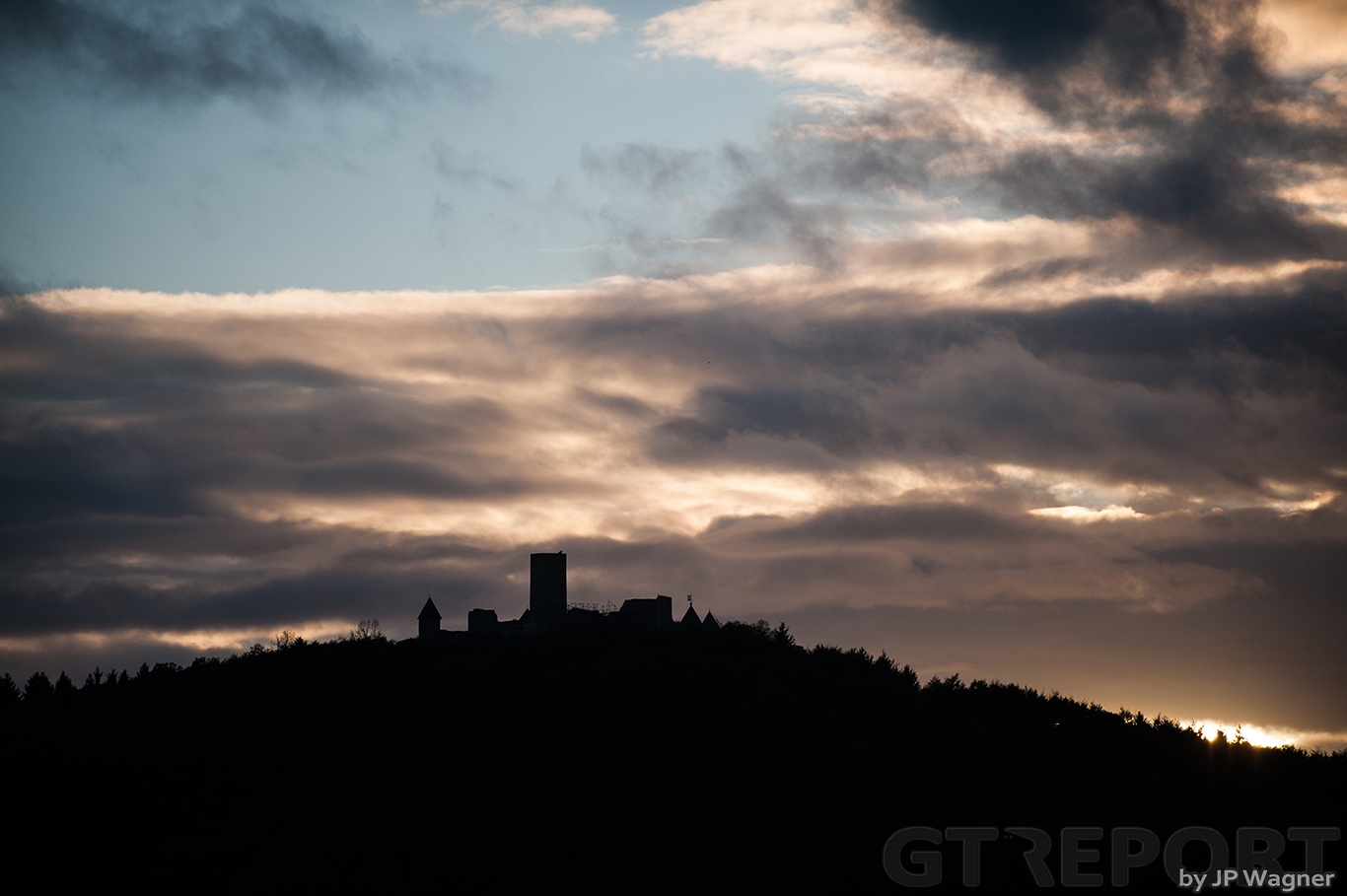 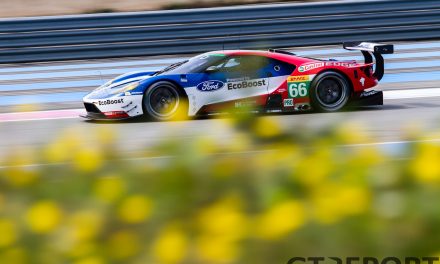