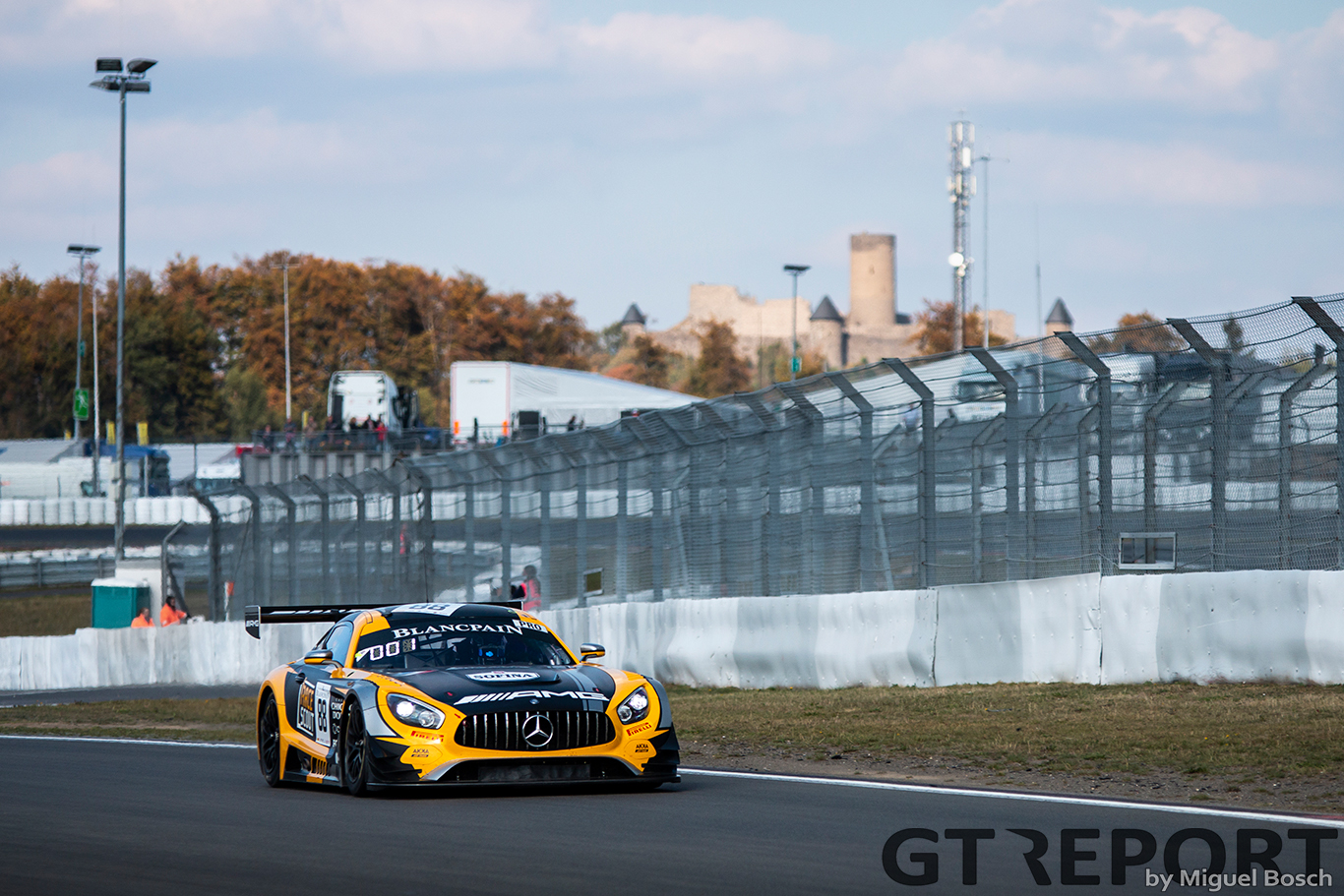 The 2018 Blancpain GT Series Sprint Cup finale at the Nürburgring had it all: drama, intrigue, and a thrilling title-deciding fight. What began five months ago at Zolder, came to an end in the Eifel with a win and championship victory for AKKA ASP Mercedes-AMG GT3’s Raffaele Marciello and Michael Meadows.

Only AKKA ASP and WRT are left standing on Sunday afternoon before the final race. Yesterday’s winners, Grasser Racing, did go on to win the first race of the weekend to stay alive in the fight, but are soon after penalised and then hours before the start of the finale completely taken out of the weekend by the stewards. Not only did Lamborghini Huracán GT3 driver Christian Engelhart improperly secure his HANS device—for which the number 63 Lamborghini co-driven by Mirko Bortolotti received a time-penalty costing them the win and a chance to carry on the fight to Sunday’s race—the 2017 Blancpain GT champion also tried to cover it up by destroying the footage on the on-board safety camera.

This leaves just Christopher Mies and Alex Riberas versus Raffaele Marciello and Michael Meadows; Audi R8 LMS GT3 battling Mercedes-AMG GT3 for the Blancpain GT Sprint Cup. Although Mies and Riberas inherited the win from Grasser and now lead the championship by nine points, their chances at claiming the crown aren’t that much better than Marciello and Meadows’: the WRT squad needs fourth place to be sure of the title if AKKA ASP wins. And AKKA ASP winning, that’s a very real possibility as the French team starts from the front row alongside pole-sitter and fellow AMG warriors Black Falcon. 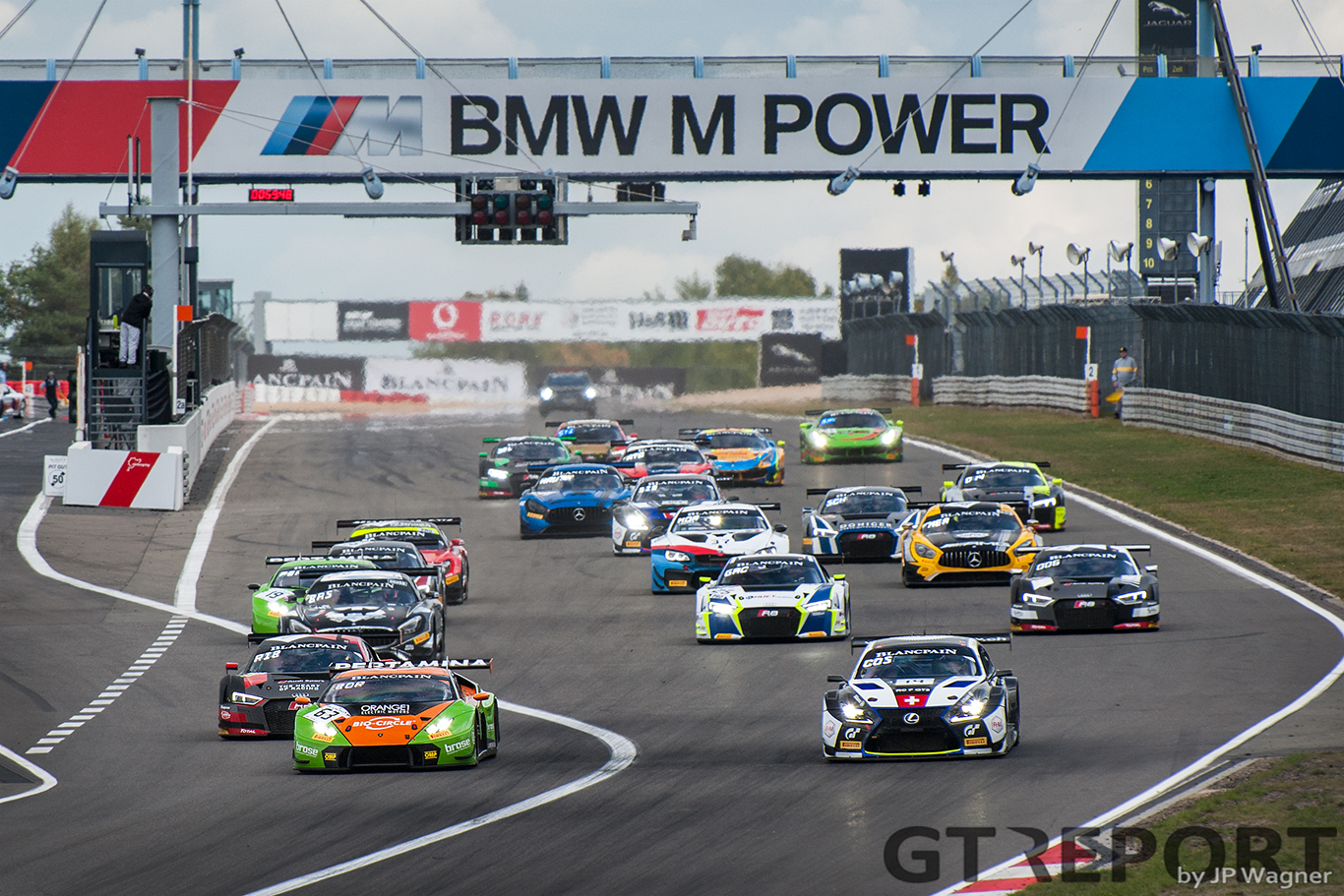 Black Falcon has entered its hometown race with a Silver Cup drivers’ line-up. And regardless of how well Hubert Haupt knows the Nürburgring and his wealth of experience in racing, when the difference is in the tenths of seconds, the gentleman driver will have a hard time measuring up to the large field of full-pro drivers.

Meanwhile, Mies starts the race from 13th on the grid after the Audi works driver suffered a brake failure in qualifying and speared off the track and into the tyre barriers at the Dunlop-Kehre. He and team-mate Riberas have 60 minutes to reach the all-important fourth place.

What was expected to happen at the start, happens: Luca Stolz keeps the Black Falcon Mercedes-AMG GT3 in the lead, followed by Marciello who’s not risking anything when the lights go green.

From the mid-field, Mies needs to push on through and does so: immediately he begins picking off cars. When he comes into the pits to hand over the Audi to Riberas, the number 1 Audi is up to seventh position.

At the front of the field Stolz and Marciello go to the end of the mandatory pitstop window: Stolz to extend his stint to the maximum before handing over to co-driver Haupt, Marciello to simply mirror what Black Falcon does and beat them in the pits with a faster pitstop. 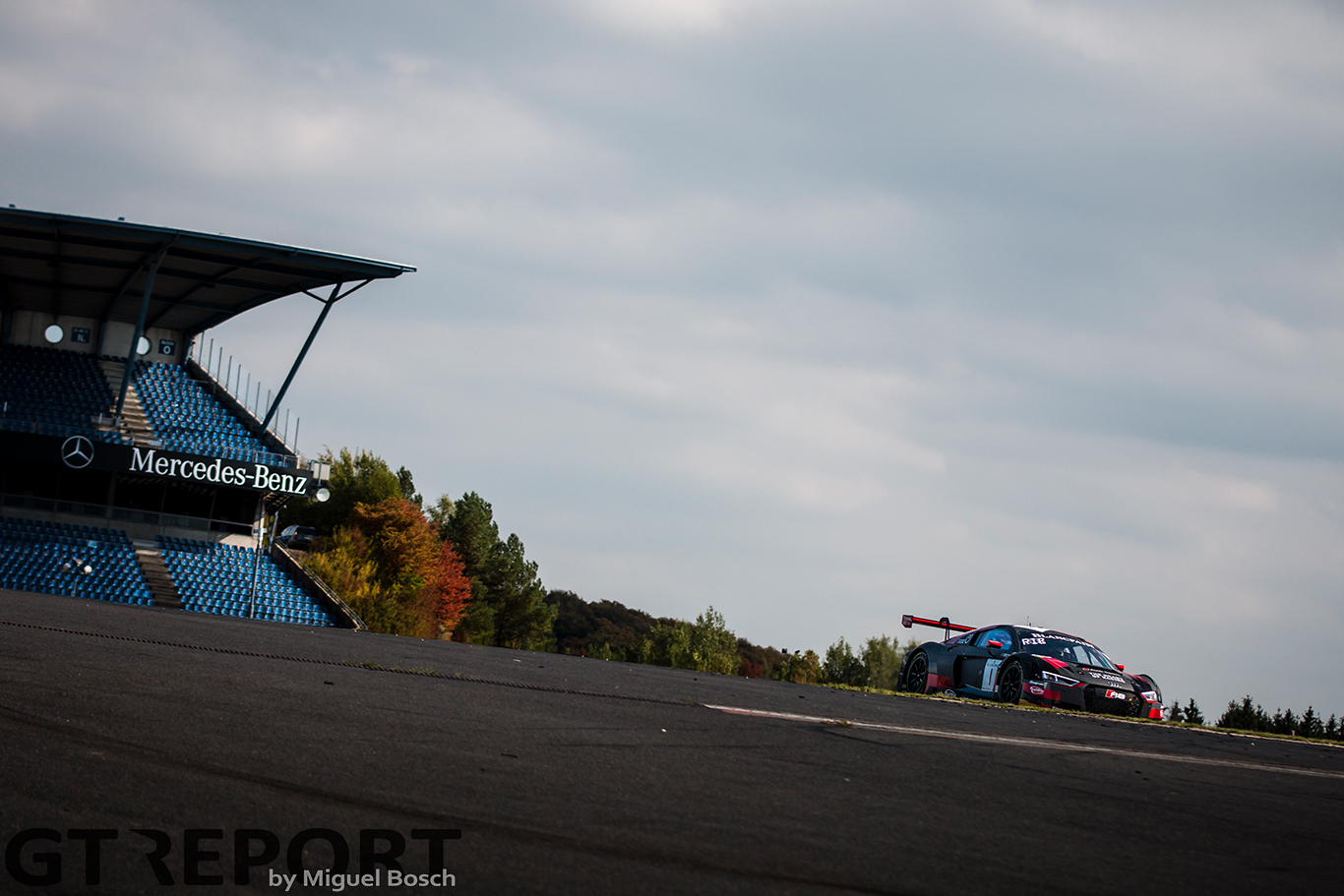 This AKKA ASP does. The Jérôme Policand-led team is four seconds quicker than Black Falcon and comes out in front of the dark-blue Black Falcon AMG.

With Meadows in the lead of the race, Riberas must finish fourth to take the title. Having gone up to fifth place through the pitstops and with a fellow Audi compatriot in front of him in fourth, he seems golden. That Audi team, however, has plans of its own: Attempto Racing smells blood after the disqualification of Grasser Racing and the retirement of the WRT Audi of Will Stevens and Dries Vanthoor earlier in the race. The road to third place in the championship lays wide open and the team needs the 7.5 points for fourth place to secure it. Steijn Schothorst isn’t just going to give it up.

Stuck behind the young Schothorst for almost half an hour now and minutes remaining, Riberas is left no choice but to dive to the inside of the first turn. In the scrimmage Riberas and Schothorst touch, damaging one of the WRT Audi’s wishbones. Riberas holds on and attempts a second attack but is again counter by Schothorst. In the midst of battle, the Grasser Lamborghini of Ezequiel Pérez Companc joins the fight for fourth. With a damaged suspension Riberas can do nothing. A couple of corners later the Audi disappears into a cloud of dust at the Dunlop hairpin as it takes a trip through the gravel. Realising his car is done for, Riberas slowly returns to the pits and abandons the race in defeat.

Despite Haupt having caught up with the AKKA ASP AMG, the former DTM pilot forms no threat to Meadows, who runs unopposed in the lead. The Englishman drives to victory for the second time this year and takes the Blancpain GT Sprint Cup title for Marciello and himself.

Behind the two Mercedes-AMGs, Simon Gachet and Christopher Haase race their Saintéloc Racing Audi R8 LMS GT3 to the podium. The French-German duo move into third place at the start and from there on drives in no-man’s land: AKKA ASP and Black Falcon are too fast to keep up with, Attempto Racing is too far away to be worried about. Saintéloc’s third place secures them eighth position in the championship.

The Sprint Cup title might have slipped through Mies and Riberas’ fingers, their fight is not yet over: the Blancpain GT Series will soon land in Catalunya to end its season with the 3-hour endurance race at Circuit de Barcelona-Catalunya. Up for grabs are the Endurance Cup and outright Blancpain GT titles. Marciello rocketed into the overall championship lead since he began a streak of big-points scoring finishes, but Mies and Riberas are only 18.5 points behind and eager to ease the pain of losing the Sprint Cup. 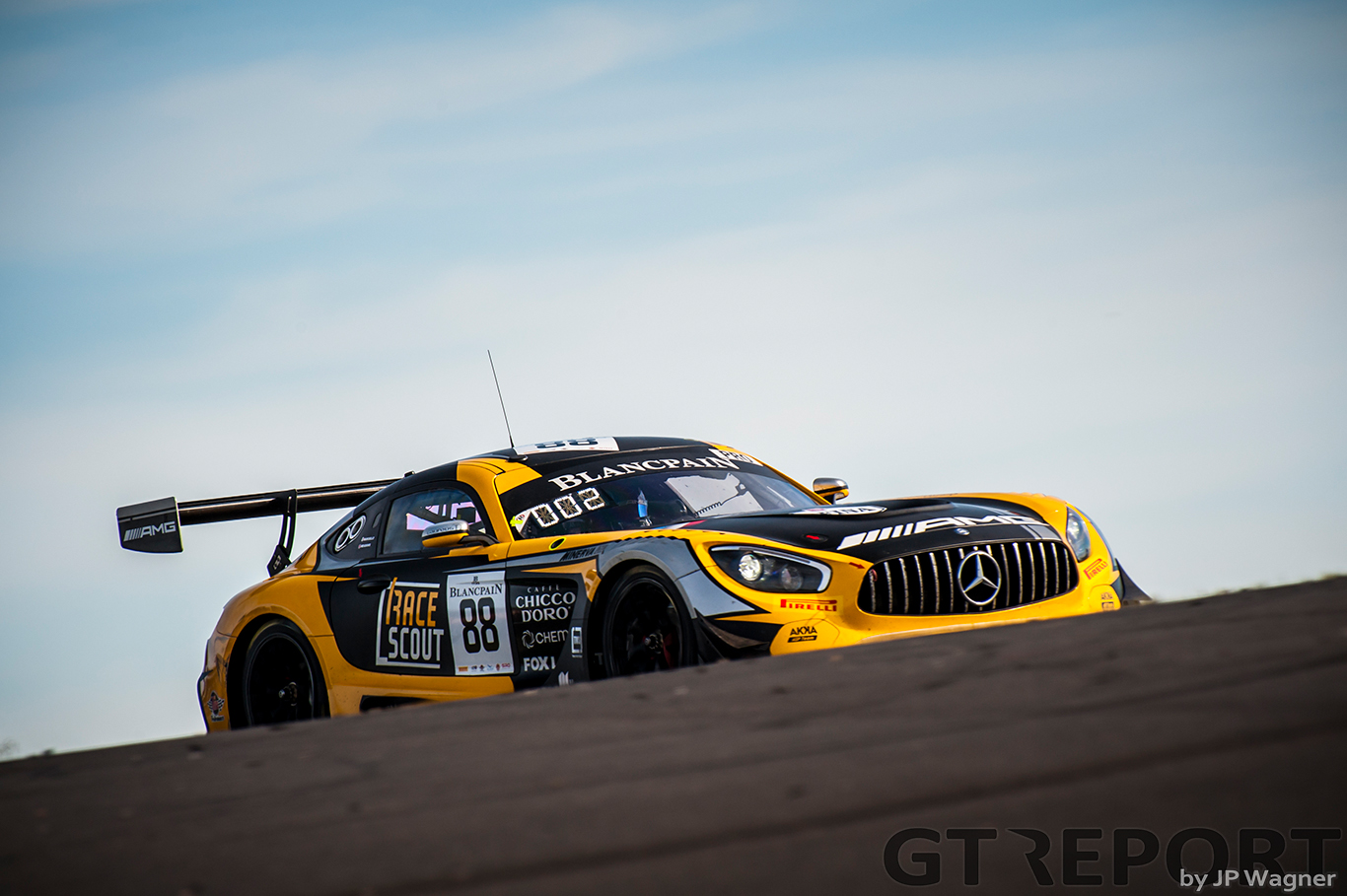 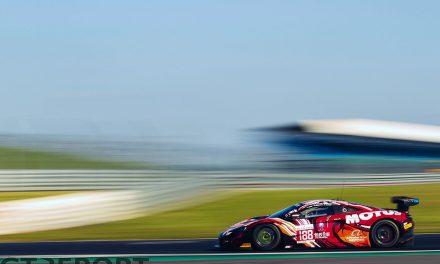 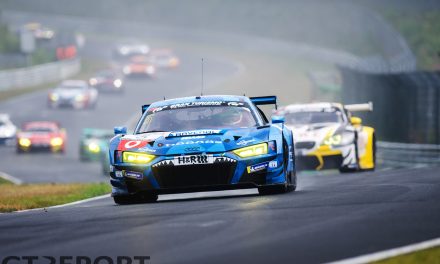 Vincent Kolb: “Driving for Phoenix is a blast!” 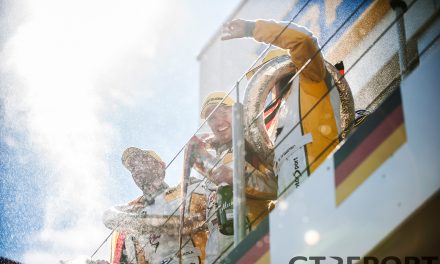