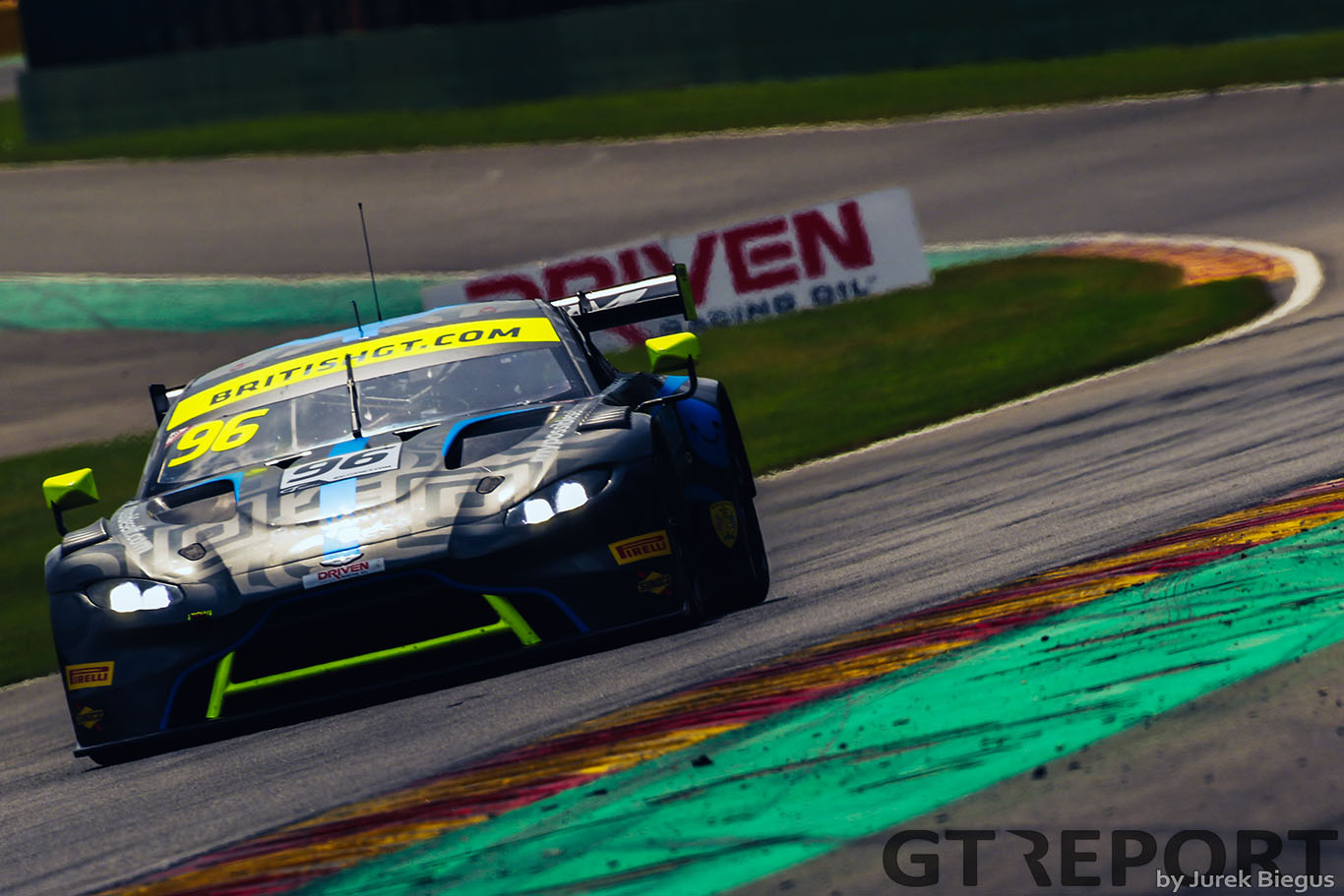 Bradley Ellis secured his first British GT Championship win in 11 years as he and Ollie Wilkinson took a lights-to-flag victory at Spa-Francorchamps.

Adam Balon and Phil Keen’s championship lead took a knock in Belgium as Balon’s spin and impact with the wall coming out of Blanchimont led to the pair’s retirement.

In GT4, last lap contact between Tom Canning in the TF Sport Aston Martin Vantage and Josh Smith’s Tolman Motorsport McLaren gave Canning – and team-mate Ash Hand – their first overall GT4 win of the season, having won the Silver class early in the season at the Silverstone 500.

By his own admission, Wilkinson got a clean start to the race and then set about getting his head down as the battles for position unfolded around him.

The biggest mover on the opening lap was Graham Davidson in the TF Sport Aston Martin who made up six places as he powered his way through the field to cross the line in fourth after the first tour.

Behind him, second-placed starter Michael Igoe was going in the opposite direction as he found his fifth place under threat from Shaun Balfe who was absolutely storming in the Balfe Motorsport McLaren 720S.

With less than 20 minutes of the race complete, the pair went side-by-side through Eau Rouge before the pair hesitated and lost momentum through Raidillon. Their politeness in order to avoid contact allowed Rick Parfitt to split the pair of them and gain two positions up the Kemmel Straight. A lap later, Balfe took sixth from Igoe round the outside of La Source.

Further ahead of the fifth and sixth-place scrap, Davidson used the better straight-line speed of the Vantage to depose Ryan Ratcliffe from third in the Team Parker Racing Bentley Continental GT3. 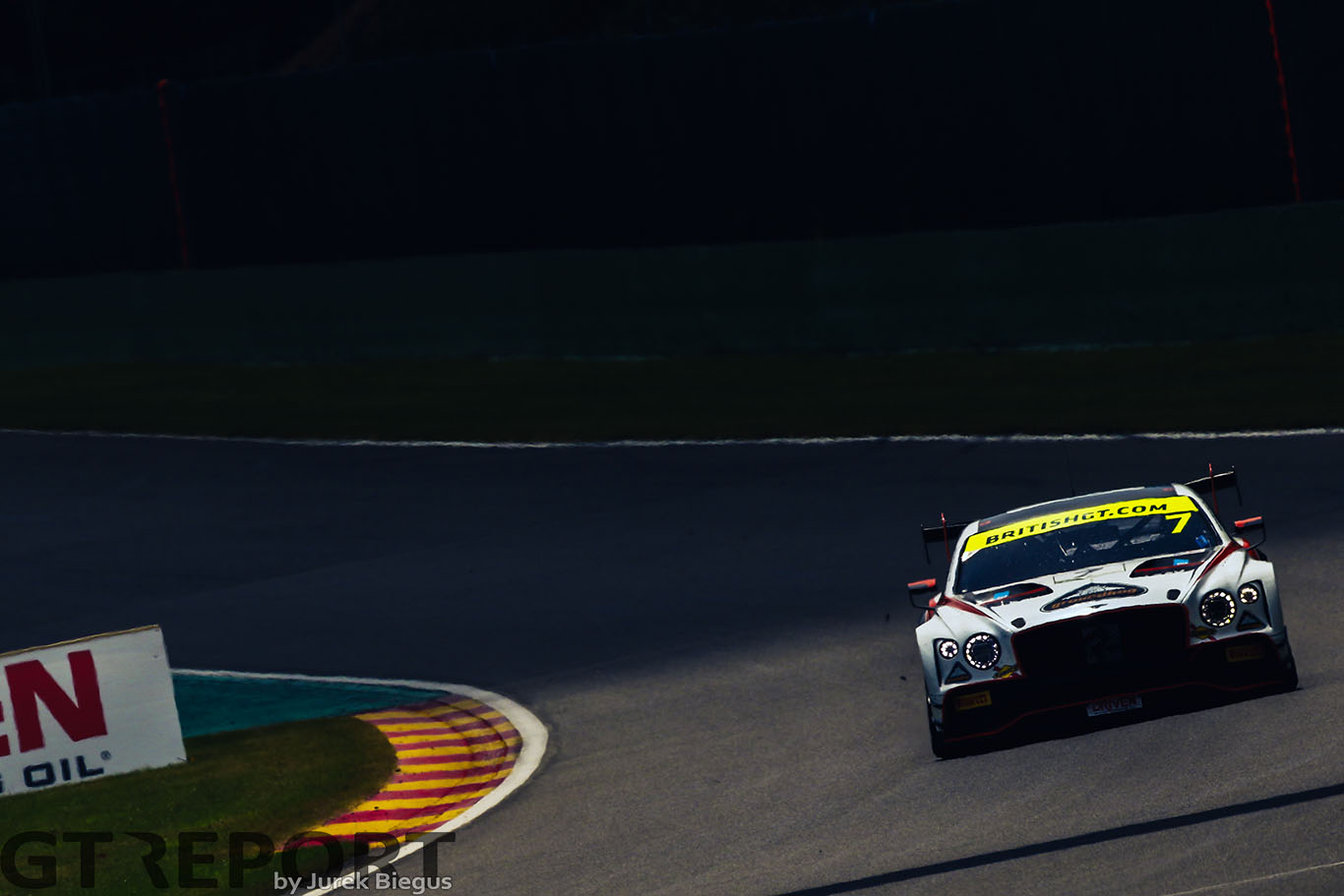 For a time, the battle seemed to settle down but suddenly the championship was thrown on its head as Balon had a wicked spin coming out of Blanchimont. Spinning through 720 degrees, the Lamborghini Huracan GT3 Evo hit the wall on the exit. While Balon got the car back to the pits, the damage to the front was deemed too extensive to repair at the track.

He told British GT TV: “I’m pissed off to be honest. Everyone did everything right except for me. I’m not thinking about the championship I wanted a good showing here, we did a lot of testing and put a lot of work into this weekend.

“Going through Blanchimont, I think I had too much lock on the steering. Watching it now it could have been worse but it is still disappointing.”

After the halfway-mark pitstops, the race burst into life – especially the battle for second.

Coming out 14 seconds behind Glynn Geddie’s Team Parker Bentley, Rob Bell – in the Balfe McLaren – took no time at all in closing down that gap and with 10 minutes to go, he was all over the back of Geddie.

The pair were duelling lap-after-lap but neither of them seemed to notice Callum Macleod’s RAM Racing Mercedes-AMG GT3 closing onto the pair of them.

With just three minutes to go, Macleod pulled alongside Bell and Geddie with the trio running three-abreast into Eau Rouge. Macleod had the inside on the right-hander at the bottom of the hill and – despite a brief wobble going up into Raidillon, took both positions to take the runner-up spot.

After the race, he said to GT REPORT: “I knew this was my only chance to get the positions. I spent a few laps behind them and knew the move had to be opportunistic as I wasn’t going to get another chance like that again.”

Behind Macleod, Geddie held on to take third with Bell crossing the line in fourth – despite spinning at the final corner on fluid spilt by one of the leading McLaren GT4s (more on that further down). 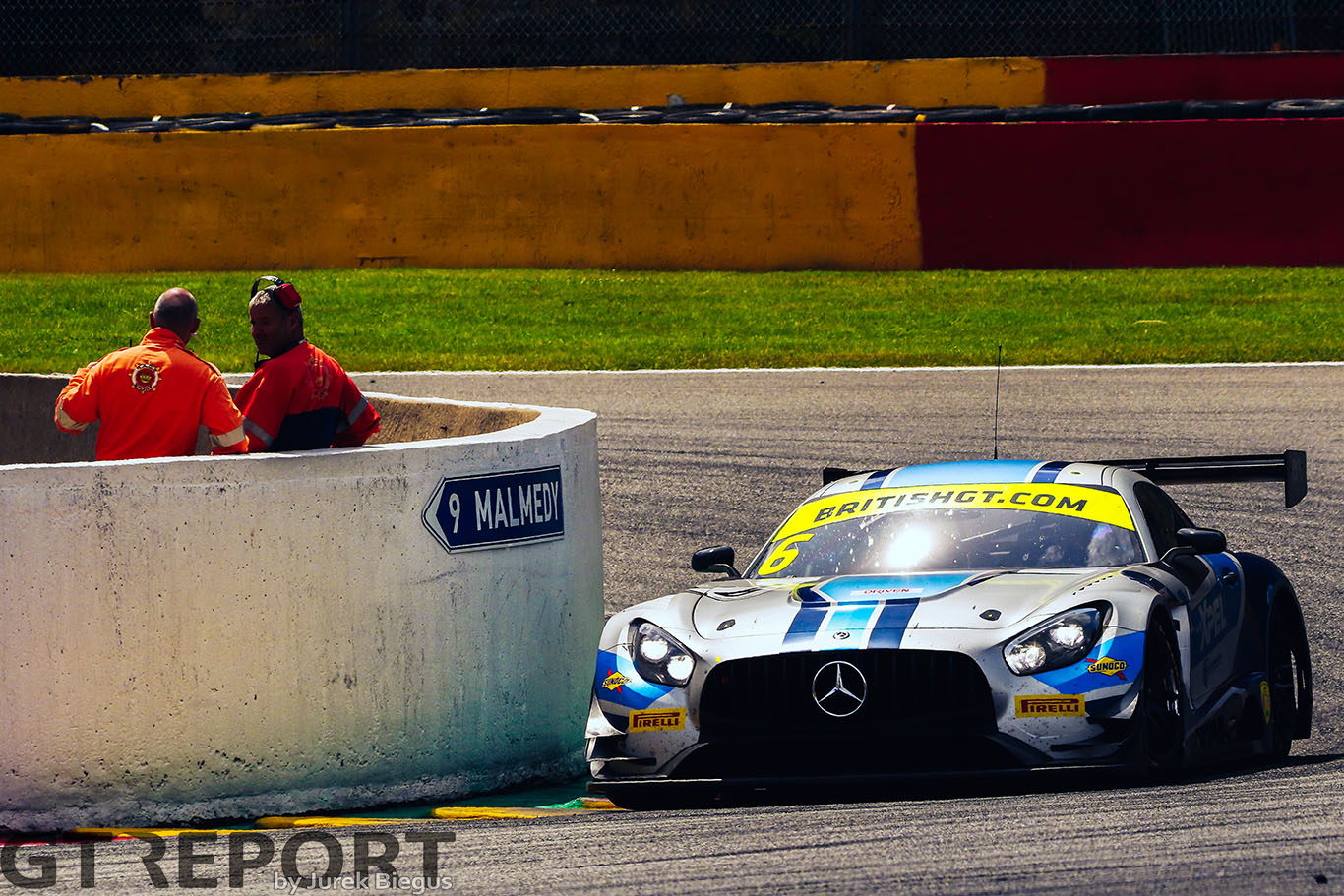 Fifth went to Nicki Thiim and Mark Farmer in the #2 TF Sport Aston. Farmer had been going strong in his stint, but lost time as he tried to go round the outside of Richard Neary’s Team ABBA Racing Mercedes at Les Combes. The Aston driver had the outside going into the right-hander which became the inside going into the left. However, Neary went deeper into the first part of the corner and made contact with Farmer, spinning Farmer round.

That fired up Thiim who quickly powered up through the field from the eighth-place Farmer had brought the car into the pits holding.

Getting past team-mate Jonny Adam, who seemed to slow momentarily going into the pitstop, he latched onto the back of Neary’s co-driver Adam Christodoulou and the pair became inseparable until the seven minutes to go mark. Thiim had a better run into Raidillon and had the outside line going onto the Kemmel Straight, with Christodoulou having to run wide in order to avoid contact with the Dane, Thiim took a comfortable fifth.

Seventh went to Sam De Haan and Jonny Cocker. De Haan was on fire – metaphorically – during his stint as he made his way back up the field after he was hit by Parfitt on the opening lap. Having made his way from the back of the field to eighth, Cocker could only make up a single place as he battled against the other Pro drivers.

Jonny Adam and Graham Davidson took eighth after a problem dropped them down the order somewhat in the closing stages. The pair had lost a couple of places with 40 minutes to go after they were given a 10-second stop/go penalty after Davidson was adjudged to have spun the G-Cat Racing Porsche at Les Combes. 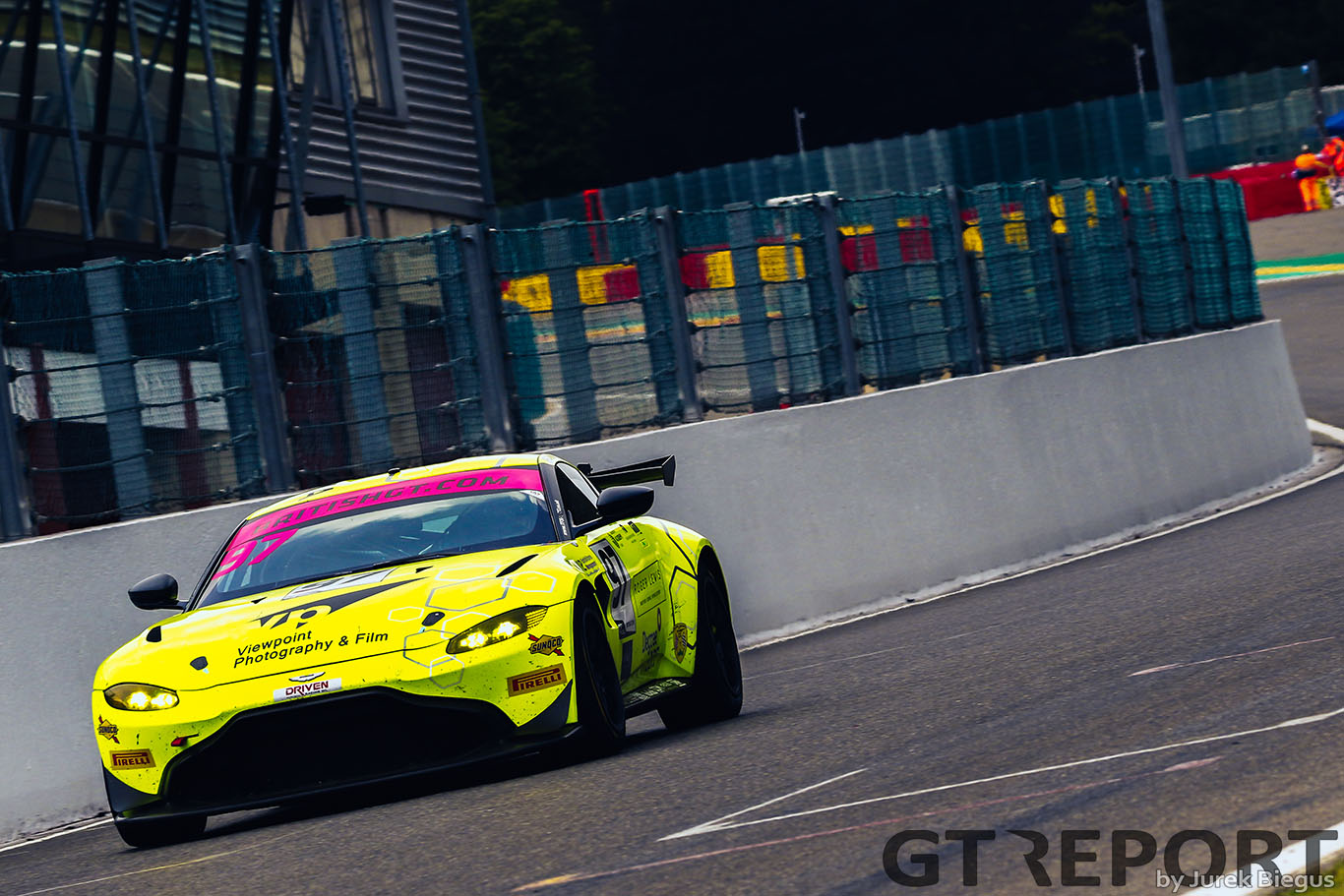 GT4 came down to last lap contact as Tom Canning, in the TF Sport Aston, came together with the Josh Smith-driven McLaren as the pair battled side-by-side into the Bus Stop. Smith ran deep into the corner, meaning Canning had to take to the run off and as the Vantage driver came back onto the track at the final corner he caught the side of the 570S, puncturing the McLaren’s radiator and forcing Smith into retirement as coolant spilled onto the track – eventually pulling the car off-track at the exit of La Source.

Right back in the first half of the race it was Smith’s co-driver James Dorlin who held a comfortable lead as the straightline speed of the British cars allowed him to pull away from Canning’s co-driver Ash Hand who was under pressure from team-mate Patrick Kibble and the fast starting Scott Maxwell in the Multimatic Ford Mustang.

While the front-end of the field remained relatively static, the pole-sitting Century Motorsport BMW M4 GT4 of Jacob Mathiassen was struggling to match the front-running pace. Losing two positions at the start, the Dane finished the first lap in fifth as a less than optimal set-up meant he couldn’t repeat his qualifying heroics from Saturday.

Going in the opposite direction was Jordan Collard in the second Tolman McLaren. Starting seventh, he battled his way up the field to be only trailing team-mate Dorlin by the time the pit window opened.

Despite running third for the majority of the stint – having been passed by the eventual race-winning TF Sport car – their team-mate’s demise allowed Dorlin – and team-mate Lewis Proctor to secure more vital points for their GT4 championship bid. 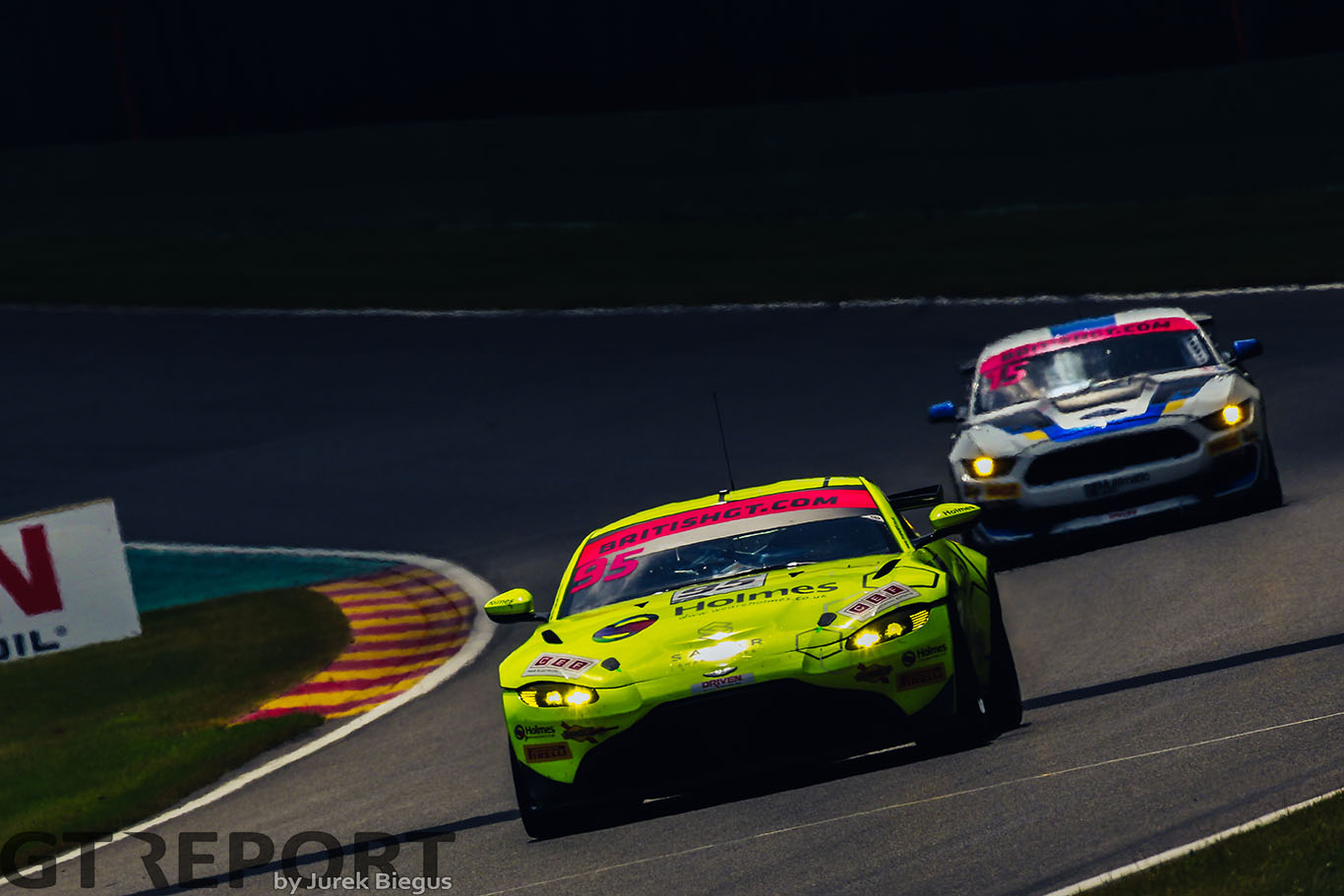 Their cause was helped by the retirement of Dean Macdonald and Callum Pointon in the HHC McLaren that came into the weekend in second. Having stopped on-track with a mechanical issue, Macdonald managed to limp the car back to the pits but was forced to retire.

Third in GT4 went to the Josh Price/Patrick Kibble TF Sport Aston Martin. Price had started the second stint in the lead, but lost a handful of places with 45 minutes to go as he dropped to fourth, but the late retirement for Smith promoted the pair back into the podium places.

Fourth – and taking Pro-Am honours – were Michael O’Brien and Graham Johnson. O’Brien blitzed the field in the second hour as he moved the Balfe-run McLaren 570S up from the lower reaches of the top ten and into the class win for the first time since the second race at Oulton Park.

The penultimate round of the British GT Championship takes place in two weeks’ time as the series crosses back over the channel for a two-hour race at Brands Hatch on 3&4 August. 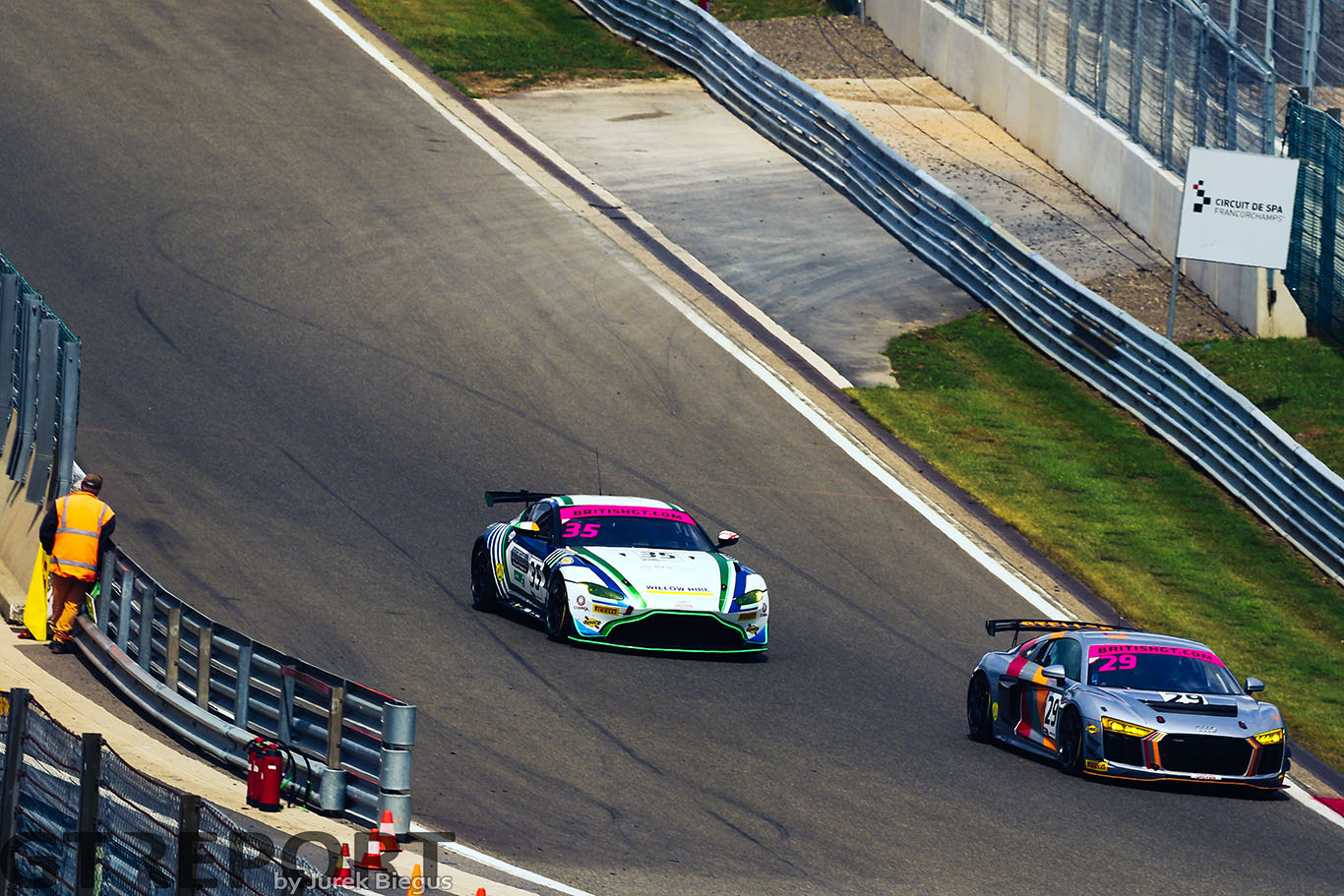 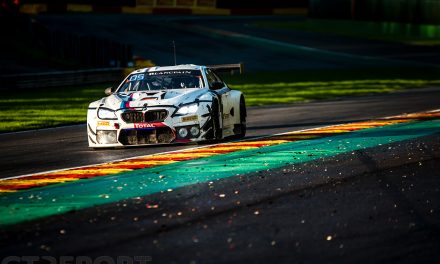