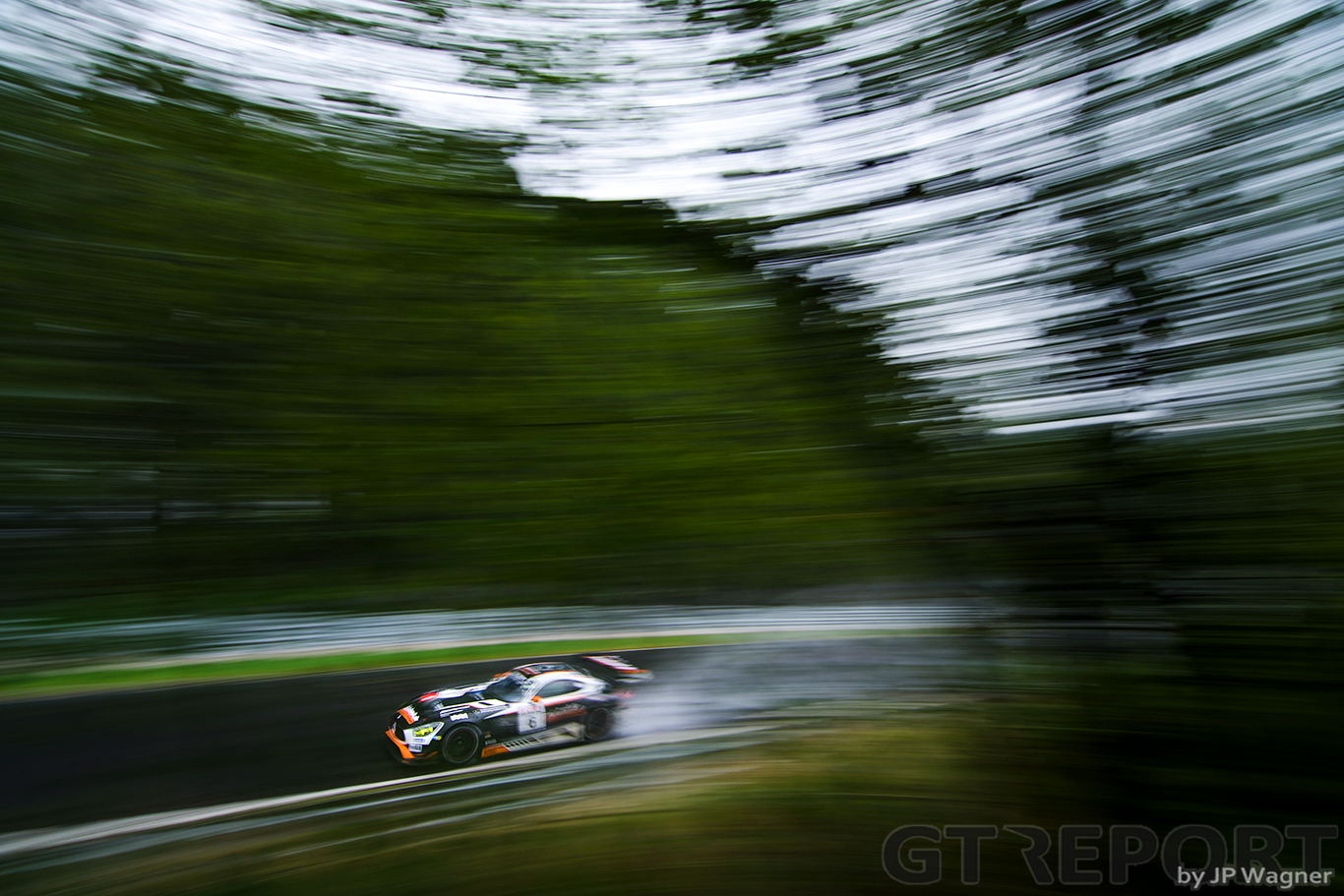 After missing the VLN 6-hour race to race in Asia, Manuel Metzger returned to the Nürburgring for his second win of the season. The driver of the #6 Black Falcon Team AutoArena Motorsport Mercedes-AMG GT3 immediately got back to his old ways by winning the 42. RCM DMV Grenzlandrennen.

It was a double duty race for the Nordschleife expert. While teammate Patrick Assenheimer took the start in the Mercedes-AMG GT3, Metzger raced the #57 Black Falcon Porsche 991 GT3 Cup MR to the green.

“The race with the Porsche began well,” Manuel Metzger says enthusiastically. “I could catch the Ferrari 488 GT3, but unfortunately had to let the Falken BMW by after two laps – he was a bit quicker while I was struggling a bit. 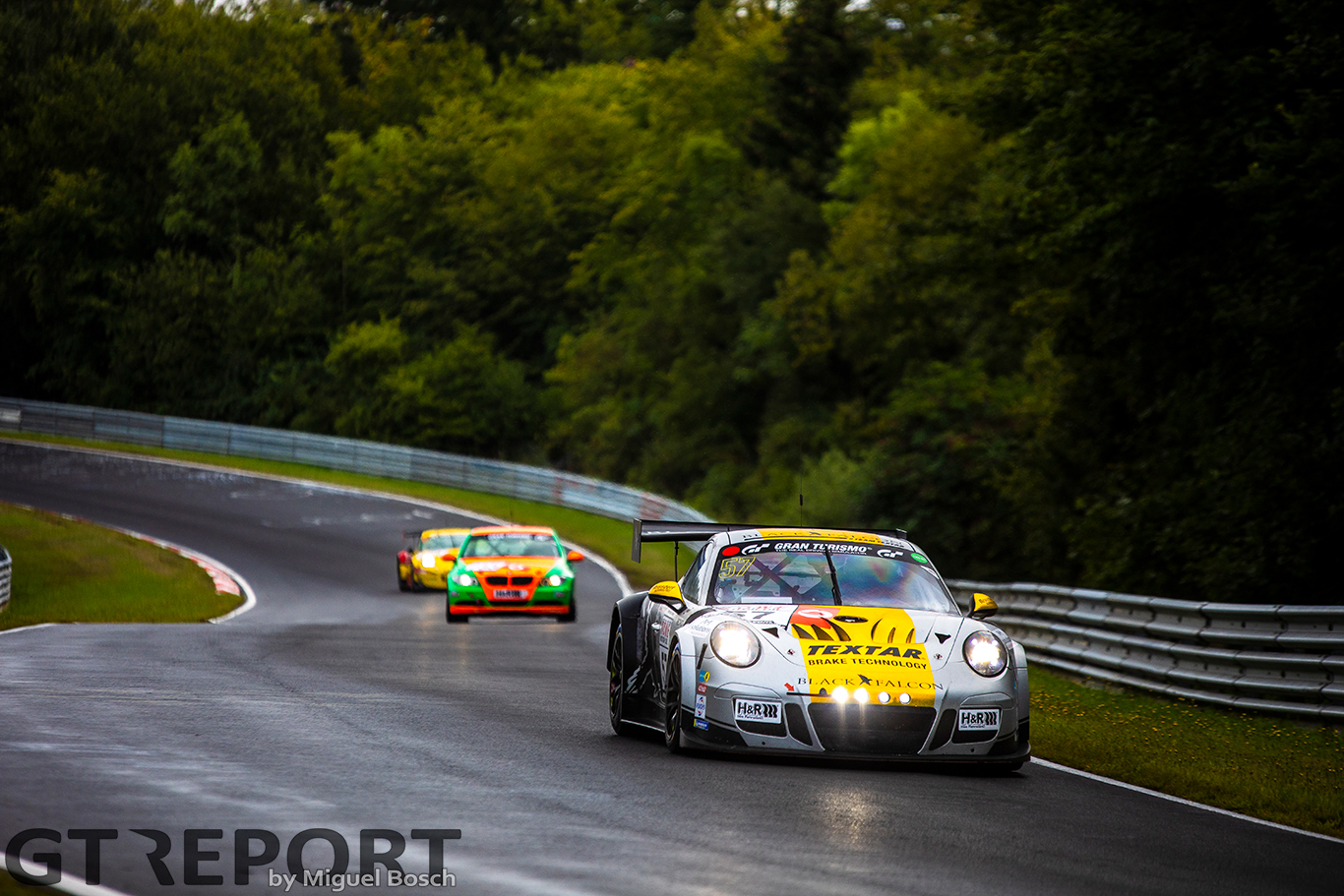 “We decided to go early on the slicks and I nearly spun ten times on the Grand Prix track with the slicks, it was really dangerous! But from Aremberg on the track was dry and it was good.

“Then we had other problems: Something was vibrating big time and we had to do an extra pitstop, then there was something wrong with the tyre pressure and do another extra stop. That’s where we unfortunately lost the race.”

After a short lunchbreak of a few laps, the German took over from Assenheimer in the AMG. In the pouring rain, race leader Kévin Estre in the #911 Manthey Racing Porsche 991.2 GT3R crashed which left Black Falcon alone at the head of the field. 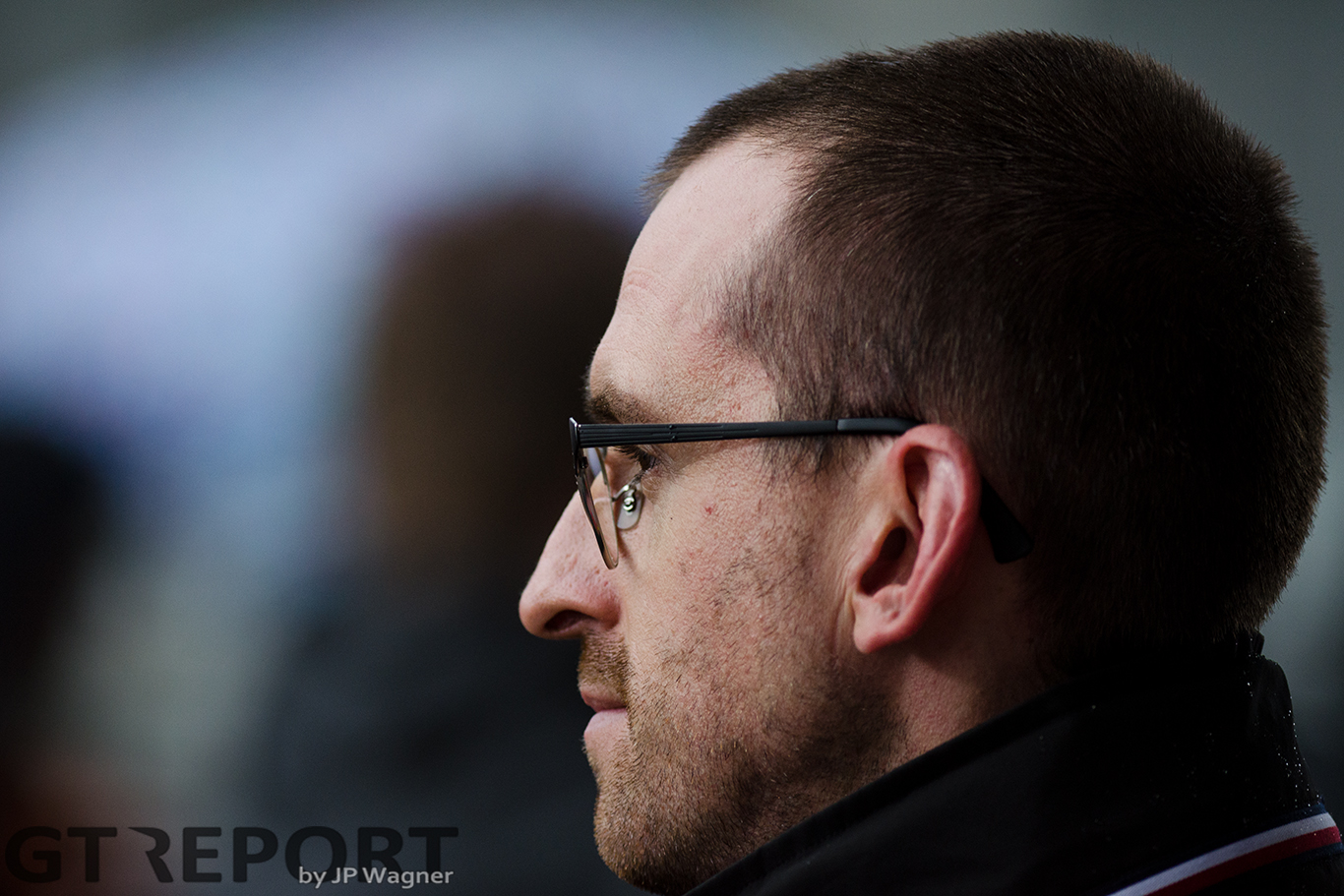 “It happened just on the lap when we decided to pit. There was so much rain that we said we’d pit, even though the Grand Prix track and up to Schwedenkreuz was dry. It was too dangerous to drive on slicks and it was the right decision at the right moment. It was Patrick’s call to switch and it worked out perfectly.

“While driving the Porsche I had no idea how the race was going for the Mercedes-AMG, what Patrick was doing. As I was getting into the car, they told me I had a two-minute lead. He did an amazing job and can be very proud of his driving. And hearing now – I didn’t know before that he passed Fabian Schiller and Frank Stippler – it’s just amazing, he can be really proud of his performance today.

“Patrick’s performance, like the last two races, was amazing and I just had to finish. It sounds very easy, but today it wasn’t with all the rain and the water on the track. I had a few moments where the car was aquaplaning, once even went into the barriers at Aremberg, but luckily there was no damage. So, you see, I knew I could take it easy, but you can still go off. 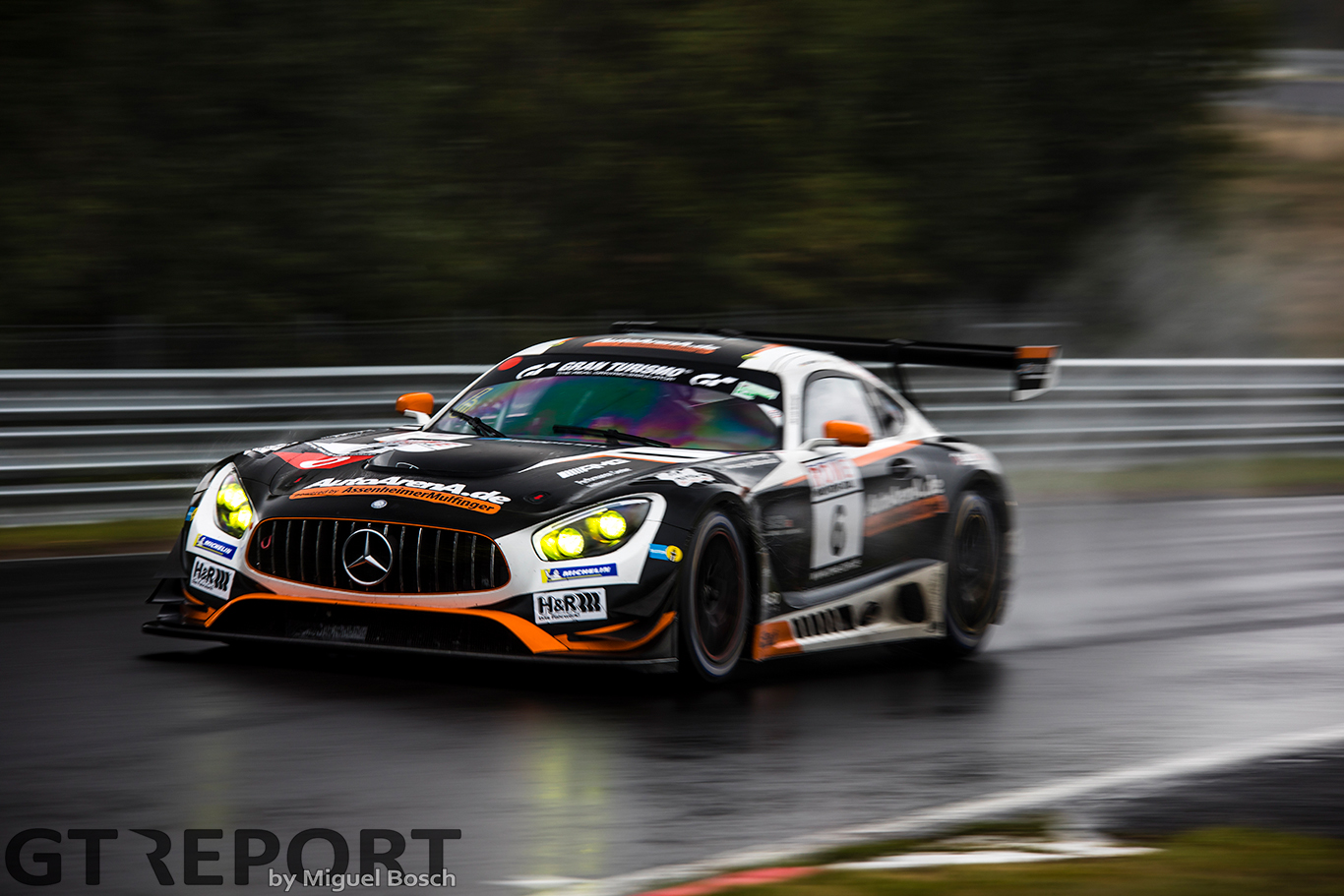 “We expected less rain in my first stint in the Mercedes, so the tyre pressure was too low which made it very tricky on the first set of tyres. On the second set it was better and then it was just bringing Patrick’s third victory and my second victory home for this season.”

Like co-driver Assenheimer, Manuel Metzger won’t be at VLN7 to make it four-in-a-row for Black Falcon either. Instead, the driver from Frauenfeld in Switzerland will wrap up a successful season in Blancpain GT World Challenge Asia hopeful of winning the title for teammate Récardo Bruins Choi – a title Metzger himself has to forego as he missed two races due to injury and the Nürburgring 24 Hours.

“[Solite Indigo Racing] want to continue with me for next year. We don’t know yet which series, but they are really interested. I will visit the team at the headquarters after the last race in Shanghai.

“When Patrick is doing his final race of the season in Blancpain GT in Barcelona, I’ll do my last race of the Blancpain GT World Challenge Asia and hopefully bring the title home for my teammate. After that, we’ll talk about next season.” 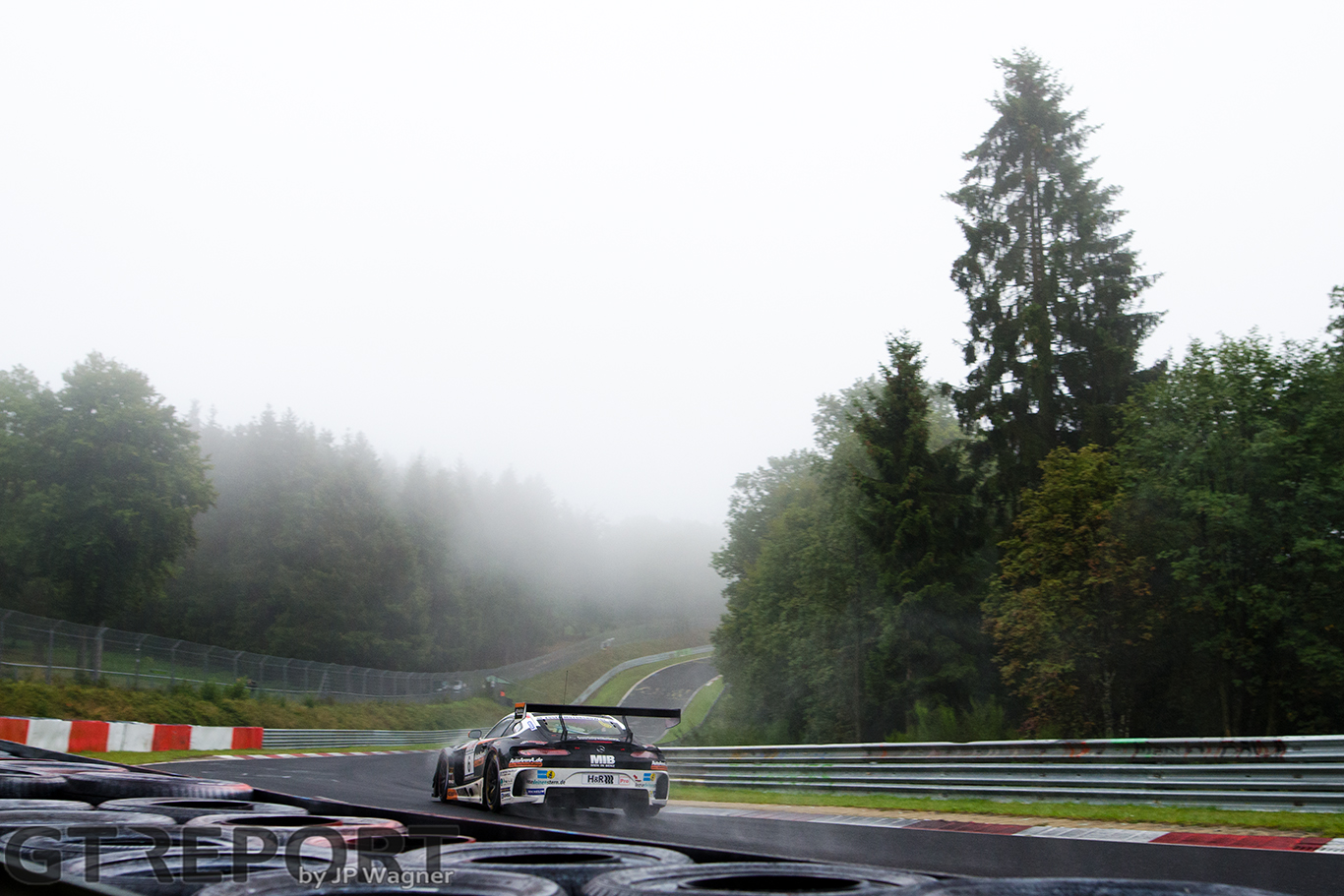 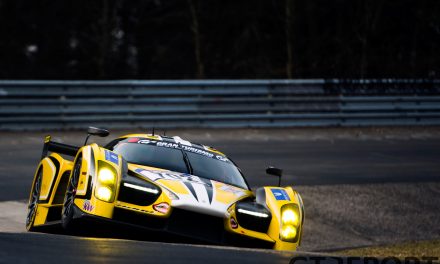 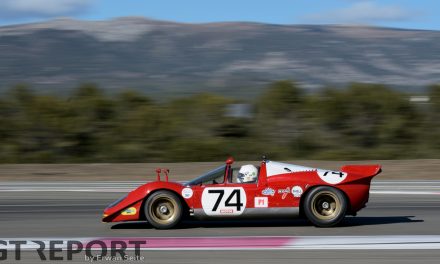 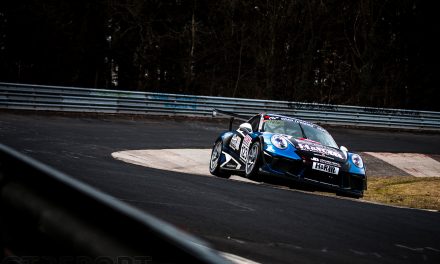 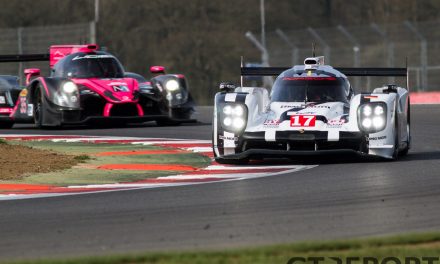