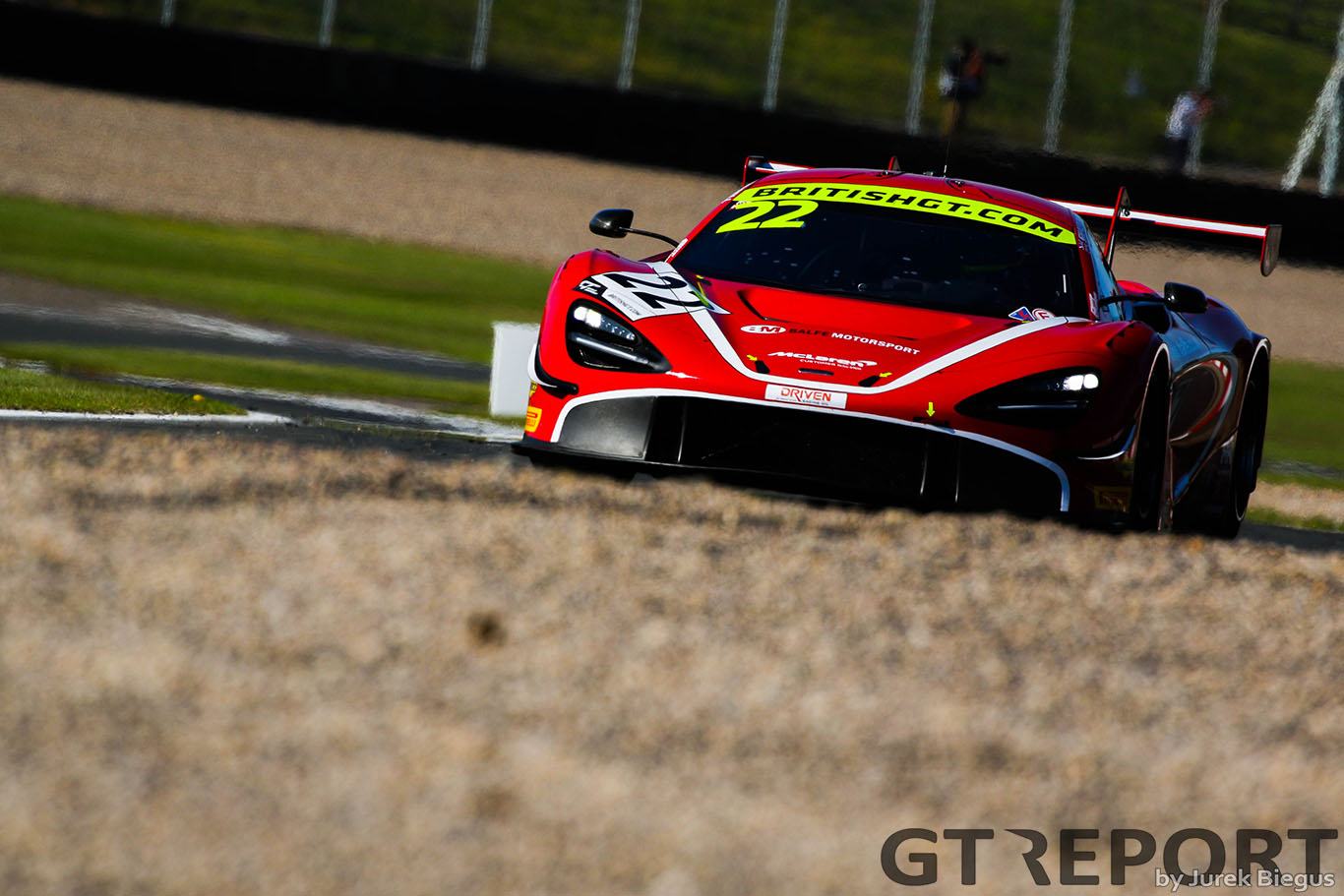 Balfe Motorsport and Steller Performance stormed to comprehensive pole positions in both categories as the leading lights in both class title battles squabbled at the sharp-end.

In GT3, Shaun Balfe’s early fastest lap in his eponymous team’s McLaren 720S GT3 set the championship outsiders as the ones to beat. His 1m27.714s was two-tenths faster than Angus Fender’s best effort in a Century Motorsport BMW M6 GT3 which had a turn-around in pace compared to the struggles the team has been going through in recent races.

That two-tenth lead became more than half-a-second as Rob Bell – McLaren Factory Driver extraordinaire – set a 1m26.667s to put pole beyond doubt. While Bell’s lap wasn’t the fastest in the session, Balfe’s Am lap meant it would have taken a lap record-breaking effort to have overhauled the McLaren team’s second pole position of the season.

While they’ve taken initial bragging rights in the five-way title battle, they’ll have to hope for a miracle to walk away with the title as their biggest rivals – championship leaders Phil Keen and Adam Balon – qualified alongside them on the front-row. 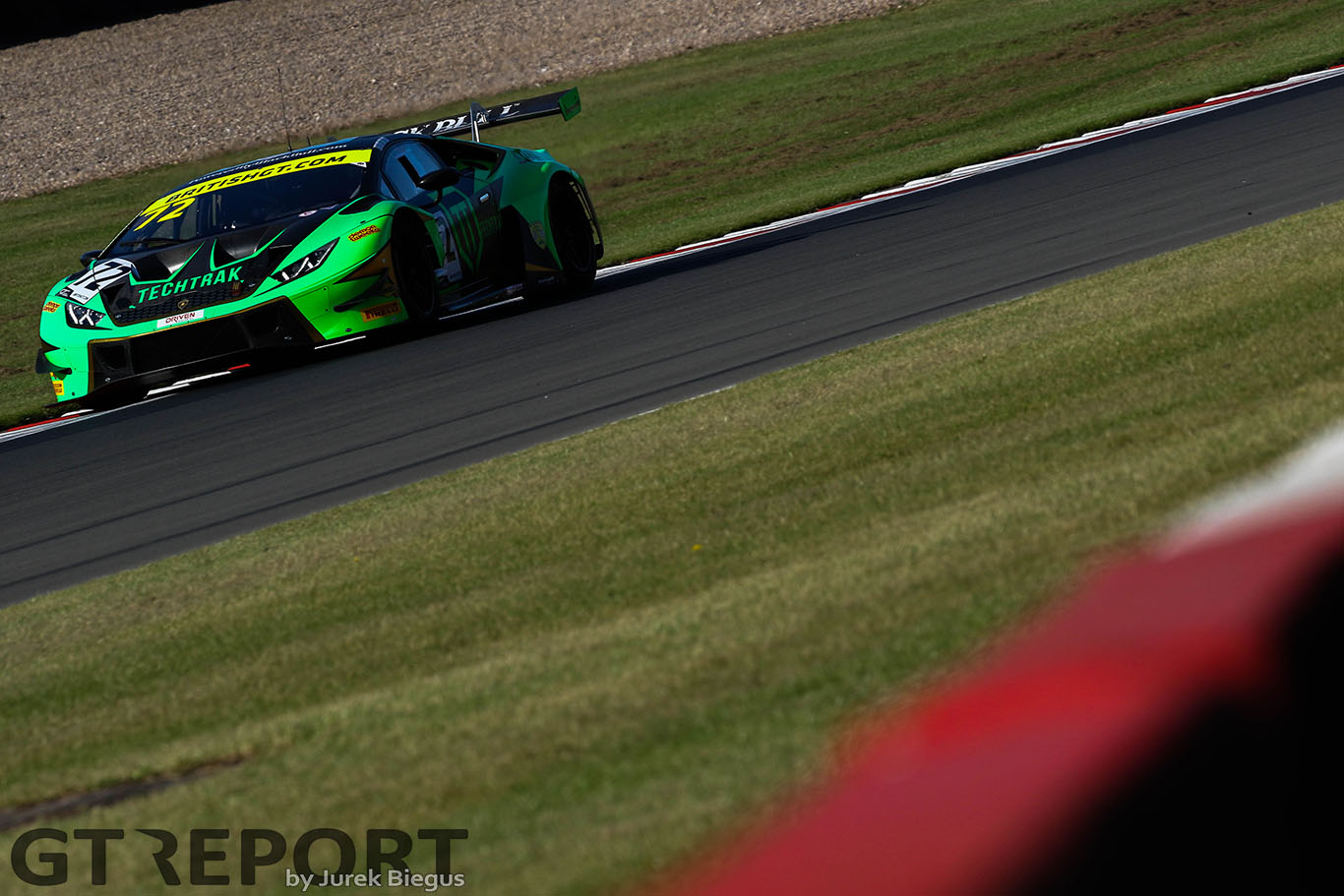 That’s despite Balon finishing just sixth in his session as the Barwell Motorsport Lamborghini Huracán GT3 Evo driver struggled to match the pace at the front. While he couldn’t power forward, Keen was on fire in the Pro session as he strapped on a new set of Pirelli tyres to set the fastest time in qualifying – a 1m26.518s to close to within 0.615s of pole.

Third in GT3 went to the RAM Racing Mercedes-AMG GT3 pairing of Ian Loggie and Callum Macleod despite the latter having an early lap deleted for track limits, the pair were fifth before the lap was removed with his next lap leaping them up to the second-row.

For the other championship contenders, they’ll have some work to do to fight to the front with Sam De Haan and Jonny Cocker lining up seventh in the second Barwell Lamborghini and the Optimum Motorsport Aston Martin duo of Ollie Wilkinson and Bradley Ellis lining up 11th after a tricky day for that Vantage, which was suffering with brake issues in free practice. 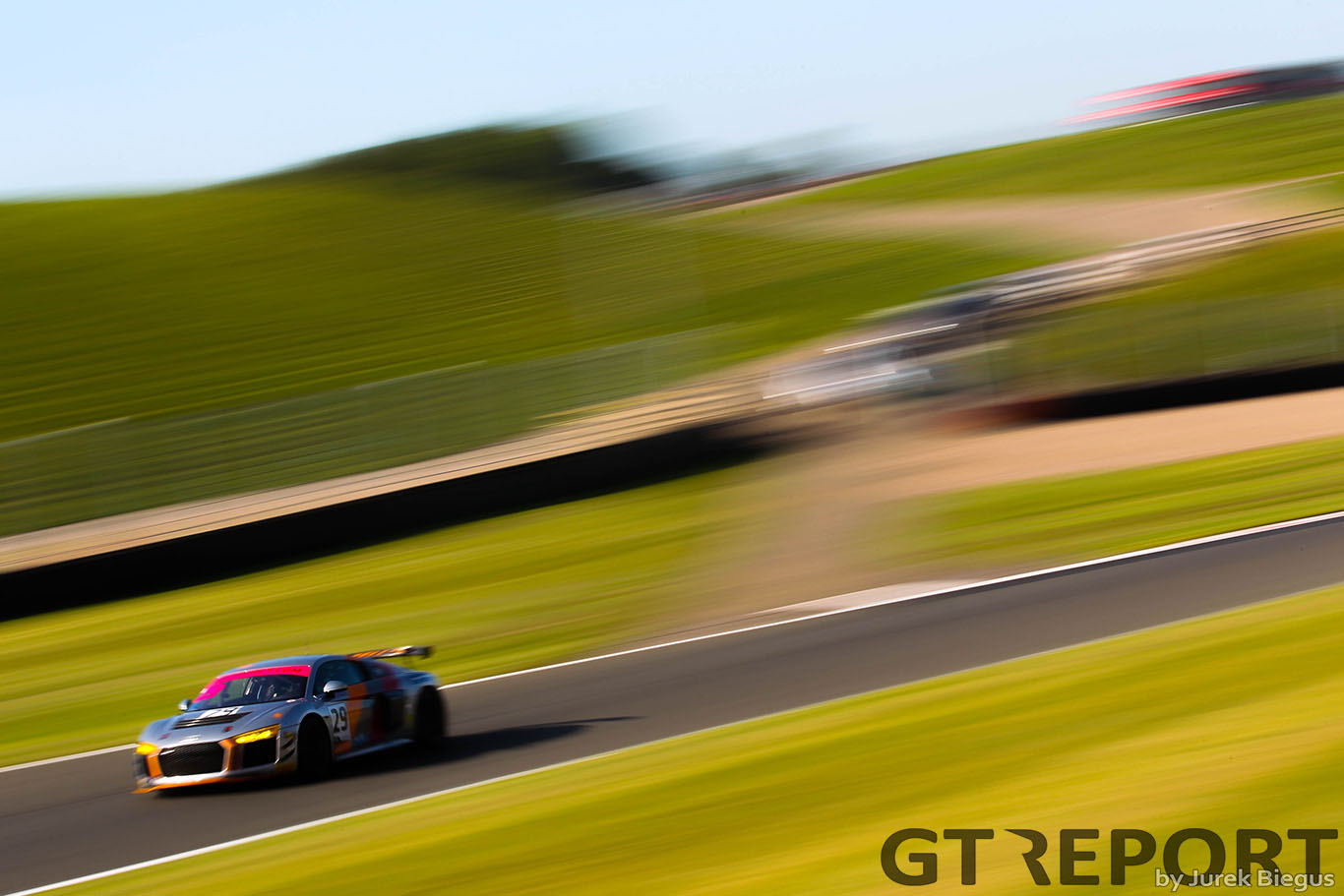 In GT4, the championship contenders were swarming behind the pole-sitting Steller Performance Audi R8 LMS GT4 of Sennan Fielding and Richard Williams.

The duo took their first pole position in British GT as the Audi – which stormed to victory in its maiden race at Snetterton – finally got back to the head of the field after a pair of storming laps for the pair of them.

After the session, Williams said: “It’s the last race of the season so we were giving it all we got and we know what we’re doing. It’s been a year of missed opportunities and we wanted to put that right. It is a brand new car for us and expectations were high after a great result first time out. It just shows how competitive the championship is – you need a perfect weekend to get the good results.”

Joining them on the front are the GT4 leaders Ash Hand and Tom Canning in the Aston Martin Vantage GT4 of TF Sport. They finished second in both their respective sessions to finish 0.376s down on the fastest time in the session. 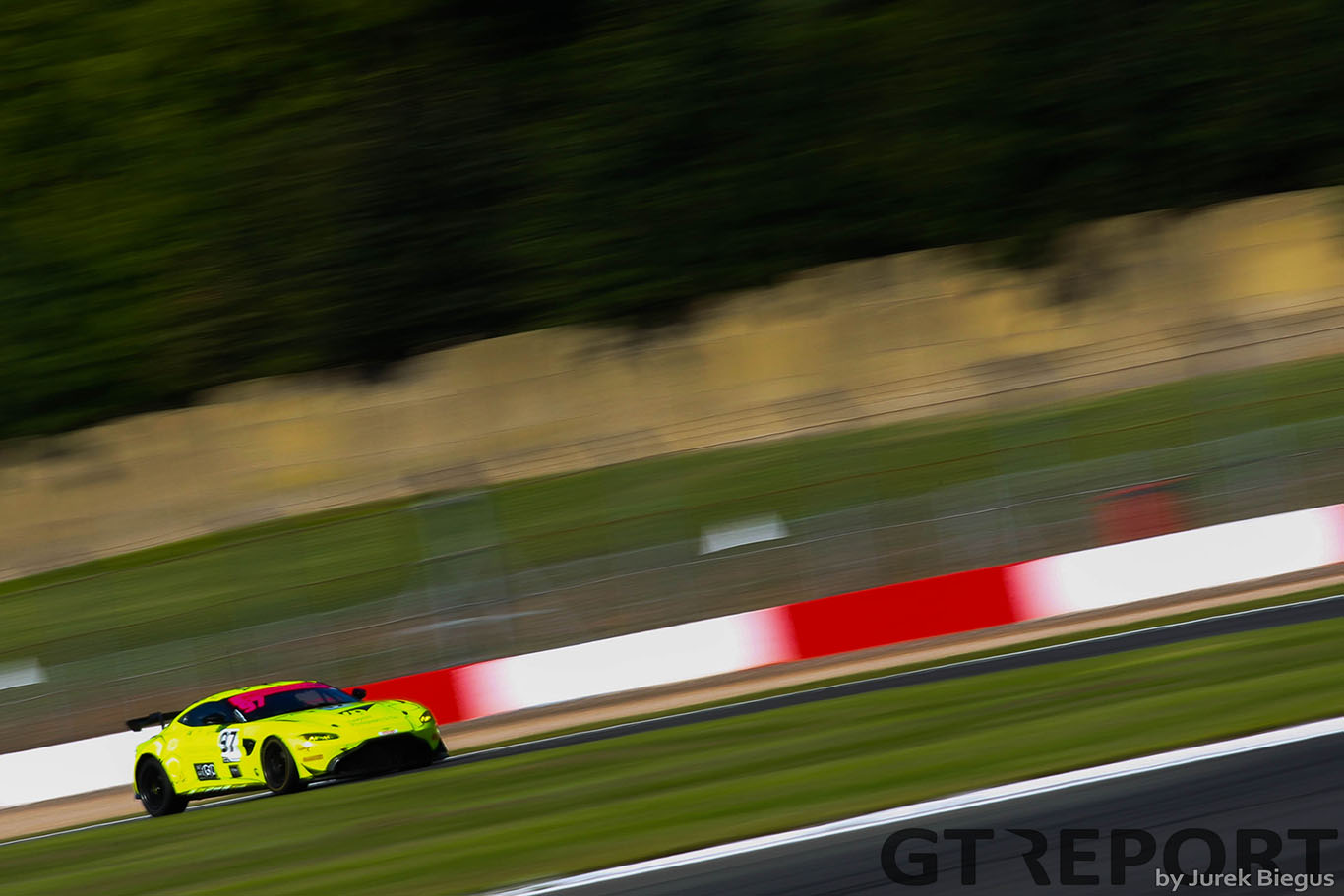 For Hand, following the sister car of Patrick Kibble got him his fastest lap of the Am session, but not because of the drafting benefits. He explained to GT REPORT that he was using Kibble as a target to aim at: “I always like something to chase. It means I’m looking a bit further ahead and really thinking about how I need to position the car and the best lines to take. It also helps if you’re chasing and you’re slowly catching the car ahead, it gives you an extra bit of pace and keeps up your motivation to continue chasing them.

“The lap itself was perfectly hooked up. The team have been on it all weekend – throughout practice and into qualifying. There were a few tweaks we had to make and that made the car even better.”

Third were title battlers Callum Pointon and Dean Macdonald in the HHC Motorsport McLaren 570S GT4. Macdonald had pulled the pair up to second, but Canning’s last lap – as the chequered flag came out – relegated them to the second-row by 0.047s.

The second TF Sport car finished in fourth, with Kibble and team-mate Josh Price finishing more than six-tenths behind Macdonald and Pointon, but only 0.102s ahead of third-in-the-championship Seb Priaulx and Scott Maxwell in the Multimatic Ford Mustang. 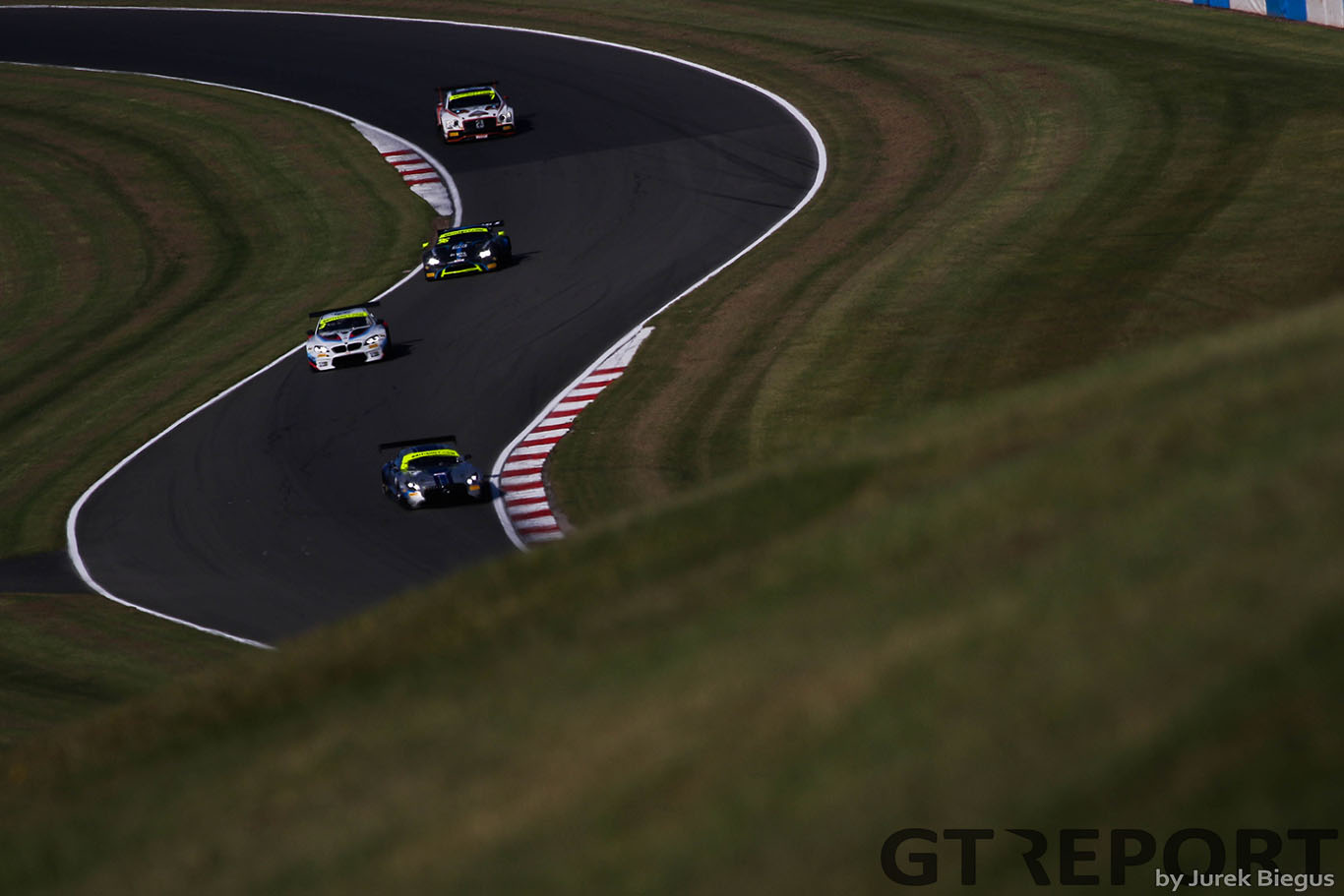 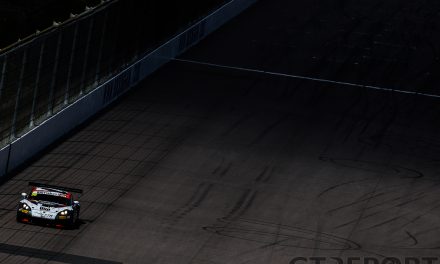 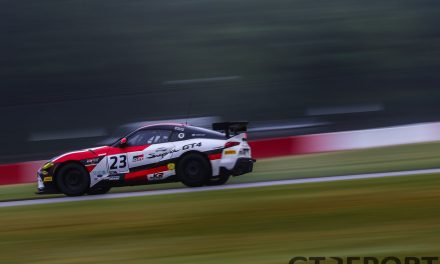 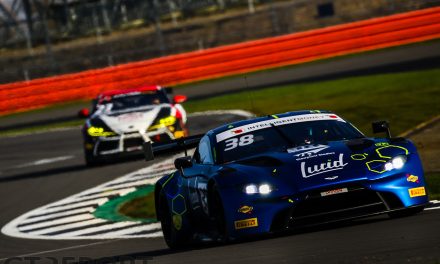 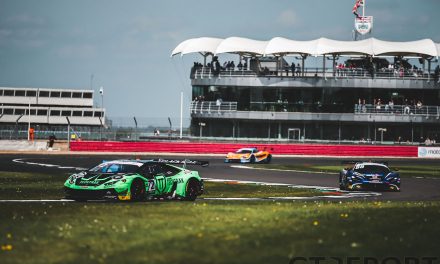