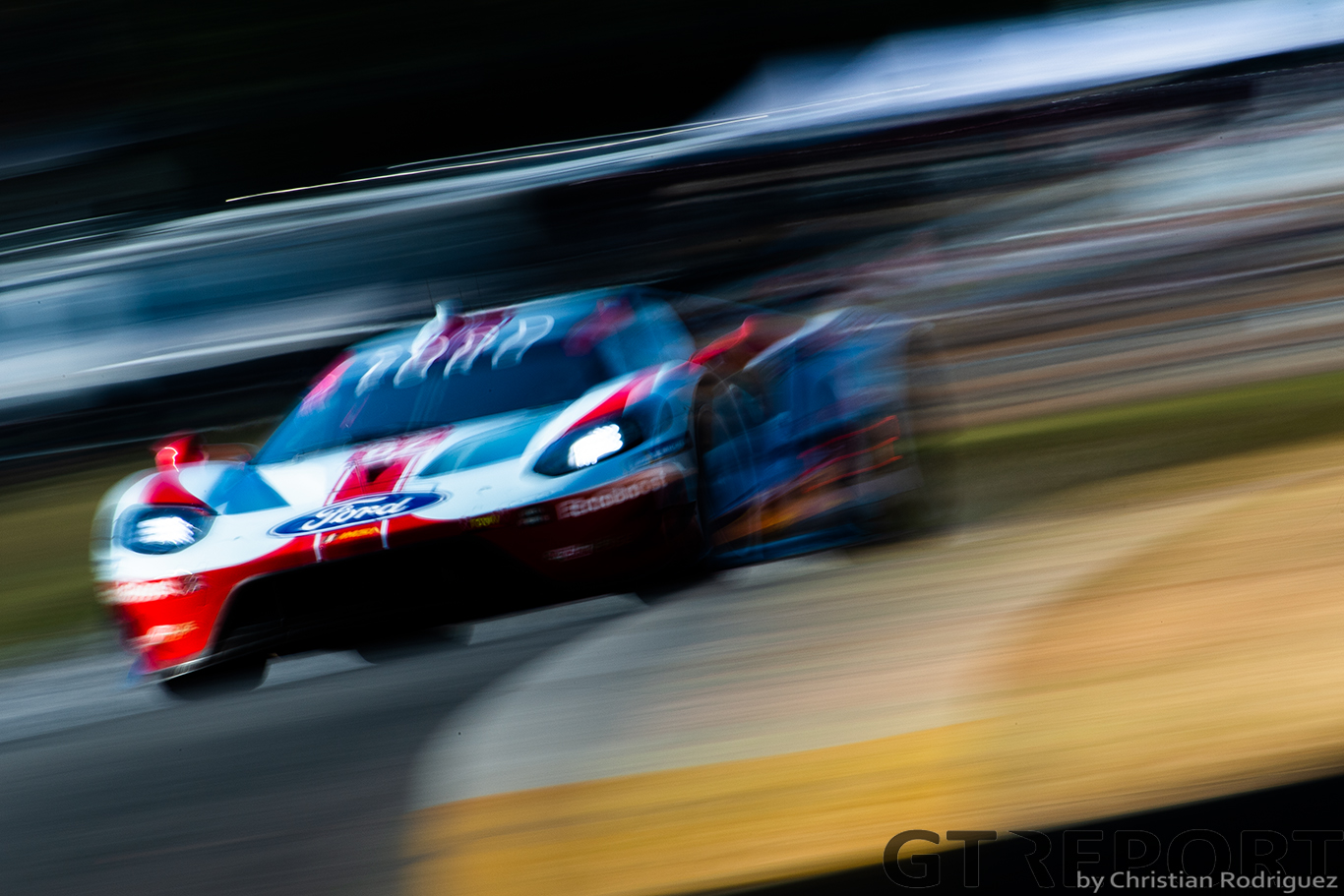 Action Express Racing leads the way after the first half of the 2019 Petit Le Mans after a faultless opening five hours for the team’s #5 Cadillac DPi.

GTD has played host to a remarkable rise through the ranks for the Turner Motorsport BMW squad, which has climbed from the back of the class to be leading with just five hours more racing at Road Atlanta to go.

In the top class, the Action Express team has marked itself out as the team to beat from the very start as Felipe Nasr powered the #31 from pole into a lead of more than 20 seconds in 90 minutes as Filipe Albuquerque – in the sister #5 – had no answer to the Brazilian’s lap record-breaking pace.

Nasr was pegged back halfway through the second hour, though, as the first of three full course cautions was called for after Helio Castroneves in the Team Penske Acura rear-ended the Performance Tech Motorsports Oreca of Cameron Cassels. The latter was recovering back onto the racing line after going over the kerbs to avoid Juan Pablo Montoya – in the second Penske Acura – and Castroneves didn’t anticipate his much greater closing speed, hitting the rear of the Oreca and sending it into the wall on the inside of turn four. 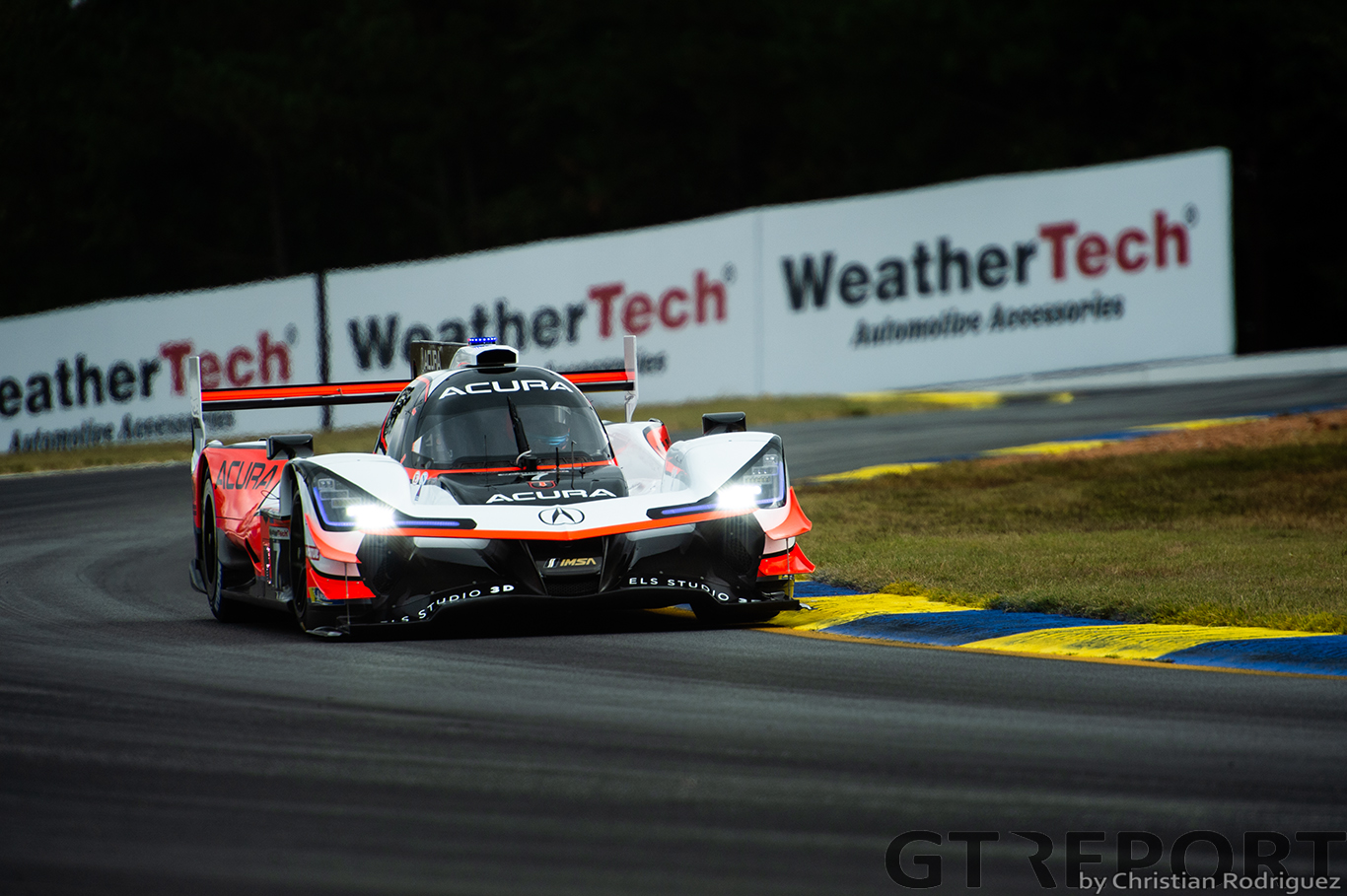 After the delay to recover Cassels, who was unhurt, and his Oreca, which had race-ending damage to the rear-left, Nasr controlled the restart to again have a comfortable lead while running a slightly different pit strategy to the #5 and the #77 Mazda Team Joest car.

As the hours ticked by though, Pipo Derani and Eric Curran – who took over the #31 – couldn’t replicate Nasr’s pace and as their pit strategy started to mirror that of their rivals, they slipped slightly down the order. A late overtake by Penske’s Dane Cameron – in the car he shares with Montoya – relegated Curran to fourth.

The Whelen Engineering car was replaced at the top by the sister #5 with Joao Barbosa holding off Timo Bernhard in the #77 Mazda as the German picked his way up through the order.

In GT Le Mans, Ford leads with the #67 of Ryan Briscoe, Scott Dixon and Richard Westbrook but the manufacturer was on course for a one-two until the final 20 minutes of the first half as Dirk Mueller lost control of the #66 at turn one and went nose-first into the gravel. The car was undamaged, but the squad lost three laps as the car was dragged out of the gravel.

The #66 dropping down the order promoted the Risi Competizione Ferrari 488 GTE – piloted by Le Mans class winners James Calado, Alessandro Pier Guidi and Daniel Serra – into second. The only Ferrari team in the GTLM ranks finished the first half just 1.5sec behind the Ford, having been unable to close in on Dixon after the restart to recover Mueller’s car.

Third is Tom Blomqvist in the BMW Team RLL M8 GTE. The #25 benefitted from a pitstop under the second caution period – to recover the #12 AIM Vasser Sullivan Lexus which had its steering broken after being clipped by Matthieu Vaxiviere’s JDC-Miller Motorsports Cadillac DPi – to put it on the same pitstop cycle as the two cars ahead. Blomqvist finished hour five 1.4sec ahead of Mathieu Jaminet in the #912 Porsche GT Team 911 RSR. 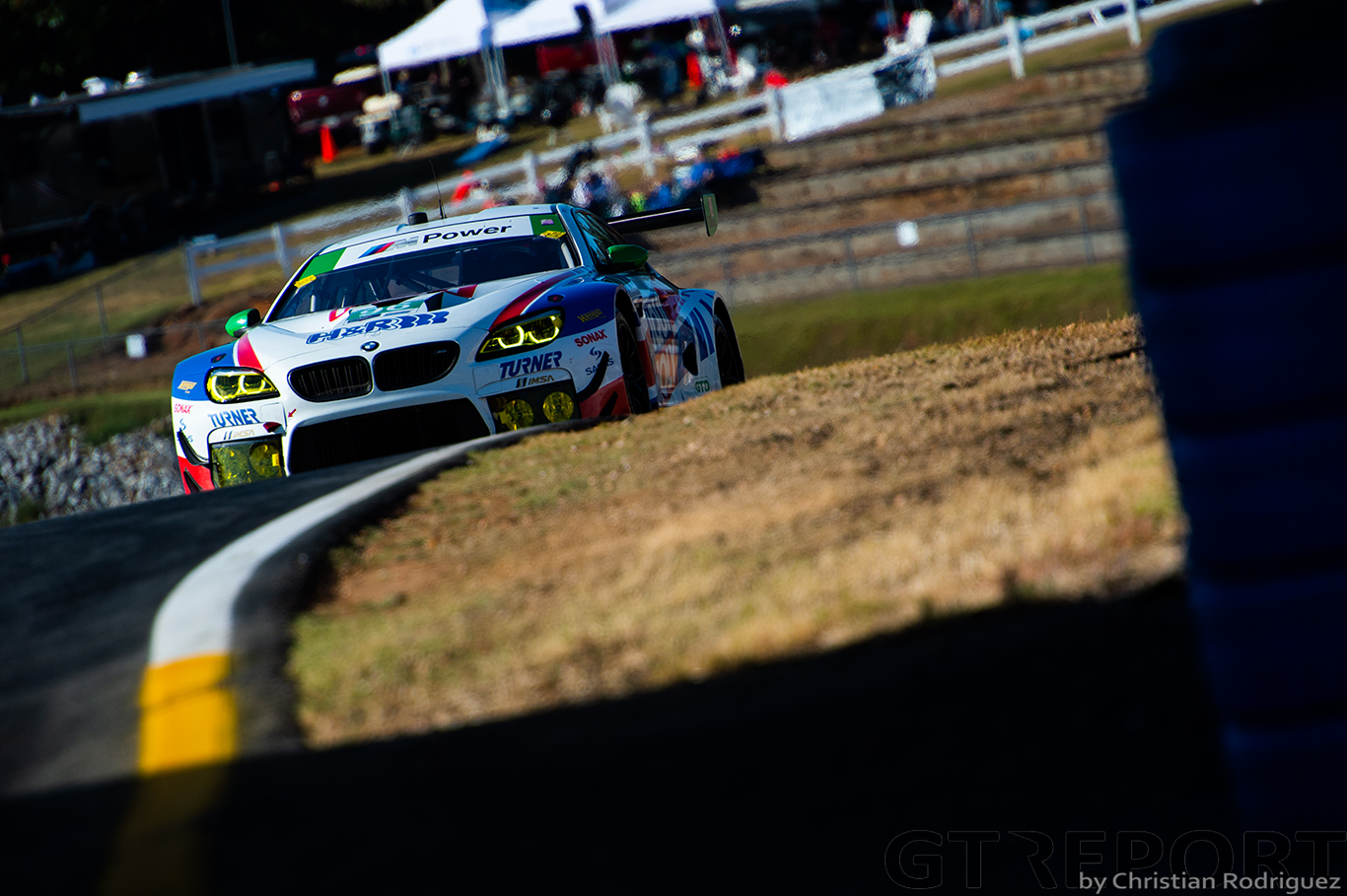 Better fuel mileage for the Turner Motorsports BMW M6 GT3 allowed Robbie Foley to claim the lead of the GT Daytona class after five hours of powering up through the field after failing to set a lap time in qualifying after Foley beached the car in the gravel at turn 10.

Riley Motorsports prevailed in a lengthy battle with Scuderia Corsa to sit in the runner up spot with five hours to go. After a strong start from Ben Keating, Felipe Fraga took over the Mercedes-AMG GT3 and started to put Cooper MacNeil in the Ferrari 488 GT3 under pressure as the pair battled at the head of the field.

Despite MacNeil initially moving ahead with a great dive up the inside of Fraga going into turn 10a, the latter battled back and handed the car back over to Keating with an advantage of 9.6sec over the Ferrari squad.

The Pfaff Motorsport Porsche lies in fourth, less than half-a-second behind Scuderia Corsa but the same distance ahead of Katherine Legge in the Meyer Shank Racing Acura NSX.

The sister Meyer Shank Acura – the #86 which was last driven by Justin Marks – finished the first five hours in the pits with the team inspecting the engine as the car headed into the pits with smoke billowing from its rear.

In LMP2, just the PR1 Mathiasen Motorsport car remains in the class after Performance Tech’s earlier retirement. However, the PR1 Oreca was pushed behind the wall late in the first half as the team diagnosed a technical issue with the car. 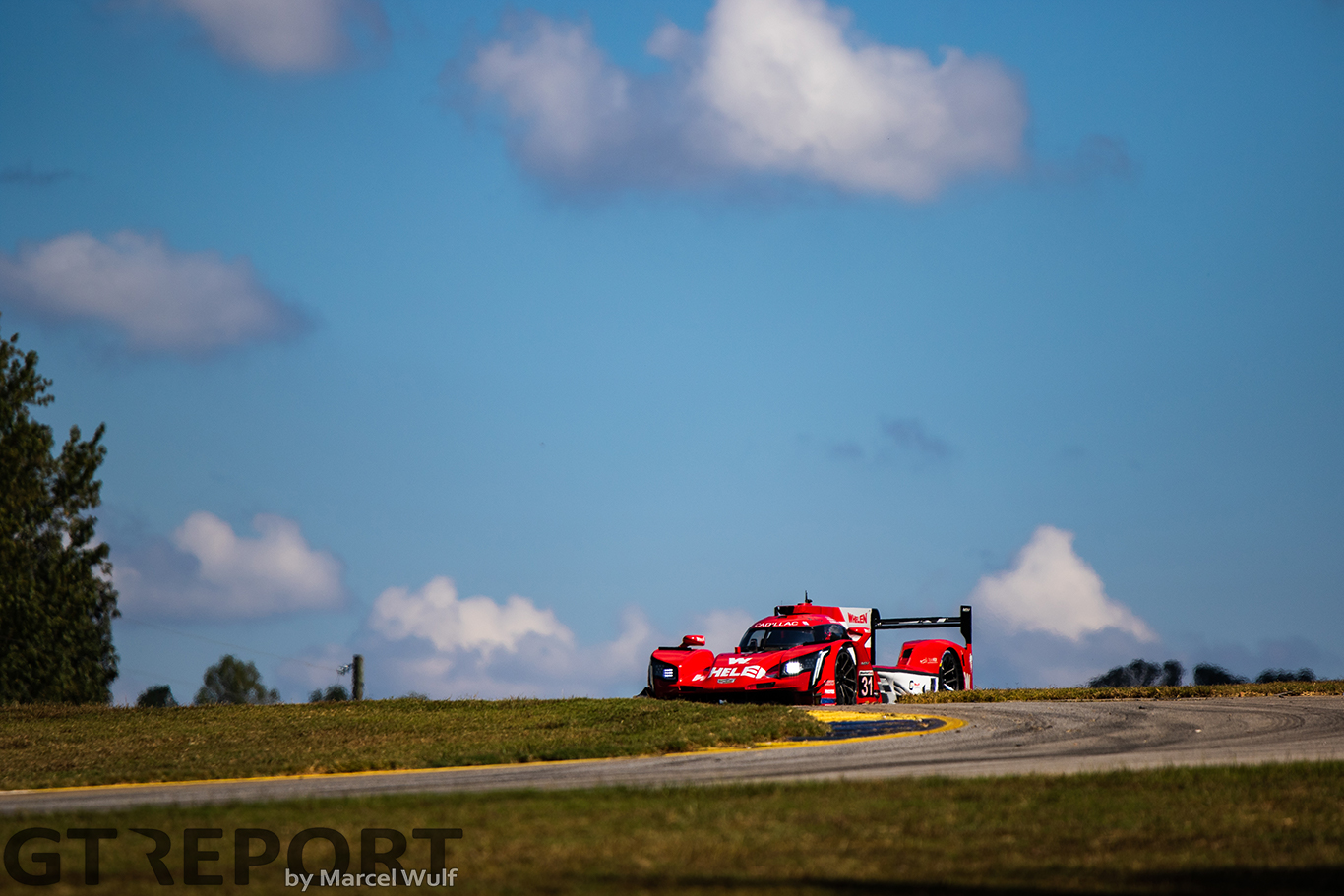 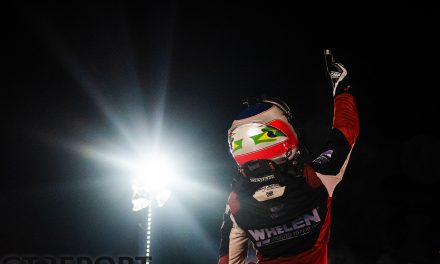 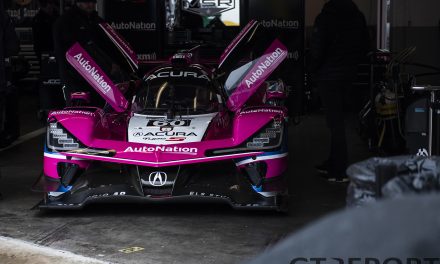 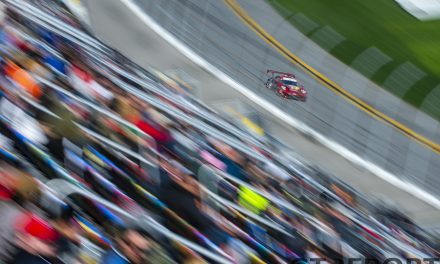