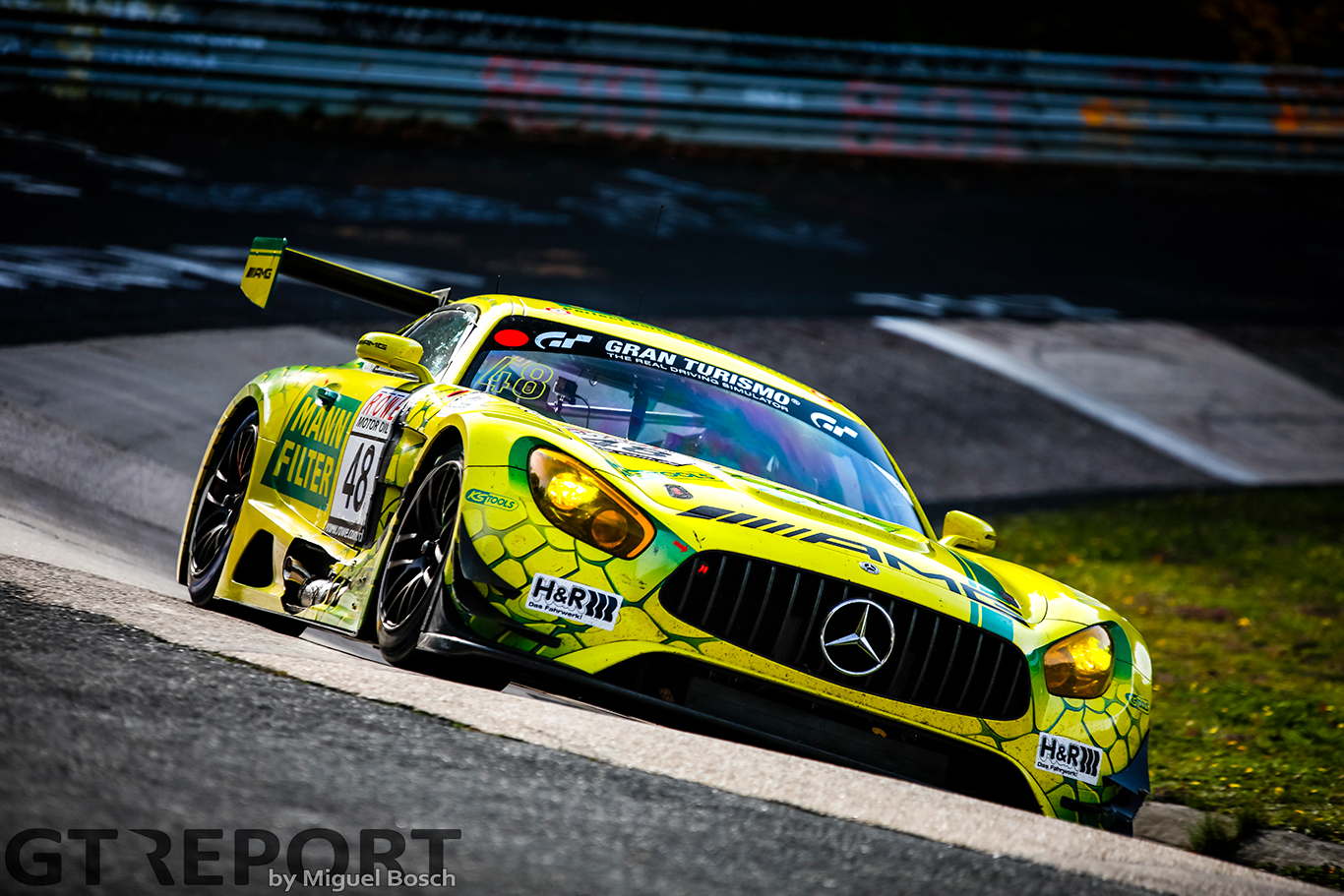 Competition did not seem an issue in the 51. ADAC Barbarossapreis as HTP Motorsport took a nearly unopposed victory. Spearheaded by Raffaele Marciello, the #48 HTP Motorsport Team Mann-Filter Mercedes-AMG GT3 grabbed the lead on the second lap and never looked back.

Before Marciello drove off to a 48-second gap at the end of his double stint, things looked quite grim for the German squad. At the initial start, Marciello suffered what could have been race-ending damage to the car. However, an incorrectly performed red flag procedure gave HTP Motorsport the possibility to repair the damage and allow ‘Lello’ a do-over.

“The first start was a big mess,” Raffaele Marciello said. “I sustained a damaged exhaust, so we were lucky with the red flag and able to repair the exhaust – the team did a really good job with it.

“Then I had a good start at the next one and could almost pass the BMW, but it was too difficult. At Mutkurve I managed to overtake it – it was quite a nice move, but they weren’t super quick on the straights. I don’t know if they really went for it; I can’t tell how much they were trying as compared to us. 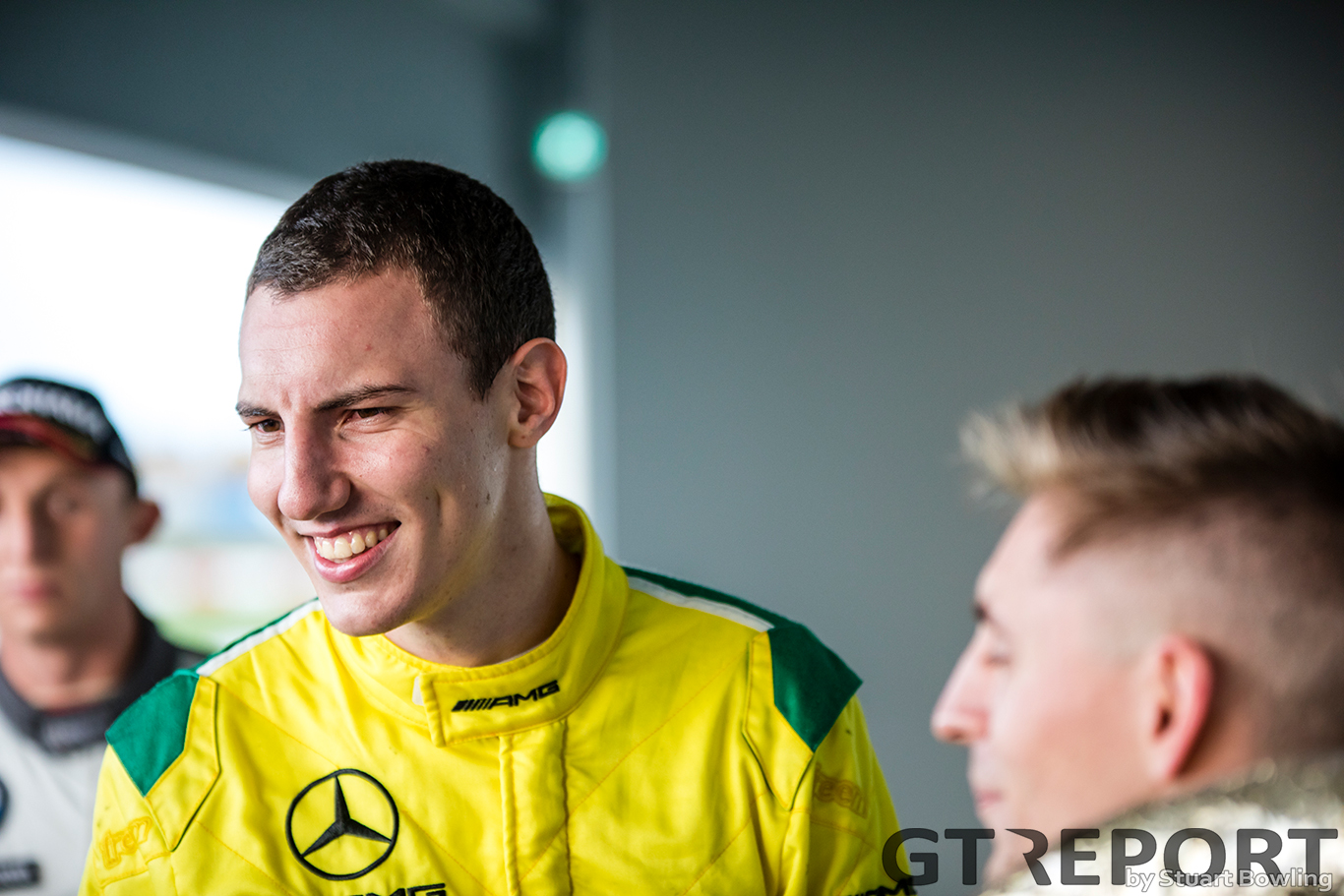 “We really went flat-out every lap and got a big gap. This wasn’t a really big surprise: We were quick at the 24 Hours, racing in the top 3 and fighting for the victory, so it was just a matter of time and when you race with guys like Götz and Buhk it’s always easier. I hope to be with them next year at the 24 Hours because I think it’s time to try to win it.”

“I think the others didn’t push enough,” the AMG works driver continues. “You never know in VLN what the others are doing. We went for it; we went as quick as possible and today it was enough.”

In a season where victories have been few and far between, the Zürich-born Italian recons it’s simply been bad luck that has kept him from fighting for the prizes, feeling his own performance was on target. 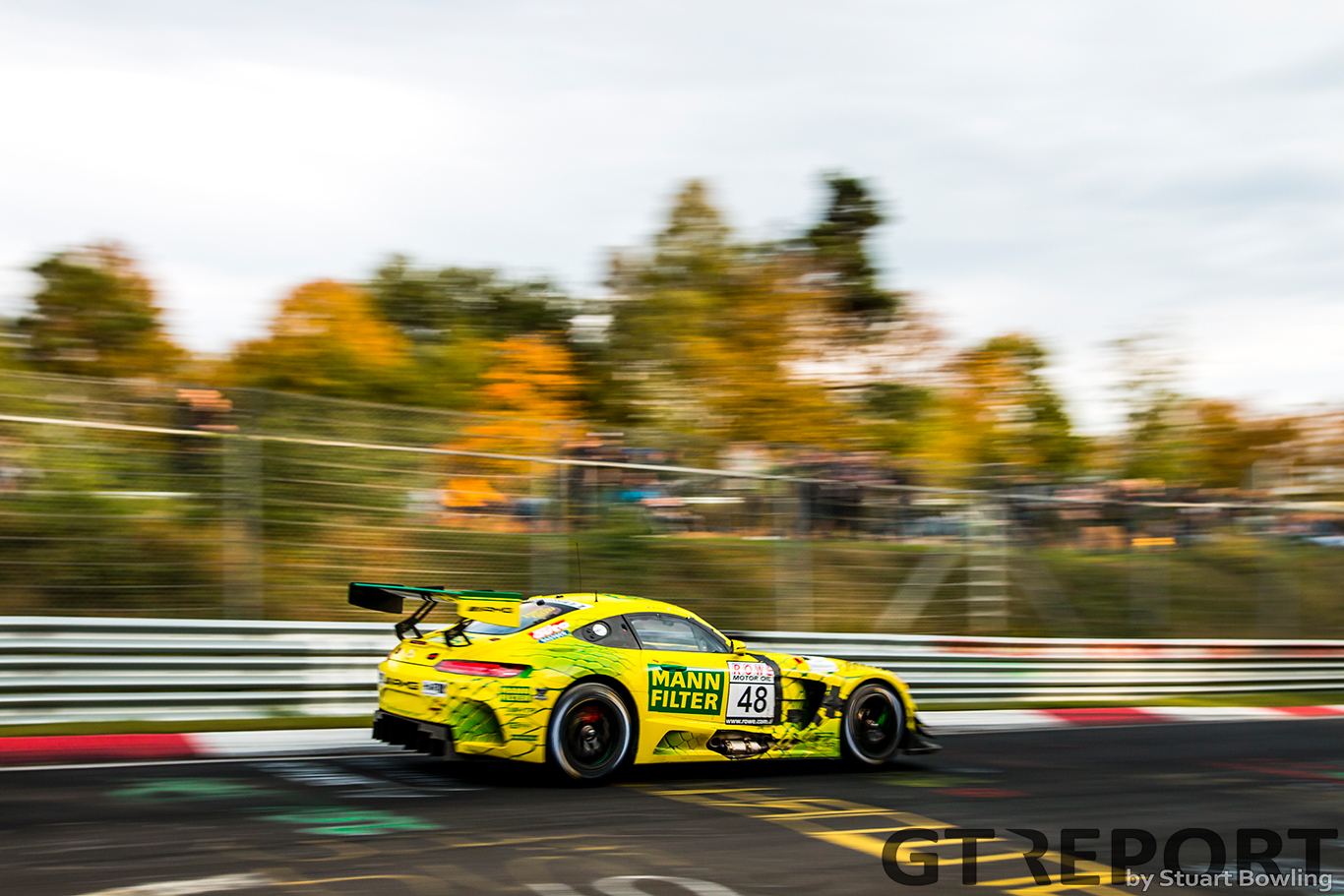 “It’s been a bit unlucky in Blancpain GT Sprint. We lost the race in Misano when we were in the lead and in Brands Hatch we were second when we had a problem. Without those two problems we maybe would’ve been fighting for the victory in the championship.

“I don’t have much to say about Endurance: We had many zeros, many incidents, so that was a bit of a pity. But we did finish third in Bathurst, second in Laguna Seca, second in Suzuka, and Maxi is in the lead for the Intercontinental GT Challenge.

“From a personal view, I always went quick, always had nice races. You don’t always like the result because it’s a team sport, but for me personally it went pretty well.”

With the end of the season approaching, Marciello is looking to finish the Intercontinental GT Challenge on a high at Kyalami: Bringing Mercedes-AMG and GruppeM Racing co-driver Maximilian Buhk the manufacturers’ and drivers’ championships. 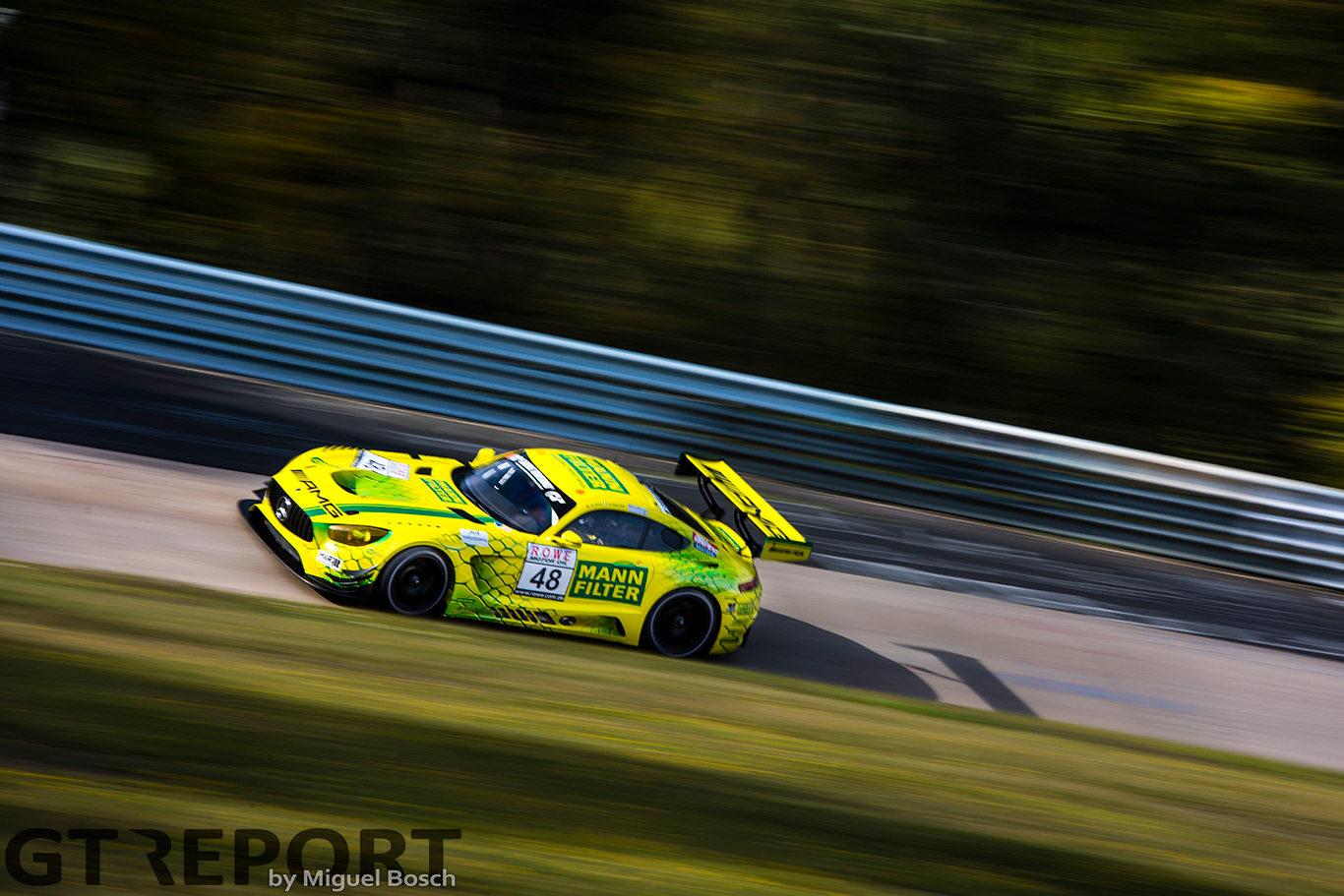 “I know GruppeM from Blancpain GT Asia last year and I really like them, I always get along with the team and the car is pretty good. When they do a line-up with Maro Engel, Maxi Buhk and myself, you know the result is there because they are two of the best AMG drivers. You know that when you’re with them, at whatever team, you will bring the result because it’s the best package you can do.

Programs for the remainder of this year and 2020 aren’t finalised yet, but the 4-time veteran of the Macau Grand Prix and this year’s Bathurst 12 Hour podium finisher hopes to be back on the grid for the off-season races.

“Maybe I’ll race in Macau, we are still looking at this. I did it the last two years so if I’ll do it again, I’ll be happy, and if not, then maybe VLN9. I don’t know, I can go anywhere!

“I’ll be with AMG again next year and we will see where I’ll race. I hope we’ll race at Bathurst with the new car, but there are always the regulations [to be considered]. If we won’t, the old car has always been good.” 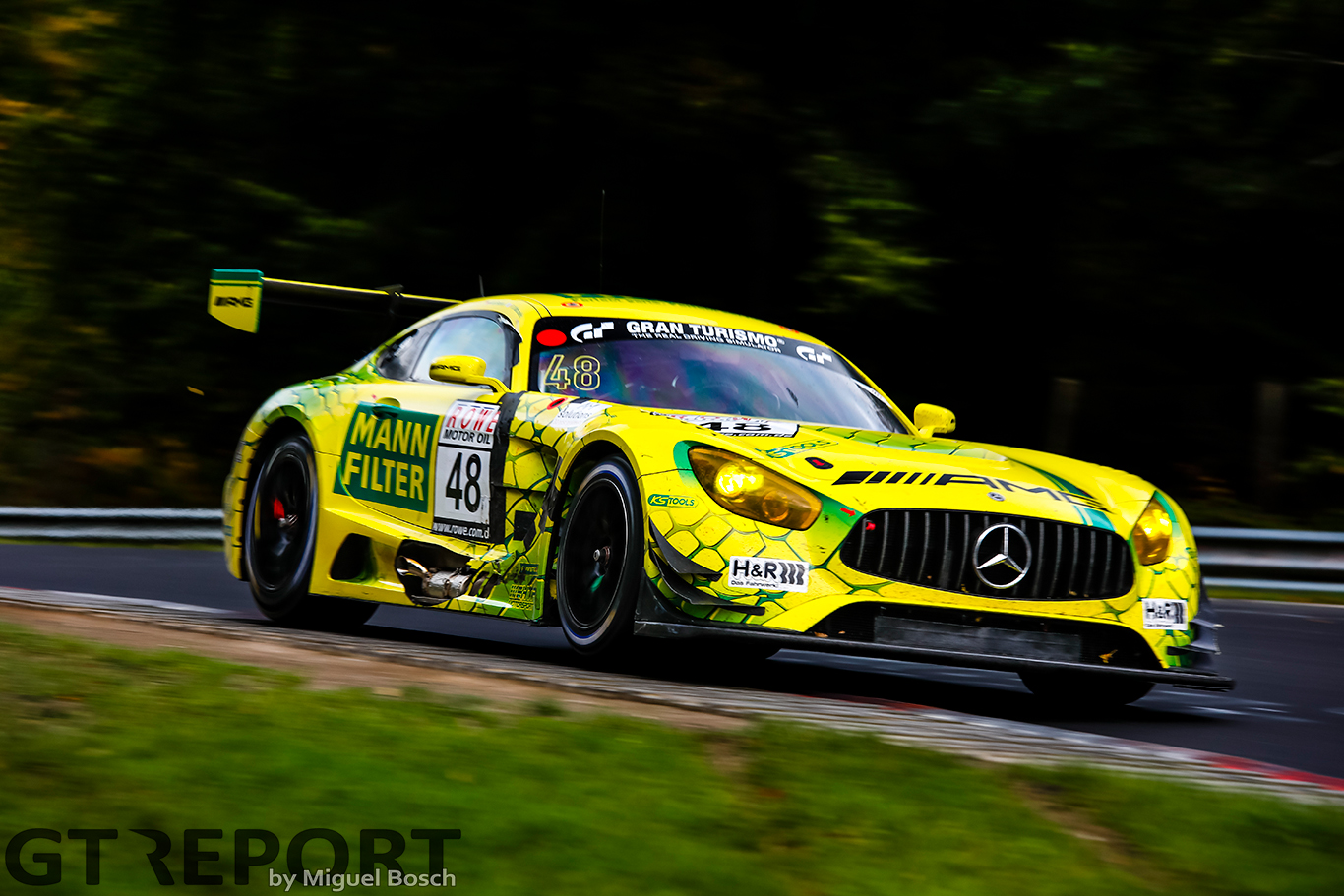 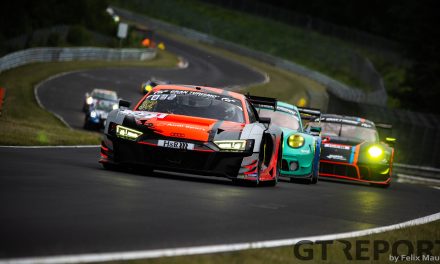 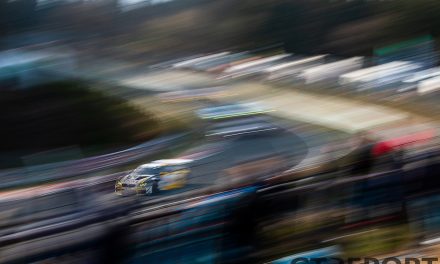 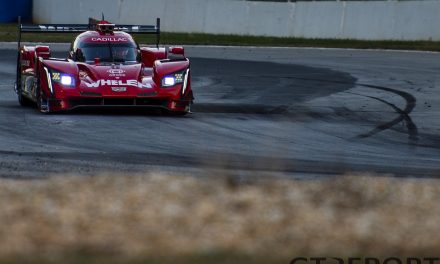 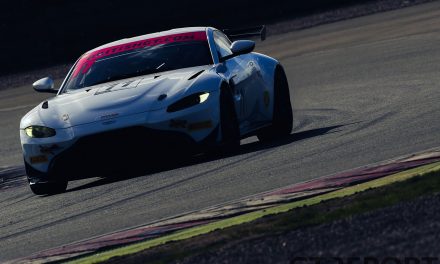