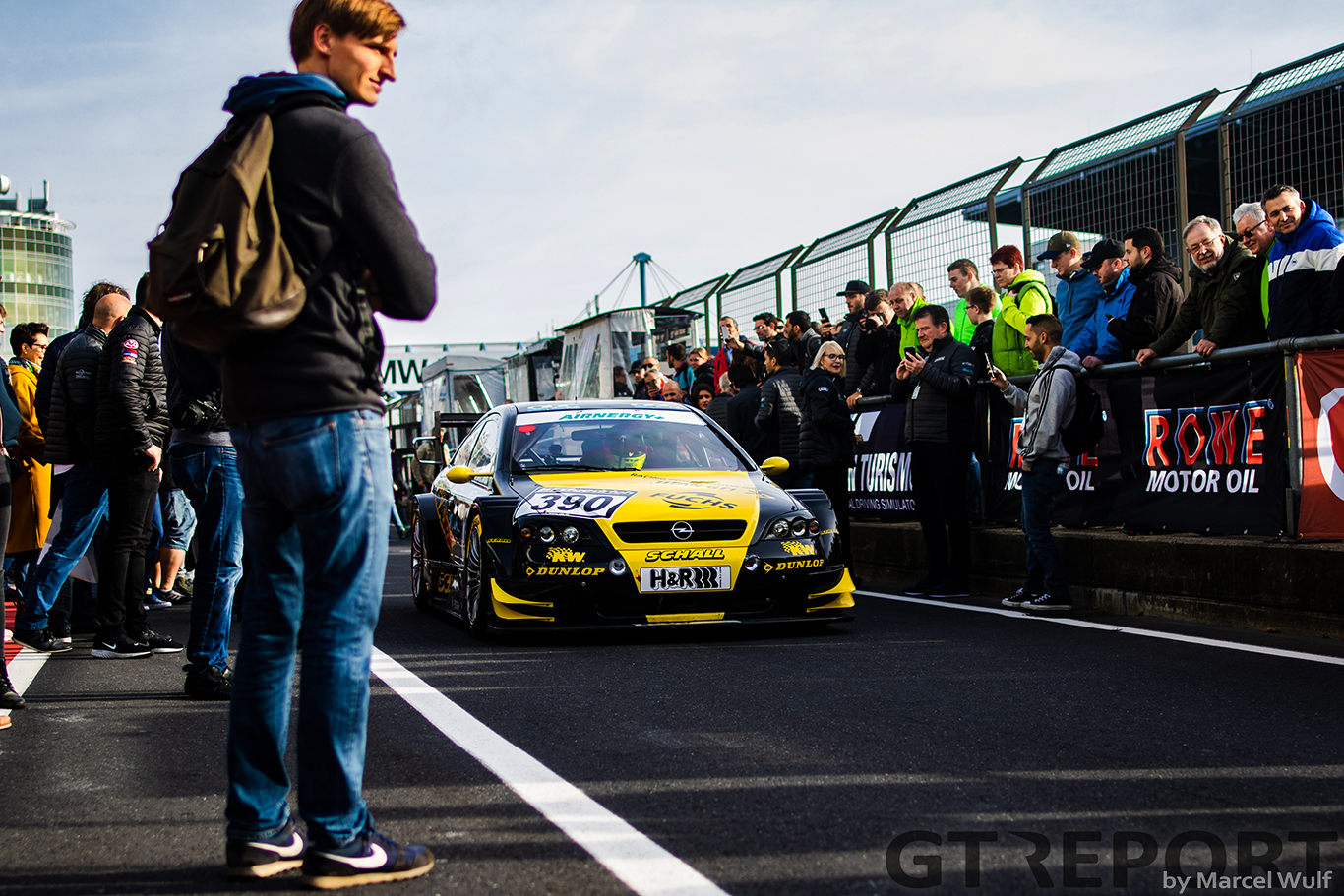 ➤  Black Falcon wrapped up the 2019 VLN season with its fourth win of the year in the 44. DMV Münsterlandpokal, again taken by the #6 Black Falcon Team AutoArena Motorsport Mercedes-AMG GT3 with Patrick Assenheimer aboard. The German driver shared his four victories with Manuel Metzger and Maro Engel, with both Mercedes-AMG works drivers taking two wins each. The last time a team won four races in one season was in 2017 when Manthey Racing brought home the gold four times, albeit with rotating driver line-ups.

➤  You can find our full gallery from VLN9 HERE.

➤  Watch the highlights of the race.

➤  Pole position was taken by Adam Christodoulou in the #16 Mercedes-AMG Team Black Falcon Mercedes-AMG GT3 with a time of 8:06.152. However, the Brit’s position in front wasn’t to last long, as autumn leaves covered the AMG’s radiator intake causing the engine to overheat and force Christodoulou into the pits at the end of the Grand Prix track. Several other AMGs, including that of later race winner Patrick Assenheimer, followed suit at the end of the first full Nürburgring lap with the same issue. The #16 Mercedes-AMG GT3 recovered to P5. 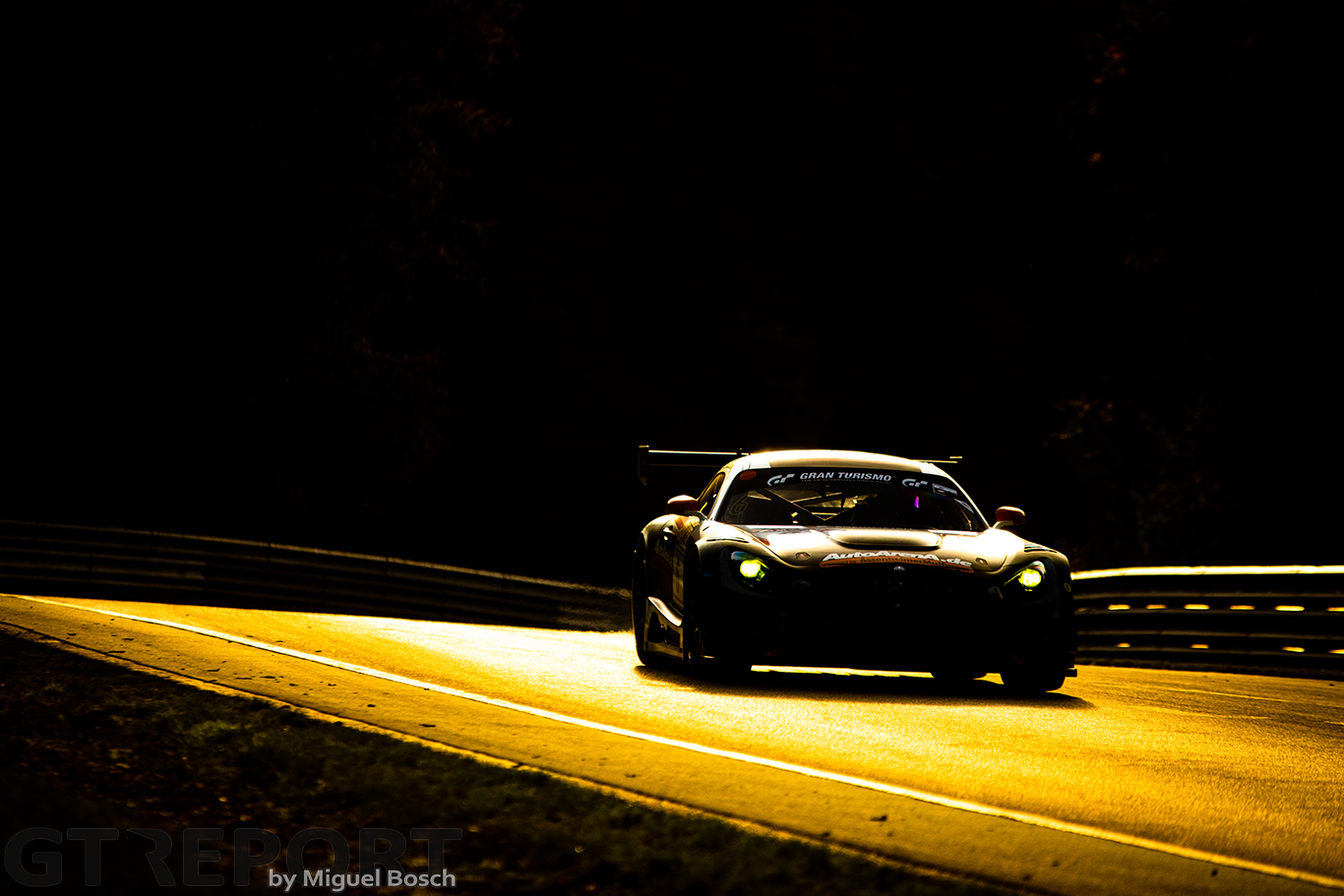 ➤  Neither David Pittard nor Maro Engel pulled any punches in their battle on the penultimate lap. The two GT3 aces clashed at Wehrseifen, with both men accusing each other of pushing the other off the track. You can read both their statements HERE.

➤  We are giving away a Yokohama cap signed by #34 Walkenhorst Motorsport BMW M6 GT3 racer David Pittard. Go HERE and find out how you can win it.

➤  Maro Engel had already accepted second place when he found the leading #911 Manthey Racing Porsche 991.2 GT3R stranded at the Karussell on the final lap. Pushing to keep Maro Engel at a 40-second distance to make up for 37-second post-race time penalty, Lars Kern made contact with a slower Audi RS3 TCR in the approach to the Karussell, pitching the Porsche into a spin and picking up a puncture. Kern made it to the finish in sixth place.

➤  The 37-second time penalty was the result of a pitstop done too fast. The #911 Manthey Racing Porsche 991.2 GT3R exited the pits before the minimum pitstop time expired. Pitstop times in the later stages of the race are reduced by every minute the end of the race approaches. This miscalculation could’ve cost Manthey Racing the win, which it indirectly did. 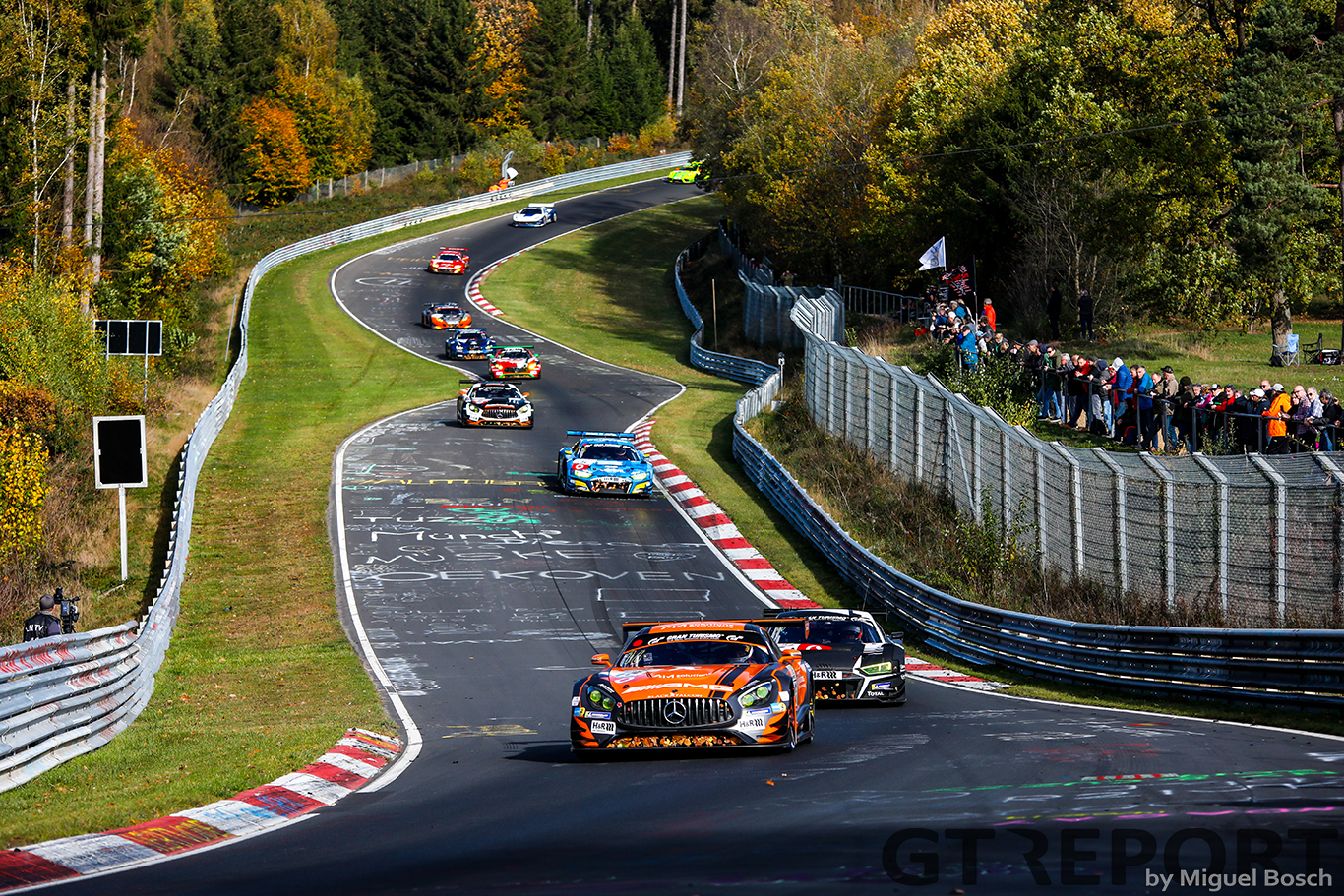 ➤  Accidents keep following ‘Grello’ around in the second half of the season, with the #911 Manthey Racing Porsche 991.2 GT3R again suffering a crash. Matt Campbell and Otto Klohs were scheduled to race VLN8 but had to forfeit on Friday afternoon as the result of a training accident, while Kévin Estre crashed the car out from the lead in VLN6.

➤  Nick Wüstenhagen ended his first season in VLN with some frightening moments when he smacked into the guardrail at Adenauer Forst. His car let go of any steering exiting Fuchsröhre as the result of a technical defect, launching his #678 FM Performance BMW M240i Racing Cup into a violent somersault. Although the BMW landed upside down with no body panel left undamaged, the young German exited the car on his own power and – except for some minor bruising – remained unscathed.

➤  Another scary accident was suffered by Michael Schrey in the #193 Hofor Racing by Bonk Motorsport BMW M4 GT4. The two-time VLN champion cleared the fence at the Hohenrain-Schikane, landing upside down outside the track. Schrey, too, escaped the frightening accident without serious injury. He was fighting for the SP10/GT4 class win at the time. 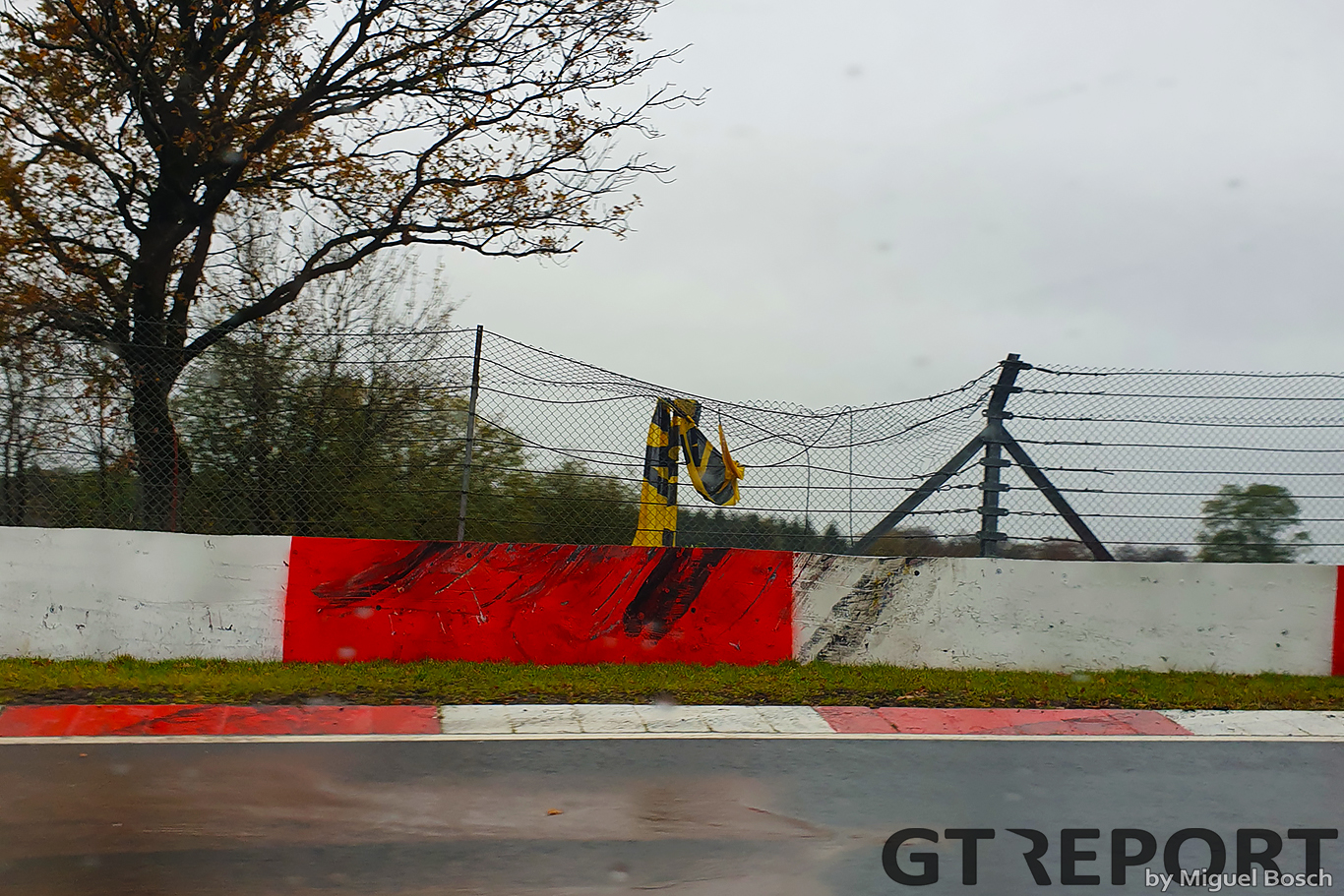 ➤  Moritz Kranz and Nico Menzel ended their season with the #979 Mühlner Motorsport Porsche 718 Cayman GT4 CS with victory in Cayman GT4 Trophy by Manthey-Racing class. The waiting is now on a decision by the DMSB regarding “illegal” brakes in VLN8 which resulted in disqualification of the #979 Cayman after a protest from Mathol Racing. Until then, the #966 Mathol Racing Cayman is provisional champion.

➤  The opening hour of the season finale saw Nürburgring aces Moritz Kranz and Gabriele Piana duke it out at the front of the Cayman cup class. Nothing could squeeze in between Kranz in the #979 and Piana in the #969 Cayman as they ran nose to tail. Piana and co-driver Thorsten Jung finished third in class, while Moritz won his class with 15th place outright. 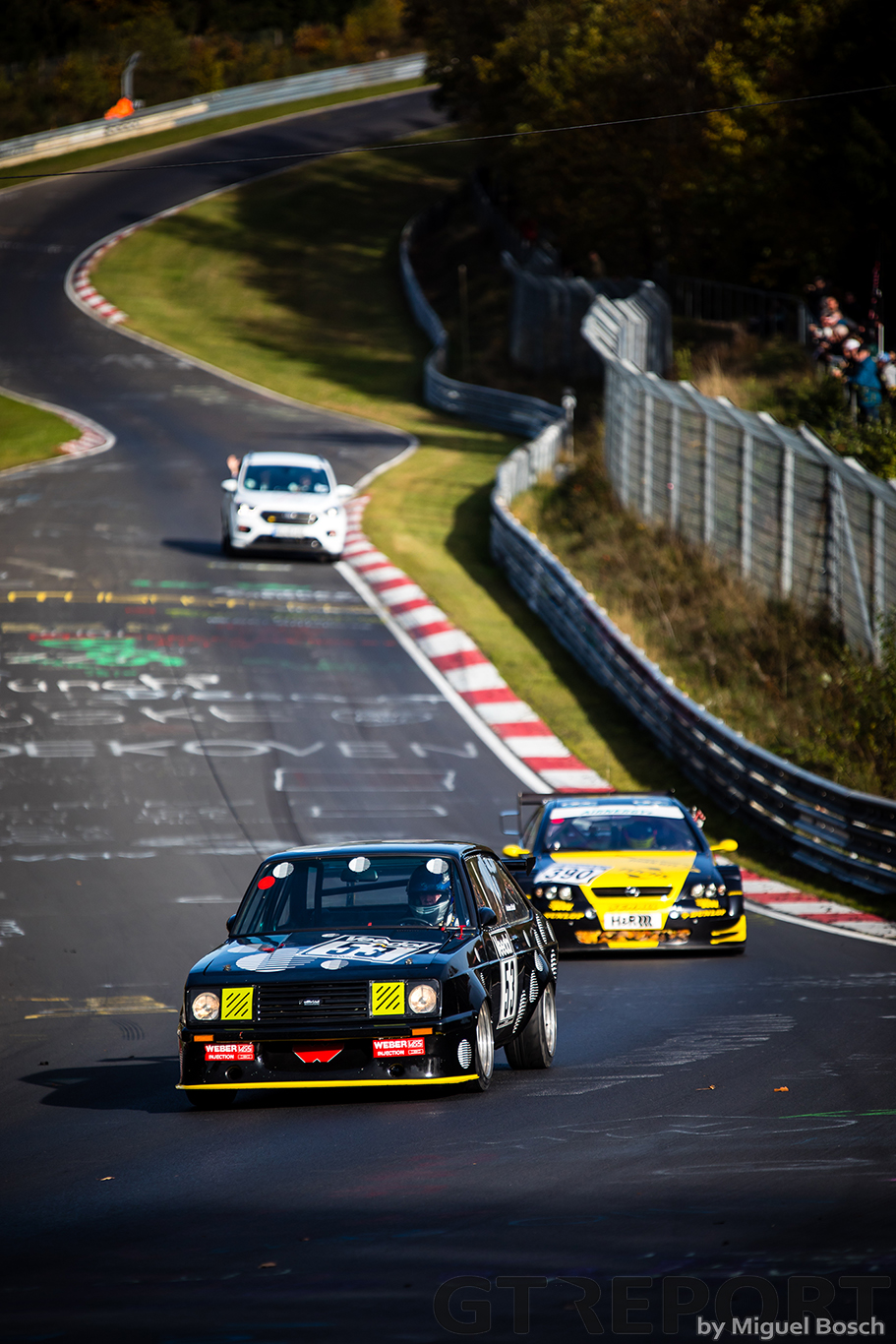 ➤  Five-time VLN race winner Andreas Schall made one last return to the championship with a lap of honour before the start of the race. The 80-year-old veteran drove his Ford Escort RS2000 for a lap around the track before the race, closely followed by his son Ralf Schall in the Opel Astra V8 Coupé the father-and-son duo raced together in the mid-2000s. Although Andreas Schall hasn’t raced for several years, he still holds a valid racing licence.

➤  Due to Ralf Schall’s lap of honour with his father it was up to Christopher Gerhard to race the #588 TAM Racing Porsche 911 GT3 Cup to the green. Schall and Gerhard won their two-car H4 class.

➤  Walkenhorst Motorsport’s GT3 line-up for VLN9 was reduced to just a single car after Friday practice. Coming up to Kesselchen, Ben Tuck lost control of the #35 BMW M6 GT3 and crashed, ending the car’s weekend then and there. The BMW was supposed to be raced by Rudi Adams, Jörn Schmidt-Staade and Jordan Tresson. 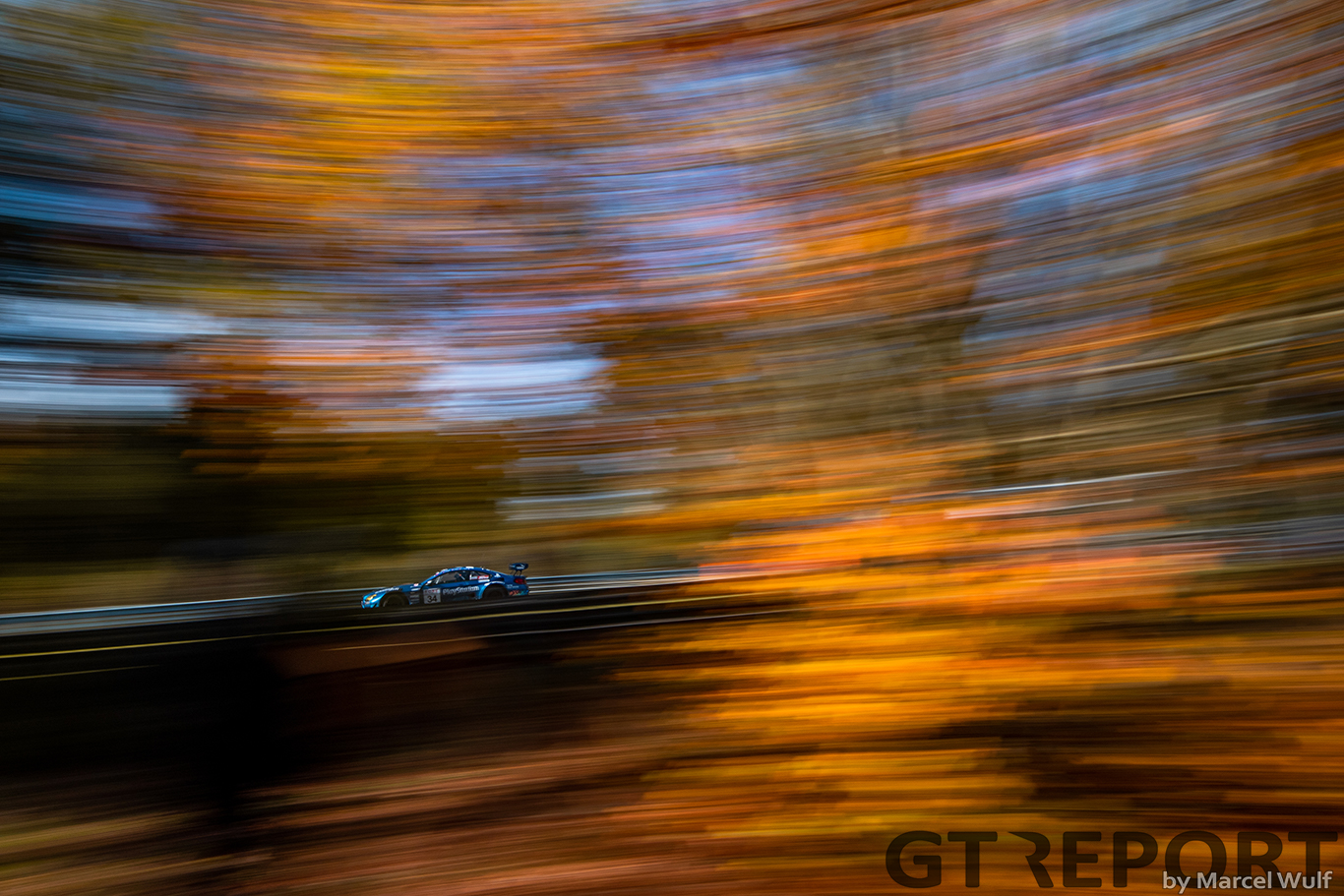 ➤  There was still something to celebrate for Walkenhorst, though: a post-race time penalty for the #4 Falken Motorsports Porsche 991.2 GT3R promoted the PlayStation-sponsored #34 BMW M6 GT3 onto the podium – but not until after the podium ceremony had already taken place.

➤  Mcchip-dkr recently received two old-spec Lamborghini Huracán GT3s previously owned by Attempto Racing. The Danny Kubasik-led team is currently converting them into Evo spec with plans to race them in the GT Winter Series held on the Iberian Peninsula.

➤  In less good mcchip-dkr news, the tuner from Mechernich lost Kondo Racing as its customer for 2020, despite having only just completed its first year of a three-year contract. The Japanese Nissan GT-R Nismo GT3 outfit contested this year’s Nürburgring 24 Hours with technical support from mcchip-dkr. Kondo Racing reportedly already found a new partner for next year’s ‘N24’. 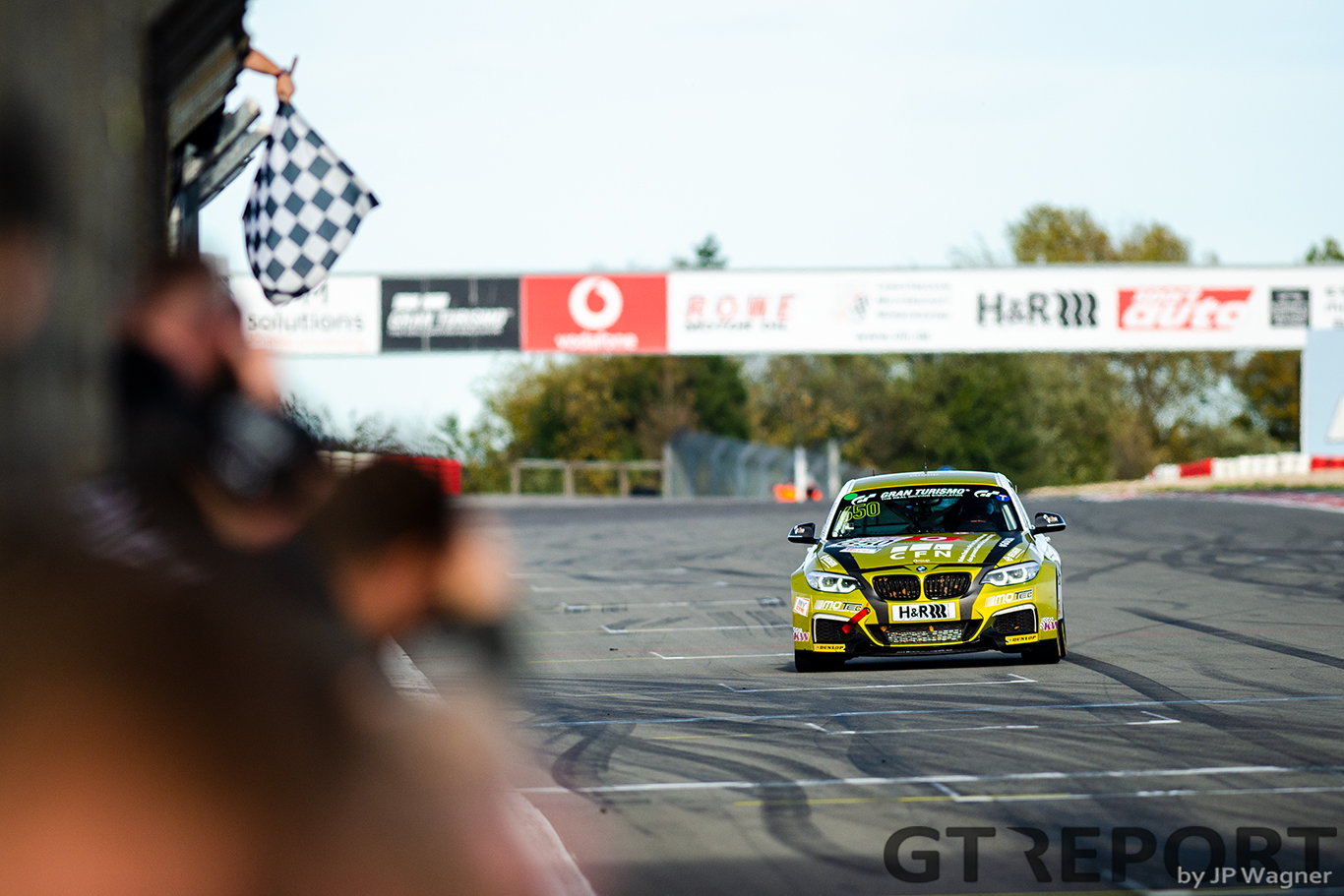 ➤  A look at some of the VLN champions crowned.

➤  The Rowe Speed-Trophäe was won by the #6 Black Falcon Team AutoArena Motorsport Mercedes-AMG GT3. The Assenheimer car had all but secured the title going into the race and doubled down on it with victory in the 44. DMV Münsterlandpokal. 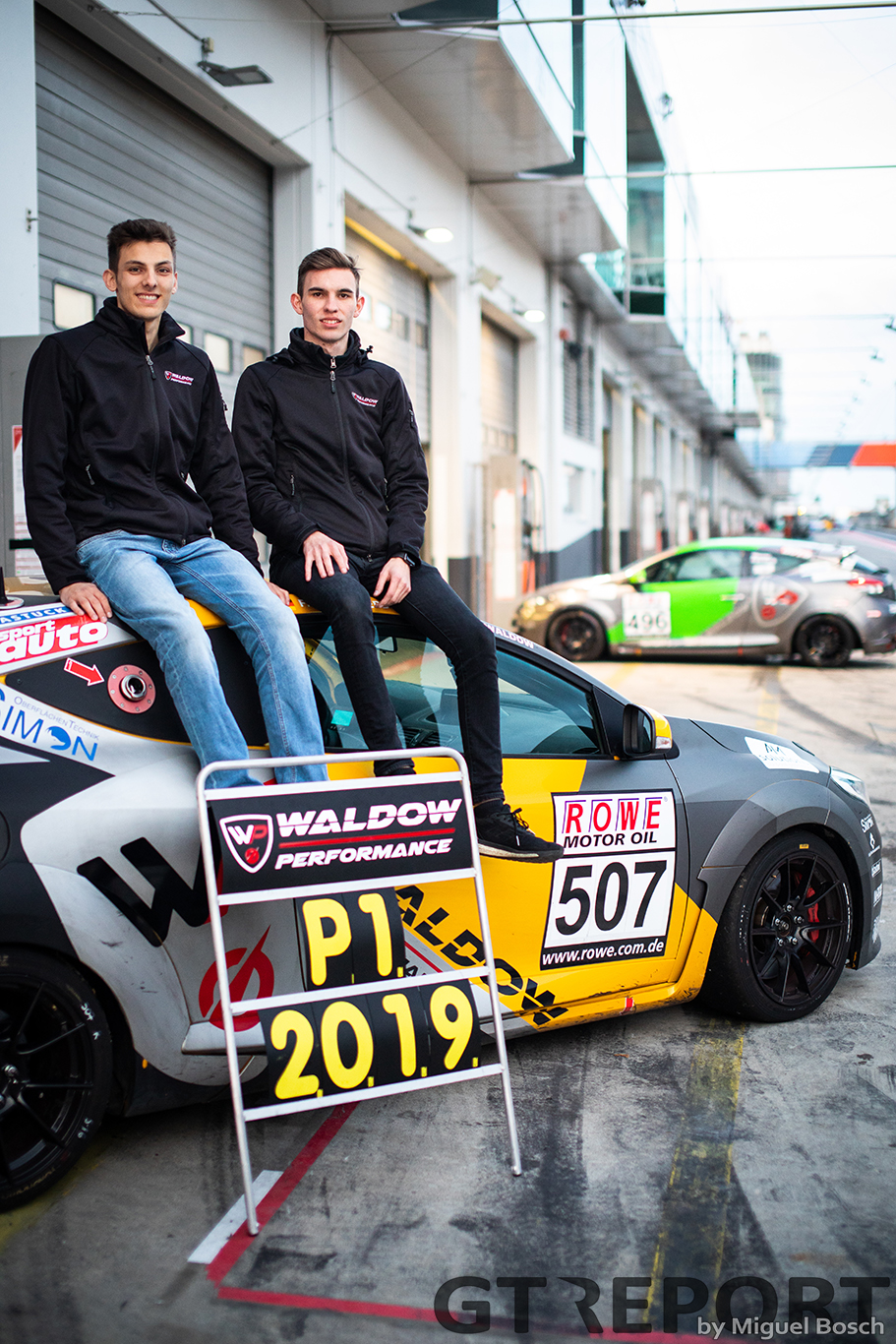 ➤  VT2 class racers Finn Unteroberdörster and Janis Waldow won their class for the second year in a row aboard the #507 Waldow Performance Renault Megane RS.

“The start of the year was very difficult because the Mannheller BMW was faster than expected, but our car is a very good endurance car that suffered no failures with the gearbox, engine or anything,” Finn Unteroberdörster said. “We won three races and scored second the rest of the time. The plan for every race was to race as fast as we could and make no mistakes. I don’t know what next year will bring because the ADAC sponsorship is over after this year, so I will have to go out and get the budget. In the next two months I will know what I will drive next year. Staying in VT2 is also a possibility. The class is growing and although our car is fast, we can improve it still a little bit for next year.”

➤  VLN vice champions – missing out on the title by just 0.12 points – Danny Brink, Philipp Leisen and Christopher Rink did win the championship in the V4. The drivers of the #1 Pixum Team Adrenalin Motorsport BMW 325i went through a rough start of the year but bounced back with five race wins from July onwards which also gave them the title in the Produktionswagen-Trophäe. 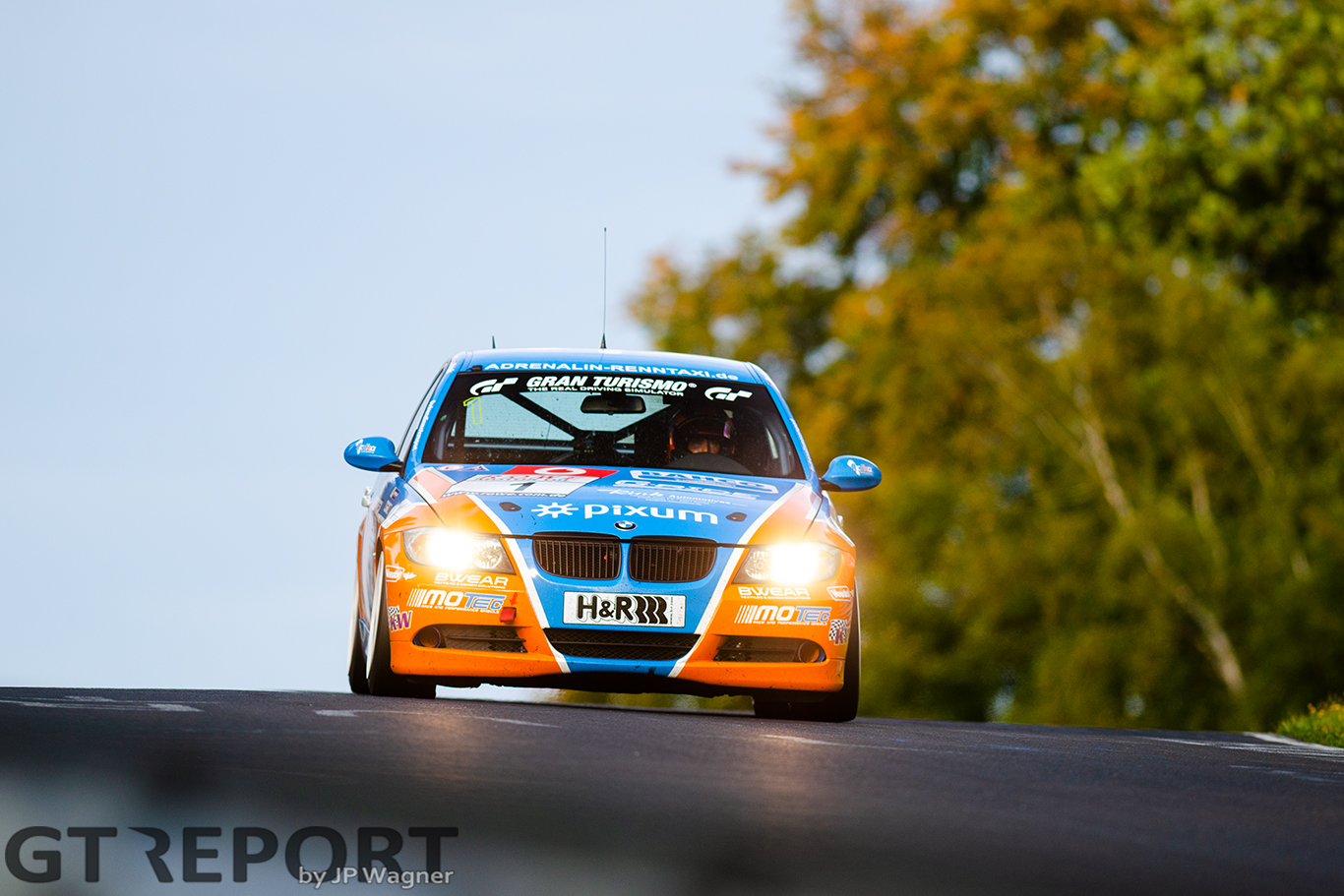 ➤  After a one-year break the VLN-Fanpage Kart Event is back for its 11th edition. On Saturday 2 November Karting Eupen hosts the popular post-season event dubbed as ‘VLN10’. Professional race car drivers from VLN, ADAC GT and Blancpain GT team up with fans for a day of karting with two two-hour points races in both directions deciding the winning team of the event. The first race starts at 12:00 CET. Entrance for spectators is free. You can find more information HERE. 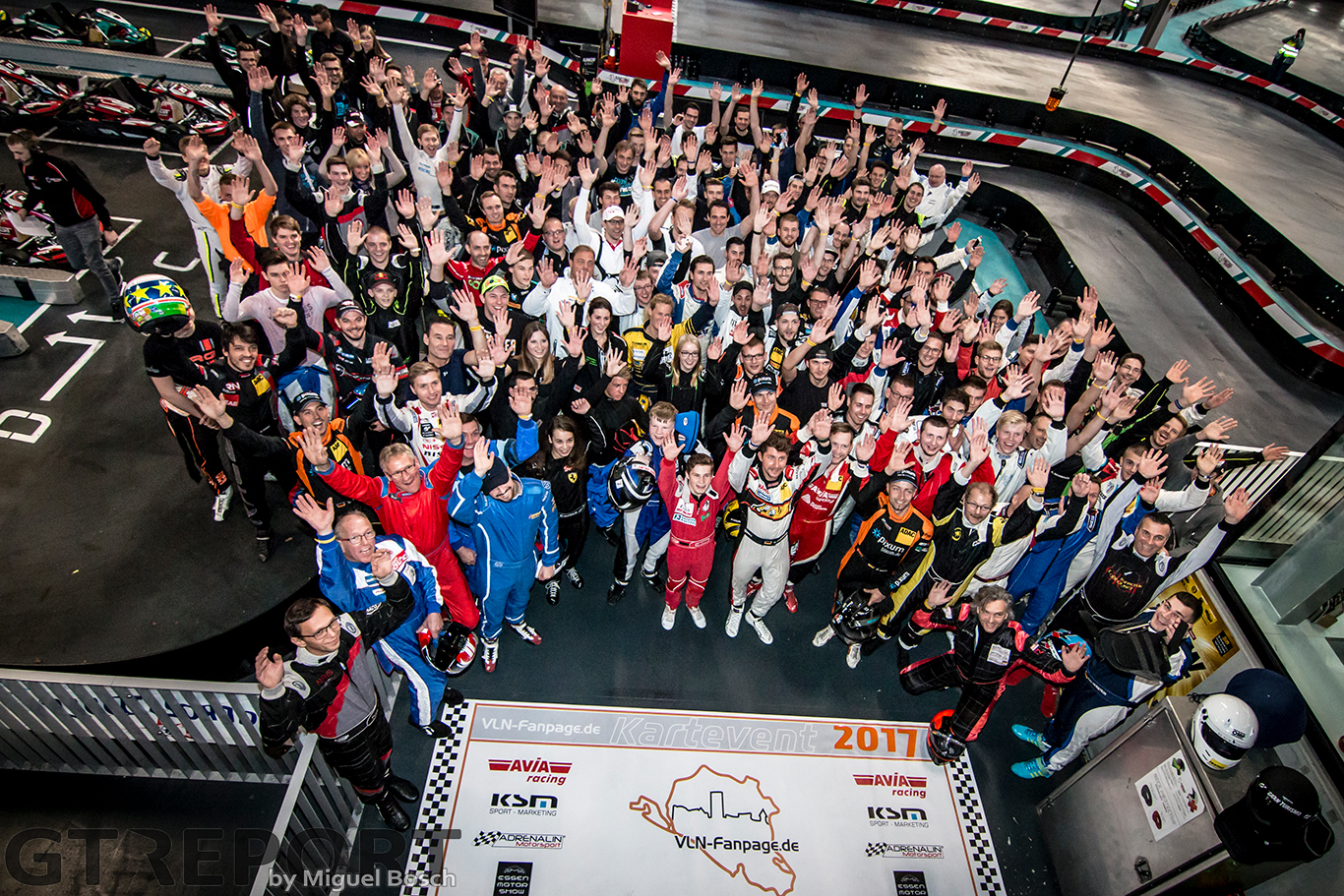 ➤  “I don’t have much karting experience but I think it’s gonna be a fun event with the guys,” said Philip Ellis about the VLN-Fanpage Kart Event. “I don’t know much about the event, I know it’s going to be mixed with drivers and fans. I’ve just heard recommendations from drivers to go there so I basically said yes. It’s gonna be a big surprise for me! Maybe I’ll get some tips from the other drivers that have been doing it or have been there for the last few years! I’ll just hang in there and we’ll see, it’ll be spontaneous. I’m looking forward to the event. I don’t know who is all going to be there but I expect to see some familiar faces and hopefully whoop some ass!”

➤  David Griessner will make his second appearance at the VLN-Fanpage Kart Event, having been there in 2017 for the first time: “Now I can really enjoy it because I took the VLN championship and accomplished my big goal, my dream, and now I will just enjoy the kart race. But I also want to be fast there, so I think I’ll have to practice a little bit because I haven’t been in a kart for a long time. Two years ago the event was very good, very well organized and had very good drivers as well. It was a lot of fun and I’m looking forward to that again.” 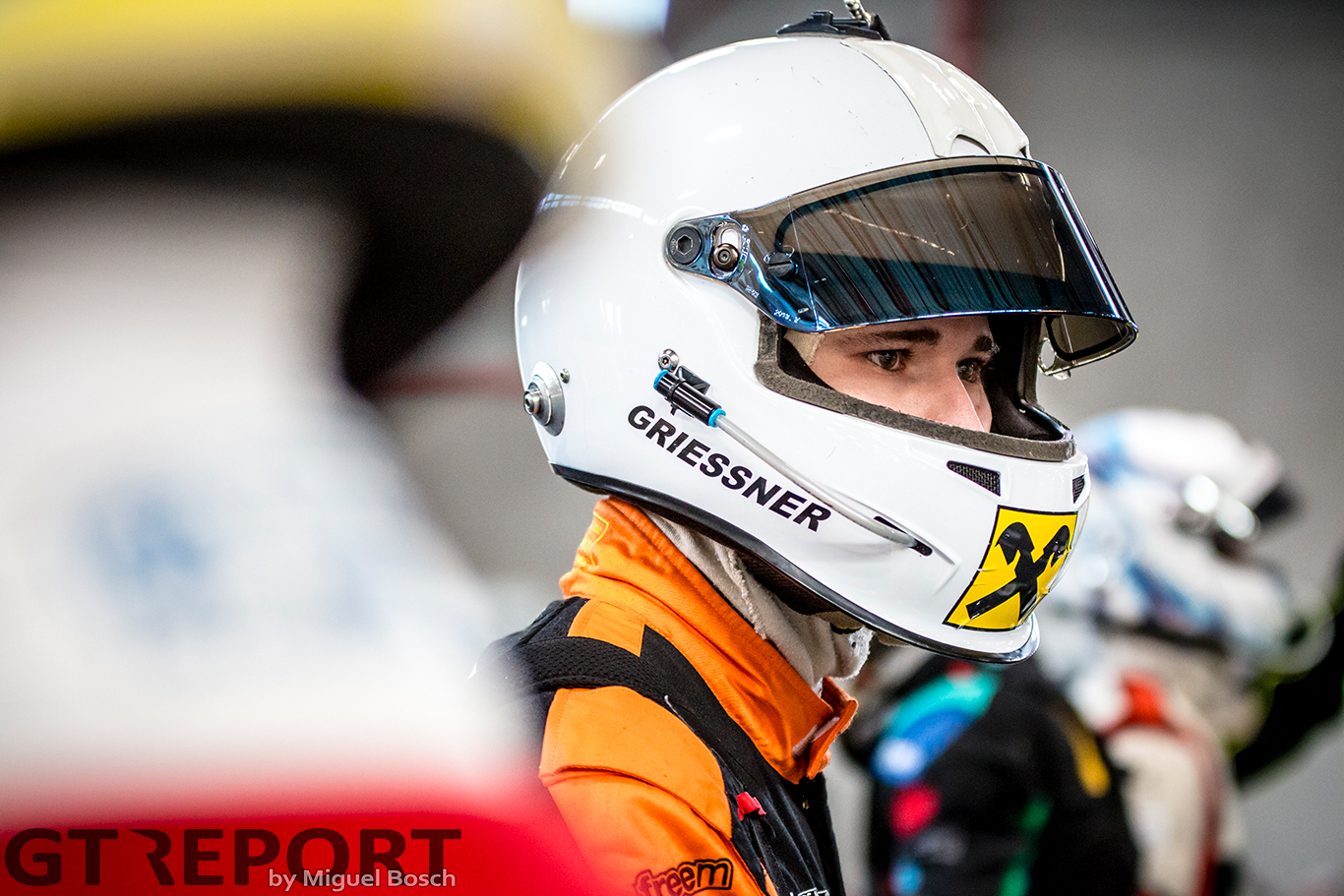 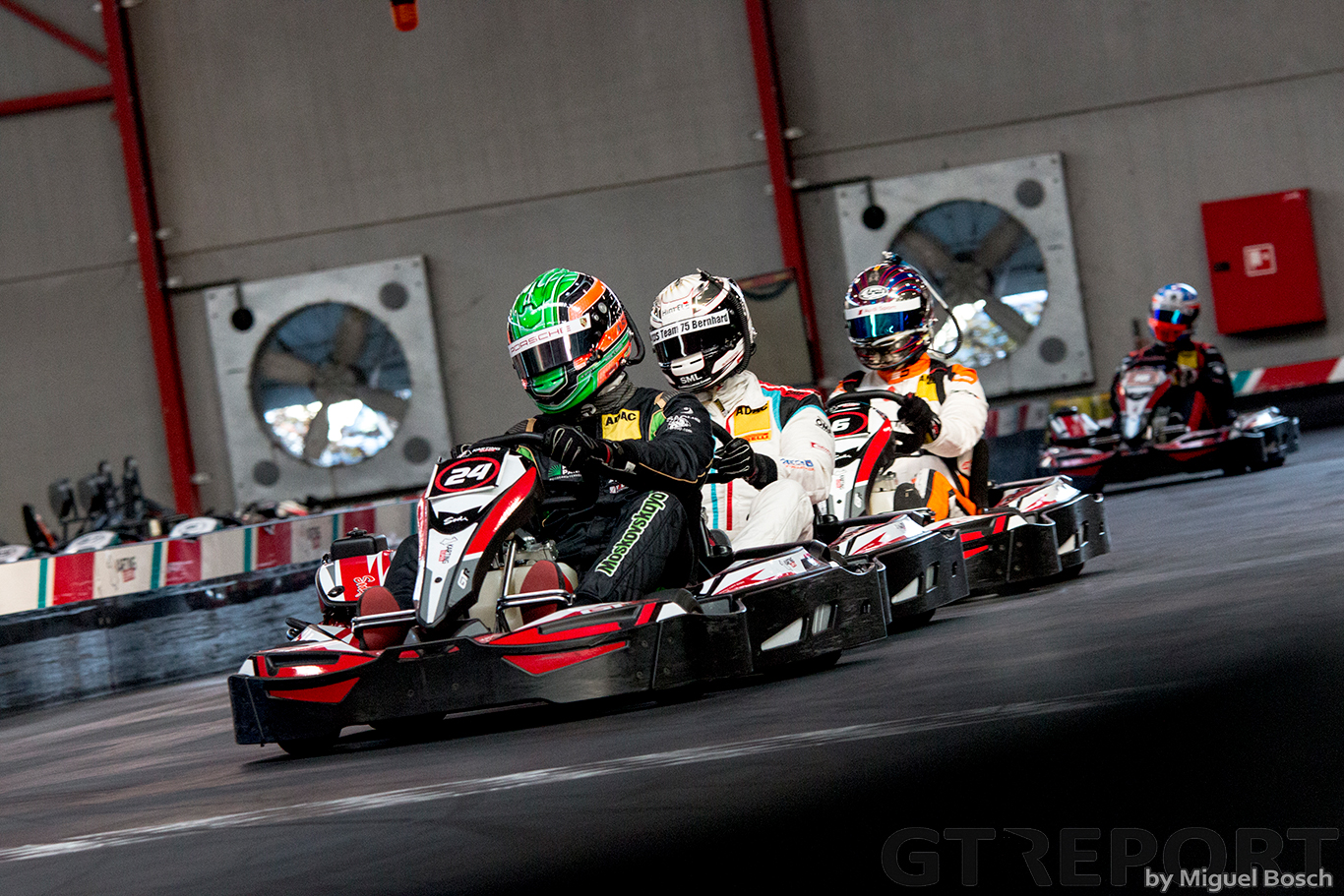 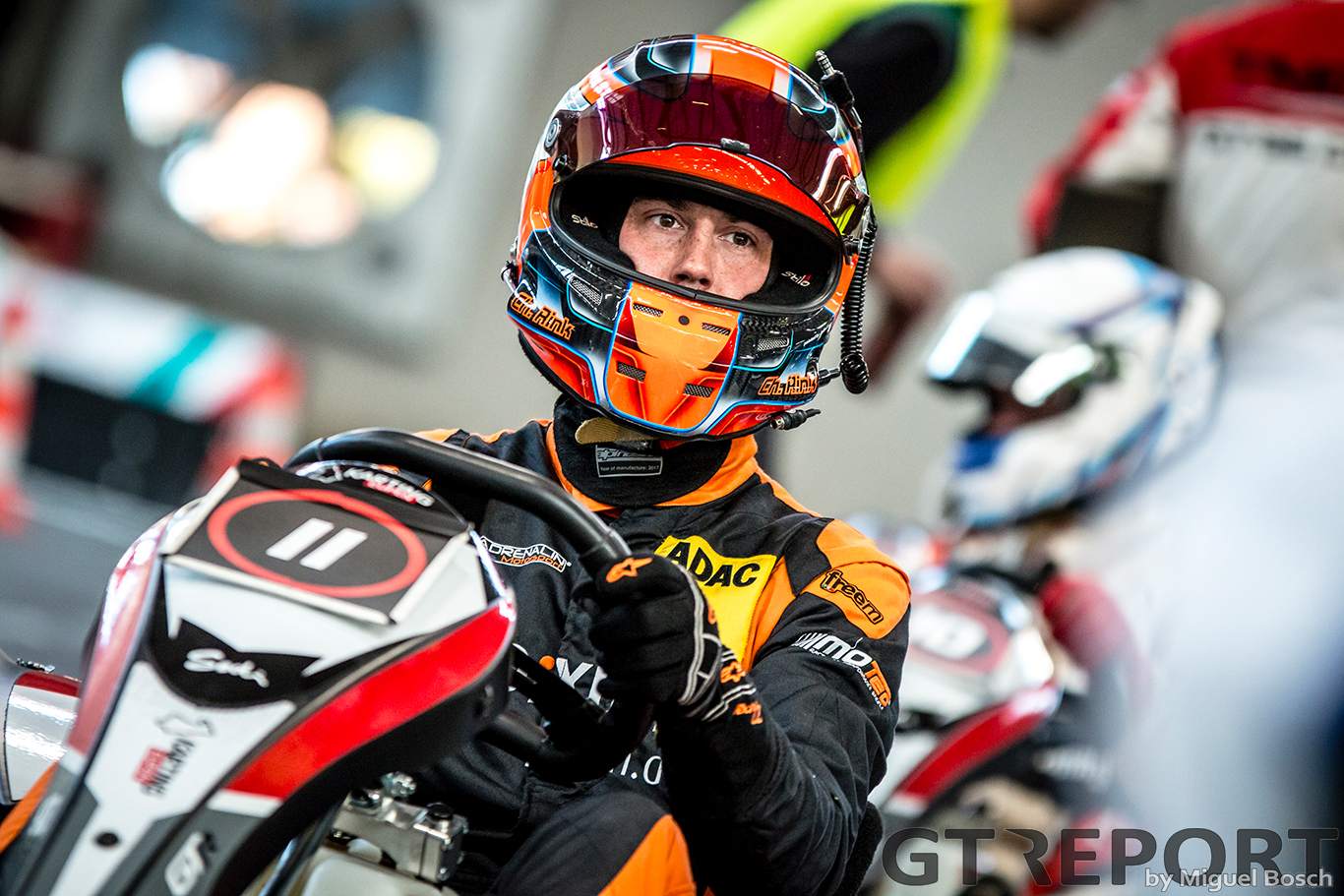 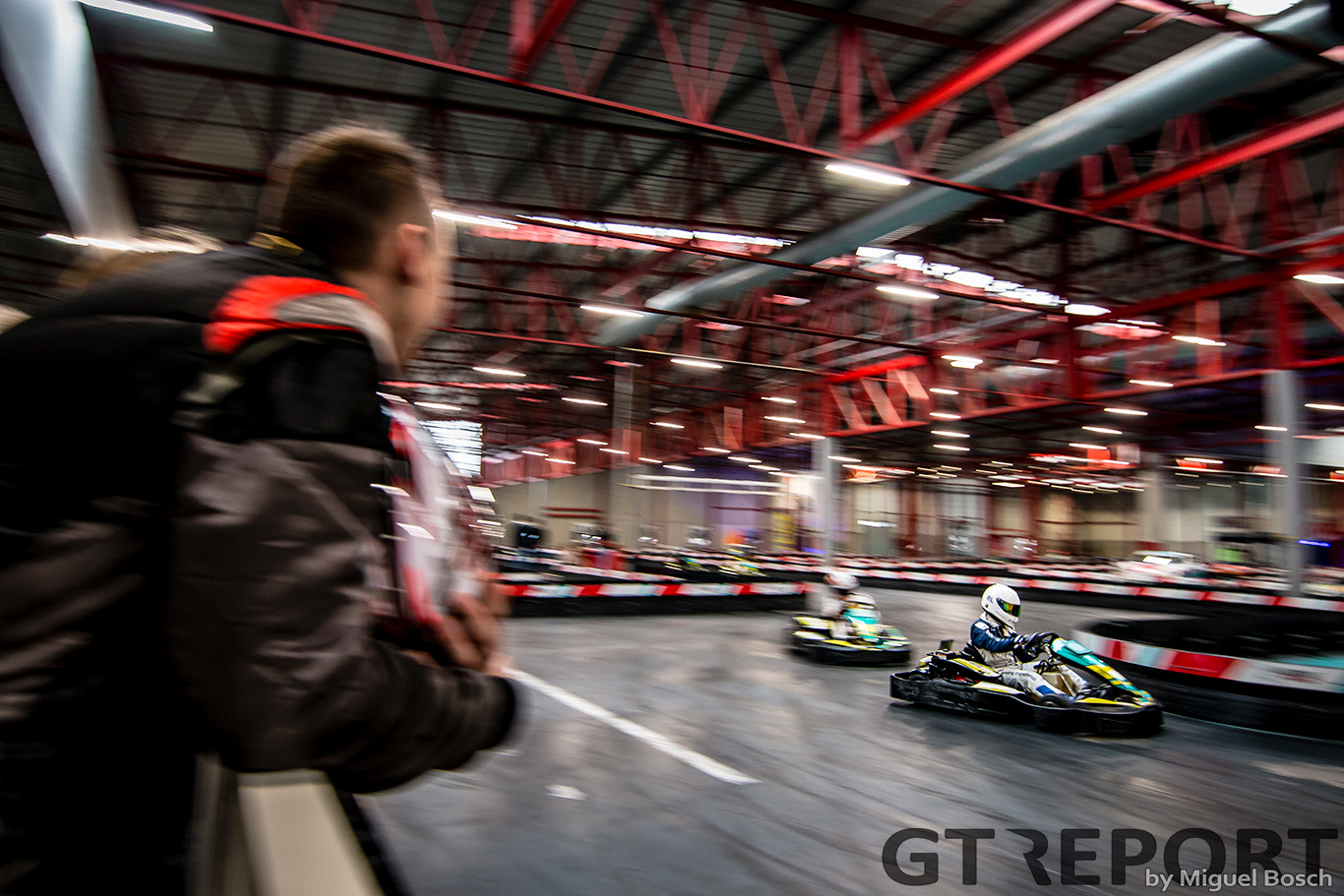 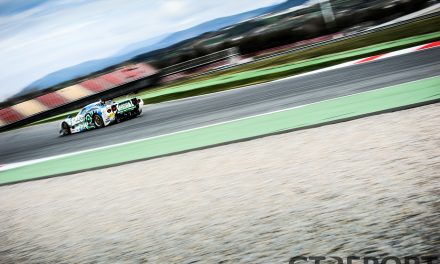 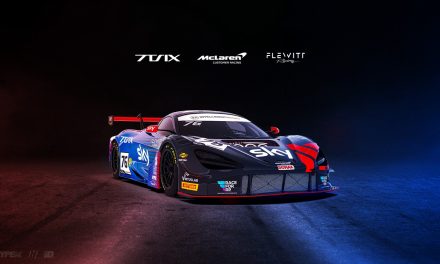 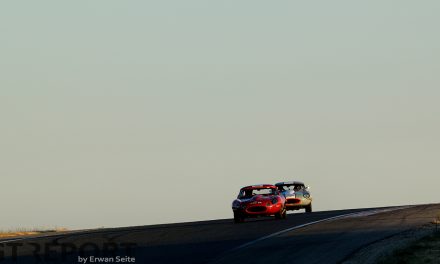