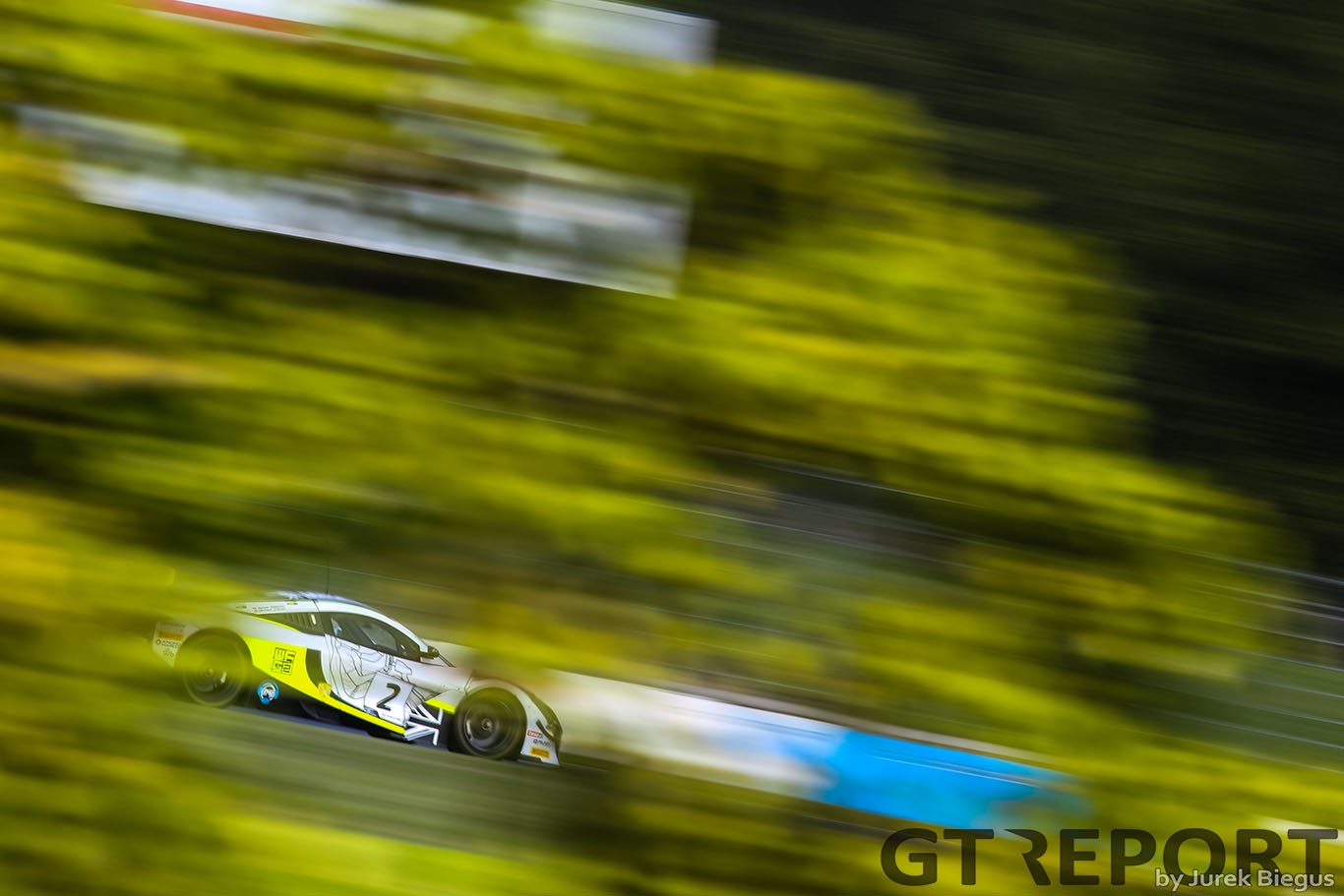 James Baldwin and Michael O’Brien proved they’re still the fastest over one lap as they took their third Intelligent Money British GT Championship pole in four races as they blitzed the field in their Jenson Team Rocket RJN McLaren 720S GT3 at Donington Park.

GT4 pole was secured by Academy Motorsport after an absolute scorching lap by Jordan Albert in the team’s Ford Mustang propelled him and Matt Cowley above HHC Motorsport’s Jordan Collard and Patrik Matthiesen in a hard-fought session.

Baldwin’s early lap in the Am portion of qualifying proved to be the key for the McLaren squad claiming its second pole at Donington this year.

His 1m27.511s was almost two-tenths clear of his competition, headed by RAM Racing’s Sam De Haan, and more importantly it put him well ahead of his Pro-Am competition and gave his Silver-rated team-mate O’Brien the best platform to capitalise on.

Capitalise he did. Whilst his own lap wasn’t the quickest in qualifying, he did go under Baldwin’s time by a few tenths and on the averages that proved to be too much for the competition.

That wasn’t through lack of trying though, as De Haan’s co-driver Patrick Kujala went faster than O’Brien in the Pro portion of qualifying but couldn’t dig any deeper to try and find the fraction of extra time he needed to move from the outside to the inside of the front-row. The Mercedes-AMG GT3 pair will start second by just 0.065s. 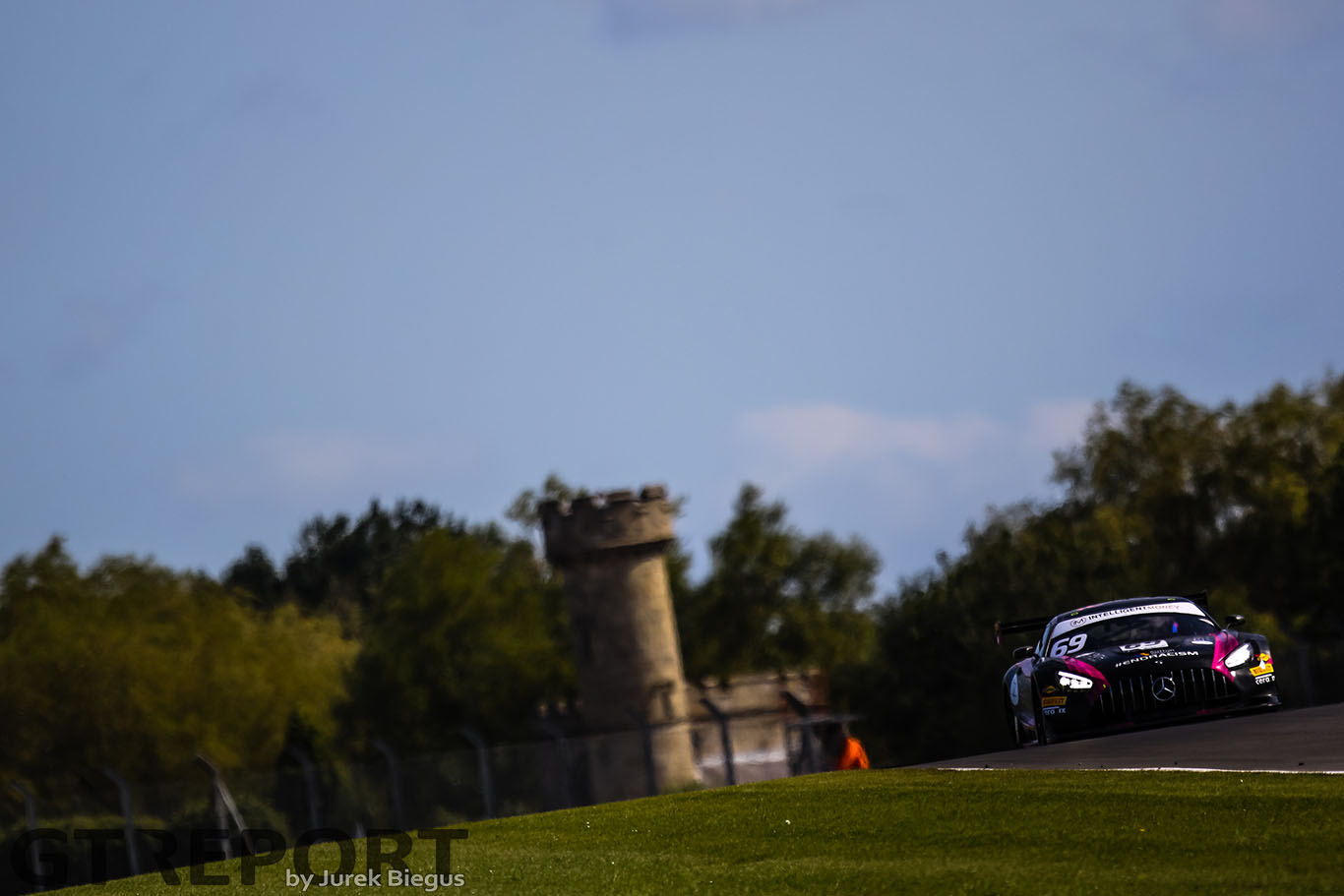 The advantage the Silver Cup crews on the first row had was evident when it came to who will be lining up third. Despite an absolutely scorching lap, Phil Keen and Adam Balon can only line up in third after Balon’s still respectable time of 1m28.232s was too much for Keen to counteract even after clocking a 1m26.715s.

Lining up alongside the Barwell Motorsport Lamborghini Huracán GT3 Evo is the second RAM Mercedes of Ian Loggie and Yelmer Buurman. After Loggie finished fourth in the first part of qualifying, Buurman appeared set to jump up into the top three as he set personal best sectors on his final lap. However, despite setting the third-best time the pair remained glued into their fourth-place, just 0.052s from leaping ahead of the Barwell entry.

On the third row is a pair of Lamborghinis with Sandy Mitchell and Rob Collard, in the second Barwell Huracán, finishing a handful of tenths clear of the WPI Motorsport entry of Michael Igoe and his new team-mate for this weekend Marco Mapelli. Mapelli was the last of the three drivers to drop into the 1m26s during his session.

Ollie Wilkinson and Lewis Proctor took seventh for Optimum Motorsport in their McLaren 720S GT3, edging out the McLaren of Dean Macdonald and Angus Fender – the former unable to match the ferocious pace in the 2 Seas Motorsport machine during Pro qualifying.

Ninth went to the Steller Motorsport Audi R8 LMS of Richard Williams and Sennan Fielding while Team ABBA Racing, which gained more valuable race mileage of Donington during last weekend’s GT Cup Championship round at the East Midlands circuit, rounded out the top ten in the hands of father and son duo Richard & Sam Neary. 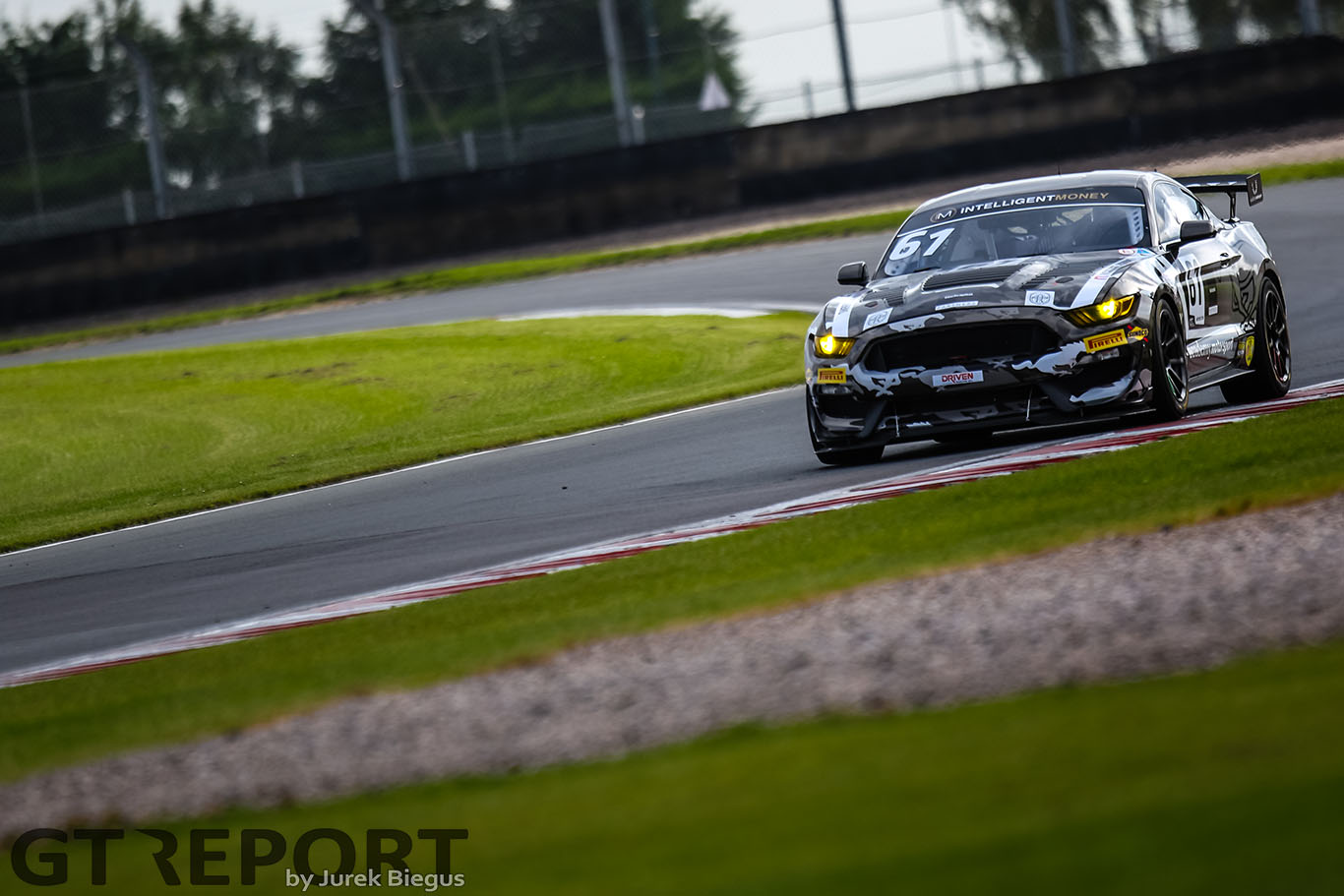 In the second class, pole position proved to be a shoot-out between two very different cars as the HHC Motorsport McLaren 570S of Collard and Matthiesen battled it out with the V8 power of Cowley and Albert’s Ford Mustang.

After finishing second and third respectively with Matthiesen and Cowley in the Am section of qualifying, two of the fastest laps in class of the weekend was what determined who claimed pole.

Collard’s early 1m34.801s put HHC on the front-foot and with the real potential of adding to the pole position it earned at Donington last month.

Albert, though, was having absolutely none of it. Dropping into the 1m34s on his opening lap, the only other driver to do so, he did a cool-down lap and then wound it up again – immediately setting the timing screens purple. Fastest of anyone in the first two sectors, a personal best in the final sector added up to a 1m34.697s which pushed the Academy car onto pole by just 0.071s on the averages.

Despite Patrick Kibble setting the fastest time in the first portion of qualifying, his team-mate Connor O’Brien in the #95 TF Sport Aston Martin Vantage couldn’t match the pace of the crews ahead but still qualified a solid third and will be optimistic of adding to their August win at Donington in tomorrow’s three-hour encounter.

Fourth went to the second of the HHC McLarens with Gus Bowers and Chris Wesemael half-a-second off the TF Aston but almost the same amount ahead of the #97 TF entry of Jamie Caroline and Dan Vaughan – the latter causing the only red flag of the session as he went off into the gravel at the Melbourne Hairpin.

Balfe Motorsport took sixth and seventh – as well as being the first two Pro-Am entries on the grid – as Euan Hankey and Mia Flewitt took the spoils ahead of the identical McLaren of 2012 British GT4 champion Warren Hughes and Jan Klingelnberg.

Century Motorsport’s BMWs finished in eighth and ninth with the Toyota Supra GT4 rounding out the top ten. It’s not the position the Speedworks team would have expected though after James Kell’s fifth-fastest time in Am qualifying, the car had a suspected technical issue which meant Sam Smelt couldn’t take over the car for the second portion of the session.

Sunday’s three-hour race gets going at 12.45pm for three hours around the undulating Donington Park circuit. GT REPORT will be live-streaming all the action, so you don’t have to miss a thing! 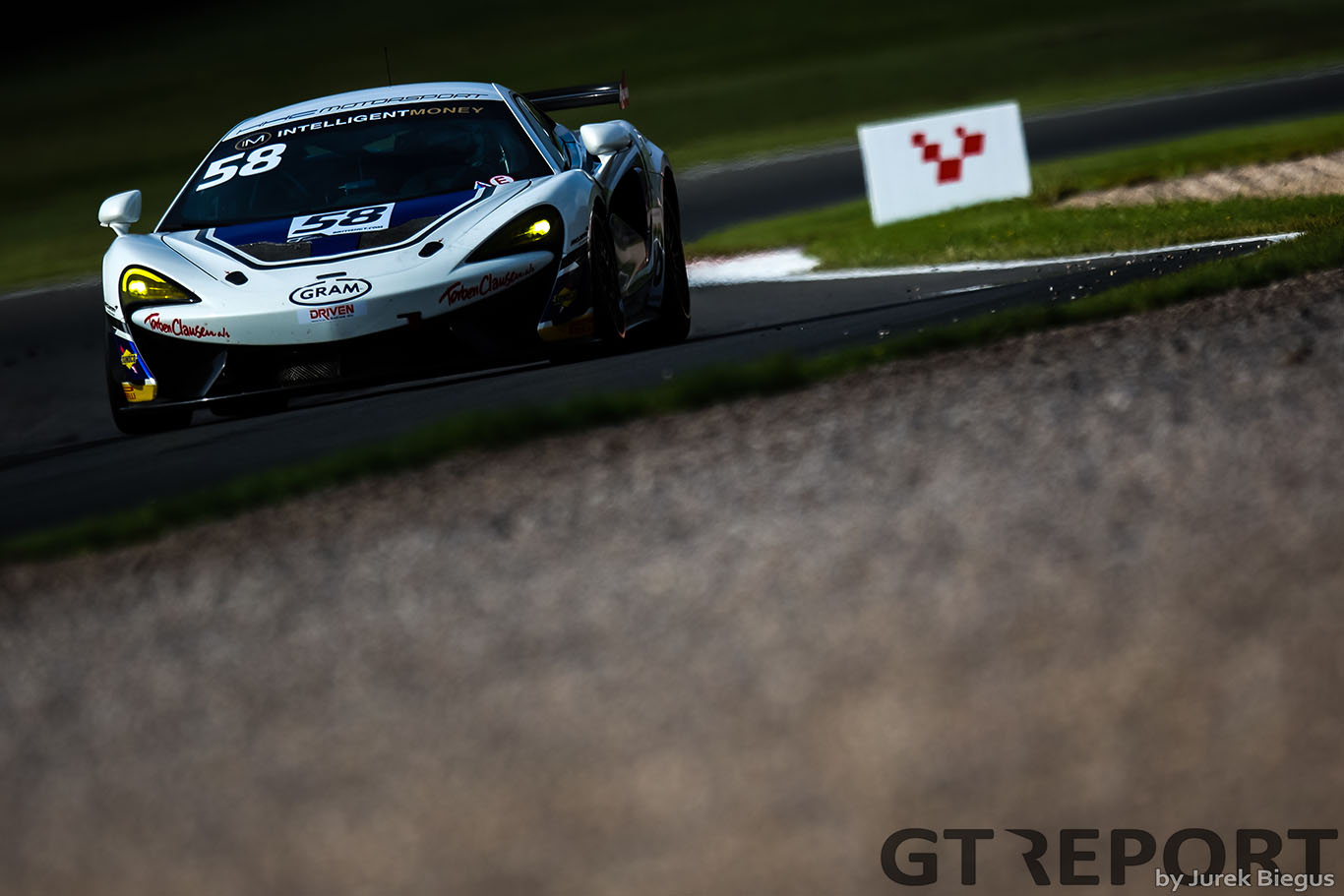 NOW AVAILABLE IN OUR SHOP: 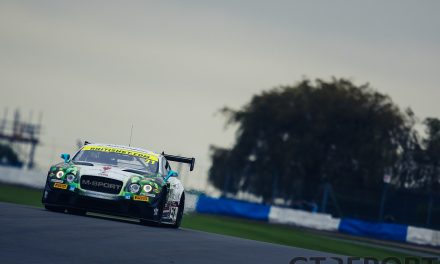 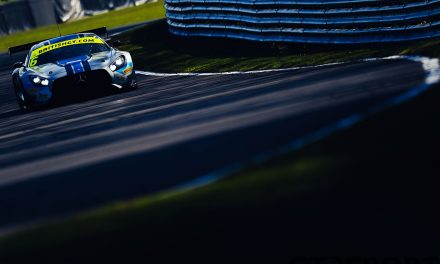