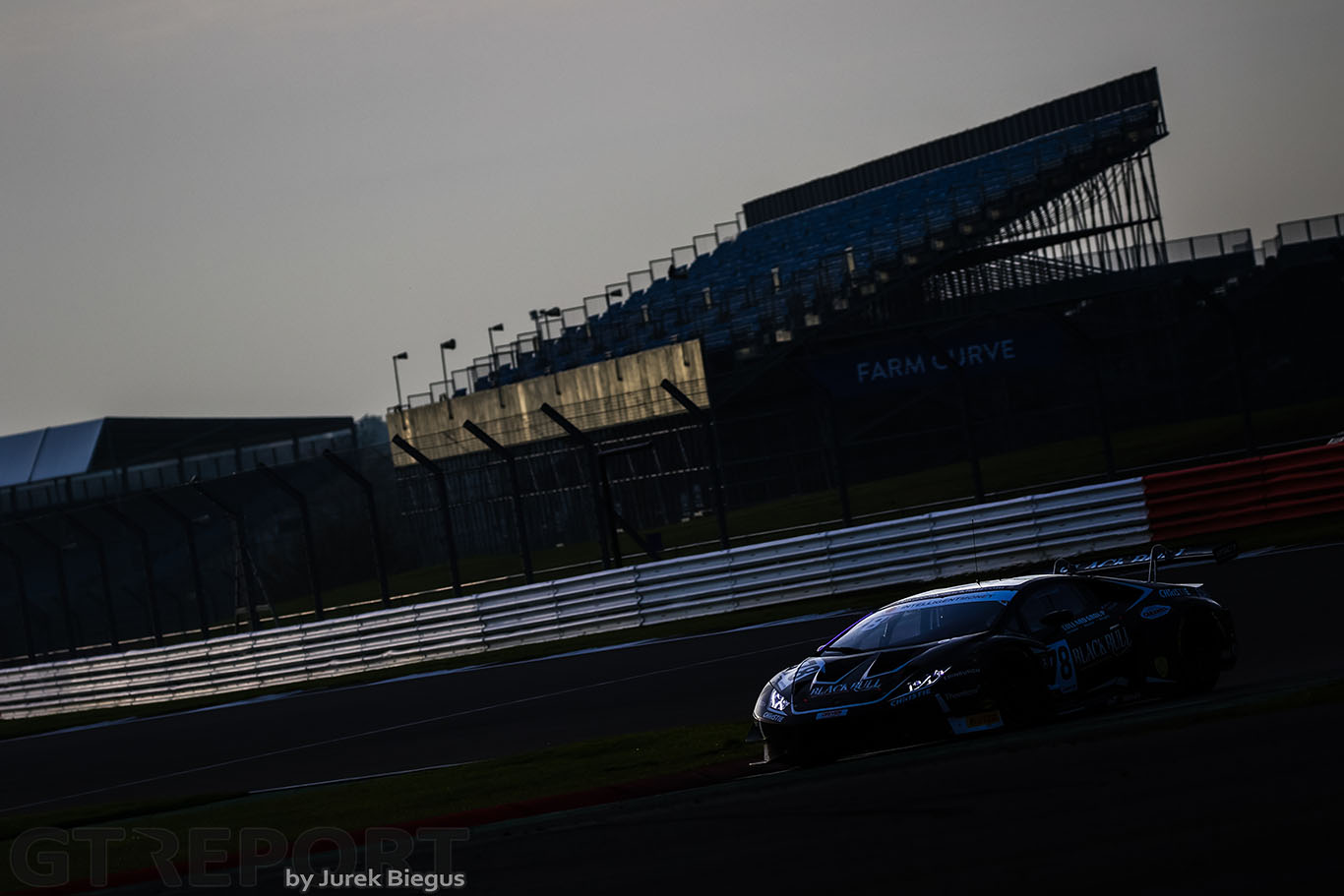 Sandy Mitchell and Rob Collard have given their championship chances a huge boost as they secured pole position for the Intelligent Money British GT Championship’s blue-riband Silverstone 500.

The GT4 pole was decided on the last lap of the last session as Sam Smelt pulled a remarkable time out of the bag to give Speedworks Motorsport the top spot in its Toyota Supra.

The Barwell Motorsport’s pair took pole position after dominant laps by both Collard and Mitchell in both elements of their qualifying.

Getting his tyres quickly up to temperature – no mean feat considering how cold the Silverstone circuit has been all day – Collard was an immediate pacesetter. His initial effort was just pipped by James Baldwin – who had a good session in the Jenson Team Rocket RJN Mclaren 720S – but he kept on improving with his ultimate lap the fastest of the Am section of qualifying – a 1m58.499 – the only one, apart from Baldwin, to drop beneath the 1m59 barrier. 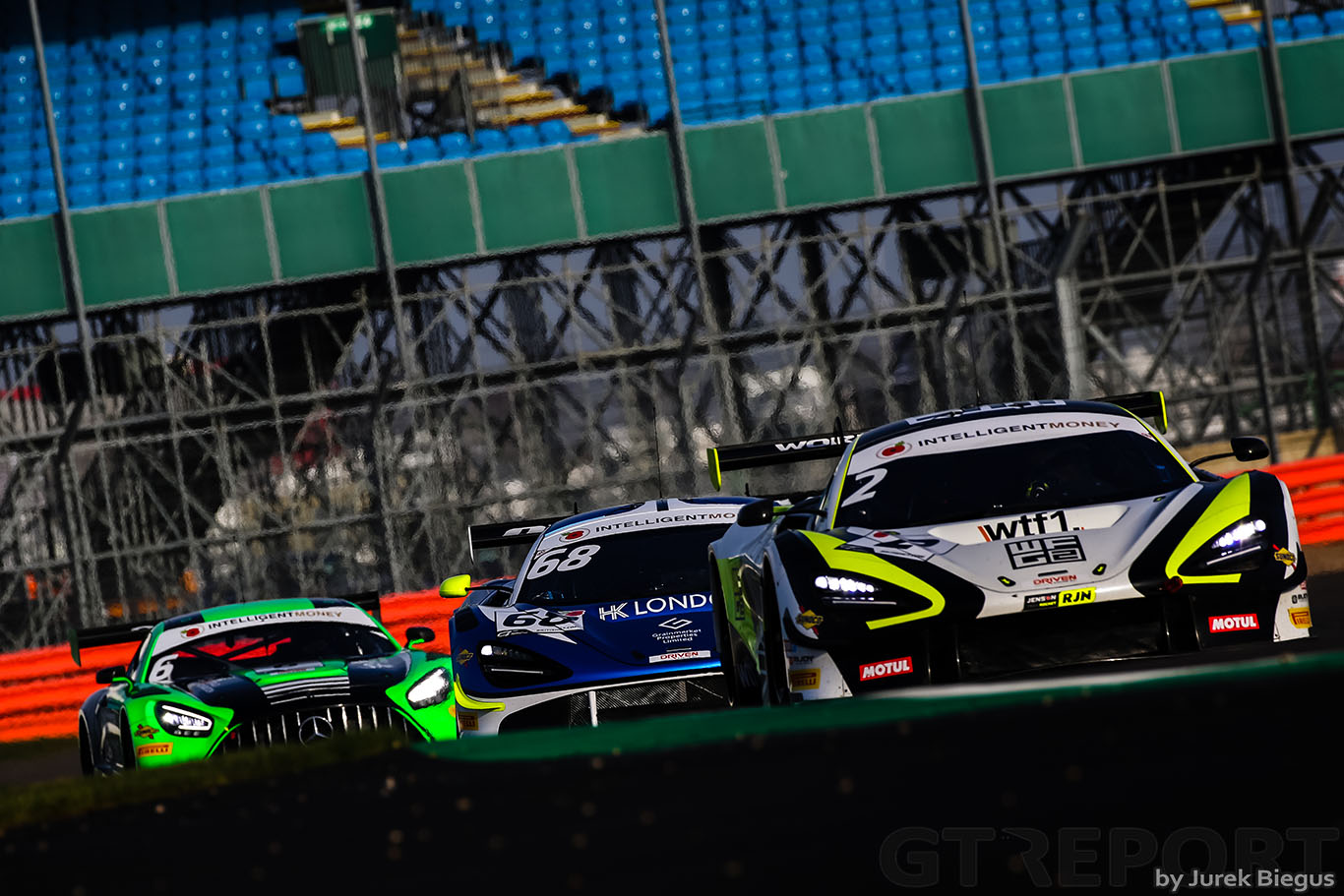 While Mitchell – who took part in the Pro session – couldn’t match Collard’s table-topping times the truth is, he didn’t need to. While his individual time put him seventh out of 20, on the combined teams they were streets ahead of all other rivals as their time of 3m56.467s was more than half-a-second better than anyone else could manage.

Indeed, the next best laps came from the Ram Racing Mercedes-AMG GT3 of Ian Loggie and Yelmer Buurman as both put in more than respectable times but couldn’t dip into the 3m56s instead settling for a 3m57.040s. What their combined time did do, though, is knock their championship leading team-mates Sam De Haan and Patrick Kujala down into third.

De Haan’s Am lap was just good enough for seventh, but Kujala’s fifth-fastest lap in the second session was enough to pull the pair up and into a great position for tomorrow’s race.

Fourth went the way of Baldwin and team-mate Michael O’Brien – the latter just unable to match the pace of the front-runners as a Silver driver.

More remarkable is who will start fifth. After ending his session in 16th, Adam Balon’s team-mate Phil Keen pulled off one of his typical qualifying masterclasses to ensure the second Barwell Motorsport Lamborghini will start the three-hour race in fifth. His 1m57.162s was far and away the fastest lap in the session and helped propel the championship contenders up onto the third row. 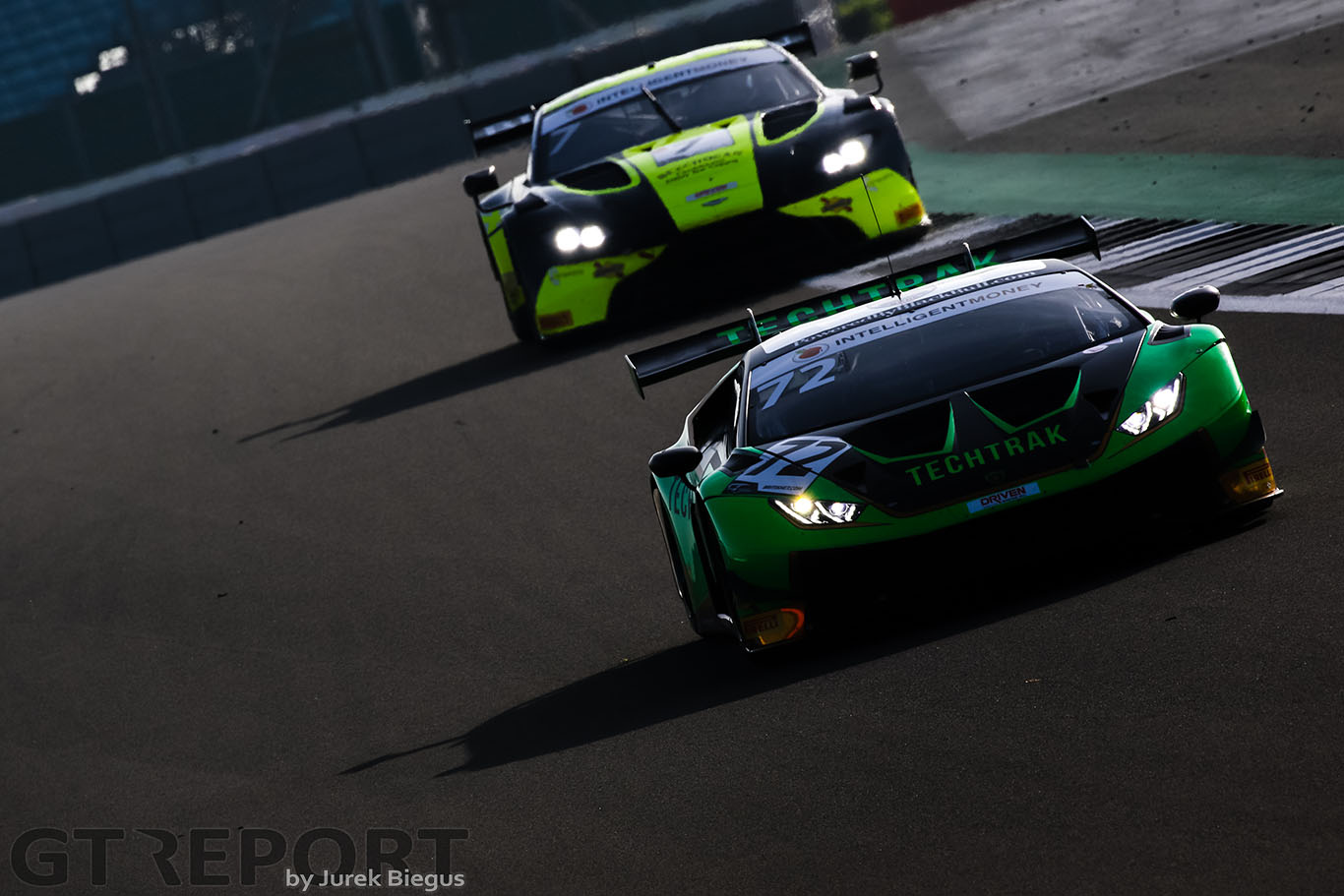 They’ll be joined on that row by Lewis Proctor and Ollie Wilkinson in the Optimum Motorsport McLaren, as the pair almost came from nowhere to give themselves a great position for the race.

Their triumph was matched by the remarkable climb pulled off by WPI Motorsport. The Huracán finished mid-pack in Am qualifying by Michael Igoe but then Andrea Caldarelli set about the task at hand and clocked the fourth-fastest lap in the entire qualifying to take seventh.

Eighth went to Beechdean AMR after Andrew Howard and Charlie Eastwood put on a great pair of laps – the latter in his first British GT qualifying session. GT3 returnees Balfe Motorsport and TF Sport rounded out the top ten with Tom Canning doing an admirable job in his first GT3 qualifying.

Down the order, the second Jenson Team Rocket entry at the hands of Chris Buncombe and Jenson Button could only finish 18th, with the pair complaining of cold tyres and brakes hampering their McLaren. It’s also the first GT3 qualifying session for Button and the first time in a GT3 car in more than a year for Buncombe. 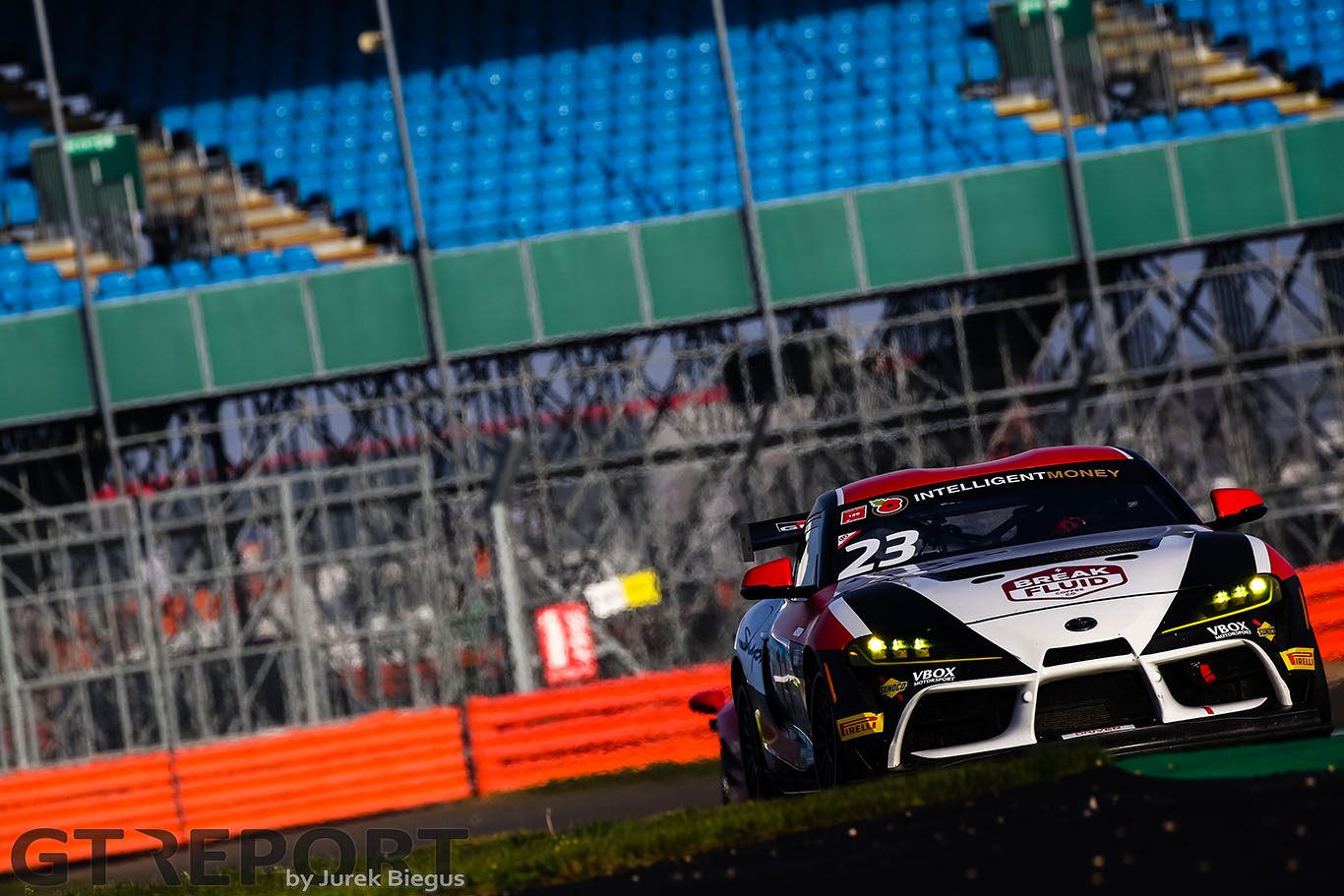 In the closing minutes of Pro qualifying, it looked as though Jamie Caroline had put on another display of rapid lapping to ensure he and team-mate Dan Vaughan would start their TF Sport Aston Martin from the very front of the GT4 field.

However, with the very last lap of the session the championship leaders were knocked off their perch by a remarkable effort from Sam Smelt in the Speedworks Motorsport Toyota GR Supra.

Trailing the bright yellow Aston by just 0.011s before his final lap, Smelt’s 2m10.003s was easily the fastest of the session and gave him and team-mate James Kell a 0.144s margin over the Vantage.

Caroline and Vaughan will also have a championship outsider breathing down their necks in third as Matt Cowley and Will Moore demonstrated just how much the big Ford Mustang loves Silverstone as the Academy Motorsport pair hustled their way onto the second-row – pushing down the Newbridge Motorsport Aston Martin of James Dorlin and Alex Toth-Jones which had topped Am qualifying.

Fifth went to another of the GT4 title contenders as Chris Wesemael and Gus Bowers, in the #57 HHC Motorsport McLaren 570S, prevailed over rivals Connor O’Brien and Patrick Kibble by 0.060s. Indeed, the second of the TF Sport entries is the meat in a HHC sandwich as Patrik Matthiesen and Jordan Collard finished in seventh but just 0.018s behind in what is shaping up to be a spectacular fight for the title. 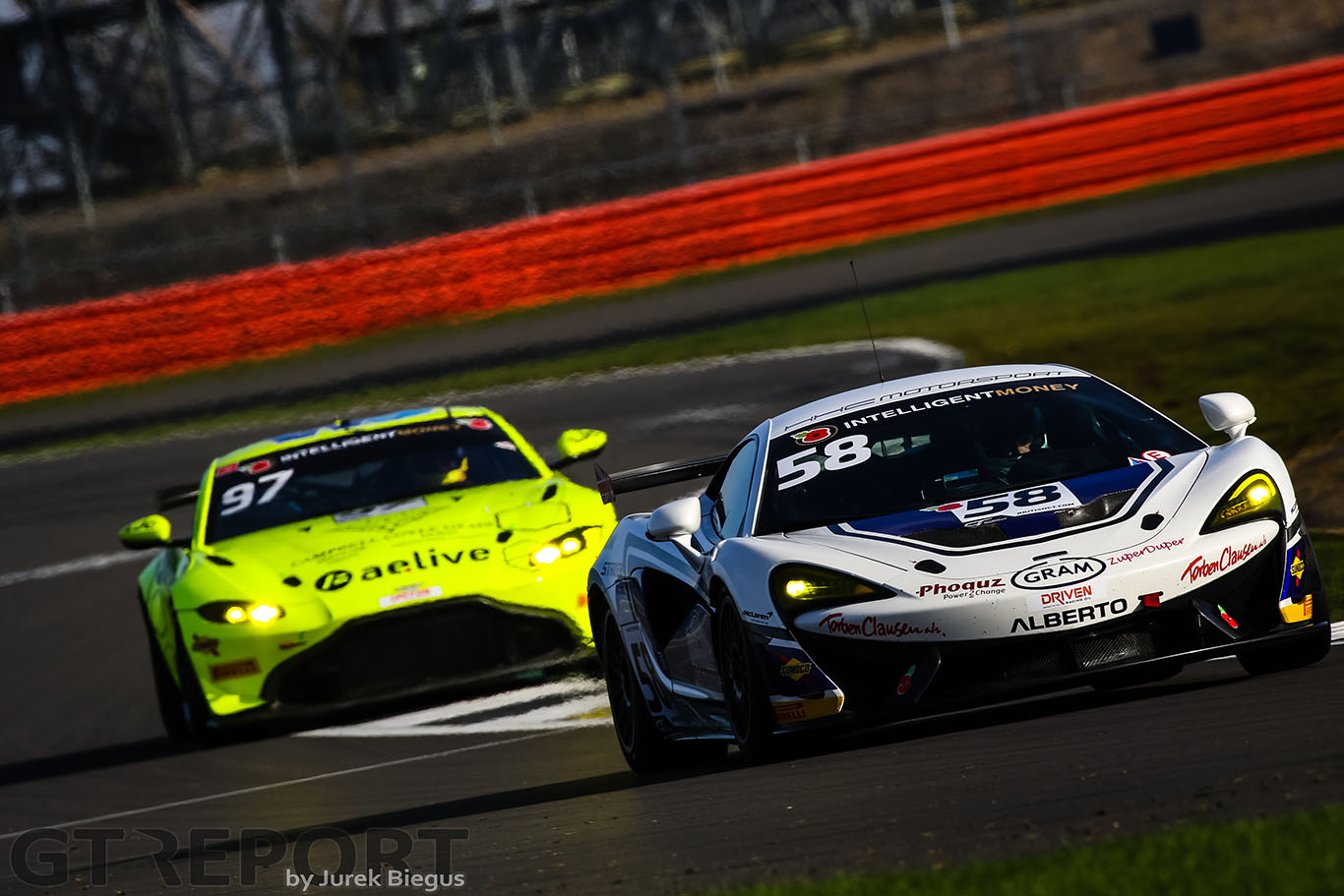 Scott Malvern set the fastest lap of the session as he proved quality doesn’t fade as he took eighth, and Pro-Am pole, in the Team Parker Racing Mercedes-AMG GT3 he is sharing with Nick Jones.

Andrew Gordon-Colebrooke and Rob Wheldon took ninth for Century Motorsport, while Euan Hankey and Mia Flewitt rounded out the top ten in the first of two Balfe Motorsport McLarens. It should have been three, but England’s lockdown rules meant Jan Klingelnberg couldn’t travel to Silverstone to race alongside Warren Hughes.

It was a Ferrari fest at the front of the five-car GTC field but not competition for who would get pole as Ross Wylie and Lucky Khera blew away the competition in their Simon Green Motorsport Ferrari 488 Challenge.

In the car they are racing as a trio – Lee Frost electing to skip qualifying as it only needed two drivers – first Khera and then Wylie put in laps that were unbeatable in both sessions.

That added up to a combined time of 4m06.619s – 1.6seconds faster than their nearest rivals John Dhillon and Phil Quaife in the Ferrari run by former works driver Aaron Scott in his Scott Sport team.

Third went to Laurent De Meeus and Jamie Stanley as the Ferrari Challenge Europe runners paired up once again to just edge out the first of the Team Parker Porsche 911 Carrera Cup cars by 0.011s. Rounding out the grid were Porsche Carrera Cup GB regulars Justin Armstrong and Ryan Ratcliffe.

The race gets underway at 12.50pm UK time (13.50 CET), with live coverage on GT REPORT and live Tweeting at @GTxREPORT 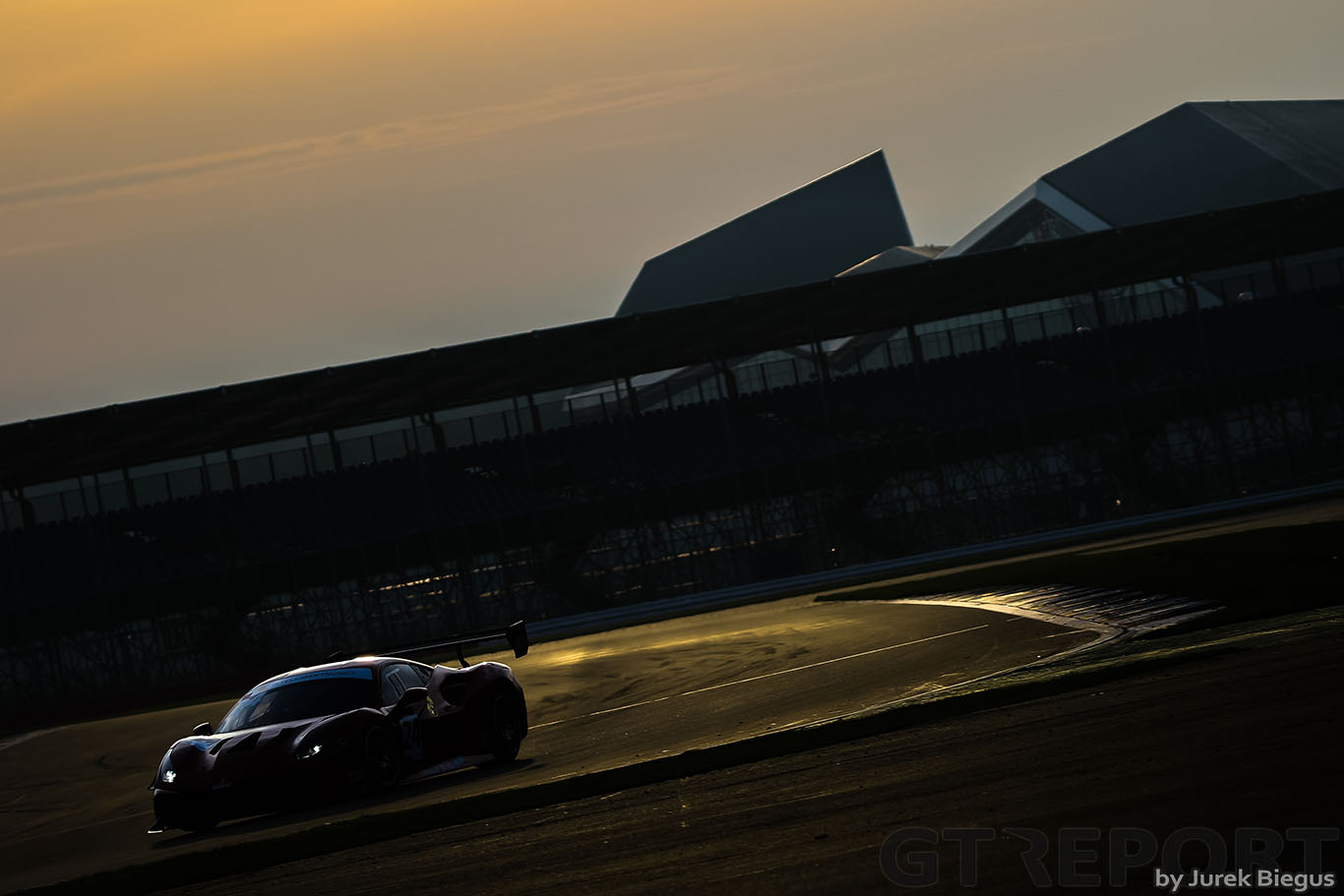 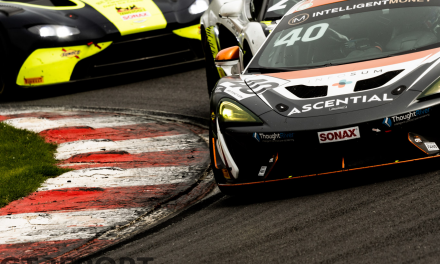 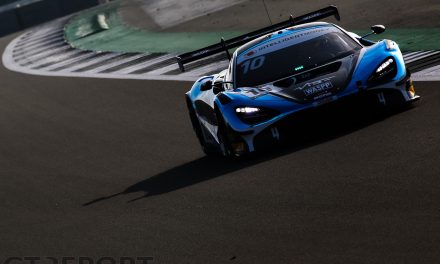 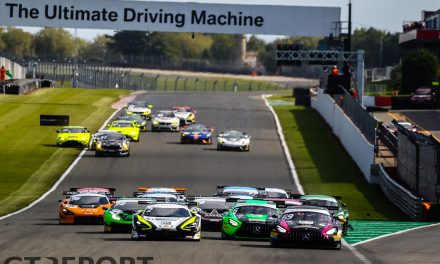 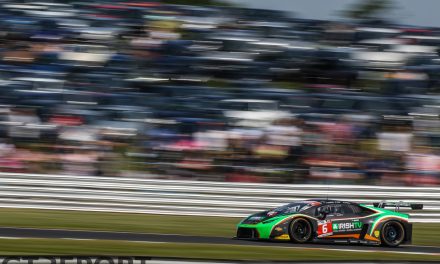