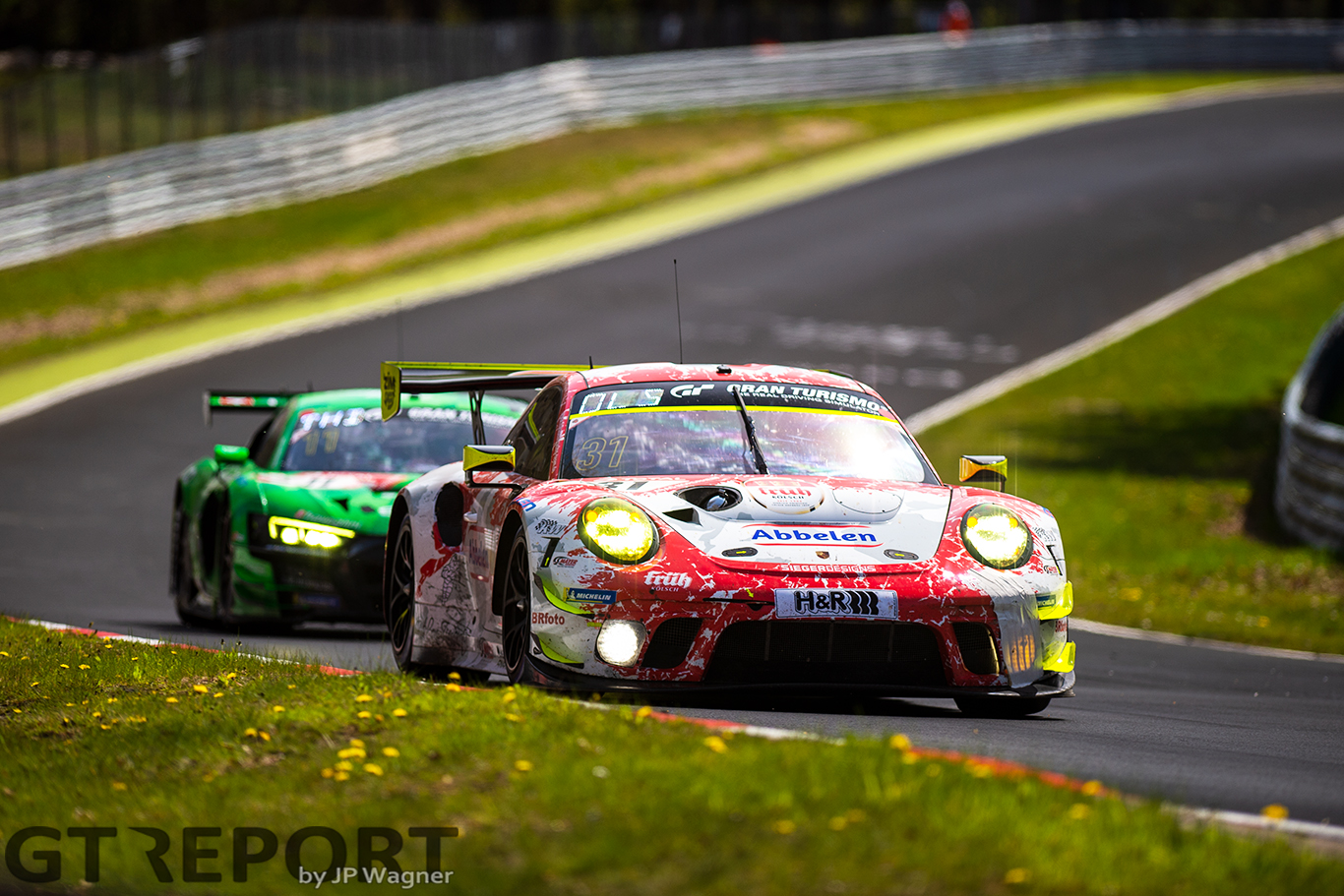 A week after scoring a 1-2 victory in the third VLN Nürburgring Endurance Series (NLS) race of the season, Frikadelli Racing repeated this stunning feat with a do-over in the ADAC 24h Qualifying Race at the Nürburgring. This time the two Porsche 991.2 GT3Rs switched places, giving the #31 Porsche of Maxime Martin and Patrick Pilet – who missed out on the win last week – and teammates Fred Makowiecki and Dennis Olsen the win. Matt Campbell, Mathieu Jaminet, Nick Tandy and Earl Bamber finished second in the #30 sister car.

Fresh off earning pole position, Nicki Thiim (#11 Phoenix Racing Audi R8 LMS GT3) went into the first turn as the leader but was out-dragged coming out of it by Jonathan Hirschi in the #26 Octane126 Ferrari 488 GT3 who had a flying start off the line from third on the grid. Fred Makowiecki (#31 Frikadelli Racing Porsche 991.2 GT3R) grabbed third place, ahead of second-place starter Romain Dumas in the #3 Rutronik Racing Porsche 991.2 GT3R and Axel Jefferies in the #19 Konrad Motorsport Lamborghini Huracán GT3 Evo. The latter two had a run-in a lap later in the Dunlop-Kehre, resulting in a spin for Dumas.

Meanwhile, Thiim had retaken the lead with the all-familiar slipstream pass on Döttinger Höhe at the end of the opening lap, while Makowiecki demoted Hirschi to third going into turn one. The Ferrari’s initial dashing start of the race continued to go backwards as Jefferies made his pass for third on Hirschi followed by Sven Müller in the #44 Falken Motorsports Porsche 991.2 GT3R and the #911 Manthey Racing Porsche 991.2 GT3R of Matteo Cairoli.

Early pitstops came already on lap 4. Jefferies was an unwilling early stopper as the Konrad Lambo suffered a puncture on the Grand Prix Circuit after completing lap 3 – a scenario that repeated itself in the second hour. 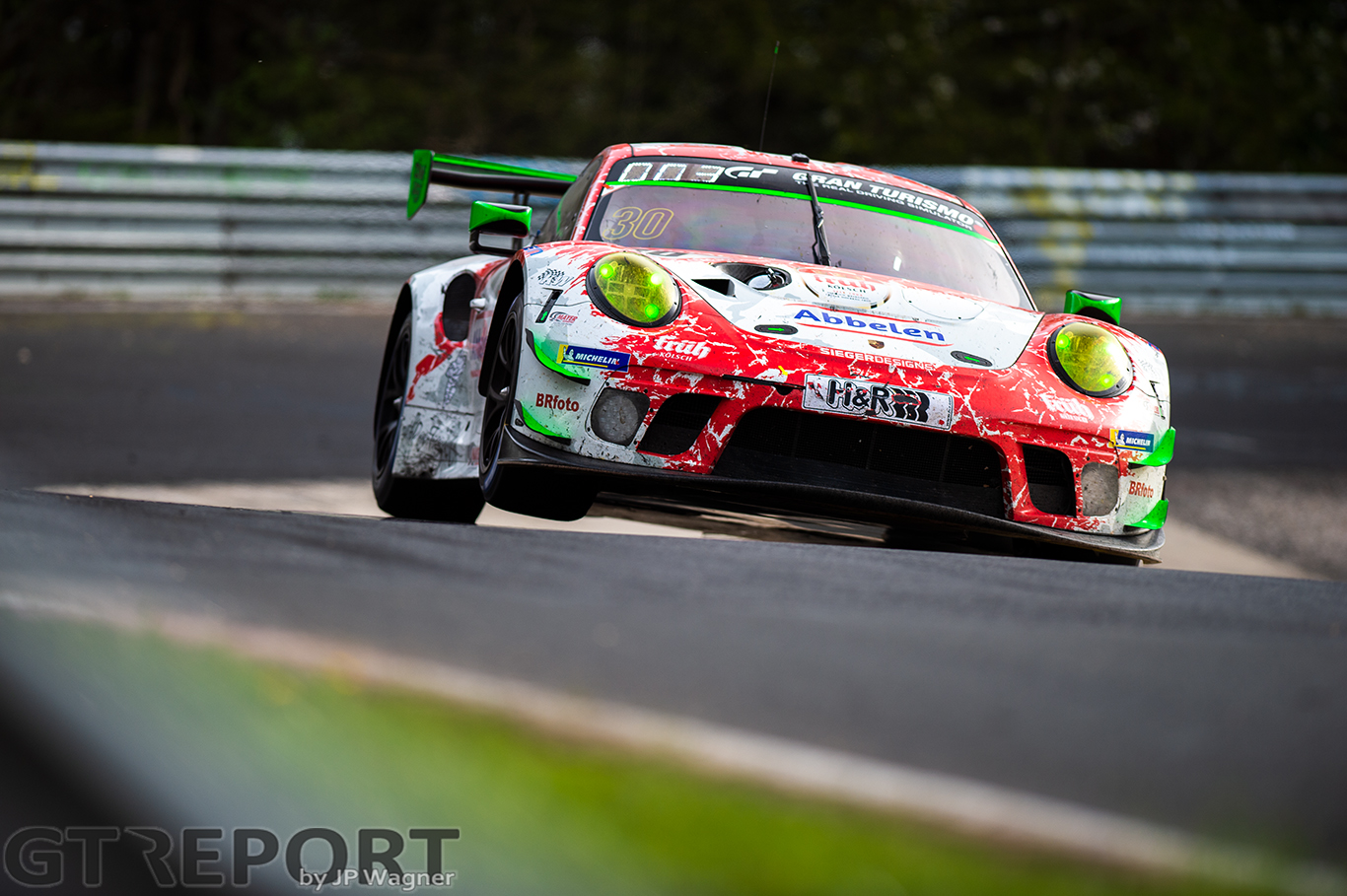 Going into the third hour, Patrick Pilet (#31 Frikadelli Racing Porsche) moved ahead of Stippler (#11 Phoenix Racing Audi) through the pitstops. The two Nordschleife veterans continued their stint running tenths apart. Phoenix Racing finally got first place back half an hour later when Stippler dared Pilet into the high-speed Tiergarten section at the end of Döttinger Höhe, forcing the Frenchman to give up the position.

Stippler’s lead did not last: coming up to a lapped car a minute later, Stippler misunderstood the slower car’s intentions and was forced onto the grass going into the Ford-Kurve as he lost control and spun into the gravel. The uncharacteristic mistake cost him a heap of places, dropping the #11 Phoenix Audi back to sixth where he joined at the back of the pack lead by second-placed Philipp Eng (#1 Rowe Racing BMW M6 GT3), Nick Tandy (#30 Frikadelli Racing Porsche 991.2 GT3R), Daniel Juncadella (#7 Mercedes-AMG Team GetSpeed Mercedes-AMG GT3 Evo) and Matteo Cairoli (#911 Manthey Racing Porsche).

The next few hours saw the #31 Frikadelli Porsche lead the race with Pilet and Maxime Martin taking turns at the wheel. In the battle for second, Lars Kern (#911 Manthey Porsche) eventually had to let Juncadella by, having held the Mercedes-AMG ace behind him for half an hour with seeming ease.

With an hour and 40 minutes remaining, Dennis Olsen rejoined the race from the lead position. Having made his pitstop one lap earlier – after seven instead of eight laps – Manthey Racing’s Cairoli appeared right on the heels of his fellow Porsche driver to take the lead. 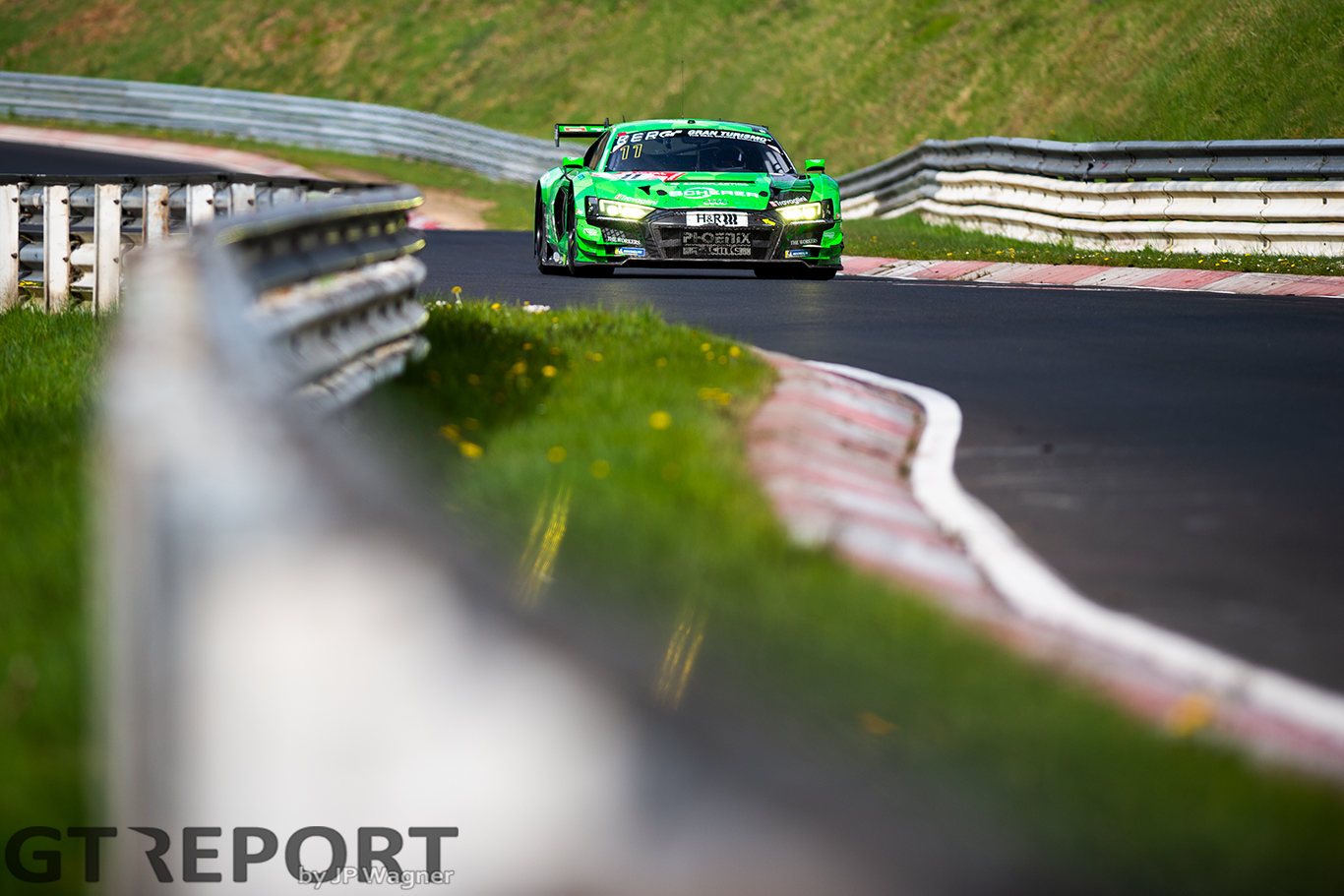 In a similar move – coming in after just six laps – Thiim’s #11 Phoenix Audi emerged out of the pitstop window in third place and seconds away from Olsen and Cairoli.

Unable to drive away from Frikadelli Racing, Manthey Racing made its final pitstop on lap 37 in the knowledge that Frikadelli would be able to go one lap further and with a shorter minimum pitstop time jump the #911 Porsche coming out of the pits.

With the final round of pitstops and strategies out of the way, Olsen controlled the 14-second gap to Kern for the final half hour to cross the finish line in first place after 41 laps. A 67-second post-race time penalty for overtaking over under yellow – which Cairoli said he believed was a yellow-red surface flag – dropped the #911 Manthey Porsche to fifth.

Earl Bamber in the #30 Frikadelli Racing Porsche 991.2 GT3R finished third but was promoted to second following ‘Grello’s’ penalty, making it a Frikadelli double. The winning car from NLS3 profited from a later final pitstop to get in front of the #11 Phoenix Audi.

Phoenix Racing finished in third place. Stippler’s spin turned out too costly to recover from. In the stints that followed, Vincent Kolb, Nicki Thiim and Michele Beretta continued to set quick lap times, showing a potential race-winning pace for the Audi crew going into the Nürburgring 24 Hours. A short six-lap stint by Kolb got the Audi back in the fight for the lead but losing time with an early last pitstop was always a given after that. 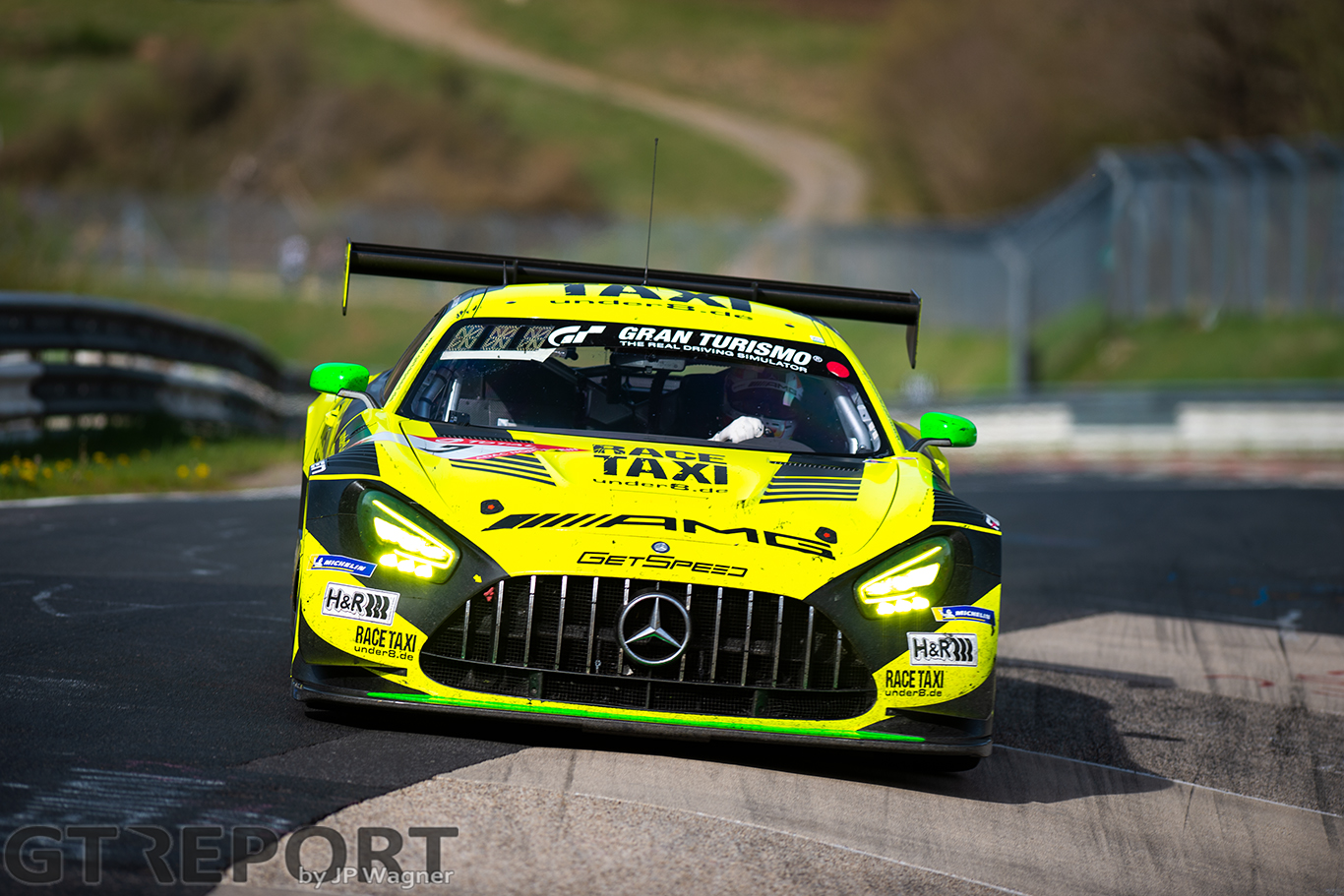 Coming home in fourth place was the #7 Mercedes-AMG Team GetSpeed Mercedes-AMG GT3 Evo of Daniel Juncadella, Maximilian Götz and Fabian Schiller. Always stopping two laps earlier than the leaders following an early first pitstop, the team slowly but surely moved up throughout the six hours, even getting a taste of second place shortly. An early final pitstop gave Juncadella a shot at what would become third place; however, Beretta stood his ground.

With lessons learned from the Qualifying Race, teams now head back to their workshops in preparation of the 24-hours race scheduled for 3-6 June. 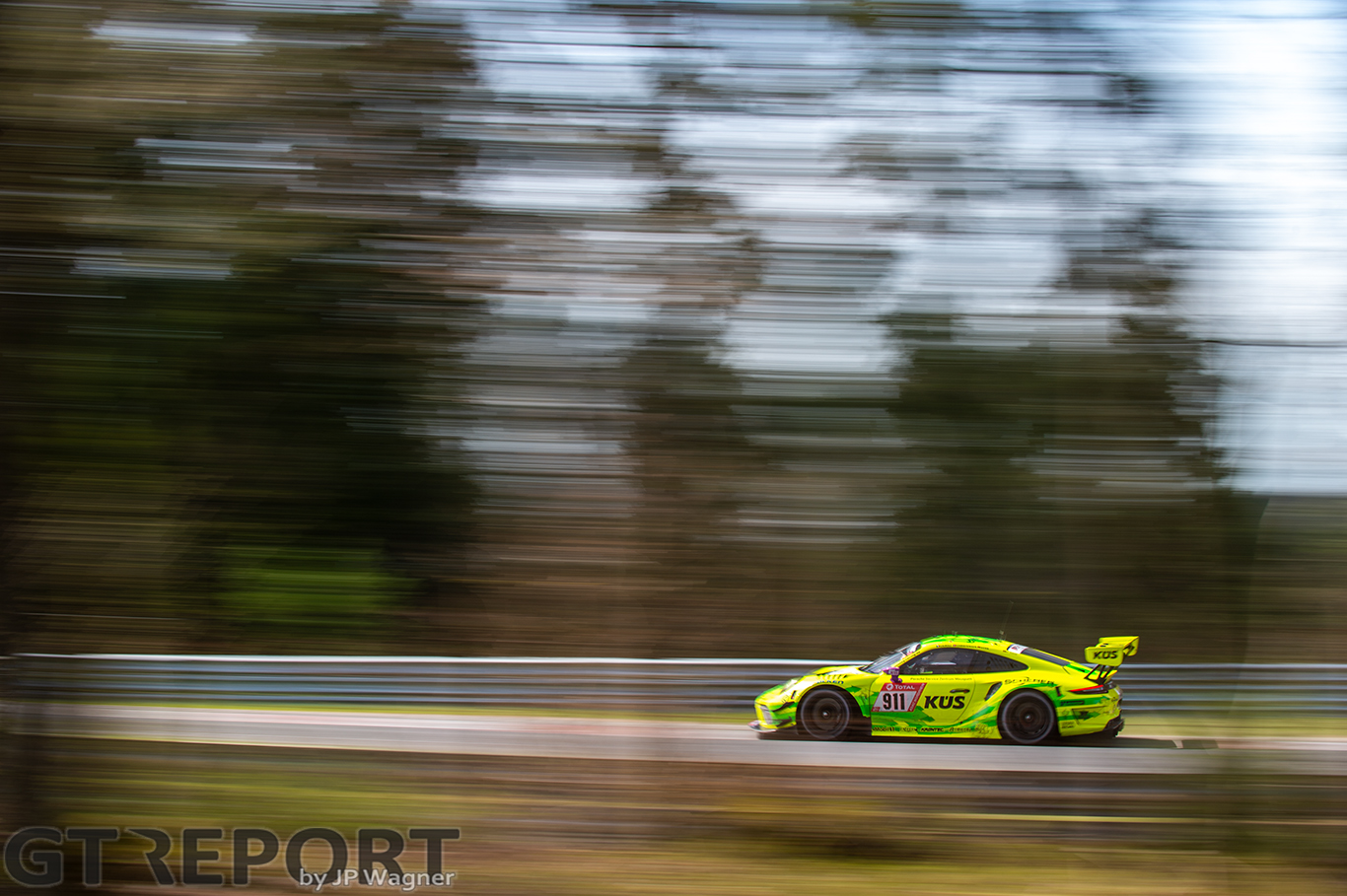 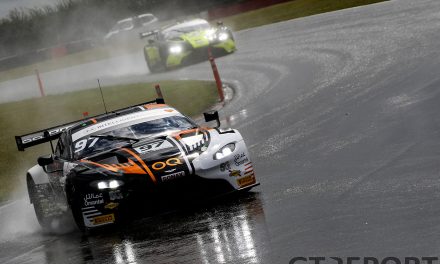 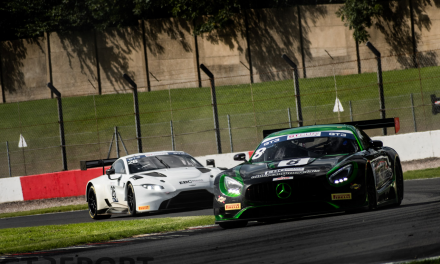 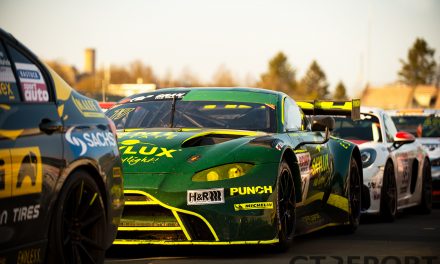 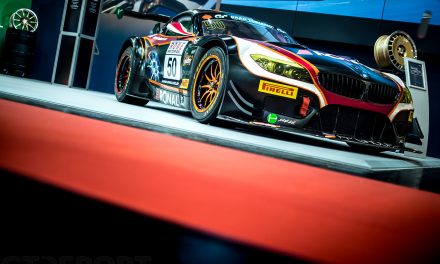