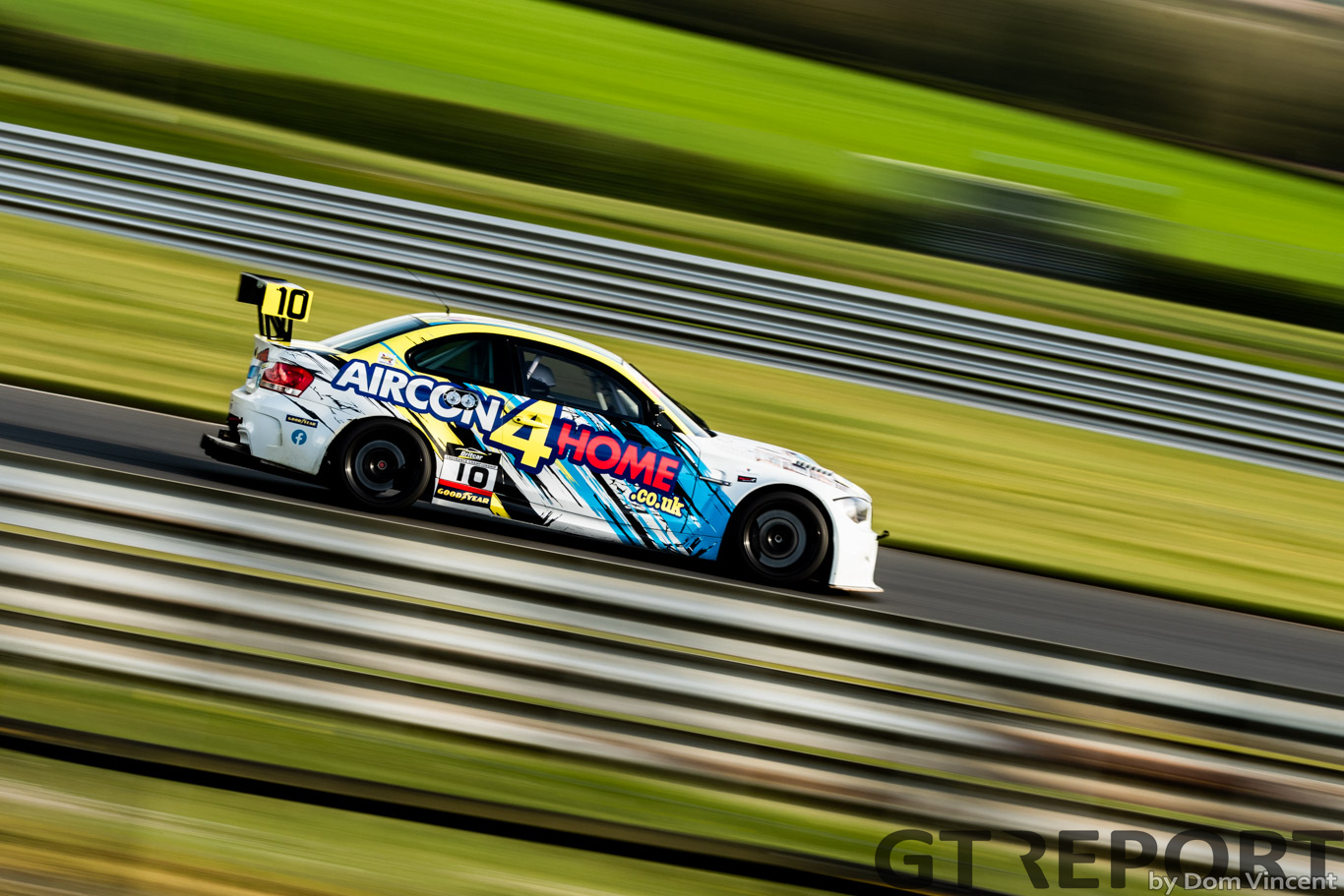 After Saturday saw weather more suited to boats, Sunday was a welcome relief with sunny skies all around. 31 cars took to the track and once again, it was the Woodrow Motorsport BMW 1 Series who claimed the pole for the opening race, albeit this time with a new driver. Ollie Reuben, an experienced historic racer who hadn’t driven the car prior to the weekend.

Due to earlier calamities, the race was shortened from 50-minutes to 45-minutes. This didn’t limit the action with a nailbiting finish between the two frontrunners being the highlight of the race.

At the start, it was Jas Sapra in the Simon Green Motorsport BMW E46 M3 who absolutely blitzed the field and stormed off into an early advantage. Simon Baker in the Woodrow 1 Series dropped to fourth after starting from the pole and would make up one position before the pit window opened.

After the debacle in Saturday’s final race, the pit windows were staggered in order to avoid a repeat of such an incident. Classes 1, 3, and Clio would utilize the first 10-minute window with Class 2 using the second 10-minute period as they featured almost half of the field.

Behind the Class 1 leaders, the Ramen Racing Ginetta G40 of Andrew Bentley was keeping the faster cars honest whilst leading Class 2. Not far behind, the Ginetta G20 of Steve Griffiths continued its strong form and led Class 3. 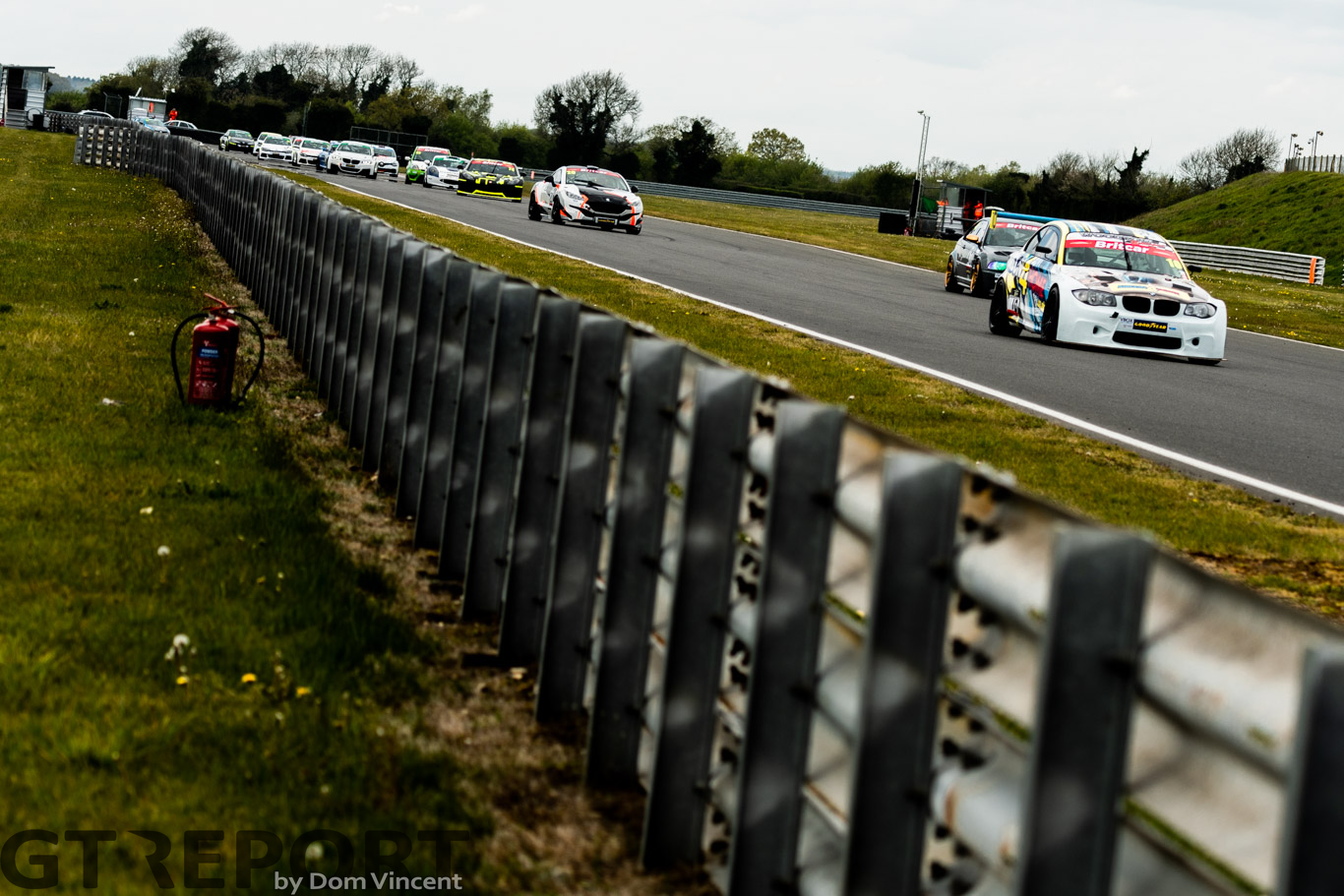 The panel bashing Clios were at it once again. An intense battle for the lead saw Aaron Thompson in the Westbourne Motors Clio switch places with teammate James Colburn as they attempted to gain the upper hand.

With the pitstops out of the way, Mark Lee in the SVG Ginetta G56A assumed the head of the field with Ollie Reuben, Charlie Campbell in the Peugeot RCZ, and Kester Cook in the Ford Fiesta all lining up behind him.

It was a scruffy outlap for Campbell as he ran wide at Murray’s, whilst Reuben looped the car at the Wilson hairpin but quickly got things under control and set about chasing Lee for the lead.

It wasn’t long before he was all over the rear of the Ginetta after lapping over 2-seconds per lap quicker, but with time running out, he utilized the immense power of the straight-six engine to surge past the Ginetta along the Bentley Straight. This was set to be the final lap but Reuben’s pace saw him cross the line with one second to go in the race. This didn’t phase him and he came home 2-seconds clear of Lee. Cook took a distant third to round off the Class 1 podium.

Jas Sapra likely would have been in the top three had it not have been for his stop/go penalty for a pit stop time infringement. Ultimately finishing in fifth overall behind the Class 2 winner. 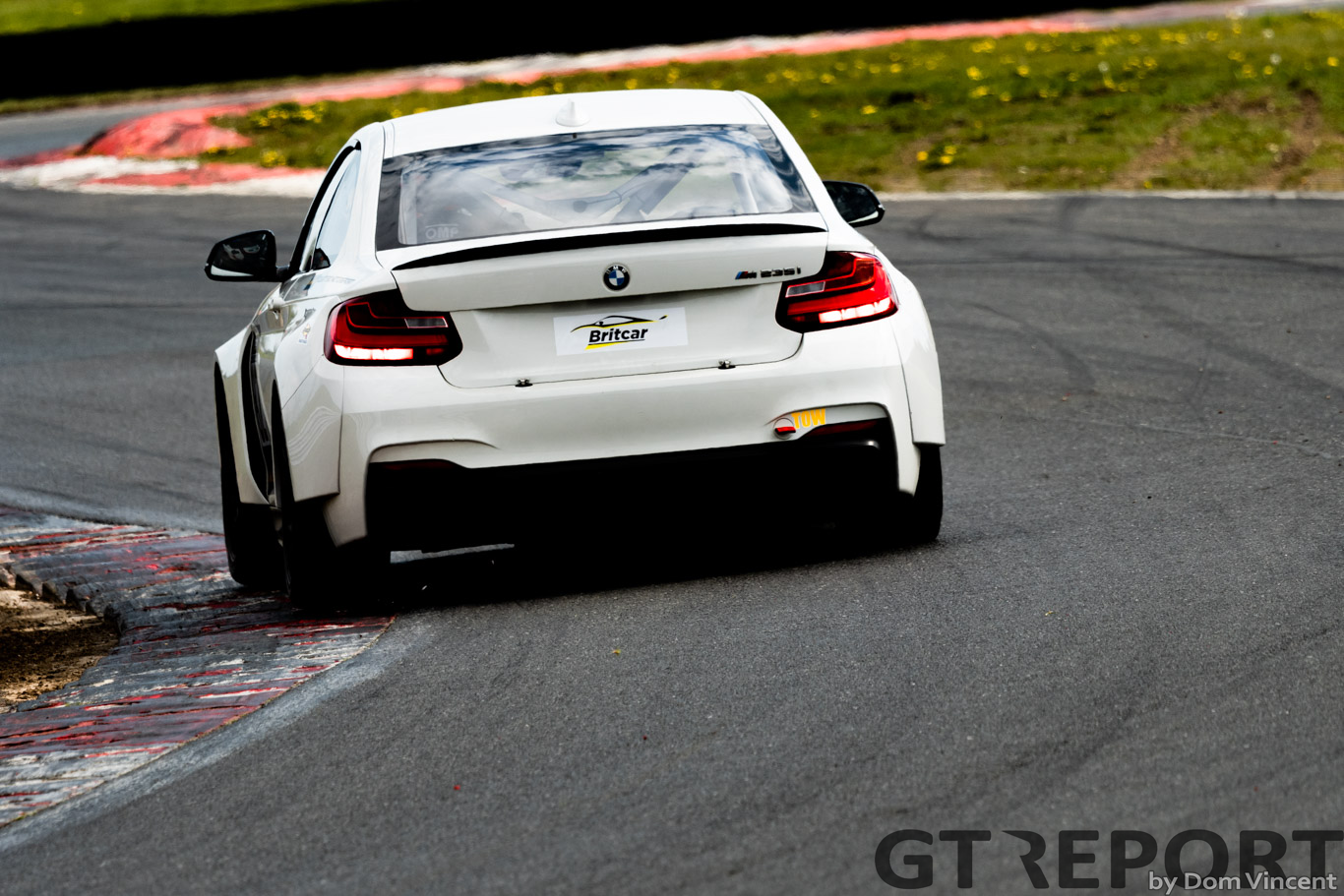 Class 2 was also decided by a penultimate lap lead change. Peter Spano had taken over from Bentley in the Ginetta, whilst Richard Evans in the Quattro Motorsport BMW M240i had the upper hand over Spano and was gradually reeling him in. It would come down to a lunge into Murrays that would see the BMW take the class lead and victory by 4.4-seconds.

Class 3 was once again dominated by the Ginetta G20 with Griffiths handing over to Jamie Vinall-Meyer who brought the car home a lap clear of their nearest rivals Steve / Edward Cook in their Honda Civic.

The Clio class was eventually decided in favor of Steve / Aaron Thompson who were able to gap Sarah Franklin after she took over from James Colburn.

After dropping back in the earlier race, Jas Sapra was a non-starter for race 2 having already left the circuit by the time the green flag dropped.

Ollie Reuben started the Woodrow BMW this time around and with no one alongside him on the front row, was able to clear off into the distance and escape the battle for second that was brewing.

Cook had managed to just sneak ahead of Rob Smith in the Peugeot RCZ at the start with a multitude of position changes taking place throughout the opening tour of the circuit. Mark Lee was able to capitalize on this and claw himself into the battle.

After mechanical issues in qualifying, Team BRIT’s BMW M240i was out of position but Matty Street was having none of it. Passing no fewer than nineteen cars on the first lap alone, an impressive feat despite being in faster machinery. Ultimately they would not feature in the battle for the rostrum placings and finished down in thirteenth place.

Further down the order, Richard Evans had taken control of Class 2 and set about building up an early advantage before Bentley reclaimed the wheel of the Ginetta and reeled him in.

Class 3 saw a touch of mayhem as Ivor Mairs spun his Paul Sheard Racing Mazda MX5. No harm was done here but later on Anthony Hutchins in the Amigo Porsche Boxster and Paul Dehadray’s JW Bird VW Scirocco came together at Nelson and promptly ended both of their races.

Meanwhile, Colburn and Thompson resumed their battle for the Clio class lead but ultimately it would be the reigning champions in the Thompsons who would rack up their third victory of the season with Colburn / Franklin taking the runner-up position. 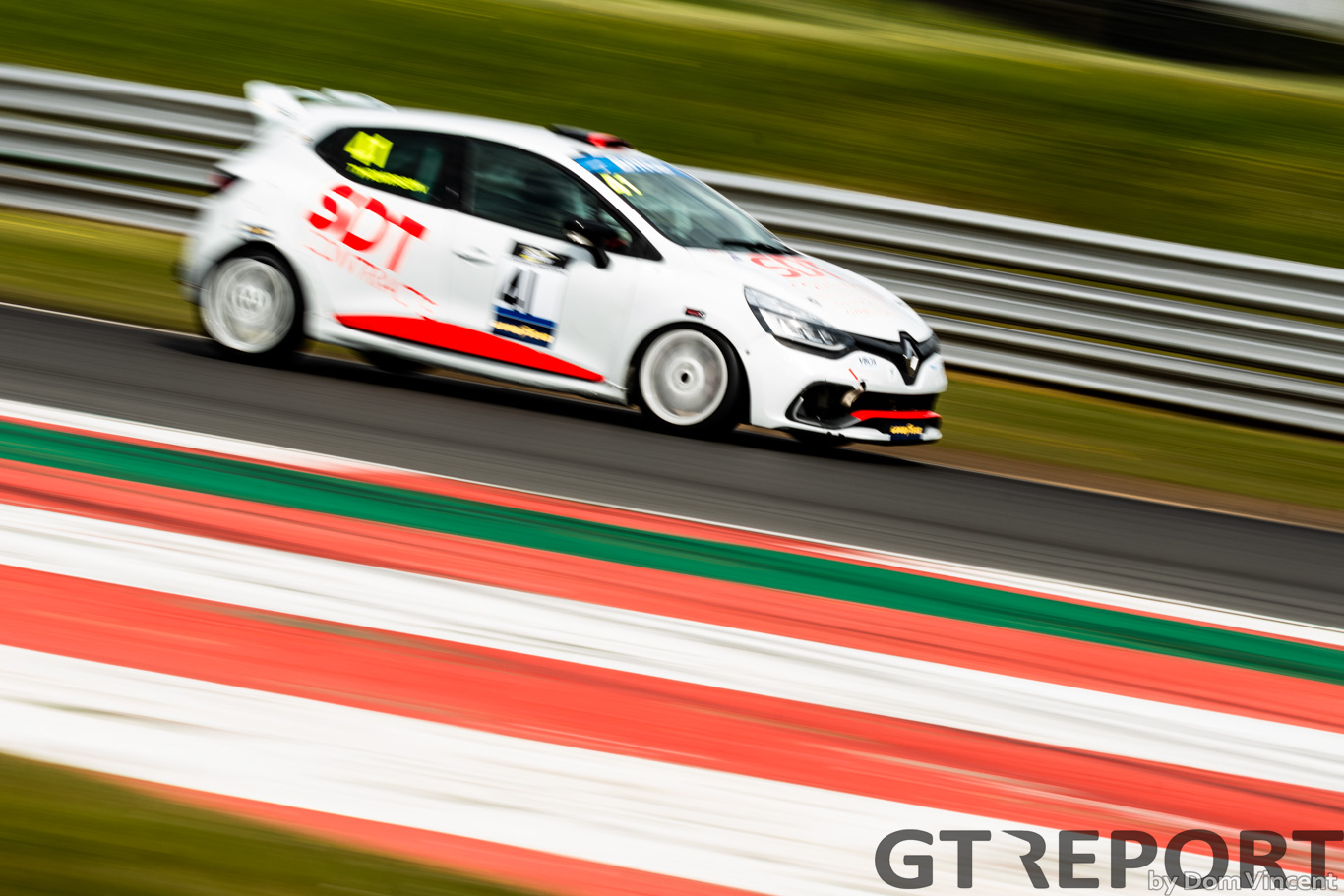 Next up came the pitstop window which saw Baker take over from Reuben and emerge 15-seconds clear of Lee in the Ginetta. What transpired next was a sensational drive from the Ginetta man as he constantly took 4-seconds per lap out of the leading car. Baker had thought his advantage was enough and had backed off, he realized just in the nick of time as Lee made a move down the inside of Murrays on the final lap to take the lead. Being able to take the better line, Baker squeezed onto the power earlier and got the slingshot to the line. Taking victory by just 0.341-seconds from Lee in one of the closest Britcar finishes of all time.

Whilst Cook may have been a distant third, his drive was no less impressive as brake issues had hindered his performance all day long yet he still managed to bring the car home in one piece ahead of the Peugeot RCZ.

Class 2 saw another win for Evans and his BMW but with the top three separated by just 10-seconds at the flag, he couldn’t take it easy. Richard Higgins in the County Classics Porsche 911 kept him honest all race long whilst Andrew Bentley ran out of time in the Ramen Racing Ginetta as he was lapping over 2-seconds per lap faster than the two ahead of him. He would come home in third after a successful day.

Class 3 once again sees the very impressive Ginetta G20 of Griffiths / Vinall-Meyer take their fourth successive class win. This consistency places them joint first in the overall standings with the Woodrow BMW being the only other car to match their pure consistency over the four races thus far. Vinall-Meyer was also awarded the Britcar driver of the day award for his consistent running all day long. 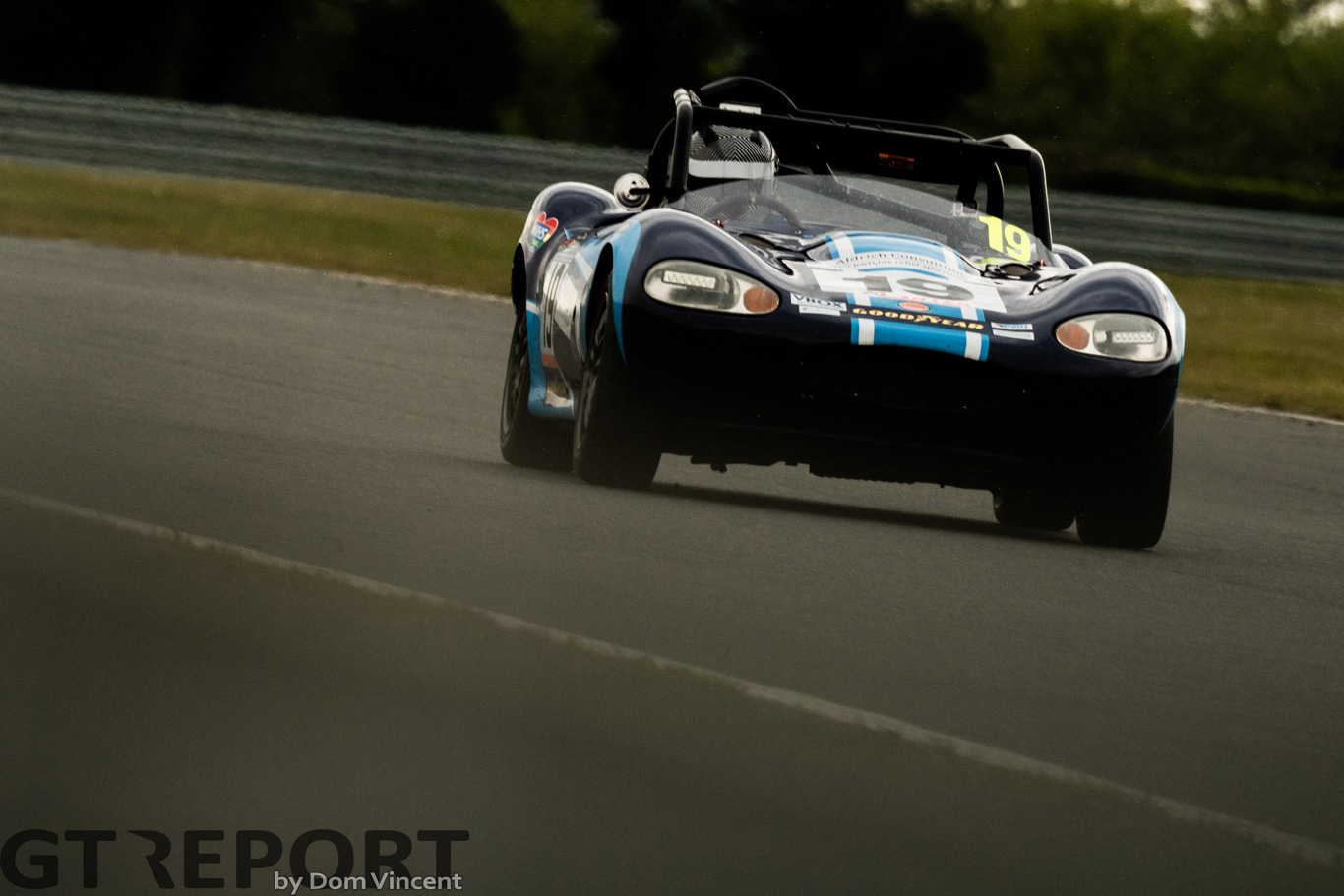 The Cook duo claimed yet another second-place finish whilst Barry MacMahon was only 5-seconds behind them in his new Alfa Romeo Giulietta which has already shown great improvements from the opening round at Silverstone.

The next round for the Trophy Championship is Silverstone on the GP Circuit on the 4th of July with the Endurance car taking to the track the day before. 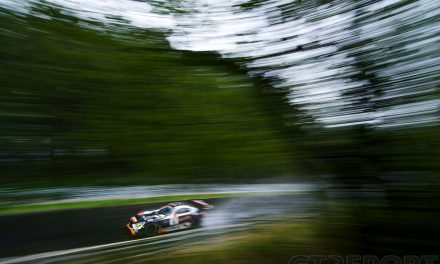 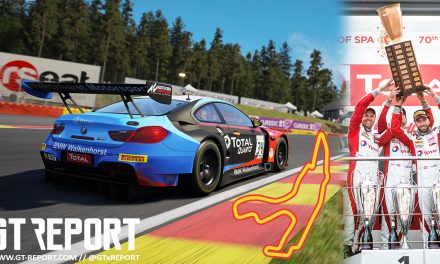