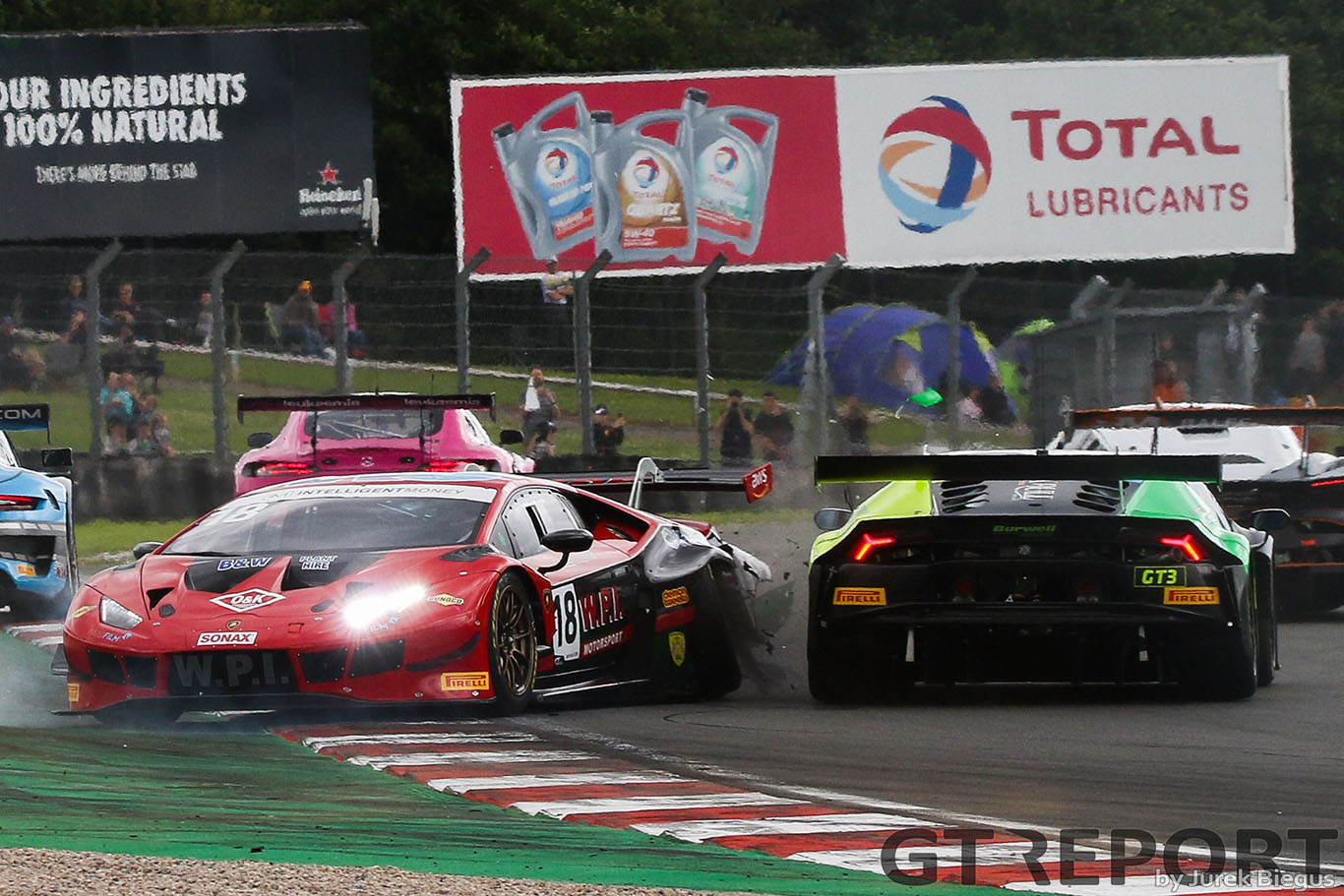 GT4 took the brunt of the carnage, with only five of the 13 entered cars taking the chequered flag, as Century Motorsport carried on its fine form so far in 2021 to take a one-two in the secondary class.

The attrition started at the very first corner of the race. Heading into Redgate, Michael Igoe – starting second – and Nick Jones, who made a good start to move up to third, had a coming together going into the corner which sent Igoe’s WPI Motorsport Lamborghini into a spin.

Spinning right on the outside edge of the track, Igoe’s Huracán was clipped by the similar Barwell Motorsport example driven by Leo Machitski – Igoe powerless to stop from spinning into the path of the Russian, who was equally powerless to avoid the collision. The result was extensive right-rear damage to the WPI car – which the team were busy repairing in the paddock well after the chequered flag flew – and left-front damage to Machitski’s car which also put him into retirement. 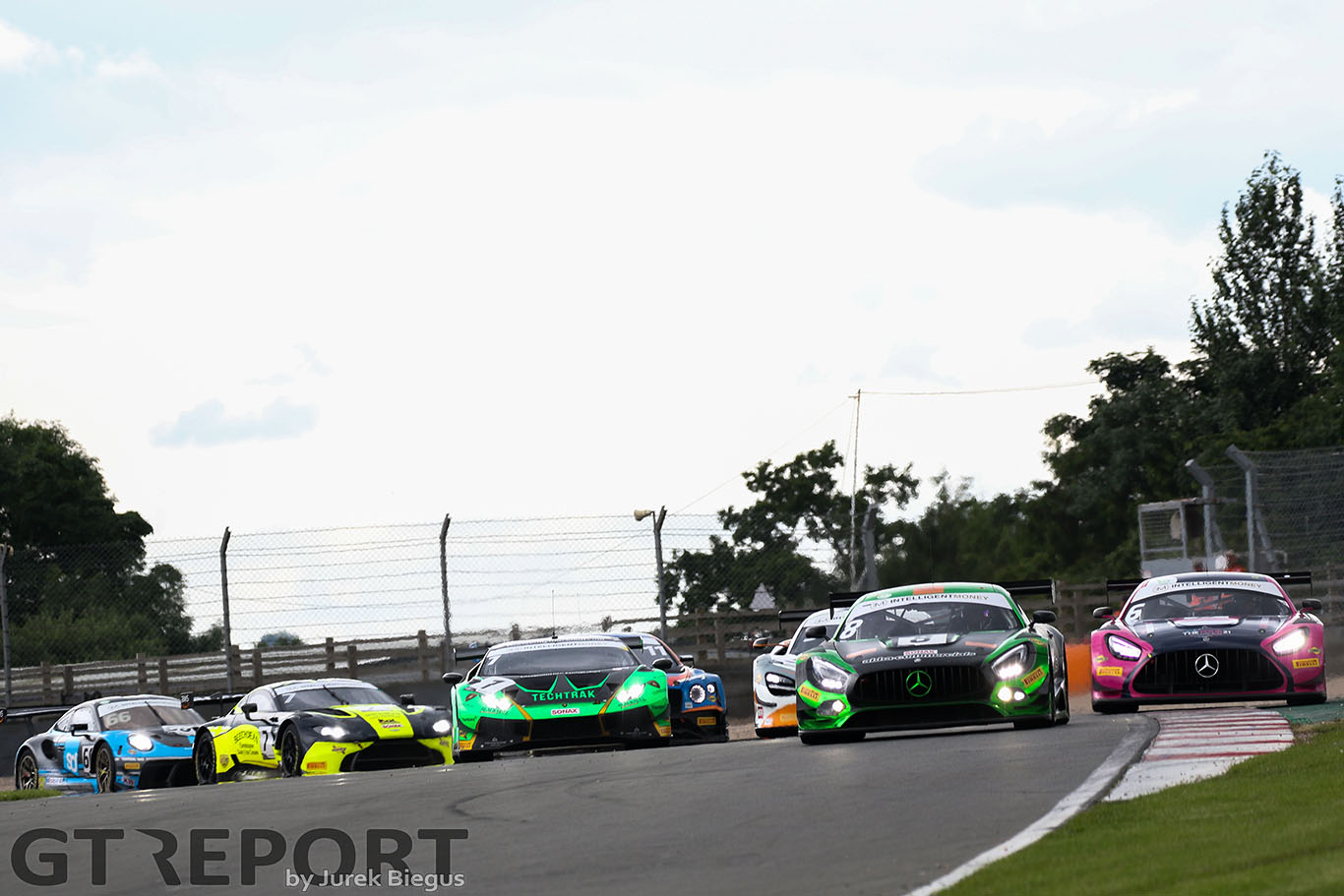 Amidst the chaos, Richard Neary propelled himself from 10th – relegated to the back of the GT3 field after Sam’s spectacular brake failure in Free Practice Two – into second, thanks to “picking the right line and having some good luck” which put him right on the back of pole-sitter Ian Loggie.

As the safety car came back in, a good launch from Loggie gave him some breathing space in the RAM Racing Mercedes, but he didn’t get to enjoy it for long as a second safety car was called for after just one full racing lap.

That’s because there was chaos in GT4, as a collision at McLeans took out the #90 Balfe Motorsport McLaren 570S of Ash Marshall, the Assetto Motorsport Ginetta G56 and the #3 Team Rocket RJN McLaren – which limped back to the pits but was forced to retire.

When the race restarted for the second time, Neary didn’t hesitate again as he got a great run on Loggie and made the decisive move going into Redgate.

With that move made the lead battle settled down somewhat with Loggie never letting Neary get too much of a gap as the focus of the action shifted back down the order slightly.

In the chaos of the opening laps, Kelvin Fletcher had moved the Paddock Motorsport Bentley Continental GT3 into third but found himself under constant pressure from rivals behind. 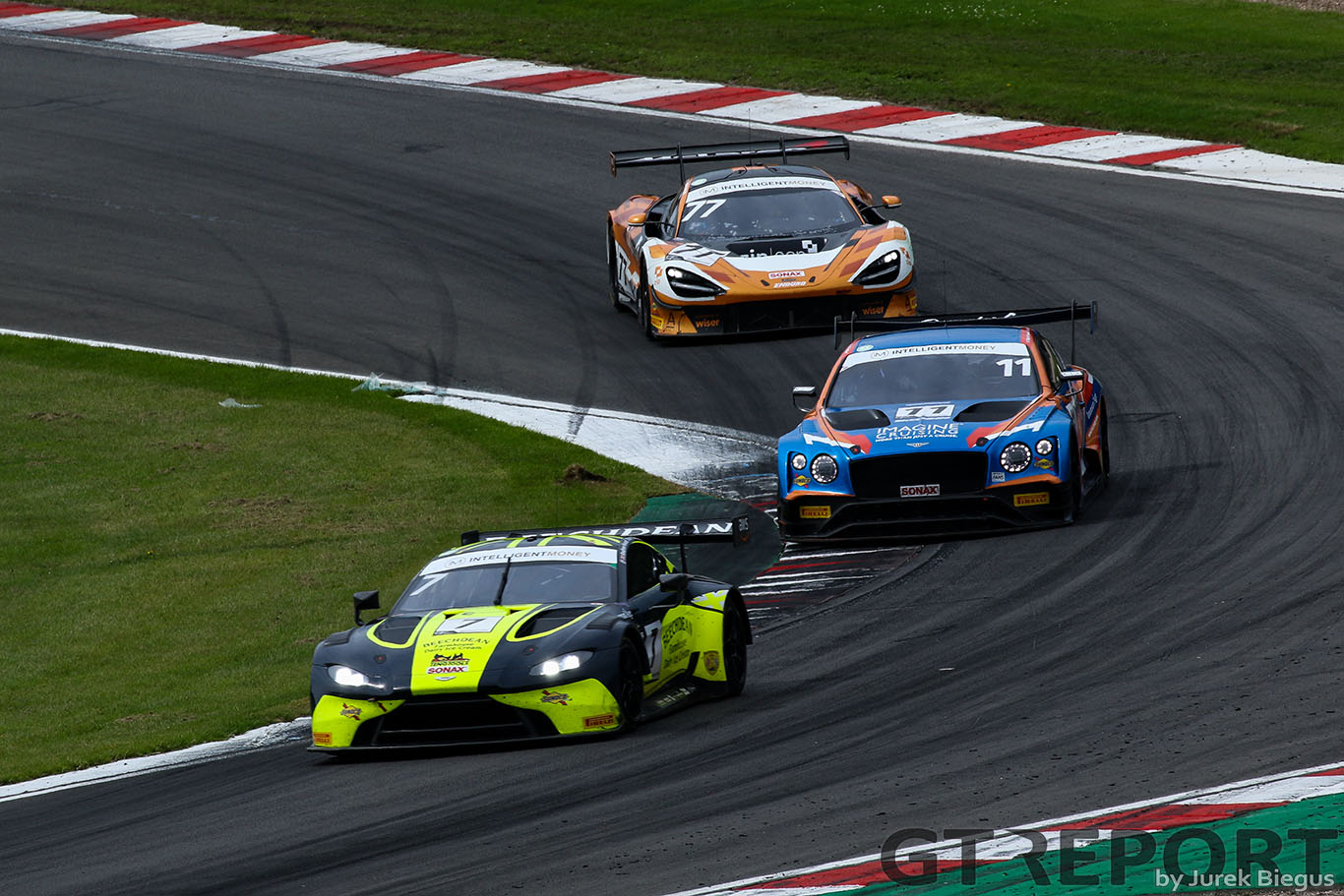 First, he did battle with was Adam Balon’s Barwell Motorsport Lamborghini. The Huracán was clearly faster through the corners, but a combination of Fletcher’s stout defence and the Bentley’s better top speed kept him ahead for a time.

However, as the stint wore on, so did the tyres, and just before the 60-minute mark it was clear to see that Fletcher was doing everything he could to stretch out their life. It wasn’t to be, though, as running slightly deep into the final corner gave Balon his opportunity to move up into third after a long pursuit.

One lap later and Fletcher was relegated to fifth as Andrew Howard pulled off a textbook cut-back going into Redgate and used the momentum of his Beechdean AMR Aston Martin Vantage to steal away fourth going down the Craner Curves.

Into the pit window and the leaders all pitted at the earliest possible moment, with Richard handing over to Sam who came out with a handy lead over Yelmer Buurman – taking over from Loggie – as the latter had to serve a ten-second penalty for a podium at Silverstone.

The gap started at just under 12 seconds but expanded out to over 16 as, in Sam’s words, he “pushed for a couple of laps at the start, and then just managed it from there.” Despite a trouble-free run for Buurman, he couldn’t overcome the success penalty deficit and took second. 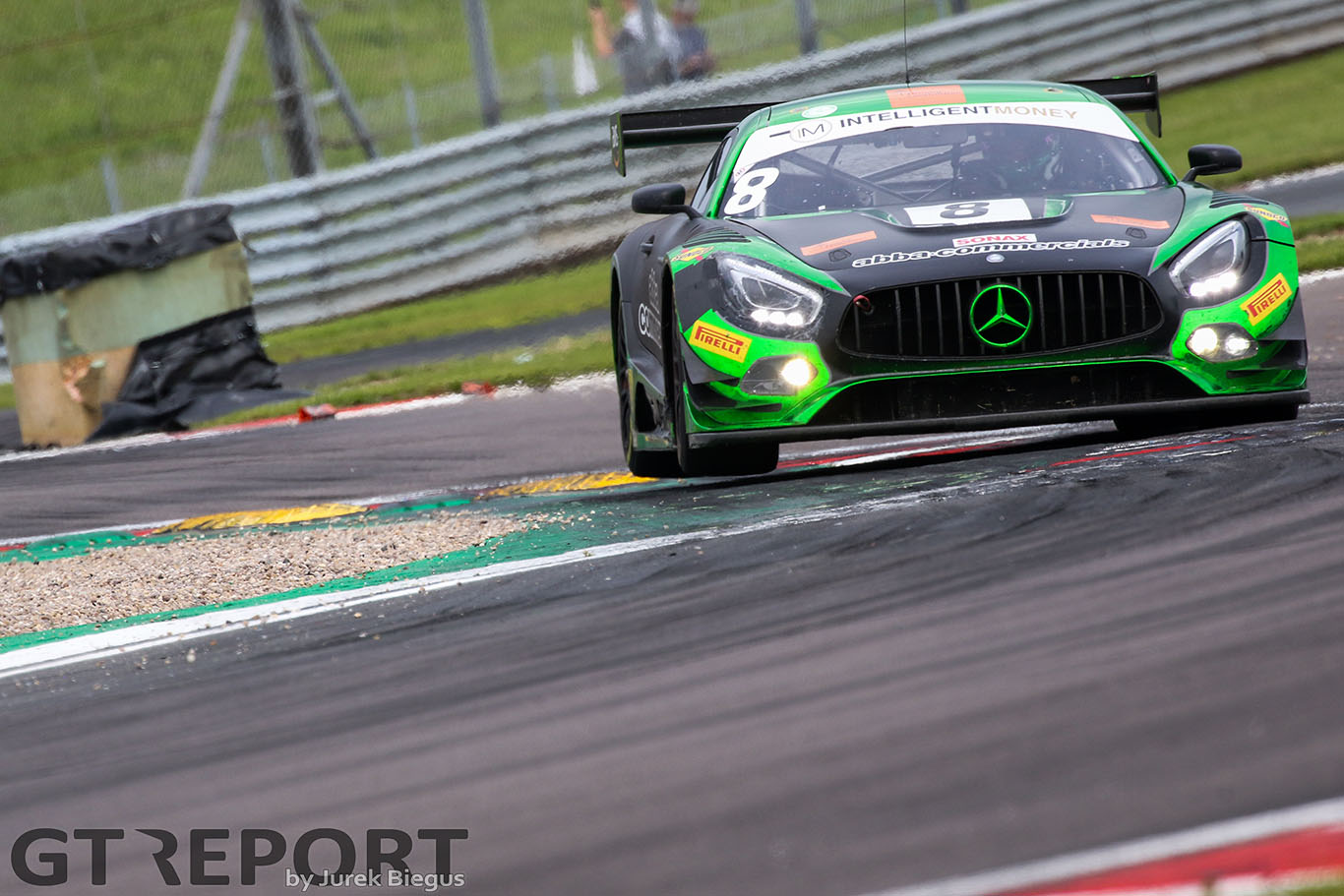 His perfect race management meant the Team Abba Racing crew finally overcame the bad luck that has cursed the team in recent races and was the perfect antidote to a Silverstone event in which Richard pulled off a similarly remarkable stint only to retire with a gearbox fault after the first round of stops.

Sam said: “It feels like our luck has changed, it was a great job by the team to get the car out – it was 50/50 for a while – and we knew we’d be quick, for me getting the gap over Yelmer was a big confidence boost too.”

While missing out on a win is never something any drivers want, banking a solid haul of points has put Loggie and Buurman into a share of the championship lead with Andrew Howard and Jonny Adam – aiding Loggie’s objective of targeting the championship in 2021.

Third went the way of Adam and Howard, but Adam was very fortunate in his stint that he didn’t get pushed down to fifth. That’s because he was having to use every ounce of his experience to keep Enduro Motorsport’s Marcus Clutton behind.

That Clutton was so close to the podium was a testament to the quick pace he and Morgan Tillbrook showed throughout the race, with Clutton scything his way through the pack to get onto the back of the Beechdean Aston.

Quicker than the Aston through sector three, Adam had to position his car absolutely perfectly to ensure Beechdean took a second podium of the season – praising Clutton after the race for being “fast but fair” during their scrap, with Clutton preferring to keep it clean and bank points rather than do anything too risky. 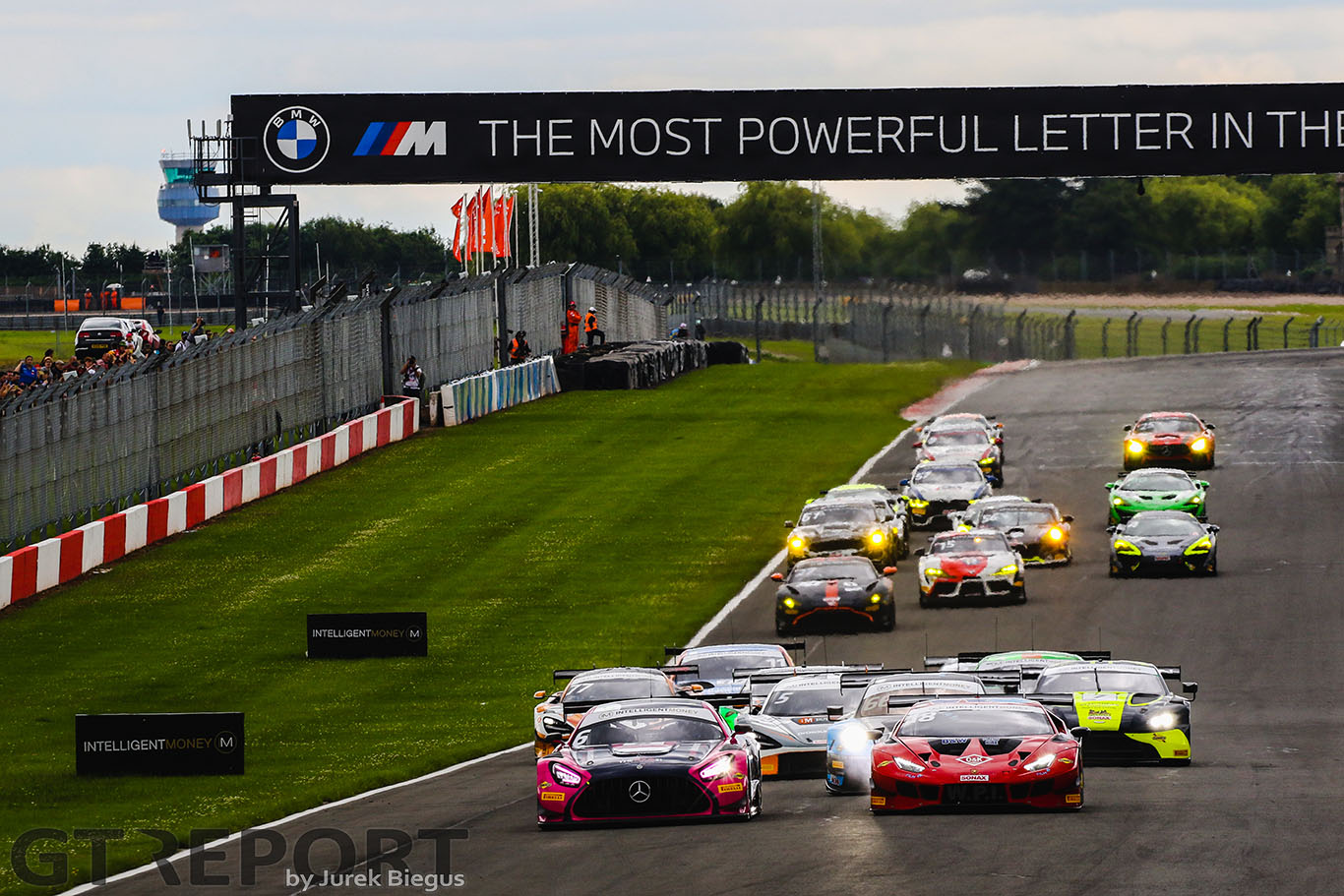 He was possibly forced into that slightly too, as the mirrors of his Mclaren 720S GT3 were filled with Sandy Mitchell’s Lamborghini. The reigning champion took over the car from Balon with a large deficit – thanks to a 25-second success penalty from Silverstone – and proceeded to power up the field and onto the back of the third-placed squabble.

Despite his efforts, he couldn’t find a way past Clutton and finished fifth – now tied for third in the championship with the Nearys. They’re all on 52.5 points, 15 behind the lead two.

Sixth went to Stewart and Lewis Proctor’s Balfe Motorsport McLaren 720S GT3, the duo having a good – if quiet – run in their car, the highlight a cracking move from Lewis at the Old Hairpin to steal away the position from Martin Plowman’s Bentley.

The Bentley ultimately finished seventh and last of the GT3s. The struggles Fletcher was having to deal with in his stint continued when Plowman took over for the final stint and despite his best efforts he couldn’t make any progress up the order.

After a promising run in practice and qualifying, joining the other retirees was the Team Parker Racing Porsche 911 GT3 R – Scott Malvern having to pull the car into the garage with what is suspected to be a gearbox problem in that car. 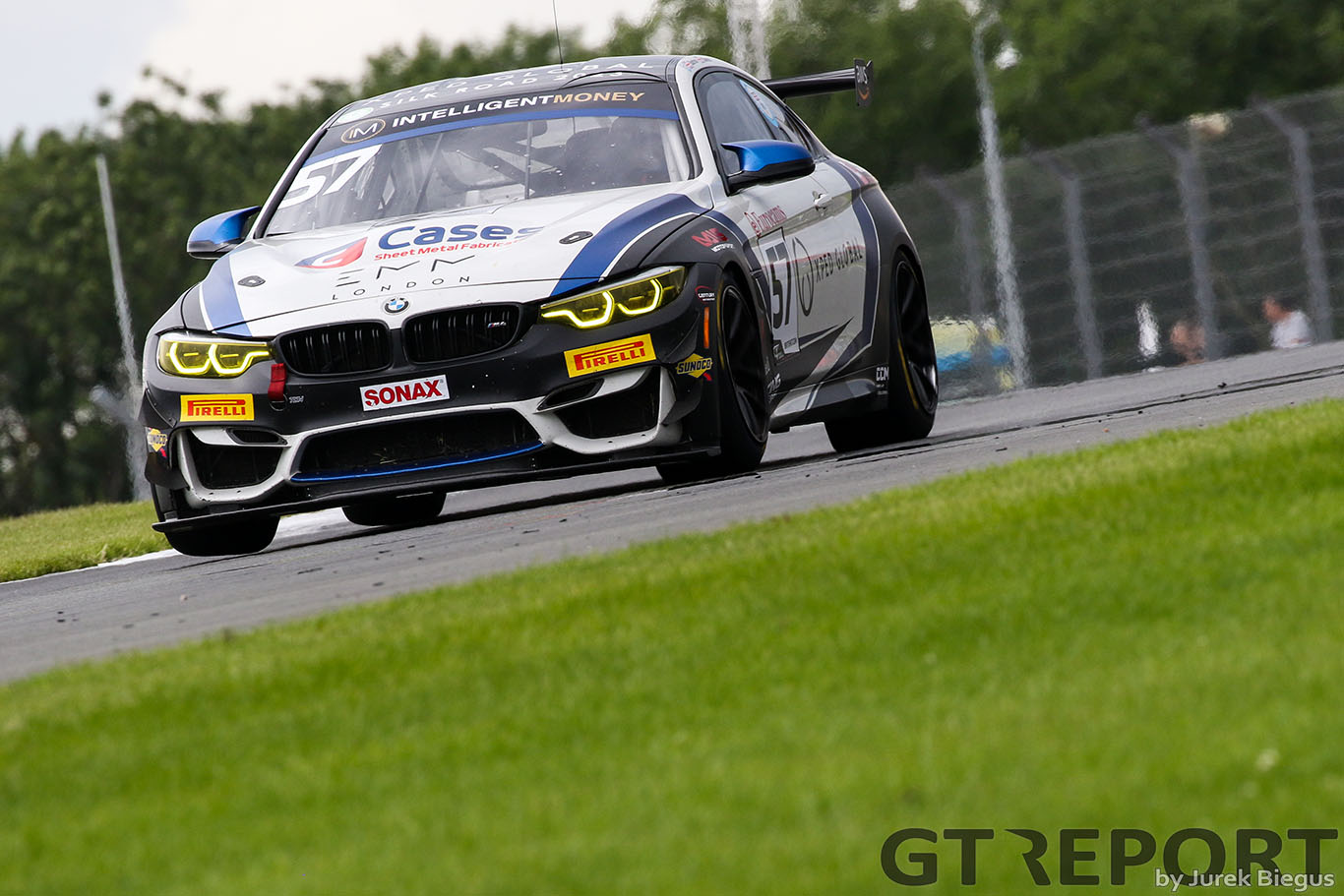 GT4 really descended into a survival of the fittest, with only five cars finishing in the class. In addition to the incident that put the Balfe and RJN McLarens into retirement alongside the Ginetta and Matt Topham’s Newbridge Aston – which seemed to pick up quite significant front-end damage unseen by the cameras on the far side of the circuit – another multi-car incident took out more competitors.

That was instigated by John Ferguson’s Toyota Gazoo Racing UK Supra. Heading through the final corner of Goddards, the Supra seemed to tip the #4 RJN McLaren of Harry Hayek into a spin on the exit of the corner as they tried to squeeze each other. The out-of-control McLaren then collected Will Moore’s Academy Motorsport Ford Mustang which spun close to the finish line.

All three were forced to retire with a variety of ailments, with Ferguson dragging the Toyota back to the pits with a completely broken front-left corner.

Combine that with Richard Williams having to pull over the Steller Motorsport Audi R8 LMS on Exhibition Straight with a suspected repeat of the electrical gremlins that hampered the team during practice, and there wasn’t too many cars left to fight it out.

Not that there was an opportunity to challenge for the lead. Throughout the start and the three restarts – a third safety car was called for to retrieve the Supra’s splitter which was knocked off in an earlier incident with the Academy Mustang – Will Burns was completely untroubled behind the wheel of the #57 Century Motorsport BMW M4 GT4.

Building his lead up to more than 30 seconds, Burns handed over to Gus Burton and the pair raced off into the sunset to take a dominant victory for the team. 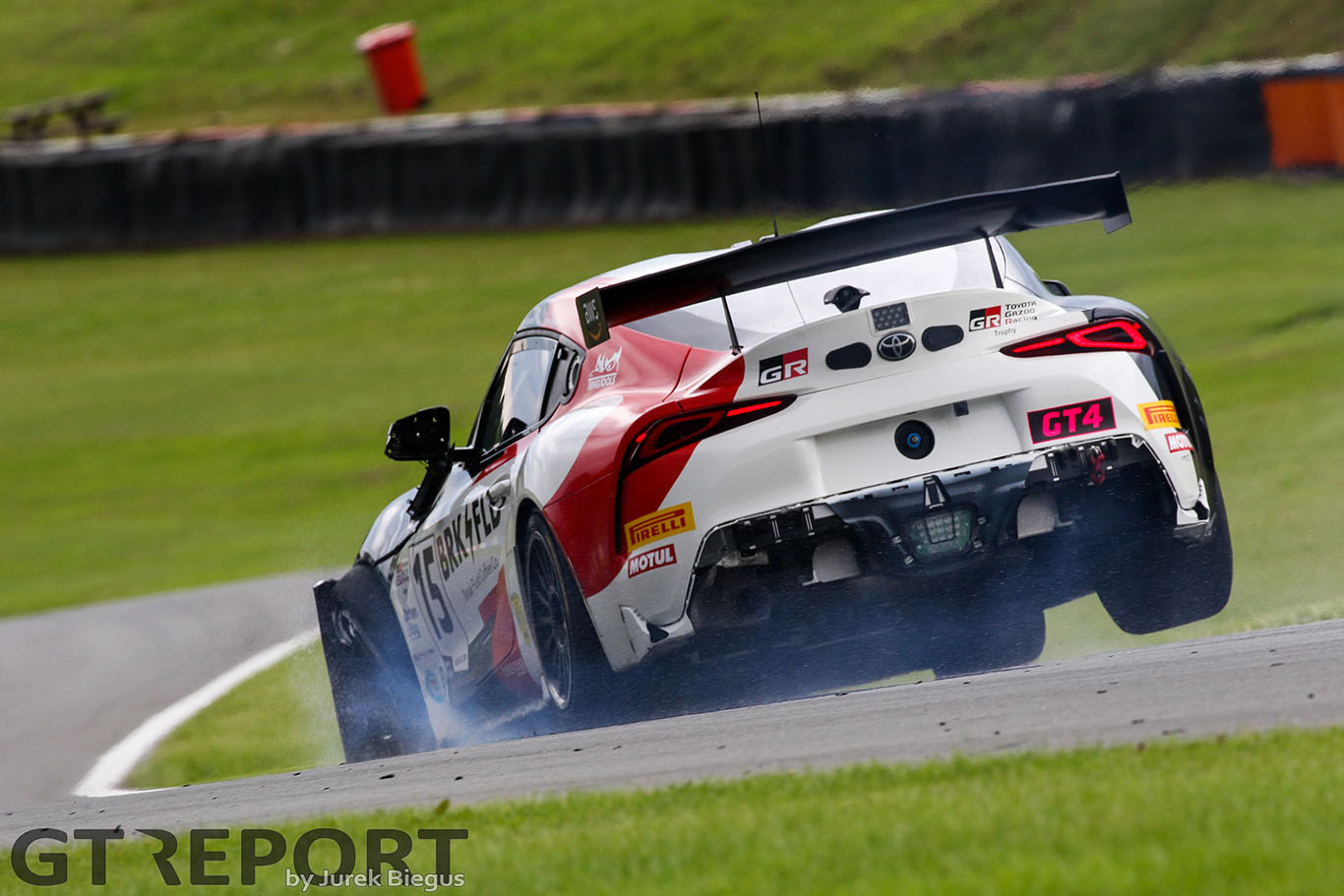 It was slightly trickier to make it a one-two. After being penalised in the opening stint for causing a collision, Chris Salkeld recovered from his ten-second stop/go penalty to fight his way back into a good position to hand the car over to Andrew Gordon-Colebrooke for the second stint.

Gordon-Colebrooke was rapid behind the wheel and didn’t put a foot wrong as he pulled off a great move on Jamie Stanley to take third going into the left-handed Goddards, and then quickly reeled in and passed James Kell’s RJN McLaren to secure second.

Stanley finished third in the Fox Motorsport McLaren 570S he’s sharing with Nick Halstead, having made easy work of passing Kell, who was struggling with what appeared to be rear-right damage on his car which was robbing him of pace.

Despite a spin with ten minutes remaining, Ciceley Motorsport secured fourth – and a Pro/Am podium – as Jake Giddings recovered from his off-track excursion at Hollywood to re-take the position from Kell, who finished last of the classified runners in the car co-driven by Jordan Collard.

The next round of the Intelligent Money British GT Championship takes the field across the channel to Spa-Francorchamps with a two-hour race to kick off SRO’s Speedweek on July 24/25 – the weekend before the Spa 24 Hours. 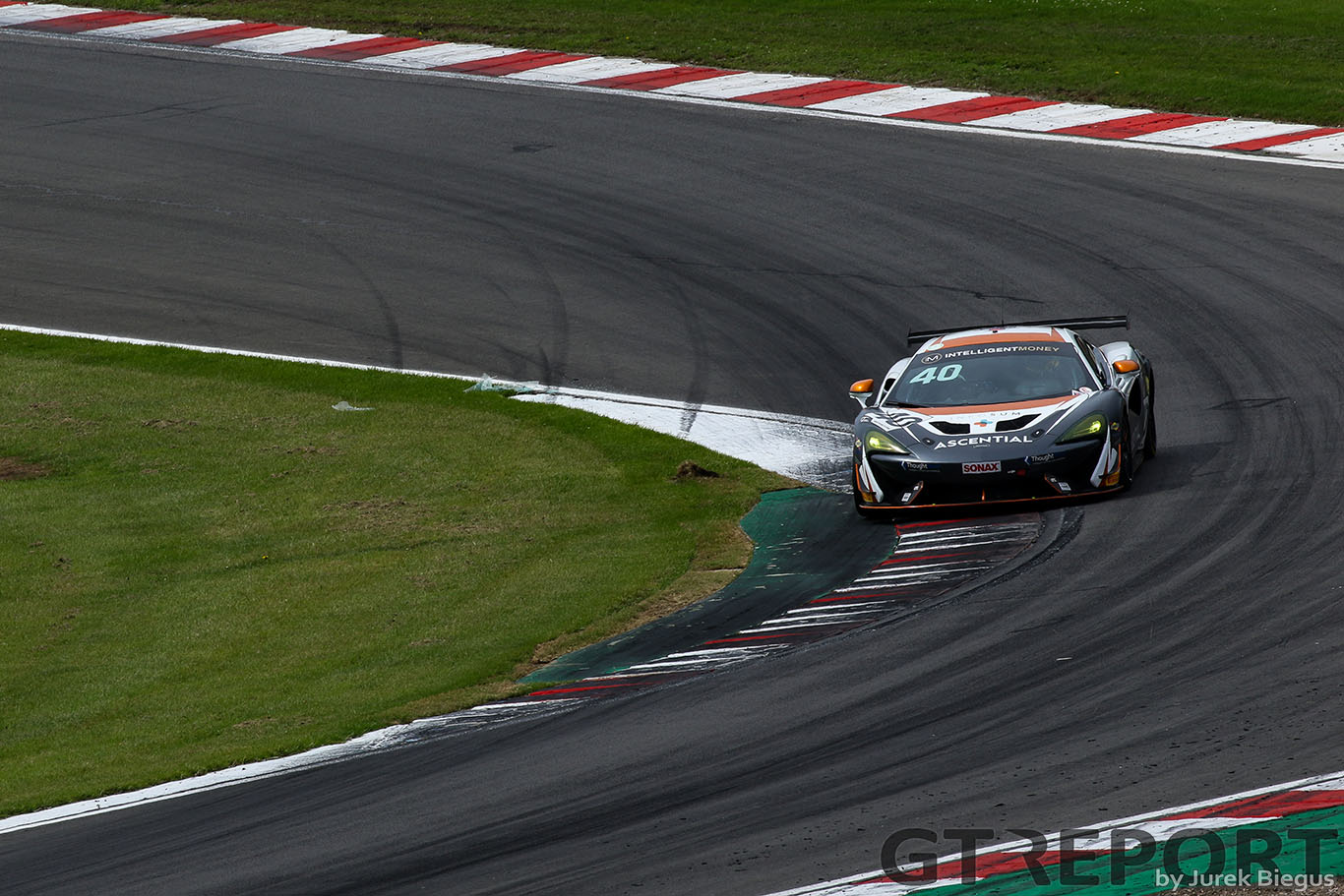