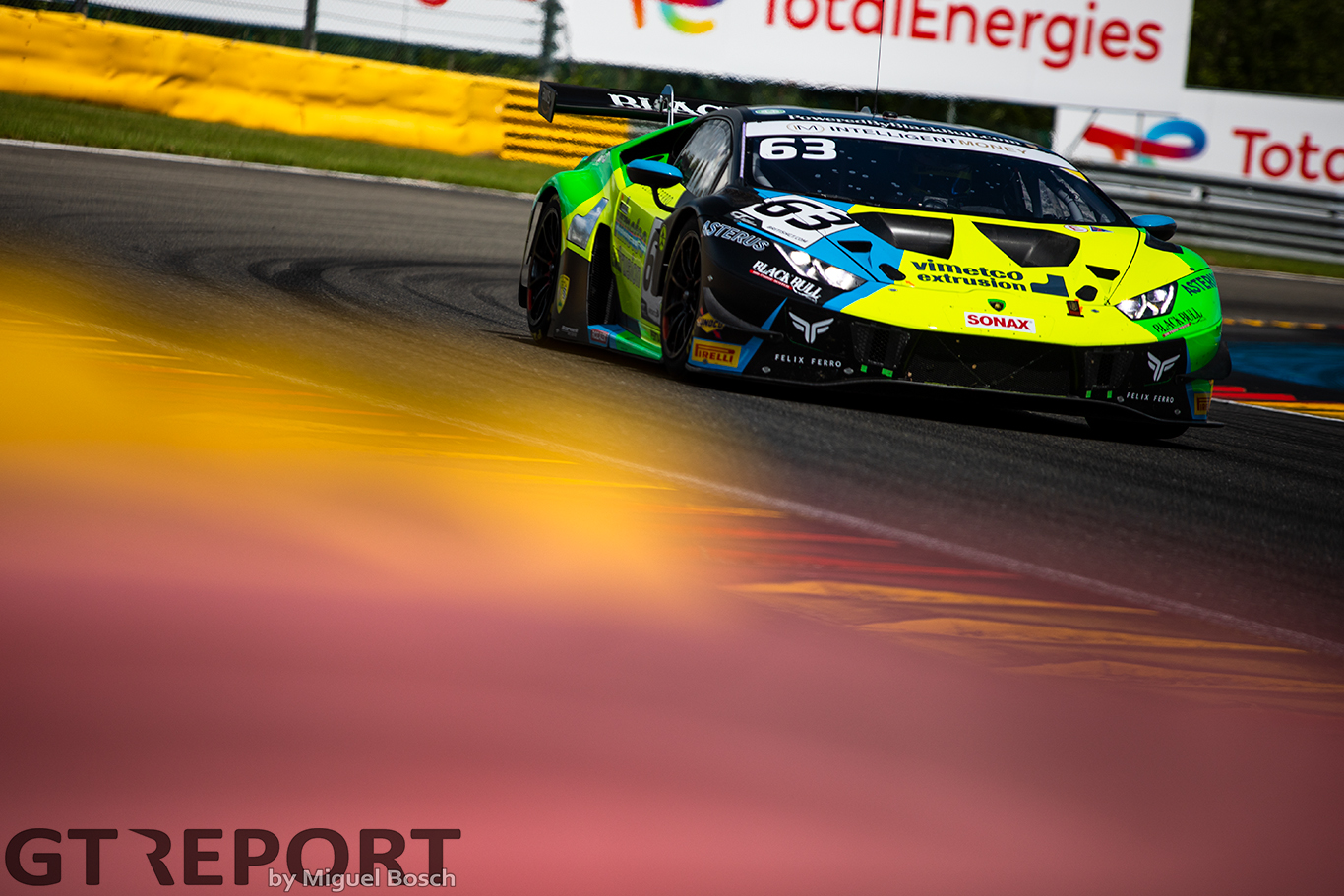 Barwell Motorsport’s Dennis Lind and Leo Machitski have taken the Intelligent Money British GT Championship points lead after a comfortable win at the series’ summer holiday trip to Spa, in yet another race hampered by first lap incidents.

In GT4, Balfe Motorsport won the class after late drama with just five minutes to go, as a drive-through penalty for track limits violations relegated the then leading Newbridge Motorsport Aston Martin down to second after Darren Turner’s great climb up to the lead was undone.

At the start, there was a confusing incident just as the cars went across the start line. As the lights went out, Richard Neary in the Team Abba Racing Mercedes-AMG GT3 reacted the quickest and put the hammer down straight away.

As Neary powered his way through the middle of the field, Ian Loggie moved left in his RAM Racing Mercedes-AMG GT3 and came together with Neary, who went onto two wheels as he connected with the rear left of the pink machine.

Here’s the start – Neary goes for a gap between Loggie and Balon that rapidly closes.

That caused the Abba car to spin across the track, and then was clipped by Michael Benyahia’s Team Rocket RJN McLaren 570S which spun the Mercedes into the path of Mia Flewitt’s McLaren 720S GT3, who couldn’t avoid making head-on contact.

Loggie managed to limp the car back to the pits, and got back out eight laps down on the field, but Neary, Flewitt and Benyahia were all immediately out of the race with terminal damage.

A safety car was immediately called for to recover the cars and sweep both debris and one of the wheels, and associated suspension parts, from the Neary Mercedes which has been in the wars this weekend.

As the race went to green again, it was clear to see that in the chaos of the start some other cars started to show signs that they hadn’t escaped completely damage-free. That’s because Leo Machitski absolutely blitzed the field in his Barwell Lamborghini Huracán. 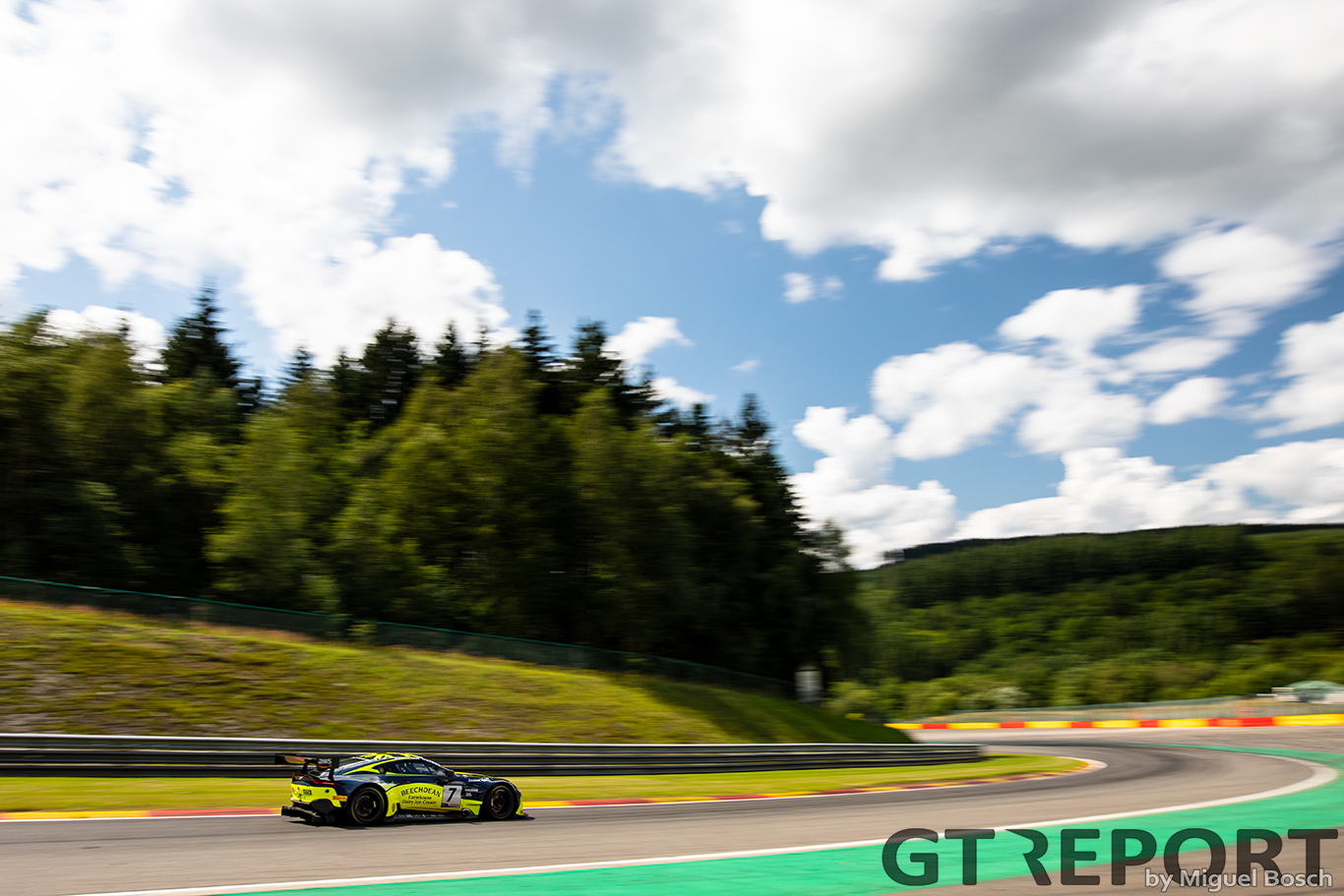 Andrew Howard put in a good effort to put the Russian under pressure, but with his Beechdean AMR Aston Martin displaying rear diffuser damage, he wasn’t in any position to really challenge. Indeed, he was having to keep his wits about him to keep Stewart Proctor’s rapid Balfe Motorsport McLaren 720S GT3 behind.

As Machitski started to pull away, the focus of the action was on the battle forming for third, with Proctor having to defend from both Michael Igoe’s WPI Motorsport Lamborghini and Adam Balon, in the second of the Barwell Huracáns.

Igoe was all over the rear of the McLaren for lap after lap, but didn’t quite have the same top speed going up the Kemmel Straight. Before he could make a move stick on Proctor, he briefly lost fourth to Balon.

Heading down into Piff-Paff, Igoe slightly outbraked himself, which gave Balon the opportunity he needed to get up into fourth. Igoe, though, wasn’t about to give up the place easily and was quickly onto the back of the green machine heading down into Eau Rouge, with Balon electing to let Igoe through rather than run side-by-side. 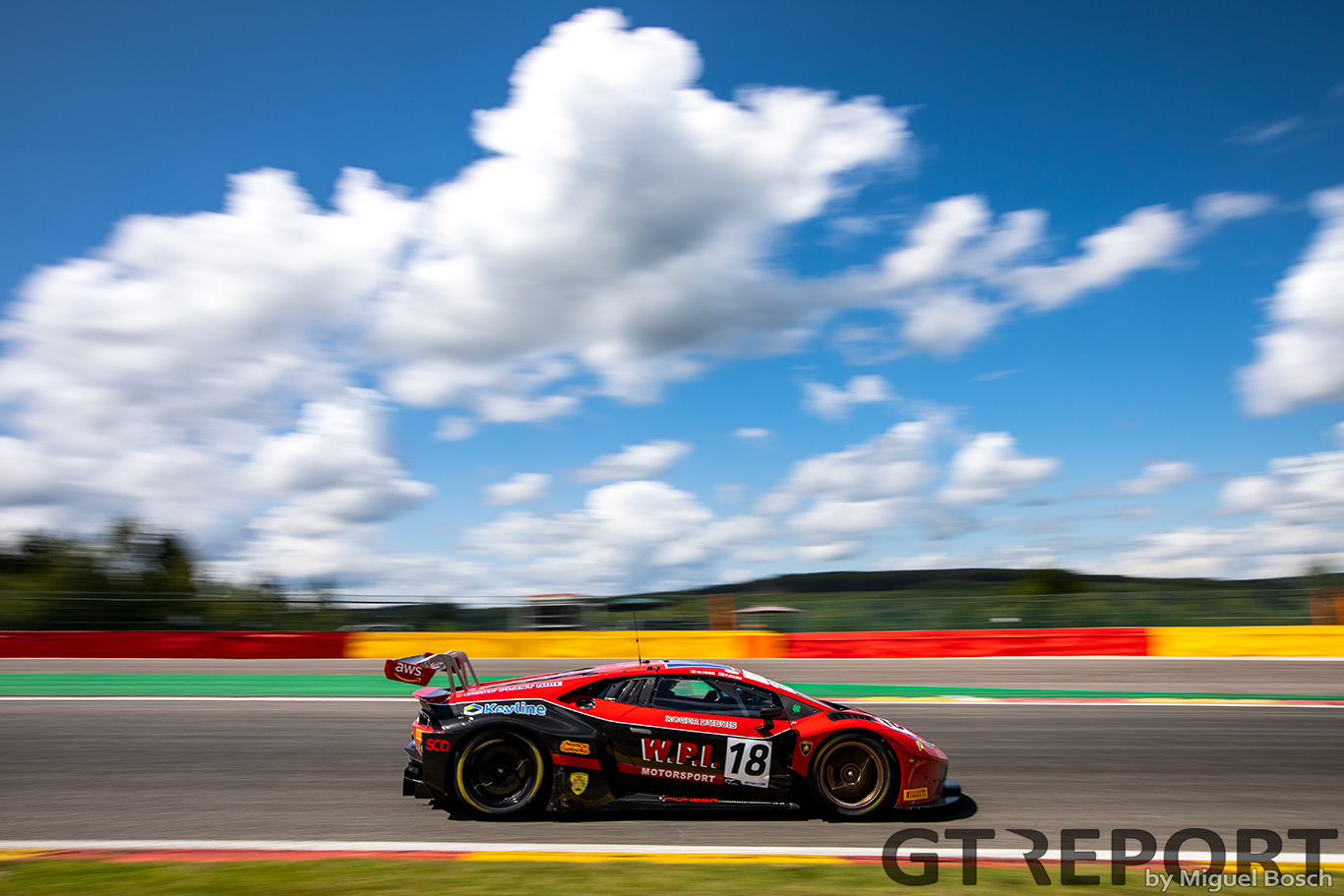 The three-way fight then became a two-way one, as Balon had a spin at Campus. The car started to spin to the right and then snapped back to the left, sending Balon into the gravel trap which he somehow managed to dig himself back out of.

It was only after Phil Keen got into the car that the decisive move was done. Heading through Eau Rouge and up to Raidillon, Lewis Proctor – who took over from father Stewart – was blocked by Katie Milner’s Team Rocket RJN McLaren, which gave Keen the run he needed to comprehensively pass Proctor into Les Combes.

That overtake actually gave WPI second, as an uncharacteristic mistake for Beechdean cost the team a place on the podium. Howard came in a minute before the pit window opened, with the second trip to the pits costing them desrly. Combined with a drive-through for speeding in the pits, and the Aston was destined for fourth as the Balfe McLaren also sneaked through to claim a hard-earned podium.

For a time, it didn’t appear that Beechdean would even take fourth as Sandy Mitchell, taking over from Balon, was right on the tail of Aston. Ross Gunn, now behind the wheel, exploited the slightly higher top speed of the Vantage to keep the reigning champion at bay, despite the Barwell Lamborghini being pretty much glued underneath the rear wing. 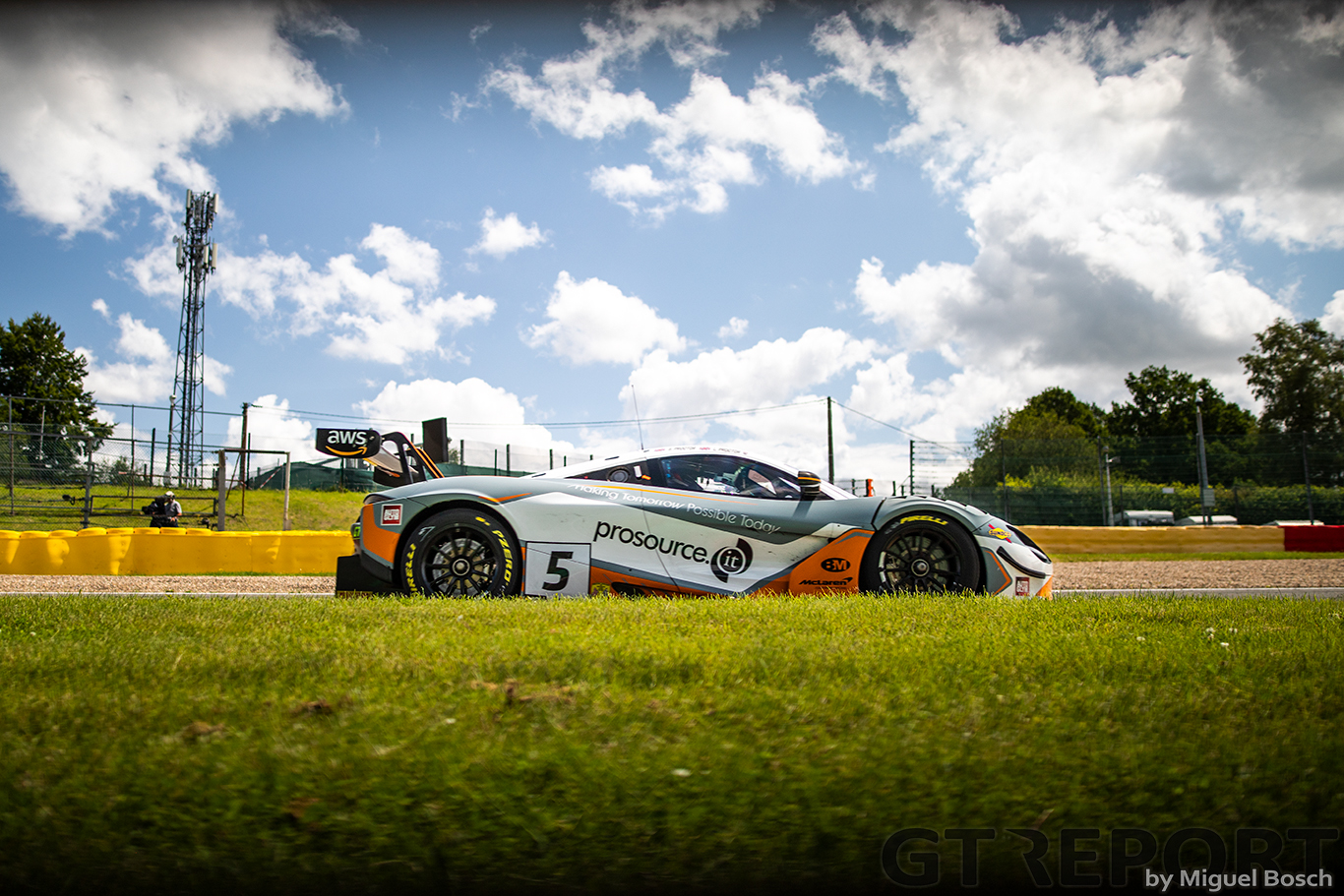 In the end, the battle proved to not be as tight as it could have been, as Mitchell was given a 30second penalty with less than two laps remaining in lieu of a drive-through for multiple track limits penalties.

Loggie and Yelmer Buurman also secured points for sixth in GT3, despite being down in 13th and eight laps down, as they completed the required 75% race distance to score points.

All of that action has had a big impact on the championship battle, as Machitski and Lind have moved into a provisional lead of the championship, 1.5 points clear of Andrew Howard – now by himself in second because of Jonny Adam having to miss this race.

The battle for the GT4 class changed hands throughout the 120 minute blast through the Ardennes, and even when it seemed to be settled, a late twist handed the victory to the consistently quick Balfe Motorsport McLaren duo of Jack Brown and Ash Marshall – their first silverware of the season.

At the start, Will Burns maintained a handy lead in the #57 Century Motorsport BMW M4 GT4 but had Marshall trying to nibble at his heels as the slippery McLaren 570S proved to be packing a bigger punch on the Kemmel Straight than the bigger BMW. 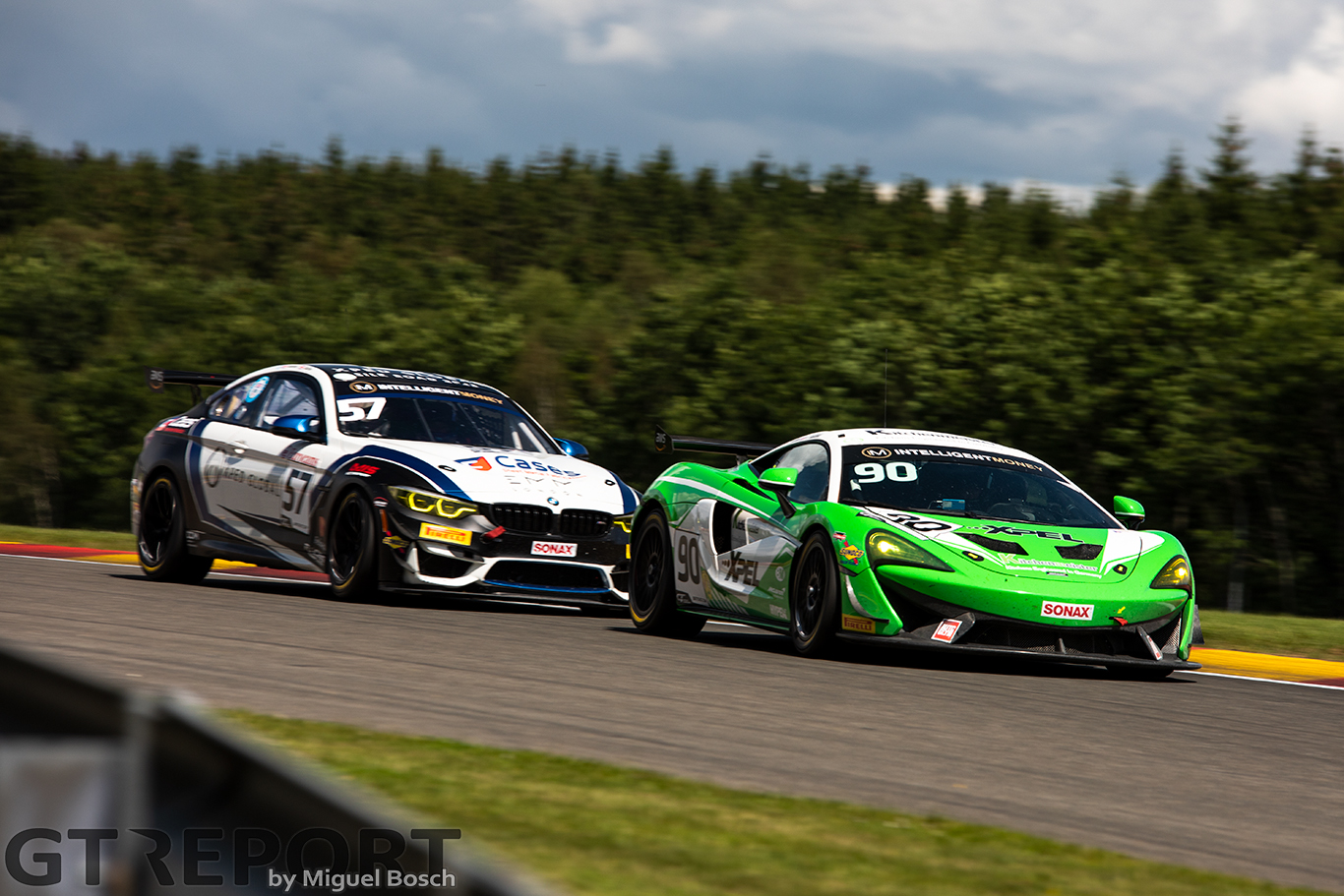 It was only a brilliant move by Marshall up the inside of Burns at Eau Rouge that got the Balfe car ahead. Burns tried to fight back at Les Combes, but Marshall put up stern resistance and maintained the place.

Handing the car over to Brown, a success penalty from Donington gave him a bit of breathing space from Burns’ replacement Gus Burton but was instead faced with the task of trying to fight off Aston Martin superstar Darren Turner.

That Turner was so high up in the Newbridge Aston was a testament to Matt Topham’s opening stint. Topham was stuck in the startline incident and had to reverse back to give himself the space to swing round the Abba and Rocket GT3s, and used the safety car to get back onto the field.

He picked his way past some of the lower reaches, and then handed over to Turner, who jumped up to third thanks to the extra time his Silver Cup rivals needed to spend in the pits.

First prevailing in a tight battle with Milner, he was soon onto the back of Brown’s McLaren, but didn’t find it easy to make his way through. After a thrilling fight between the pair, Turner finally made the decisive move round the outside of Double Gauche and into Piff-Paff, Brown leaving just enough space for the Aston to remain on the track. 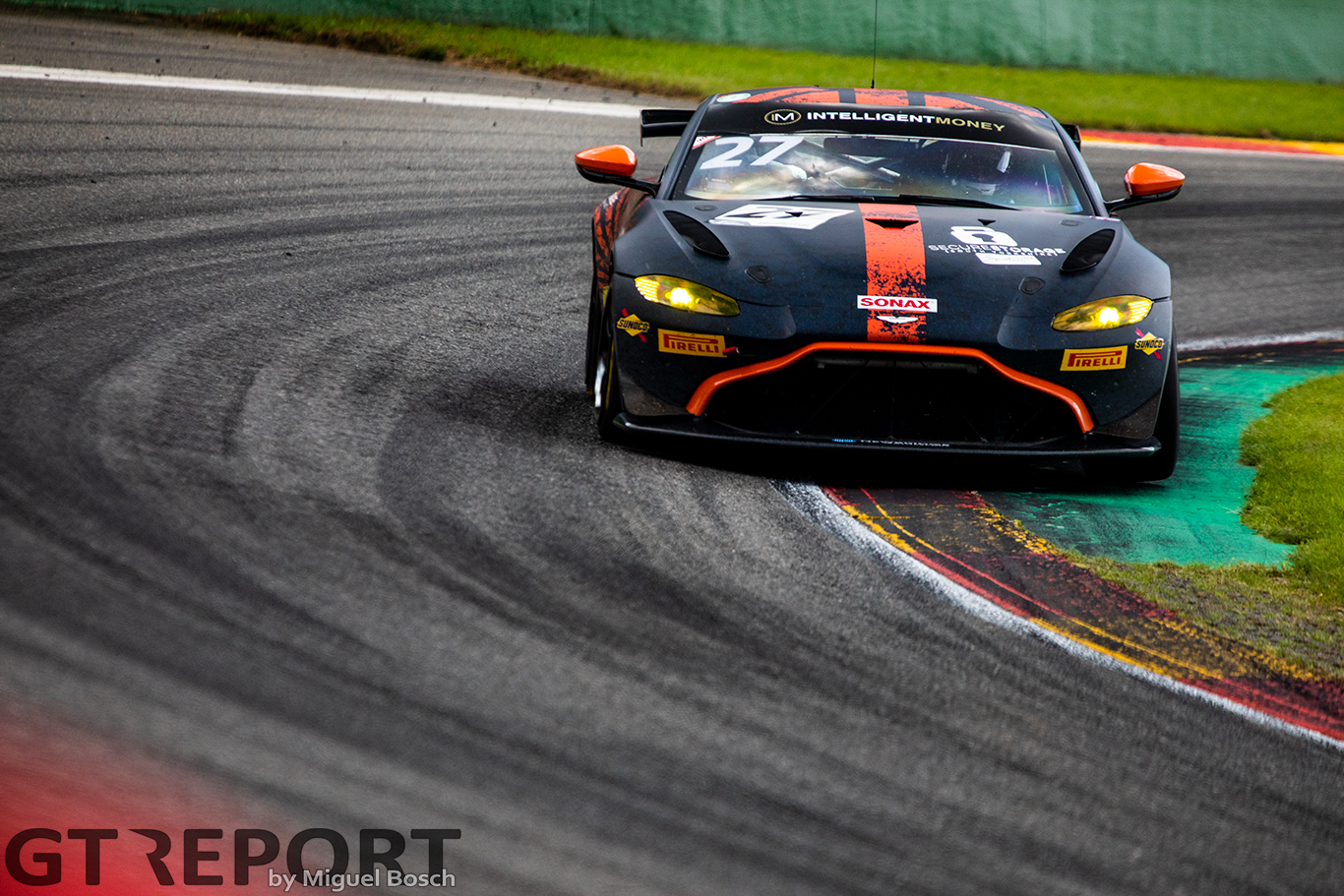 It appeared as though a comfortable win was within sight for Newbridge, but Turner was handed a drive-through penalty with five minutes remaining because of numerous track-limit violations. Turner stayed out, the team arguing their case with the stewards, and the drive-through was converted to a 30second time penalty after the race, which pushed the crew provisionally down to second.

That handed Marshall and Brown their maiden silverware and gave Balfe Motorsport a double success when combined with the GT3 podium for the Proctors.

Burns and Burton finished third in the end, comfortably banking more points in their own championship fight.

Fourth went to Matt Cowley and Will Moore, but it was by no means easy for the Ford Mustang racers. For the final 20 minutes, Cowley was involved in a great fight with Sennan Fielding in the Steller Motorsport Audi, and Andrew Gordon-Colebrooke in the second of the Century BMWs.

The three were stuck nose-to-tail with Fielding fending off attacks from the other two for a good while. Things only changed with less than ten minutes to go.

Fielding found himself in a drag race Gordon-Colebrooke, with Cowley inches behind. As they got into Les Combes, Fielding was pressured to the outside and lost positions to both of them – not helped by the fact that Lind was coming up to lap the trio in the leading Barwell car. 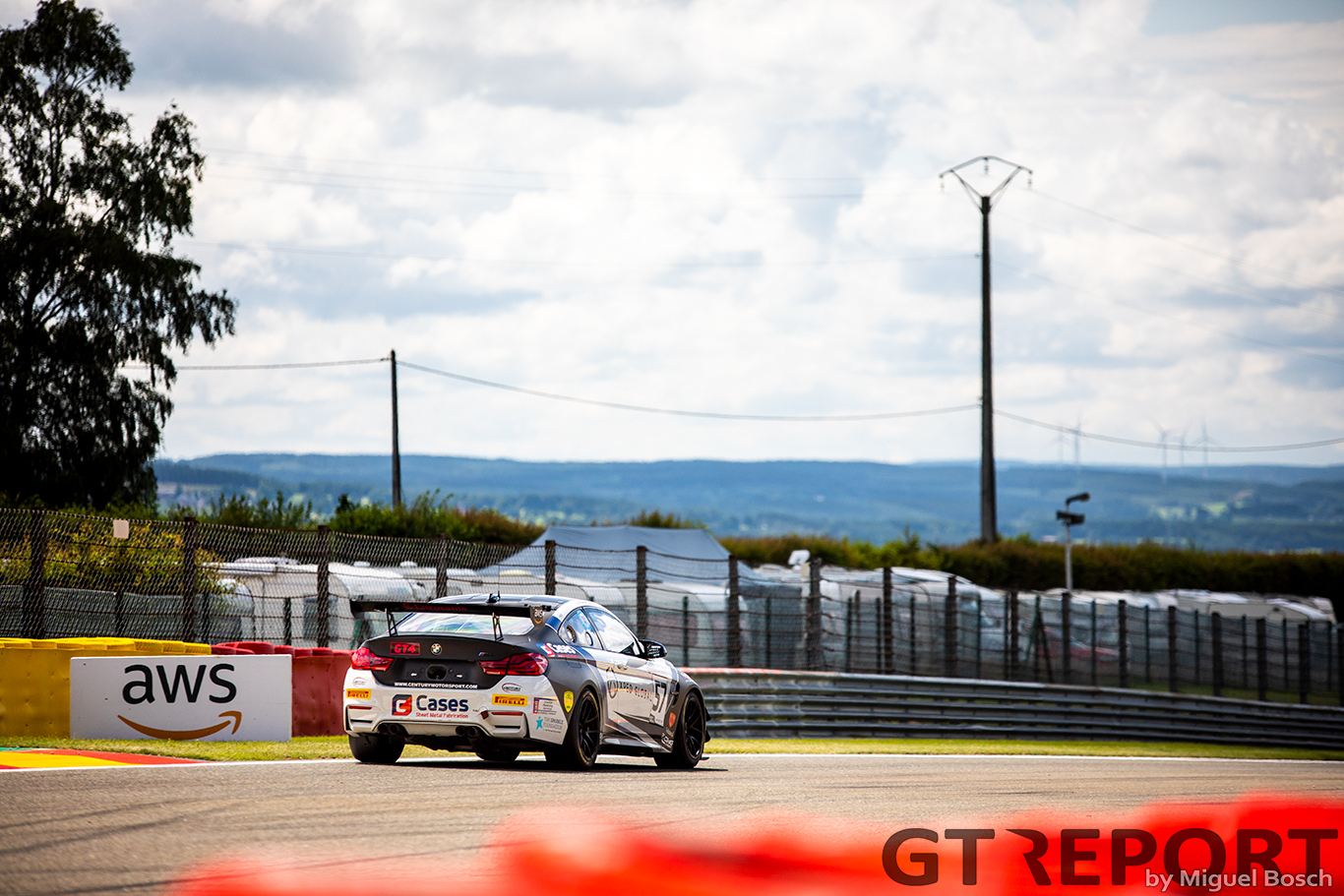 Gordon-Colebrooke’s grasp on fourth didn’t last long, as Cowley applied the pressure in the Academy Motorsport Mustang and made his way into fourth, Gordon-Colebrooke taking fifth ahead of Fielding.

There was late drama for Milner, who had to pull off the track at the Bus Stop with a puncture. She was close enough to the end of the race to still be classified seventh overall alongside Harry Hayek.

Eighth, and last of the runners, was the Toyota Gazoo Racing UK Supra. John Ferguson made a good start – which was later penalised as a jump start – but as the field scattered because of the crash, the Supra picked up front-left damper issues which necessitated a lengthy pitstop. The car got back out, with Scott McKenna setting the fastest lap in class on his way to a Pro-Am podium.

Joining Michael Benyahia in retirement was the Assetto Motorsport Ginetta G56, Mark Sansom also picking up damage at the start.

The next round of the British GT Championship is the first of the 60-minute double-header race weekends, with the field heading to Snetterton on August 7/8. 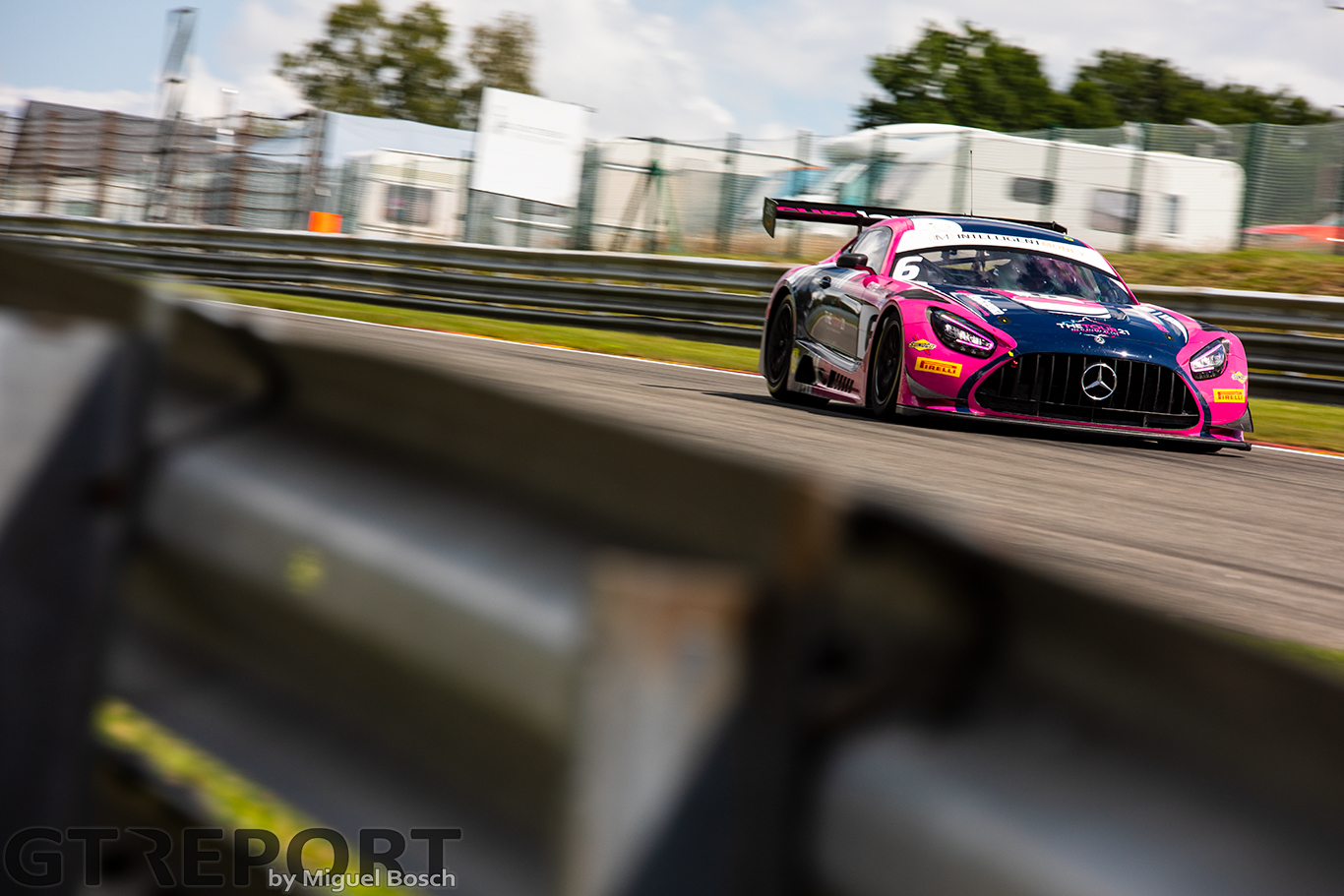 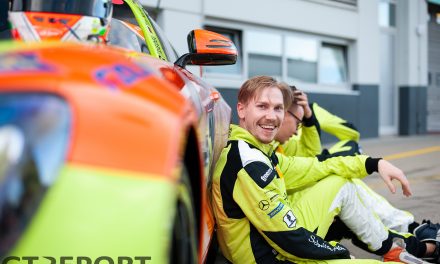 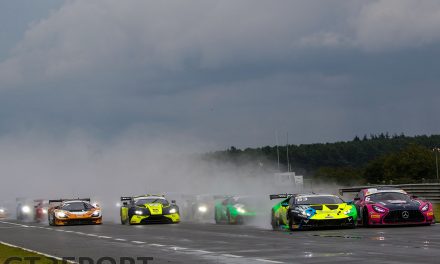 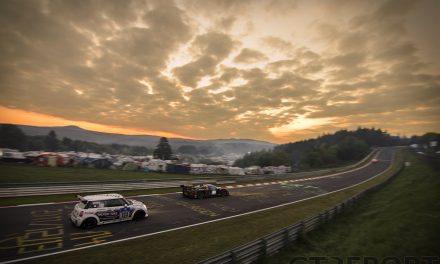 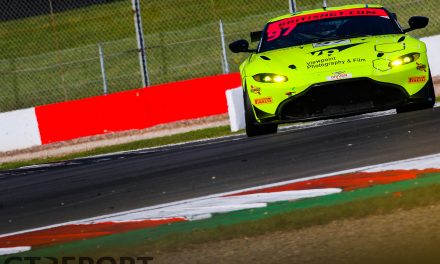