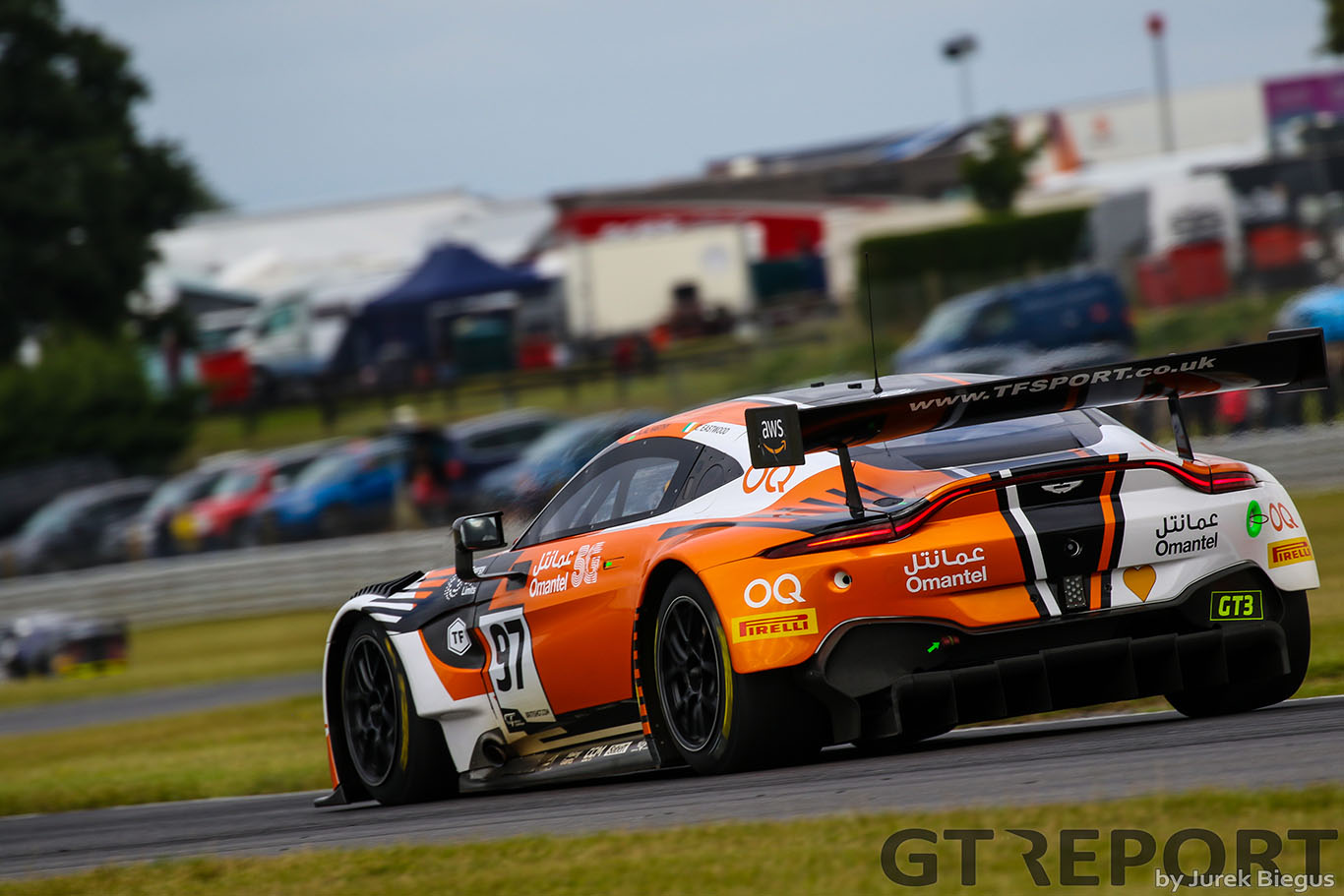 Oman Racing with TF Sport swept to a comfortable victory on the team’s return to the Intelligent Money British GT Championship in the opening 60-minute race at Snetterton.

In GT4, a solid opening stint from James Kell translated into a handy lead for Jordan Collard after the mandatory pit stop as Team Rocket RJN bounced back from Spa nightmares to take a well-earned win in the secondary class – a first in British GT for Kell.

Starting the Aston Martin Vantage GT3, Ahmad Al Harthy had a perfect getaway from pole in the Oman Racing car to hold a comfortable lead over the Paddock Motorsport Bentley Continental which started on the outside of the front-row, but didn’t have the same cornering speed through the twisty infield section.

From that clean start, Al Harthy continued to pull away, and within the first 20 minutes, he gained himself an advantage of more than four seconds over the pack behind.

He was helped due to the fact that Fletcher had to focus on defending from Michael Igoe, who had made a rocket start in the WPI Motorsport Lamborghini Huracán to move from fifth to third. 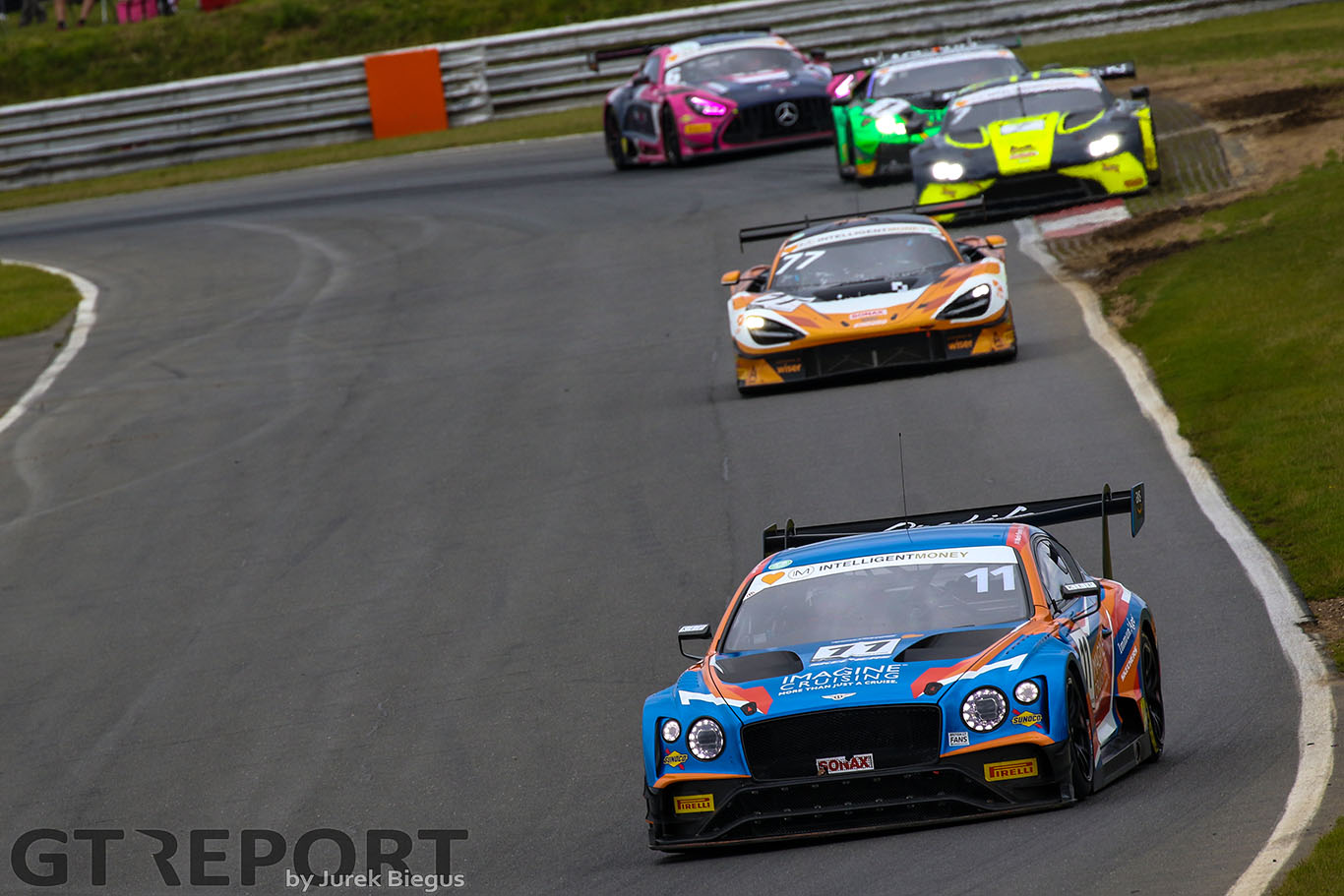 Try as he might, Igoe couldn’t find a way past Fletcher, who benefitted from the highest top speed through the speed trap on the long Bentley Straight to keep the Lamborghini at bay.

The battle was eventually decided just as the pit window opened with 38 minutes to go. Heading into the tight left of Agostini, Fletcher was forced to brake early to avoid tangling with a GT4 battle, but that caught out Igoe, who braked a touch too late and rear-ended the Bentley.

Thankfully it didn’t do much damage to either car, but a stop/go penalty for WPI took them out of contention – eventually finishing seventh in class.

It wasn’t the same for Fletcher though, who handed over to Martin Plowman at the earliest possible opportunity. Plowman then put in a perfect closing stint to hold on to second place at the flag, unable to close the gap to Charlie Eastwood’s Aston – a first British GT win for him – but did put in a great late defensive action to fend off late pressure from Dennis Lind.

Plowman’s well-earned podium for Paddock Motorsport was assisted by some action-packed battling for the places ranging from third to sixth.

For a time, third was held by Marcus Clutton in the Enduro Motorsport McLaren – after an opening stint from Morgan Tillbrook which displayed just how wide a 720S GT3 could be – but the team were given a drive-through for a pit infringement. For reasons unknown, Clutton didn’t take the penalty and was ultimately black flagged with six minutes remaining. 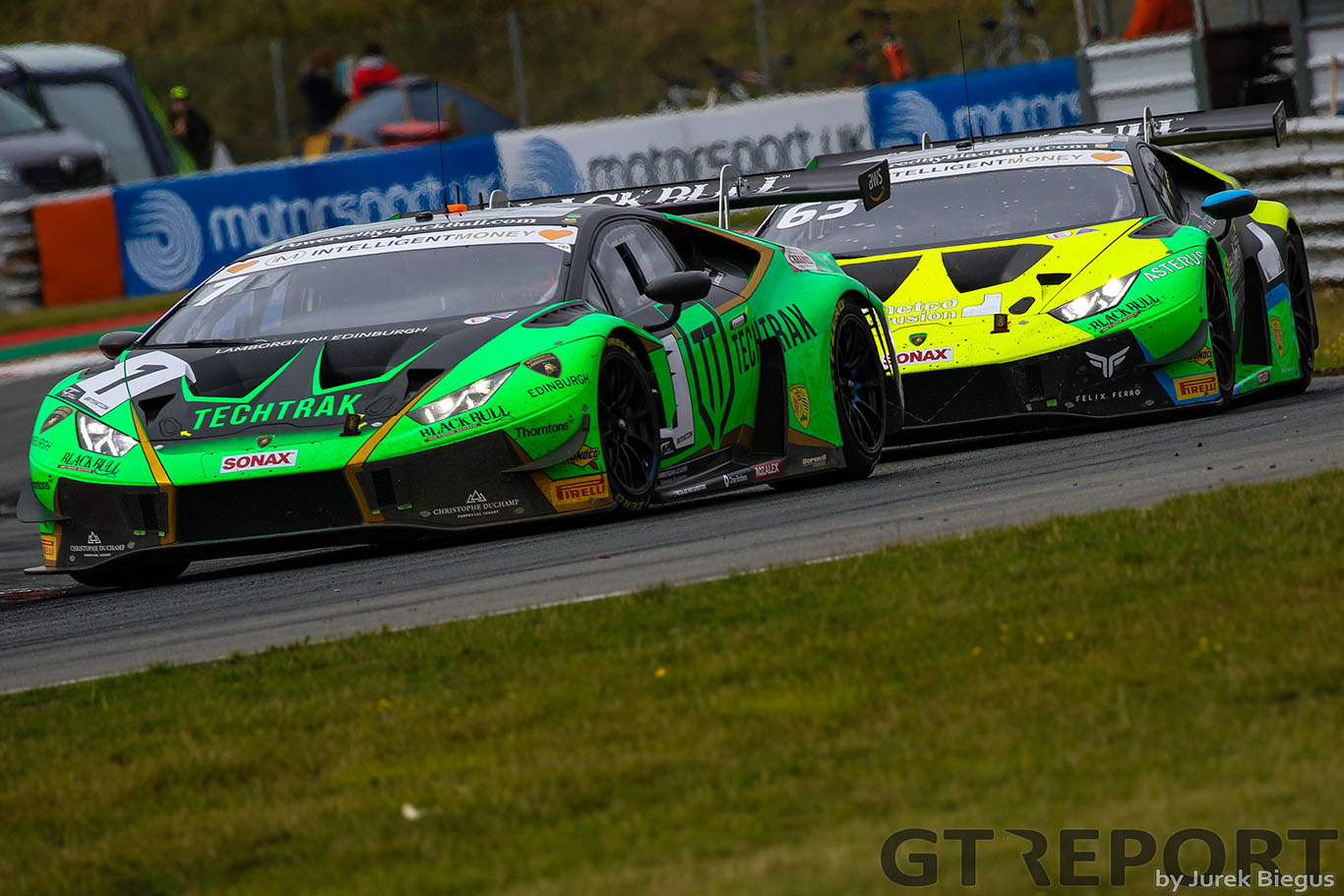 That promoted Beechdean AMR’s Jonny Adam into third, and he was showcasing every ounce of his experience to try and fend off a train of cars that featured both the Barwell Huracáns – Sandy Mitchell leading Dennis Lind.

The status quo didn’t last for long though, Lind – who was all over the back of Mitchell – finally got past the reigning champion with a great move up the inside at the Wilson hairpin and then got onto the back of Adam.

It was only on the last lap that the final space on the podium was confirmed. Heading onto the Bentley Straight, Adam was blocked by Darren Turner and Jamie Stanley running side-by-side for eighth in GT4 and Lind managed to swing right and power his way past the Vantage.

Running through Coram and Murrays, Lind closed in on Plowman but ran out of time to snatch second. Adam finished fourth, fortunate not to be relegated down to fifth by Mitchell on the run to the line. 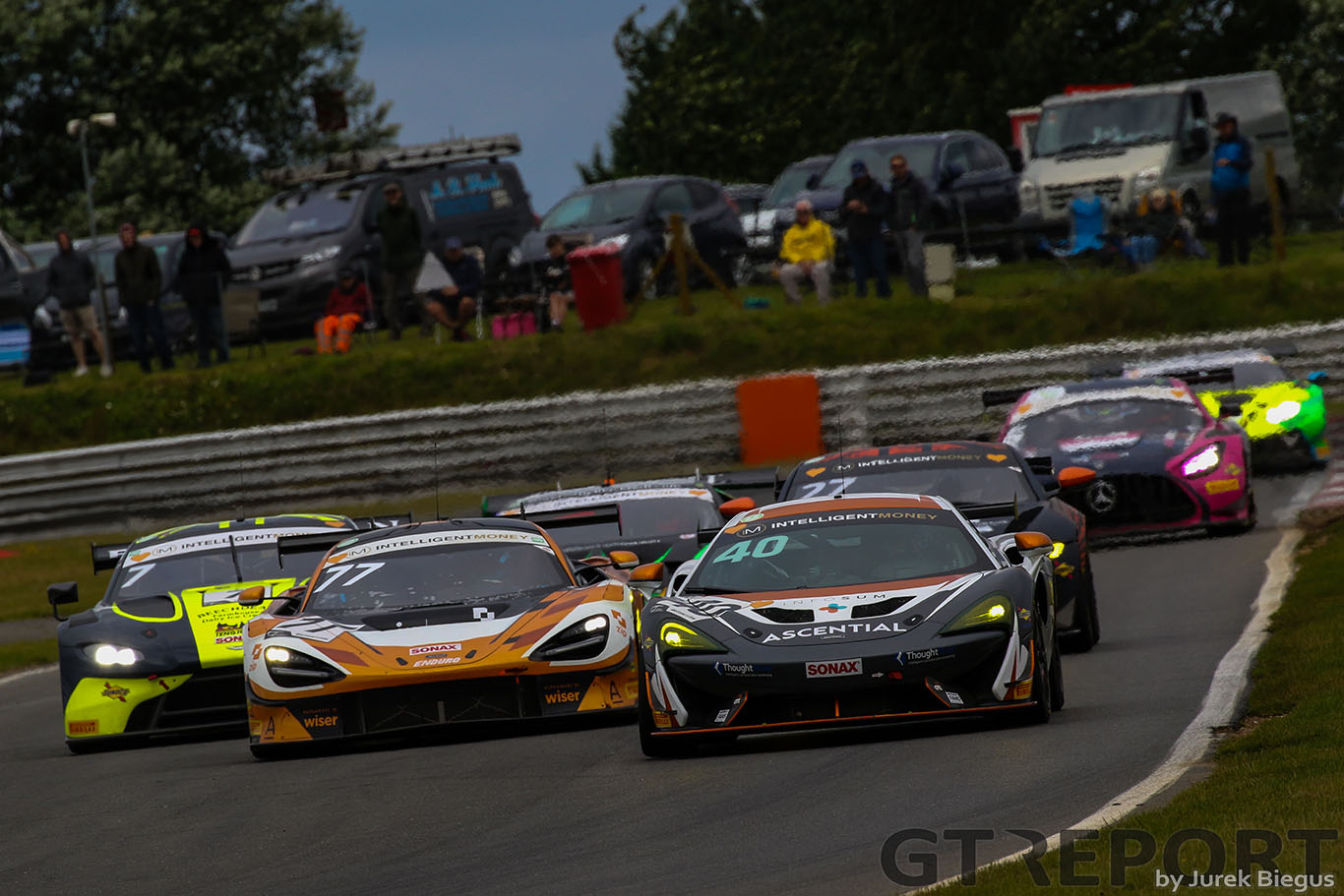 Igoe and Phil Keen finished seventh after their penalty, promoted a place late on after Yelmer Buurman was forced to pit from fifth with 20 minutes remaining because of a right-rear puncture.

G-Cat Racing rounded out the GT3 field, which was lacking a car after Team Parker Racing failed to start with the team dealing with a sensor issue in their Porsche 911 GT3 R.

A first British GT for James Kell was a perfect antidote to a Spa testing crash that denied he and Jordan Collard the chance of racing in Belgium last time out.

A good start from Kell put the Team Rocket RJN crew in third, just behind polesitter – and team-mate Alain Valente – and the championship leading Century Motorsport BMW M4 GT4 of Will Burns.

Their move up to the lead was a good example of perfectly utilising the opportunities fate threw their way. First, Valente had to pit early with a left-front puncture in his McLaren 570S. Then, in the mandatory stop, a success penalty for Burns and co-driver Gus Burton allowed Collard to leapfrog the M4 into the lead.

From there, the pair didn’t put a foot wrong and grew their lead to more than 20 seconds at the flag in their brand-new 570S – their former car a write-off at the Spa shunt. 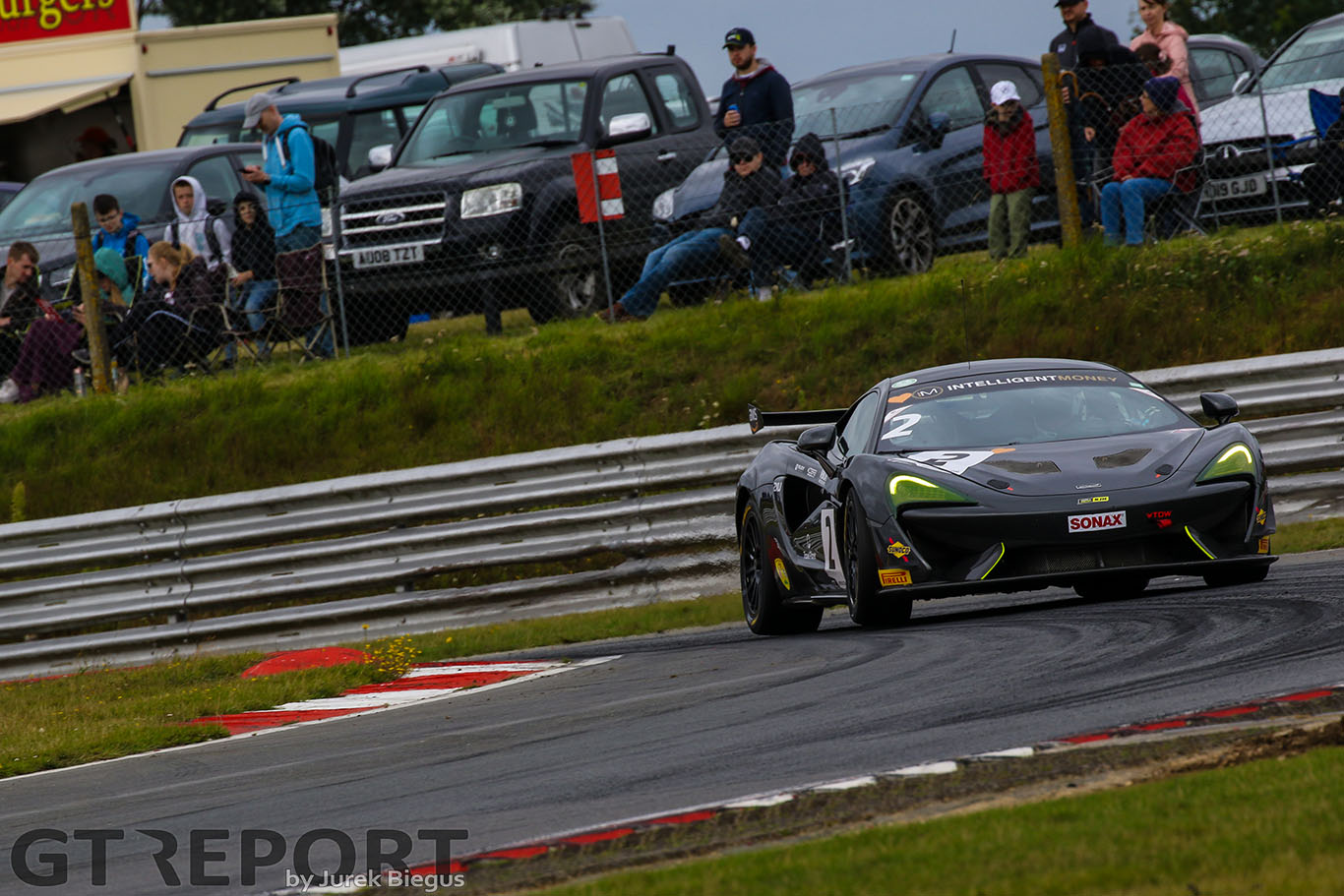 Second only just went the way of Burns and Burton. The BMW ran a solid second stint, but came under late pressure from Scott McKenna who was absolutely ripping up the field in the Toyota Gazoo Racing UK Supra.

Jumping ahead because of the 20second time penalty in the pits for Silver Cup crews, McKenna first dispatched Harry Hayek with an audacious move round the outside of the third of the Team Rocket RJN cars at Coram and then placed himself under Burton’s rear-wing.

The former Porsche Carrera Cup racer tried the same move again on Burton coming to the line for the final time, but the BMW had enough power to fend off the late charge from the Supra – McKenna and co-driver John Ferguson settling instead for an overall podium.

Hayek finished fourth, with Charlie Robertson close behind in the Assetto Motorsport Ginetta G56. A spin at Coram dropped Matt Cowley down the order slightly, but still finished sixth in the Academy Motorsport Ford Mustang. 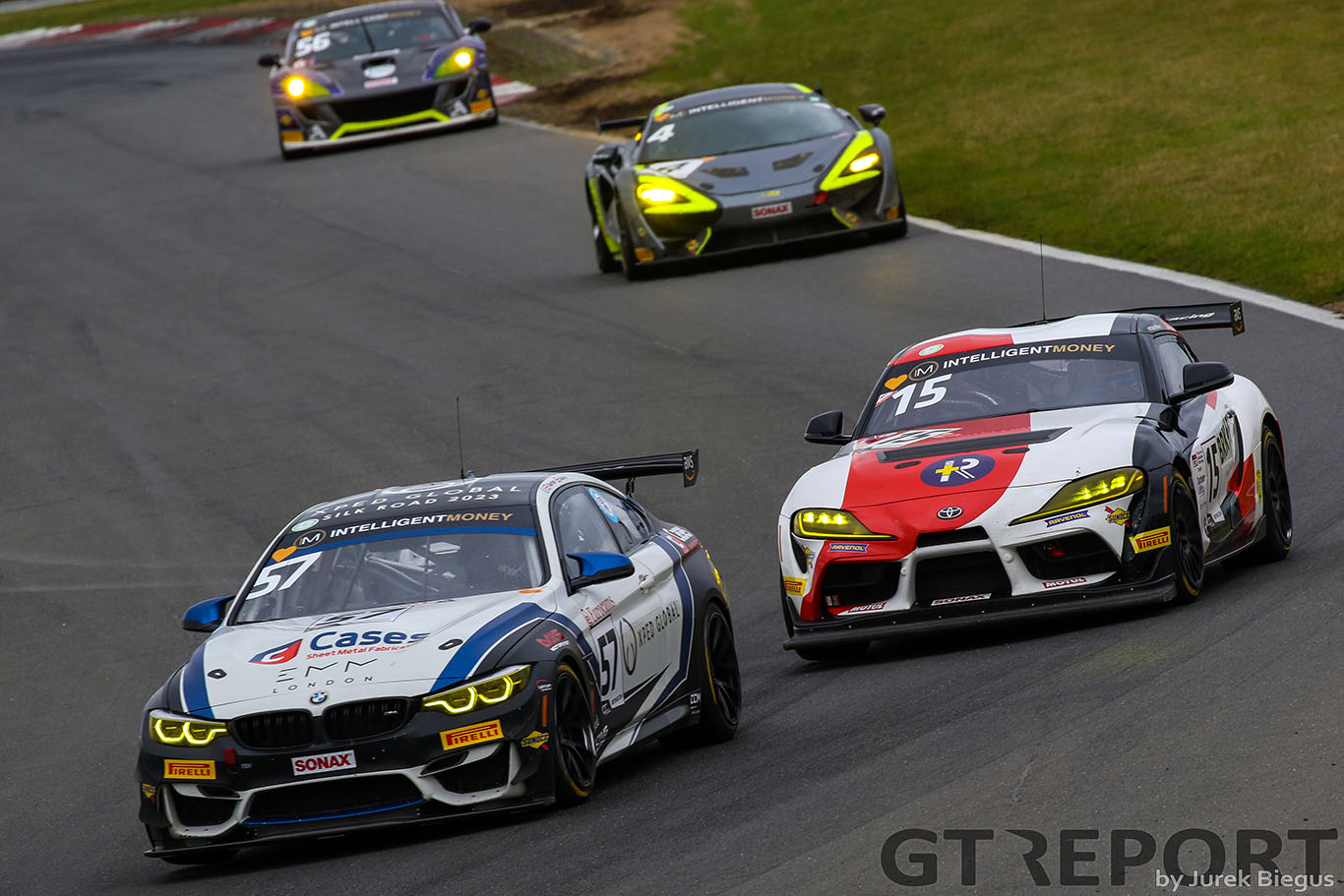 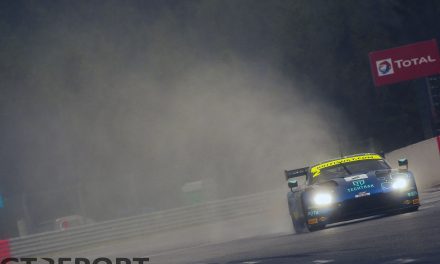 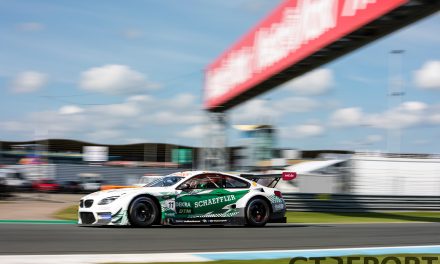