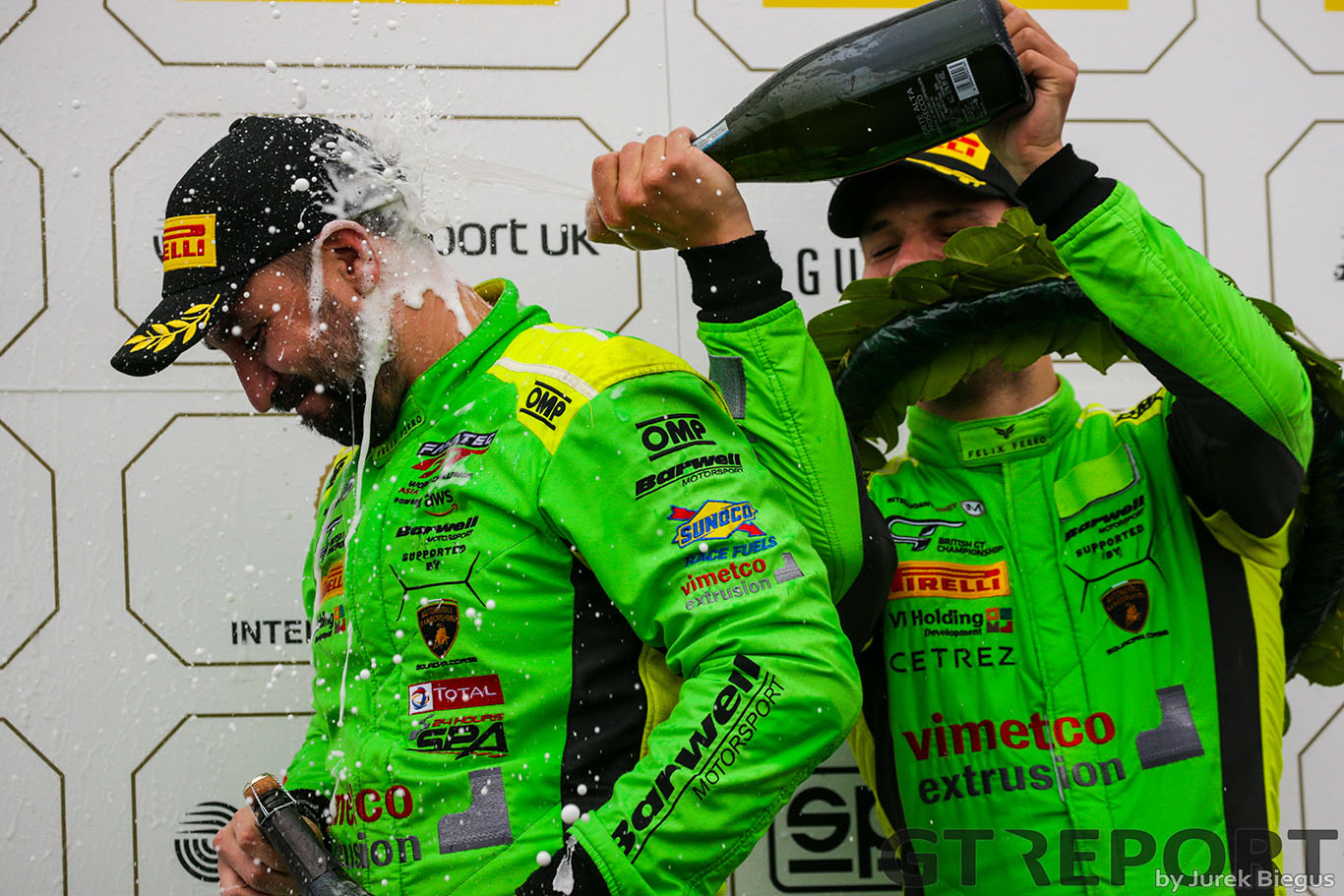 Leo Machitski and Dennis Lind tackled tricky conditions to seal the Intelligent Money British GT Championship title at the #DoningtonDecider, a fourth place on the road enough for the duo to secure Barwell Motorsport’s second title in as many years.

On the road, it was Enduro Motorsport which took its first victory in the championship as Marcus Clutton built on Morgan Tillbrook’s solid opening stint to take a stunning win.

A see-sawing GT4 category went the way of Academy Motorsport with Matt Cowley and Will Moore taking the win in the Ford Mustang.

With the rain that deluged Donington Park eventually breaking just before the start of the final two-hour race of the year, the start of the race entailed the field picking its way round the undulating circuit figuring out exactly where the best of the grip was. 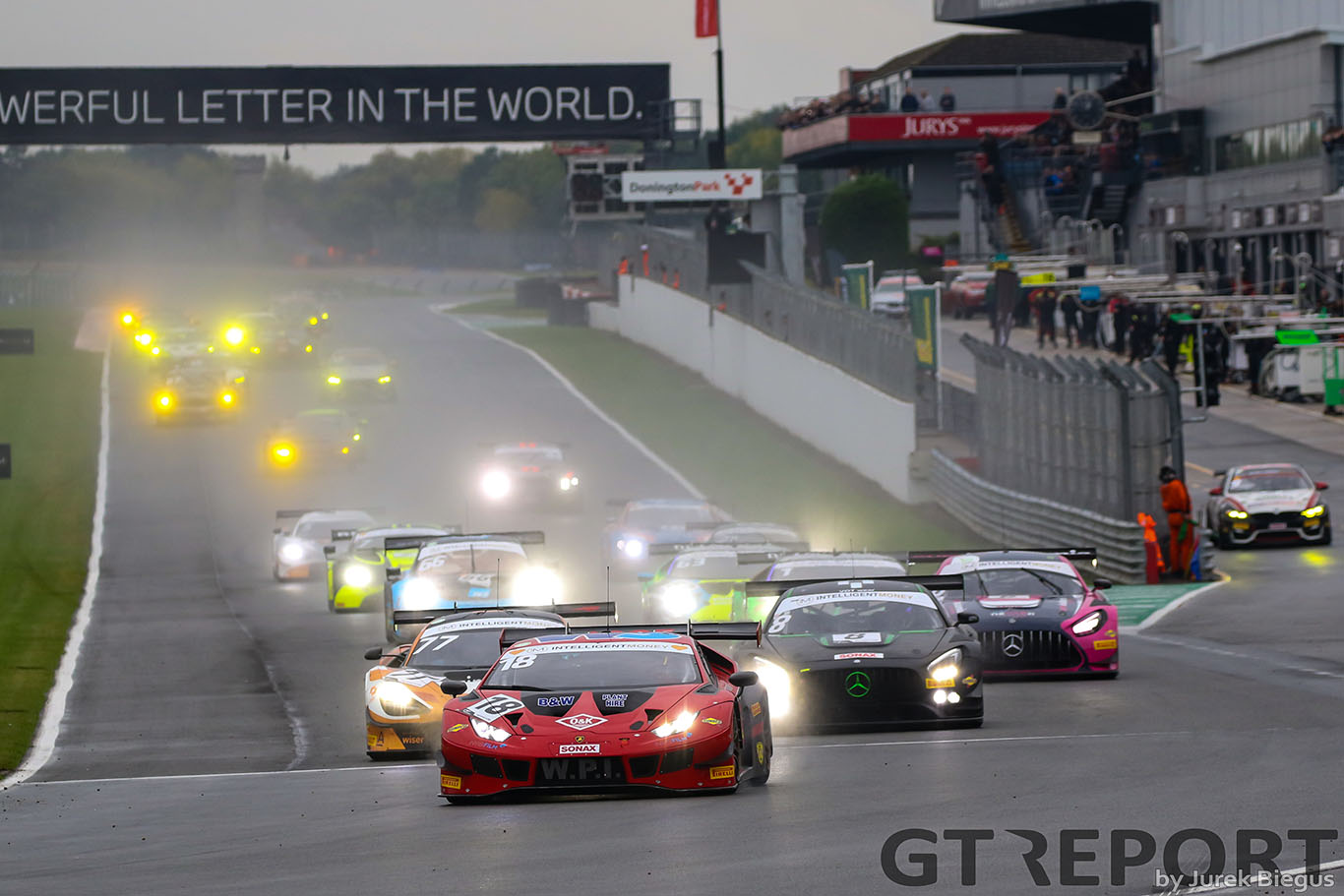 It was those slippery conditions that gave the championship battle its first dramatic twist. Starting on pole, Michael Igoe got a decent start and was comfortably in the lead going down the Craner Curves. However, the WPI Motorsport driver took slightly too much kerb and span at the Old Hairpin, a lap later he was in the gravel at Coppice and at the back of the field.

Taking full advantage was Richard Neary, who pushed his way past Morgan Tillbrook at Redgate and inherited the lead after Igoe’s exploits.

Neary built up a comfortable lead in the Team ABBA Racing Mercedes-AMG GT3, and even through traffic he was keeping a decent bit of breathing space over the rest of the field. That changed slightly as Ian Loggie in the RAM Racing Mercedes moved into second after a stunning move around the outside of Tillbrook going down the Craner Curves.

Through traffic, Loggie benefitted from a better run and closed to a couple of seconds as the pit window opened, but Neary still held the lead.

The real action came from the Barwell Motorsport team-mates as Machitski had some back-and-forth squabbling with Adam Balon in the second of the Lamborghini Huracán GT3s. The pair came close a few times, but at the halfway mark the pair were safely – enough – running fourth and fifth.

After the stops, the action became explosive as the Pros got in for the last time in 2021. First, Clutton did a stunning move on Loggie’s co-driver Yelmer Buurman as he forced the Dutchman wide at the Melbourne Hairpin before nipping up the inside to take second.

Then, he set about chasing down Sam Neary. Lap after lap, the pair were giving each other some rubbing before Clutton finally picked the lock and got up the inside at Goddards to take the lead, ending what Clutton described to GT REPORT as a ‘bloody good fight with a driver who has lots of potential for the future’. 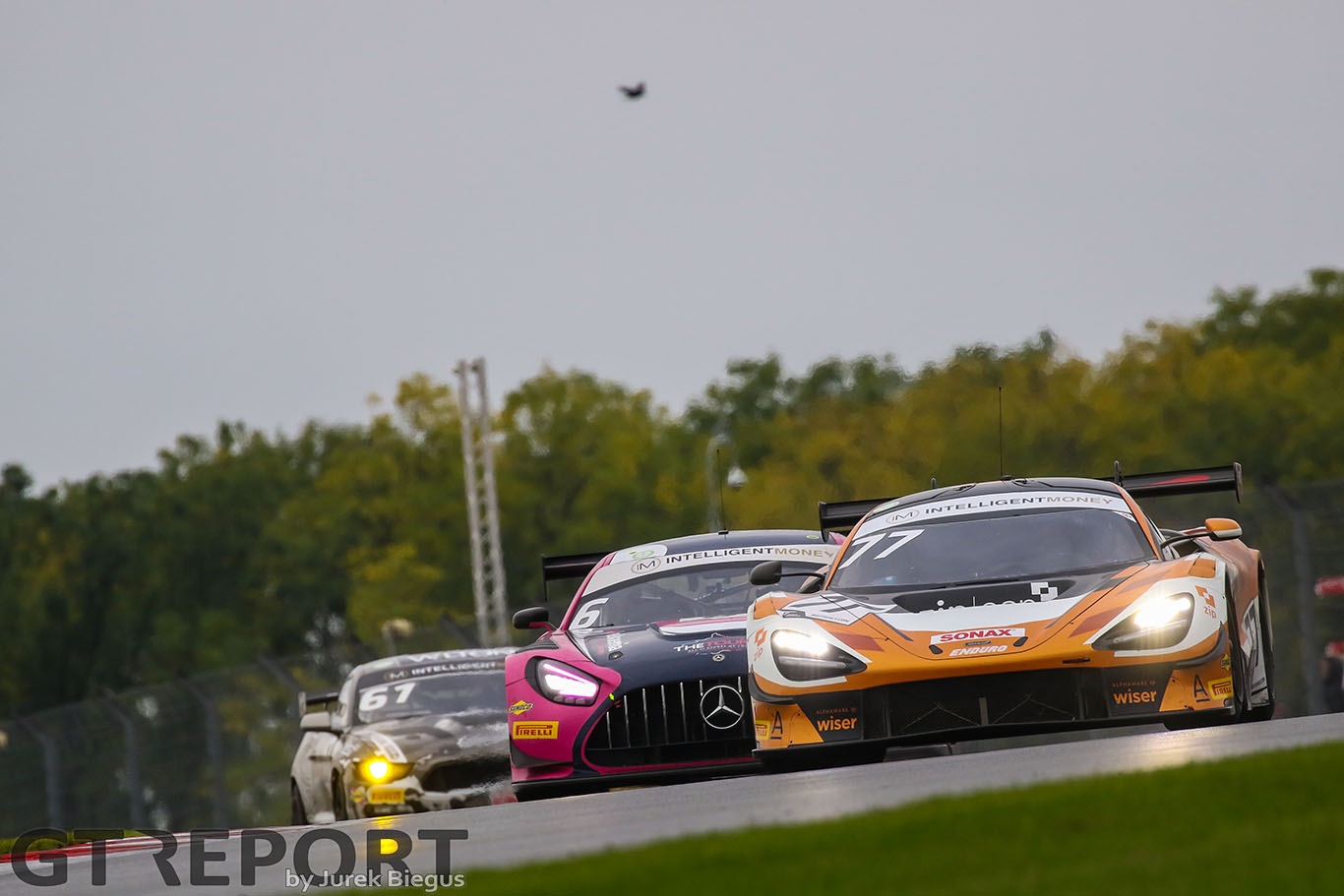 He didn’t have it too easy though, as Sam never quite let him out of his sight, until a rare mistake as he locked up and ran through the edge of the gravel at Redgate and slipped to second.

That allowed Buurman to inherit a place and a boost to his championship chances. With Machitski and Lind in a distant fourth, if Buurman could take the lead he’d win the title with Loggie by one point.

The RAM Racing driver did everything he could to close the gap, but Clutton was unstoppable as he picked the perfect lines through traffic and kept up a relatively brisk average pace.

It looked as though the battle for the win, and the title, would go down to a last lap shootout with Buurman closing the deficit to one second. However, the fight was dashed from all involved as a red flag ended the race 90 seconds early thanks to Jordan Collard’s Team Rocket RJN McLaren grinding to a halt on-track at Coppice.

That meant Clutton – who said he ‘thanked god’ when he saw the red flag and realised he wouldn’t have to fight off Buurman – secured a first victory in the team’s maiden season racing GT3s. 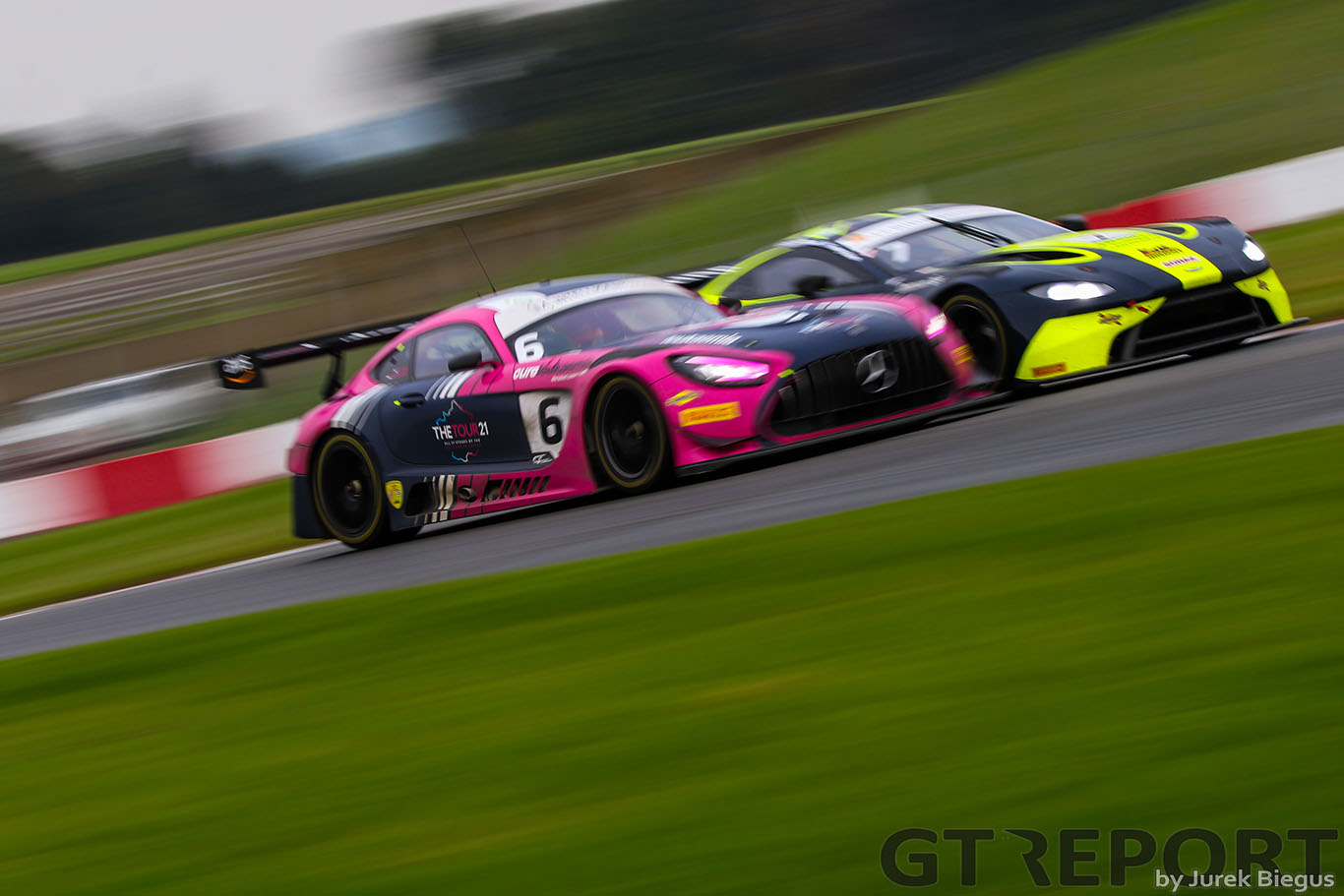 He added: “It was a case of taking some risks, third wasn’t going to be good enough so I put it all on the line to get the victory. The early laps were critical and a lot of risk taking for sure – I was off twice on one lap. But it helped that I had nothing to throw away, Yelmer had a championship to throw away so that helped.

“Morgan did sterling work in his stint, he’s developing every race and he’s like a sponge taking in all the information thrown at him and constantly improving. Going from a Fun Cup to a GT3 is a big step but he’s done a great job all season.”

While Enduro took the win, RAM finishing second meant the title went the way of Barwell’s Machitski and Lind who crossed the line in fourth after a closing stint of Lind pushing to the limits of the car initially, before settling in to a more comfortable pace to ensure the title went their way.

“It’s been a tough season, the last time we were here we DNF’d and quite far down the order but we’ve just turned it around. Since then, we have just extended [our points lead], others caught up, and then we extended again. I’m super-happy that I’ve spent the season with a crazy guy like Leo!” Lind told GT REPORT, in an excerpt from an interview which will be published in full later this week.

This British GT title is a second for Machitski, who secured the GT3 crown in 2006 – the first year the rules were run in the championship, as a secondary class to GT2 machinery. The pair eventually won by 9.5 points over Buurman and Loggie, the Lamborghini pair recording just the one DNF throughout a season which brought a win and four podiums. Their second-worst result? A fifth at Snetterton. 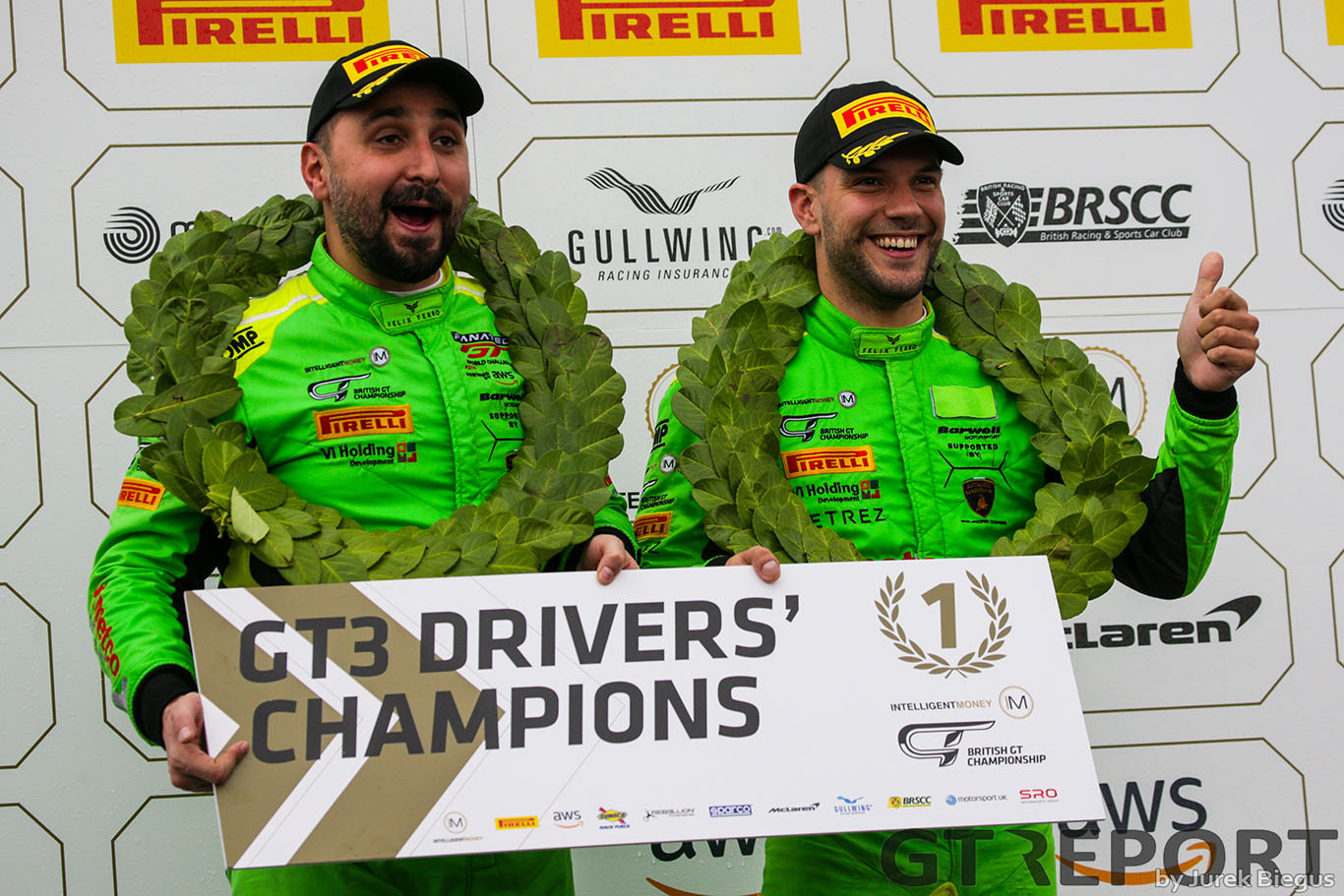 A fastest lap for Lind also secured his sixth Fastest Lap of the Weekend Award in seven race weekends, only missing out on a clean sweep thanks to their Donington DNF.

Third in the race went to the Nearys, a fitting end to what’s been a good year for the Team ABBA crew and yet more proof that Sam Neary is a rapidly rising star of GT3 racing, recovering valiantly from his slight off to ensure a place on the podium to end 2021.

Reigning champions Adam Balon and Sandy Mitchell took fifth. The pair didn’t put a foot wrong in the #1 Barwell Huracán, but in the changeable conditions they didn’t quite have the pace to really put trouble on the cars ahead – save for Balon’s marvellous racing against Machitski early in the first hour.

Scott Malvern and Nick Jones finished sixth, Malvern was right on the back of Mitchell in the closing minutes, but the late red flag denied him what could have been a chance of snatching fifth away in the Team Parker Racing Porsche 911 GT3 R.

On their return to the championship, Mia Flewitt and Euan Hankey took seventh – Hankey snatching the position away in the final quarter of the race from Beechdean’s Jonny Adam, the Aston Martin team relegated down the order after a coming together – deemed a racing incident – with Machitski which sent Howard spinning. 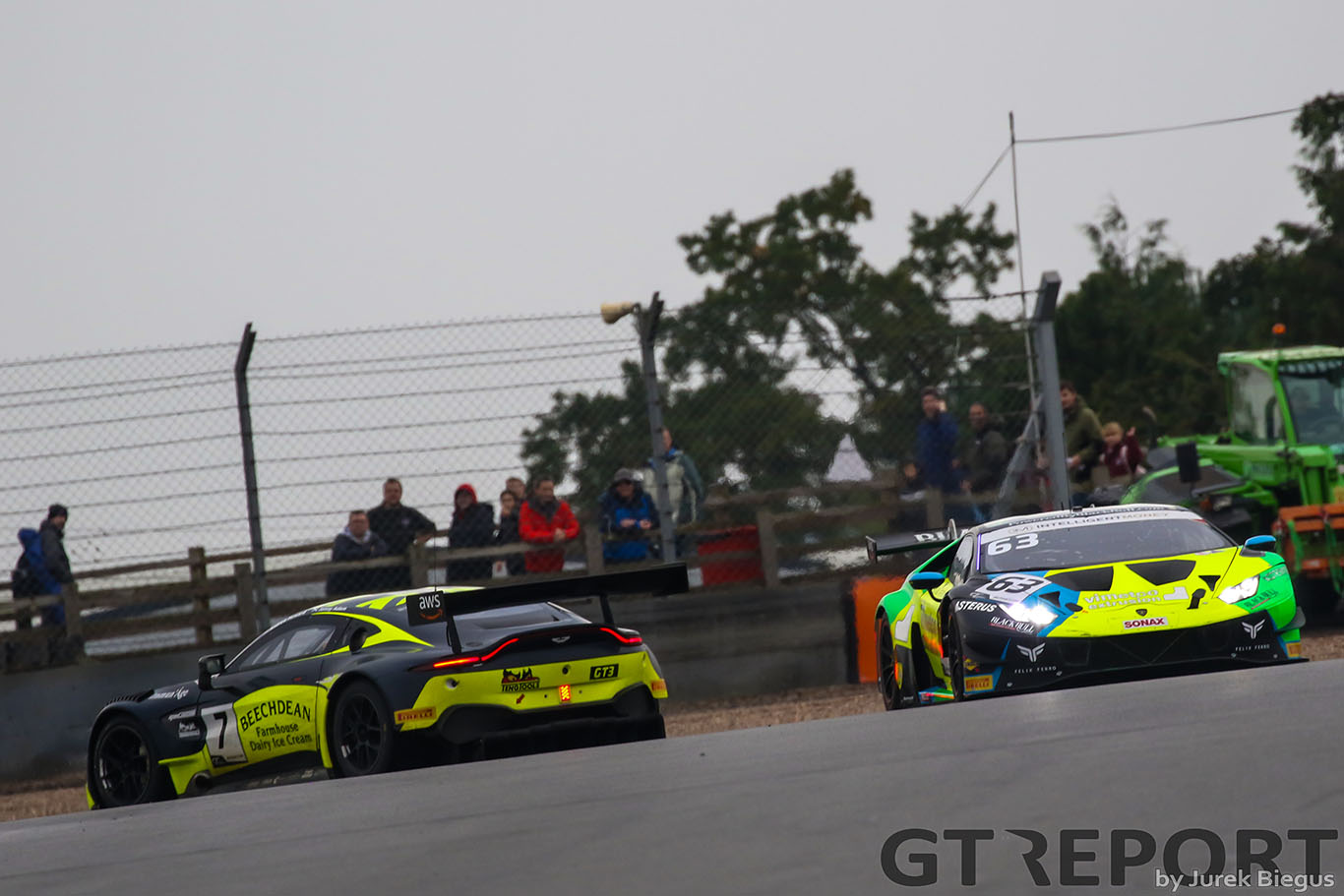 Balfe Motorsport and Paddock Motorsport rounded out the top ten, both cars spinning at different points of the race as the track dried slower than expected.

With the overall title no longer on the line, the GT4 battle swung rapidly between a trio of crews – namely new champions Will Burns and Gus Burton, Michael Benyahia and Alain Valente, & Will Moore and Matt Cowley.  It would have been a quartet, but mechanical issues afflicted the Steller Motorsport Audi throughout the race to deny Richard Williams and Sennan Fielding the chance of converting pole to victory.

That trio seemed to circulate their way through the top spot throughout the 120-minute finale, with Benyahia leading for much of the opening hour having dispatched Williams early on to move the Team Rocket RJN McLaren to the top.

By the pit window though, he was displaced by Burns who moved up from the bottom of the top five to claim the lead in the Century Motorsport BMW M4 GT4. 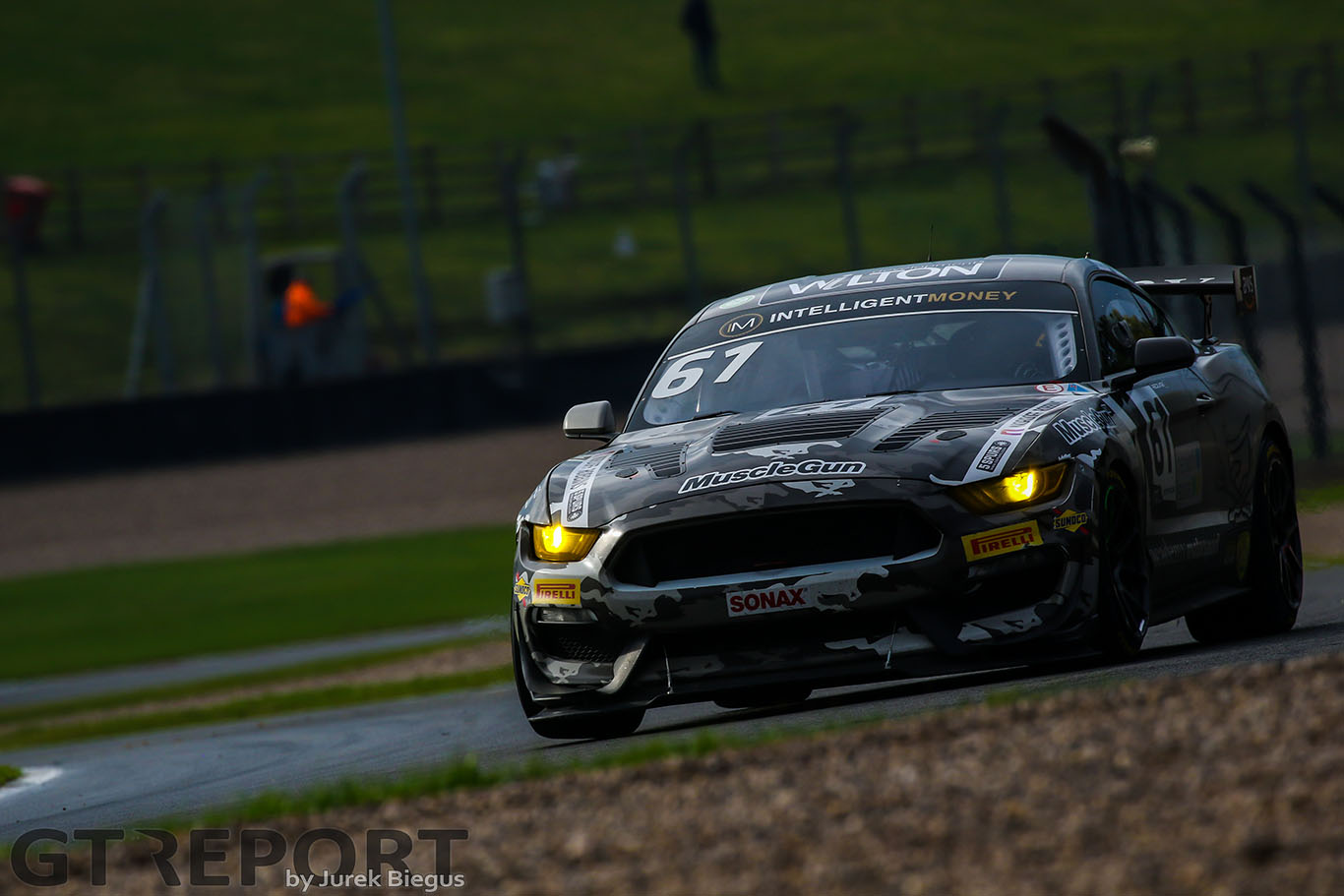 Success penalties in the pits meant that shuffled around, with Valente shuffled back into the lead and defending from Cowley. The latter was looking rapid in the Mustang having fitted slicks at the mandatory stop and used the sheer grunt of the Ford to power his way ahead just as the clock ticked down to 30 minutes to go.

He held on to that lead until the flag, with a slender two-second advantage over Valente and Benyahia, while Burton and Burns rounded out the overall podium.

Despite winning the Pro-Am category, and finishing fourth overall, Nick Halstead and Jamie Stanley couldn’t deny Darren Turner and Matt Topham scooping the Pro-Am crown for Newbridge Motorsport – finishing fifth at the end – despite Stanley absolutely flying up the order in the Fox Motorsport McLaren. 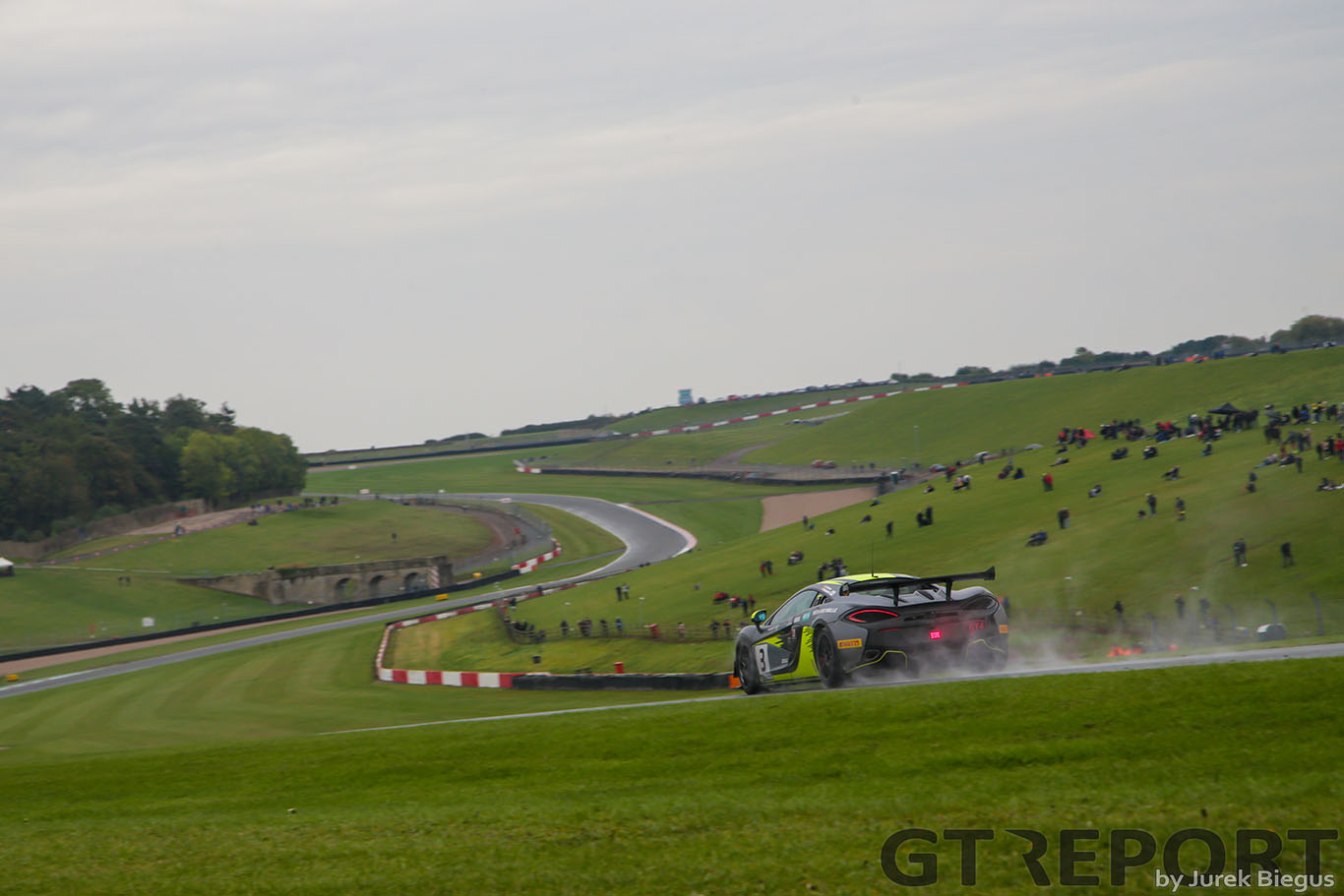 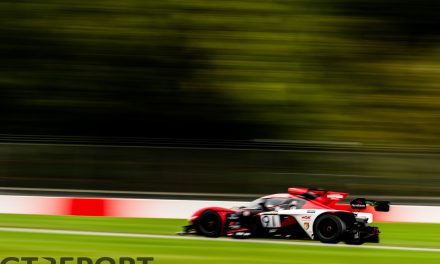 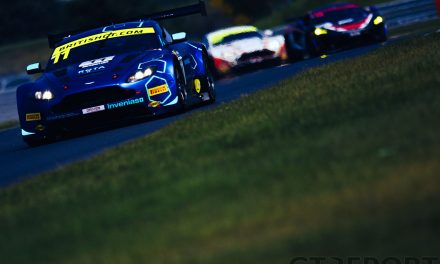 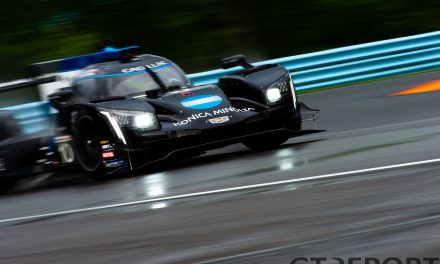