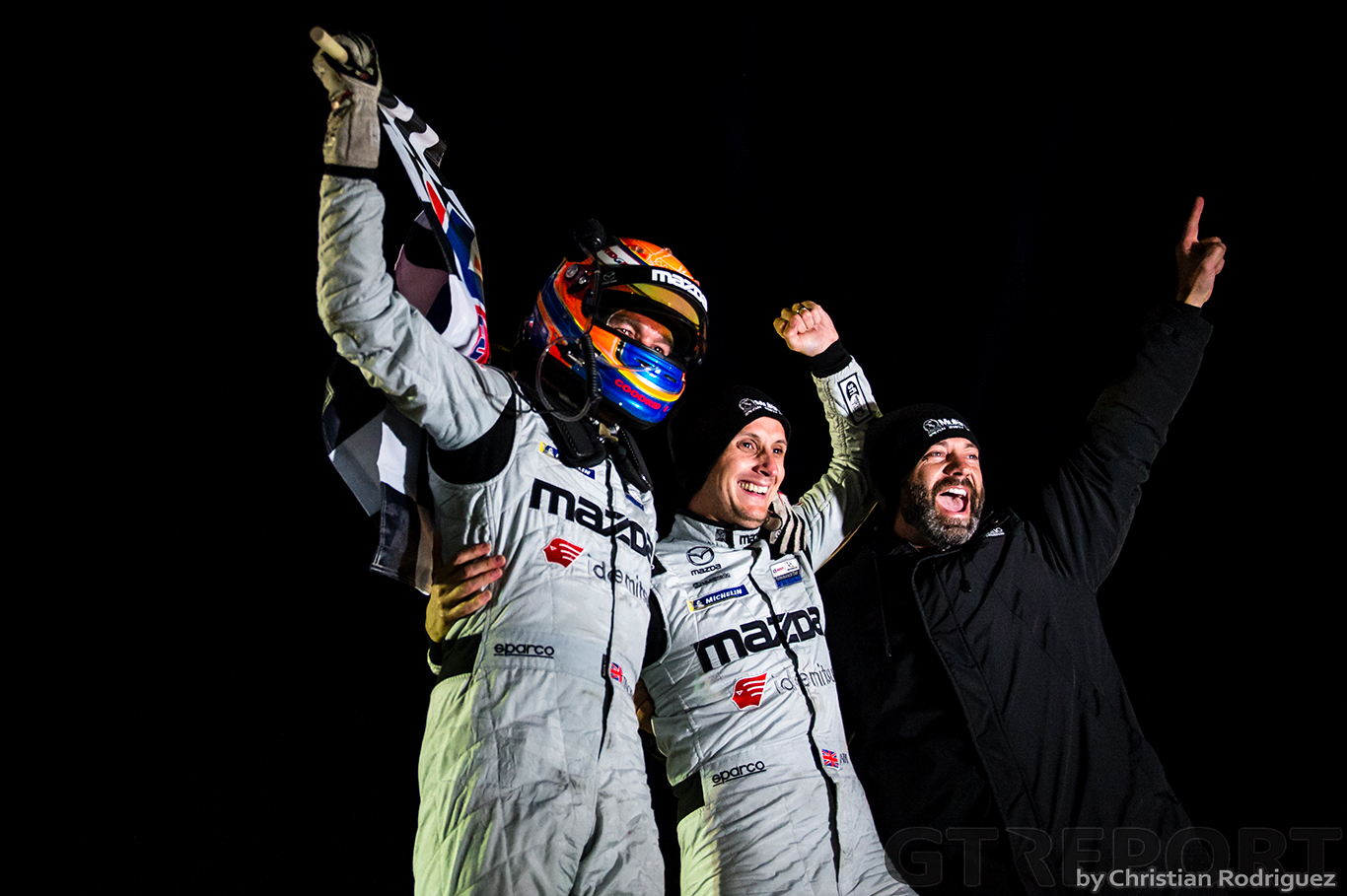 Mazda bowed out of the IMSA WeatherTech Sportscar Championship in style as it went from three laps down to win by just a handful of seconds in an action-packed Petit Le Mans.

The final event for GTLM – based on GTE rules – went to WeatherTech Racing which took a one-two with its pair of Porsche 911 RSR-19s. 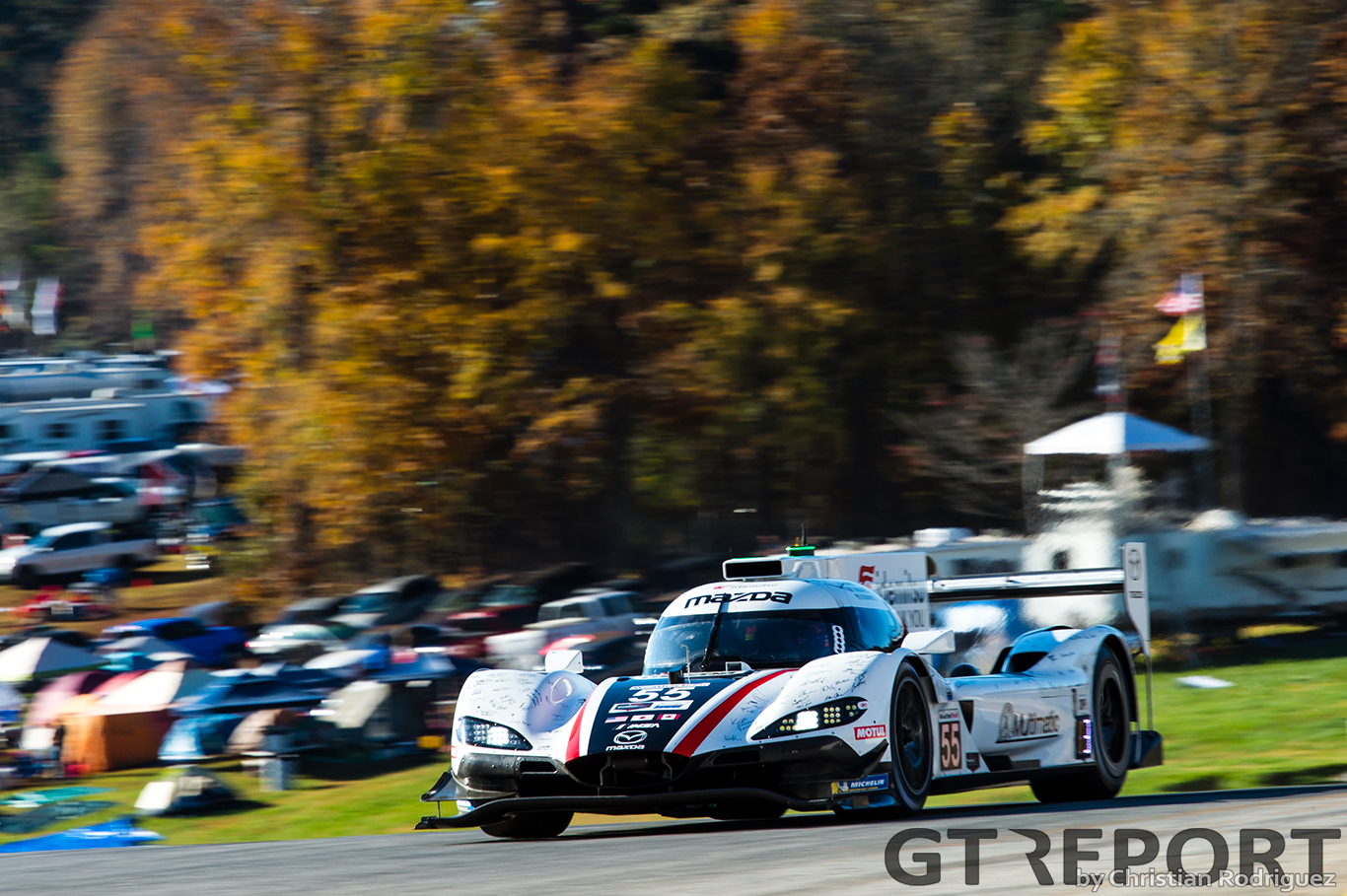 The fact that Mazda was even in a position to take victory in the season-closing Petit Le Mans sums up the determination of the entire team and being at the right place at the right time.

The car, driven by Harry Tincknell, Jonathan Bomarito and Oliver Jarvis, started out strongly and indeed led at the end of the opening hour. However, an engine issue for the DPi put them three laps down on the rest of its class competition and seemingly out of contention.

What then unfolded was just sheer bloody-minded determination. The trio fought their way back up onto the lead lap – benefitting from numerous full course yellows – and set about charging down the race leading Cadillac of Nasr, Derani and Mike Conway.

Coming into the final hour of the 10-hour battle around Road Atlanta just a handful of seconds behind the Action Express Racing-run entry, Tincknell made the decisive move for the lead with just under half-an-hour remaining and held on until the flag – winning by 3.297sec.

His charge to the finish was made easier by a captivating battle for the overall IMSA title unfolding behind. Knowing he needed to stay in front to have the best chance of taking the crown, Nasr was involved in a thrilling scrap with Wayne Taylor Racing’s Ricky Taylor to see who would claim the runner-up spot.

Taylor, sitting behind in his Acura DPi, went for a do-or-die lunge on Nasr at Turn 10a – the downhill left-hander – but went in too hot and slid his way through the gravel trap. That gave the Brazilian the chance to retake his second and cross the line with just half-a-second advantage – taking the title by only 11 points. Taylor, racing with Filipe Albuquerque and Alexander Rossi, finished third.

After the race, Derani told GT REPORT: “I’m lost for words! I think it’s been a fantastic year, such a difficult beginning but now to become champion is just unbelievable. Thanks for the whole team of Action Express Racing and Whelen Engineering. We had a difficult end to last season, difficult beginning to this season and then to be finally be a champion – it’s going to take time to sink in.”

Outside the podium places was a great finish for the second of the Action Express Cadillacs – that of Jimmie Johnson, Kamui Kobayashi and Simon Pagenaud – which prevailed in a scrap with Chip Ganassi Racing after the latter team lost time with a loose brake disc late on. That the Ganassi Cadillac still finished fifth was a testament to the speedy repair work by the team, which included a surprise late addition of Earl Bamber, replacing Kevin Magnussen after the latter felt unwell before the race. 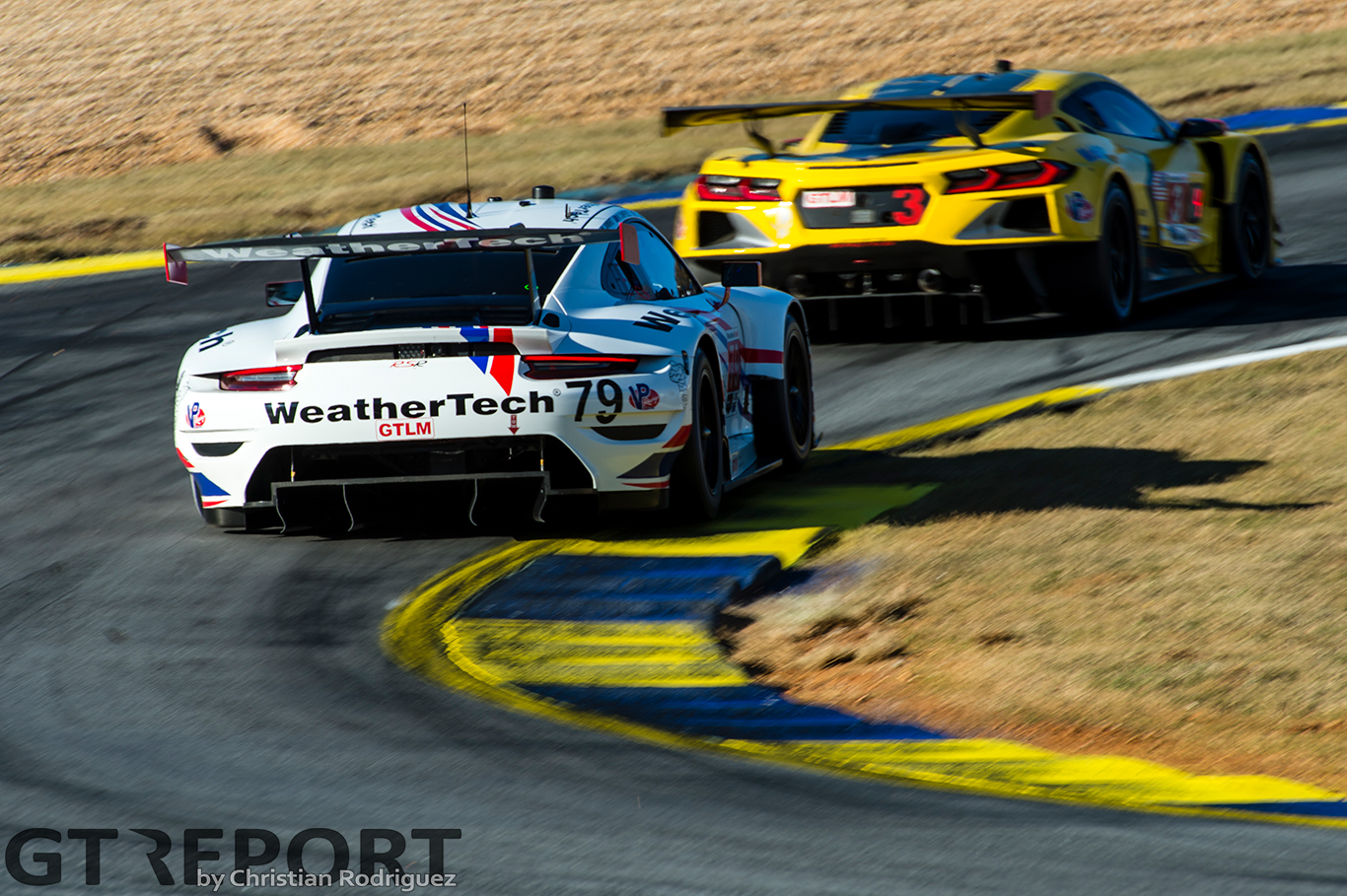 The final time GTE-spec cars will be seen in action in North America before being replaced by GT3 didn’t disappoint as the class was won in a one-two by Porsche racers WeatherTech Racing in a thrilling battle with Corvette.

For the majority of the race, certainly in the final five hours, the contenders for victory fell to the two Porsches and the #4 Corvette C8R of Nick Tandy, Alex Sims and Tommy Milner with anyone of the trio a viable contender for the victory.

With strategy keeping all three cars roughly together, the winner would be decided by however could outmuscle their rivals on the track, and that was certainly the case for Kévin Estre – in the #97 Porsche – and Tandy. Estre first passed Mathieu Jaminet in the #79 911 and was quickly onto the back of Tandy’s Corvette.

That fight quickly got aggressive during the penultimate hour, when Estre tried to force a move going into turn 10, which the Corvette driver fought off – causing some slight damage to the Porsche which meant Estre had to pit.

The off-sequence penultimate stop ultimately played into his hands. Pitting later than his rivals for his final stop, he was quickly onto a faster pace than both his rivals and, combined with the Corvette retiring after coming into contact with the race-winning Mazda DPi in the final 10 minutes, was in a position to take the GTLM honours.

On the tail of Jaminet, the team elected to switch the two Porsches, with Estre’s entry – which he shared with Cooper MacNeil and Matt Campbell – a full-season entry compared to the one-off run for Jaminet, Fred Makowiecki and Michael Christensen.

With Tandy not coming back out of the pits after the damage, the final space on the podium went – rather fittingly – to the big BMW M8 GTE of BMW Team RLL in the car’s final race before being replaced by the BMW M4 GT3 next season. Jesse Krohn, John Edwards and Augusto Farfus the podium trio for the German manufacturer.

Indeed, that was the last car still running at the flag thanks to retirement for the sister M8 and the #3 Corvette which suffered a scary crash whilst Jordan Taylor was driving. A compression in the field going into turn 10 on a restart after a full course yellow caught out an unsighted Taylor who smashed into the back of a group of near-stationary GTD runners. He was thankfully fine, and at least already had the GTLM title in the bag, having won the crown alongside Antonio Garcia for just starting the race. 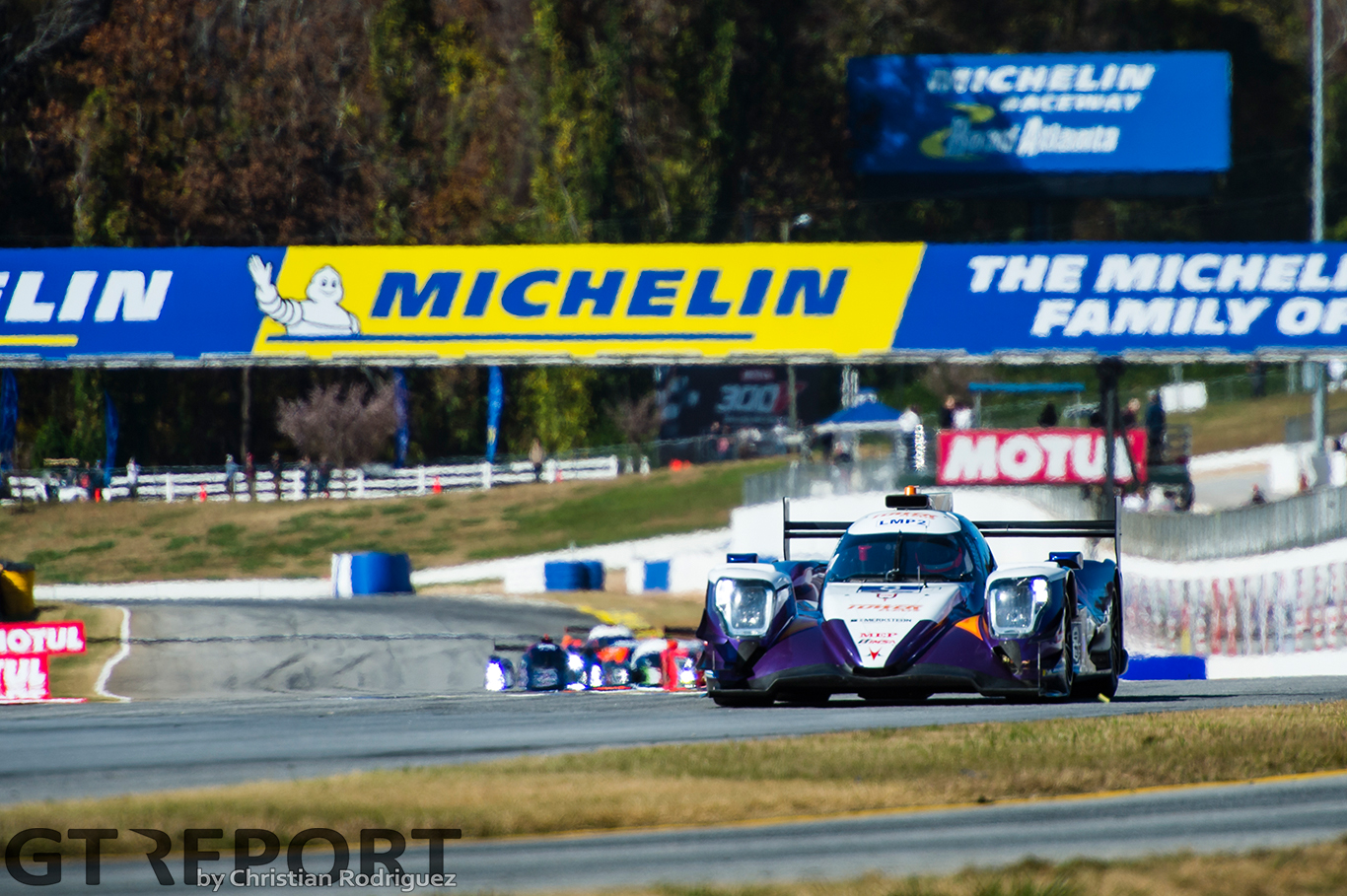 Like in GTLM, just starting the race secured the LMP2 title for PR1 Mathiasen Motorsport’s Ben Keating and Mikkel Jensen. Despite crossing the line first, the pair were demoted from victory after Jensen was given a time penalty for contact with Gabriel Aubry as the pair did battle around Road Atlanta on the final lap.

That penalty handed Aubry the win, in the Tower Motorsport Oreca he shared with John Farano and James French, having been involved in a great battle with Keating, Aubry and Scott Huffaker for the majority of the race – despite the latter trio losing a lap early on having to replace the nose of their car thanks to early damage.

Indeed, the eventual contact that led to Jensen’s penalty took place on the final lap as he and Aubry did battle in a thrilling scrap to see who would take victory.

Besides that, it was a relatively quiet race in the secondary prototype class, with the lead two the only cars still on the same lap with both the WIN Autosport and United Autosports entries finishing one and two laps down respectively.

Era Motorsport failed to finish in its wonderful crayon-liveried Oreca, after a scary crash early on while being driven by Dwight Merriman. 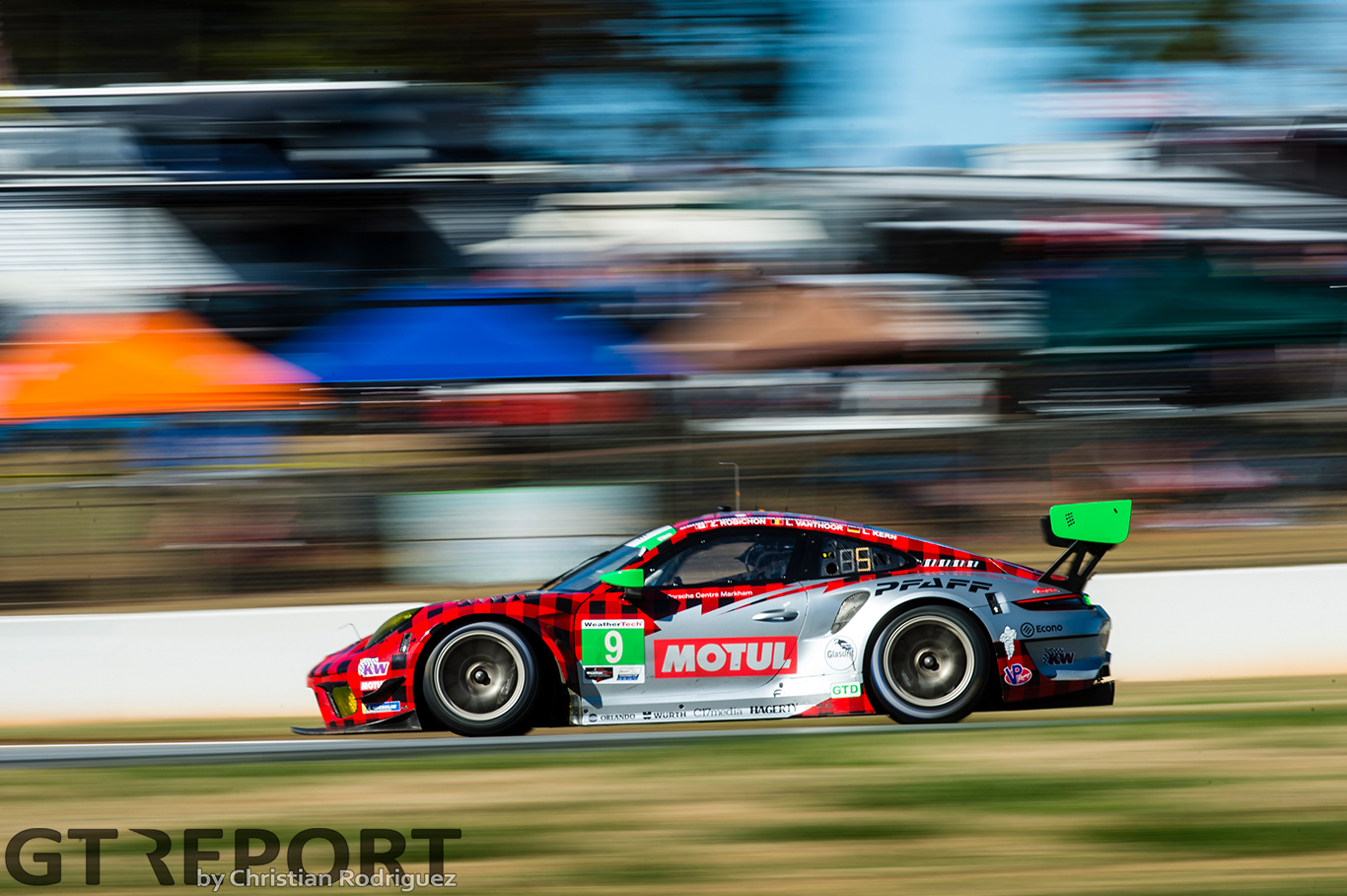 Heart of Racing won the race, but it was Pfaff Motorsport who claimed the title as the GT Daytona class went the way of Zach Robichon and Laurens Vanthoor in what was a demonstration of just how good multi-marque GT3 racing can be.

Indeed the battle for the race win wasn’t decided until pretty much the final lap as Ross Gunn – in the Heart of Racing Aston Martin – fought off Vanthoor as he tried his best to maintain his own title challenge alongside Roman De Angelis.

Set up in the early running by great stints from Ian James and De Angelis in the Aston, and Robichon and Lars Kern in the Porsche 911 GT3R, the race boiled down to a fabulous scrap between Gunn and Vanthoor.

Swapping the lead on a regular basis, and three times in the final hour alone, Gunn finally made the decisive move with just over 30 minutes left on the clock and crossed the line with almost nine seconds in hand over the Porsche.

While Vanthoor and Robichon handily took the title, it could have been an even more thrilling title showdown had the Paul Miller Racing Lamborghini Huracán – which qualified on pole – not lost time through contact with an LMP3 early on and lost time getting repaired behind the wall. The car, driven by Bryan Sellers, Madison Snow and Corey Lewis, ultimately finished seventh.

Back up the order, it was Vasser Sullivan which rounded out the podium as Frankie Montecalvo, Zach Veach and Robert Megennis finished a lap down in their Lexus RC F GT3 – just a fraction ahead of the Allegra Motorsport Mercedes-AMG GT3.

In an attritional race for GTD, only nine of the 15 starters took the flag with all six retirees coming from pretty much the same incident – the compression and multi-car pile-up that also cost Jordan Taylor his race in the GTLM Corvette.

If the action was to be found anywhere, it was to be found in LMP3. The junior prototype class caused five of the 10 cautions that broke up the race thanks to various spins, accidents and off-track excursions.

Ultimately, the class honours boiled down to how could keep out of trouble for the longest and that proved to be the veteran Riley Motorsports outfit as Gar Robinson, Felipe Fraga and Scott Andrews took the honours in their Ligier one lap ahead of their nearest rivals.

That ended up being the Jr III Racing entry of Spencer Pigot, Ari Balogh and Garret Grist, which themselves had a pretty quiet run to the line being three laps up on the second Riley of Jeroen Bleekemolen, Dylan Murry and Jim Cox.

It was Robinson who took the inaugural LMP3 championship in comfortable fashion, thanks to his nearest rivals – Colin Braun and Jon Bennett – retiring their Core Autosport Ligier in the ninth hour. 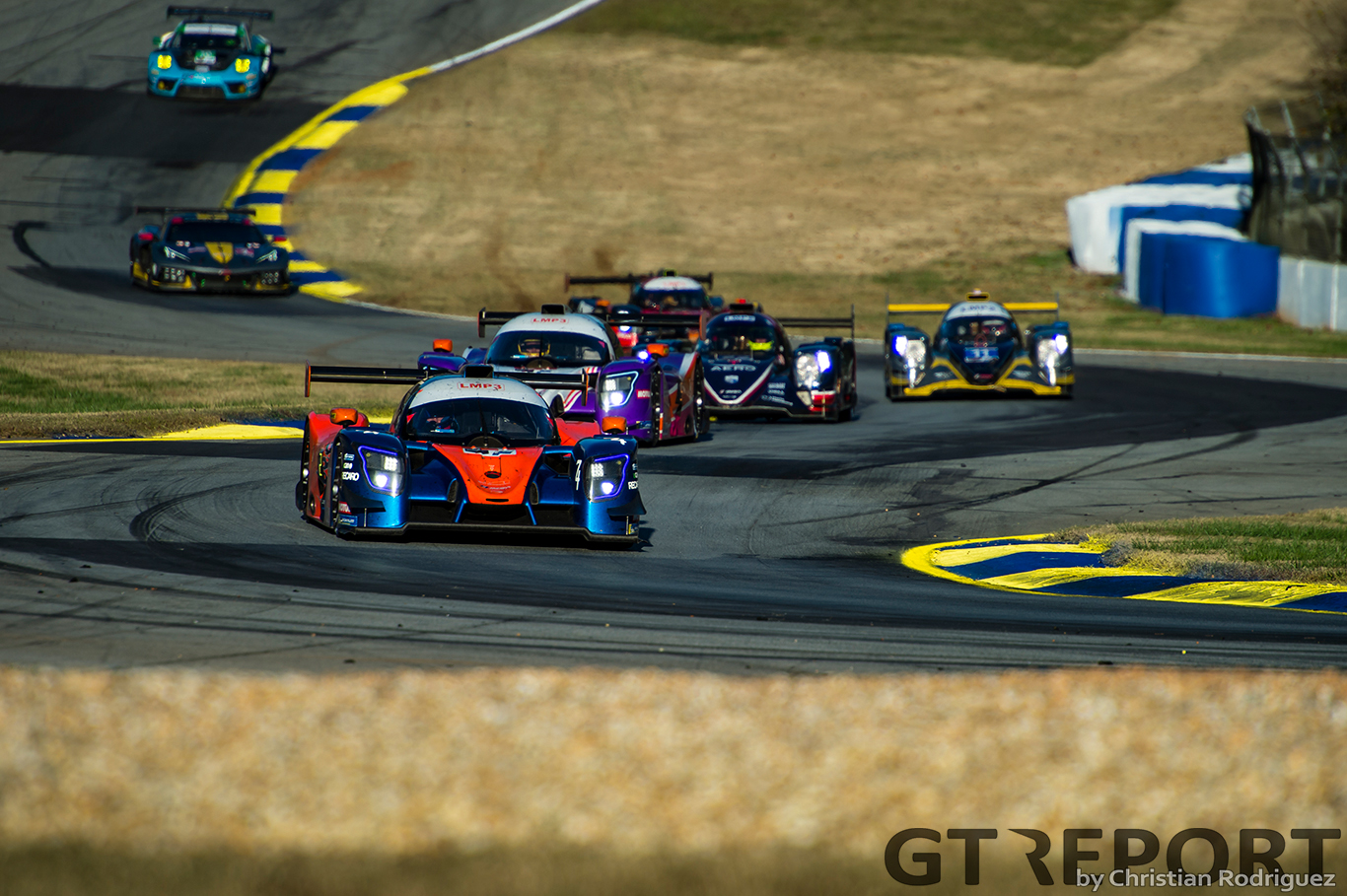 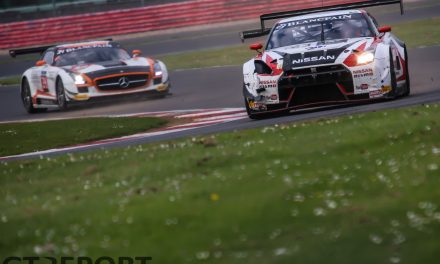 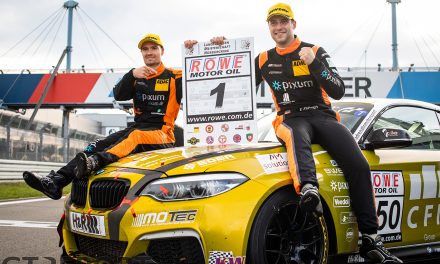 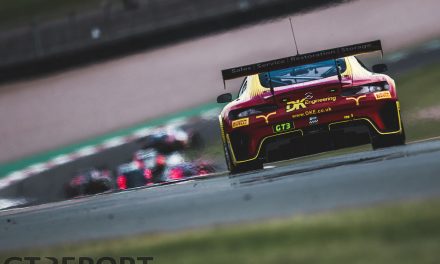