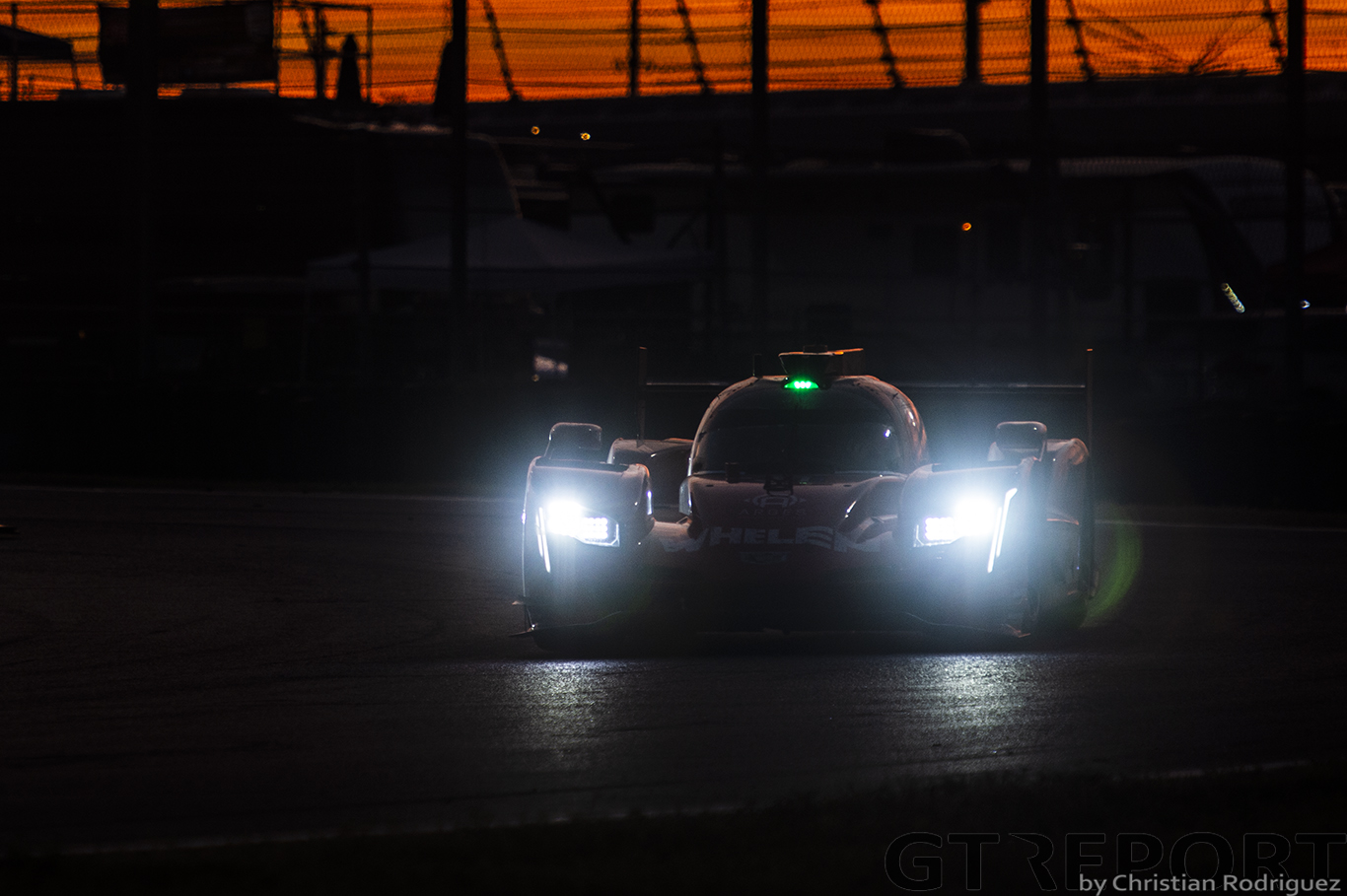 The Acti0n Express Racing Cadillac leads the Rolex 24 at Daytona with just under nine hours remaining after a well-timed safety car moved the Whelen Engineering-sponsored DPi into the lead of the IMSA WeatherTech Championship’s season-opener.

While Derani ended the 15th hour in the lead, it wasn’t the fairest reflection of how things have stood for the last few hours, with Cadillac Racing’s #02 mainly driven by Kevin Magnussen the longest of the leaders recently.

LMP2 is currently led by Racing Team Nederland in a three-way fight for the top of that class. Riley Motorsports has a comfy lead in LMP3, while Pfaff Motorsports and Winward Racing lead in GTD Pro and GTD respectively.

Early leaders Ally Cadillac have lost 23 laps to the lead and slipped way down the order after Jimmie Johnson was involved in contact with the AWA LMP3. That caused significant right-rear damage, both to suspension and bodywork, the #48 is now back out after great work from the team to repair that.

Losing even more laps was another early leader, the #01 Cadillac Racing entry which suffered from a technical problem which led to the Chip Ganassi crew having to take significant time to replace the alternator. That car is back running but, again, well down the order.

Of the five cars that remain at the sharp-end, anyone of them remain a contender at this point, with the field cover by around 40 seconds.

At the moment, it’s advantage Action Express thanks to a caution just as the clock ticked down to nine hours to go thanks to what looked like quite a nasty fire for the #7 Forty7 Motorsports LMP3 off-track at the first couple of corners sparking a Full Course Yellow. Thankfully, the driver of the car appears to be fine.

That means behind the lead of DPi, it’s the #5 JDC Miller car running in second and Wayne Taylor Racing in third – the highest of the Acura DPis.

Fourth is the #02 Chip Ganassi Cadillac which had led for the majority of the last few hours, but pitted just before the caution period. Alex Lynn is behind the wheel and ahead of the Simon Pagenaud-driven Meyer Shank Racing Acura. 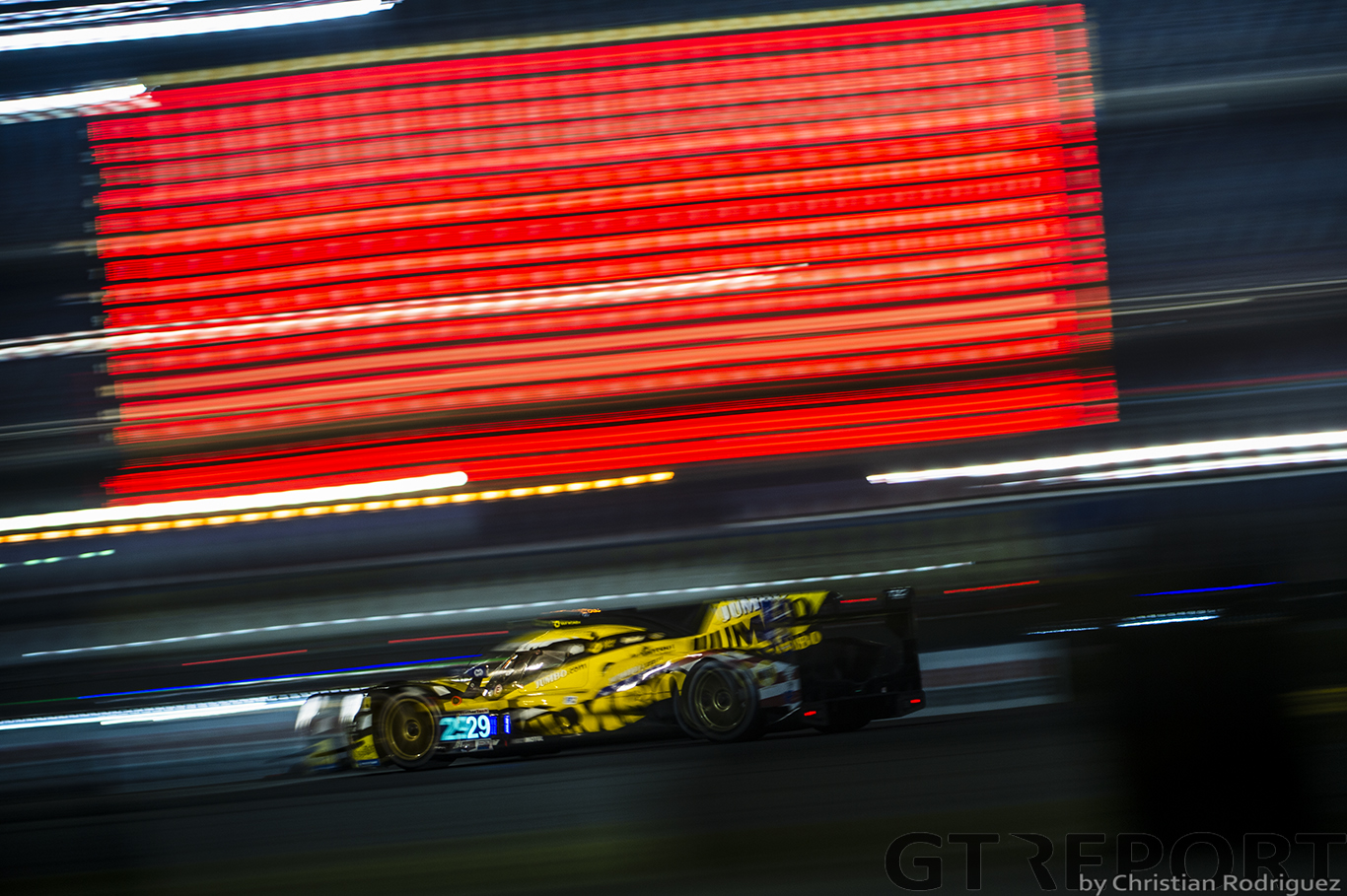 There’s been changes in the LMP2 category too, as erstwhile leaders PR1 Mathiasen Motorsport lost a bit of time overnight and his slipped to the lower-end of the top five about 90 seconds off the class lead.

The lead itself is being split between currently leaders DragonSpeed USA, Racing Team Nederland and Tower Motorsports. Different pit strategies mean the lead is swapping between the trio, with all of them lying within a 30-second margin of each other when all were running on track before the caution at the end of the 15th hour.

Fourth is currently the #69 G-Drive Racing by APR ORECA, with the #52 PR1 Mathiasen entry the last car on the lead lap in the class in fifth.

The second G-Drive entry is sixth, with United Autosports seventh, and the second PR1 Mathiasen entry in eighth. After causing the first caution of the race, the Era Motorsport crew has done a great job to get the #18 repaired and running again in ninth.

This is probably the simplest class to write about, as there’s one key thing really to note – Riley Motorsports is leading. Comfortably.

An absence of any issues – hopefully avoiding cursing the #74 squad – has meant the Ligier currently being driven by Felipe Fraga has a two-lap advantage over the rest of the class. 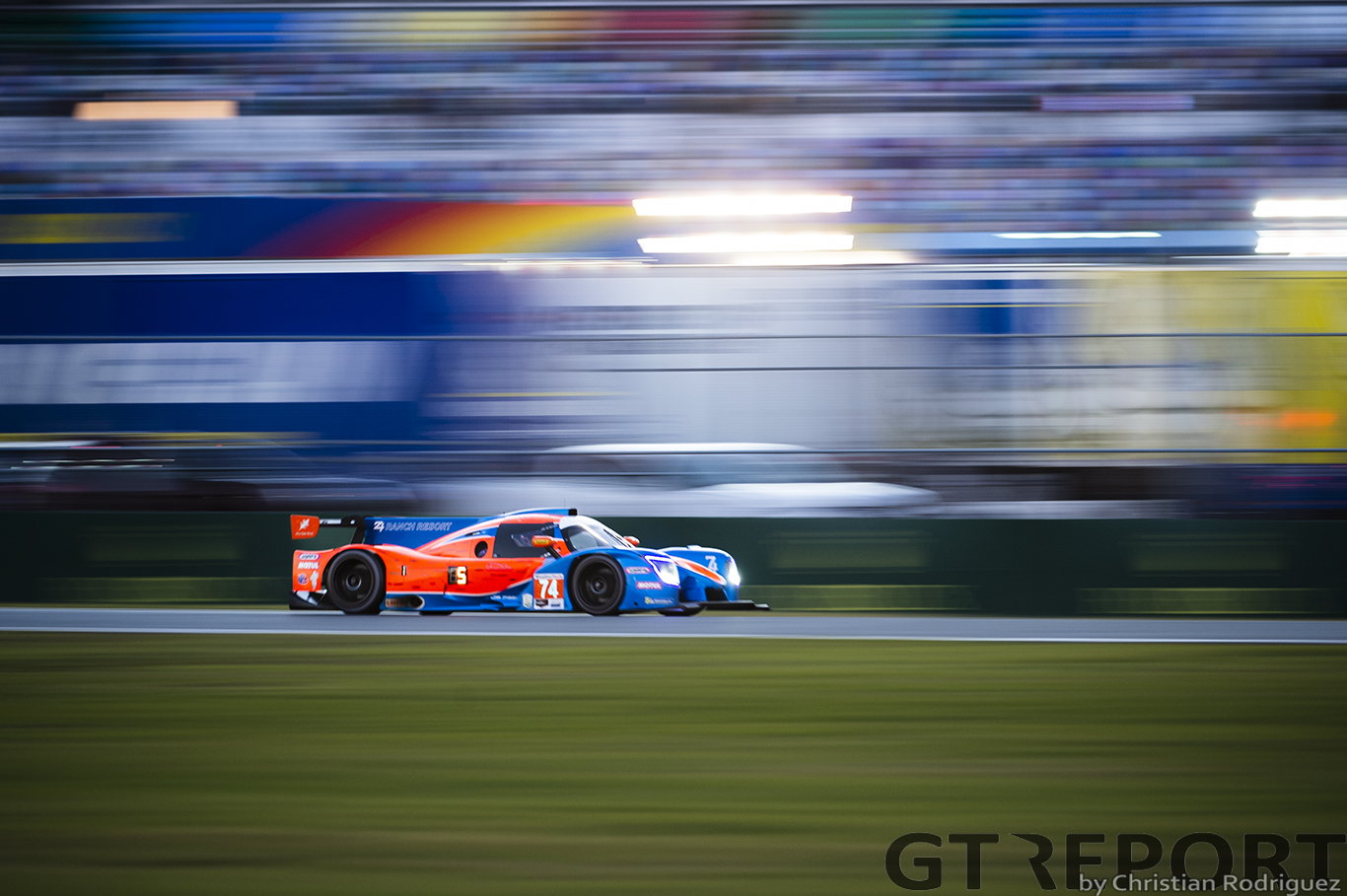 The battle behind is still quite tasty, with four cars all on the same lap as each other – albeit without much luck of catching the Riley unless fate intervenes. The scrap for second includes Sean Creech Motorsport, Core Autosport, Andretti Autosport and AWA, all blanketed by about a minute and all of them in real contention of standing on the podium when the clock finally ticks down to zero.

From one of the most comfortable classes, to the tightest. The top five cars in GTD Pro are covered by 20 seconds and in theory anyone of them could win this.

As it stands at the moment, Jules Gounon had a half-a-dozen second lead in his WeatherTech Racing Mercedes-AMG GT3 over Mathieu Jaminet’s Pfaff Motorsports Porsche 911 GT3 R. However, the caution to recover the LMP3 has seen those two positions swap, with the Plaid Porsche moving up to the sharp-end.

Throw into the mix the VasserSullivan Lexus, the KCMG Porsche and the Proton USA Mercedes and there’s a titanic scrap going on for the GTD Pro win that will no doubt be decided by who has the least misfortune and which team’s strategy gamble has paid off. 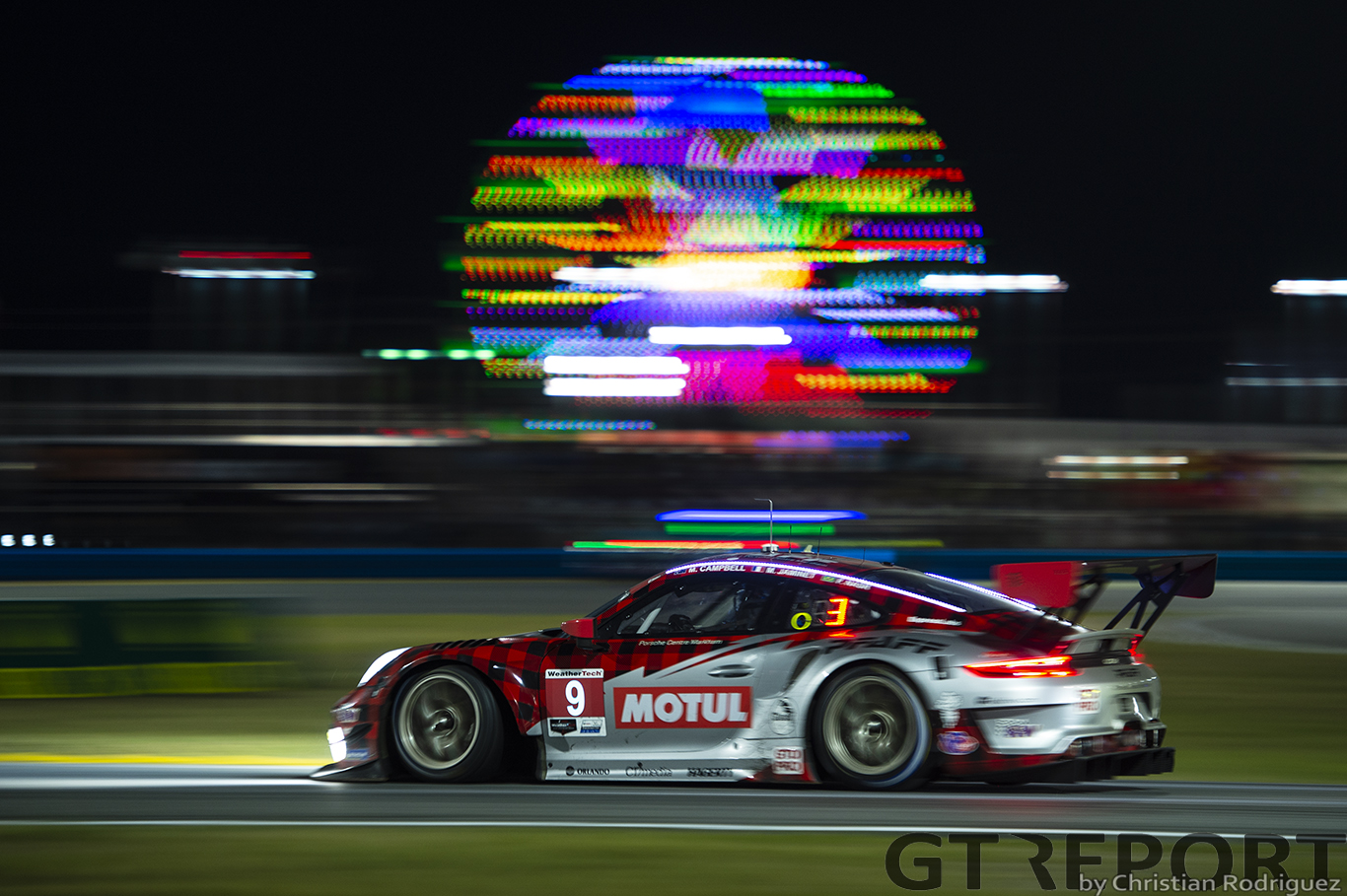 Unfortunately, the top five are really the only cars that could still win – perhaps with the exception of Risi Competizione which is just one lap down in its Ferrari 488. That’s because trouble has befallen many of the entries in the lead GT class.

Both Corvettes lost significant time with the team having to fix an array of issues not of the team’s own making overnight, with similar issues hampering both of the BMW Team RLL M4 GT3s. We’ve also lost the only Aston Martin in the Pro class, with the Heart of Racing entry having to retire with damage having been in the wrong place at the wrong time as it was tagged into a spin by the SunEnergy1 Mercedes as the latter lost the back-end going onto the banking. The Aston was then hit by an LMP3 to add even more woe.

Last, but not least, it’s GTD and things are slightly calmer than in the top class but still with an interesting battle shaping up as the sun slowly starts to rise.

Predominantly, the lead is swapping between the Winward Racing Mercedes, and the Wright Motorsport Porsche, but with this being an Am category and pit strategies taking cars off-sequence, really any of the top six has a chance of snagging themselves a Rolex.

The head of the chasing pack is the Magnus Racing Aston Martin, with Spencer Pumpelly putting in some great running in the darkness to sit in the podium positions.

Behind, the Gradient Racing Acura is nipping at the heels of the podium, with Mario Farnbacher hustling that car in the freezing cold Florida temperatures – keeping himself just ahead of the inception racing McLaren 720S GT3.

Rounding out the top six as it stands presently, is the AF Corse Ferrari 488 GT3 Evo which is having a quiet yet fruitful run through the night. 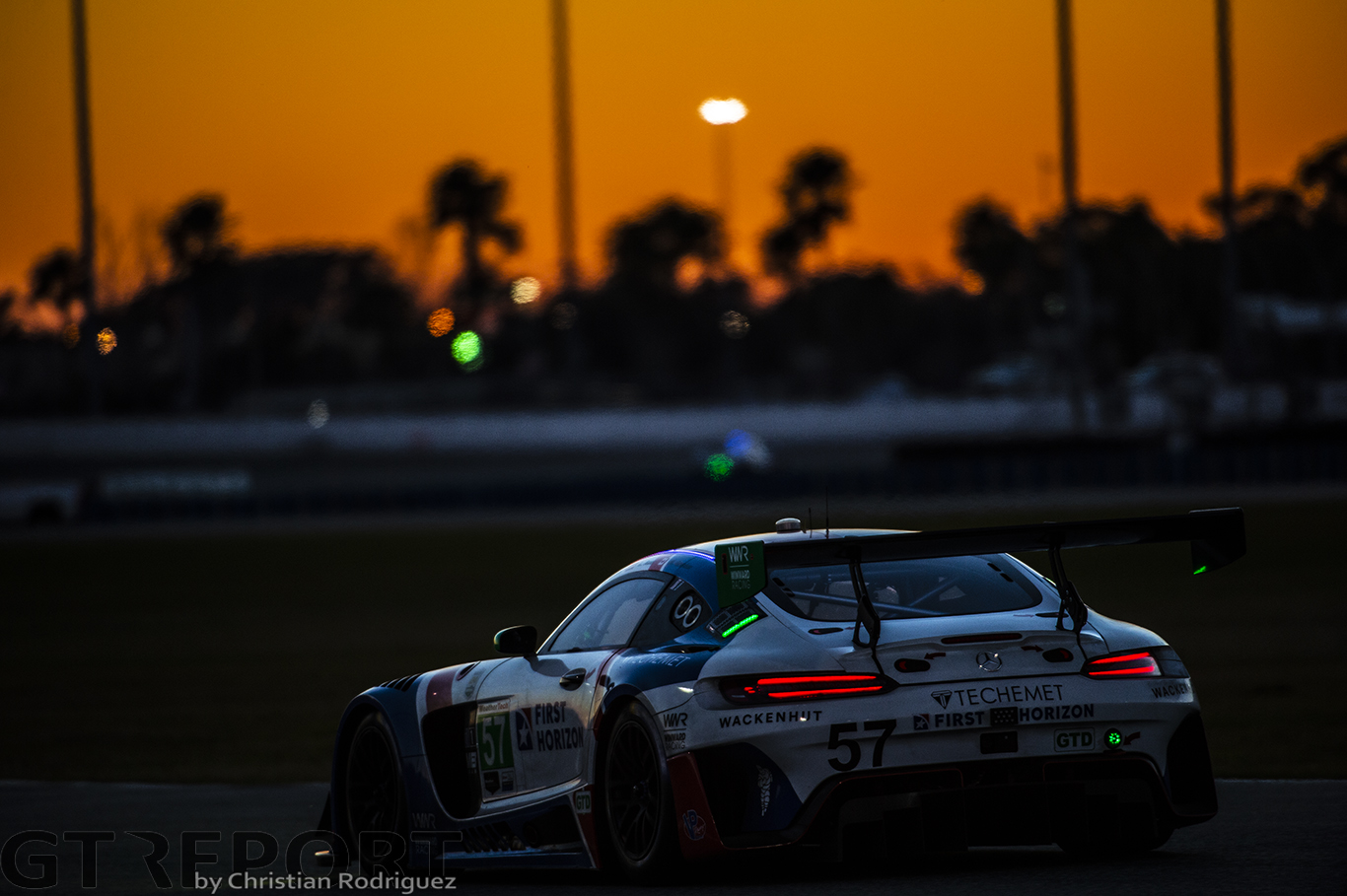