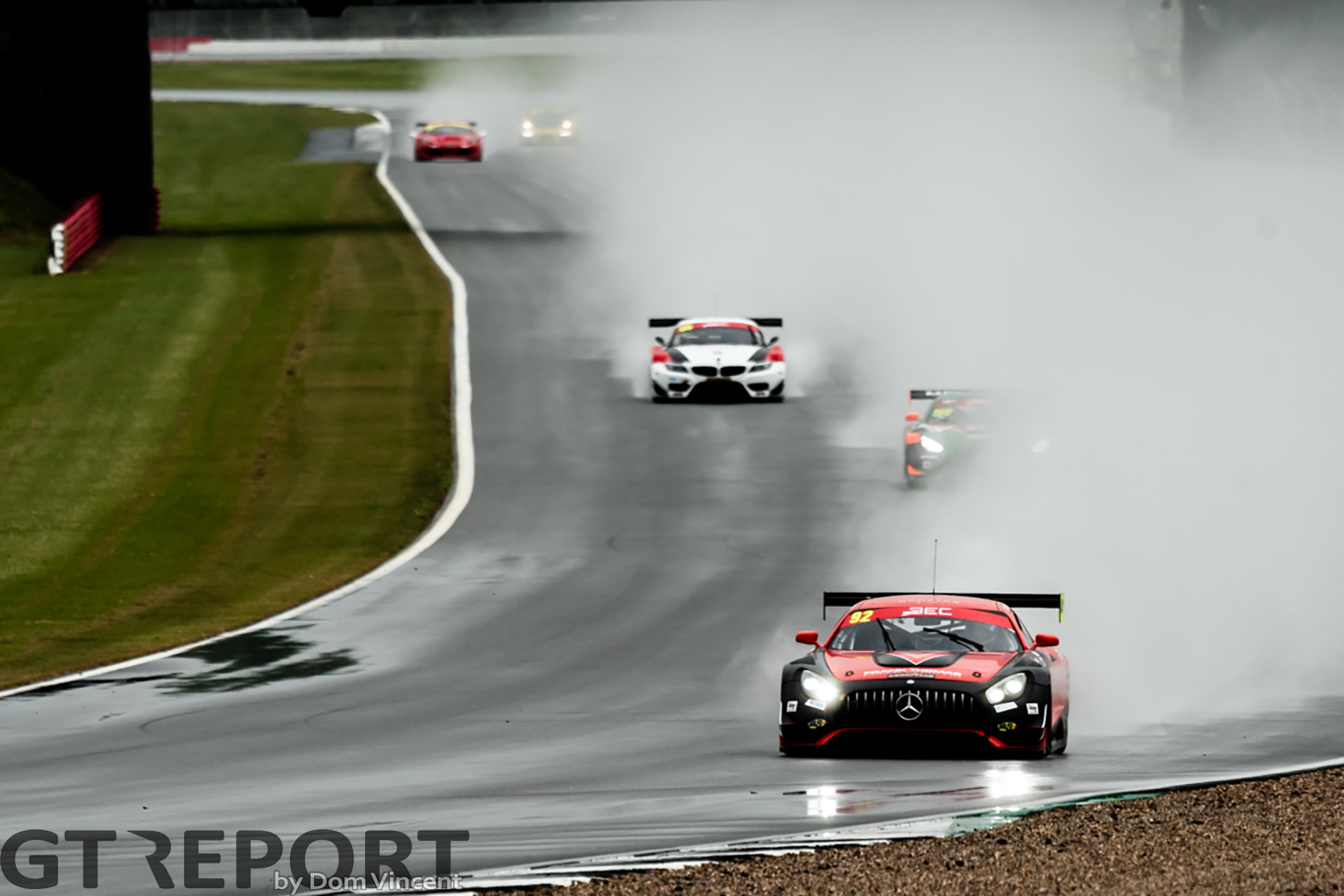 For Round 4 of the 2022 British Endurance Championship season, the circus made its second trip to the Silverstone GP circuit.

However, unlike last time, the teams and see would have to cope with an absolutely sodden track surface in what quickly became a race of survival.

Whilst 7TSIX didn’t return, Simpson Motorsport did. Regular drivers Hugo Cook / Sasha Kakad came so close to the overall title in 2021 only for their Audi RS3 TCR to put the brakes on proceedings (as they caught fire).

This time marked a new challenge for the duo, a Mercedes AMG GT3 was the car of choice albeit the slightly older generation car. But this didn’t seem to slow them down as Cook swiftly placed the car on pole position ahead of the two-hour race.

The other notable absences from Class A were the MacG Racing Taranis and the screaming Venture Motorsport Aston Martin Vulcan which suffered a gearbox failure last time out.

It was actually Kevin Clarke in the ING Sport BMW Z4 GT3 that launched beautifully from his lowly 8th position on the grid. By the time the pack reached Stowe, the old school BMW was up to third behind the Rob Boston Racing Mercedes. 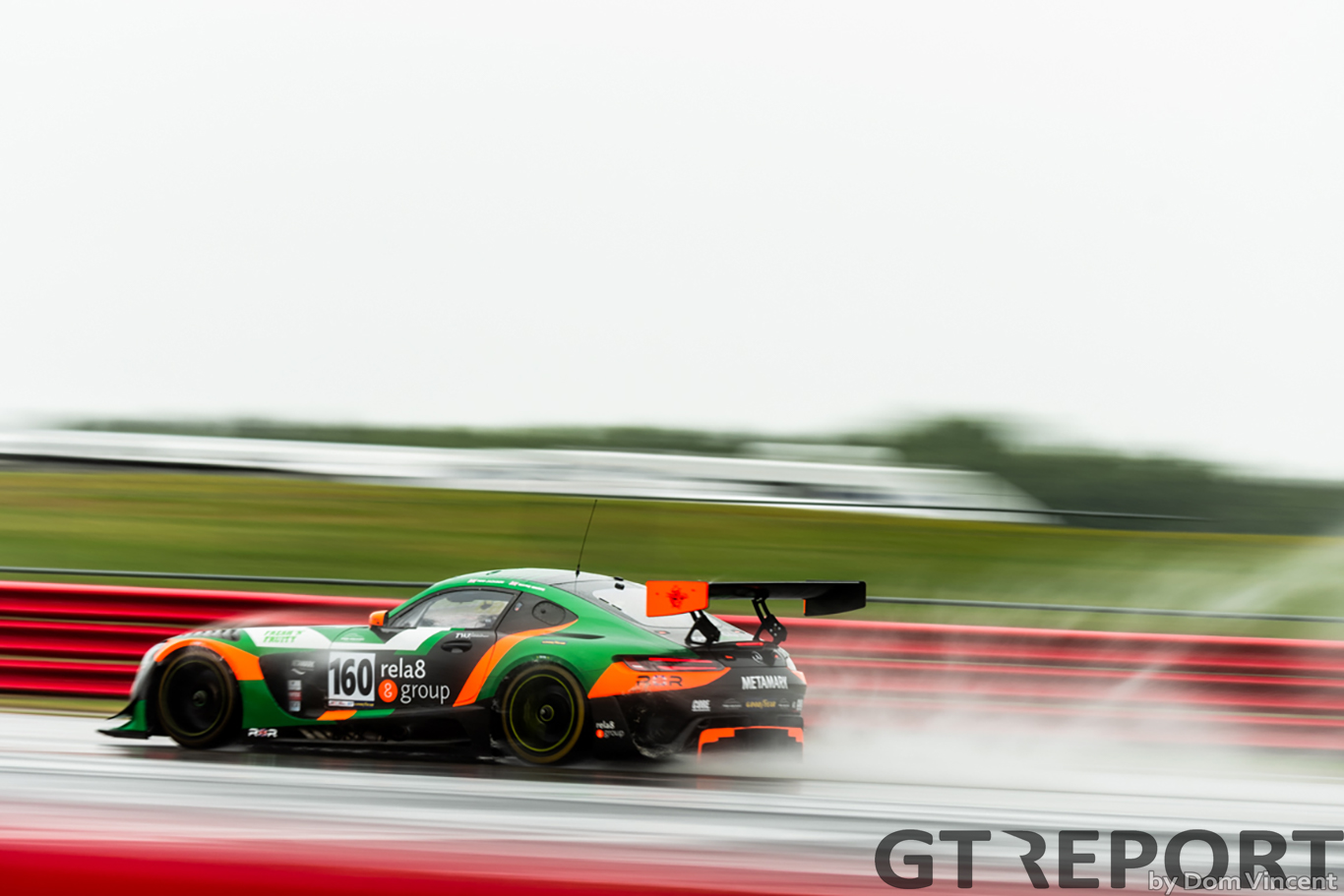 An early safety car nullified proceedings temporarily before Kakad pulled away on the restart. Clarke managed to pressure Wayne Marrs in his Rob Boston Racing Mercedes AMG GT3 before making his move before the first round of mandatory pitstops.

Tom Jackson took over from Marrs in the Mercedes and Ryan Lindsay swapped with Clarke but couldn’t quite live with the former as he soldiered on into the distance.

From then on he would remain unchallenged to the chequered flag to become the first double victor in class. That said, a loose wheel nut nearly derailed their hopes but somehow the car was brought home in one piece (the team not realising until after the car had returned from Parc Ferme).

Second place went to Cook / Kakad who comfortable brought their Mercedes home ahead of the ING BMW which rounded out the top three.

Clarke’s performance earned him the Britcar outstanding performance award after his heroics at the start of the race.

Class B saw three runners take to the grid all in Italian machinery.

William Tewiah made his first appearance in his Ferrari 488 Challenge Evo alongside seasoned veteran, Jonny Mowlem whilst Stanbridge returned with Chris Kemp / Dan Brown behind the wheel. 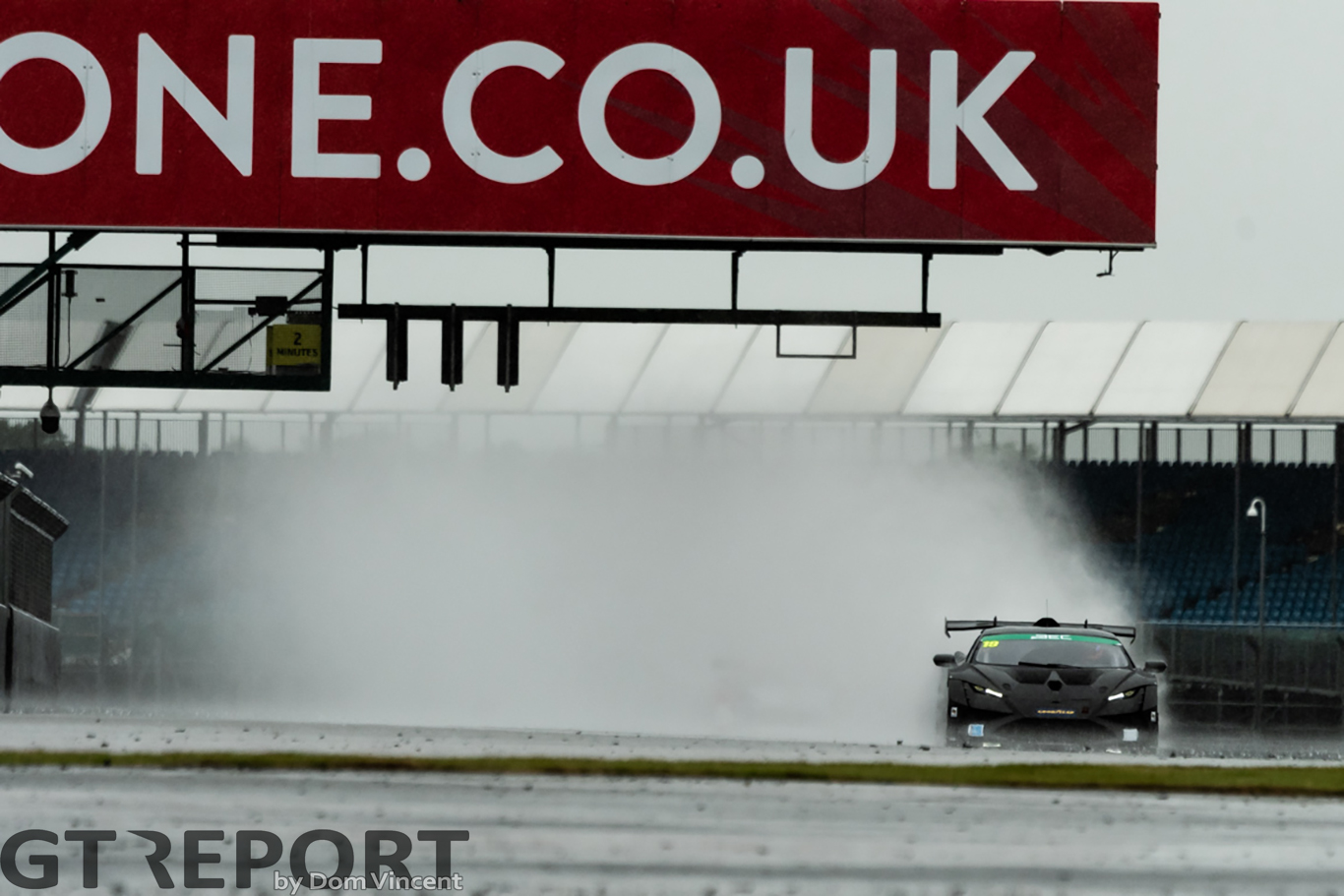 The race itself was relatively uneventful for the Blackthorn Lamborghini. Despite dropping back at the start, Bovet held his nerve and brought the car back in one piece as he handed the controls to McDonald.

From then on McDonald picked off his rivals one by one and assumed a one-lap advantage to his class competition.

Whilst Tewiah in his first start carefully peddled his Ferrari around out of trouble, Kemp in the Stanbridge Lamborghini had also dropped back in the tricky conditions.

The final stage is when things really heated up. Stanbridge had held second place for the majority of the race Mowlem but the Ferrari man was absolutely flying. Taking seconds out of the Lamborghini each time around meaning it was only a matter of time before he made his move. A splash and dash with just four minutes remaining all but ended their chances of retaining second as the Ferrari swooped past to clinch second by just five seconds.

Three runners would compete for Class C honours at Silverstone. Valluga Racing had replaced the engine in their Ferrari 458 Challenge which saw its return alongside RNR Performance Cars which brought their blue example out once again.

The father-son duo of Mark / Peter Cunningham made their first appearance of the season with their yellow Porsche 911 997 Cup Car. 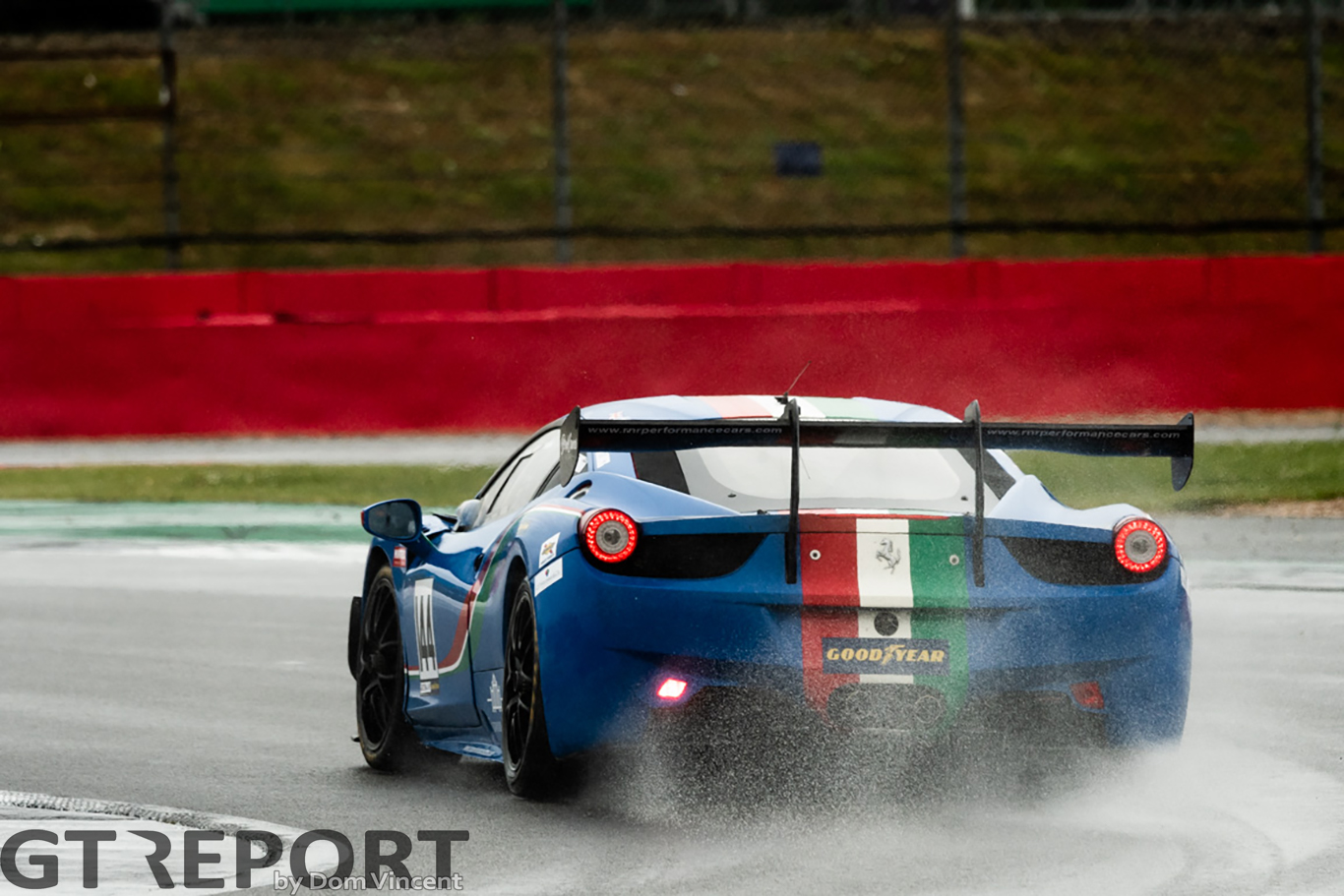 Valluga ran consistently well up the front of the pack just managing to stick with the Class A cars. Carl Cavers was the man behind the wheel and looked comfortable until a spin 30-minutes in allowed the Porsche into the class lead. Just two minutes later, the Ferrari was shown in the barriers on the entrance of the Wellington Straight.

Right rear damage to the Ferrari would end their race early putting pay to any chances of extending the class points lead.

From then on it was the Cunningham Porsche that led comfortably from the RNR Ferrari. Ultimately, gearbox issues hampered the second Ferrari in its opening stint but after the scheduled pitstop, the issues were resolved, and Bradley Ellis was installed behind the wheel.

From then on Ellis was unstoppable as he breezed past the Porsche and set about building what ended up being a 90-second buffer at the flag. Still it was a great result for the older Porsche.

James / Jake Little looked set for a dominant display in Class D. A blinding start saw the Cayman 718 GT4 Clubsport move from 14th up to 7th in just two laps. James Little steered his way through the spray right until a water pump belt failed and ended his race just moments later. 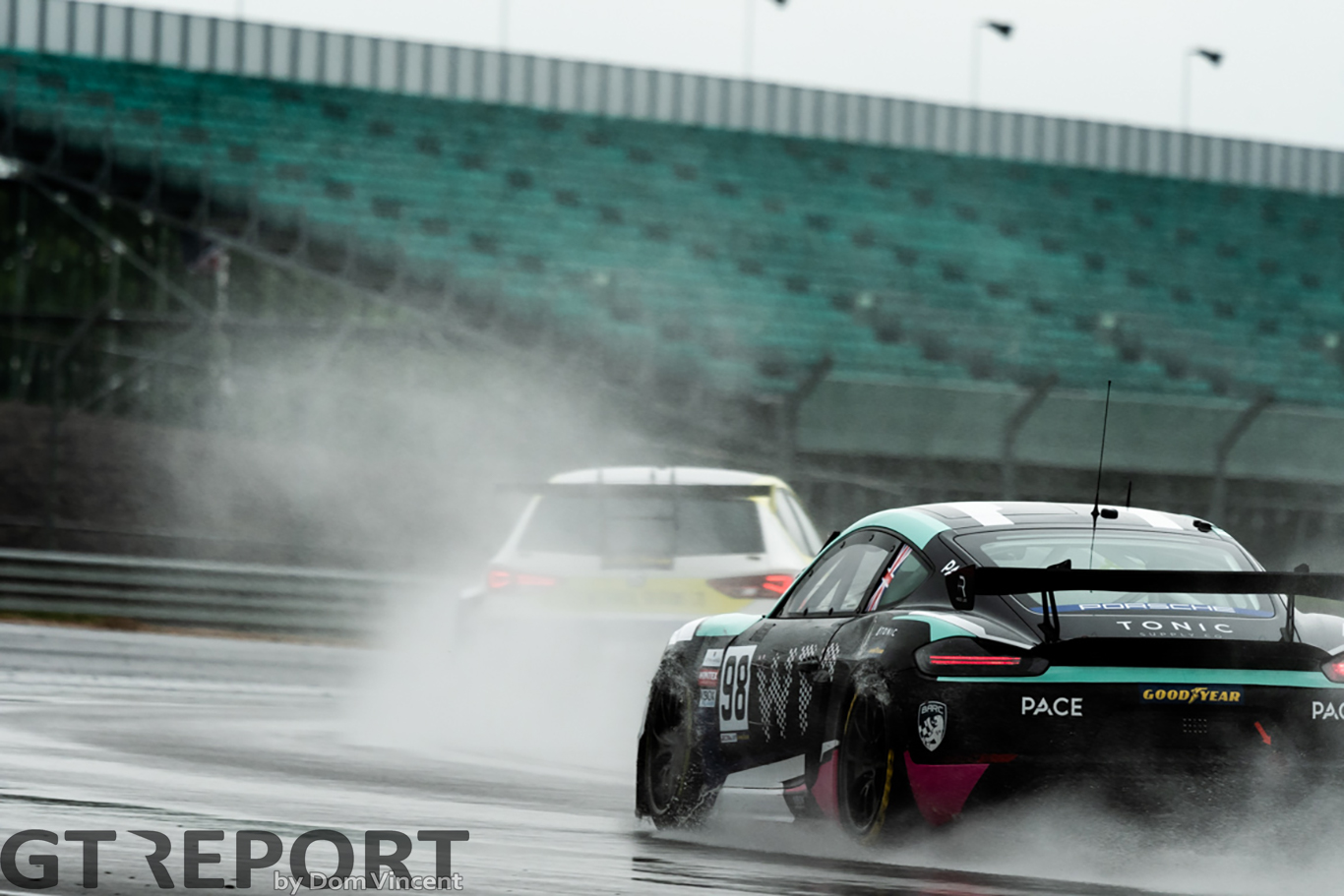 With the early favourite out of the running the sole remaining Cayman GT4 of Ian Gough / Euan Hankey to wrap up Class D honours. However, being an invitational entry they are ineligible for class points.

EDF Motorsports put aside their recent reliability woes to dominate just as they did on the last visit to Silverstone. A 1m 10s margin of victory truely showed how dominant the new Cupra TCR has been when running uninterrupted. 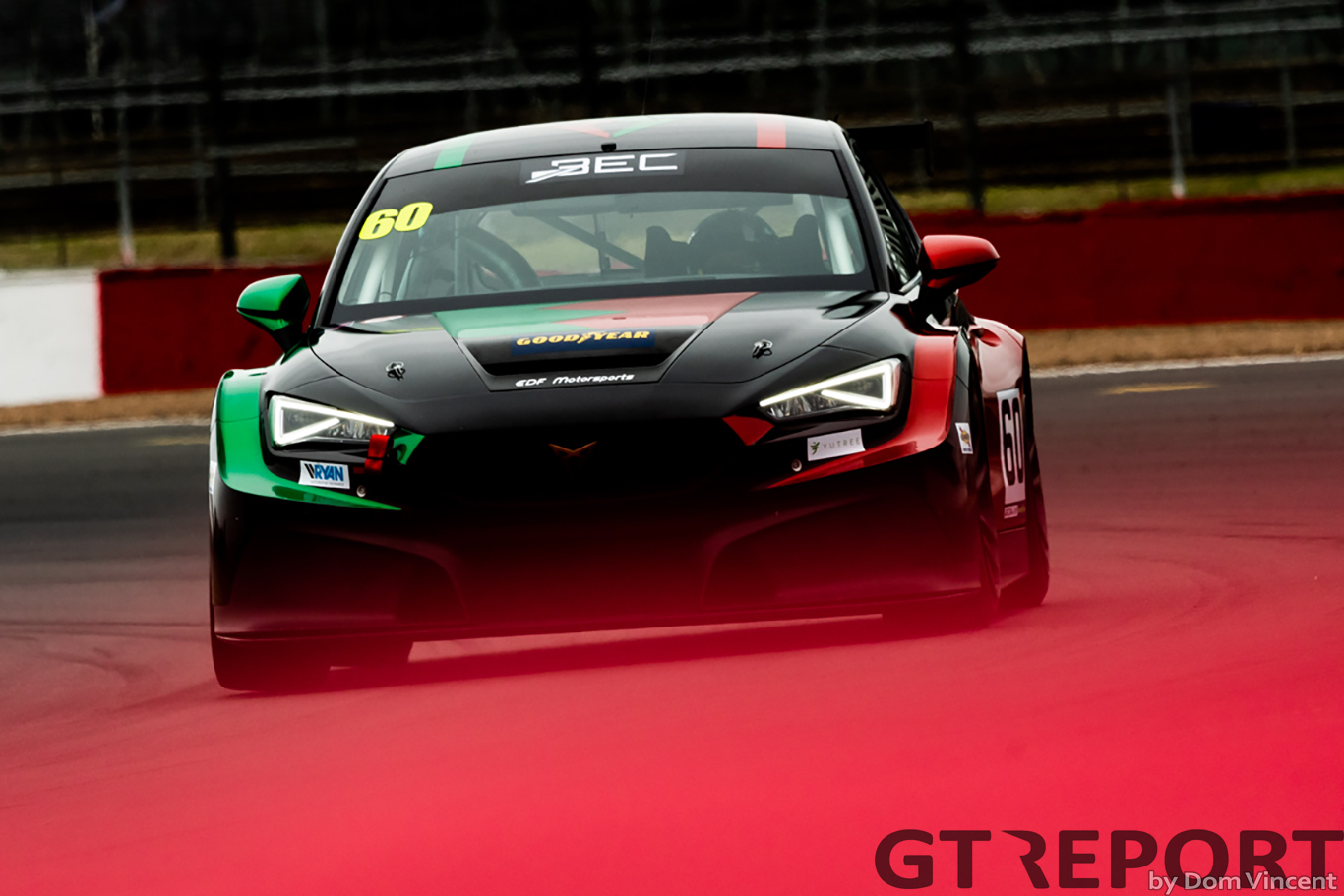 CTR-Alfatune came home second despite their fair share of reliability issues. Their older generation Cupra suffered turbo issues during qualifying whilst limp mode engaged during the race, costing them valuable time. But luckily, they still held onto second position, their best result of the season.

Dragon Sport by Amigo rounded out the top three also with their best result of the season. A third place in what has been a year plagued by poor reliability from their Opel Astra TCR.

RVR Motorsport made up for their Snetterton misfortune by taking a comfortable victory at Silverstone. Mark / Jake McAleer brought the car home in one piece and even finished on the same lap as the brand new Sheard Autosport Audi RS3 TCR. 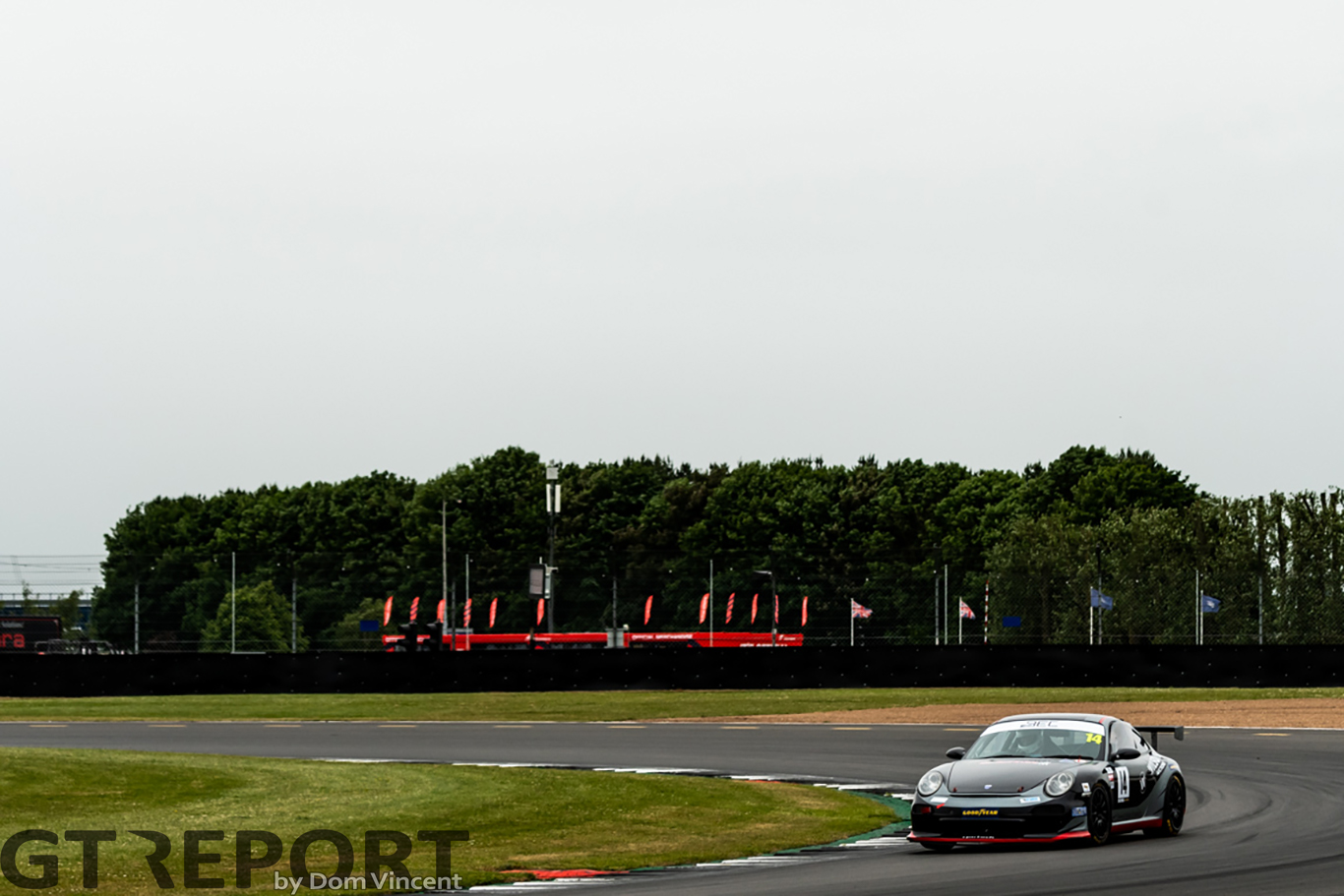 Class rivals Newbarn Racing endured yet another retirement just five laps into the race. A disappointing showing after their first victory last time out. 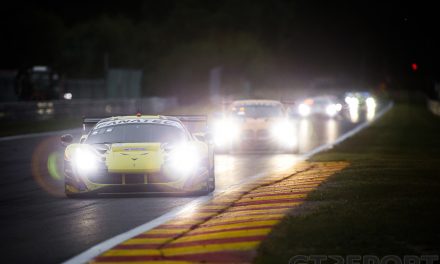