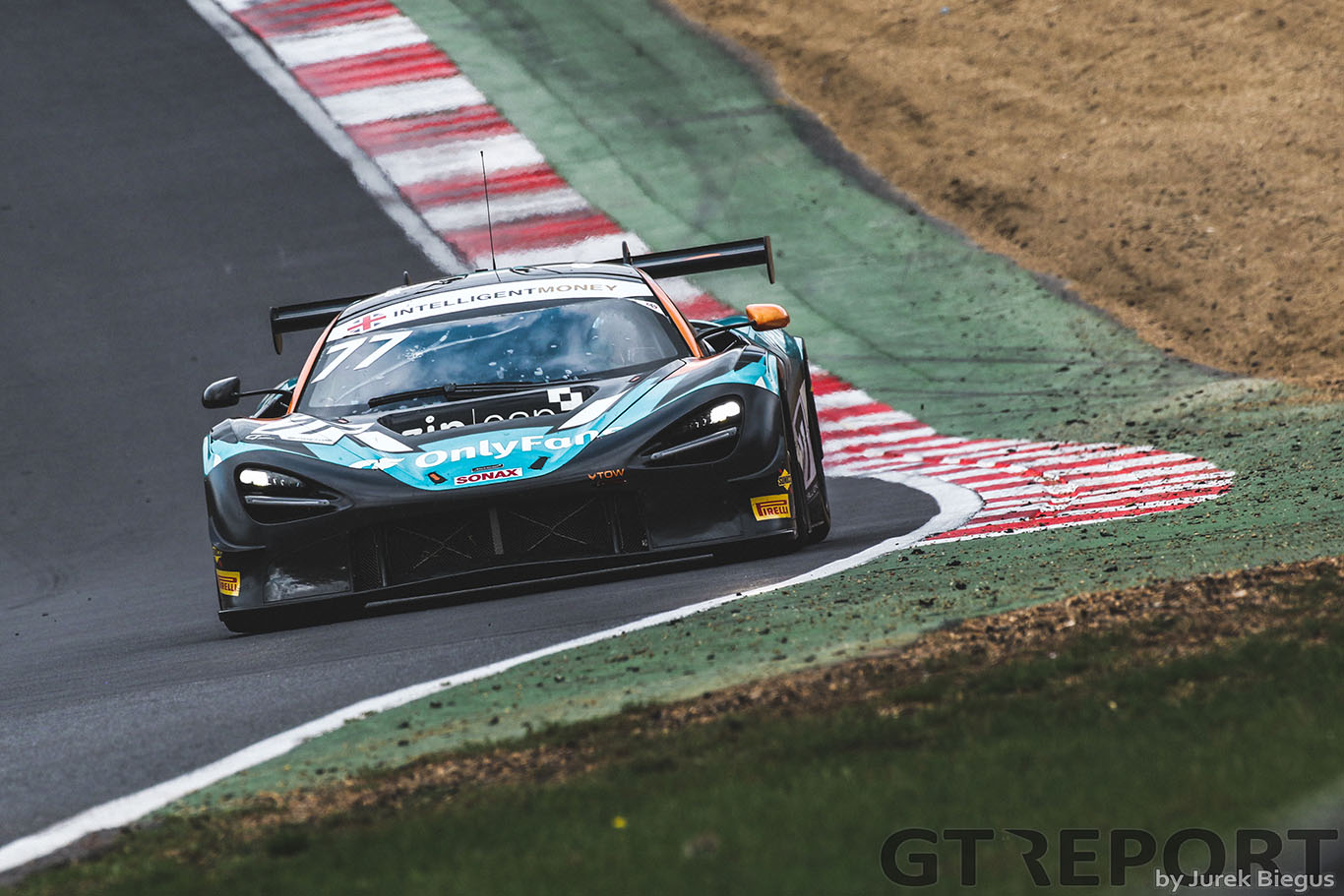 The Intelligent Money British GT Championship put on what was probably the best race of the season with a Brands Hatch encounter filled with drama, with Enduro Motorsport taking victory after fortune fell its way on the penultimate lap of the penultimate round of 2022.

Newbridge Motorsport took a significant step towards the GT4 title with a remarkable drive for Matt Topham and Darren Turner, who benefitted from success penalties and numerous safety cars to take a hard-fought win in the secondary class.

The lead category proved to be a thrilling contest right up until the final lap, with the win potentially going to any number of cars after a dramatic two hours of racing around the Kent circuit.

At the start, 2 Seas Motorsport’s James Cottingham made a solid start, shadowed by Enduro’s Morgan Tillbrook, whilst the biggest mover proved to be Team ABBA Racing’s Richard Neary who pulled off one of his typical robust opening laps to muscle himself up from sixth to third by the second corner of Druids. 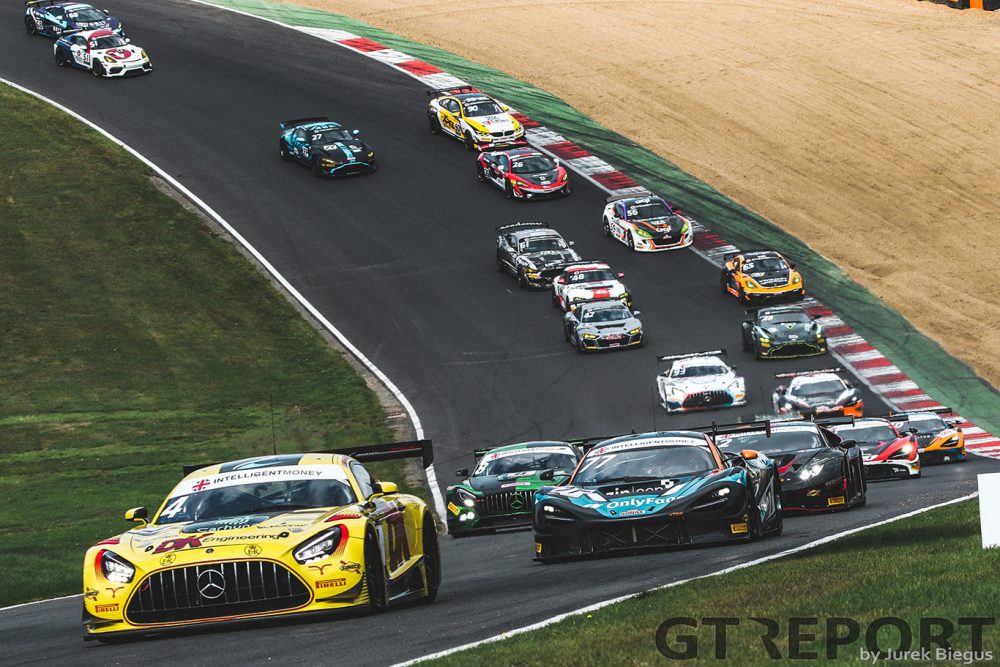 The race settled into a bit of a calm period for the first 15 minutes, until that was disturbed by the first of three safety car interruptions, this one to clear the Motus One Racing Mercedes-AMG GT4 which ground to a halt on the outside of Druids and in the firing line of potential traffic.

On the restart, Cottingham and Tillbrook showed the field a clean pair of heels, benefitting from Neary losing time as the Valluga Racing Porsche Cayman squirrelled into the gravel and held him up – allowing Alex Malykhin to regain his third spot. However, the Redline Racing driver was slapped with a drive-through penalty for making the move before the start/finish line.

It was only 10 minutes after the race went green again, that another neutralisation had to be called for. Adam Balon, in the Barwell Motorsport Lamborghini Huracán GT3 Evo, was fending off a hard-charging RAM Racing Mercedes-AMG GT3 driven by Ian Loggie, when the latter tagged Balon’s rear-left trying to squeeze up his inside on the way into Surtees. The pair spun and in avoidance, Nick Halstead planted his Fox Motorsport McLaren 720S GT3 straight into the gravel.

That slight moment of chaos had allowed Henry Dawes to move up to fourth in his debut race in the Century Motorsport BMW M4 GT3 and moved Nick Jones up to fifth in the Team Parker Racing Porsche 911 GT3 R – directly ahead of Loggie. 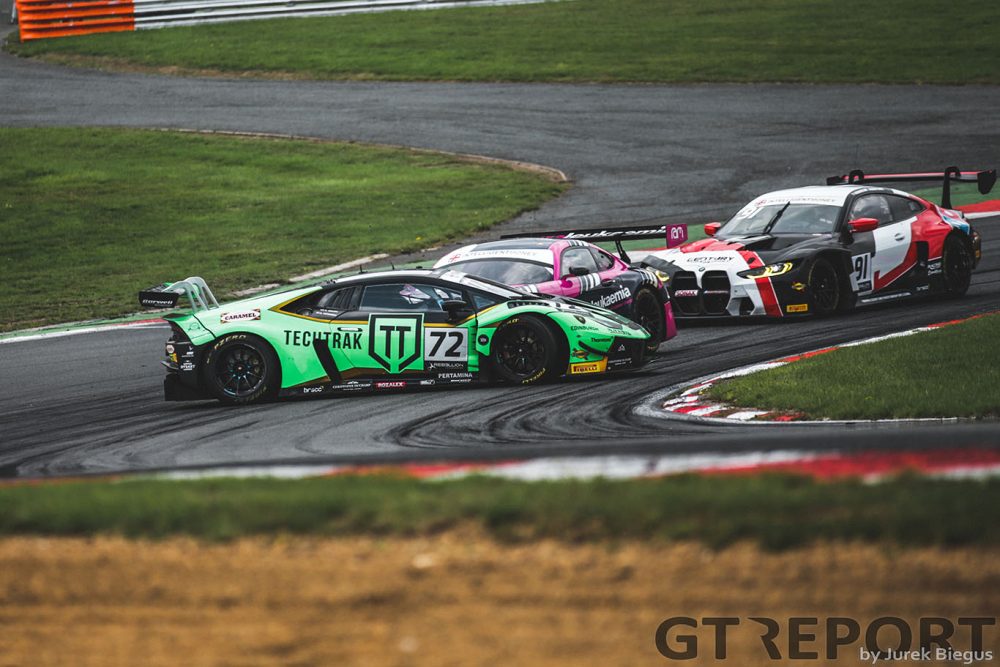 On the restart, Jones tried his best to fend off the championship leader and managed it for a lap before running too wide at Paddock Hill Bend and allowing the Scotsman to power ahead.

Again, a theme for the opening hour of the race, not much action could take place before the safety car was needed again. A clumsy lunge from Tom Edgar in the Toyota Gazoo Racing UK Supra on Moh Ritson’s Paddock Motorsport McLaren 570S GT4 caused the pair to make contact at Sheene’s and gave Ritson what turned out to be a slow puncture. A lap later, and the tyre completely gave way, and in an effort to try and limp the car back to the pits, Ritson ended up in the gravel at Stirlings.

On what proved to be the final restart of the race, Cottingham once again opened up a gap to the pack behind, helped by Neary attempting to go round the outside of Tillbrook at Druids but – despite showing better speed – the dirtier outside line didn’t offer up as much grip and allowed the Enduro racer to keep his McLaren 720S GT3 in second.

That was about it for the action until the pit window opened. With success penalties confirmed just this weekend after the Spa result was confirmed by the National Court after technical irregularities with the McLaren GT3s, Cottingham had to serve an extra 15 seconds in the pits, pushing them out of the lead thanks to the field coming in pretty much nose-to-tail after the regular safety cars. 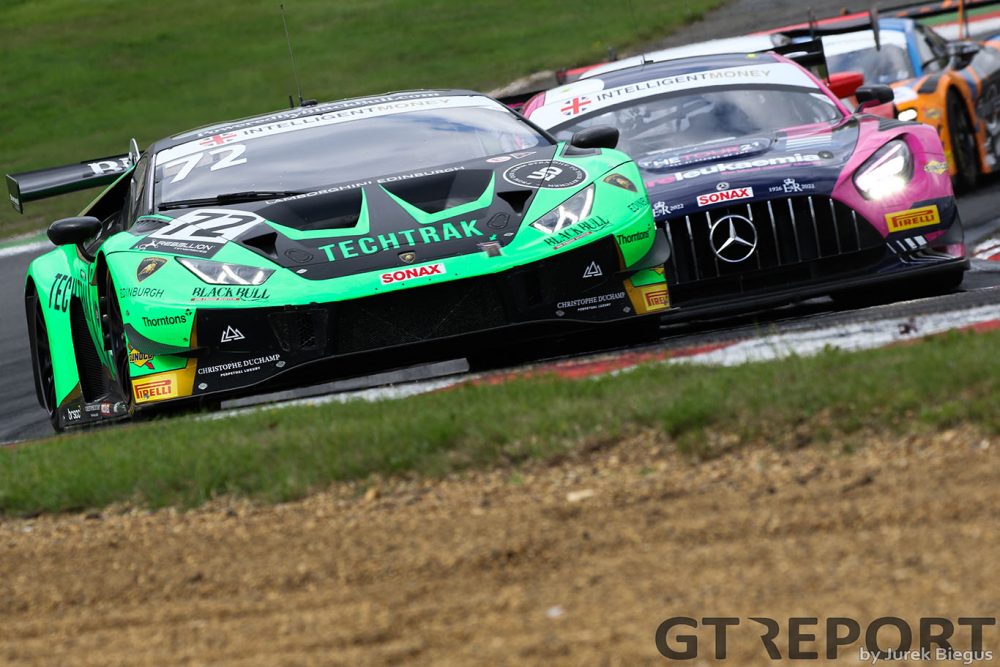 A marginally faster stop allowed Sam Neary to take over from father Richard in the lead and with a slight advantage over Marcus Clutton, taking over the McLaren from Tillbrook.

The pair were never separated by more than two seconds, as they diced their way through traffic. Despite the pressure from Clutton, Neary stayed solid in the lead – pulling off a particularly remarkable overtake on two back-marking GT4s as he scythed through the middle of them down the short Cooper Straight. With Clutton marginally delayed by the squabbling pair through Surtees, it appeared that the younger Neary had done enough to seal Brands Hatch victory.

It wasn’t to be, however, as on the penultimate tour he slowed dramatically coming down the start/finish straight, eventually limping the car round to the back entrance of the pitlane where the car was immediately retired.

That handed Clutton the lead, but not a solid shot of victory as Sandy Mitchell – recovering splendidly after Balon’s earlier misfortune – had benefitted from Clutton and Neary squabbling to squeeze down the advantage to just a second. He didn’t, though, have enough time in hand to deny Enduro from taking the chequered flag first. 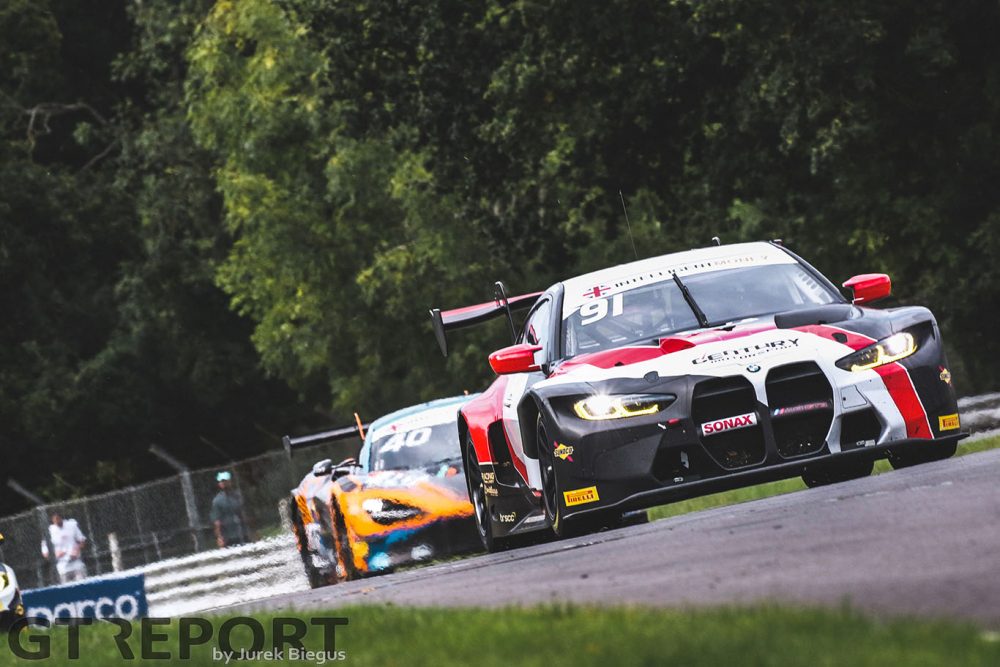 Enduro taking the win, and Ian Loggie only taking sixth alongside Callum Macleod – after the latter battled through steering issues following Loggie’s earlier contact with Balon – means the title will go down to a now-traditional #DoningtonDecider in October, but Loggie should still have enough points in hand to take the title with a solid finish. Stranger things have happened in this championship, mind you…

Back at Brands and rounding out the podium was the Century Motorsport BMW, Henry Dawes taking a remarkable third on his British GT debut thanks to an assured second stint from Alexander Sims, making his return to the championship for the first time since 2016. That is also far and away the team’s best result of the season, with a crew that is able to take the car by the scruff of the neck and drive it properly.

Fourth went to Cottingham and Lewis Williamson, the latter unable to counter-act the success penalty given to the Mercedes-AMG GT3 crew, finishing 1.145sec down on the BMW.

Euan Hankey and Mia Flewitt took a well-earned fifth for 7TSix, whilst Macleod held onto take sixth as mentioned above – fending off Scott Malvern in the closing stint who was all over the pink machine in the last 45 minutes of the race.

Two off-track moments for Simon Watts relegated the Team Rocket RJN McLaren to eighth, with the Nearys completing enough of the race to be classified in ninth despite not taking the flag. After his excursion into the gravel, Nick Halstead and Jamie Stanley rounded out the top 10. 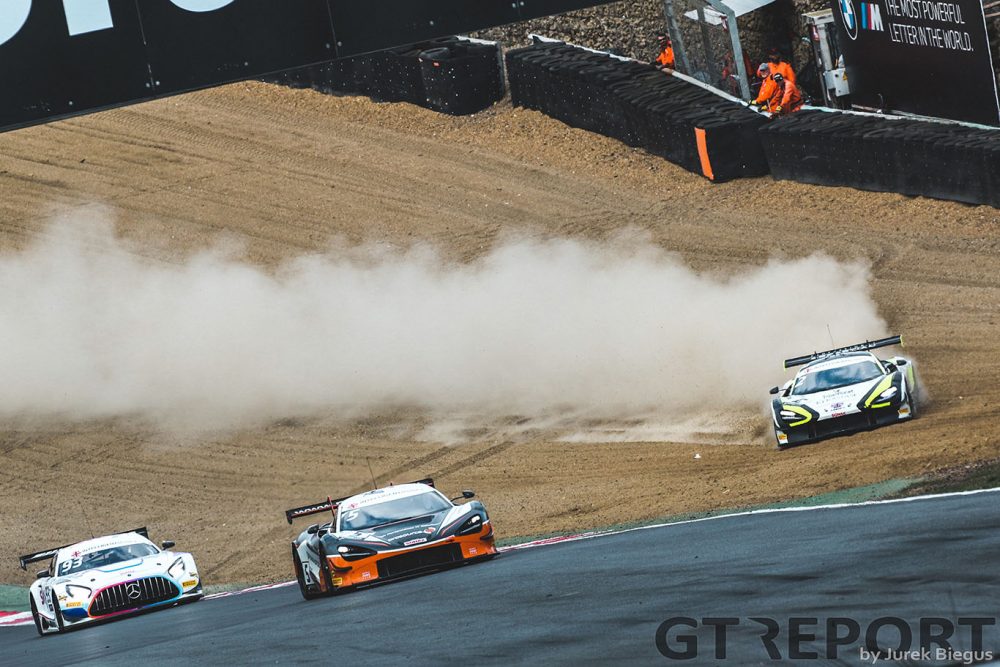 Action and drama were two of the key watchwords in the GT4 category with a race that proved comfortable for whoever was leading, but absolutely chaotic for any of the teams battling for the podium.

Having taken pole position the day before, Richard Williams built up something of a comfortable lead for the opening hour as the Steller Motorsport Audi R8 LMS GT4 proved to be the strongest car on-track in the early stages. He benefitted from an unfolding skirmish behind for second, third and fourth.

Jamie Orton was initially in second, in the Team Parker Racing Porsche 718 Cayman GT4 RS ClubSport, but was under pressure from a train of cars including Marco Signoretti’s Ford Mustang, Tom Edgar in the Speedworks Supra, and Ritson in the Paddock McLaren.

With action intense, the first of the challengers to fall by the wayside was Signoretti. Possibly running over some debris from Andrew Howard’s Sky Tempesta Racing Mercedes-AMG GT3 – which was rear-ended – the Pirelli tyre punctured and a flailing piece of rubber took out one of the Mustang’s dampers. Despite great work from the Academy Motorsport crew to repair the damage, the car lost almost a dozen laps. 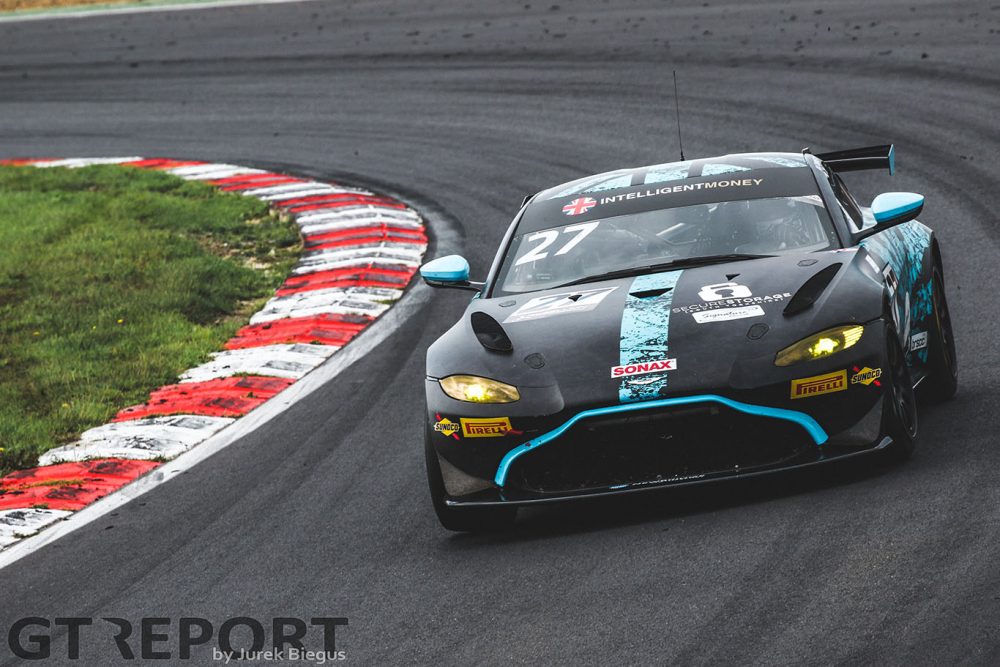 Back up the front, Orton appeared to not quite have the pace of the cars around him, and was proving something of a cork in the bottle. It was his relative lack of pace that caused the real flashpoint of the first hour as, as described above, Edgar saw a slight gap in Ritson’s armour going into the right-hander of Sheene’s and dived for the gap. The pair made contact and Ritson was sent skittering across the gravel, eventually retiring after getting stuck in the gravel a lap later. The stop/go penalty handed to Edgar also dropped he and team-mate Jordan Collard to sixth at the end of the race.

The next set of major changes happened at the mandatory stop. With Matt Topham and Darren Turner being a Pro/Am crew, they were one of the only leading entries not to have to serve an extra 20 seconds in the pits, as the Silver Cup crews have to observe, and with the safety car not allowing any field spread, Turner took over the Newbridge Motorsport Aston Martin with just over 20 seconds in hand on Sennan Fielding – who replaced Williams in the Audi.

Fielding made handy work of slicing down the gap, but his momentum was slightly punctured after he made side-by-side contact with Marcus Clutton as the latter was trying to lap him. Going through Westfield Bend, Fielding yielded for Sam Neary, but possibly didn’t expect Clutton to close so quickly and took the racing line through the corner, causing him to have minor contact with the McLaren and a quick run over the grass. 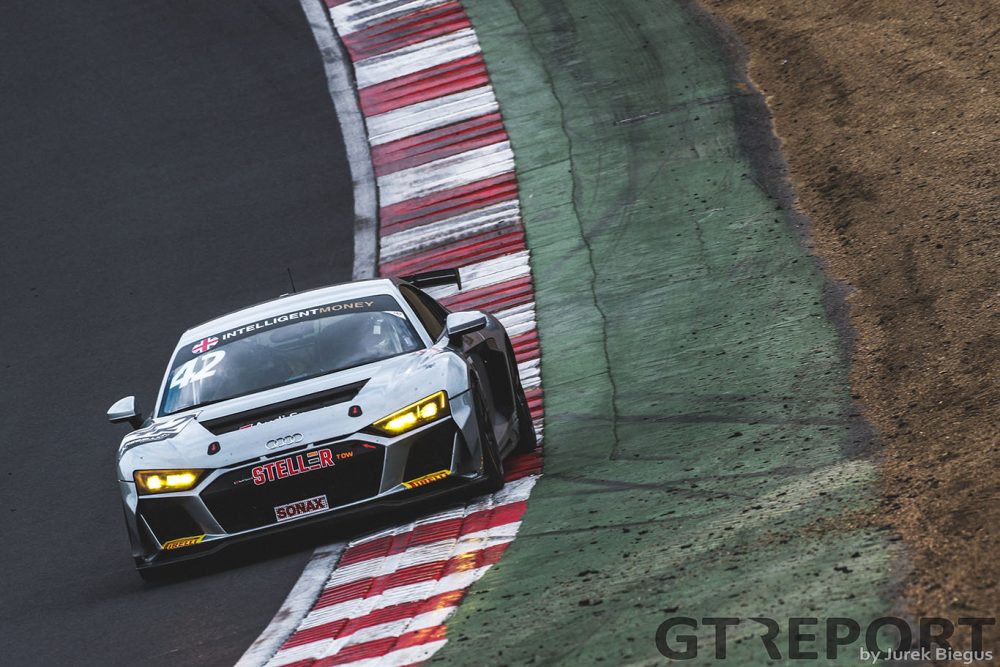 Despite no lasting harm being done, Fielding ran out of time to try and really close the gap – taking second (1st in the Silver Cup), 5.2sec down on Turner after a superlative drive from the long-time Aston factory driver.

After a day of defending from all threats, Orton and Seb Hopkins took third in class after a faultless drive from the pair. Fourth overall, and third in Silver Cup went to Jamie Day and Josh Miller in the R Racing Vantage, the pair not putting a foot wrong either, with Day gaining a position late-on after a great overtake on Team BRIT’s Bobby Trundley. The latter benefitted too from being a Pro/Am line-up alongside Aaron Morgan to shoot up to fifth at the flag and second in class.

The final round of the 2022 Intelligent Money British GT Championship season is of course the #DoningtonDecider at Donington Park, with the two-hour race on Sunday 16 October. 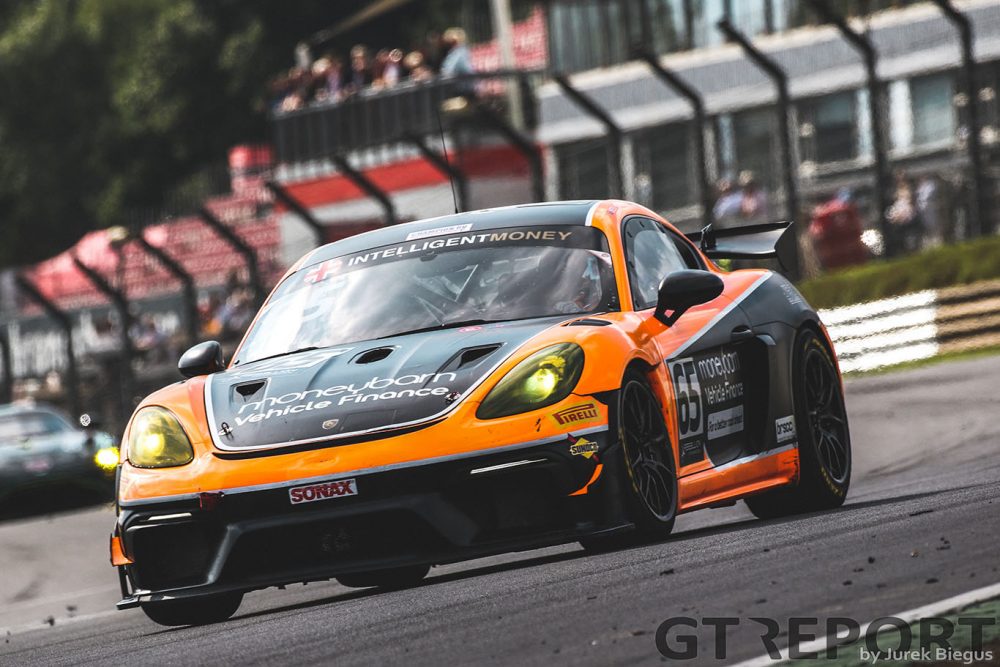 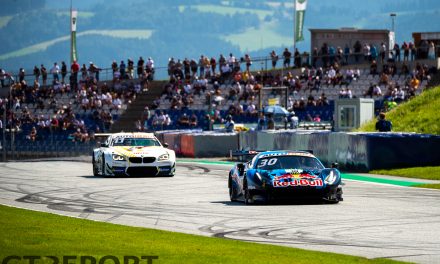 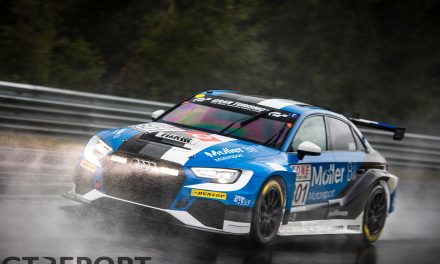 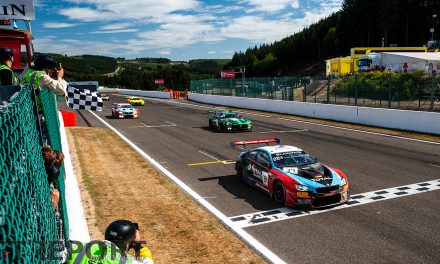 In his own words: How Christian Krognes won the Spa 24 Hours