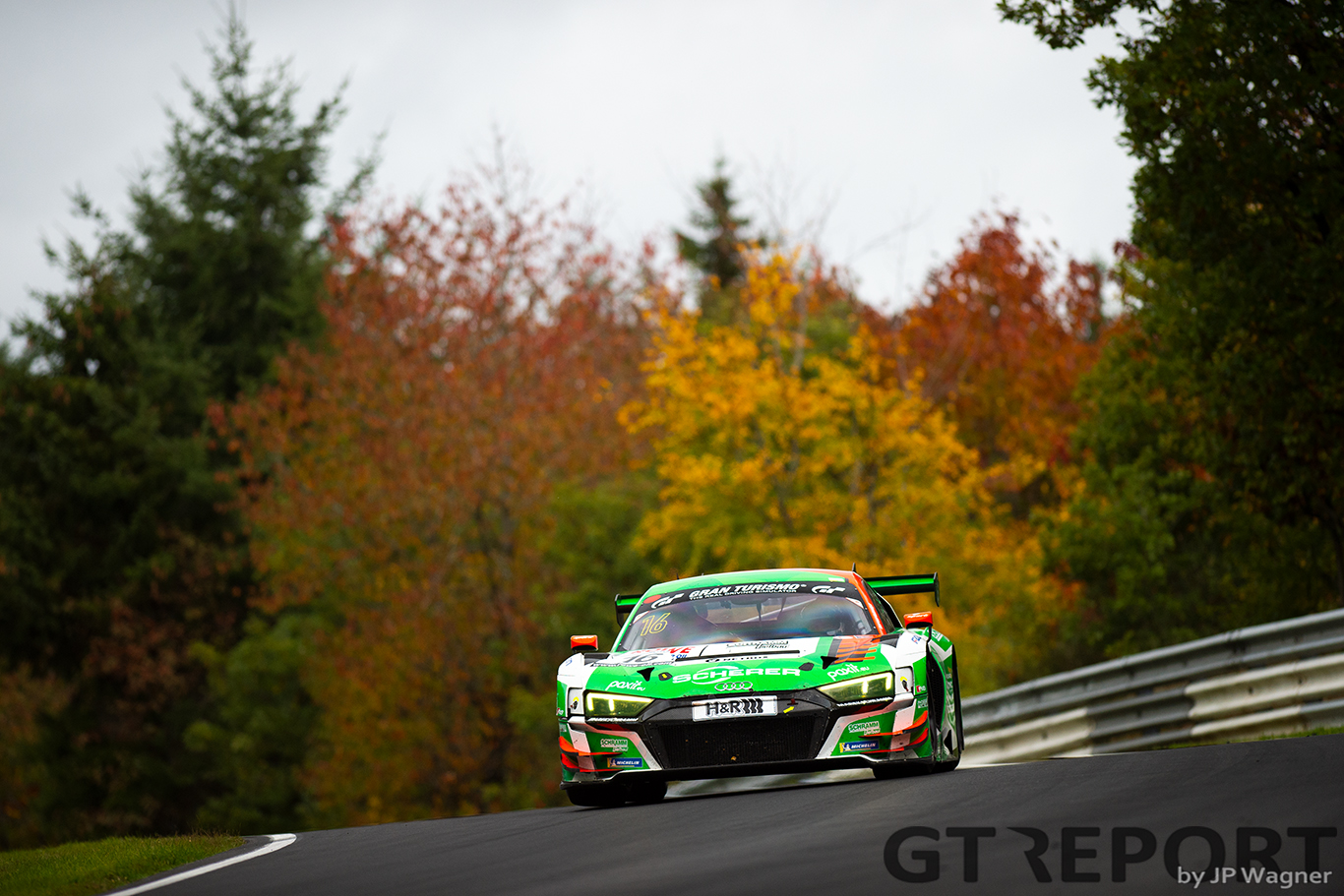 Kuba Giermaziak strengthened his claim on the 2022 VLN Nürburgring Endurance Series (NLS) Speed Trophy title with a comprehensive win in NLS8 this afternoon. Aided by driving partner Kelvin van der Linde in the #16 Scherer Sport Team Phoenix Audi R8 LMS GT3, they took the lead at the half point with the only pressure coming from their teammates Frank Stippler and Vincent Kolb in the #5 Scherer Sport Team Phoenix Audi for the team’s second 1-2 victory in a row.

Giermaziak crossed the line with some 30 seconds in hand over Stippler in the sister Audi with third place going to the #11 Schnitzelalm Racing Mercedes-AMG GT3 of Kenneth Heyer, Marcel Marchewicz and Marek Böckmann, their best finish so far in the NLS. 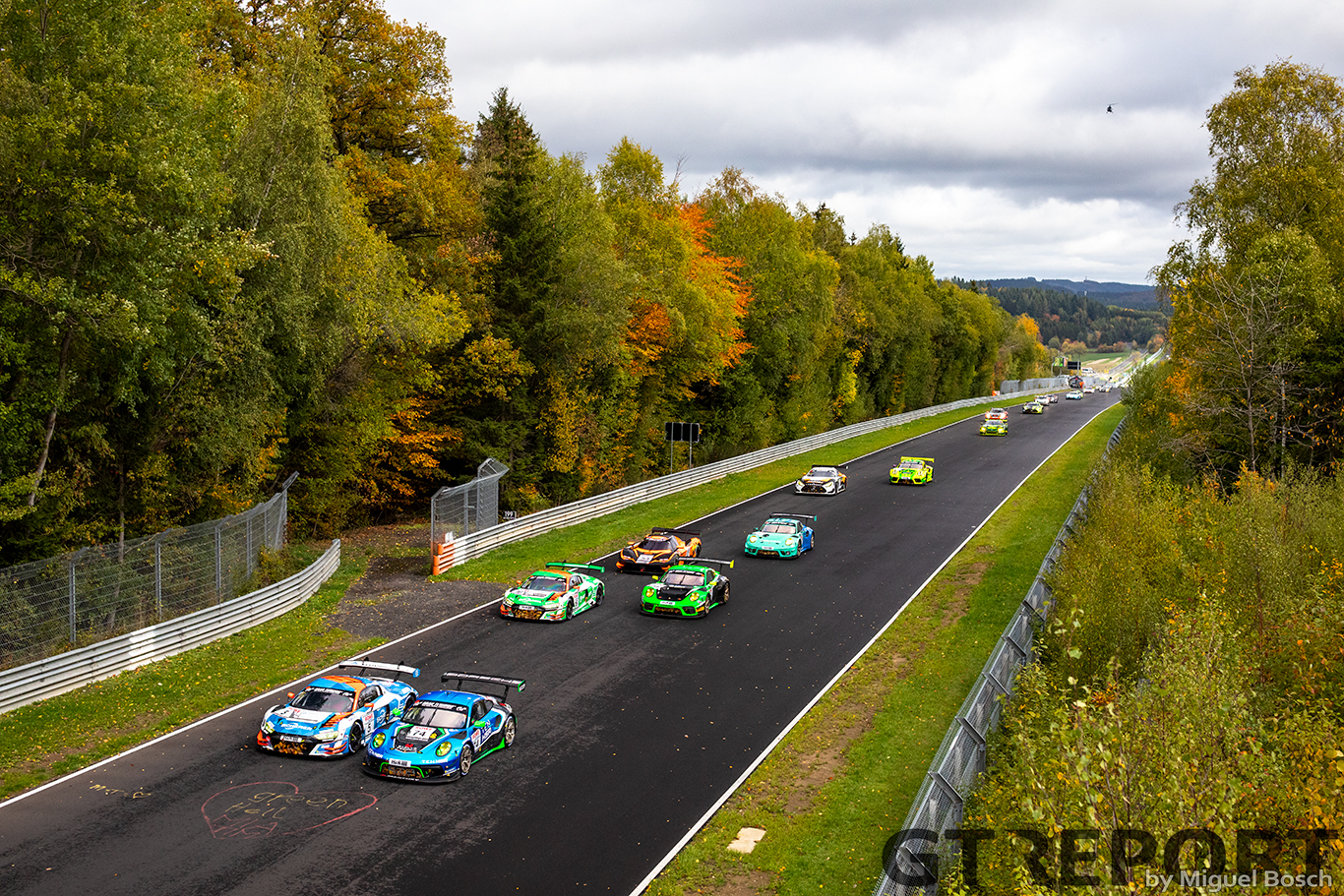 Starting from third on the grid, Kelvin van der Linde took the start in the #16 Audi but it was the #30 Dinamic Motorsport Porsche 991.2 GT3R of Alessio Picariello starting from fourth place which took the lead into the first turn relegating pole starting Stippler to fifth. Picariello was immediately under pressure from Tim Heinneman in the #3 Falken Motorsports Porsche 991.2 GT3R who took the lead from Picariello into the second turn.

Seemingly not aware that this was a 4-hour race, the battle at the front changed again a quarter of the way around the circuit as Picariello retook the lead from Heinneman whilst the two Phoenix Audis waited for their moment behind the fighting Porsches. The opportunity came at the end of the first lap as coming down the Döttinger Höhe for the first time, Stippler was able to creep up on Van der Linde running in third and Tim Heinemann’s #3 Falken Motorsports Porsche in second. With the two squabbling as the end of the straight approached, Stippler pulled off a breathtaking move into Tiergarten. Diving to drivers left as Van der Linde went to the right, the two Audis drove either side of the Porsche with Stippler jumping two places to second and Van der Linde taking third ahead of Heinemann. 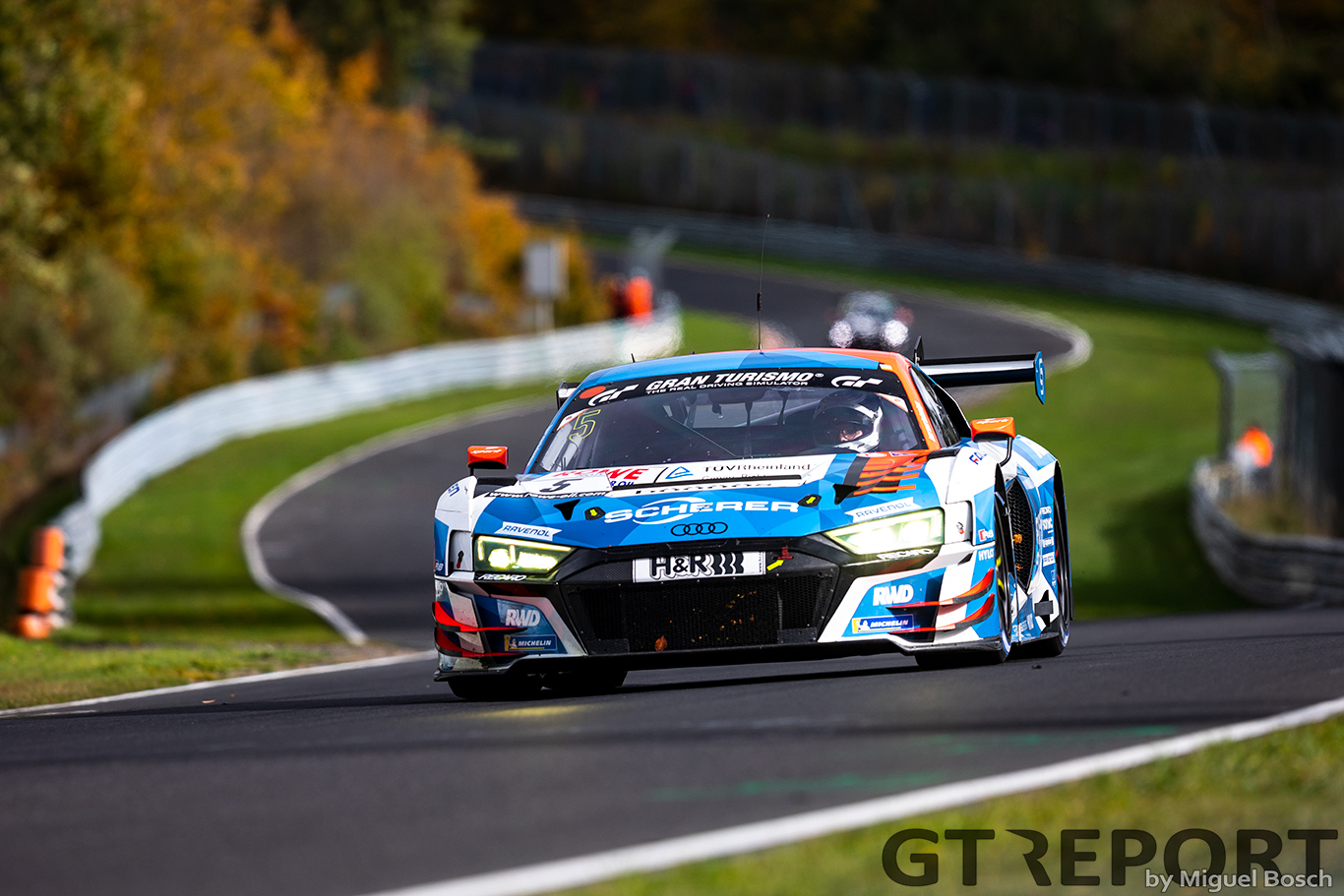 Stippler went on to take the lead on the third lap with a move that started at Tiergarten when a robust defence from Picariello saw Stippler onto the grass. Exiting the Mercedes Arena, Stippler took his opportunity and with an equally robust move took the lead which then delayed Picariello enough for Van der Linde to take second at the cut through.

Elsewhere, Thomas Preining had to pit at the end of the first lap to clear grass out of the grill of the #911 Manthey Racing Porsche 991.2 GT3R which dropped him well down the order before eventually retiring. The second Falken Motorsports Porsche, the #4 2023 model Porsche 992 GT3R of Julien Andlauer and Klaus Bachler, also retired early on, with Bachler stopping the car after 20 minutes at the Sabine Schmitz Kurve with cooling problems due to the many leaves around the Nordschleife. 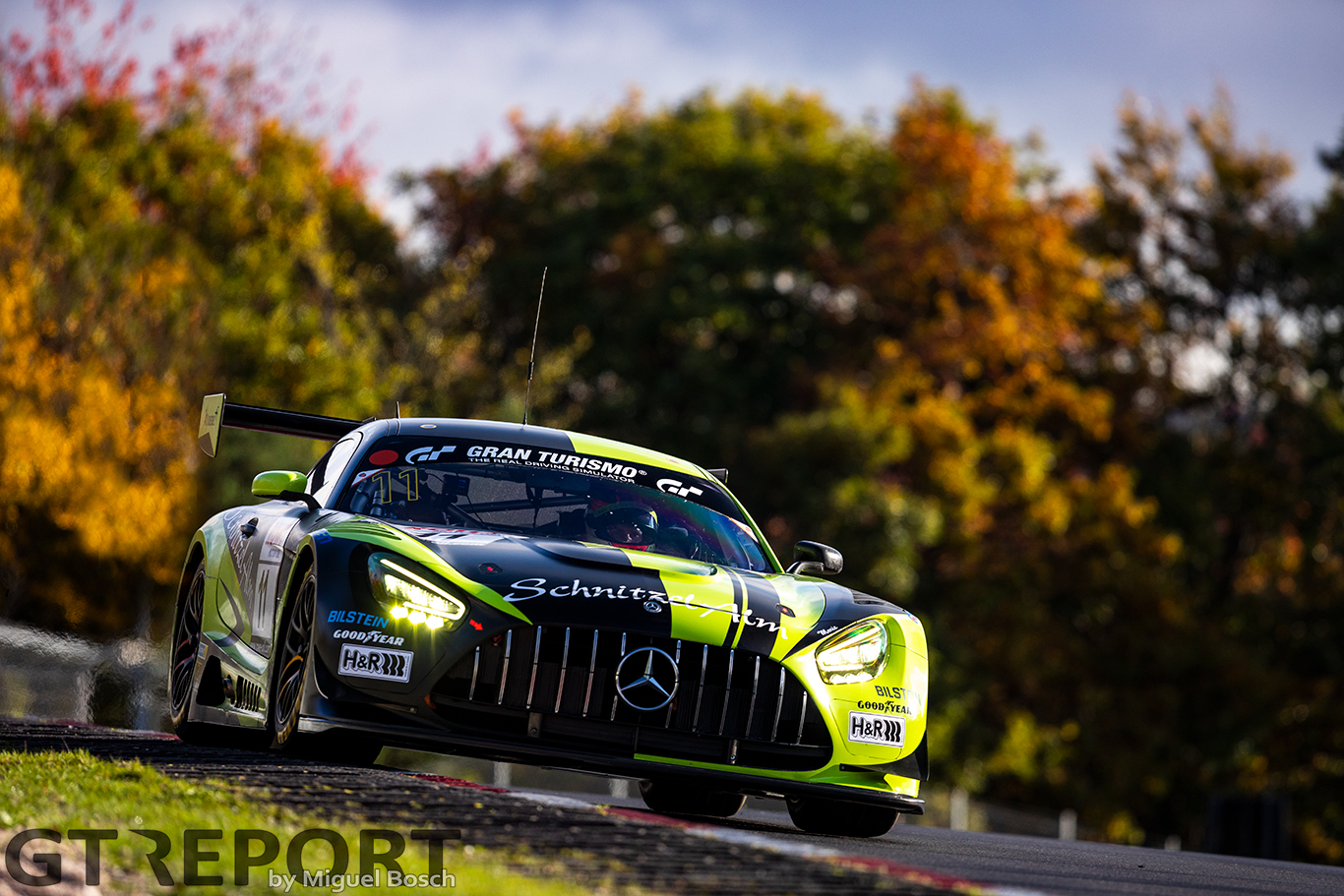 Starting from pole in the SP9/GT3 Pro-Am class, the #17 Aston Martin retired on the first lap after Maxime Dumarey had a coming together with another car which left the Aston against the barriers missing its bonnet.

At the halfway point, Van der Linde pitted a lap ahead of the other leaders and handed the car over to Giermaziak who with a solid race pace was able to leapfrog Stippler in the #5 Audi. From that point on Giermaziak never really had to look back. A small rain shower over the Grand Prix loop with an hour remaining caused some minor concern but the track soon dried out and it was an untroubled run to the end for the Pole. 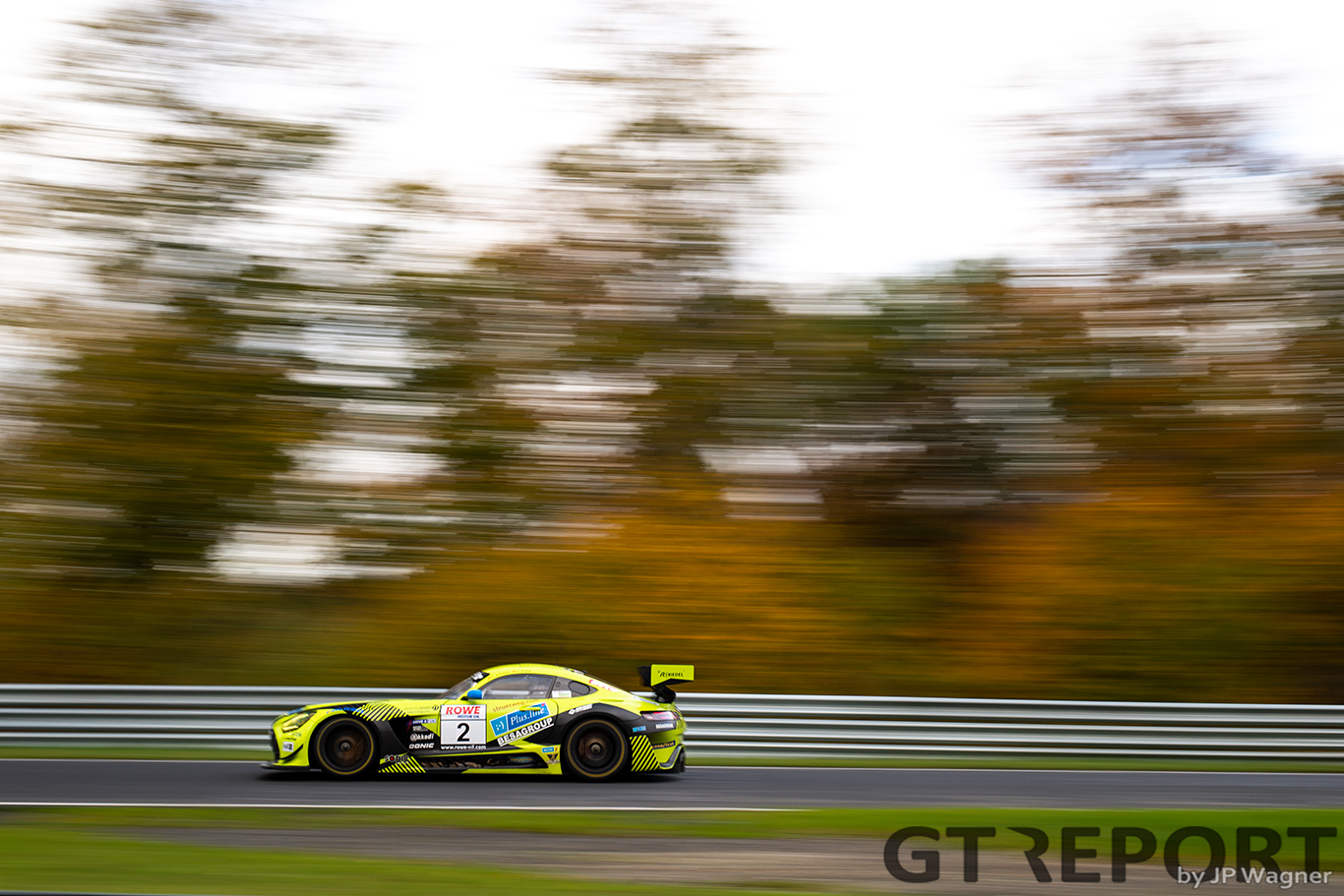 Stippler came home in second place whilst there was massive disappointment for the #3 Falken Motorsports Porsche of Martin Ragginger and Tim Heinemann. Entering the final lap in fourth place and some 10 seconds behind the third-placed #11 Schnitzelalm Racing Mercedes-AMG GT3 of Kenneth Heyer, Ragginger caught and passed Heyer on the Döttinger Höhe, however, a 5-minute penalty for the Porsche after it was caught speeding in a Code 60 zone saw it tumble down the order finishing eventually in seventh.

Fourth place went to the second Schnitzelam Racing Mercedes, the #2 Mercedes-AMG GT3 of Carrie Schreiner and Peter Terting. P5 went to the early leader, the #30 Dinamic Motorsport Porsche 911 GT3 of Alessio Picariello and Adrien De Leener which came home ahead of Jake Dennis in the #34 Walkenhorst Motorsport BMW M4 GT3 he shared with Christian Krognes. 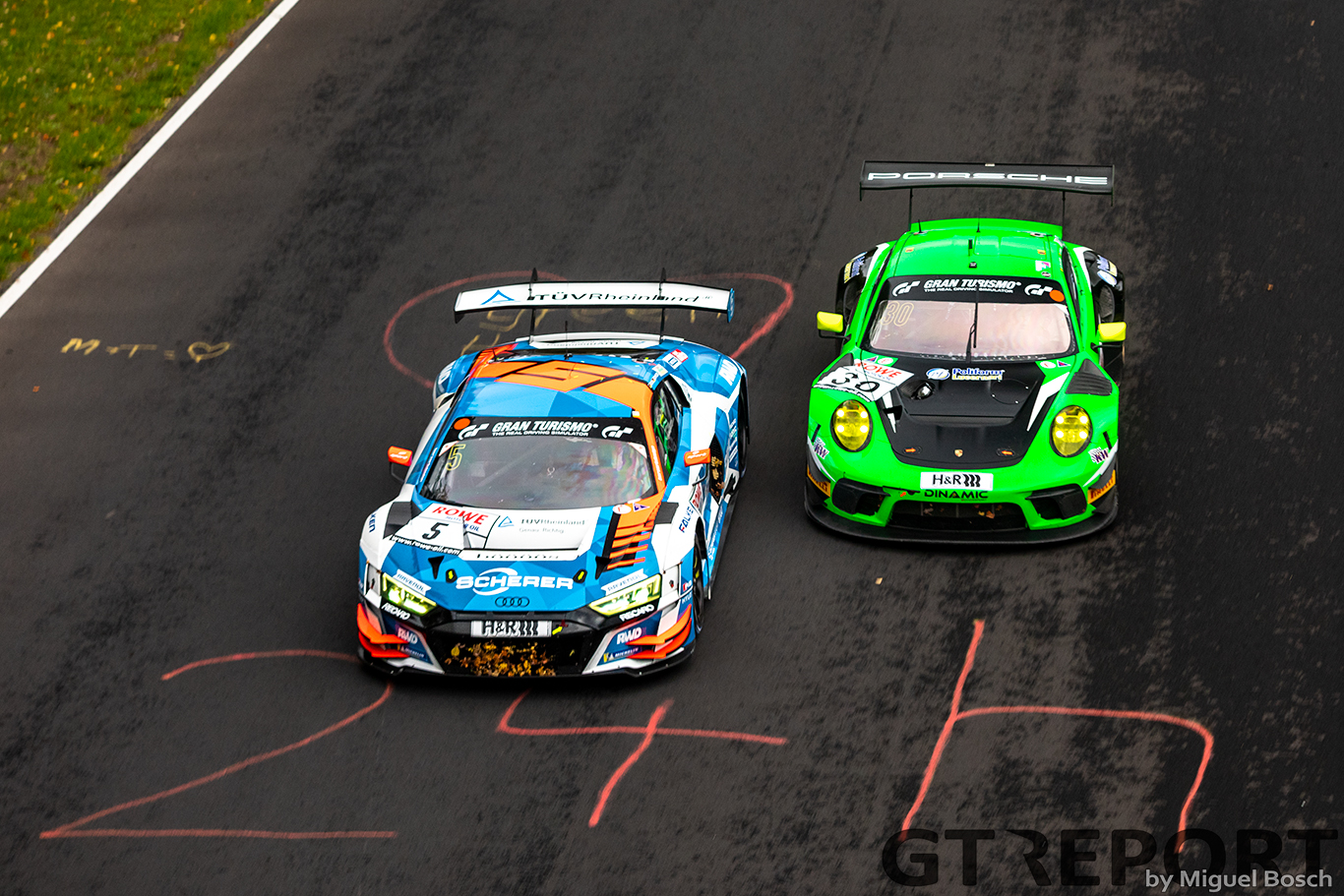 Meanwhile, #500 Adrenalin Motorsport Team Alzner Automotive BMW 330i drivers Daniel Zils, Oskar Sandberg and Sindre Setsaas secured the NLS championship title with one race remaining. The trio took their seventh win of the season in the VT2-R+4WD class. For the team of Matthias Unger it is their fifth championship win in a row.

NLS ends its season on 5 November with the rescheduled NLS2.