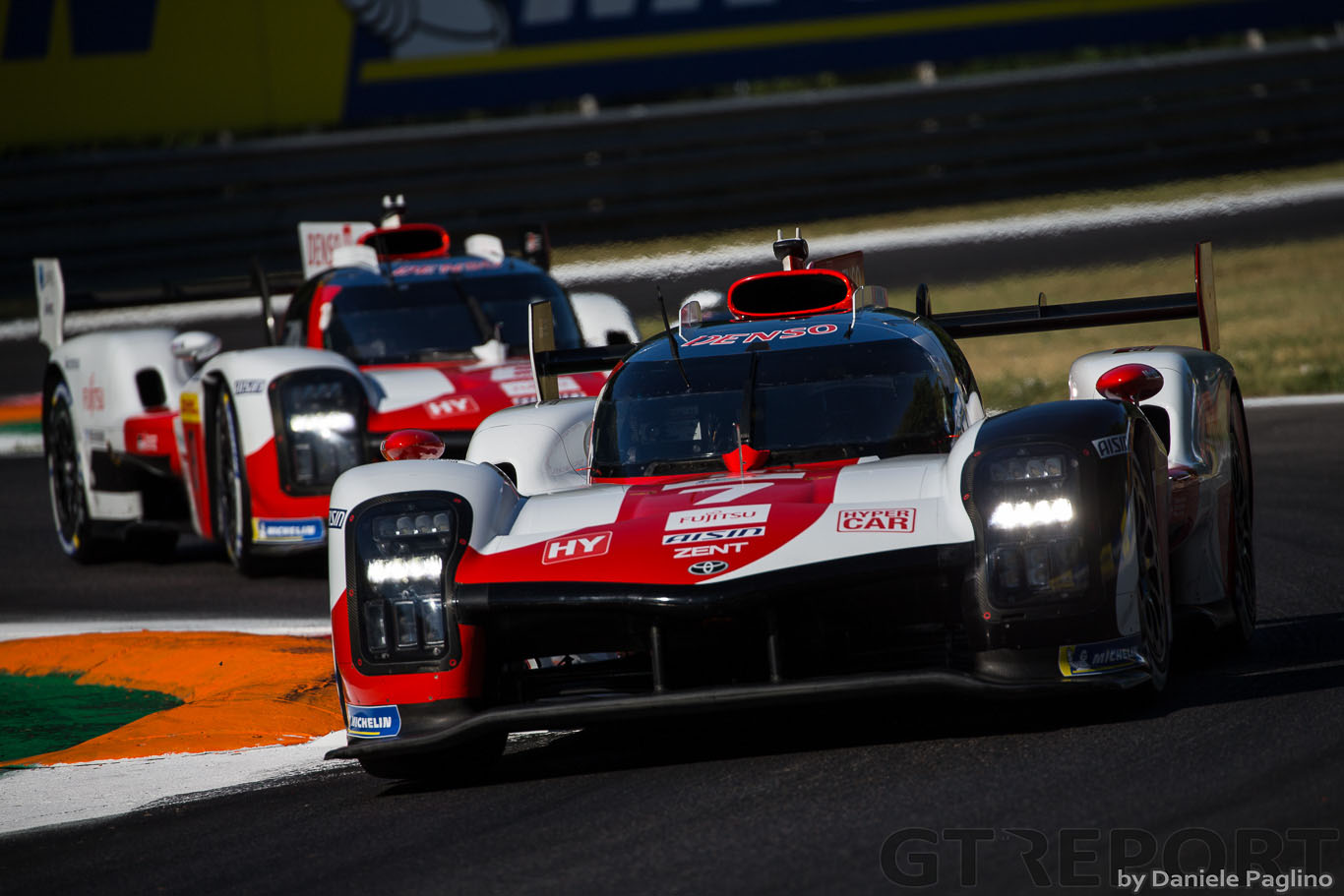 Toyota Gazoo Racing closed out the 2022 FIA World Endurance Championship with another dominant performance at the 8 Hours of Bahrain. Kamui Kobayashi, José María López and Mike Conway in the #7 Toyota GR010 Hybrid cruised to victory with the sister car finishing 45 seconds behind.

Sebastien Buemi started the race from pole position in the #8 Toyota Hypercar with Paul di Resta in the #93 Peugeot 9X8 behind challenging the Frenchman for the lead in the opening minutes of the race.

It quickly became clear that the Peugeots were the only cars able to match the pace of the Toyotas. Di Resta stayed close to the Japanese cars ahead until he had to stop the car with gearbox-related issues at the end of the second hour. The Scot was able to bring the car back to the pits but dropped from the lead lap in the process. After returning to the race, the #93 climbed its way back into the top five before Mikkel Jensen had to retire the car with gearbox failure. 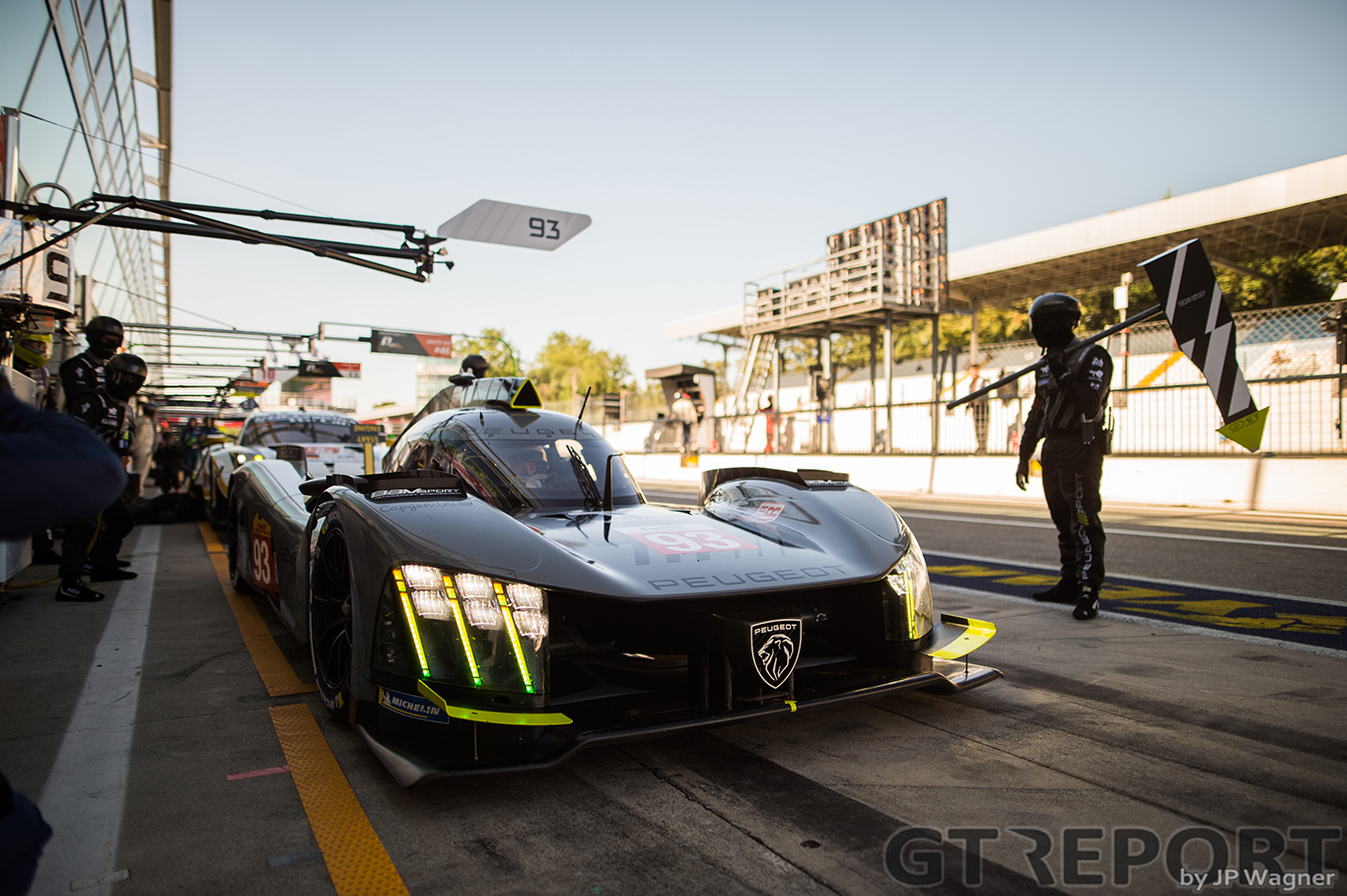 After the #94 Peugeot also hit trouble, the two Toyota were able to extend their advantage on the field with Mike Conway being the fastest man on track taking the lead from teammate Brendon Hartley towards the halfway point of the race and was then able to cruise home to victory.

With the Alpine dropping out of contention, second place was enough for Brendon Hartely, Sebastien Buemi and Ryō Hirakawa to secure the WEC Drivers’ World Endurance Championship.

René Rast, Robin Frijns and Sean Gelael raced to victory in the LMP2 class. In his time aboard the #31 WRT Oreca 07, Rast tracked down and overtook Phil Hanson in the #22 United Autosport Oreca for the lead. From there on, Robin Frijns could extend the lead for the Belgian squad taking the WRT Oreca home for the team’s second consecutive race win.

The #23 United Autosport with Oliver Jarvis, Alex Lynn and Josh Pierson sharing driving duties behind the wheel of the Oreca prototype finished second in class.

Third place for the #38 Jota Oreca 07 of António Félix da Costa, Roberto González and Will Stevens was enough to secure the championship in LMP2.

François Perrodo, Nicklas Nielsen and Alessio Rovera went on to win the LMP2 Pro-Am championship in their #83 AF Corse Oreca. 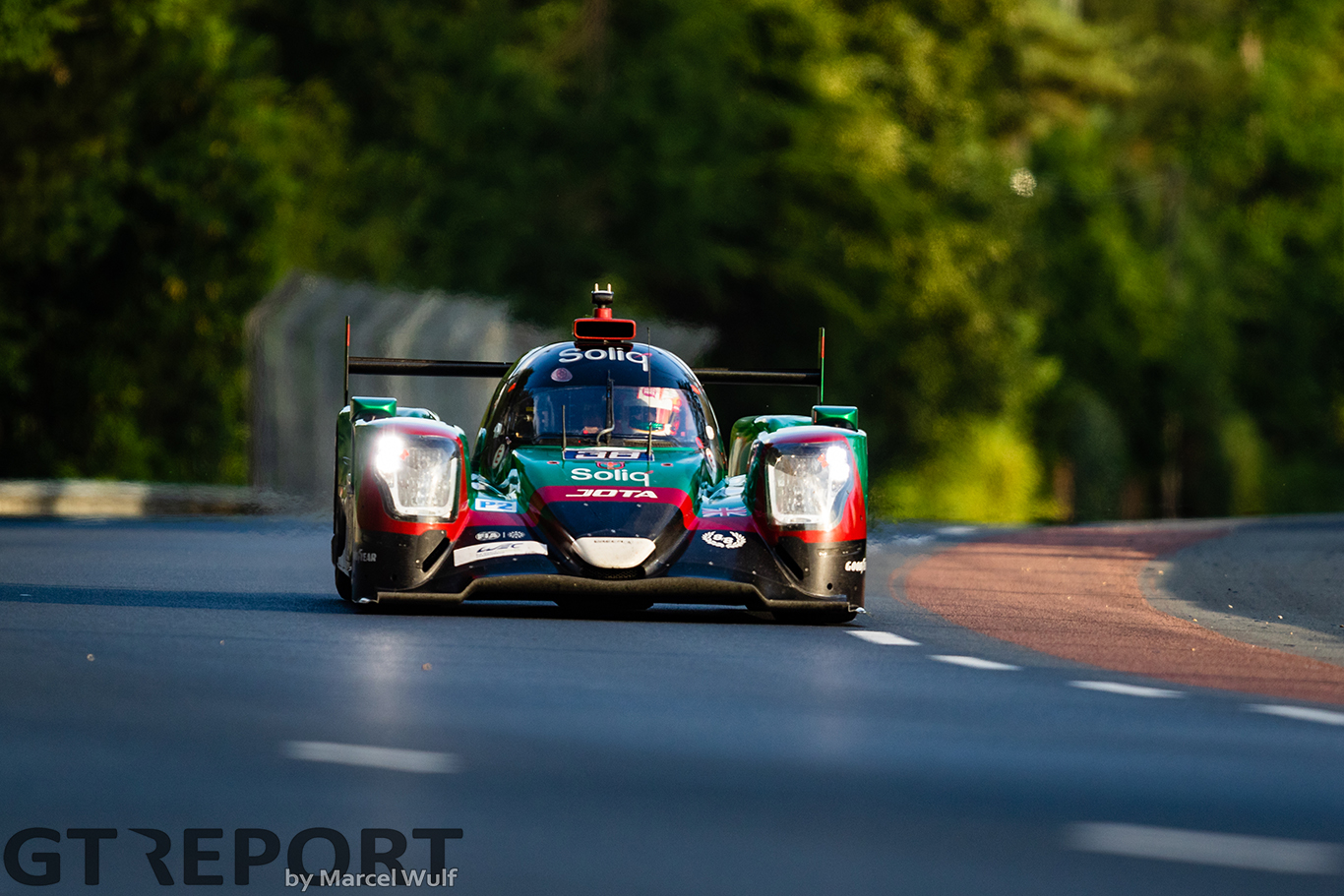 The #91 Porsche 991 RSR of Richard Lietz and Gianmaria Bruni started the race form pole position, however, it was Kévin Estre in the #92 sister car that jumped into the lead in turn 1. Estre was able to slightly pull away from the rest of the GTs initially but would come under pressure from Fuoco in the Ferrari towards the end of the first stint. The Porsches seemed to struggle with tire degradation on the abrasive Bahrain tarmac.

Fuoco passed Estre just before the running order was shaken up by the first Full Course Yellow which was called for debris on the track.

Fuoco, Estre and Bruni in the #91 Porsche all pitted before the Full Course Yellow slowed the field down, while Calado in the second Ferrari and Nick Tandy in the sole Corvette came in for service under the yellow a lap later. This handed a huge advantage to Calado and Tandy, who resumed the race in first and second, well clear of their competitors.

Miguel Molina, who took over driving duties from Fuoco in #52 Ferrari, could catch up with and overtake the Corvette towards the halfway mark of the race.

The two Ferraris at the front of the GT field seemed dominant until drama unfolded for the championship leaders. 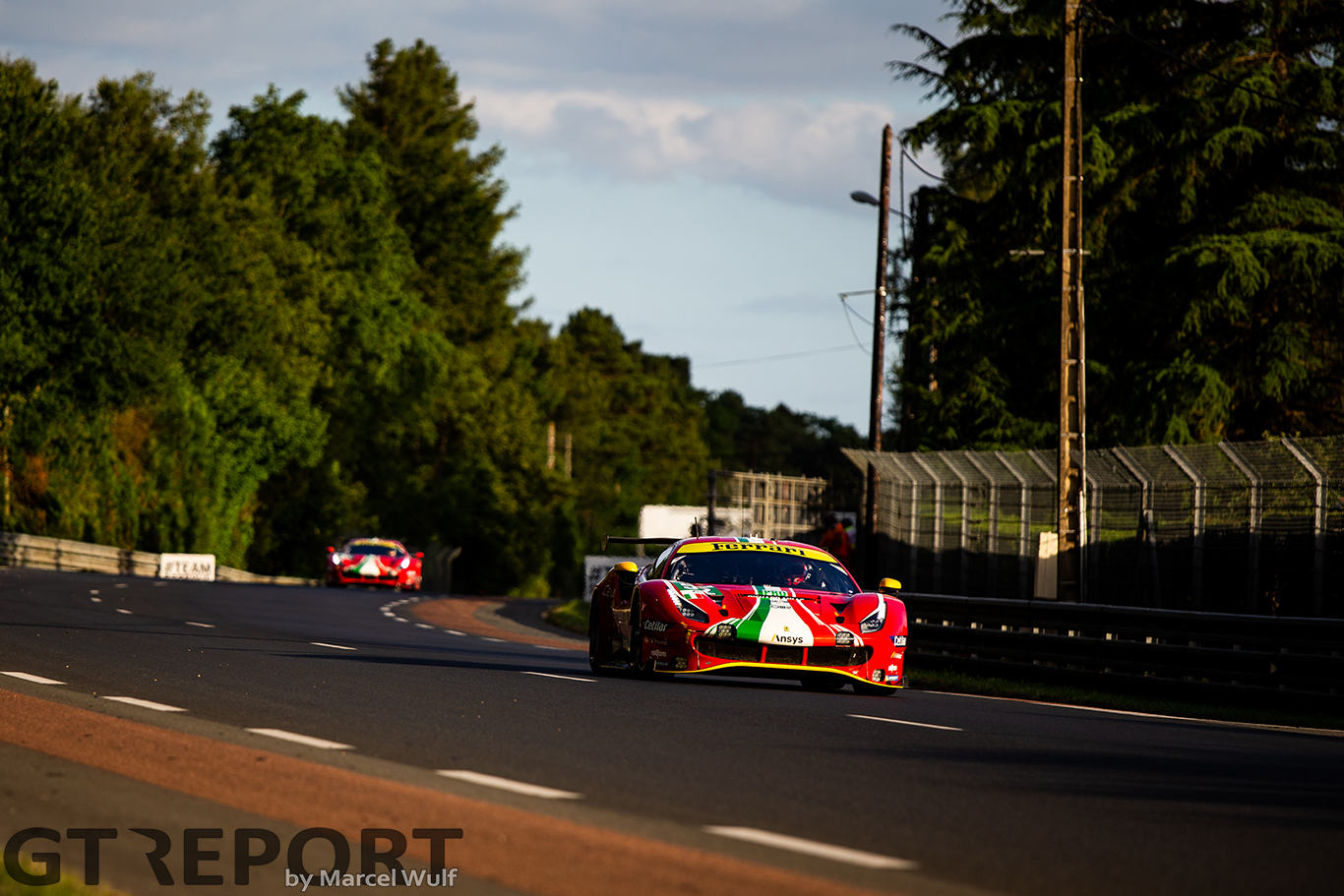 With just over two hours to go, the leading #51 car developed gearbox issues, losing fourth gear as a result. Calado and Pier Guidi quickly dropped down the order and to the back of the LMGTE Pro field, losing upwards of 5 seconds per lap to the class competition.

Hoping that the car would keep running until the chequered flag, Pier Guidi managed to stay in front of the LMGTE Am frontrunners which was crucial for the team’s championship ambitions. 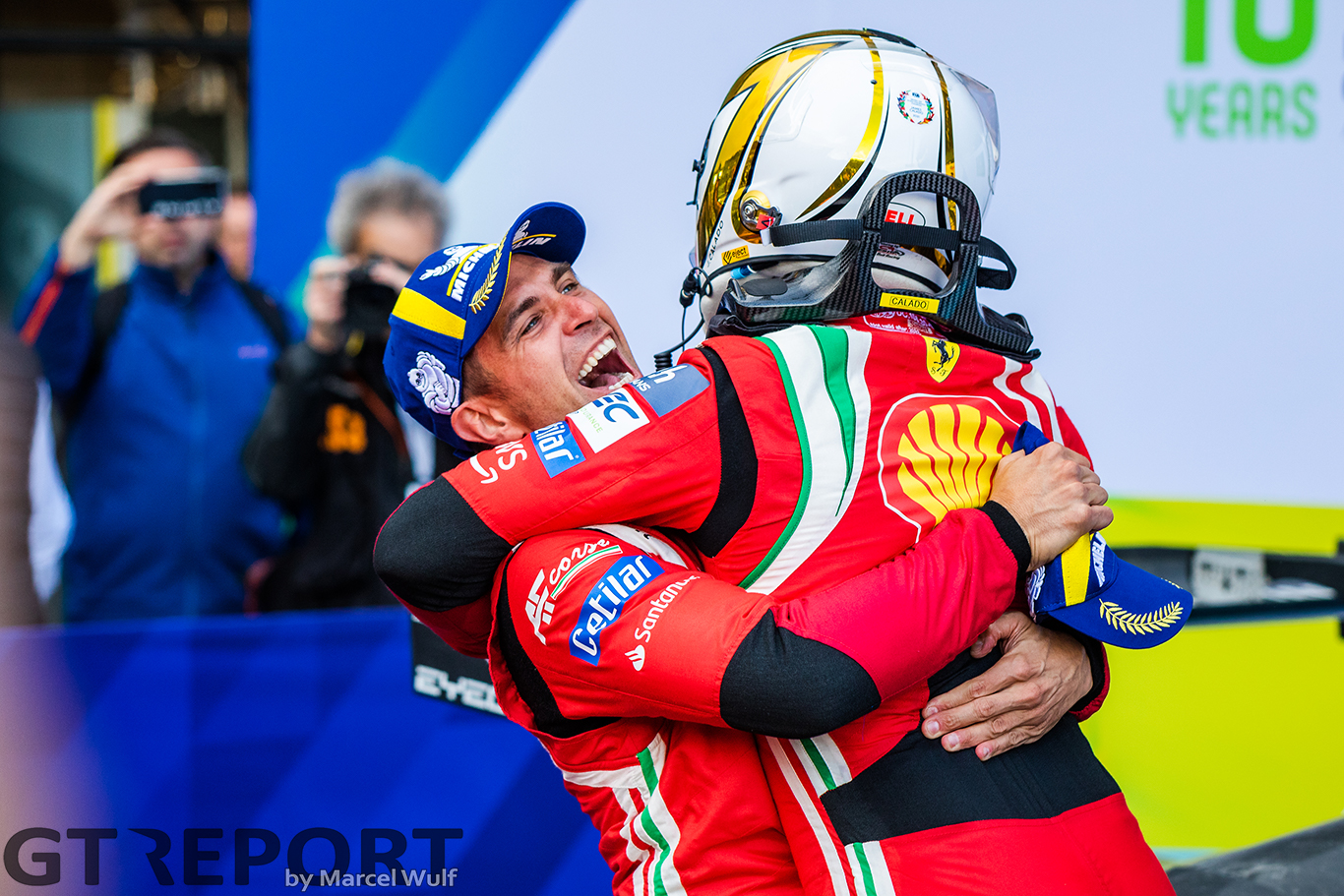 LMGTE Am class victory went to Matteo Cairoli, Nicolas Leutwiler and Mikkel Pedersen in the #46 Team Project 1 Porsche 991  RSR. Ben Barnicoat, Gunnar Jeanette and P.J. Hyett finished second in the #56 sister car for a 1-2 finish for the German team. The final podium place went to Rahel Frey, Michelle Gatting and Sarah Bovy in the #85 IronDames Ferrari. The all-female crew led a large portion of the race challenging for a race win, but came up short in the end.

Ben Keating and Marco Sørensen were crowned LMGTE Am champions as they brought their #33 TF Sport Aston Martin Vantage AMR which they shared with Henrique Chaves home in fourth place. 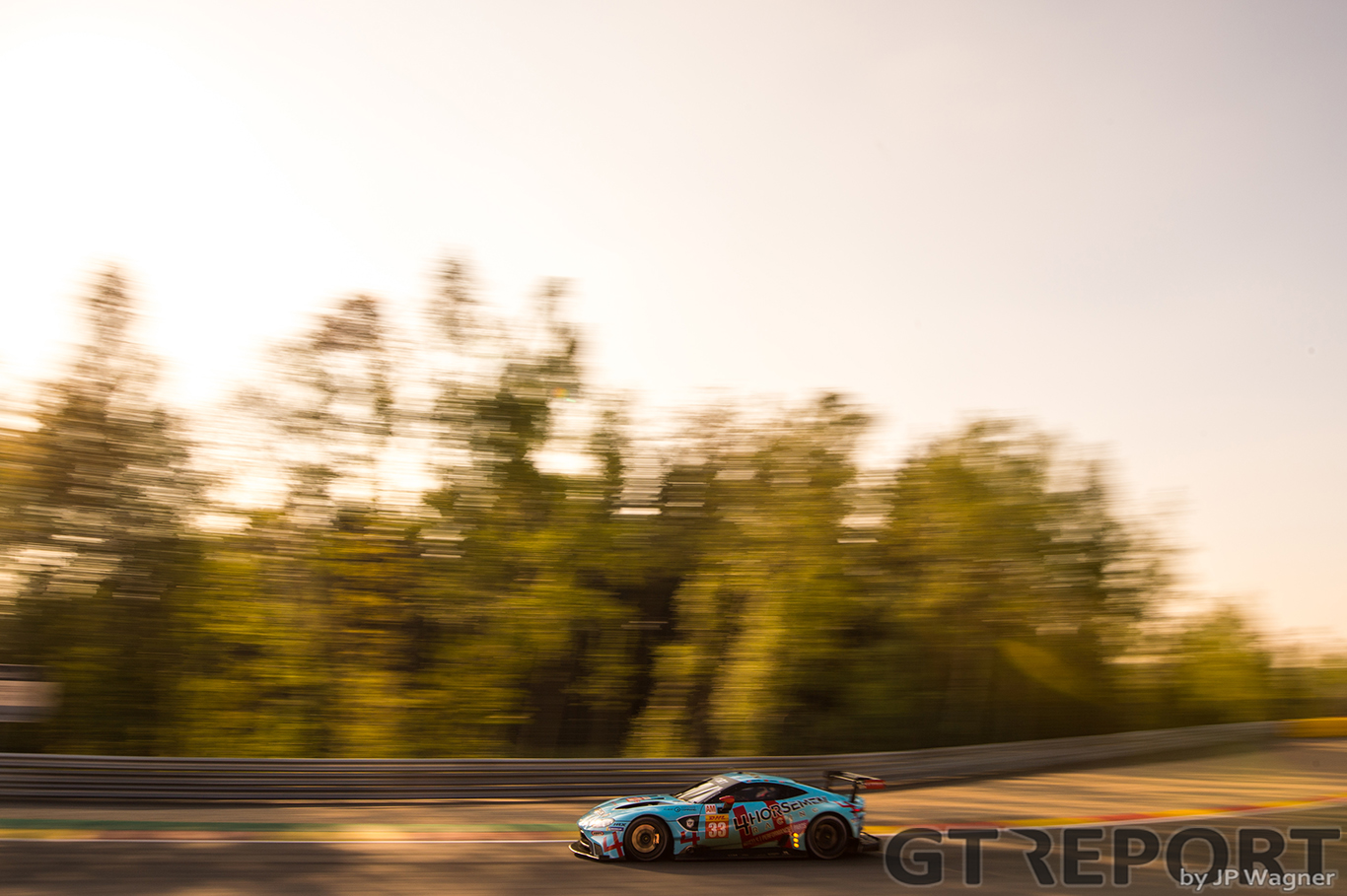 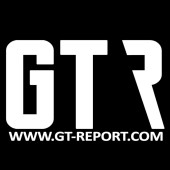 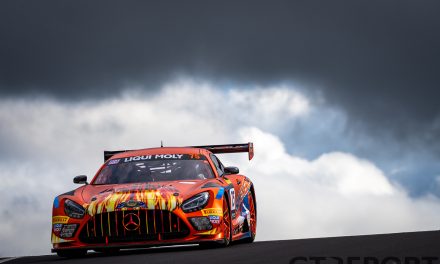 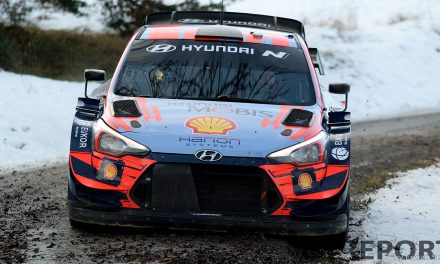