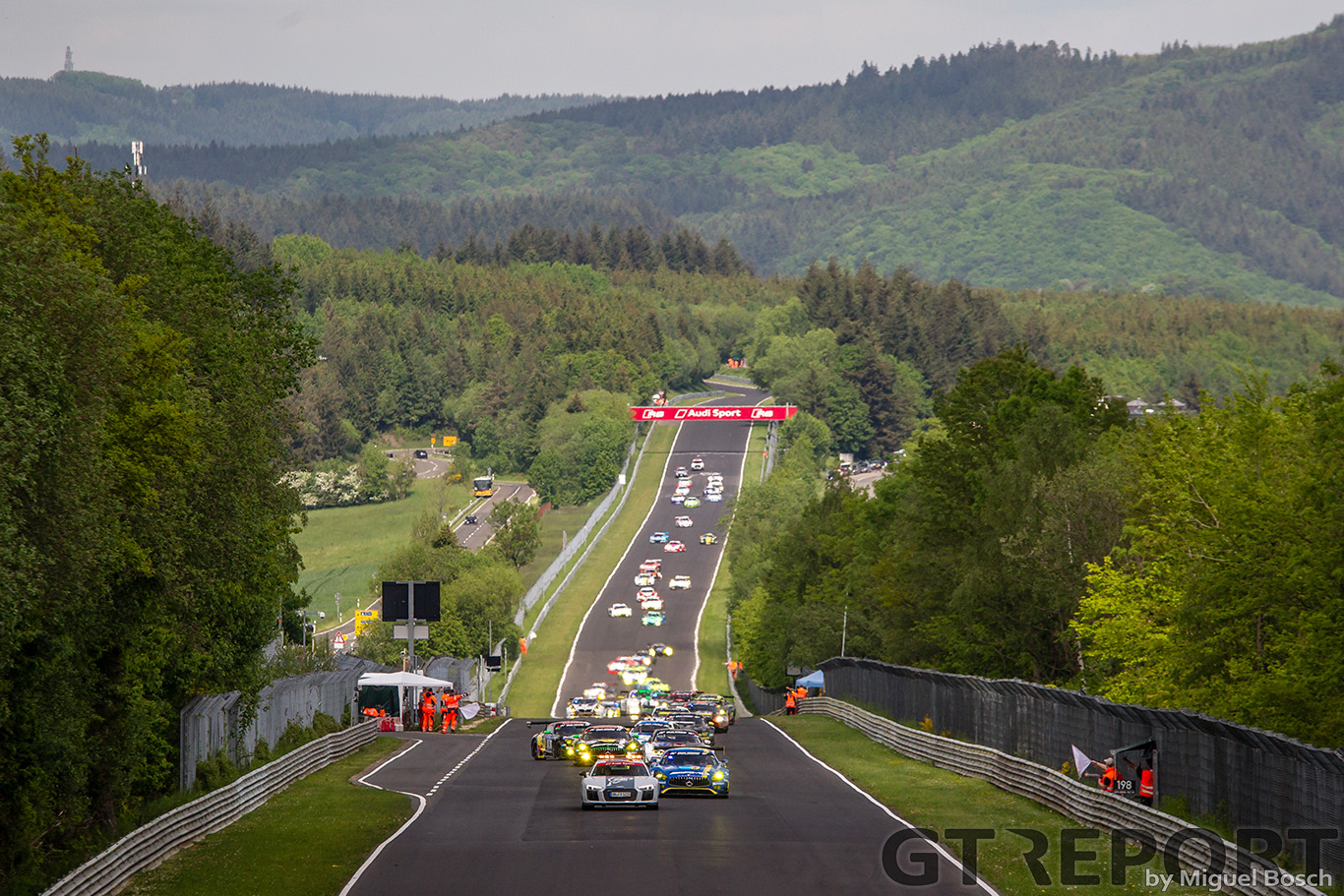 Mercedes-AMG took an overwhelming victory in the 44. ADAC Zurich 24h-Rennen. Taking the top position at dusk, AMG works teams Haribo Racing, Black Falcon and HTP Motorsport never let any one else come in between them as the trio fought amongst themselves. Pushing himself through to the lead on the final lap and leaving HTP Motorsport behind, Maro Engel brought home the win for the number 4 Black Falcon Mercedes-AMG GT3 co-driven with Bernd Schneider, Manuel Metzger and Adam Christodoulou.

For many years Mercedes-AMG had refused to fully commit to the GT3 world with factory support. The Affalterbacher tuner didn’t need to, their customer support was enough to bring the Mercedes-Benz SLS AMG GT3 great successes. But teams still wanted more. Last year, after the Mercedes-AMG GT3 was announced, AMG decided to go for it, entering a grand total of five works AMGs in the 2016 24 Hours of the Nürburgring, more than Audi ever dared to bring to the 25 kilometre long circuit in its heyday. Far beyond anyone’s expectations, when dawn arrived on Sunday morning, it were the Black Falcon, HTP Motorsport and Haribo Racing AMG crews leading the field, homing in on victory in the world’s biggest GT3 race. 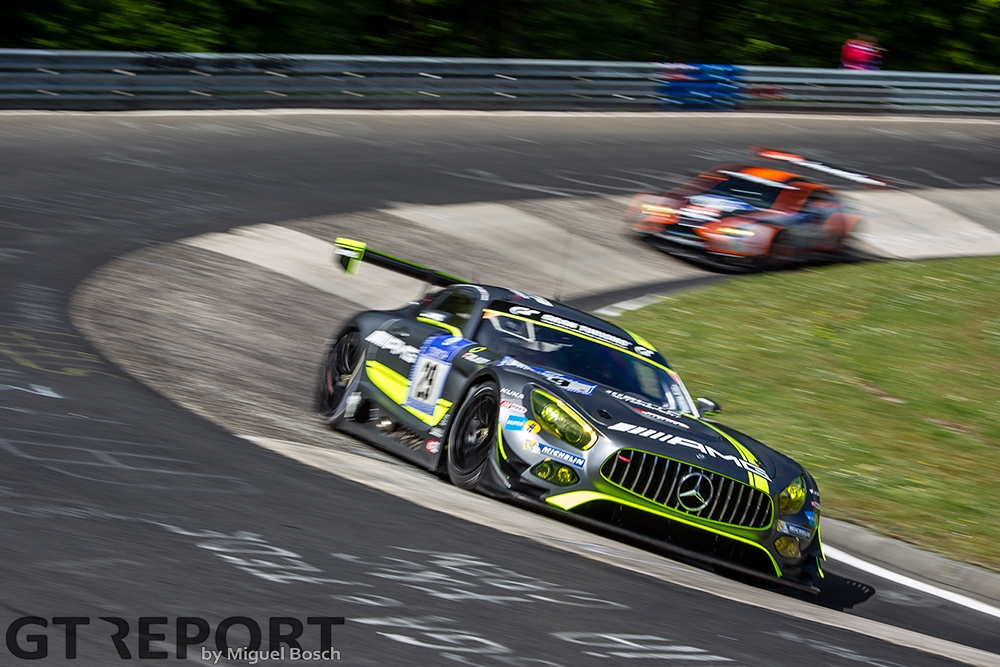 Before the AMG teams put themselves in this position, they had to overcome all the challenges the Nürburgring could throw at them. Thunderstorms had been harassing the Eifel for days already, so when the field is lead to the green flag by Maro Engel in the number 9 Black Falcon AMG, everyone knows what’s coming. It’s right there on the weather radar: A huge storm is approaching from the south-west, expected to arrive within the hour.

When the skies over Aremberg begin to darken, all hell breaks lose. In a curtain of hail, the track turns into an icy, wet road. Cars are crawling up the hill at Fuchröhre and eventually, those who can’t make it back to the pits, are parked as the red flag comes out.

“It got really dark,” GetSpeed Performance Porsche 991 GT3 Cup driver Dennis Trebing recalls, “and I was thinking to myself, ‘man, this weather sucks, it’s really dark and it’s getting pretty crummy, I think it’s going to rain.’ But then, thank god, we had the live stream in the pit box and our other car in front saw the rain, so the team gave me the heads up, saying, ‘hey, be careful.’

“The only big accident I’ve ever had on the Nordschleife happened because I was on slicks and I hit rain without warning and I flew off. So I was like, ‘let’s not repeat that one.’ I made sure I held back and drove extra safe and careful. Thank god I did and the car came back in one piece.

“The team gave me great information. They said: ‘Be careful in this area, we think this is where it begins.’ So I slowed down. But it’s scary. Even on rain tyres, you’re sitting there, thinking, ‘man, this is not safe.’ And then you’re on slicks and it makes it a hundred times worse.

“It’s one of those situations, it’s the Green Hell and you never know what’s going to happen. It’s the never-ending story of the Green Hell: The weather always changes but it will never change its face.” 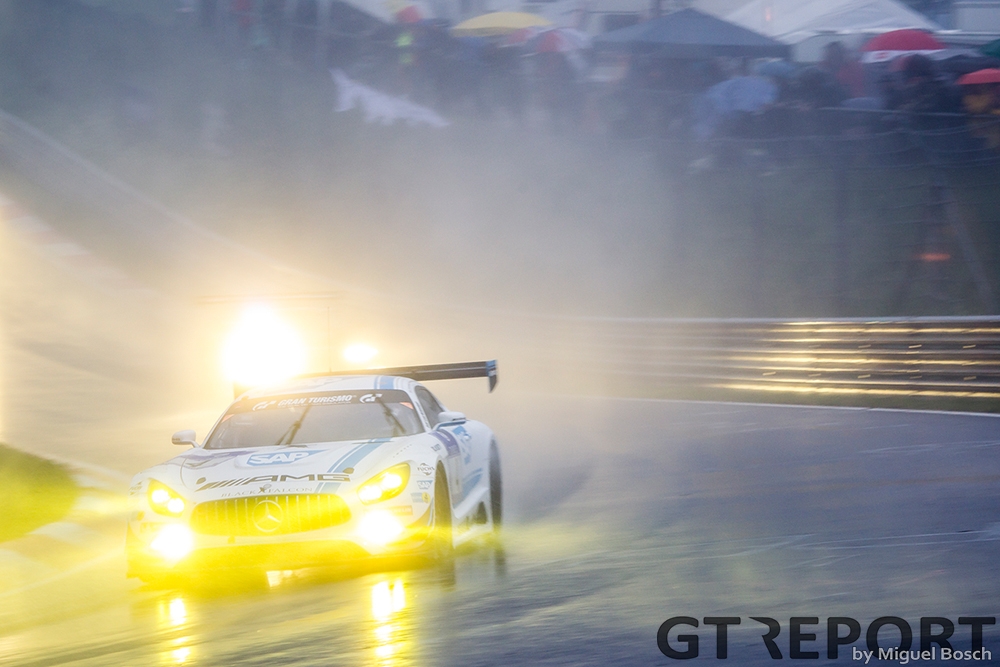 After the stranded cars have made their way back to the pits, the waiting begins. Will there be a restart tonight? And if so, will it be dry? Is the rain that is still to come as heavy as what we just had? The answer comes shortly after 20 o’clock, when the safety car pulls into the pits after three pace laps and the green light is given for racing to continue on a very wet and foggy Nürburgring.

Maro Engel, at that point still in the blue coloured Black Falcon AMG, has to yield the lead to Jörg Müller in the number 18 Schubert BMW M6 GT3, who overtakes his fellow countryman going into the first corner on a monsoon race track. As Engel drops down the field, even Nordschleife specialist Müller is struggling to keep the big BMW on the track and he, too, loses the lead before the first lap is over.

“The circumstances in the car were very difficult,” eventual winner Bernd Schneider describes the first laps after the restart. “We had no [visibility] as it was foggy and with the spray of the other cars, it was really hard to drive. There was also aquaplaning on the track, that was very difficult. But after a couple of laps it became better and then the car was really good.”

Now with Rowe Racing BMW M6 GT3 pilot Markus Palttala setting the pace, the battles aren’t letting up. Haribo, Schubert, WRT, HTP, Manthey Porsche, Phoenix, they’re all fighting each other through the mist to get to the front of the field. 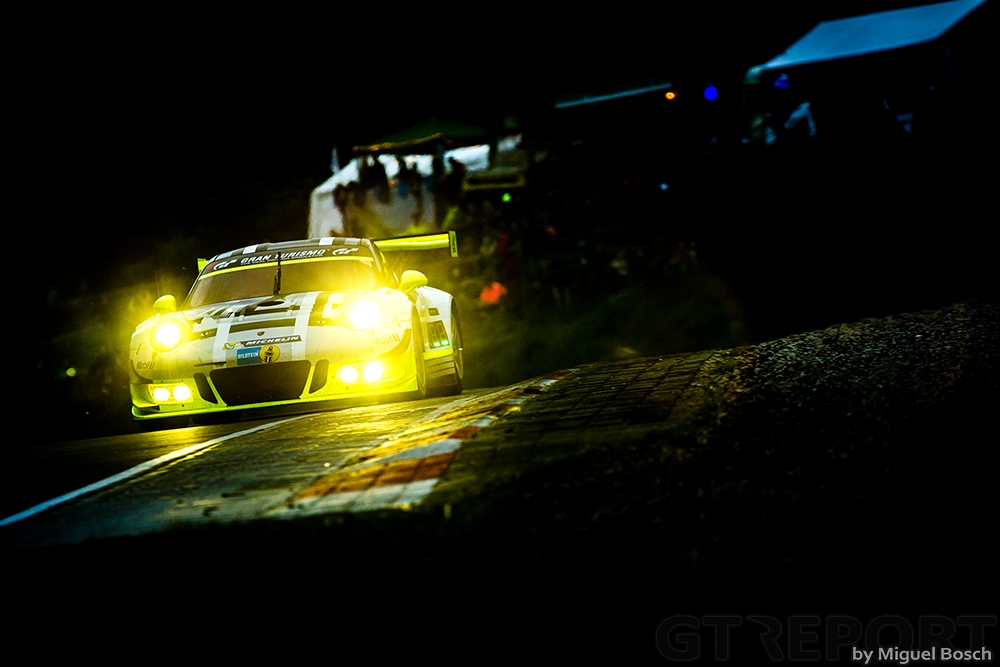 Closely chased by Uwe Alzen in the number 8 Haribo Racing Mercedes-AMG GT3 and Christian Hohenadel in the HTP Motorsport AMG, Palttala works his way through the rain and fog. Just like Müller shortly before, the Fin also has to let his pursuers by. Getting caught up behind slower traffic at the Karussell, he chooses to go the long way around, letting the two AMGs slip through via the banked inside of the corner.

A lap later Alzen is relieved from the pressure of Hohenadel, when the HTP spins at the exit of Hatzenbach. Reversing to get back into the race, Hohenadel almost takes out the white-blue Black Falcon. Quick thinking by Schneider, who aims for the slippery grass, avoids a collision.

The first round of pit stops sees the number 18 Schubert Motorsport BMW M6 GT3 of Jörg Müller retake the lead. A short pit stop is enough to jump the other cars. Only minutes pass with the long-time BMW works driver in front, as at Tiergarten it all ends with a loud bang, huge cloud of smoke and a burning exhaust. A blown engine ends any aspirations Müller and teammates Jesse Krohn, Augusto Farfus and Marco Wittmann had of bringing BMW an N24 win for its hundredth anniversary.

While Schneider continues to move up the order and the Haribo AMGs take hold of the first two positions, dusk reaches the Eifel. With the front of the field finally sorted out and teams settling in their pace, the race goes into the night. 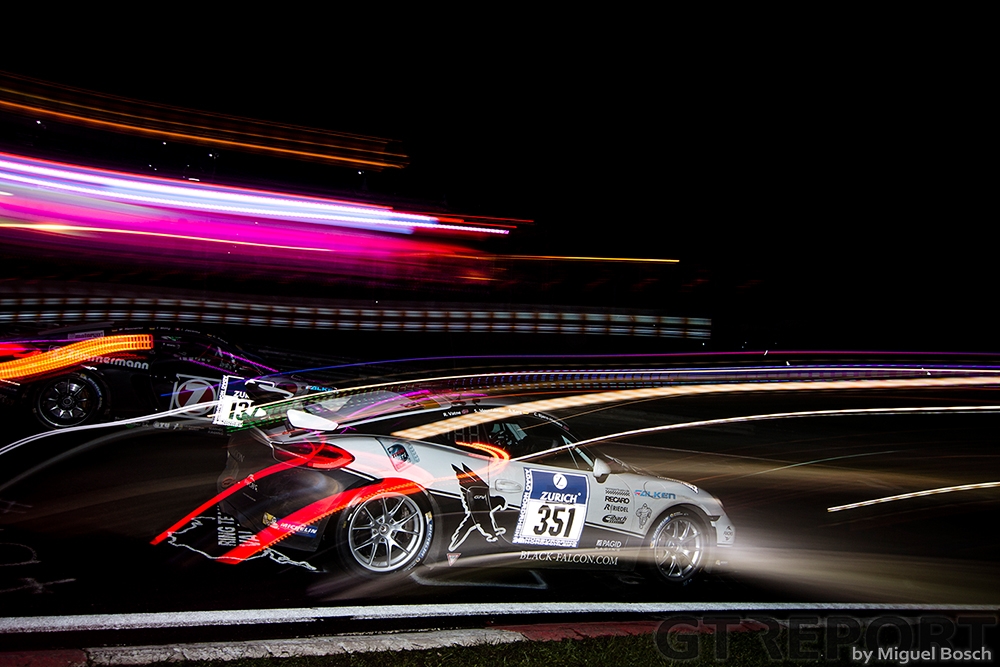 In darkness Haribo leads. The squad from Bonn retires the number 8 car after is sustains damage and focusses solely on the better placed AMG, as was the plan all along. They are followed by the number 4 Black Falcon AMG as well as other AMG constituents.

When dawn approaches, Audi is still holding on with three cars in the top ten, keeping hope of a repeat win alive. The reigning champions won’t be around for much longer, though. As the sun slowly rises over the horizon, 2015 winners WRT have to endure a three hour long repair after Nico Müller has to take avoiding action at the unnervingly fast Mutkurve and finds himself sliding into the guardrail.

Three laps later, Markus Winkelhock in the Phoenix Racing Audi R8 LMS GT3 takes out both himself and Audi customer team Land Motorsport with Connor De Phillippi behind the wheel, when the experienced German notices the Code 60 zone too late and smashes into the back of the slowed down Land Audi.

With the final hours in sight, the top three cars are running mere minutes apart. Another rain shower hits the mountain course late in the morning. The leaders get through unharmed, but then disaster strikes for Haribo Racing. Having speeded through a Code 60 zone, the leaders are handed a 1:32 minute time penalty, demoting Uwe Alzen, Lance David Arnold, Maximilian Götz and Jan Seyffarth to behind the number 29 HTP Motorsport AMG of Christian Vietoris, Marco Seefried, Christian Hohenadel and Renger van der Zande, who have been running with the leaders since the day before, and the number 4 Black Falcon AMG. 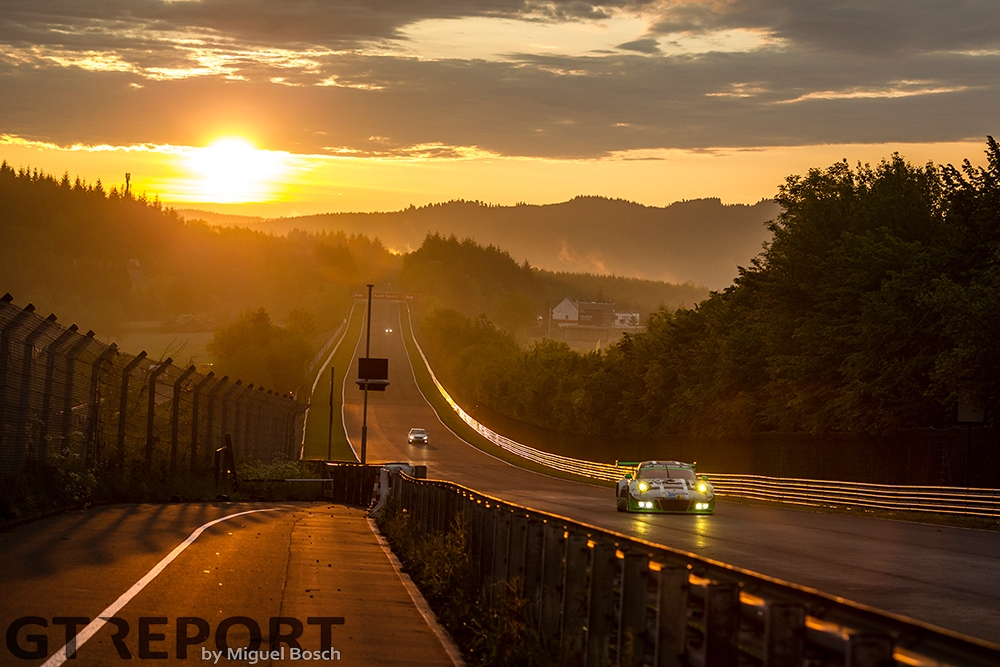 It’s go-time with just a few hours to go and Maro Engel is pushing like hell. Going faster and faster but hitting traffic at just the wrong places is keeping Christian Hohenadel at a distance. The HTP crew, however, has just started to save fuel, hoping they can stretch the stint all the way from 75 minutes to go to the waving of the chequered flag.

The idea is novel, but Hohenadel can’t make it. Two laps before the finish, he comes in for a quick splash-and-dash, losing additional time when the car needs to be push-started. It’s just what Engel needs. Watching the HTP AMG emerge from pit lane only hundreds of meters away, the Black Falcon team steps it up another notch.

It’s 40 seconds to go as Hohenadel crosses the finish line for the final lap. While slicing and dicing through traffic the lap before, Engel has set the fastest lap of the race and pushed his competitor hard enough to squeeze out another lap, and another opportunity to claim the crown. Braking for the Michelin-Kurve, Hohenadel leaves the door open. Engel doesn’t hesitate and in a heartbeat places his AMG next to Hohenadel’s, pushes himself through, and drives off, leaving HTP in second place and angry about the tough but fair move.

There’s nothing any more that Hohenadel can do. Engel is still on a roll and makes his way through slower cars to take victory after 24 hours, 7 minutes and 46.5 seconds of racing.

“It was a combination of many things,” Schneider explains his second 24 Hours of the Nürburgring win. “I think the car was very good, and we were well prepared from last year to this year, as last year was very disappointing when we retired after a couple of hours. We had a very good period in which we built up the team, meaning the drivers line-up with Maro, Adam, Manuel and myself. And then together we worked very hard on the set-up from the first VLN race until today, for qualifying, rain, and dry. 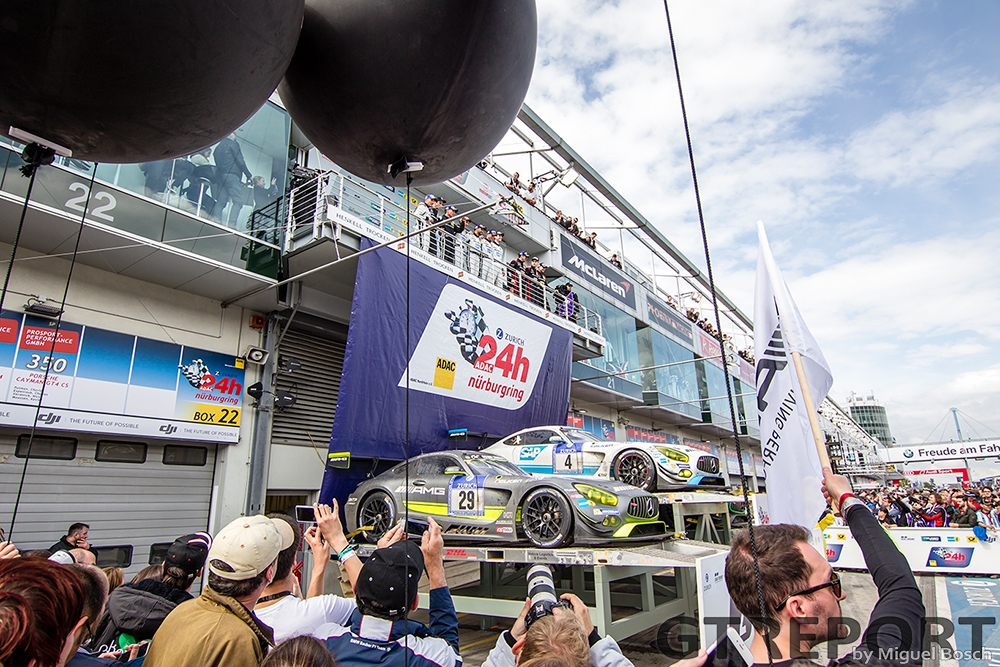 “The car was really strong, we had no technical problems and the team made a perfect strategy.”

About Engel’s overtaking manoeuvre on the final lap, Schneider is adamant that the attack was clean.

“It just was a really good manoeuvre from Maro. He was late on the brakes, and I think it was a hard manoeuvre, but absolutely fair and good. I was a bit jealous that I didn’t do it. It was really good.”

It’s Rowe Racing that takes the “honours” of the first non-AMG classified car. After a miserable restart on Saturday in which Philipp Eng couldn’t get his M6 started, the car was pretty much out of contention for the win before the race had even reached sundown.

Zakspeed completes the AMG party by finishing in sixth place. As the only true privateer Mercedes-AMG GT3, drivers Sebastian Asch, Kenneth Heyer, Daniel Keilwitz and Luca Ludwig kept their heads cool in the difficult circumstances to celebrate reaching the finish first among the non-works supported teams. 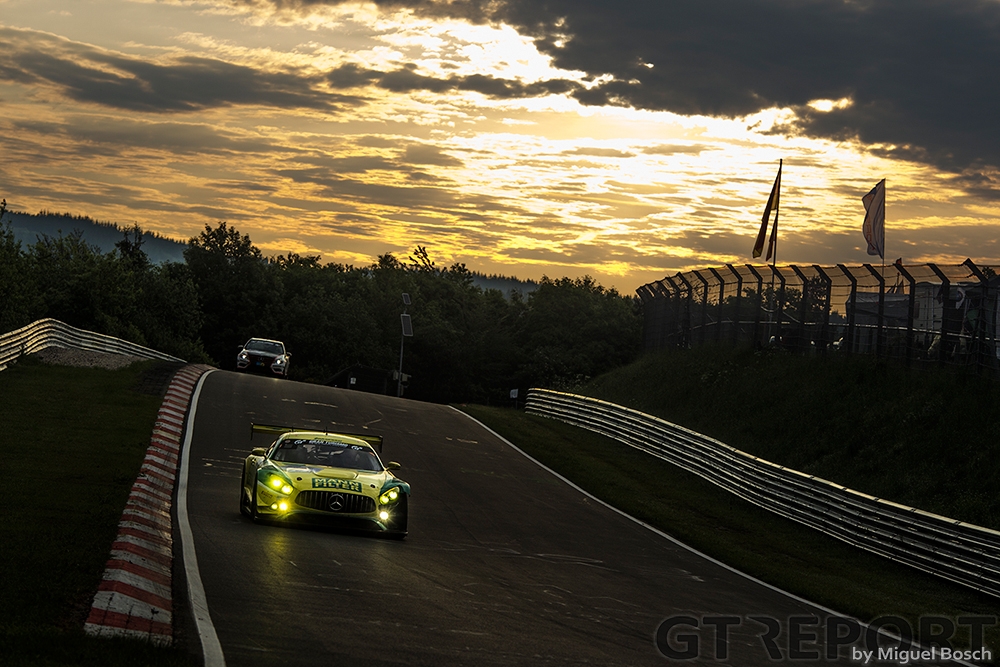 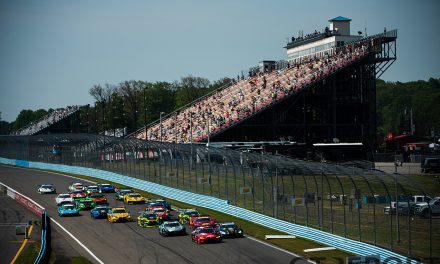 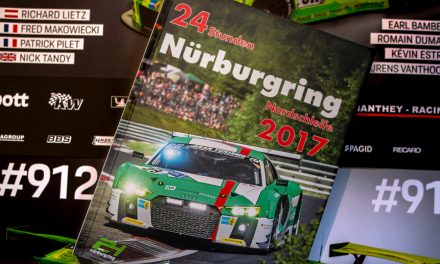