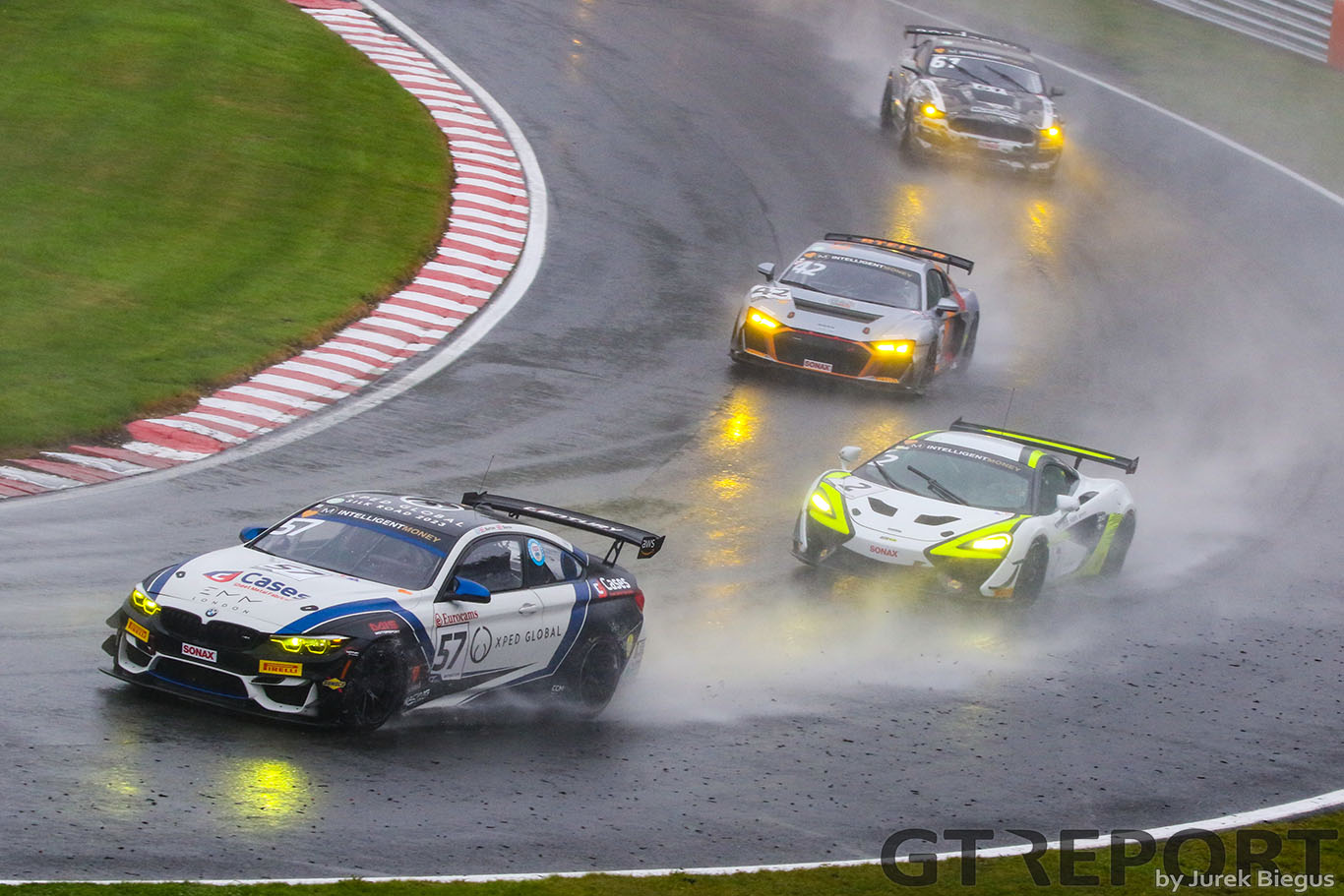 Century Motorsport’s Gus Burton and Will Burns secured the Intelligent British GT Championship’s GT4 title in fine style, as a charge up the order from Burns secured them the crown with a crushing win in the soaking wet in their BMW M4 GT4.

In GT3, WPI Motorsport prevailed in the murk and spray to claim a second victory of the season for Phil Keen and Michael Igoe – the latter not putting a foot wrong in conditions more suited for boats than cars.

In the top category, the action was intense as soon as the red lights went out with Scott Malvern getting a good launch from pole in the Team Parker Racing Porsche 911 GT3 R, but he was quickly reeled in by the Barwell Motorsport duo of Dennis Lind and Sandy Mitchell who made it a three-way fight for the lead. 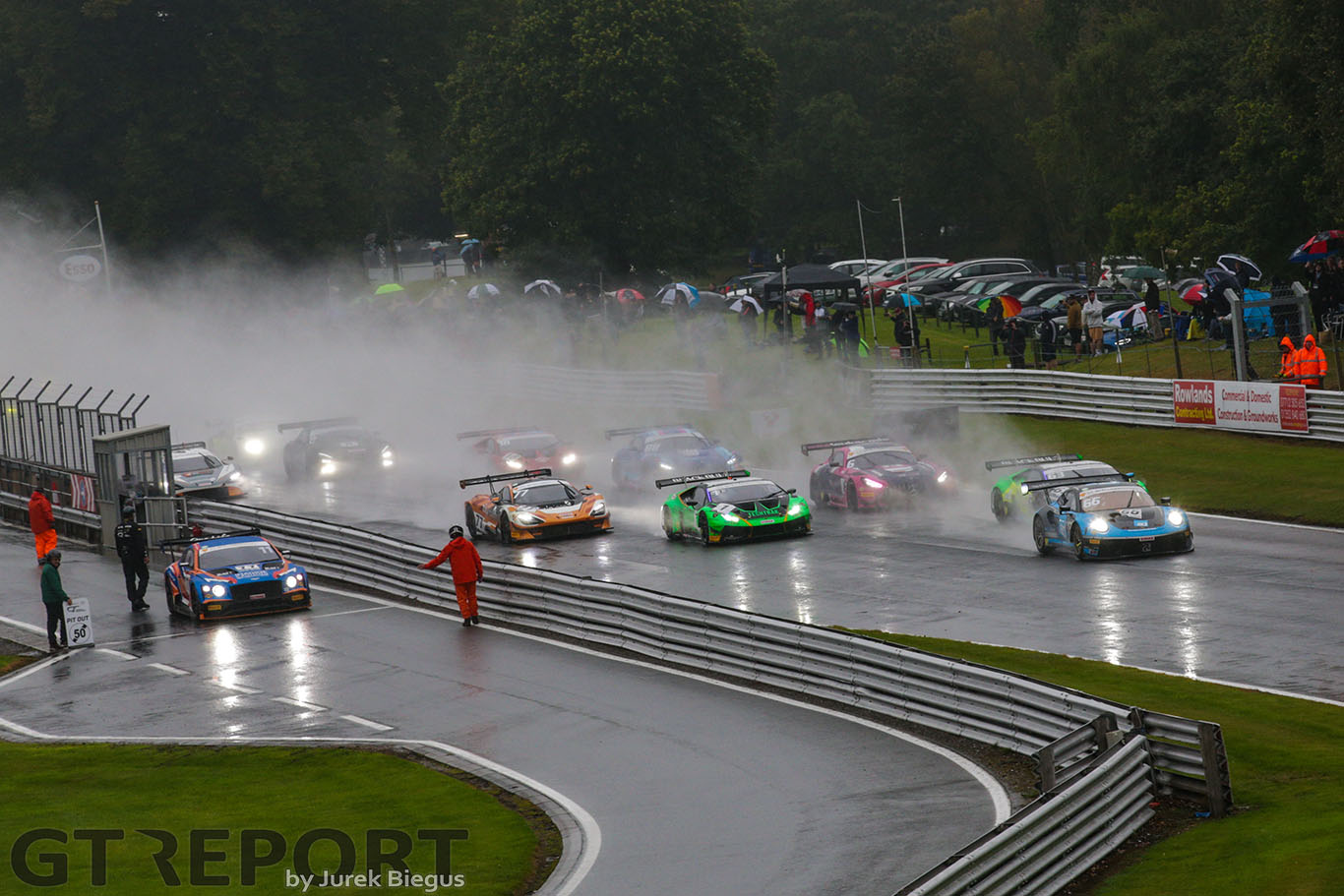 The trio were separated by less than a second as they went bumper-to-bumper through what was a complete wall of spray around the Oulton Park Circuit – a contrast to the dry conditions in the opener earlier on.

All of them were battling without giving an inch, which proved to be a slight undoing for Lind. Heading into Hislops, Malvern had to check up behind Katie Milner, he managed to get past on the exit but the slowing up gave Mitchell the opportunity to pull alongside Lind with a side-by-side duel decided on the run through the right-hander at Old Hall in Mitchell’s favour.

Before the action could heat up any further, there was a 12-minute pause as a safety car was called for to recover Tom Onslow-Cole’s RAM Racing Mercedes, after he span on the grass for a quite a way down the track, finally coming to a stop in the gravel trap on the entry to the Shell Oils Hairpin. 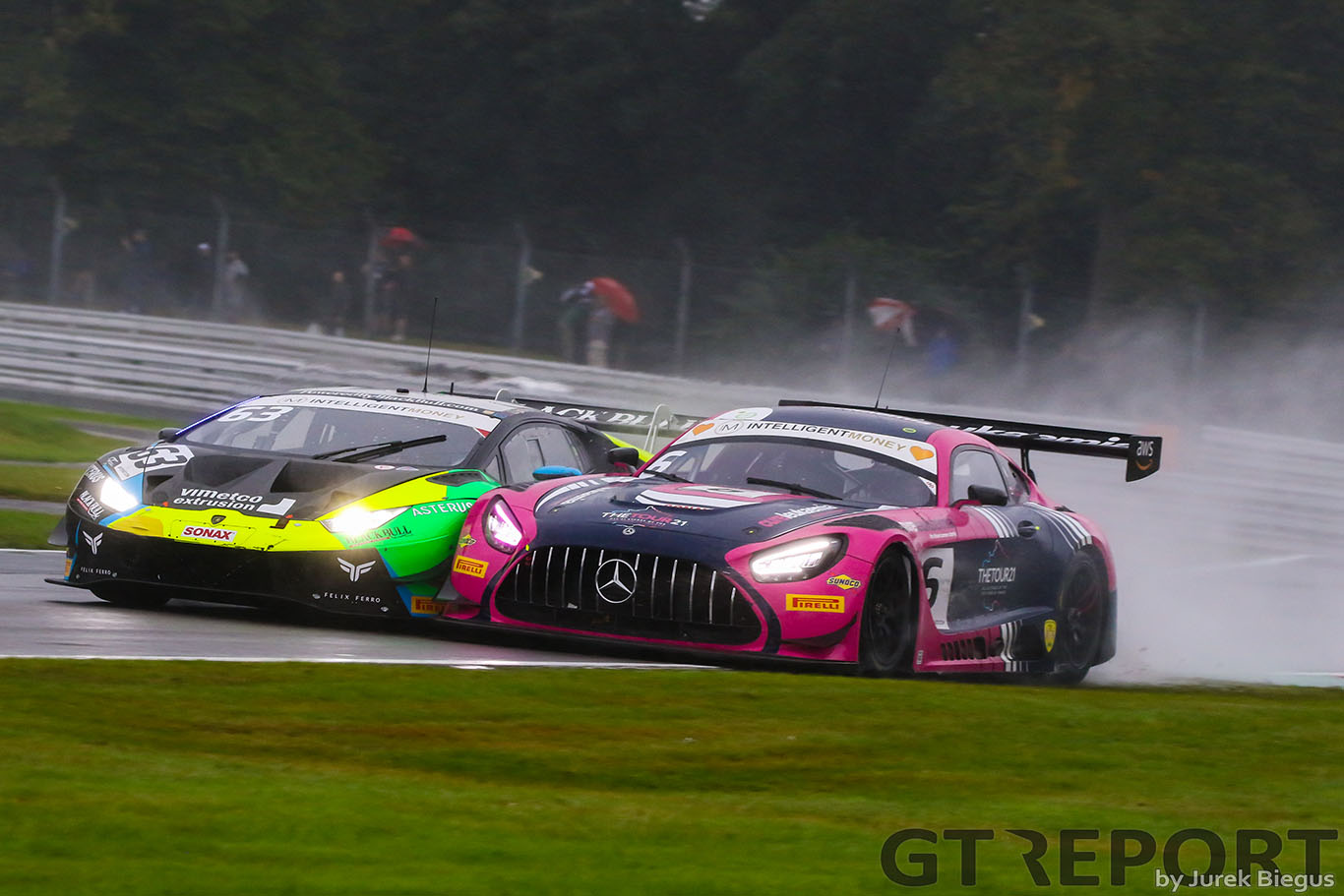 The safety car was perfectly timed with the GT3 pit window opening, meaning everyone dived in as soon as possible to make their mandatory stops. It also meant the real winners from the stops were those without success seconds from the opening race, namely Igoe and Barwell’s Adam Balon – who took over from Mitchell – and Ian Loggie, who came out in the lead.

That, unfortunately, didn’t last too long as Loggie was pinged for a pit exit violation and had to serve a drive-through penalty.

Promoting Igoe into the lead, he didn’t look back as the WPI Lamborghini was carving its way through the wet conditions and opening a sizeable gap on Balon – helped when the latter was caught out by the conditions and span at Old Hall.

While Igoe took a comfortable win – adding to the win he took at Brands Hatch alongside Phil Keen – Balon managed to hold on to his second-place and slim down the points advantage of Lind and Leo Machitski at the top of the championship – the latter duo finishing just off the podium in fourth.

For Keen, victory was just reward for the efforts of both Igoe and the team throughout the weekend. 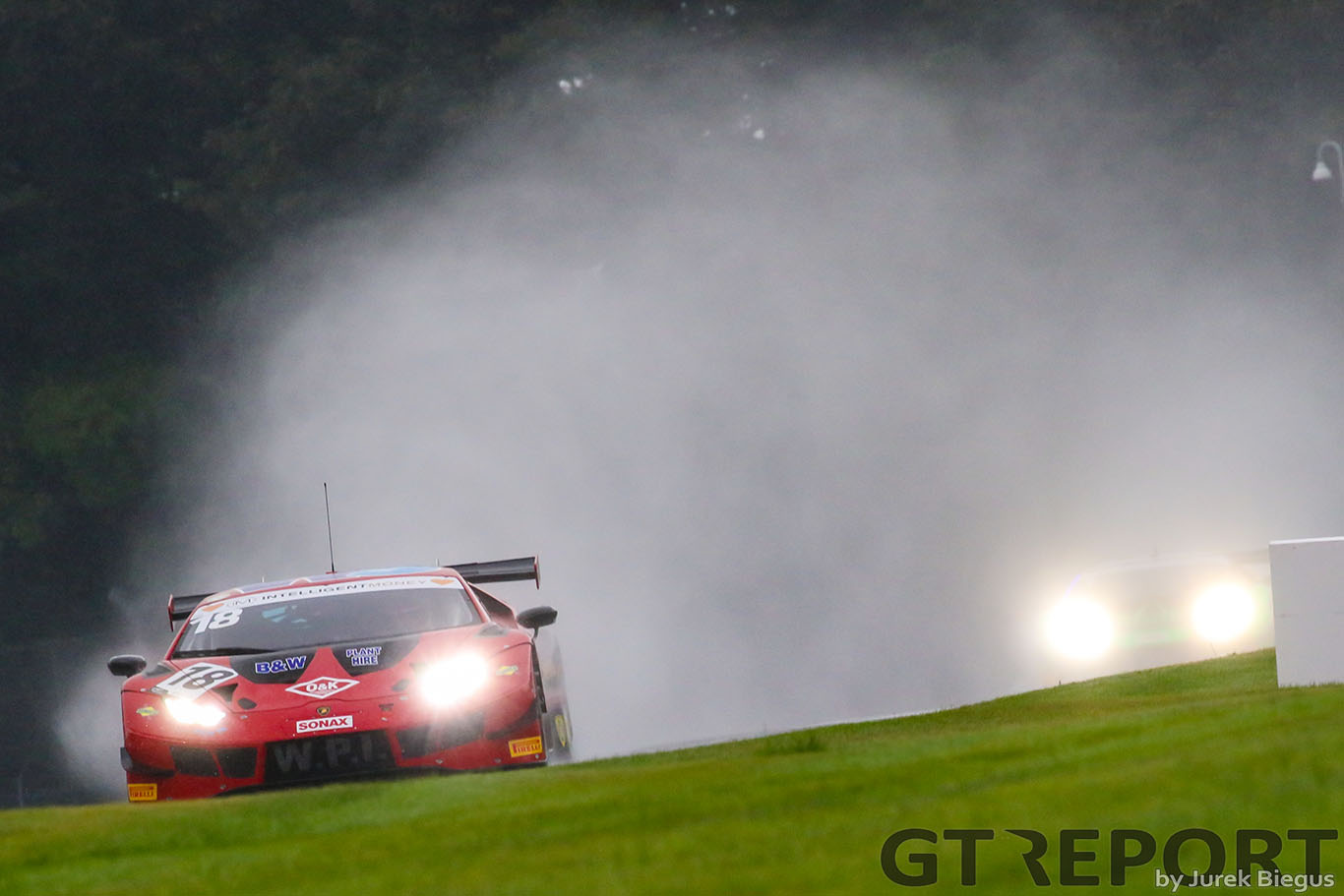 He said: “It was good, Michael has been driving really well and the team has been working really hard. Great pitstop helped us jump a few cars in the pits and then Michael brought it home.

“There’s not a lot you could do [with the conditions], we just drove in a train – we all did – and then in the pits we managed to jump three cars and then Loggie got a penalty for a pit infringement, so Michael just had to bring it home.

“I don’t think the safety car really helped, I think it caused mayhem because everyone boxed on the same lap – which probably did help us because everyone else had a kerfuffle and that allowed us to get past.”

The title fight will mean there’s now definitely a return to the #DoningtonDecider – after skipping a year thanks to the final round at Silverstone in 2020 – and there’ll still be a Mercedes representative after a cracking fight back from his penalty for Loggie.

Coming out from his drive-through in sixth, he benefitted from a rare mistake from Richard Neary – who spun and made contact with the barriers at Shell Oils – to move up to sixth. He then found superior grip where others were struggling to dispatch Machitski for fourth and then Porsche racer Nick Jones for third. 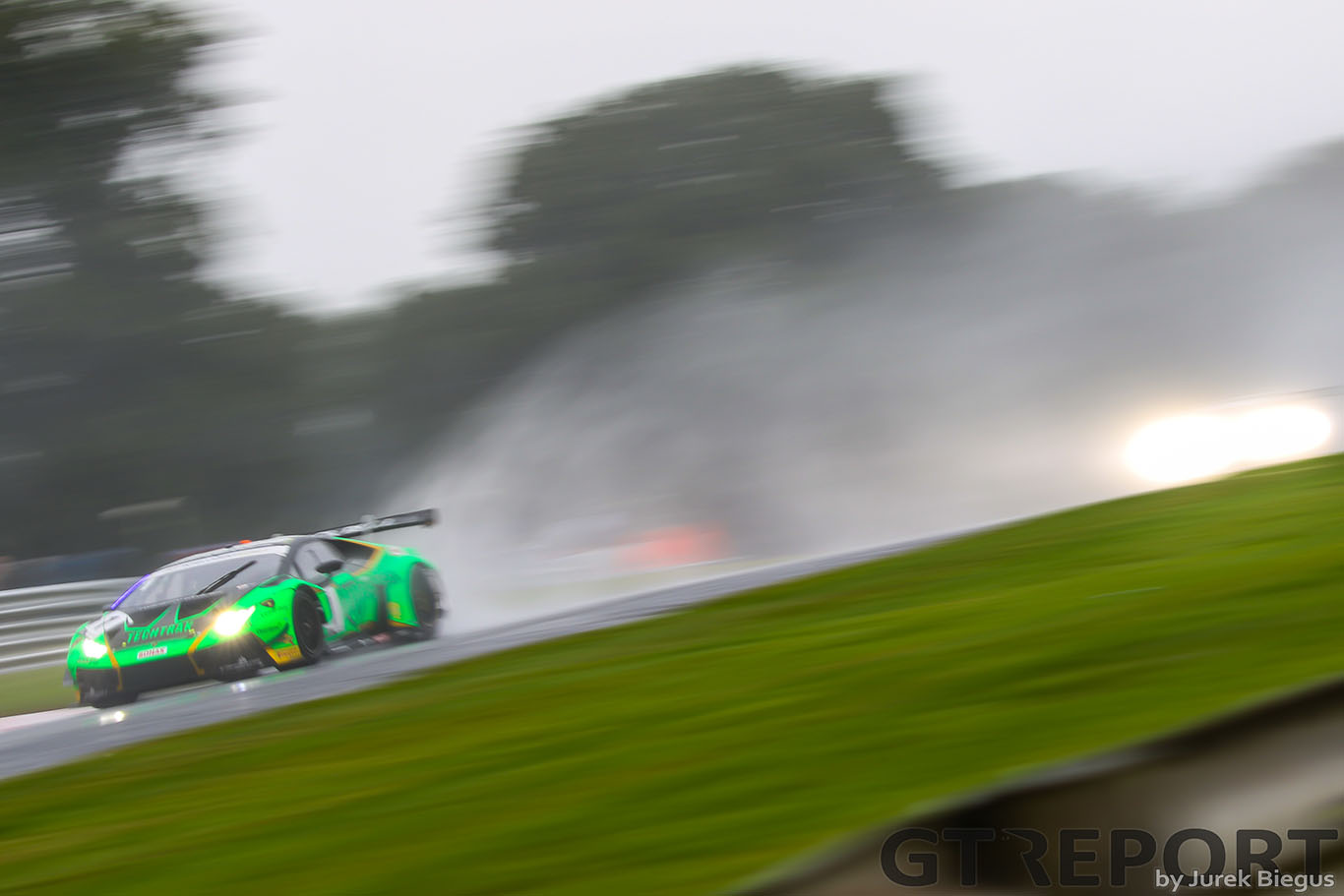 Behind Loggie and Machitski, Jones took fifth alongside Malvern, having put in a great closing stint in what is a rare wet race for him in the Porsche as he learns the car he only started racing this season.

Sixth went to the Enduro Motorsport McLaren of Morgan Tillbrook and Marcus Clutton, a few seconds ahead of the Abba Mercedes of Sam & Richard Neary.

The highlight of the GT4 class was a stunning drive from Will Burns to ensure he and Gus Burton won the class title in fine style with a crushing win in their BMW M4 GT4.

At the start, it was actually Jamie Caroline who was the class of the field as he found a way past Darren Turner to lead in the Toyota Gazoo Racing Supra, with Burton settling in for third for a time, before he was passed by a surging Sennan Fielding in the Steller Audi who moved his way up to second. 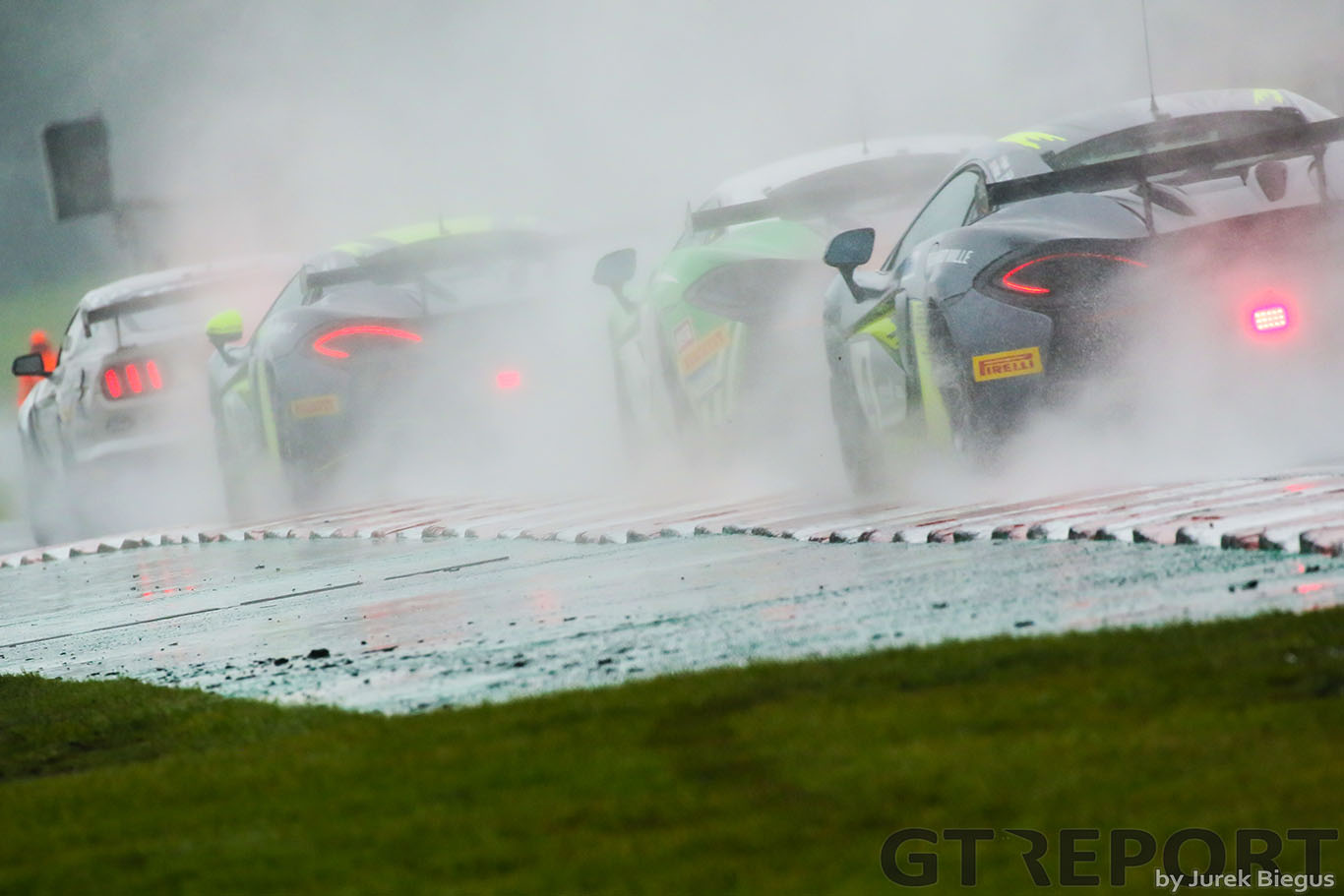 The order only significantly changed in the pits, held under the safety car to recover Onslow-Cole’s gravel-bound Mercedes. Everyone bar Caroline and Turner pitted as soon as the window opened, the end result being that those two dropped to the rear-end of the field and the lead was handed to the Team Rocket RJN duo of James Kell and Michael Benyahia.

Taking over the #57, Burns made easy work of dispatching a couple of cars ahead of him and was closing down rapidly on Benyahia. It wasn’t easy for a while to try and make a move for second, but then an opportunity was gifted to him as Benyahia and Kell went side-by-side into the Hislops chicane and started shoulder barging each other.

The drop in pace for the duo allowed Burns to dispatch Benyahia, and then get onto the back of Kell. He made the eventual race winning move on the inside of Old Hall corner, as Kell ran slightly too deep into the right-hander and Burns swept through on the tighter line having a speed advantage going up the main straight.

While Kell held on for second, Benyahia slipped even further down the order having fallen victim to Will Moore’s superb charge in an Academy Motorsport Ford Mustang which was a revelation in the wet, considering the size of the American muscle car. 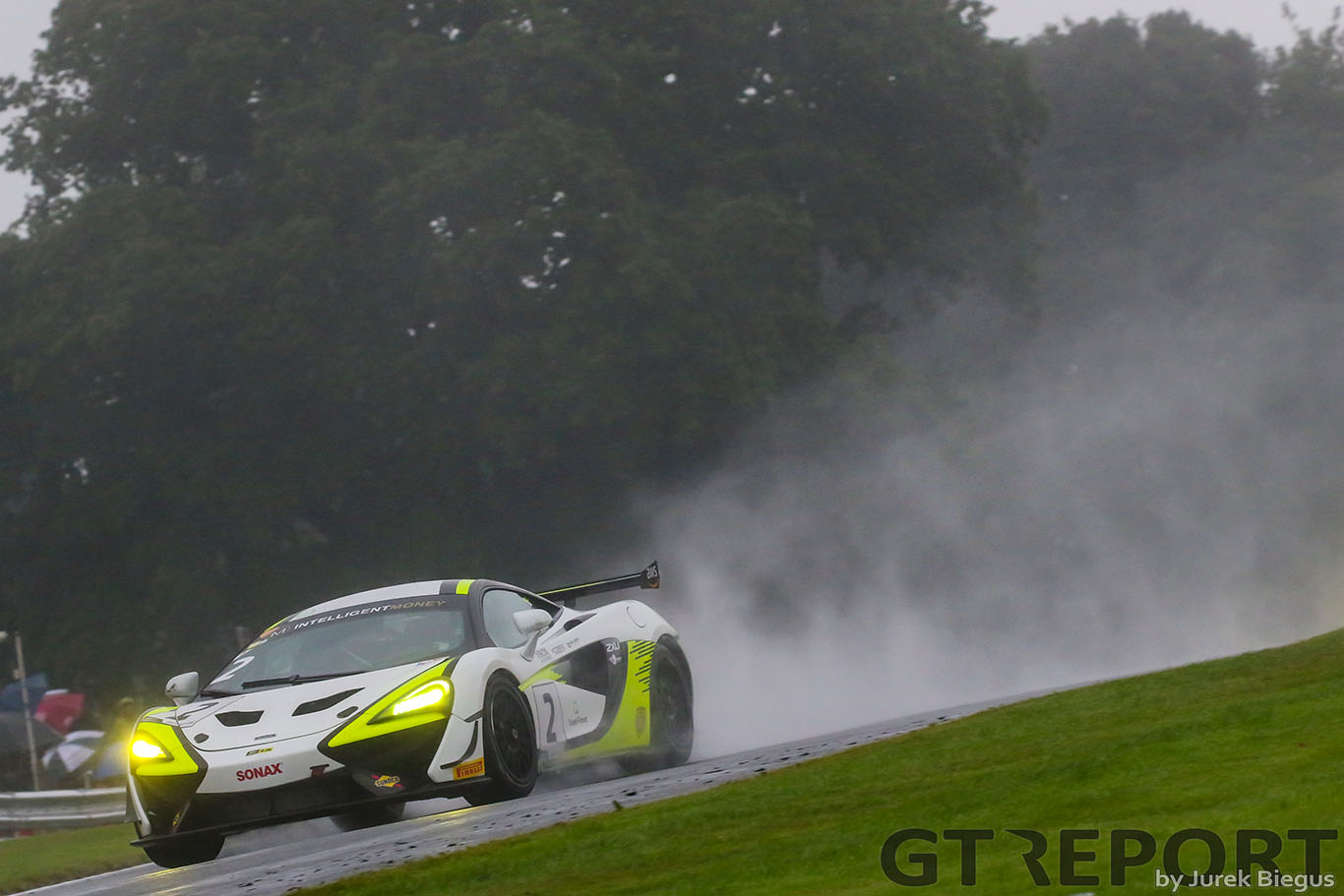 Benyahia slipped even further late on as Balfe Motorsport’s Ash Marshall also passed him right at the close to leave Benyahia and Alain Valente in fifth.

It was the final of the Team Rocket RJN McLaren 570S GT4s in sixth, after a solid recovery from Harry Hayek and Katie Milner having been shoved off by the #9 Century Motorsport BMW, the M4 serving a stop/go for the collision and finishing down in ninth – behind the Steller Audi and the Assetto Motorsport Ginetta G56, which started strongly with Charlie Robertson, but faded as Mark Sansom’s relative lack of wet-weather experience proved its undoing.

The final round – the #DoningtonDecider – takes place at, you might have guessed it, Donington Park in just over a month’s time on October 16&17 where the GT3 title will go down to the wire with a handful of teams set to do battle. 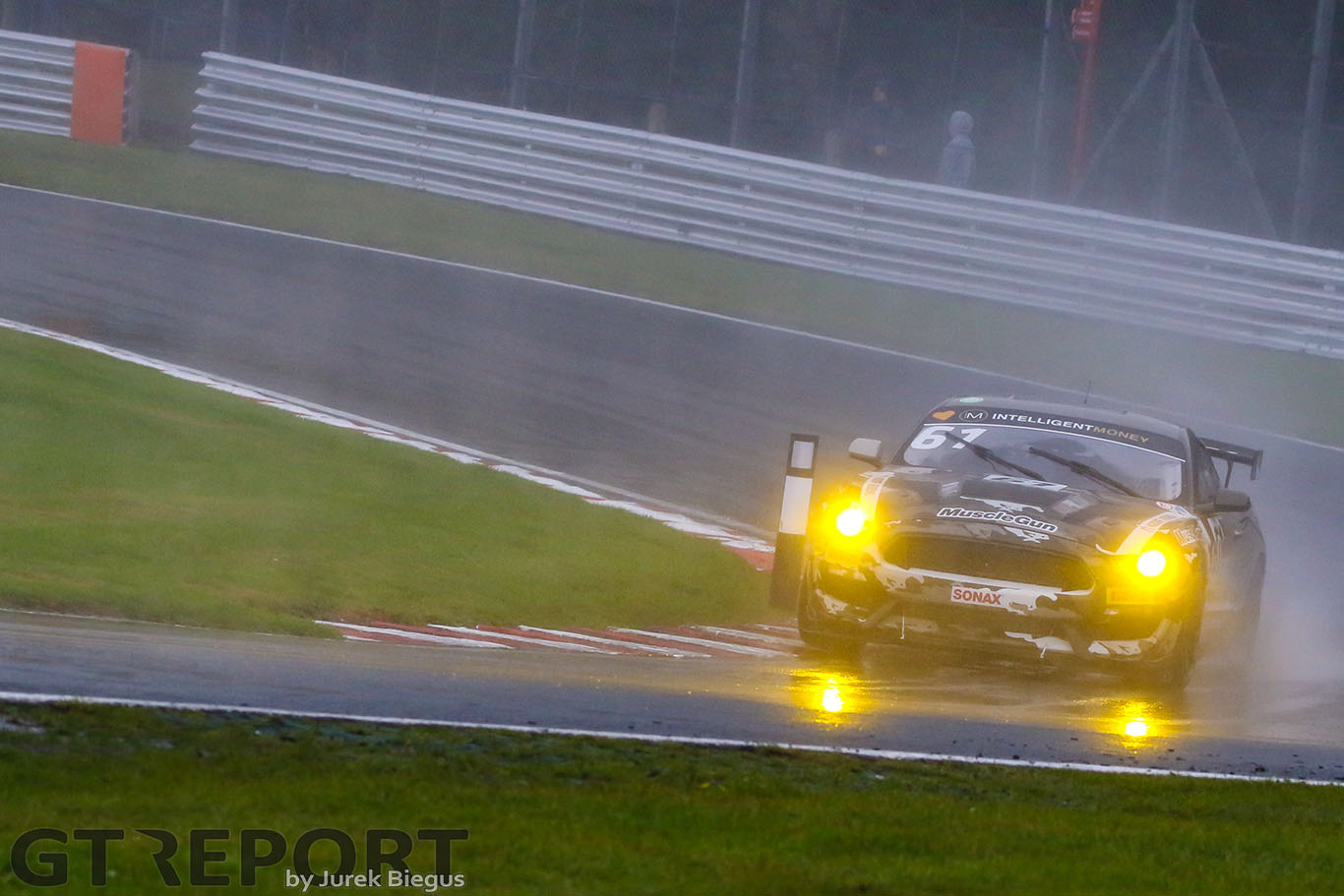 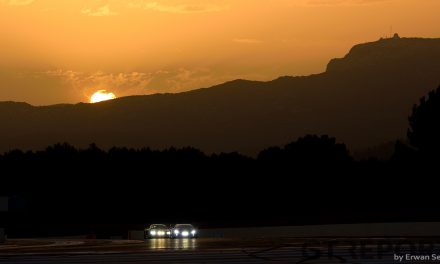 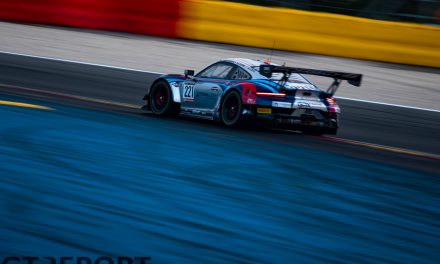 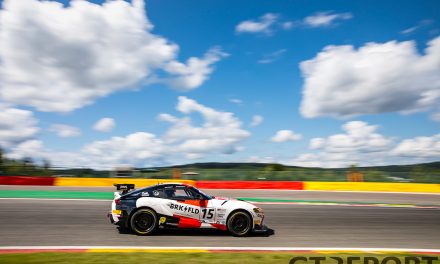