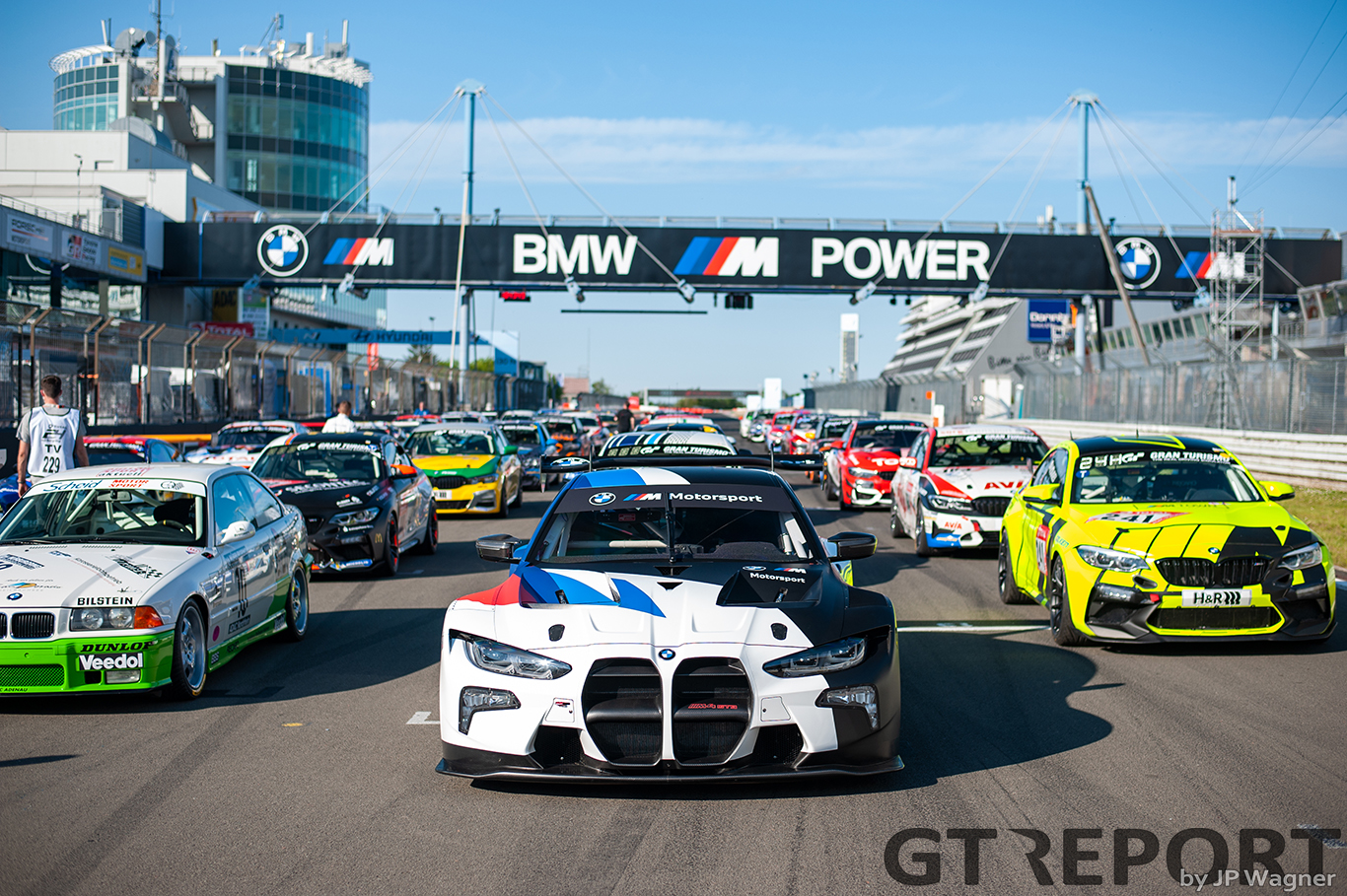 BMW M Motorsport has finally released the final product of the new for 2022 BMW M4 GT3 after many months of testing.

The long-awaited replacement for the venerable M6 GT3 (which debuted in 2016) is built to the latest 2022 GT3 regulation created by the FIA GT Commission. These are understood to not be as radical a departure from the 2016 regulations were from the previous 2012 regulation which relied on the significant use of production car components. This explains why many manufacturers will be producing Evo kits for current GT3 (2016 regulation) platforms for the purpose of equivalency.

The M4 sees BMW return to its most famous GT/Touring car platform – as the M3 previously championed the small two-door car for the marque, before a model renumbering saw the M4 become the two model and the M3 become the name for 4-doors. BMW’s first official GT3 car – the short wheelbase the Z4 – was very nimble, and some operators say overly so. This led BMW to shift to the longer wheelbase M6 GT3 for platform stability. This stability philosophy remains with the M4 GT3, which despite the seemingly smaller base platform, is actually dimensionally larger than the M6 it replaces.

As the first insight to the 2022 regulations, the M4 offers some view into what might lay ahead from other manufacturers. 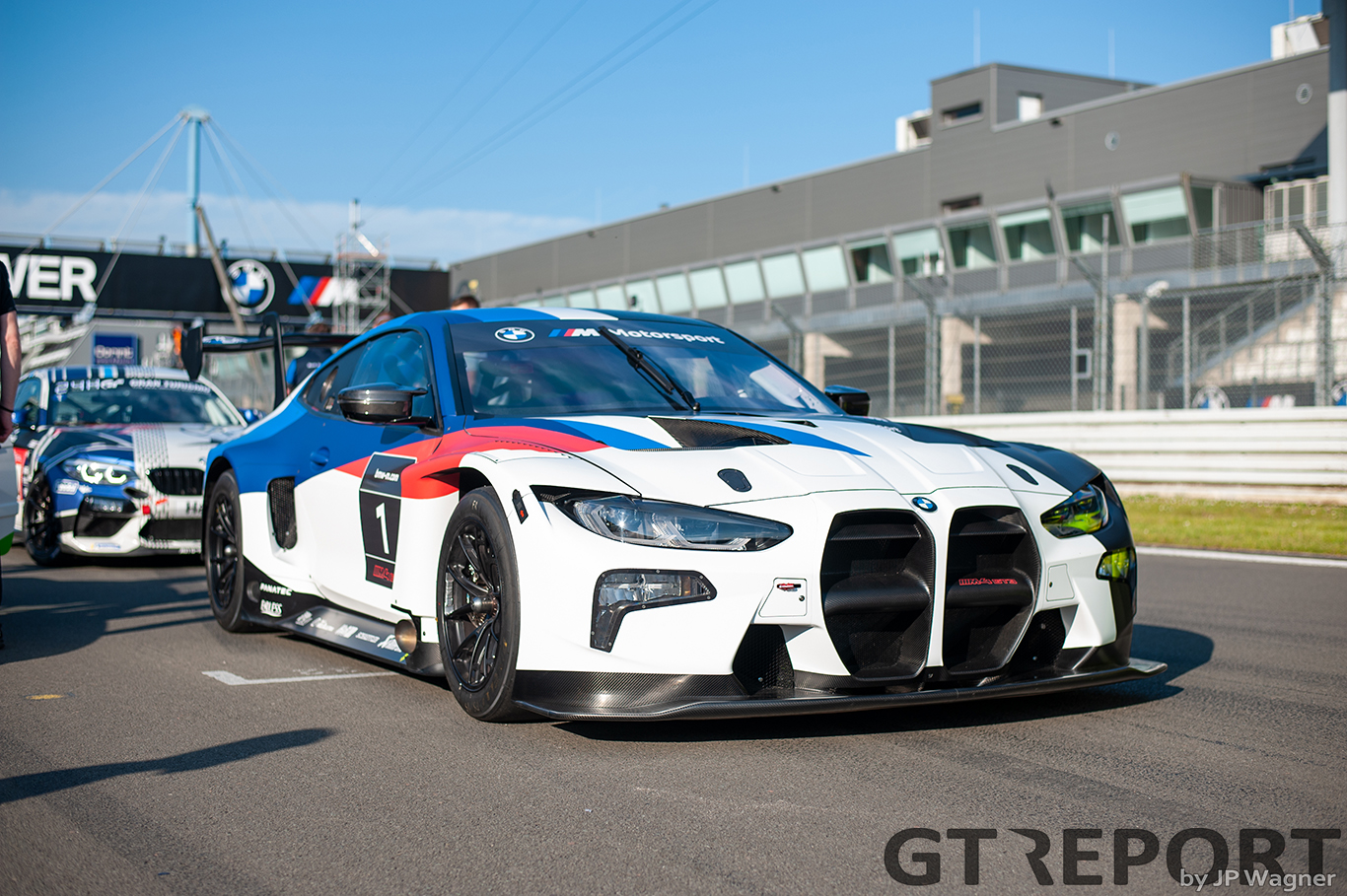 Notably, in line with existing homologated GT3 models, the chassis is significantly (150mm overall) widened via external body work (in carbon fibre) to accommodate wider racing tyres. Within these flared dimensions a number of racing-specific cooling vents have been provided, notable around the front headlight surrounds and on the side of the car, just prior to the rear wheel. In the case of the front headlights’ vents – this may be to vent air over the front tyres to assist in aerodynamics within the wheel well before spilling out through large tunnels behind the front wheels. The rearward side ducts are likely for rear brake cooling.

At the front of the car, a new oversized BMW ‘kidney’ grille dominates the nose. The large grille is split into 3 sections but will mainly serve the engine radiator (laid angular) and intercoolers for the 3.0 litre straight-six turbocharged engine. Air enters towards the bottom of the nose grille and vent out over the car via large tunnels that dominate the bonnet. On the bonnet, other small NACA ducts serve elements such as cockpit ventilation. Front wheel arch vents are also provided to allow for turbulent air to escape. 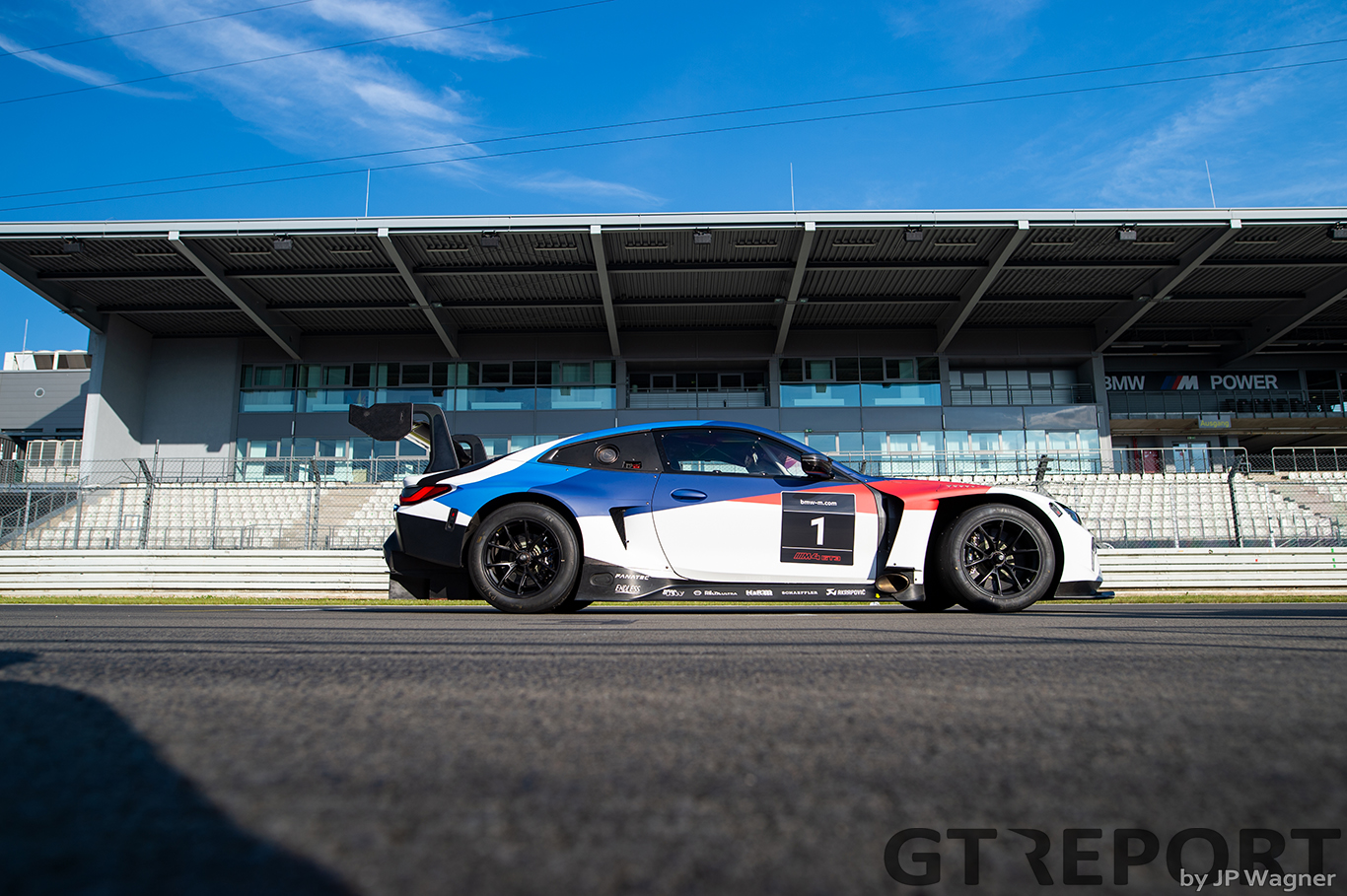 The aforementioned new engine marks a departure from the M6’s turbo V8 – and a return the spiritual six-cylinder engine configuration the M3/M4 is famous for (albeit with forced induction). It can produce 582 bhp (430kW) of power. It is relocated as far back and low as possible in the engine bay to optimize weight distribution.

Aerodynamic features include a straight-forward front splitter with a wide central raised section breaking the horizontal plane created at its outer edges. This splitter dictates how fast and how much airflow is sent into the engine and under the car. There are no fancy vertical fences for controlling airflow (yet), and it is also important to note the absence of aerodynamic ‘flicks’ on the front corners of the car which have been the standard on GT3 cars for some time. This may represent a return to simpler aerodynamics for 2022 GT3 – indeed it are these small aerodynamic components that are the first things to break off during contact while racing. This would reduce the replacement costs to operators. 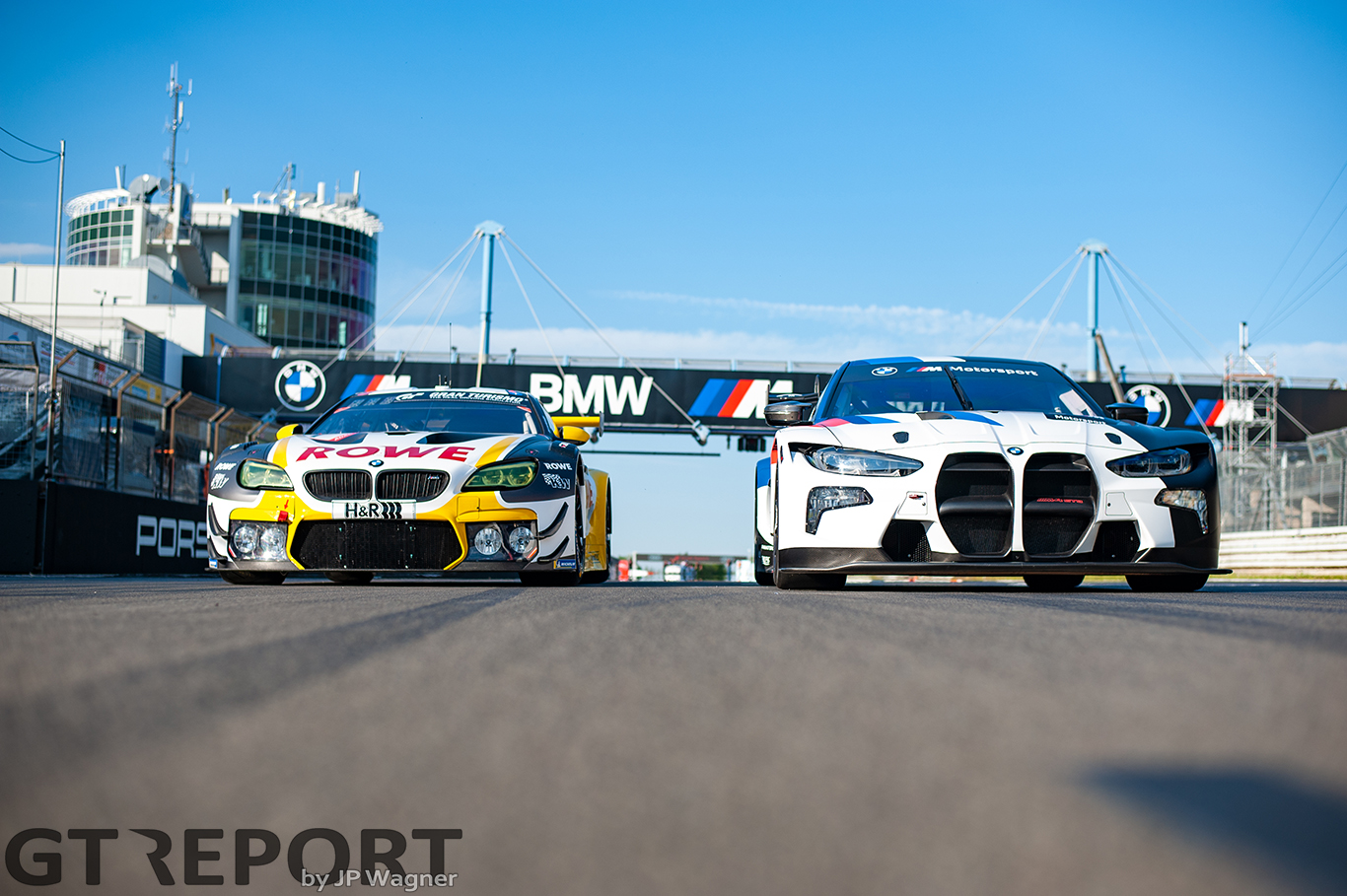 However, one cannot say that because of the absence of small elements that the new M4 GT3 is not highly detailed. The level of aerodynamic research performed shows in the rear of the car. A large swan-neck mounted rear wing with central raised chord almost spans the full width of the car, and has been CFD-modelled to pair to the cars’ 3 tunnel rear diffuser that pulls air from the flat floor.

The interior is still very much on par with current GT3 models – with F1 style steering wheel (by Fanatec) and Bosch racing displays.

In line with the previous specification an, FIA grade roll cage, helmet hatch and safety equipment such as dual nets and extinguishers are accommodated.

Overall, the new M4 GT3 is a very clean new design that appears to be a very well-balanced package that has reduced both purchase costs (at 415,000 euro the car is 4,000 euro less than its predecessor) and operating costs versus the outgoing BMW M6 GT3, as well as provide consistency in lap times – a big plus for GT3 customers. 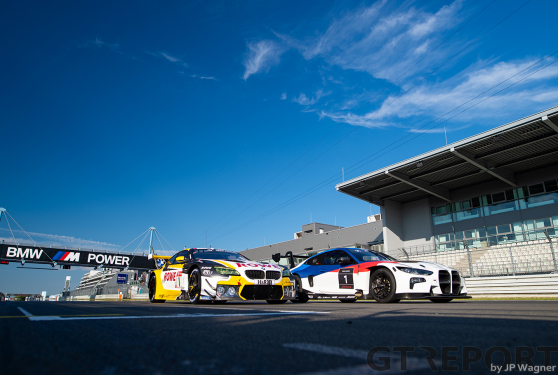 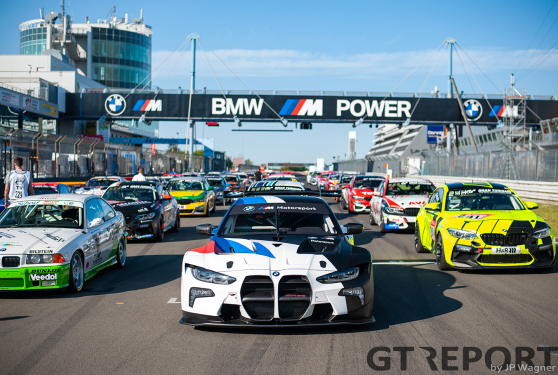 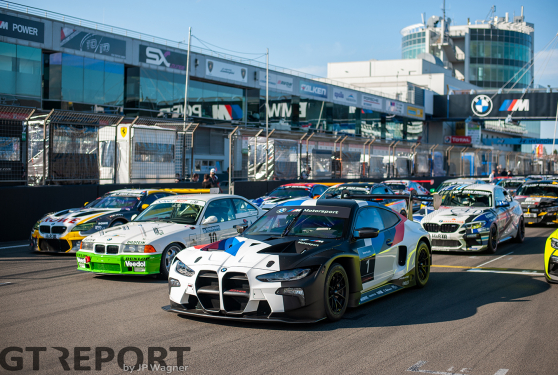 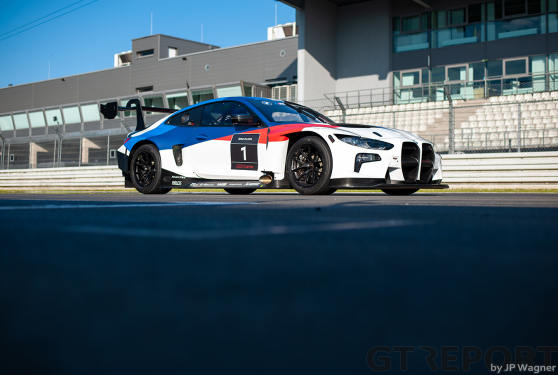 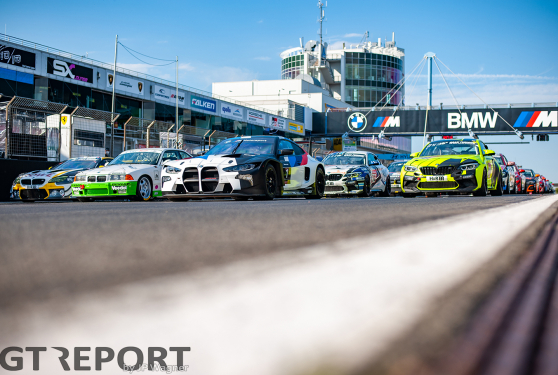 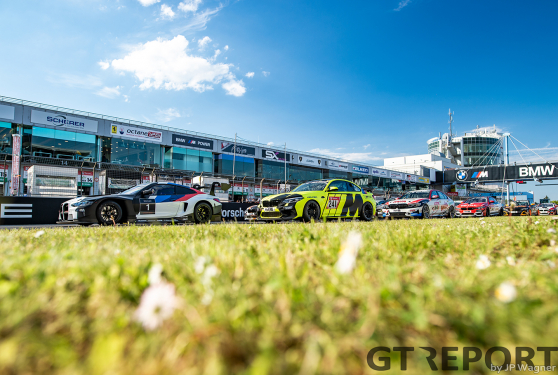 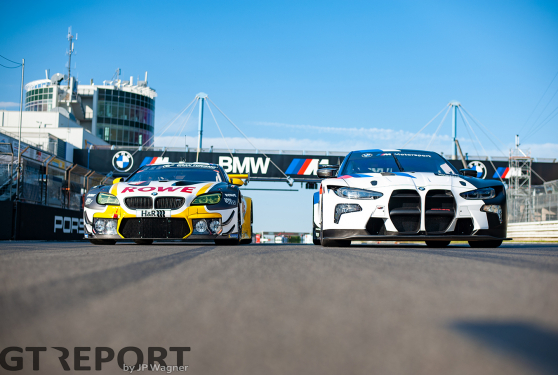 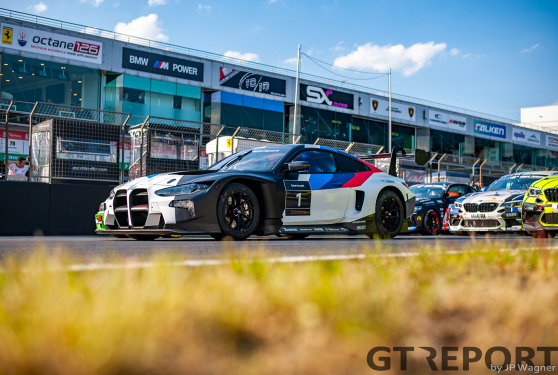 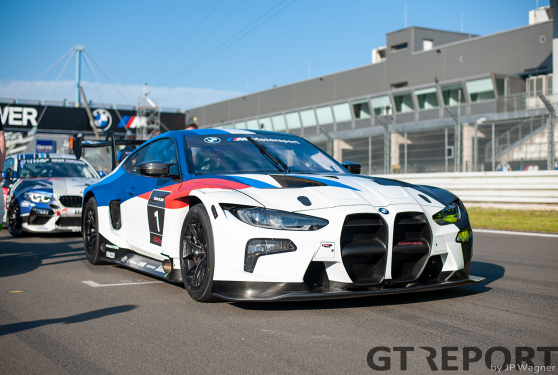 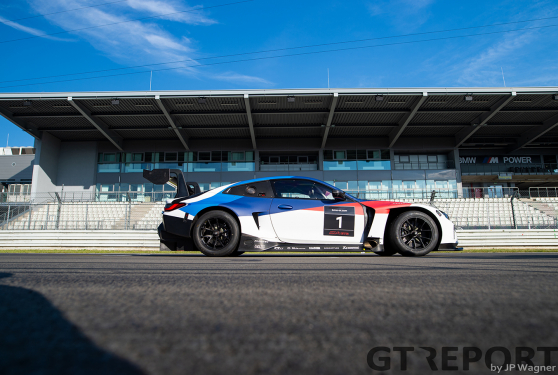