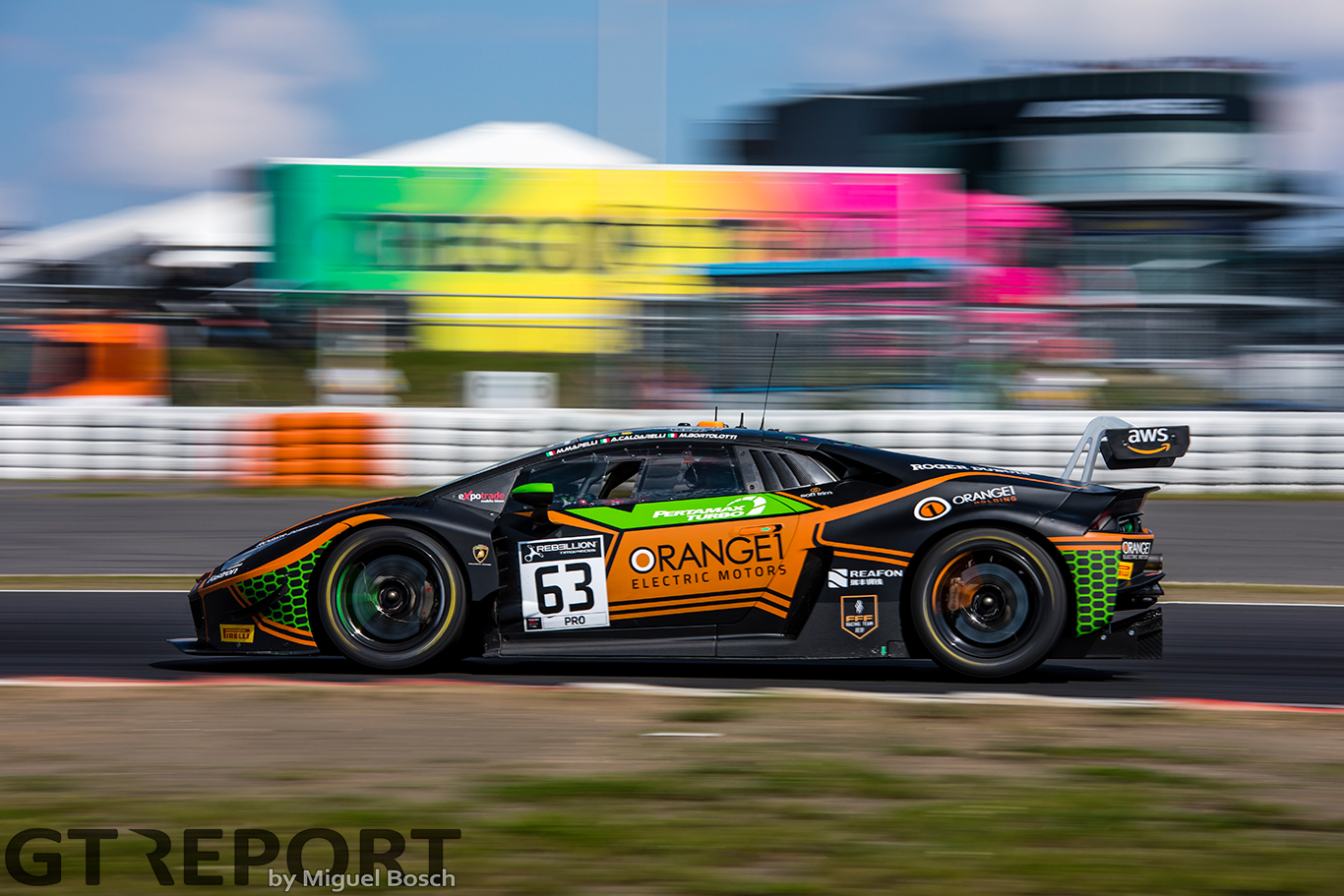 It was a lights to flag victory in the Fanatec GT World Challenge Europe powered by AWS for the #63 Orange1 FFF Racing Team Lamborghini Huracán GT3 of Marco Mapelli, Andrea Caldarelli and Mirko Bortolotti. The team made an emphatic return to form following a difficult season that has shown much promise but has been thwarted by technical gremlins.

Two late safety cars made the result look tighter than it was with just 1.2 seconds covering first and second however before that Bortolotti was busy extending the 34 second lead that Mapelli and Caldarelli had built up in their stints.

Meanwhile, the #32 Team WRT Audi of Dries Vanthour and Charles Weerts whilst only finishing sixth overall, did enough to claim the overall combined championship title. 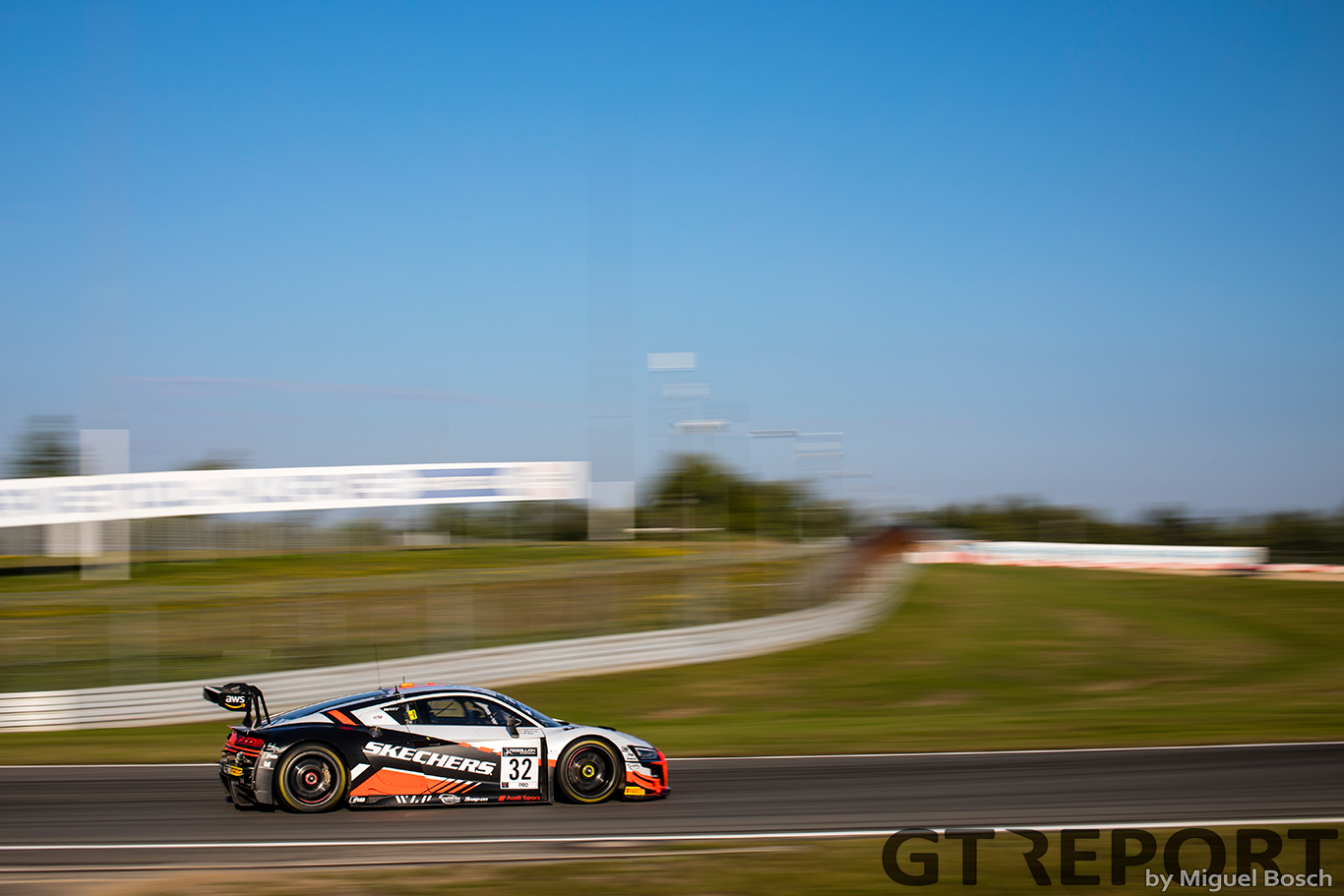 At the start a clean run from all the cars at the front of the grid saw everyone get away with little drama and resulted in the top three keeping their places and only Luca Stolz dropping a single place to give fourth place to fifth place starter Konsta Lappalainen in the #114 Emil Frey Racing Lamborghini Huracán GT3. 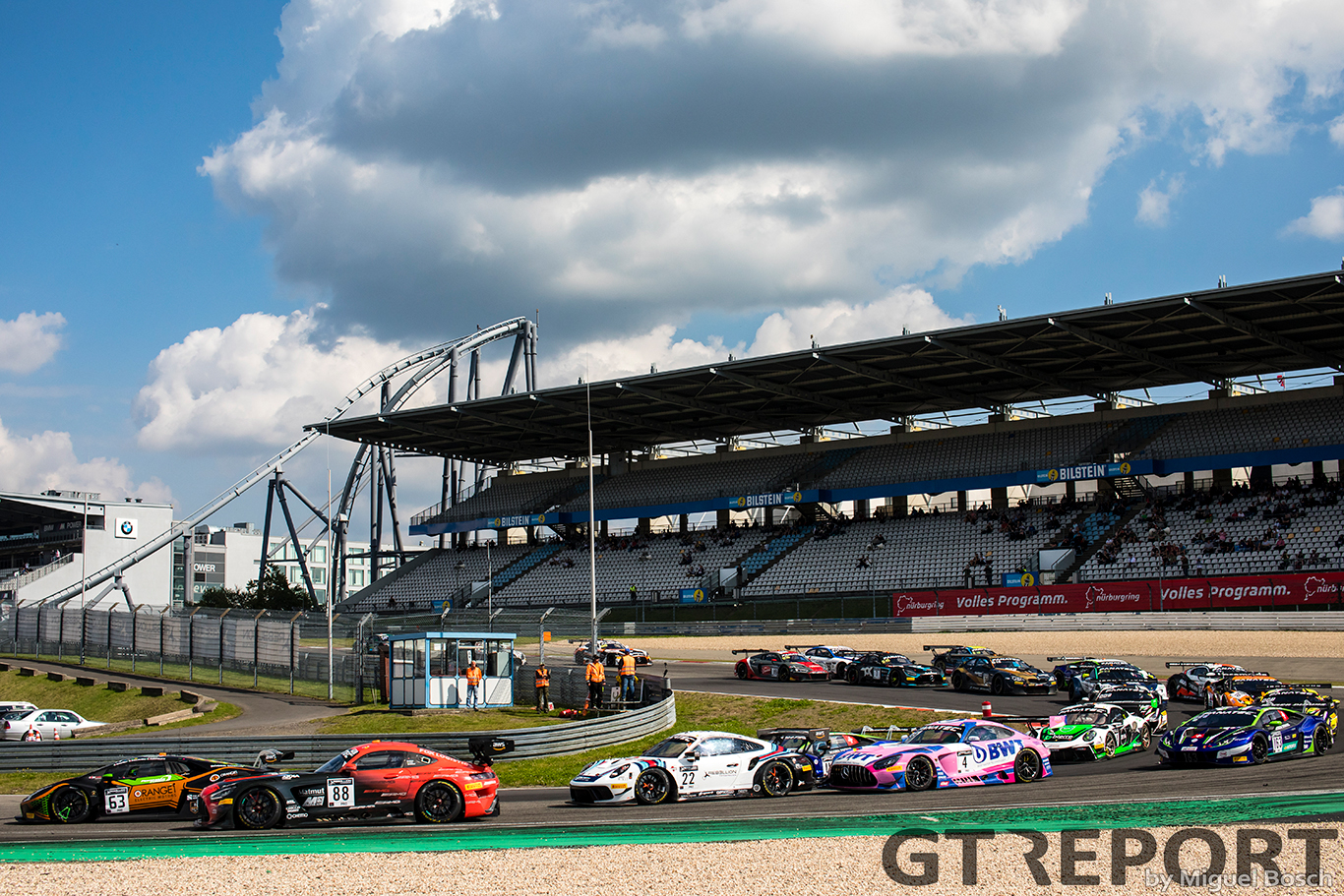 Further back in the field, contact at turn 4 between Alexander West in the #188 Garage 59 Aston Martin Vantage AMR GT3 and the #77 Barwell Motorsport Lamborghini Huracán GT3 on the opening lap resulted in a 10-second penalty for the Aston Martin team. This was followed by a nudge from #7 Toksport WRT Mercedes-AMG GT3 to the #14 Emil Frey Lamborghini of Rolf Ineichen at turn 3 which also drew a 10-second penalty for the #7 crew.

At the first pit stops the #63 FFF Lamborghini was over 3 seconds ahead of the chasing #88 AKKA ASP Mercedes-AMG GT3 of Raffaele Marciello, Felipe Fraga and Jules Gounon. Andrea Caldarelli took over in the #63 from Marco Mapelli and a solid out lap kept him well ahead of the #88 which stopped one lap later.

Felipe Fraga had taken over in the #88 AKKA ASP Mercedes from Endurance Cup title challenger Raffaele Marciello but was  held up on his out lap when he exited the pit lane behind the #93 Sky Tempesta Ferrari 488 GT3 which, with Rino Mastronardi behind the wheel, was trying to hold off the #20 of Dominik Baumann in the #20 SPS Automotive Performance Mercedes-AMG GT3 for the lead in Pro-Am. 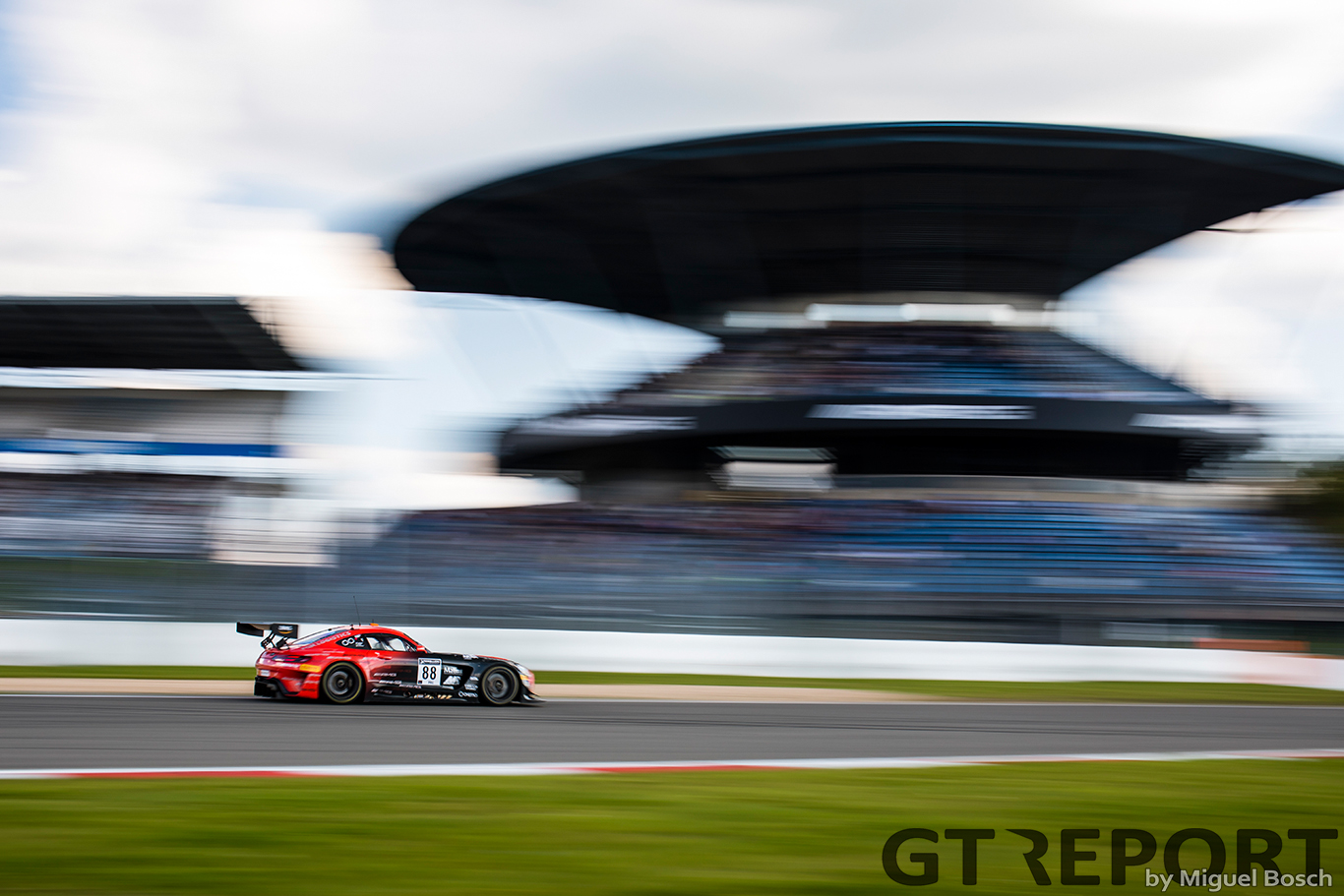 It took Fraga most of the lap to get around Mastronardi, leaving him some 7 seconds behind Caldarelli whilst Baumann also benefitted, able to slip past the Ferrari into the first turn, continuing on to end his stint leading the Pro-Am class.

At the front, Caldarelli didn’t need any extra help and by the middle part of his stint had stretched the lead to 17 seconds whilst Fraga squabbled with Maro Engel in the #4 Haupt Racing Team Mercedes-AMG GT3 for second.

At the final stops Bortolotti took over the #63 Lamborghini and with 45 minutes remaining had an advantage of 34 seconds until a full course yellow that evolved into a safety car period saw the hard work dismantled. This brought Jules Gounon in the #88 to within 3.2 seconds of the leader, but with five back markers separating the two, the advantage was still with Bortolotti. At the restart the Italian was away early, knowing that Gounon would need to wait until crossing the start line before he could start passing the cars in front.

It wasn’t to be that easy for the Italian and a second full course yellow occurred within a few laps of the restart after Antonio Fuoco in the #71 Iron Lynx Ferrari 488 GT3 found  the barrier at the Schumacher Esses closely followed by the #22 GPX Porsche 991.2 GT3R of Mathieu Jaminet which narrowly missed tagging the stricken Ferrari. This meant another safety car start, this time with just one car separating Bortolotti and Gounon for the final 15 minute sprint. 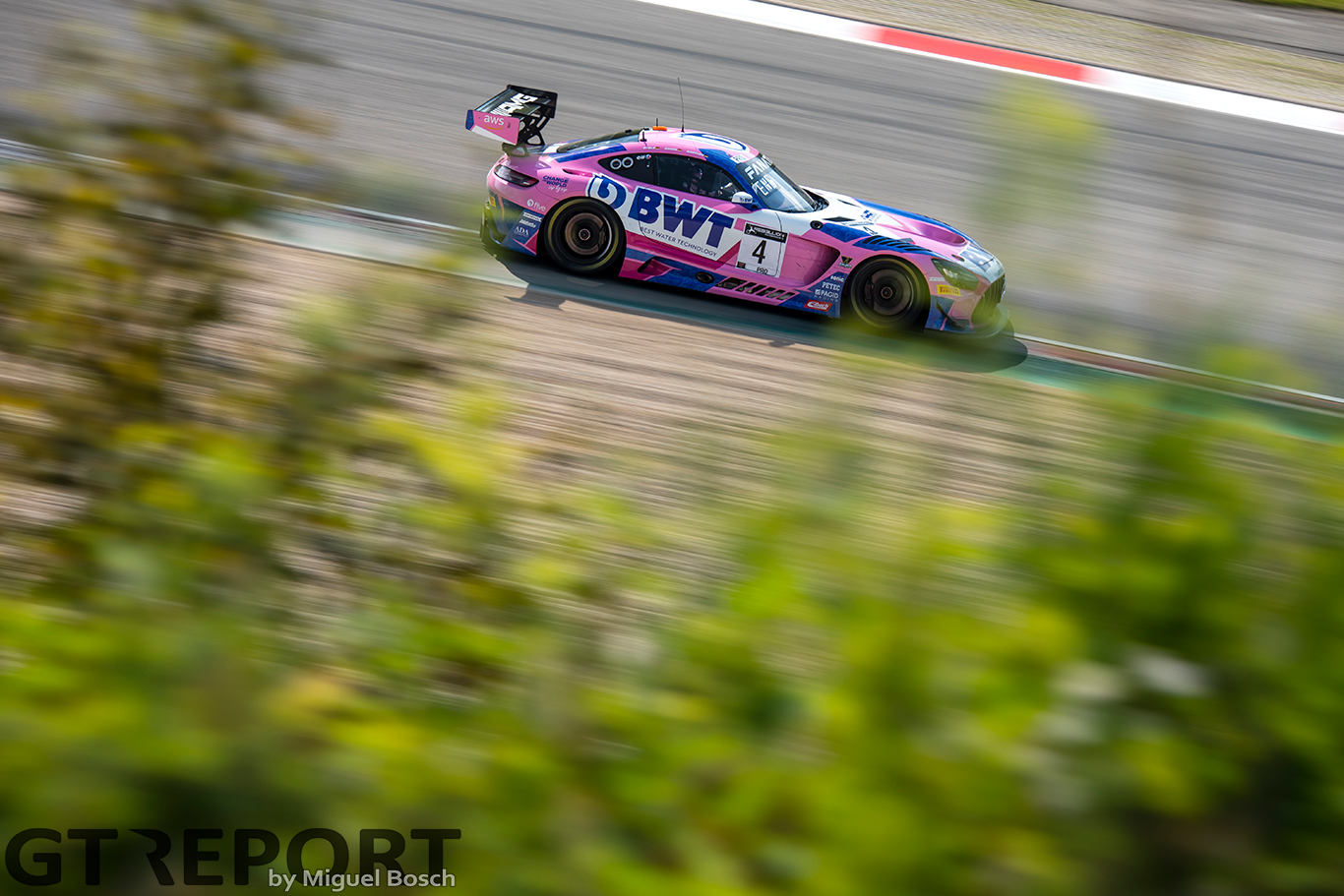 Again, Bortolotti went early but back marker Rik Breukers in the #90 Madpanda Motorsport Mercedes-AMG GT3 kept with him allowing Gounon to stick on his tail and clear the Mercedes into the first corner.

Bortolotti, however, was up for the challenge and managed the gap between himself and Gounon to take the chequered flag just 1.2 seconds ahead of the Mercedes.

After the race, Bortolotti was happy that the team got the right result.

“Finally we managed to get the result we deserved, I’m really happy with this, it’s the result of hard work and great work throughout the weekend and I’m really proud of this,” the Italian said.

The pressure to maintain the lead in the final laps was just routine for the experienced Italian racer.

“Jules is one of the fastest GT3 drivers out there so you always have to be on your toes trying not to make any mistakes. The smallest mistake will be taken by your opponent, it doesn’t matter who it is but I’m really happy that we got to bring it home because I think we deserved to win today.”

Following the safety car start there were also position changes further down the field. In Pro-Am, Fabian Schiller in the #69 RAM Racing Mercedes-AMG GT3 made a bold move into turn 5 to steal the lead from Phil Keen in the second #19 Orange1 FFF Racing Team Lamborghini. 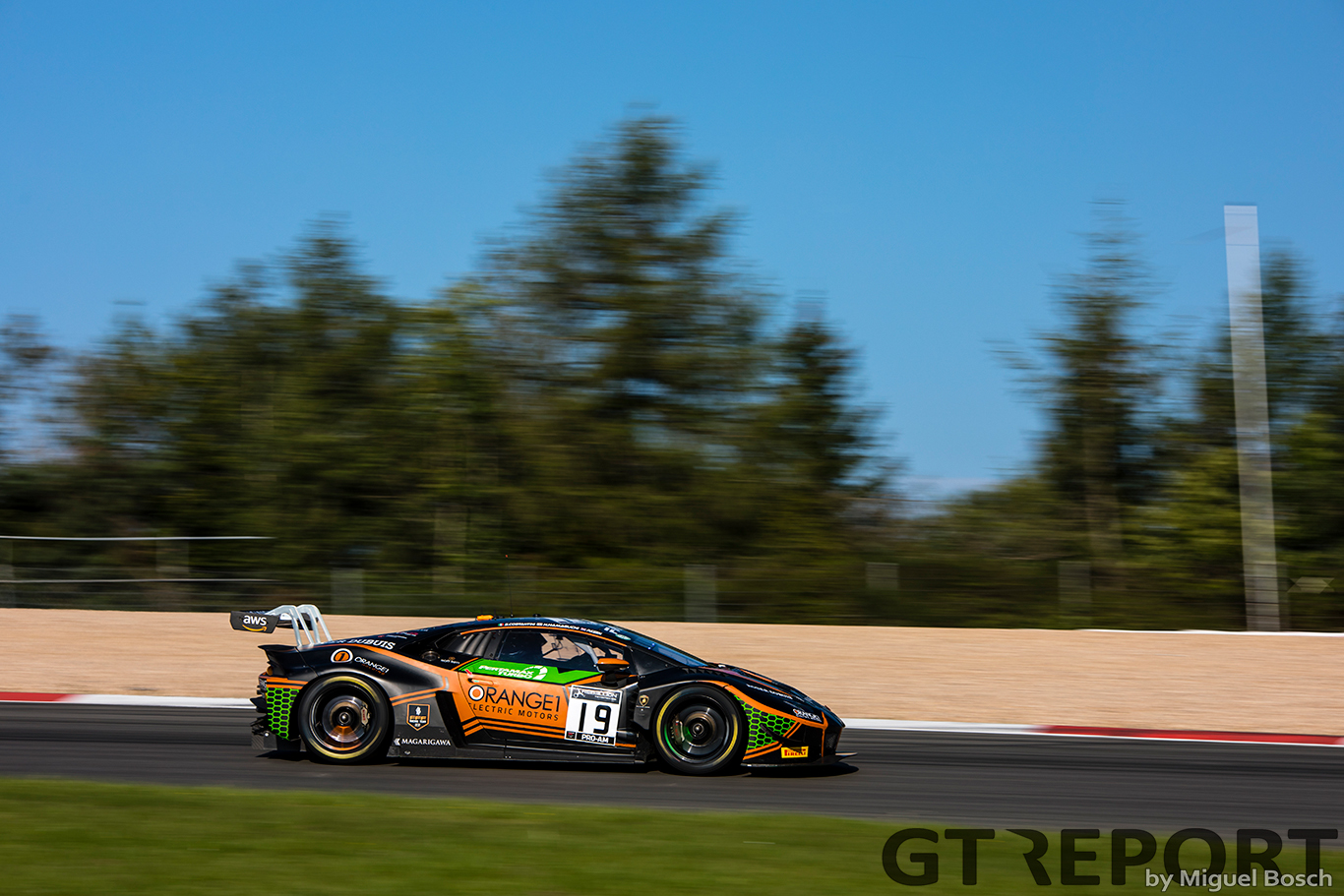 Keen had backed off to allow one of the leaders to get past but then fell victim to Schiller. Unfortunately for Schiller, a slow Porsche at the Schumacher-S put him onto the marbles and into the gravel. Keeping the throttle pinned, Schiller was back on track but down to third place in class and in the process giving the lead and victory back to Keen.

Silver Cup victory went to the #14 Emil Frey Lamborghini of Ricardo Feller, Alex Fontana and Rolf Ineichen who recovered from the spin early in the race which cost them a number of places. The win was handed to them in the final laps as a suspension failure for Tim Zimmermann in the leading #16 GRT Grasser Racing Team Lamborghini Huracán GT3 ended their race in the pit lane. 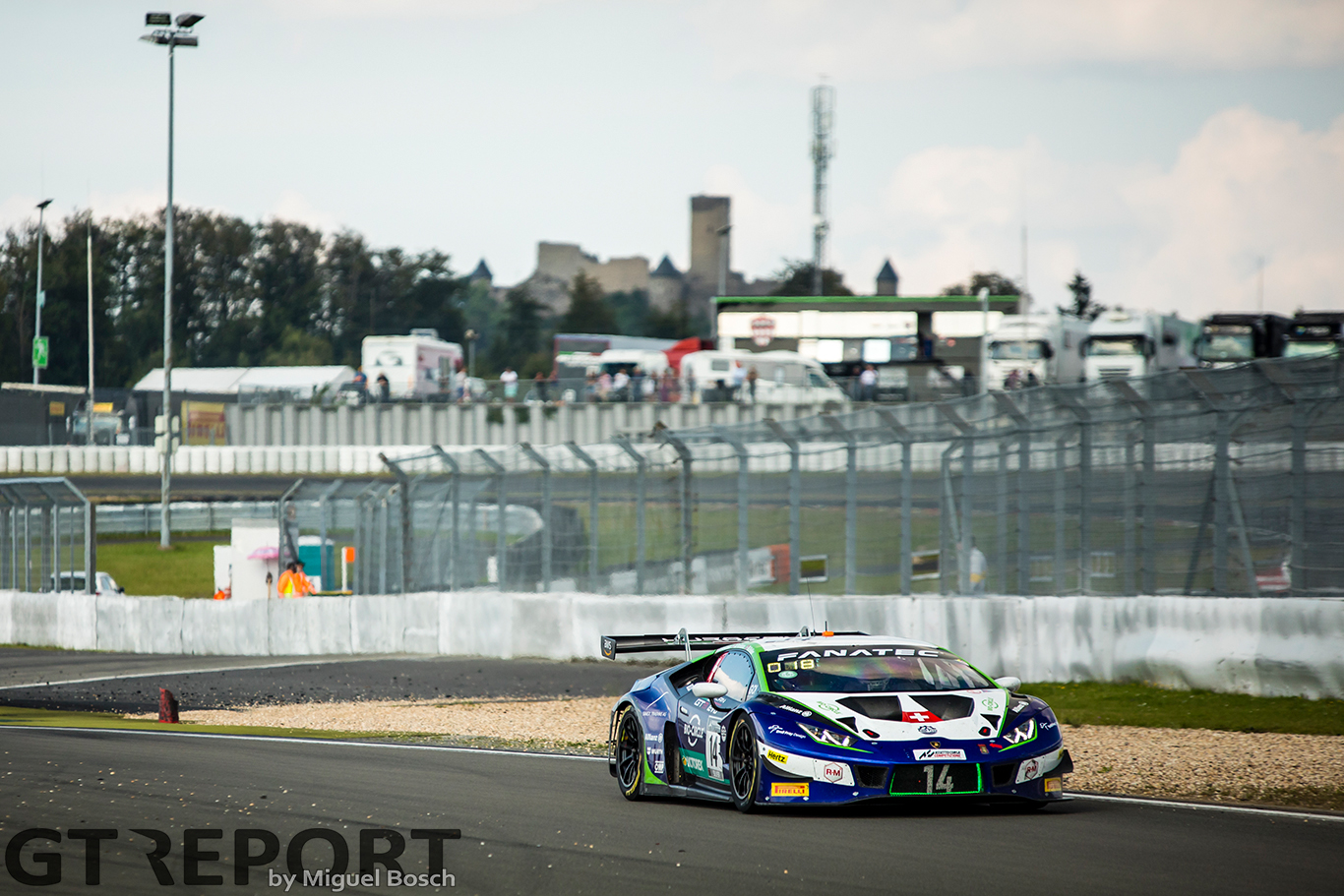 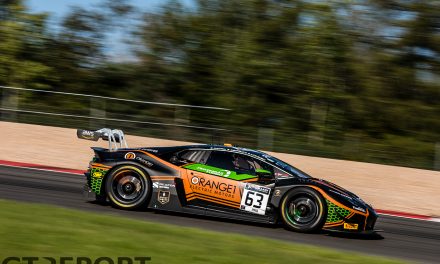