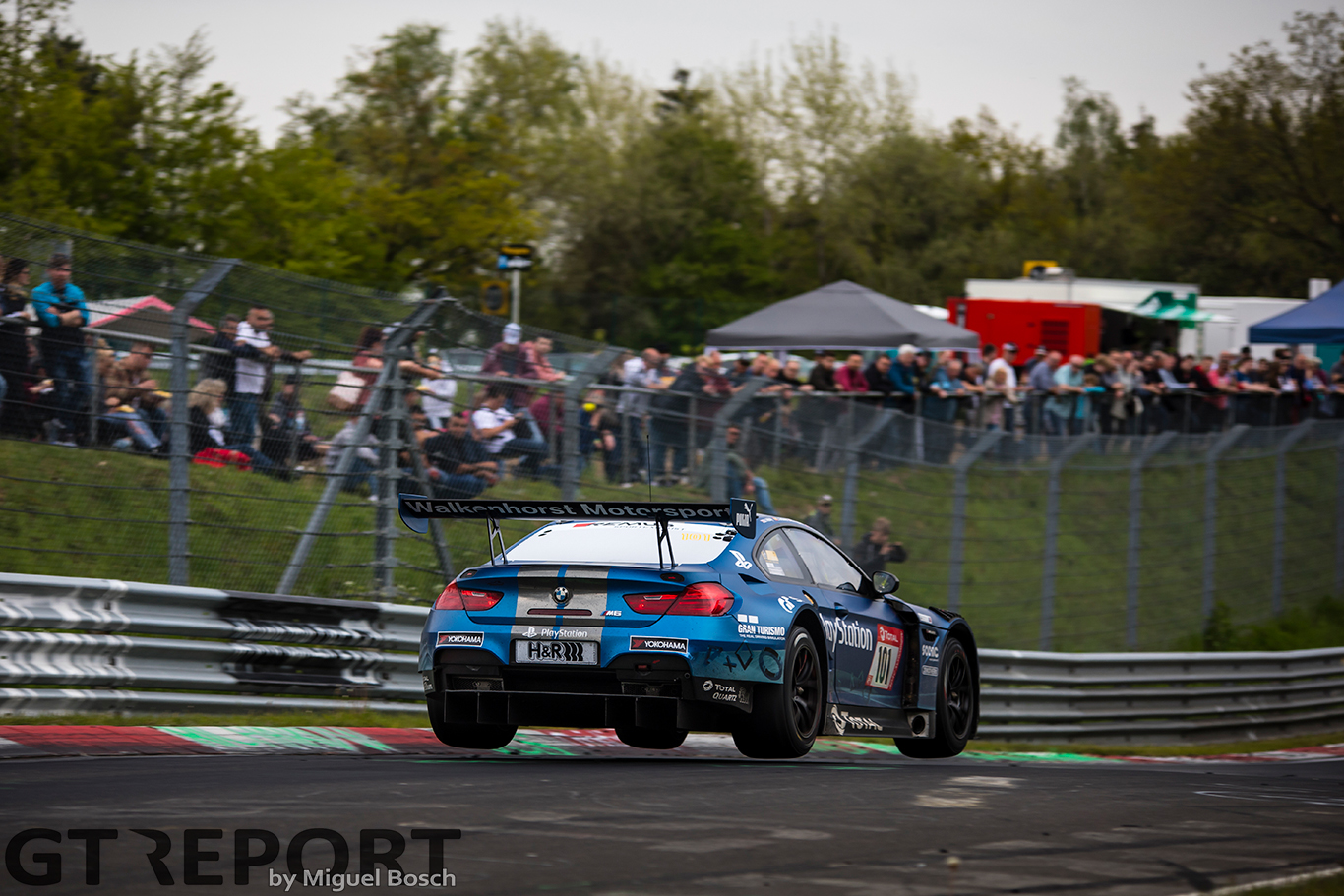 Despite setting the fastest lap in the Top 30 Shoot-out on Sunday morning, Yelmer Buurman would’nt enjoy his position in front of the field for very long. Having started the race on rain tyres on a damp and drying track, the Black Falcon Mercedes-AMG GT3 driver’s life was made unnecessarily hard by a wrong pressure in his Michelin tyres. Unable to resist Marcel Fässler’s attack, the Dutchman let the Phoenix Racing Audi R8 LMS GT3 take the lead before going onto the Nordschleife. 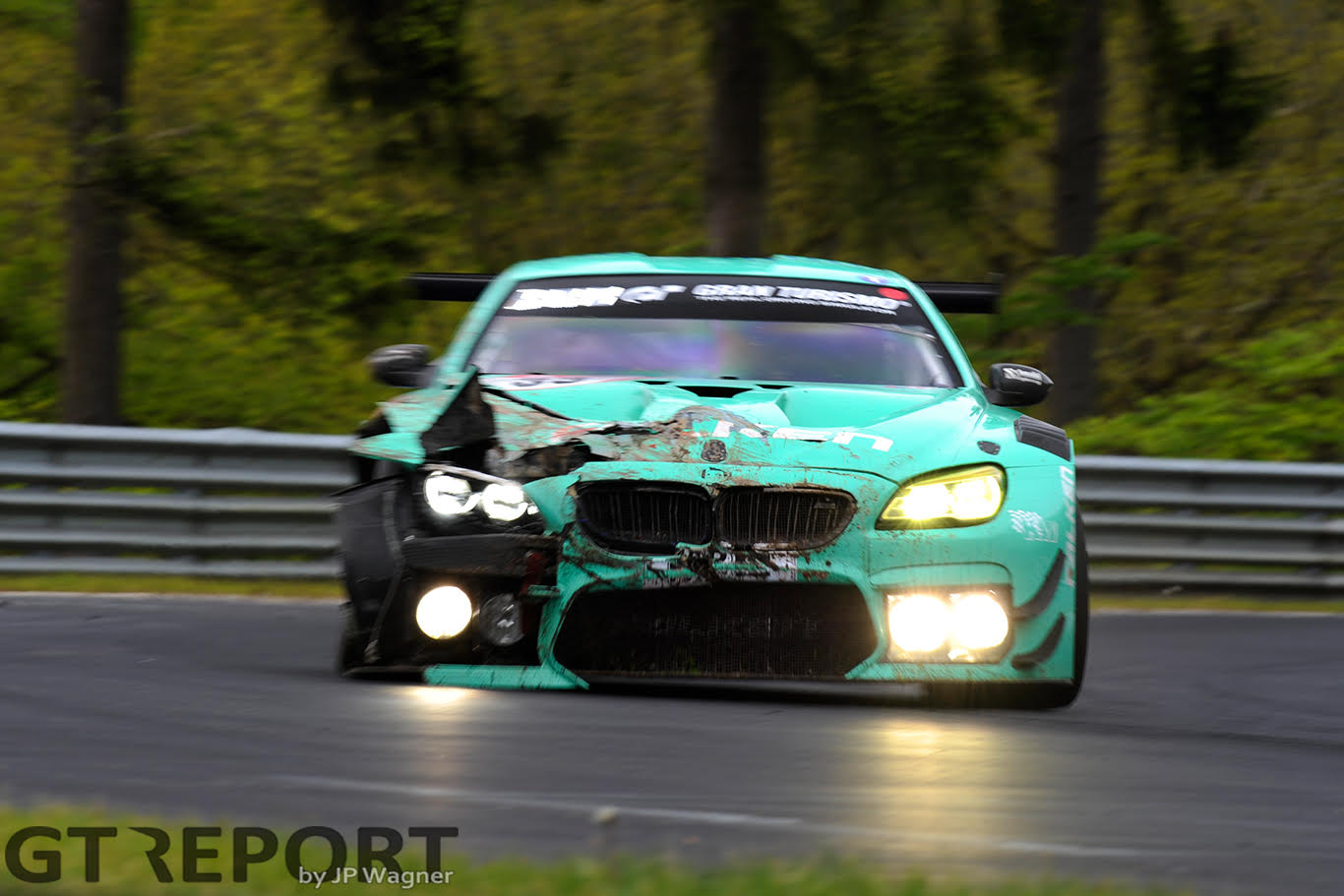 In just a few laps, however, Fässler was swallowed by drivers who started on cut slicks, rather than wet weather tyres. Stef Dusseldorp and Christian Krognes in respectively the #33 Falken Motorsports BMW M6 GT3 and #101 Walkenhorst BMW M6 GT3, stormed to the front on their intermediates as they moved into first and second place.

Even the two BMWs’ cut slicks were quick to wear out. Krognes was the first to blink, asking the team to bring out the slicks after less than half an hour into the race.

Dusseldorp followed into the pits two laps later, handing the lead to the #1 Manthey Racing Porsche 991.2 GT3R. The Falken squad’s attempt ended shortly after Peter Dumbreck took over the BMW. The Brit, surprised by a sudden brake defect, smacked into the barriers at Wehrseifen, severely damaging the car. 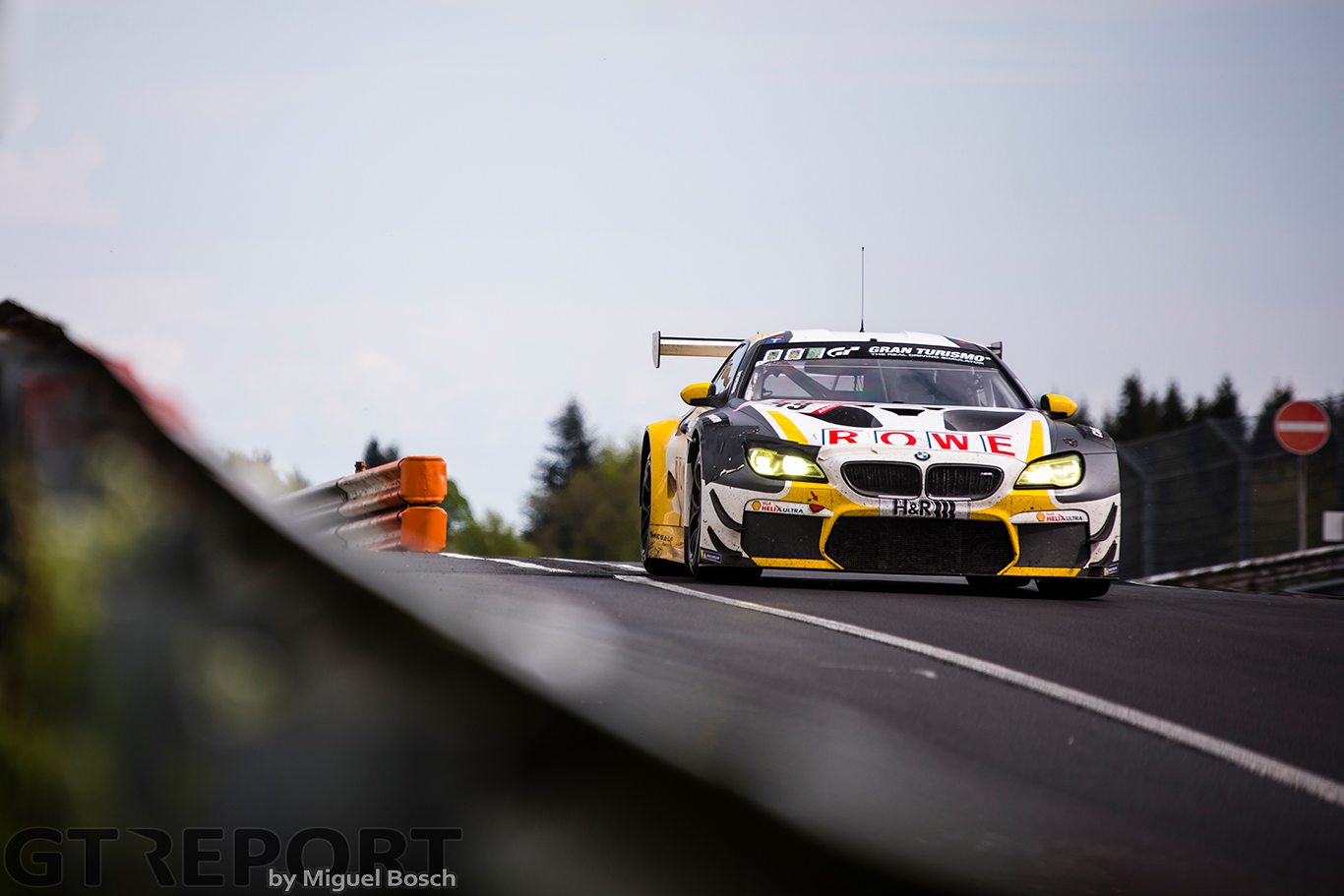 In the hour that followed, the Walkenhorst BMW worked its way back to the front at staggering speed. After a short but fierce battle, Krognes overpowered Fässler and worked his way through a group of cars, picking off Martin Tomczyk (#42 BMW Team Schnitzer M6 GT3), Tom Blomqvist (#98 Rowe Racing BMW M6 GT3) and Alexander Müller (#30 Frikadelli Racing Porsche 991 GT3R) one by one. When he returned to the pits to hand over to Nick Yelloly, Walkenhorst was leading the race.

The many tyre compounds and strategies the teams started the race with led to a carrousel of leaders. Besides the #33 Falken BMW, #101 Walkenhorst BMW, #4 Phoenix Audi and #1 Manthey Porsche, the #911 Manthey Porsche and #99 Rowe BMW also took turns at the head of the field, the latter two taking their row over the final step on the podium to the penultimate lap of the race.

The main fight for the lead erupted in the second half of the race when Rowe and Walkenhorst began exchanging the lead as they cycled through their pitstops. For a long time, it looked like Rowe Racing drivers Jesse Krohn and John Edwards were in the hot seat to take Rowe Racing’s second Nürburgring win of the year. Walkenhorst Motorsport, however, had other plans. Nick Yelloly and David Pittard’s high-paced stints in the middle part of the race brought Krognes within sight of the leader when the Walkenhorst BMW returned to the track for in the final 45 minutes. 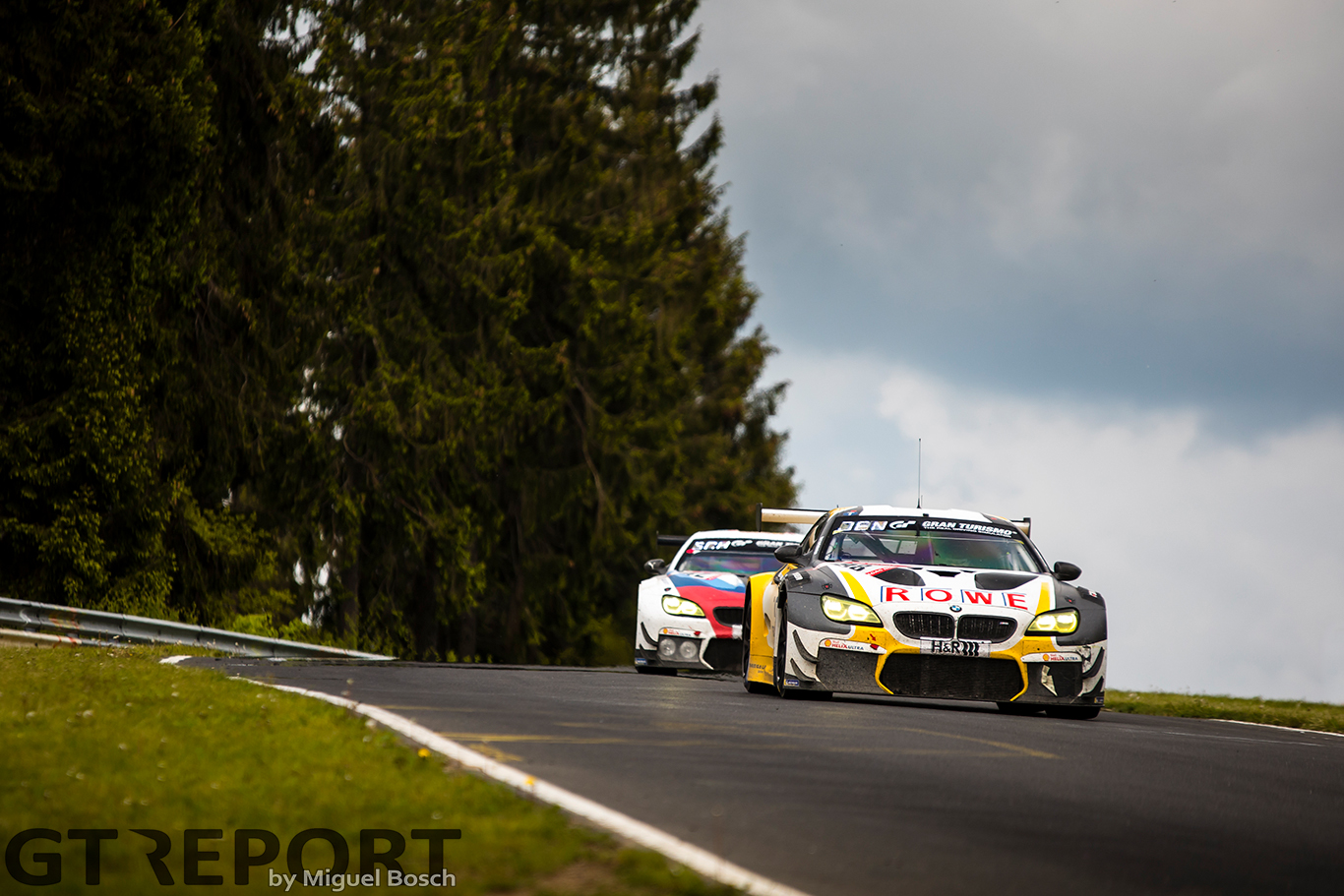 With all pitstops and strategies played out, it was now Krognes versus Krohn. Time ticked away but Krognes closed in rapidly, bridging a gap of over 8 seconds within 25 minutes. Three more laps remained when he found himself on the back of the Rowe BMW. A first attack was thwarted by Krohn, but not the second one a lap later. Knowing the Grand Prix course is the place where his Yokohama-shod BMW is the strongest, Krognes made a decisive move up the inside of Krohn’s BMW going into the Müllenbachschleife. Somewhat helped by a slower car, Krognes grabbed the lead.

Krohn had no answer to the unleashed Krognes, conceding defeat and settling for second.

Like at last year’s Spa 24 Hours, the small Walkenhorst team beat giant Rowe to the win. 12 seconds separated the BMW squads at the finish, followed over the line in a distant third place by the #98 Rowe BMW driven by Connor De Philippi, Tom Blomqvist and Mikkel Jensen who moved up to second place minutes before the end when the #911 Manthey Porsche retired in the pits with a steering issue, making it a BMW triple. 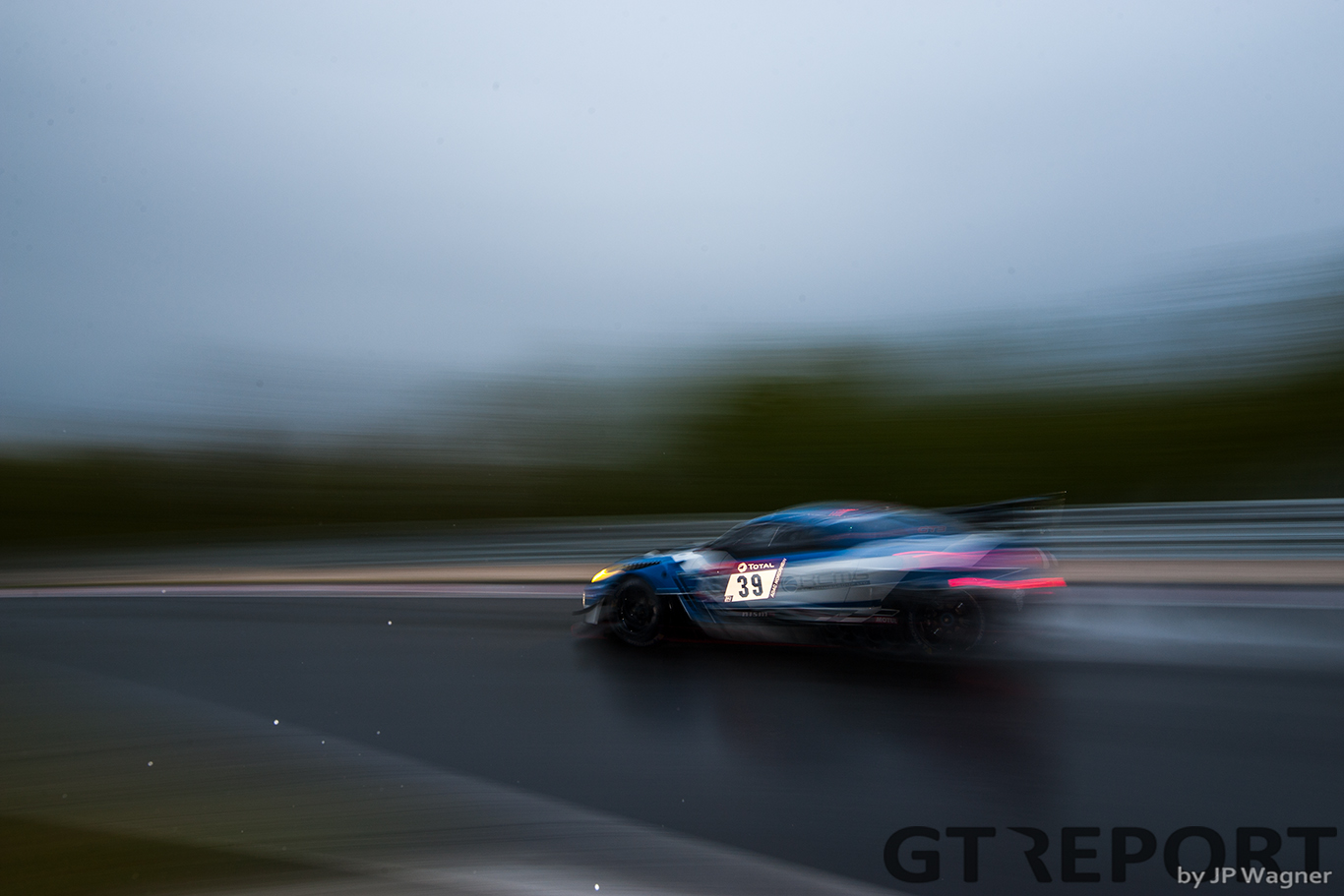