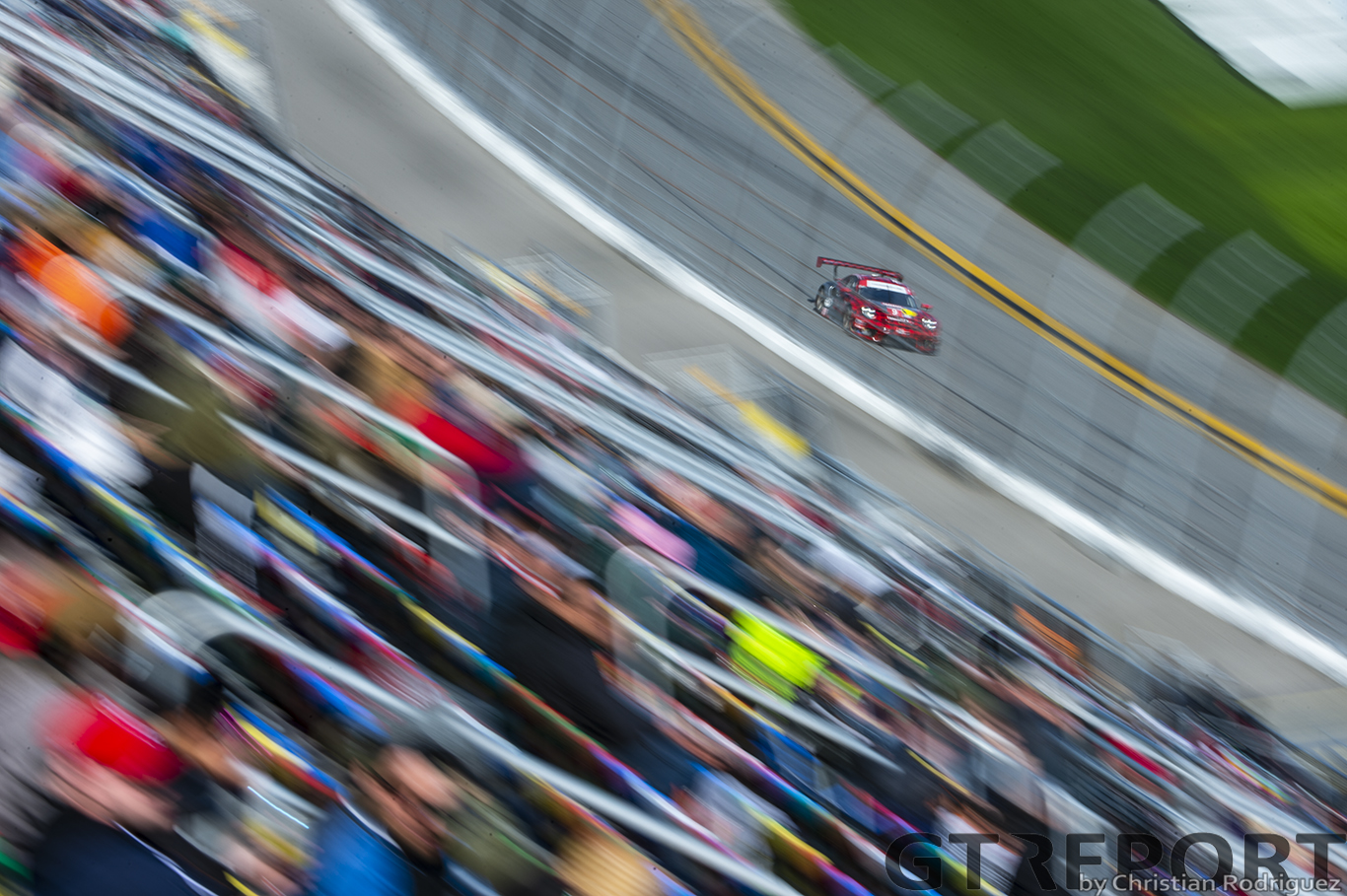 Meyer Shank Racing led the first three hours of the 2022 Rolex 24 at Daytona in a race that was disrupted by two caution periods which caused considerable shuffling at the top of the class.

The IMSA WeatherTech Championship season-opener proved to be a busy affair, with 61 cars fighting tooth and nail for position around the Florida banking. However, some classes showed that teams have already got a solid handle on what they need to win, with familiar faces proving the winter has dampened their skill to dominate their respective categories as the sun started to set.

Kamui Kobayashi wasted no time in firing the Ally Cadillac DPi into the lead of the race, lunging his way past the similar Cadillac Racing entry run by Chip Ganassi Racing to move to the front.

Carving his way through traffic with ease, Kobayashi had a comfy margin over his rivals – helped by a slick stop from his Action Express team in the first round of stops 30 minutes in. 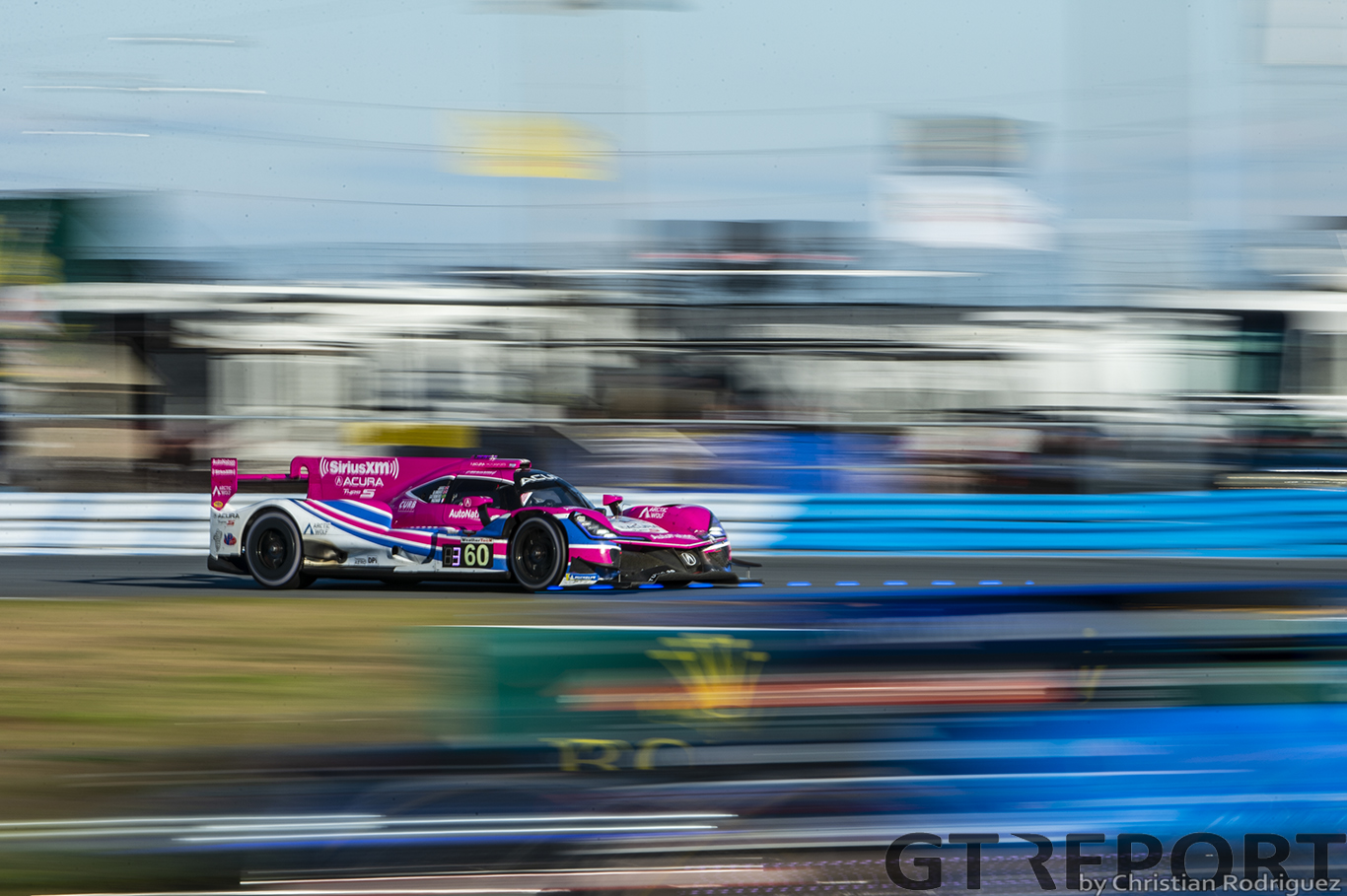 His lead was cut down by the first of two cautions in the opening three hours as Dwight Merriman crashed out going into Turn 6. The Era Motorsport driver seemed to lose the back-end of his LMP2 ORECA going into Turn 6 and crashed into the wall. He was unhurt, but a track marshal had to be taken to hospital with an injury sustained in the incident – thankfully, they are reported to be in a stable condition.

Once the race went green again, Kobayashi resumed his position at the front. Handing over to Jose Maria Lopez, the team’s domination at the front continued, until the 21hour 40min mark when he went was shoved in the rear into the fast Turn 1 and slipped down to fifth.

Misfortune for one Cadillac was a bonus for another, as Renger van der Zande inherited the lead in the #01 Cadillac Racing machine. He held on until the end of the third hour, when a slightly different pit strategy moved the Acura DPi of Meyer Shank Racing to the head of the class.

Also at the sharp-end of the field was the second Acura of Wayne Taylor Racing, which was mixing it with the #31 Whelen Engineering-sponsored Cadillac. 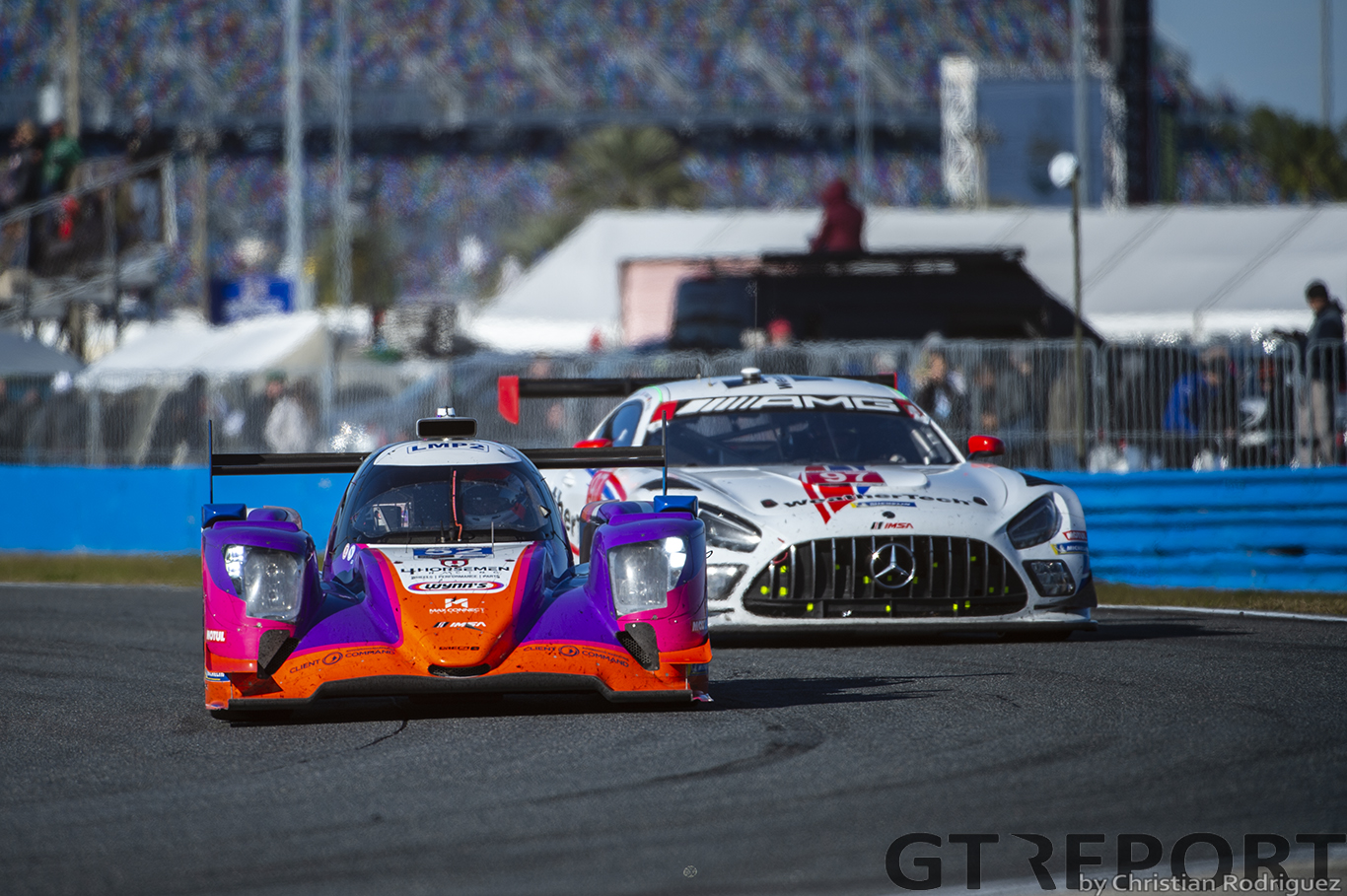 PR1 Mathiasen Motorsports dominated the secondary prototype class, with Ben Keating & Mikkel Jensen very much picking up where they left off in 2021 by dominating proceedings.

Keating took the start and moved into the lead as pole-sitting John Falb was pinged for a drive-through for jumping the start. The #52 crew did drop out of the lead for a time at the second round of pitstops at the end of the opening hour as they elected to swap Keating for Jensen and the High Class Racing ORECA chose to keep Dennis Andersen behind the wheel.

Jensen didn’t take long to move back up into the lead, and led all the way to the end of the third hour. His team-mate in the sister car, Josh Pierson, proved PR1 has good pace all-round as the sportscar debutant moved up into second in the #11.

G-Drive Racing by APR finished the opening stint in third and fourth, with the #69 recovering from Falb’s opening lap penalty to move into class contention with Tijmen van der Helm behind the wheel. The #68 of Oliver Rasmussem lies in fourth, with Rinus VeeKay fifth for Racing Team Nederland.

Riley Motorsport controlled proceedings in the LMP3 category, with Gar Robinson taking the most of the chaos caused by the first caution to vault ahead of Jarett Andretti in the Andretti Autosport Ligier JS P320.

Pit cycles allowed the #26 Muehlner Motorsport Duqueine to move ahead for a time, but the pure pace on display from the Riley team allowed Robinson to move back ahead at the end of the third hour, which was curtailed by a second lengthy caution period for a big crash involving the GMG Racing Porsche being driven by Kyle Washington who went off-track at the entry to the Western Horseshoe. He thankfully got out fine, but neutralised what was a decent spell of green flag racing.

Andretti laid second at the end of the opening period, with Sean Creech Motorsport in third – thanks to some great stints from Daytona veteran João Barbosa to keep the Ligier just six seconds behind the lead battle. 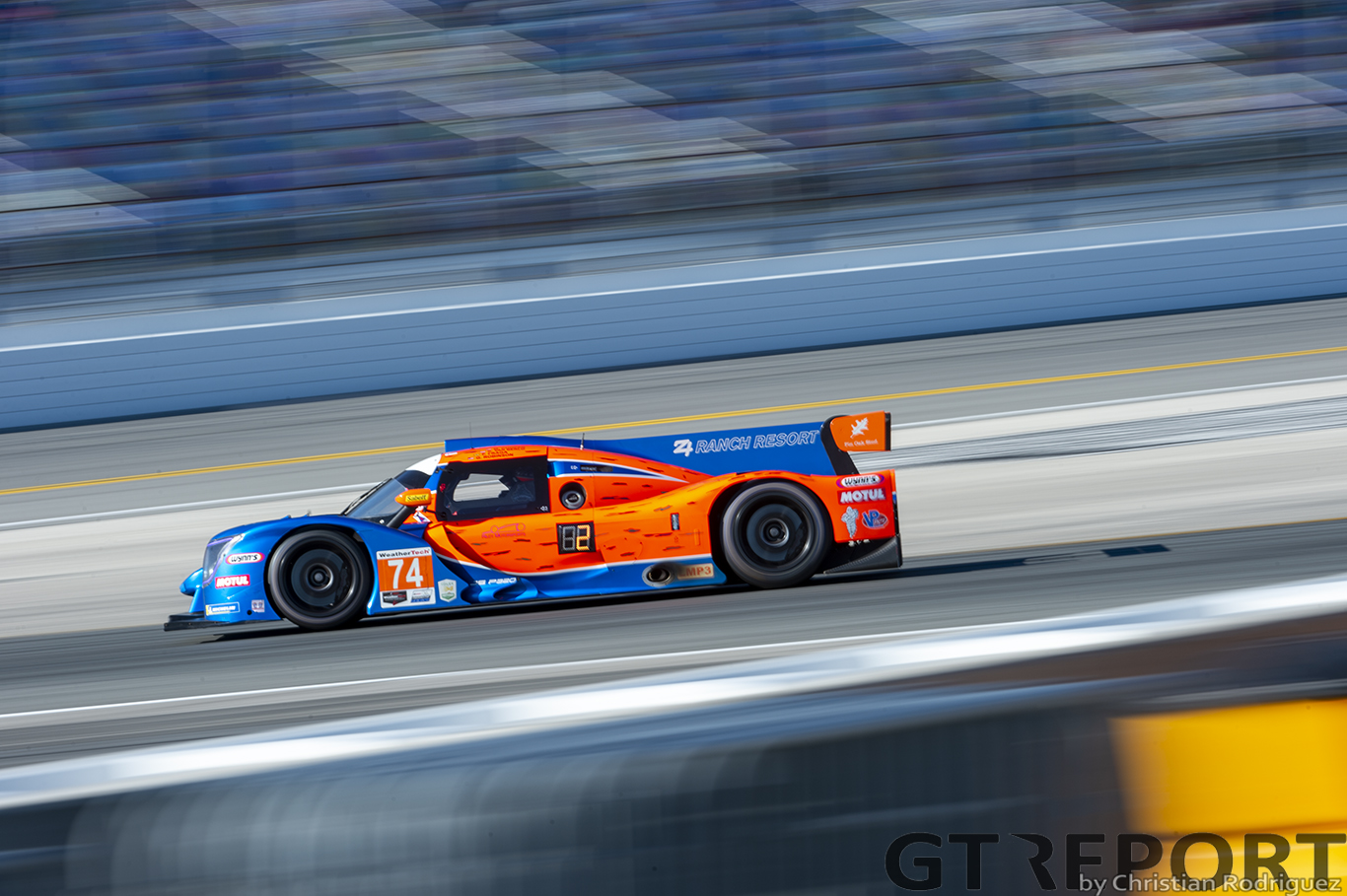 Of the all the action in the field, it was the GT classes where the battling was strongest. The joy of GTD Pro and GTD having the same BoP meant that both classes mixed in together – the main differentiator being whether a Pro or an Am was behind the wheel.

That meant, for a time, the Crucial Racing McLaren 720S GT3 being driven by Jon Miller led the way in the GT-based classes. It didn’t last for too long though, as the experience of the Pro and factory drivers started to tell and the class started to split with GTD Pro storming ahead.

At the sharp-end was Pfaff Motorsport with Mathieu Jaminet demonstrating why he’s such a solid racer in a Porsche as he held a slender lead over Kyle Kirkwood & Ben Barnicoat in the VasserSullivan Lexus RC F which had a great run – unlike the sister car in the GTD class. Caught blind by a spinning Roberto Lacorte in the Cetilar Ferrari, Frankie Montecalvo couldn’t move away quick enough and was caught on the rear-left as the Ferrari rolled back.

Back in GTD Pro, and Corvette Racing moved into a strong position with the #4 spearheaded by Nick Tandy just over two seconds ahead of Antonio Garcia’s #3. Ross Gunn rounded out the top five with a typically solid display in the Heart of Racing Aston Martin Vantage GT3. 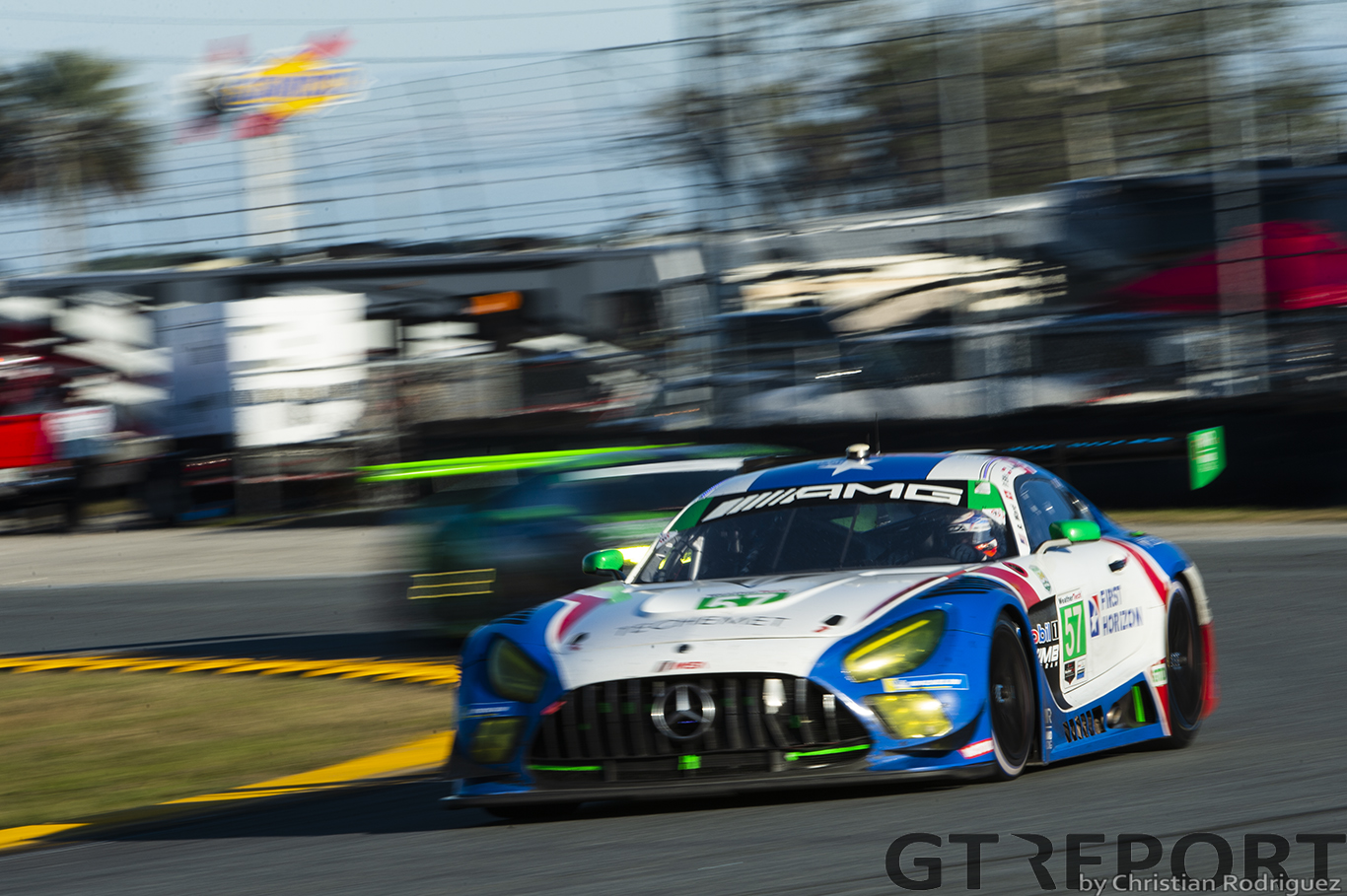 In the predominantly Pro/Am GT3 class, it was just as competitive. As the above mentioned Miller faded away slightly as the race went on, the main beneficiary was 2020 British GT Champion Sandy Mitchell in the CarBahn with Peregrine Racing Lamborghini Huracán GT3 Evo.

He showed exactly why he’s been promoted to an official Lamborghini factory driver as he put in a mega stint at the head of the class to hold off the charging Winward Racing Mercedes which, only at the end of the third-hour, finally took the lead with Mikael Grenier behind the wheel executing a great pass on Mitchell.

In third, was the Wright Motorsport Porsche which hasn’t put a foot wrong so far. Indeed, the same could be said for pretty much the entire class, which is nothing short of a miracle considering how busy it is. The only penalties have resulted from crews busting red lights at the end of pitlane.

Debuting its new Aston Martin, Magnus Racing finished the opening three hours in fourth, with Spencer Pumpelly the driver behind the wheel as the clock ticked down to 21 hours remaining. 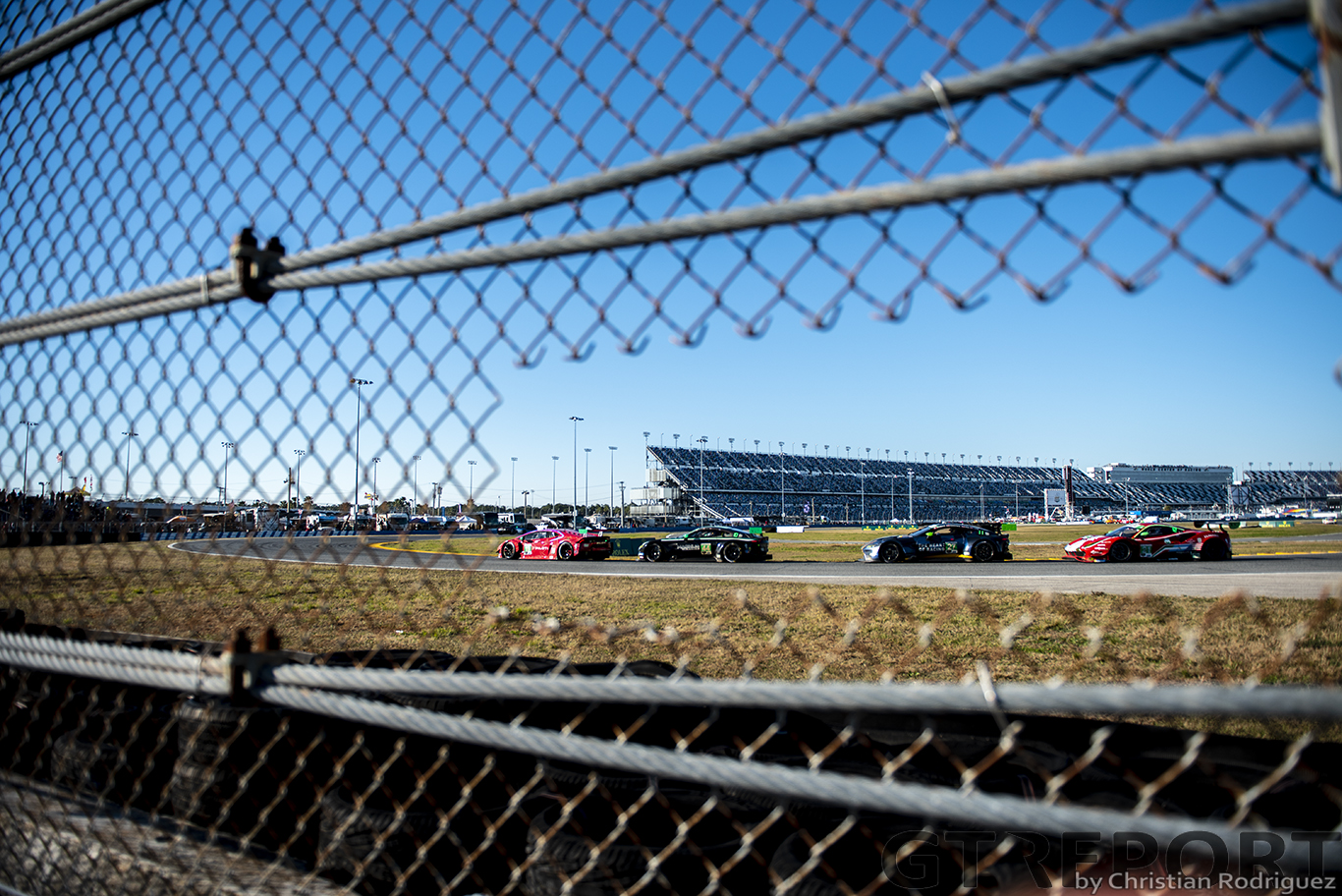 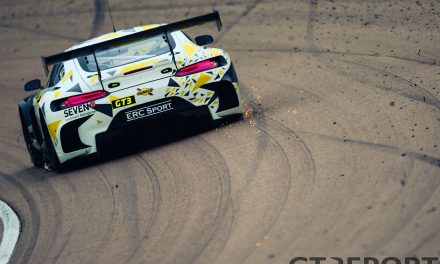 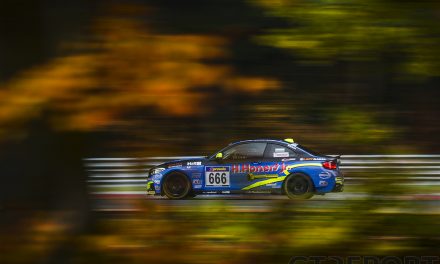