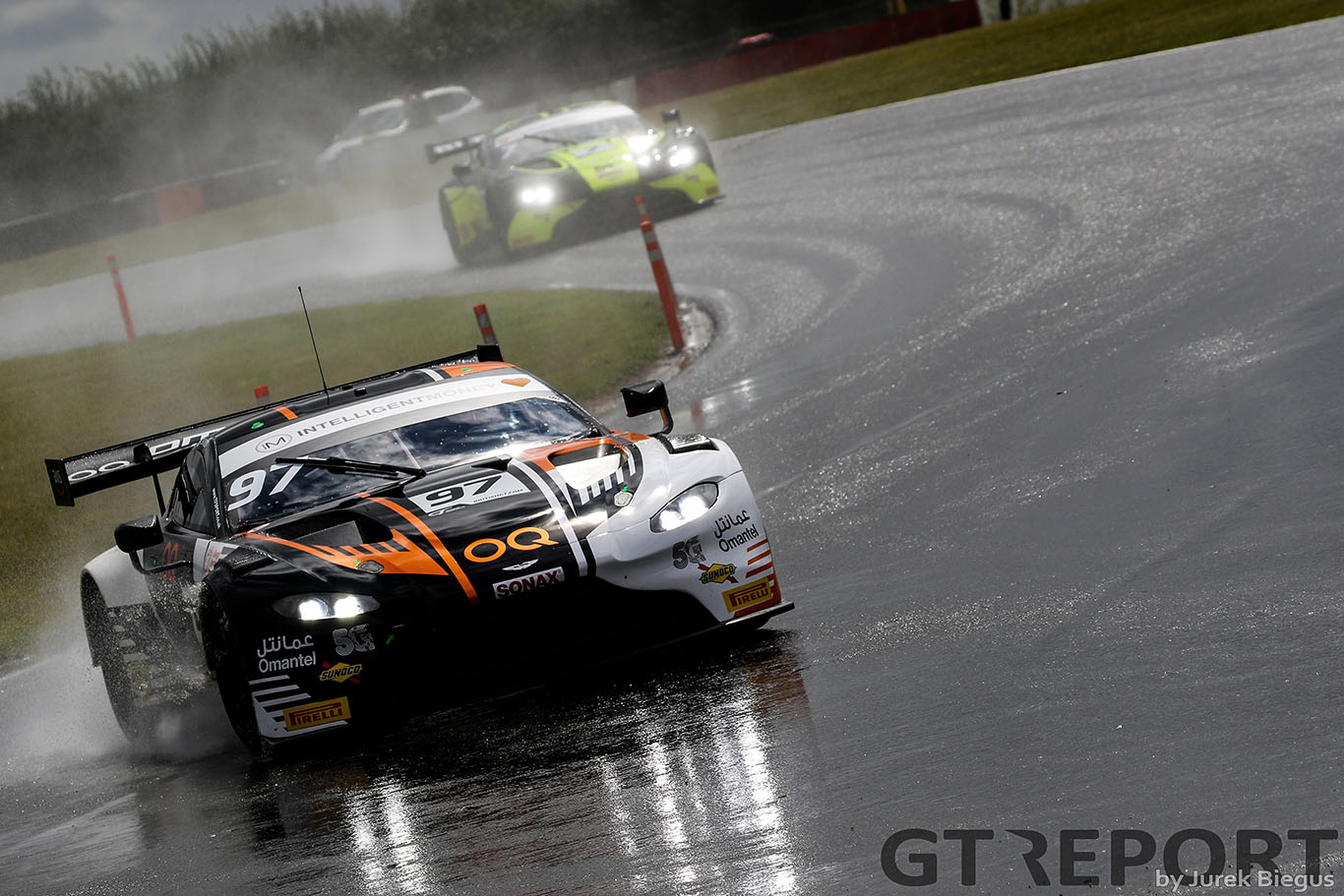 Oman Racing with TF Sport and Barwell Motorsport claimed the two Intelligent Money British GT Championship pole positions at Snetterton, with Dennis Lind taking pole for Barwell by just 0.004sec in one of the tightest sessions of the season.

In GT4, Alain Valente dominated the first qualifying session in the secondary class for Team Rocket RJN, as Charlie Robertson did likewise in his session to secure pole for Assetto Motorsport.

As always for weekends with two 60-minute races, the first session for both the GT3s and GT4s sets the grid for the first race, whilst Q2 for both classes sets the field for Race Two

Qualifying for Race One

Ahmad Al Harthy, in the Oman Racing Aston Martin Vantage GT3, was one of the early pacesetters around the Snetterton 300 circuit as he dropped to the low 1m50s with a cracking lap that put the rest of the field in his dust.

To rub salt in the wound, his next lap dropped the target even lower with a 1m49.237sec – the only driver to get into the 1m49s as he secured pole for the opening race of the weekend by a, frankly ridiculous, 0.841sec – a sign of just how quick Al Harthy is around the Norfolk circuit on his long-awaited return to British GT.

The battle to join him on the front-row proved to be more intense, with second place changing throughout the ten-minute session. 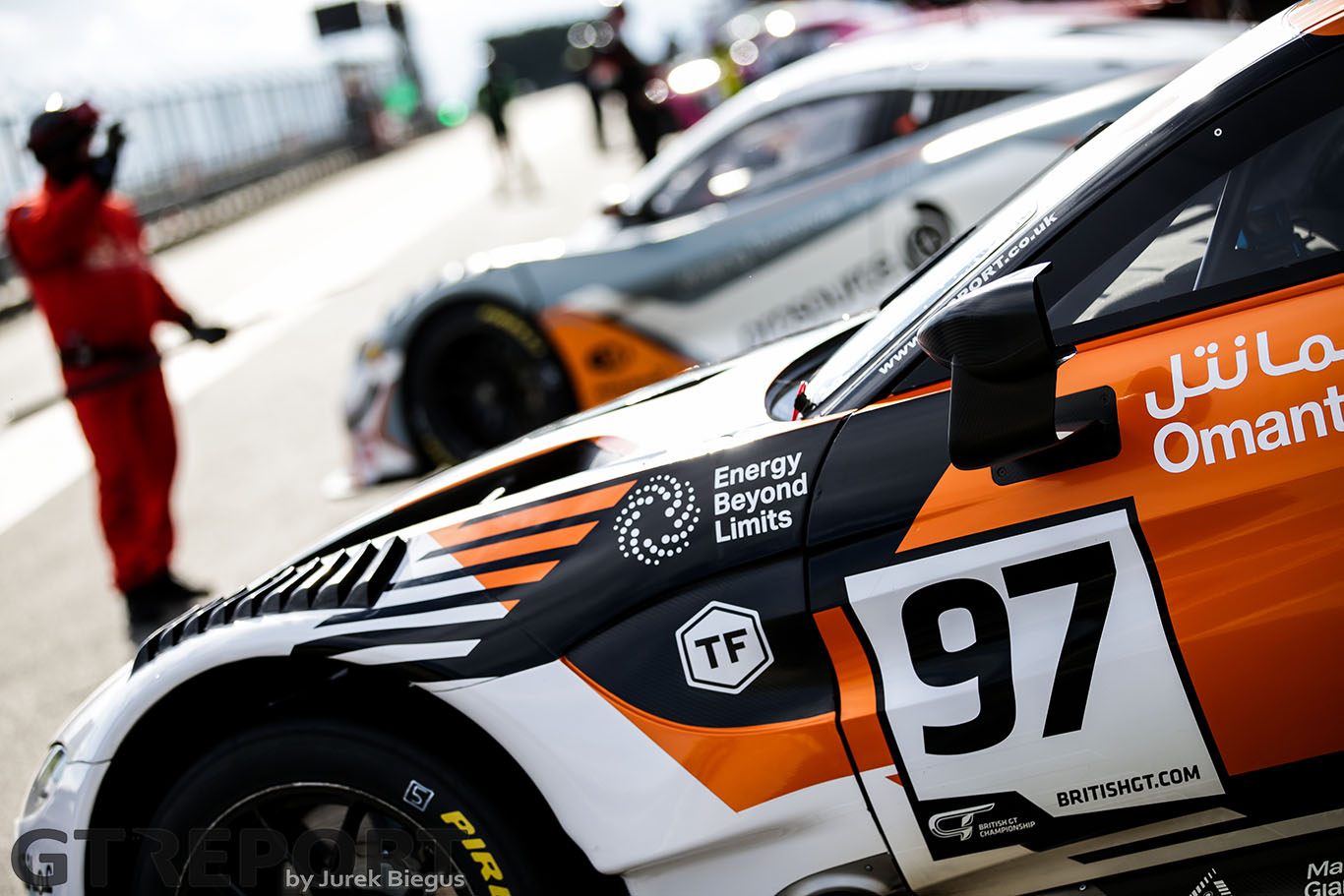 Ultimately, Kelvin Fletcher turned around relatively slow practice pace to absolute haul the Bentley Continental GT3 round the circuit to secure the outside of the front-row for Paddock Motorsport, a comfortable 0.331sec in the end over Morgan Tillbrook. The Enduro Motorsport driver improved on his very last lap of the session in the McLaren 720S GT3.

Fourth went to Adam Balon in the Barwell Motorsport Lamborghini, who managed to out-pace Michael Igoe by less than a tenth to stay on the second-row.

It was a case of what might have been for Andrew Howard. The Beechdeam AMR boss will line-up sixth for the opening contest, but had set a lap which could have put him in the top four mix before it was taken away for a track limits violation.

Leo Machitski took seventh in the second Barwell Huraćan, with Ian Loggie eighth – having had a lap deleted himself for track limits in the RAM Racing Mercedes.

Ninth was the Balfe Motorsport McLaren 720S of Stewart Proctor, while the two Porsche 911 GT3 Rs rounded out the session, with Nick Jones qualifying ahead of Shamus Jennings. 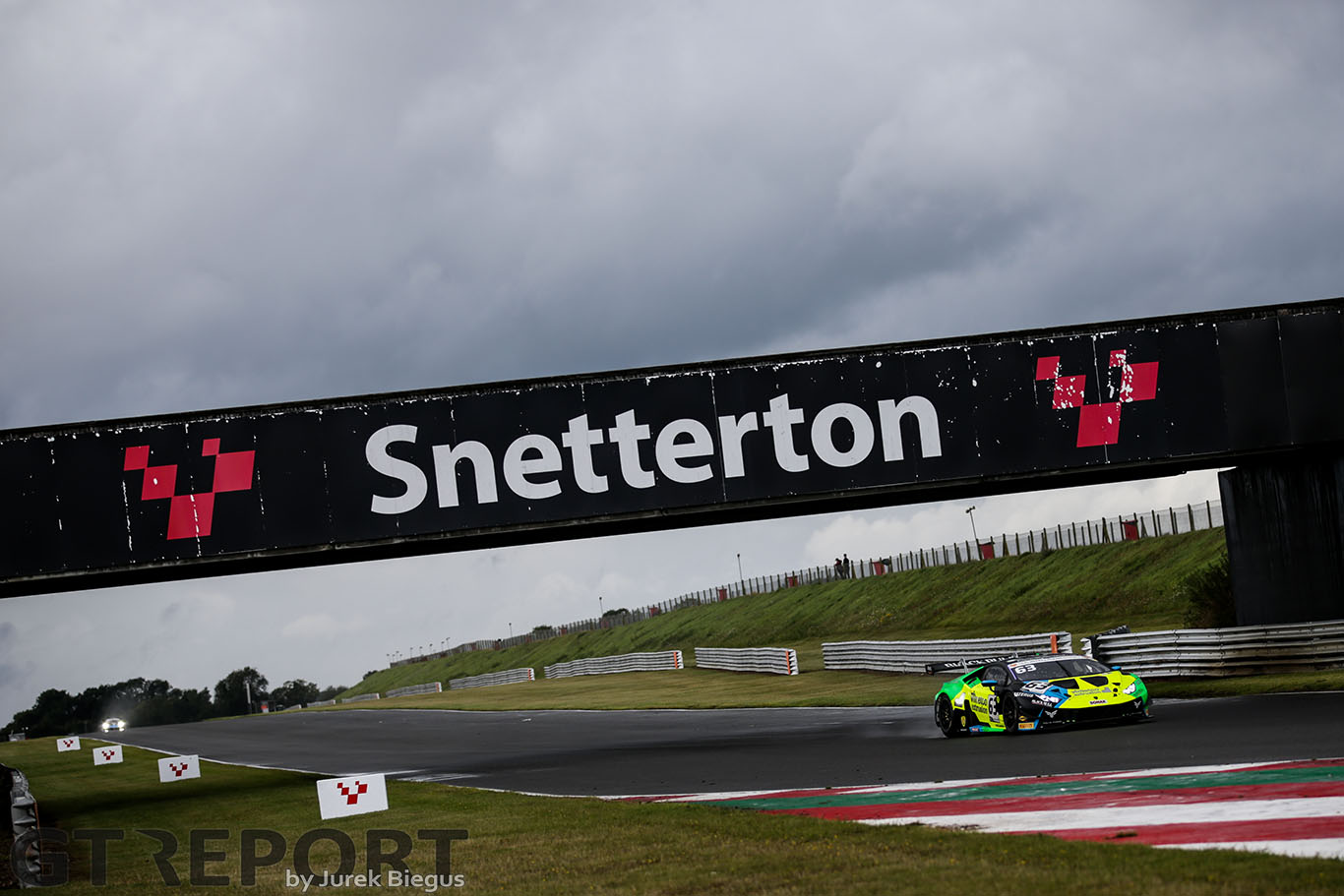 Alain Valente’s run to pole in GT4 played out pretty similar to Al Harthy’s GT3 triumph. The Team Rocket RJN driver was the fastest through the first set of flying laps for the 13-car field, and then took almost half-a-second off his first lap on his second tour of Snetterton to set a remarkable time of 1m57.504sec.

His rivals couldn’t even get remotely close to that, as Will Burns could only settle for second – 0.846sec behind in his Century Motorsport BMW M4 GT4.

You could say he was lucky to even be on the front-row as Will Moore utilised the grunt of the Academy Motorsport Ford Mustang to qualify third – only 0.128sec down on Burns and the last of the drivers within a second of Valente.

James Kell led a train of McLaren 570Ss as he took fourth in the second of the RJN entries, with Katie Milner in the final of the team’s efforts sixth. Jack Brown split the pair with fifth in his Balfe Motorsport entry.

Steller Motorsport finished eighth, Richard Williams losing an early lap thanks to track limits in the Audi. Ninth went to John Ferguson in the Supra, whilst Mark Sansom rounded out the top ten with the Assetto Ginetta G56. 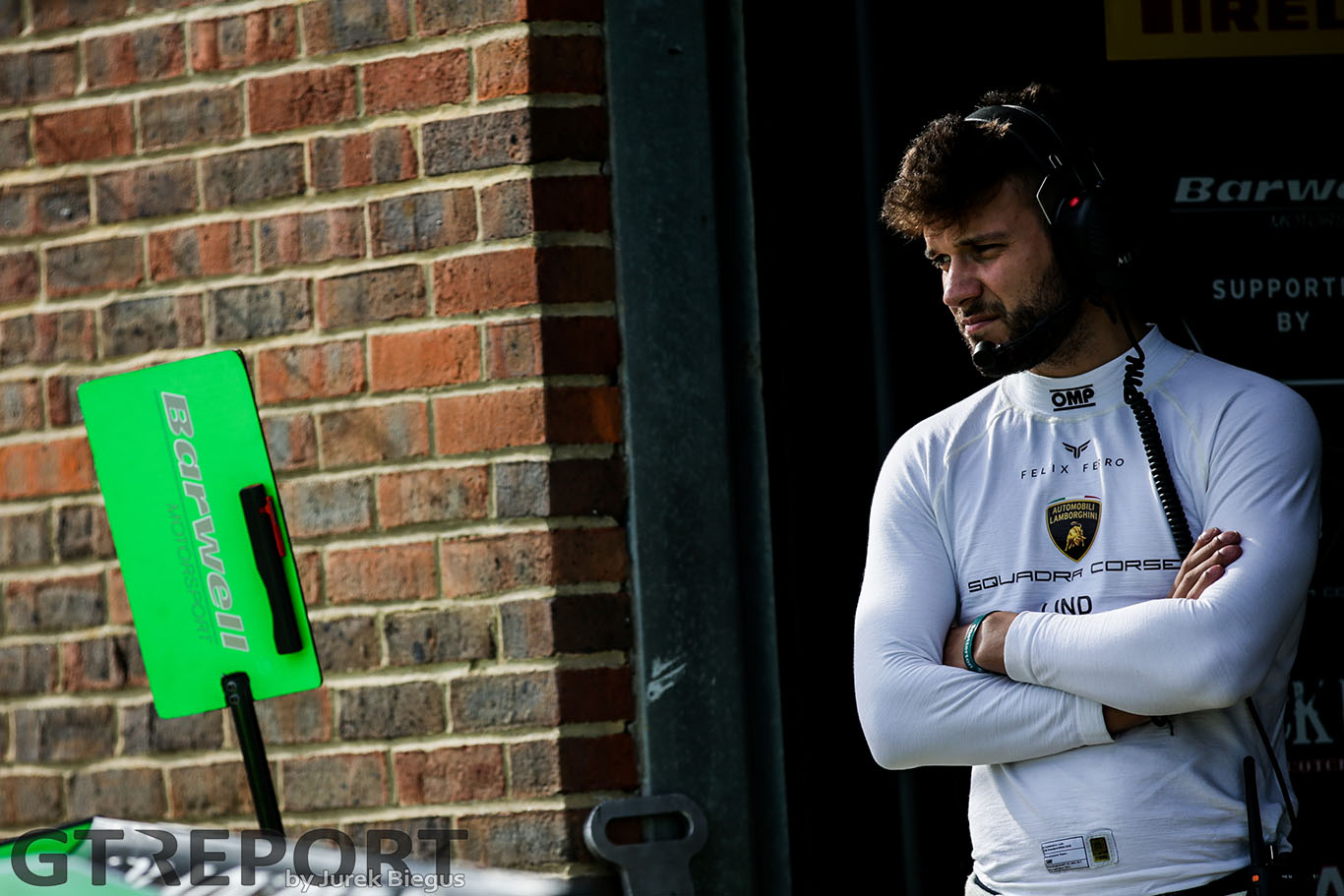 Compared to the session for the Ams, the second run for the Pros was a thrill-a-minute affair where pole was only really confirmed once all the cars had completed qualifying.

At the start, almost every car set the fastest time as the initial flying laps got logged on the timing screens, but with cars getting ever faster, it seemed unlikely anyone could go under Jonny Adam’s early benchmark of 1m47.808sec in the Beechdean AMR Aston.

That proved to be wrong, as Adam’s initial time was blitzed by two cars on the second flying lap. The first was the man pictured above, as Dennis Lind squeezed every single horsepower out of his Barwell Lamborghini to lower the benchmark to a brilliant 1m47.652sec.

It seemed as though he might be under threat at the very end as Yelmer Buurman equally pushed the accelerate pedal through the floor of the RAM Mercedes-AMG GT3 and was on course to seriously trouble the Dane’s top spot. He couldn’t quite snatch the top spot away though, falling short by just 0.004sec – much faster than even the blink of an eye. 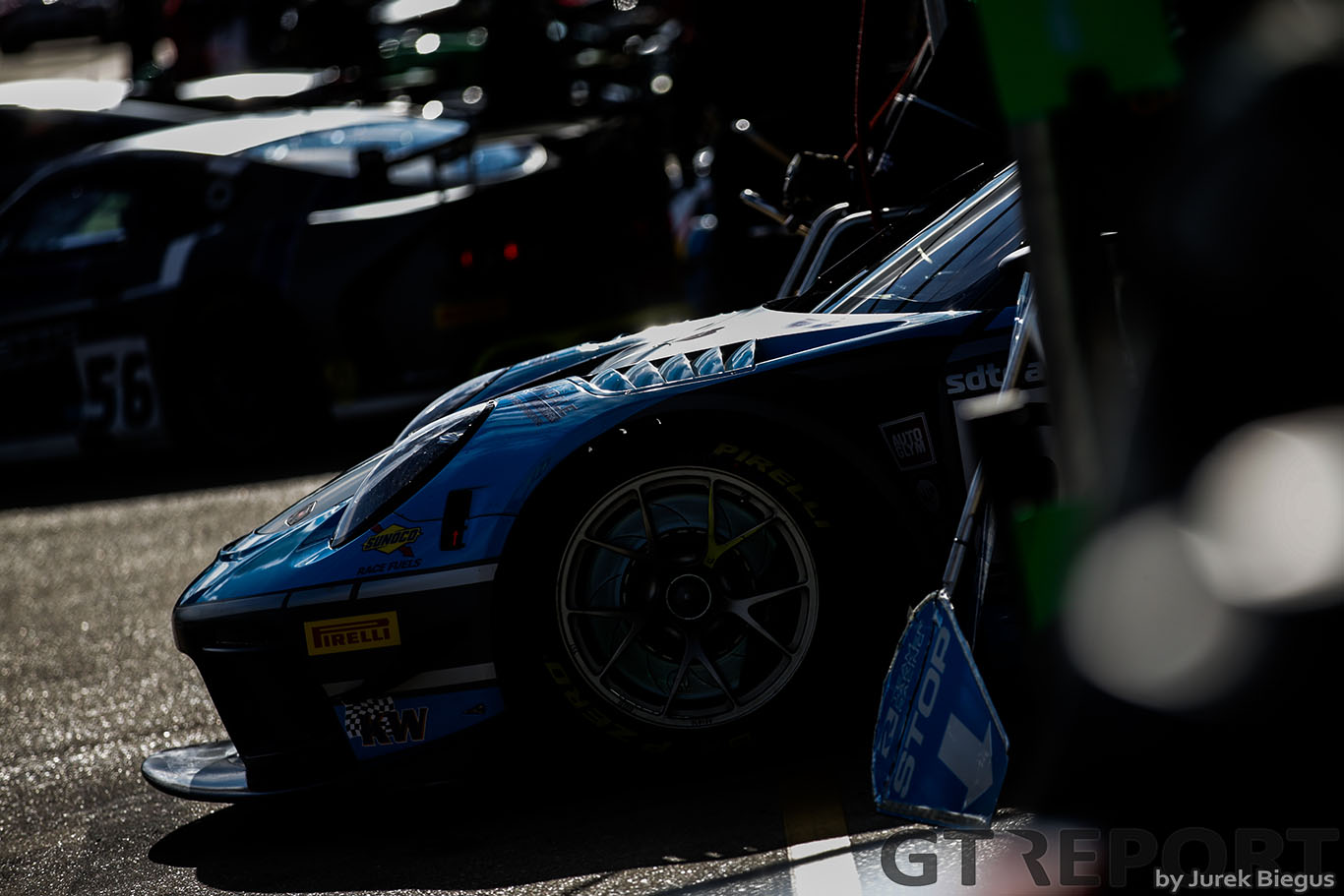 On an ordinary day, Adam’s deficit to Buurman in third would have been a tight gap, but compared to the difference for the top spot – his 0.152sec disadvantage is almost canyon-esque in comparison.

It was roughly the same margin by which Sandy Mitchell had to settle for fourth in the second Barwell Lamborghini – 0.113sec off the Vantage.

Marcus Clutton rounded out what the Enduro Motorsport team should consider a strong qualifying with fifth, a tenth ahead of Charlie Eastwood in the Oman Racing Aston.

WPI Motorsport’s Phil Keen could only take seventh, with their red and black Huraćan seemingly lacking that final bit of pace. He did, though, out-qualify Martin Plowman’s Bentley by 0.411sec.

Lewis Proctor didn’t set a time in the Balfe McLaren, with mechanical issues continuing to hamper that car after alternator problems in practice. 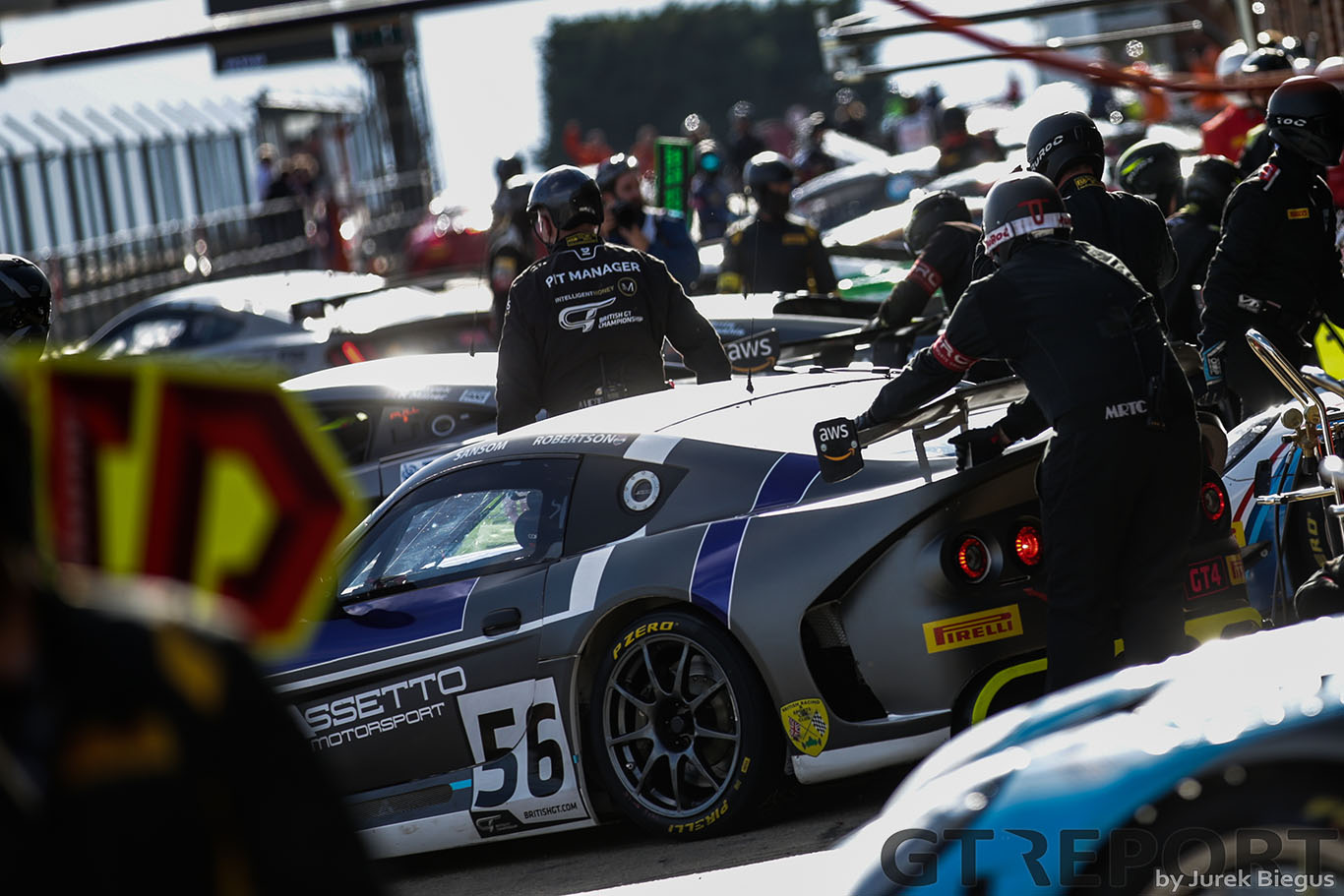 That competitive trend for the Pros didn’t quite translate over to the GT4 session, as Charlie Robertson demonstrated why he’s one of Ginetta’s go-to factory drivers by pulverising the field in the Assetto Motorsport Ginetta, where both his first and second laps would have been good enough for pole.

His ultimate fastest lap of 1m56.937sec was the only one beneath 1m57. Despite Darren Turner’s best efforts in the Newbridge Aston, he had to settle for a spot alongside Robertson on the front.

Despite deciding to do a spot of Rallycross at Hamilton on his opening lap, Jordan Collard recovered in fine style to put the #2 Team Rocket RJN McLaren third – only 0.003sec down on Turner’s best lap!

Gus Burton took fourth, 0.028sec ahead of Michael Benyahia’s McLaren that topped Q1, which was a quarter of a second clear of Scott McKenna in the Speedworks-run Toyota Gazoo Racing UK Supra.

Close behind was Matt Cowley in the Academy Mustang, while Jake Giddings was the first driver outside of Robertson’s pole time by more than a second in eighth. 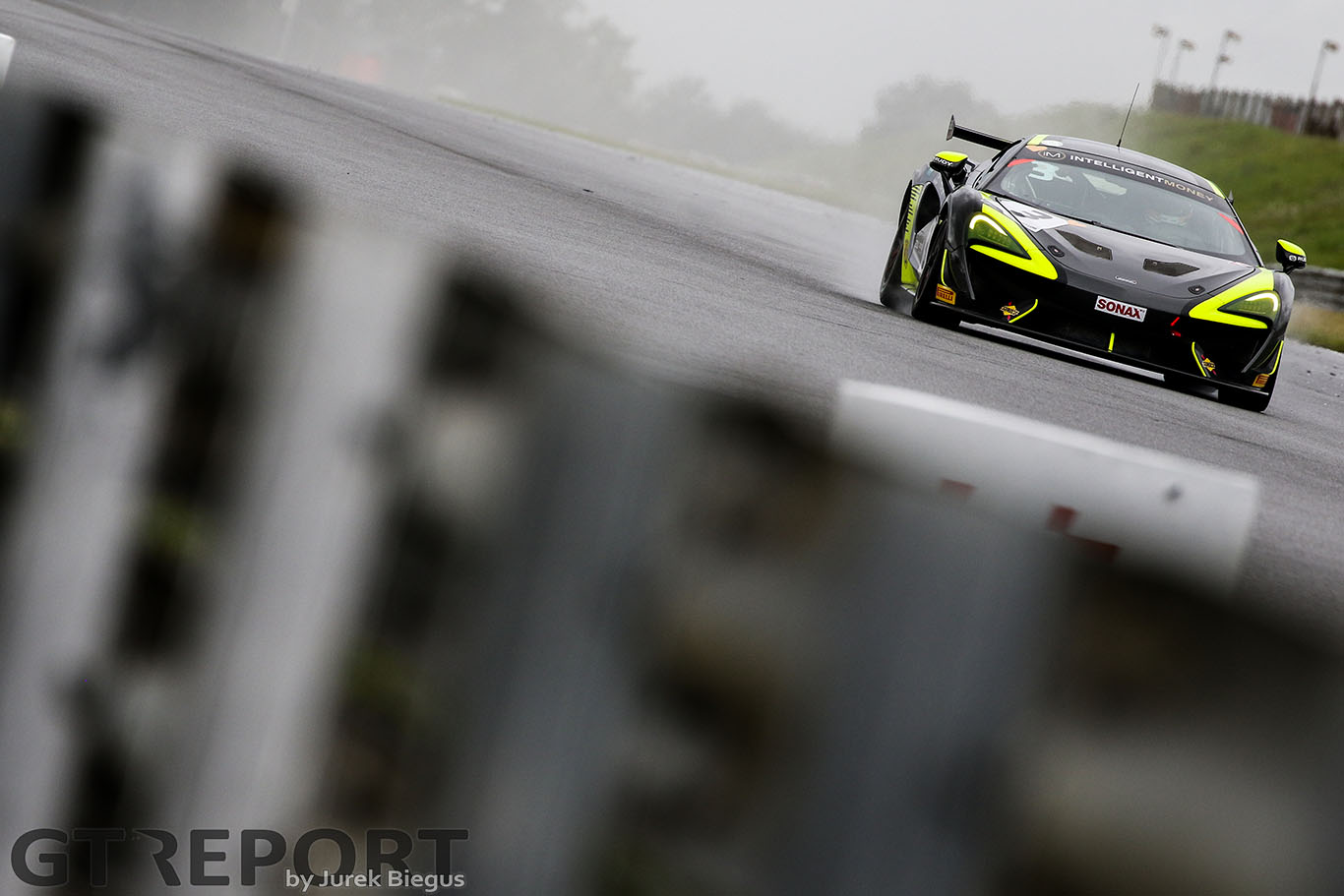 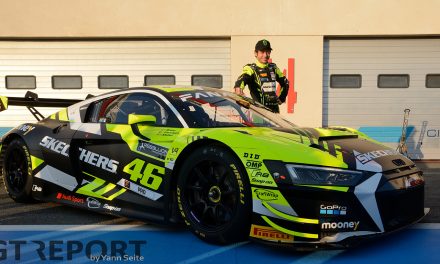