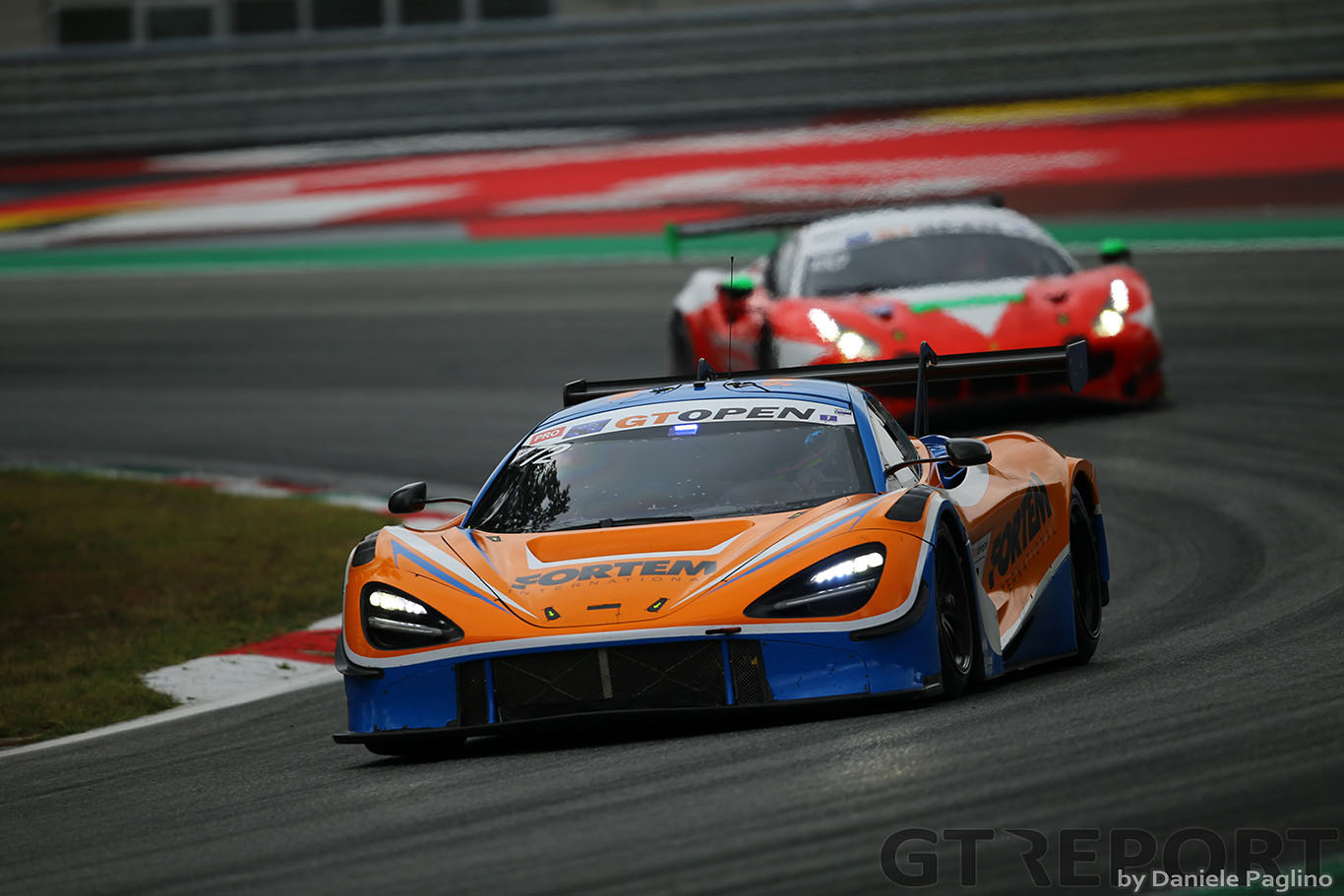 Joe Osborne and Nick Mason took victory in race two of the International GT Open at Monza closing the gap in the championship to just 4 points. The championship leaders, Kevin Gilardoni and Glen Van Berlo couldn’t have had a worse weekend and have dropped to P3 in the overall standings after failing to finish the race.

At the start Osborne driving the #72 Optimum Motorsport McLaren 720 S GT3 got away well from P2 on the grid and took the lead into the first chicane ahead of the pole sitting #133 Kessel Racing Ferrari 488 GT3 Evo of David Fumanelli. 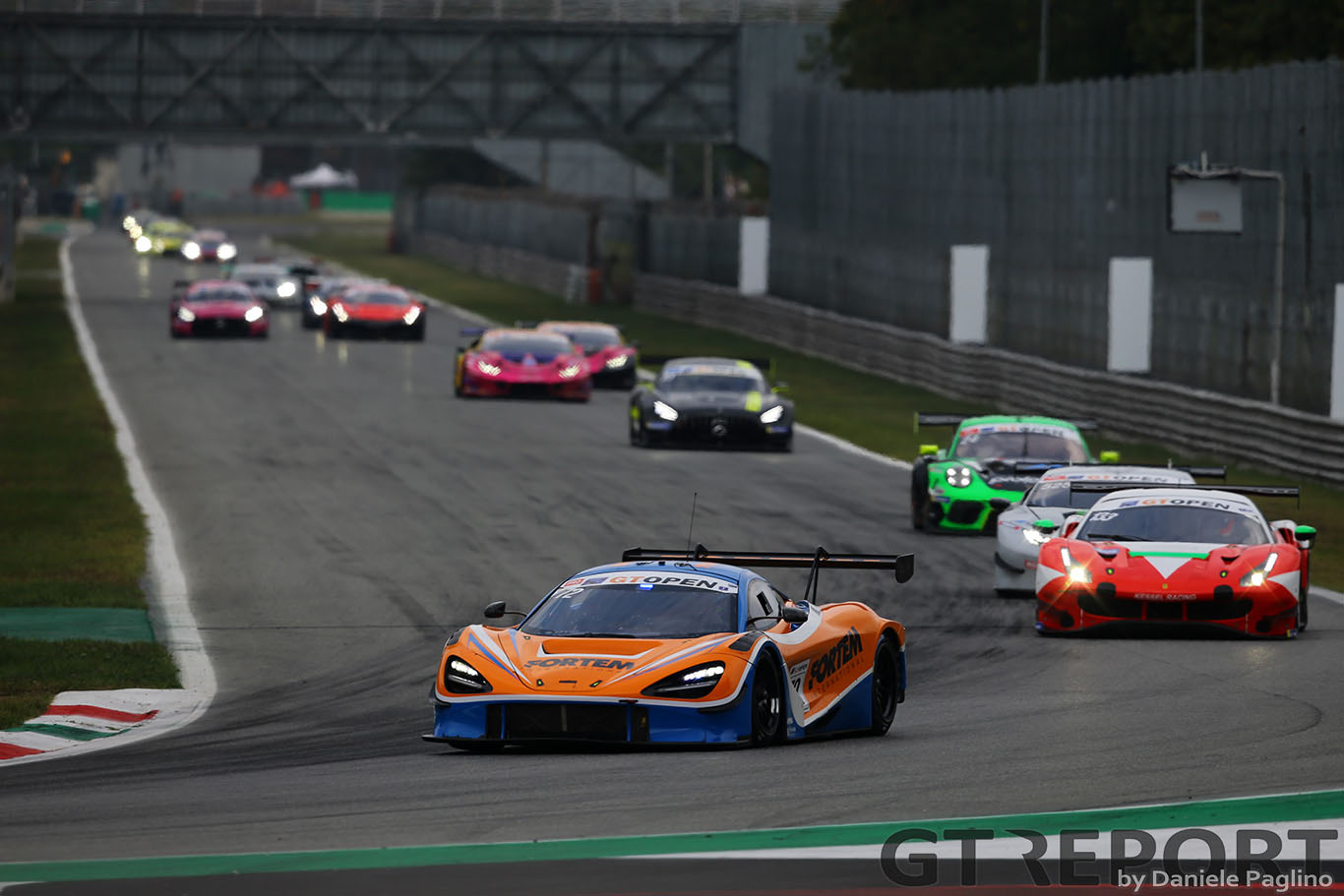 Fumanelli fought back and held the inside line into the corner which forced Osborne to cut the corner to avoid contact. Yesterday’s winner, Klaus Bachler driving the #24 Dinamic Motorsport Porsche 991 GT3 R took P3 ahead of Alberto Di Folco who, driving the #525 Imperiale Racing Lamborghini Huracan GT3, had the better run around Curva Grande and took P3 back into the second chicane.

Bachler stayed close to Di Folco in the following laps and it wasn’t long before he made contact with Di Folco on the entry into turn 1 turning the Lamborghini around and earning himself a 5 second penalty.

At the front and having built a lead of 1.4 seconds Osborne fell foul of the stewards who decided his opening lap cut of the chicane was unacceptable and he was ordered to give the place back. Osborne left it as late as possible to let through the Ferrari by which point Bachler was now also lurking close by ready to mug the McLaren of P2.

Osborne gave up the position around Curva Grande and was successful in fending off Bachler but the Porsche was never far away. Picking up at tow along the pit straight, Bachler was alongside Osborne into the first chicane. Osborne refused to yield and the pair ran side by side to the second chicane where Bachler, with the inside line and Osborne likely aware of the Germans looming penalty, took the position.

Bachler went on to take the lead on the following lap after Fumanelli was delayed by the #76 7TSIX McLaren 720 S GT3 of Leo Loucas on the exit of Ascari. Bachler was able to dive up the inside of Fumanelli into Parabolica with Osborne close behind demoting the Ferrari to third place. 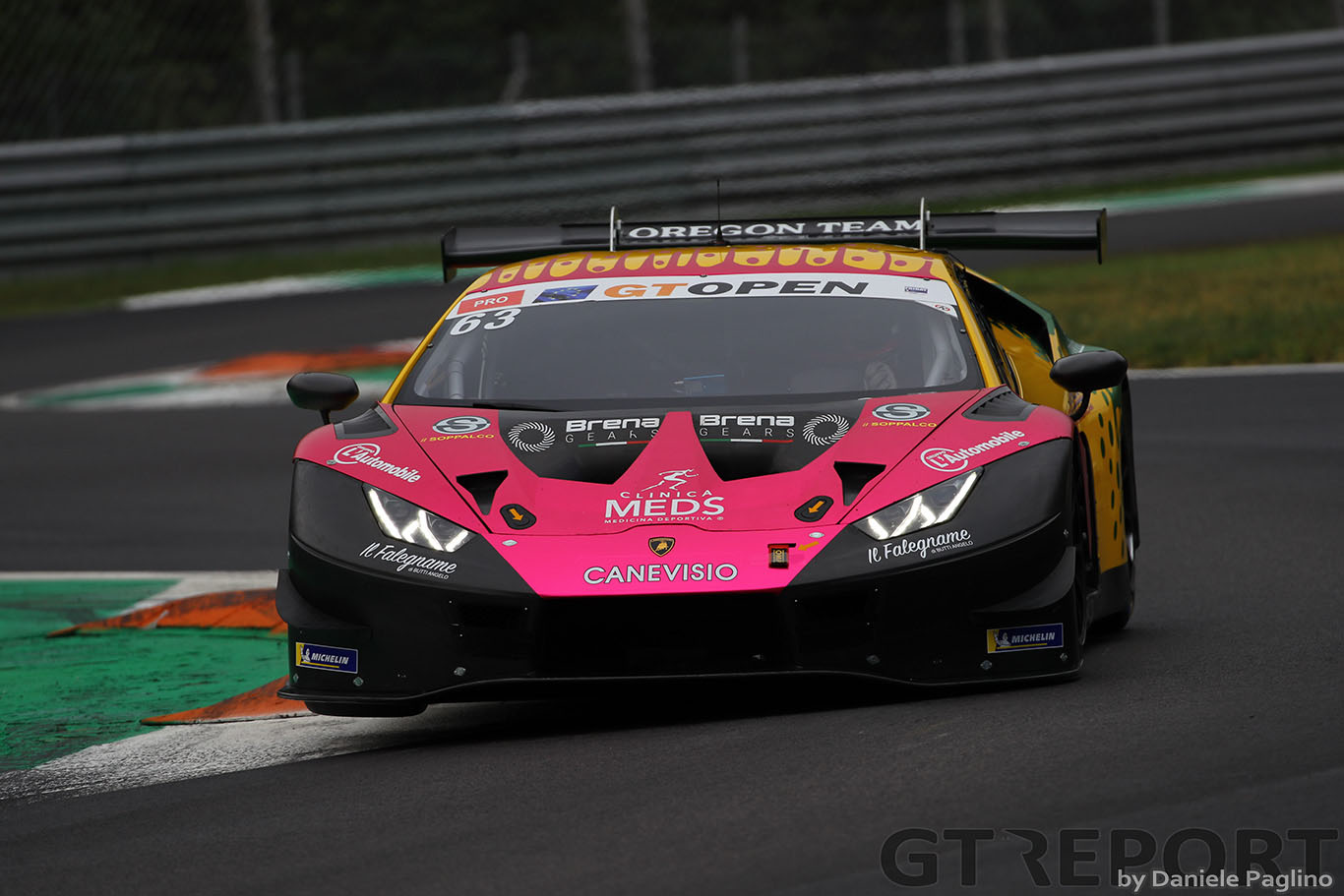 Behind the battle for the top 3 places were the two Lamborghinis of Team Oregon with the championship leading #19 of Kevin Gilardoni leading the #63 car of Benjamin Hites. With the team mates holding first and second in the championship and separated by just two points, there were clearly no team orders. With Alain Valente in the #33 Team GT Mercedes AMG GT3 EVO beginning to creep up behind the squabbling Ferraris, the issue would be resolved in the pit lane.

At the pit window a problem with the championship leading  #19 left them stranded in the pits which mostly summed up the luck the team had endured at Monza this weekend.

Out on track Joe Osborne stayed out as long as possible pitting with seconds to spare with Fumanelli stopping right behind him. With the stops completed Nick Moss held onto the lead in the Optimum Motorsport McLaren and the #133 Ferrari with Murat Ruhi Cuhadaroglu on board retained P2 however he found himself with the remaining Oregon Motorsport #63 Lamborghini of Leonardo Pulcini on his tail and was soon dropping down the order.

Moss was by now some 10 seconds up the road and Pulcini looked like he might start bringing down the gap having cleared Cuhadaroglu, but despite taking the occasional tenth out of the Englishman, Pulcini was unable to cut the gap to below 8.5 seconds. Cuhadaroglu fell further behind when James Roe took P3 through Ascari in the #525 Lamborghini.

At the front Moss continued to be equal to whatever Pulcini could do and held a consistant  8 second lead over the chasing Lamborghini but with 12 minutes remaining a safety car was called after the #777 Olimp Racing Audi R8 GT3 Evo of Karol Basz left the track at the first Lesmo.

With the field bunched up and Moss’s 8 second lead wiped out the safety car pitted with barely 3  minutes remaining. Moss was away quickly and was already 1.4 seconds ahead of Pulcini by the second chicane as the Italian was slow away at the restart and also had to contend with a back marker sitting between the leading pair. 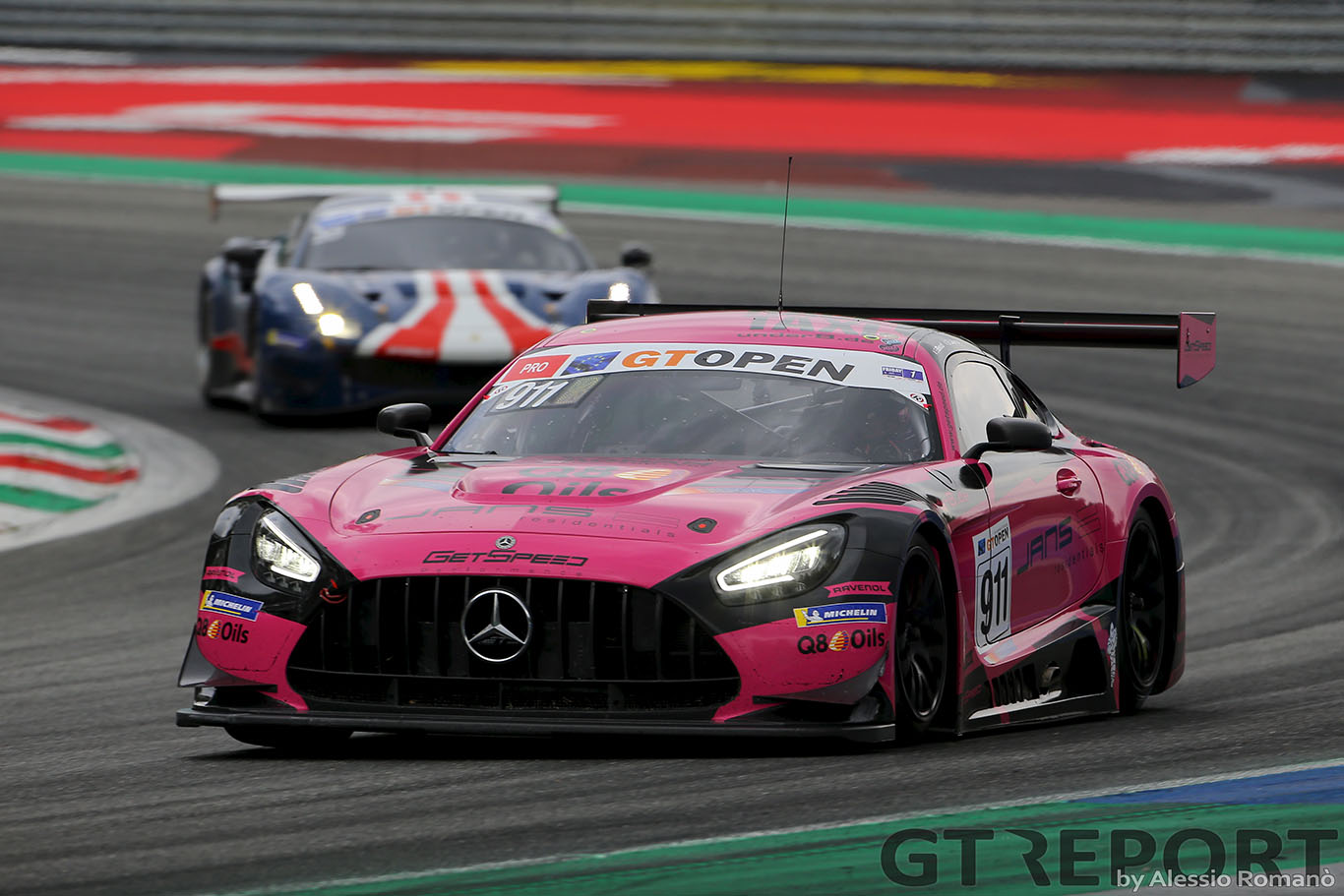 Moss held comfortably on to the lead and took the flag ahead of Pulcini and the #911 GetSpeed Performance Mercedes AMG GT3 of Steve Jans which benefitted from an optimistic move from Riccardo Cazzaniga in the #24 Porsche. Having recovered through the field following Bachler’s penalty, the Italian attempted one last attack on the #525 Lamborghini of James Roe which was already facing an 8 second post race penalty. The move at Parabolica saw the two nearly end up in the gravel and left the door wide open for a grateful Jans to take the final podium place.

The 2022 International GT Open championship will conclude at the Circuit de Catalunya in Barcelona  on the weekend of 15/16 October with the championship wide open. 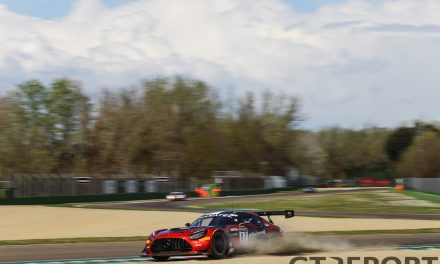 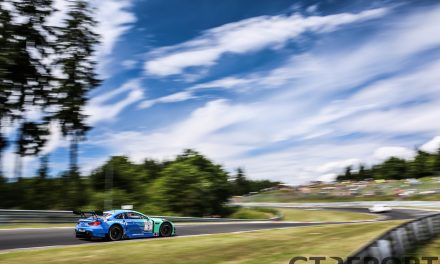