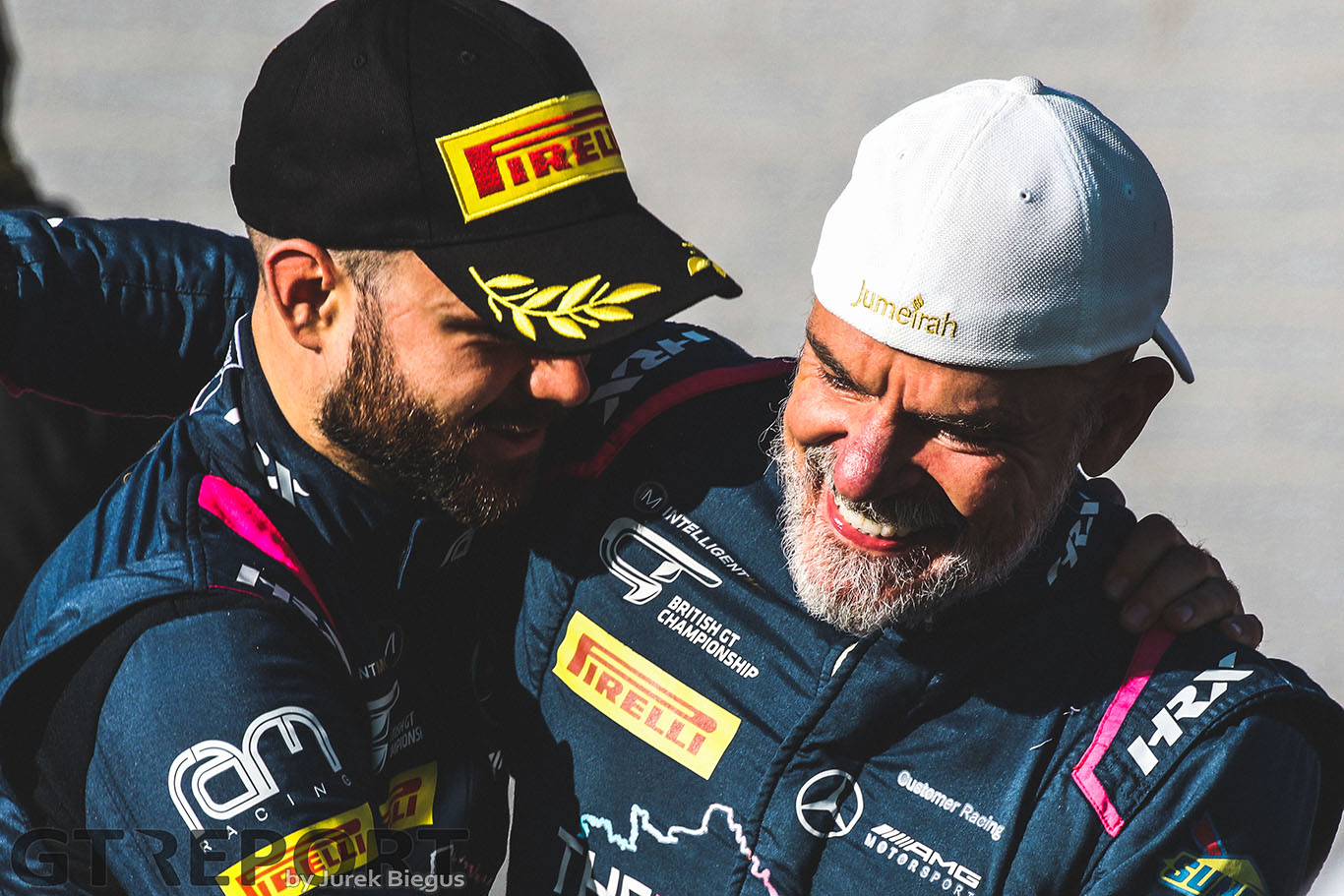 Ian Loggie thought he had ‘sold his championship’ after two early incidents put him to the back of the field, but an inspired fight back and a remarkable final stint from Jules Gounon secured the Scot his first Intelligent Money British GT Championship crown in style.

In GT4, an inspired drive from Steller Motorsport secured the title for Sennan Fielding and Richard Williams despite the pair being far from favourites, assisted by a somewhat indifferent race for leaders going into the race – Newbridge Motorsport.

The race itself was a masterclass from Alex Sims and Darren Leung – the latter winning GT3 on his debut, whilst the Speedworks Supra converted pole to victory after a brute of a display from Tom Edgar and Jordan Collard.

#DoningtonDeciders always tend to spark chaos, and the 2022 edition was no different.

Indeed, it appeared as though Loggie was going to miss out on a title on the very first lap as he made the choice to go round the outside line at Redgate but found his path blocked by a melee ahead. Taking his RAM Racing Mercedes-AMG GT3 to the gravel, he recovered well but dropped to the back of the field. 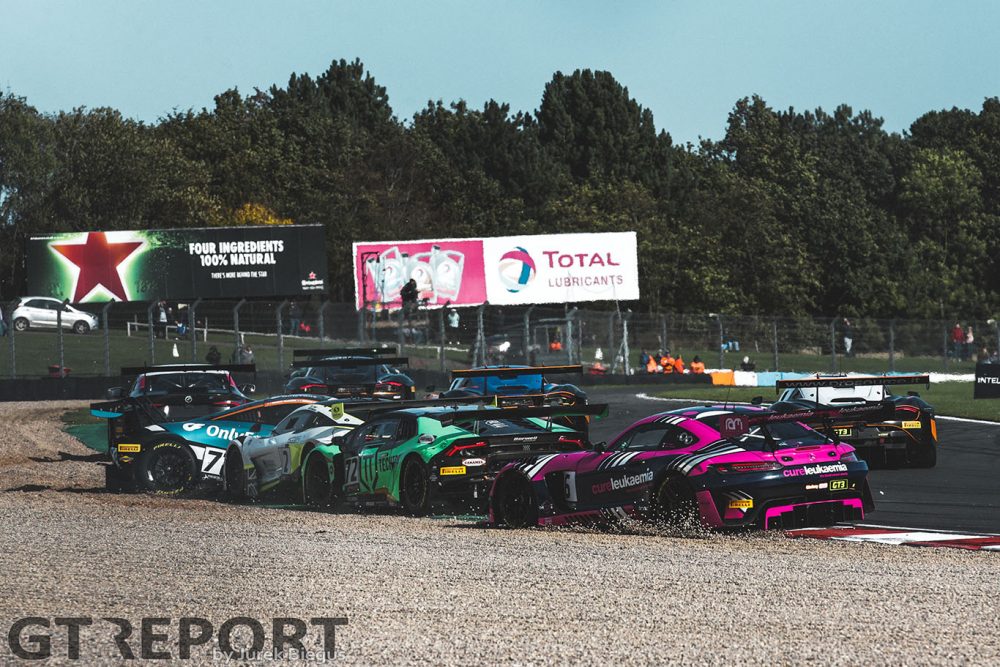 Five minutes later and his challenge was made even tougher as he had a lurid spin coming out of Goddards and dropped him to the back of the pack once again.

From there, he got his head down and pushed. Picking up positions on a regular basis, he was aided too by his title rivals struck down by the sort of bad luck that only seems to raise its head at season finales.

Morgan Tillbrook had a spin on the first lap, avoiding a hard-braking Leung which instigated the road block which sent Loggie to the gravel, and was then slapped with a drive-through for clipping Leung as he tried to emergency brake.

James Cottingham too had problems. After a solid start and a spell in fifth overall, coming out of the Old Hairpin, he seemed to almost get sucked onto the grass beyond the kerb. Bouncing across the run-off he demolished a polystyrene advertisement board which had to get scooped out of the 2 Seas Mercedes’ grill at an unscheduled pitstop.

With his rivals pegged back, Loggie was inspired. A clean stop from the RAM crew allowed Jules Gounon to take over the pink machine side-by-side with Sandy Mitchell’s Barwell Motorsport Lamborghini Huracán GT3 Evo. Overcoming the Scot rather easily, he set about trying to reel in Sims, but the Century BMW driver was on fine form and couldn’t be dispossessed of his hard-earned lead, having benefited from slick work in the pits. 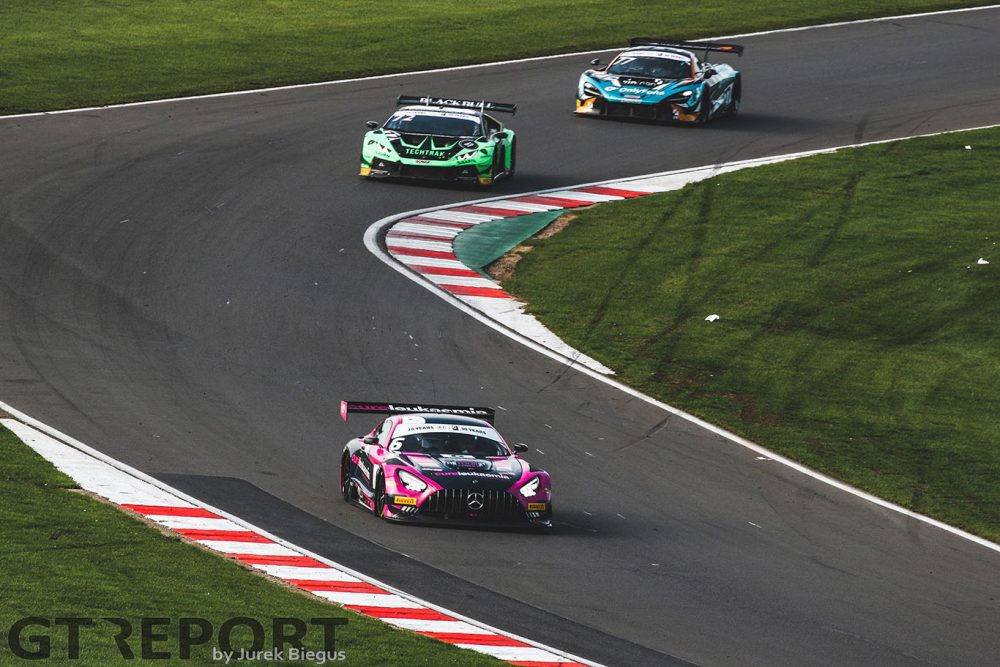 Gounon too had to be cautious of Marcus Clutton. The latter took over from Tillbrook in a decent position and benefitted from a second-hour safety car – ironically to clean up debris which partly came from the Enduro Motorsport McLaren.

Dispatching Mitchell, helped by the Lamborghini having a little bit of bodywork rub which slowed him for a lap, Clutton closed in quickly on Gounon’s rear to the extent that the top three were covered by less than a second for most of the final 20 minutes.

No moves could be done, though, and second for Loggie and Gounon was enough for Loggie to take the title solo because of Gounon and Callum Macleod splitting co-driver duties for the season.

After the race, the Scot told GT REPORT: “Eventually we got it done! It was a tough old start, and then being at the back of the field chasing the GT4s meant lots of pick-up off-line and then I had that crazy spin and I thought ‘I’ve just sold my championship here, I’m going to be a bridesmaid again’.

“I just kept pushing, kept overtaking, we got a safety car and kept pushing. Couple of other cars went off, we make up [positions], have an amazing pitstop and we get ahead of the Barwell – just. Jules did a great job there. Then it was just a case of finishing in second and bringing it home. 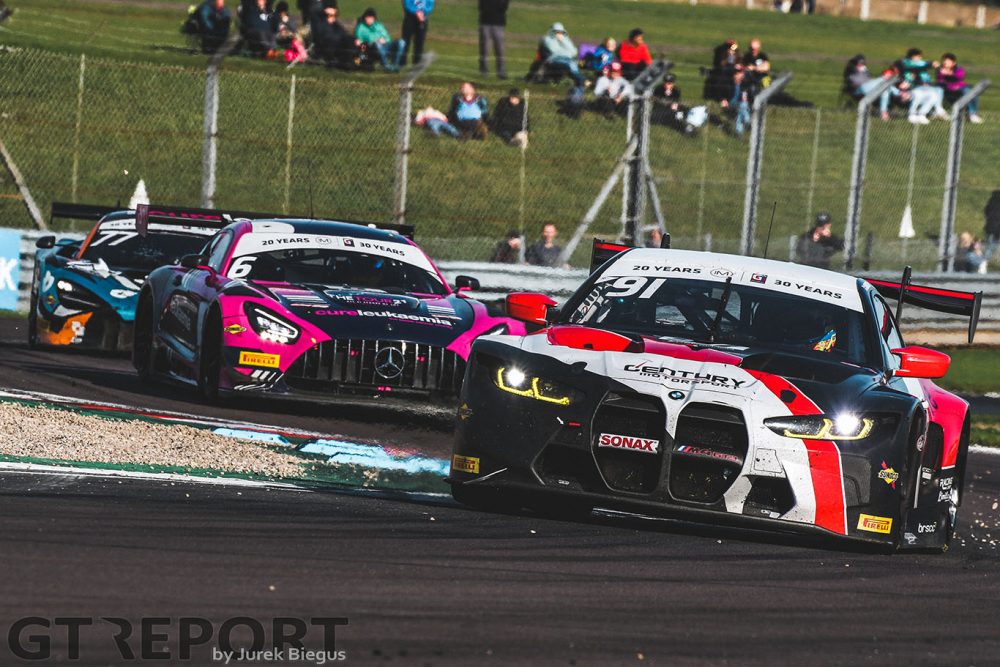 “It’s an amazing feeling, it’s not sunk in yet really if I’m honest. I’ve wanted to win it for so long I can hardly believe it’s done now. Next week we’ll have moved on to something else! Next week is a Radical Cup start so we’ll get stuck into that and see how we go. Then we’ve got the FIA Motorsport Games in France in two weeks, so it’ll be nice if we can get a result there for the UK.”

Behind the top three, which was Sims/Leung, Loggie/Gounon and Tillbrook/Clutton, fourth went the way of Orange Racing’s Michael O’Brien and Simon Orange.

The pair had a small stroke of fortune, certainly in the first hour. Richard Neary had made a great start from pole in the Team Abba Racing Mercedes-AMG GT3, and mastered an early safety car restart to have a comfortable gap to Orange.

However, with 70 minutes of the race to go, he slowed going down the Craner Curves with what the team suspected was a broken driveshaft,  to cap off what had been a crushingly unlucky season for Neary and son Sam, having lost a win at Brands Hatch with a fuel pump failure on the penultimate lap. 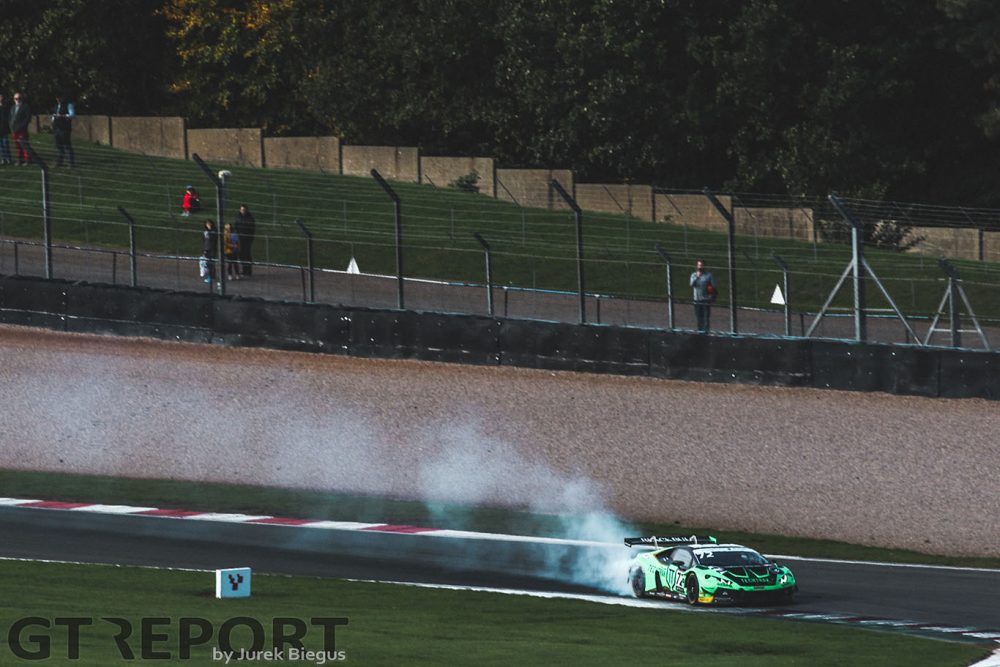 That handed Orange a lead he held pretty comfortably from Leung, but a slower pitstop – because of slower refuelling and wheel gun issues – meant he handed over to O’Brien slightly further down the order before the GT Cup champions recovered to fourth.

Mitchell and Adam Balon took fifth, having had a pretty solid race but never finding themselves in a position to try and capitalise on Loggie’s misfortune and nab the title.

Their fellow title rivals, Cottingham and Lewis Williamson, finished ninth ultimately – having been handed a drive-through for a safety car restart infringement to really compound the misery for the Mercedes-AMG GT3 pair.

Elsewhere, Andrew Howard secured silverware on his much-anticipated return to British GT as he took the Silver-Am class victory in the Beechdean AMR Aston Martin he shared with Lewis Proctor.

If GT3’s title battle was full of twists and turns, the battle for the crown in the secondary class was more of a nervous thriller with frantic maths needed to determine the direction of the title. 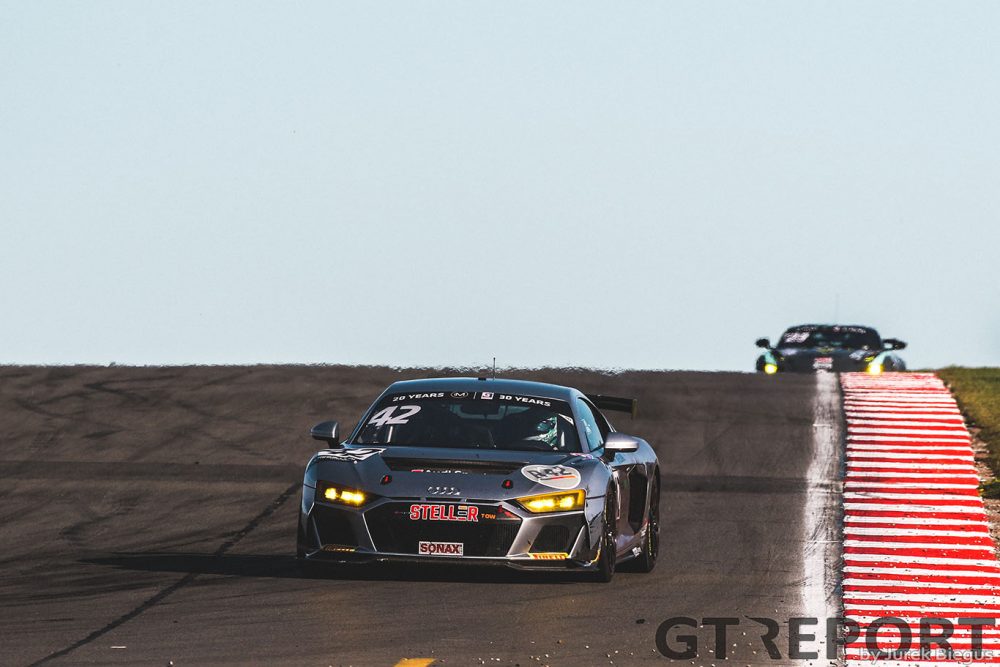 Heading into the weekend, it was the Newbridge Motorsport Aston Martin Vantage GT4 of Matt Topham and Darren Turner who held the advantage in the standings and with less time in the pits than their rivals – because of the Silver Cup penalty – it appeared as though they’d be the ones to do it.

That’s not how it played out. Starting lower down the order because of the conditions in yesterday’s qualifying, Topham struggled to make an impact in his stint – not helped by being slapped with a drive-through for a safety car restart infringement too.

Handing over to Turner, the Aston Martin factory driver had the pace to pick off a few places but found himself stuck behind Jack Brown’s Century Motorsport BMW M4 GT4. He was faster through the corners, but the BMW had the grunt to pull clear on the straights.

Needing fifth to guarantee the title, Turner could only finish seventh as the Vantage struggled against the competition.

That opened the door to Richard Williams and Sennan Fielding. the pair were absolutely on fire in their Audi R8 LMS, and were fighting to take advantage of the situation for their own ends after years of falling short. 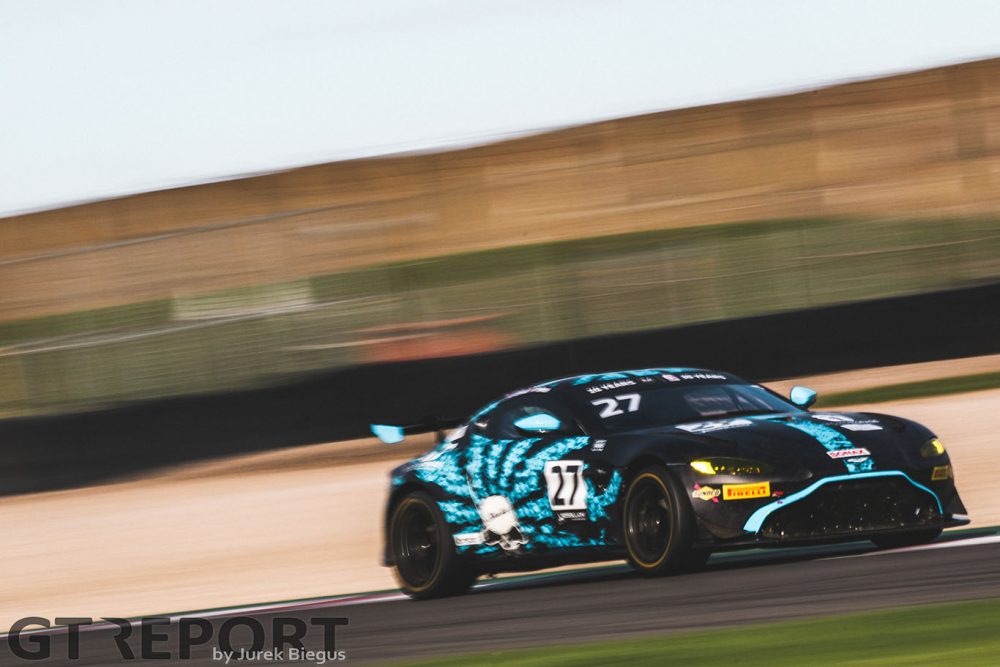 Williams put in a faultless opening stint, and Fielding went full-attack – as he told GT REPORT after the race – to gain the points he needed.

At one point, it looked as though they would fall short by one point to the pairing of Josh Miller and Jamie Day in the R Racing Aston Martin, but superb overtakes on Day and Moh Ritson – in the Pro-Am race winning Paddock McLaren 570S GT4 – gave them the points needed to walk away with the crown.

For Williams, the relief to walk away with the GT4 honours was palpable. Speaking to GT REPORT after being confirmed as provisional champions, he said: “I can’t put it into words at the moment. If I’m honest, coming into the weekend I felt confident that we were going to get this done so it doesn’t feel like a particularly… I’m joking! 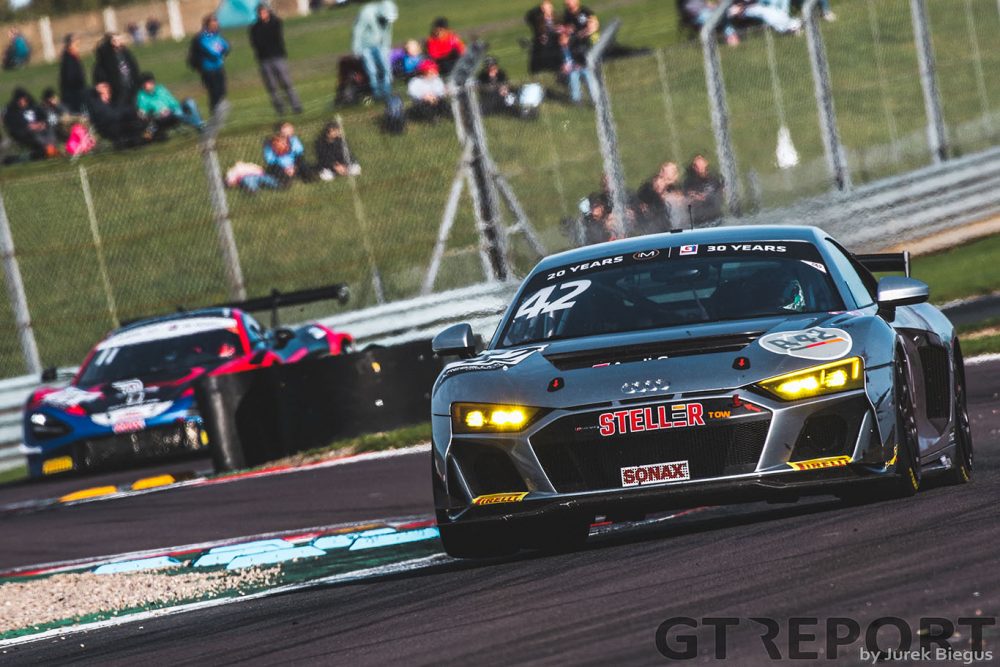 “It was a very stressful race for everybody really because we didn’t know what the #27 was going to be doing, or the pace they had. Credit to everybody involved in the whole programme, this has been a long-time coming and there’s been a lot of sacrifice on all sides.

“Massive hats off to Sennan, he deserves all the acolades he’s going to get for this which is quite a lot – and he deserves it too. We’re going to see what the winter brings for both of us and see what’s what going forward. Certainly going to enjoy the moment and make the most of it and see what 2023 brings!”

The race itself was a case of what might have been this season for Speedworks Motorsport. For the first time in a while, the team’s Toyota Supra GT4 was untouchable all weekend and was actually converted in the race as first Tom Edgar and then Jordan Collard disappeared into the distance – eventually taking victory by more than 16 seconds.

Second was Williams and Fielding, with third a decent scrap which went the way of Miller and Day having got the best of Moh Ritson and a debuting Kavi Jundu – the pair did take the Pro-Am honours to cap off what was a good display for the Paddock pair. 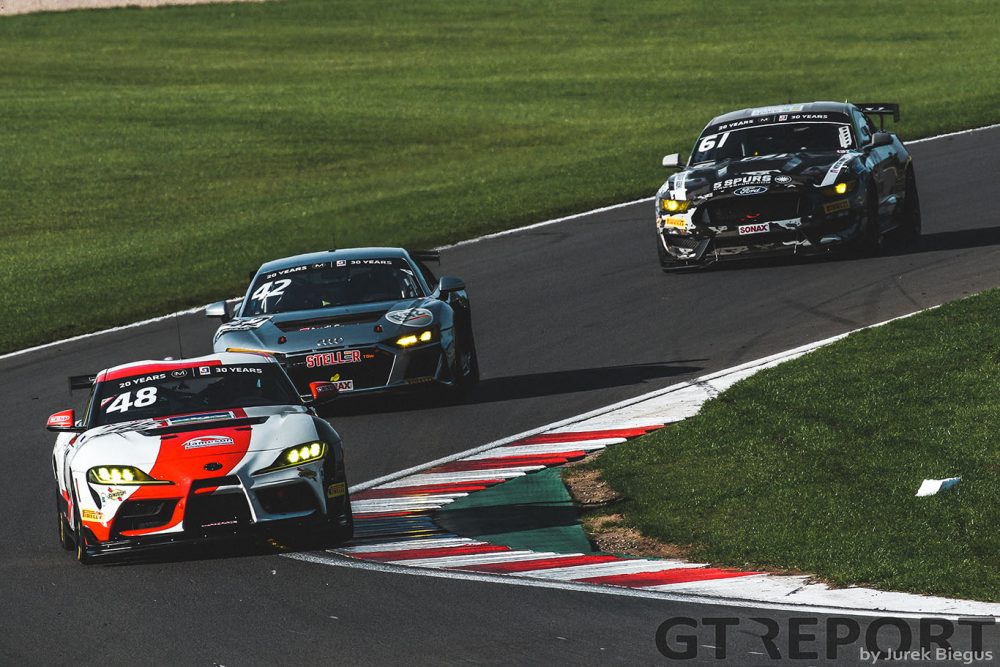 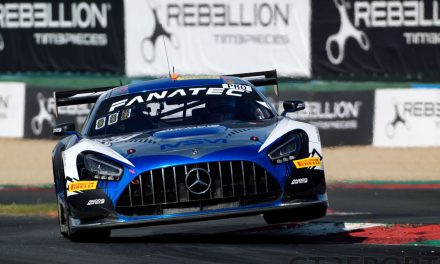 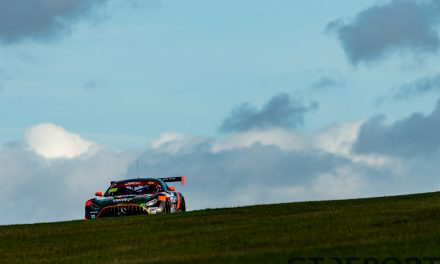 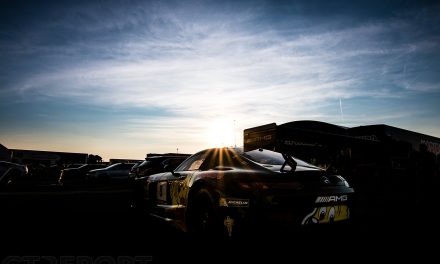