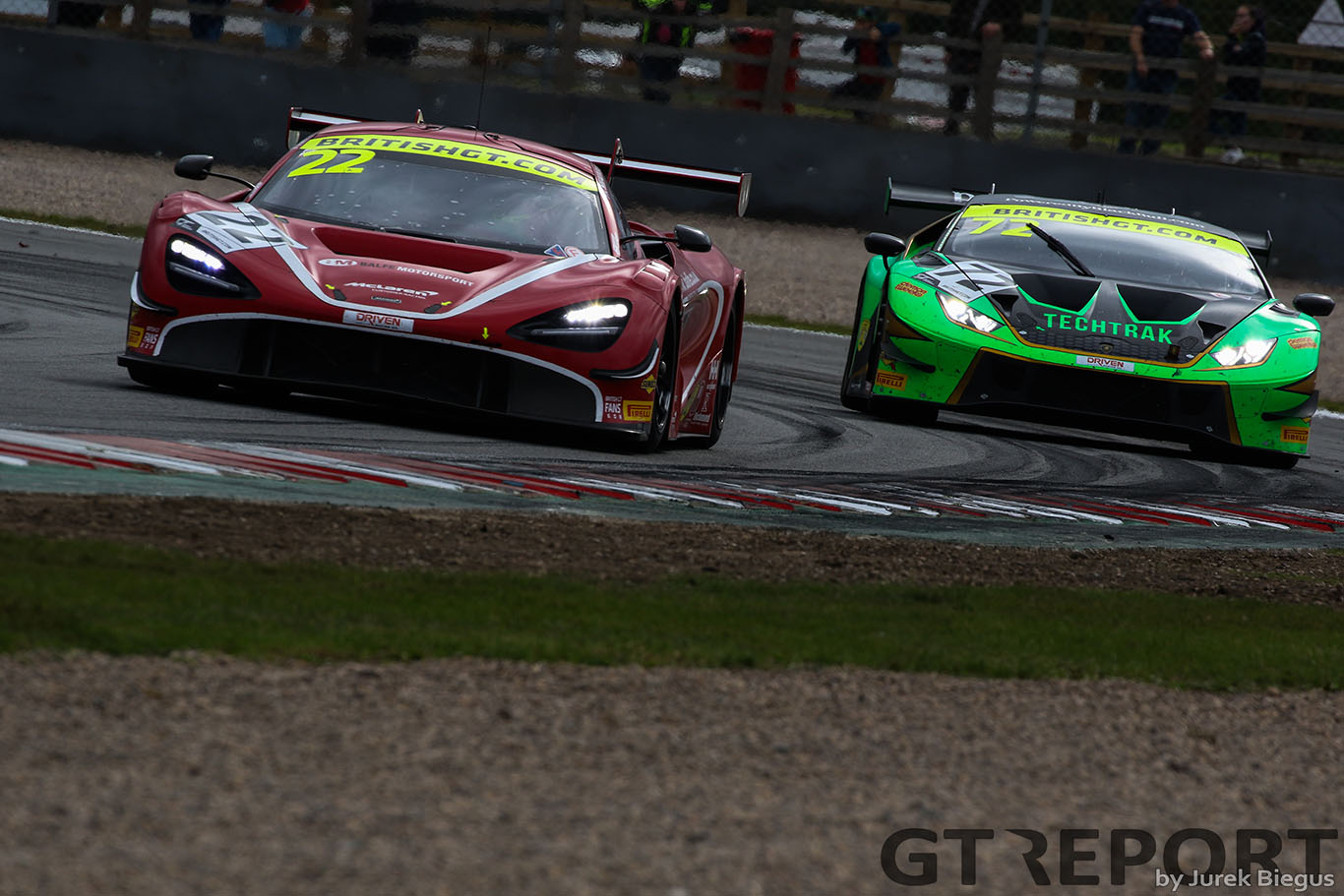 Balfe Motorsport claimed its first British GT Championship win in the Donington Decider but it wasn’t enough to deny TF Sport’s Jonny Adam and Graham Davidson the GT3 title – but it wasn’t quite as simple as it seems with mechanical dramas, late contact, and even later penalties causing an action-packed showdown.

What was more clear cut though, was TF Sport also claiming the GT4 title as Ash Hand and Tom Canning fought off pressure from the mammoth field to secure their first titles in the championship after a race-long battle with their rivals, the Multimatic Ford Mustang of Seb Priaulx and Scott Maxwell.

UPDATE: SRO has confirmed that WPI’s appeal against Dennis Lind’s five-second penalty has been dismissed so Adam and Davidson have officially been confirmed as 2019 British GT Champions.

In GT3, the race win was clearly Balfe’s from the very first lap of the race. After a collision between the #19 Ford Mustang and the #66 Team Parker Racing Mercedes-AMG GT4 on the formation lap which forced the safety car to stay out for the first 10 minutes, Shaun Balfe checked out at the front of the field and quickly pulled out enough of a lead to negate his 15-second success penalty after the team’s podium at Brands Hatch.

He was helped by squabbles breaking out immediately behind him. Adam Balon was the first man to lose a position as Ian Loggie squeezed his RAM Racing Mercedes-AMG GT3 up the inside of the Barwell Motorsport Lamborghini Huracán GT3 Evo at the Melbourne Hairpin. 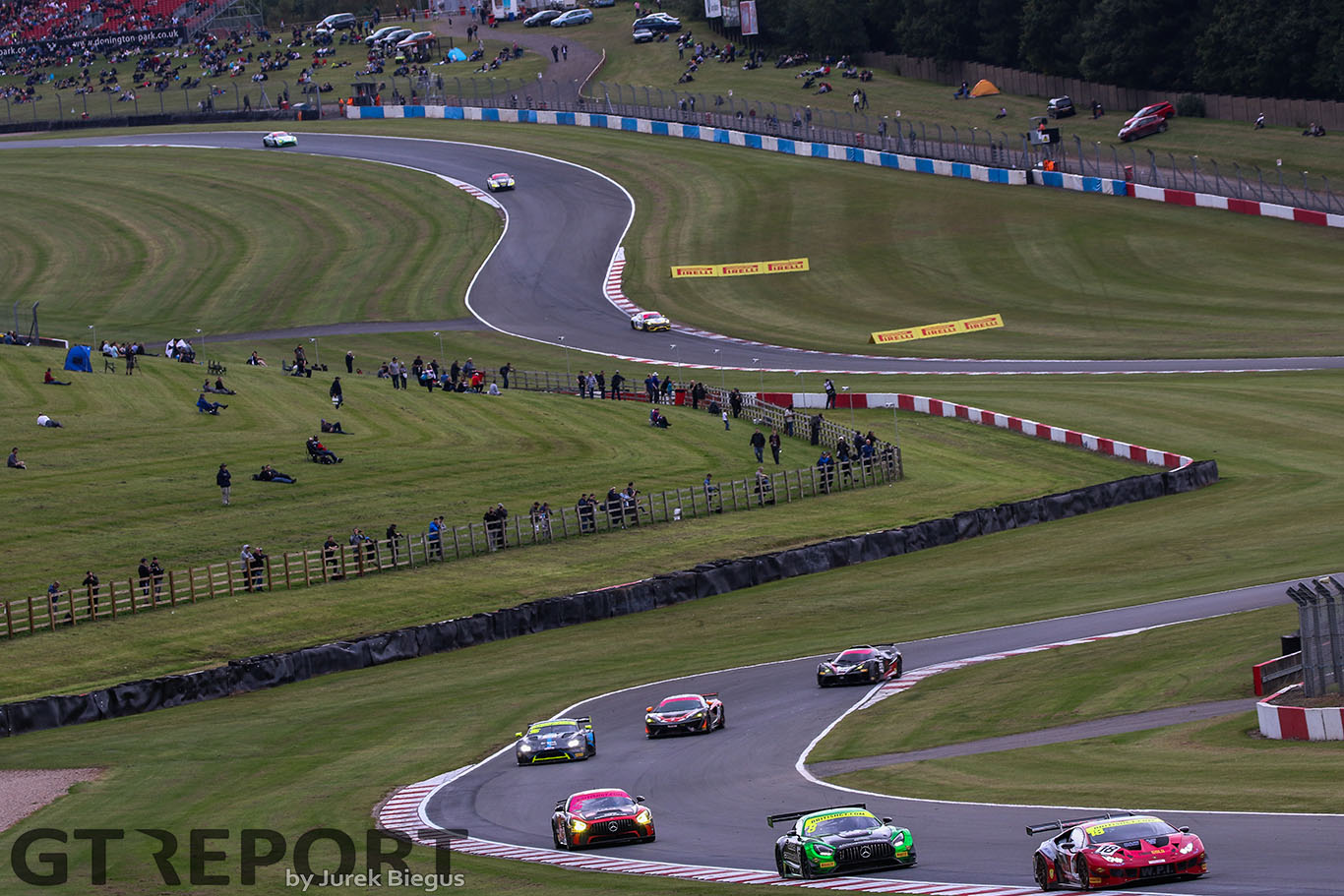 From there on, the ‘Barwell Curse’ that has denied Phil Keen a drivers’ title for the last four years appeared to raise its head again. Holding on strongly for a time, Balon lost out massively as he and Angus Fender – in the Century Motorsport BMW M6 GT3 went to lap the TrackFocused KTM GT4 coming out of the Old Hairpin. Fender went left and Balon went to go round the KTM’s right, but the KTM jinked right to avoid the BMW and completely blocked the Lamborghini.

Powering up Schwanz Curve, Balon managed to split Fender and the KTM but Balon jigged right and clipped the X-Bow. It was subsequently discovered that that light contact had broken the rear-right toe link in the Huracán which was exposed fully when Keen took over the car and went rallycrossing across the infield at the Craner Curves, swift work repaired the broken part but the damage was already done and the Barwell pair finished well down the order.

Balon told British GT TV: “We hoped. Anything can happen in the final round and just a little tap and everything changes. The broken toe link was on the same side as the contact so I suspect that’s how it broke.

“I was on the outside and he didn’t see me which meant I got blocked then going up the track there just wasn’t enough room. After that I was driving right-hand down for the rest of the race and every left-hand corner tried to spit me off.”

Back at the front of the field and Davidson fought his way up to third in a stint Jonny Adam told GT REPORT after the race ‘required little input from the team on the radio’ as the Scot pinched the position off Fender just before the pit window opened.

With Balfe handing over to Rob Bell with a comfortable advantage, the biggest move in the pits was Adam overcoming the team’s 20-second success penalty from their Brands Hatch penalty to come out ahead of their main title rival Jonny Cocker – in the sister Barwell Lamborghini started by Sam De Haan. 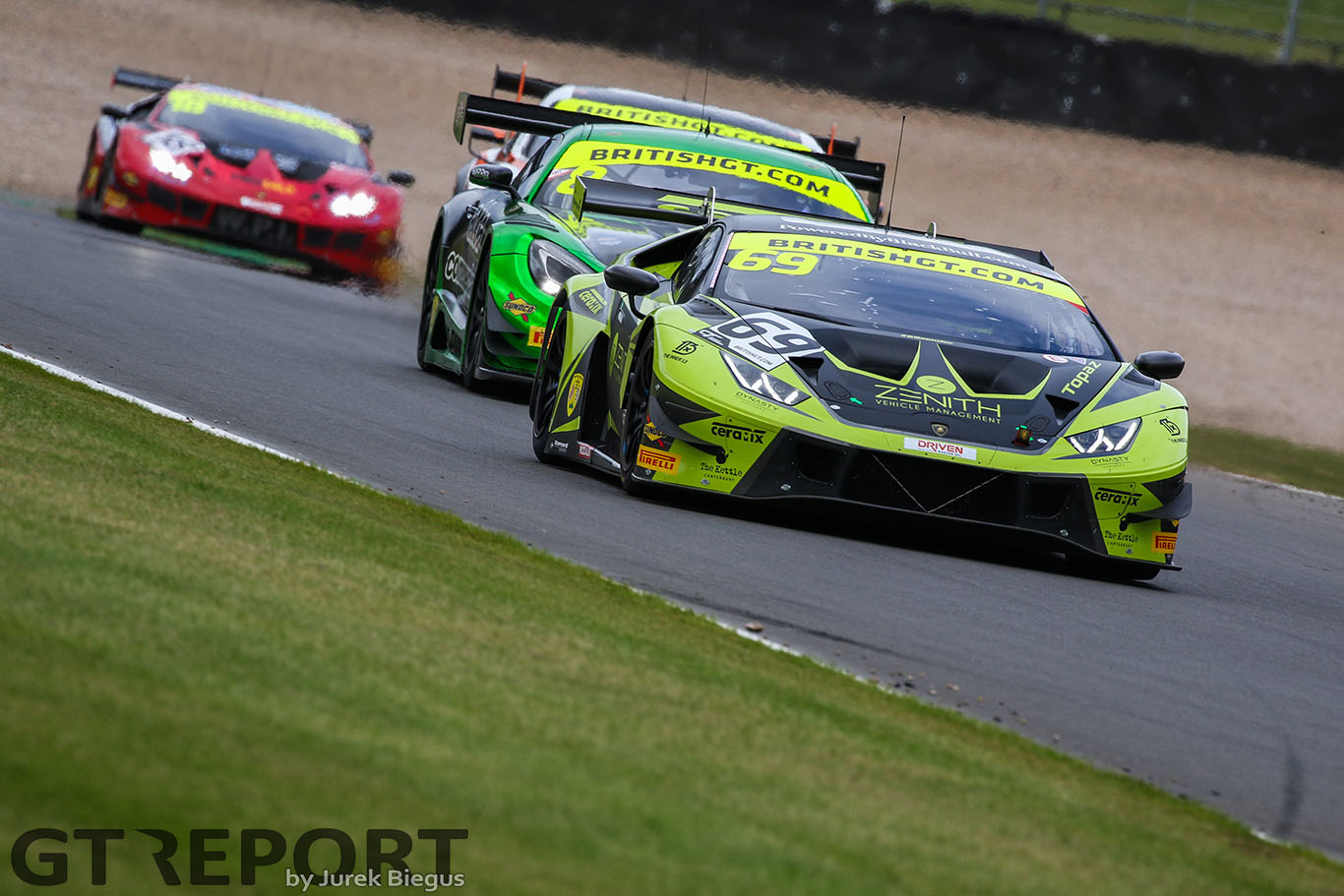 In the final 20 minutes, Lind picked his way past Cocker and onto the back of Adam, with more than a few gentle taps to let the three-time champion know he was there.

It was those hits that sparked off contention post-race. With less than four minutes to go, Lind hit Adam harder than he had done previously going into the Old Hairpin, with the loss of momentum allowing Lind and Cocker to sail past Adam going up to MacLeans.

Cocker moved up to fourth, with Adam in sixth behind Lind, which gave Cocker and De Haan the title by 0.5 points. However, a five-second post-race penalty on Lind meant the TF Sport car was promoted back up to fifth and Adam claimed a fourth British GT title, with Davidson taking his first British GT title two years after he claimed glory in a McLaren MP4-12C in GT Cup. Davidson is also the fourth different driver Adam has claimed the drivers’ title alongside. 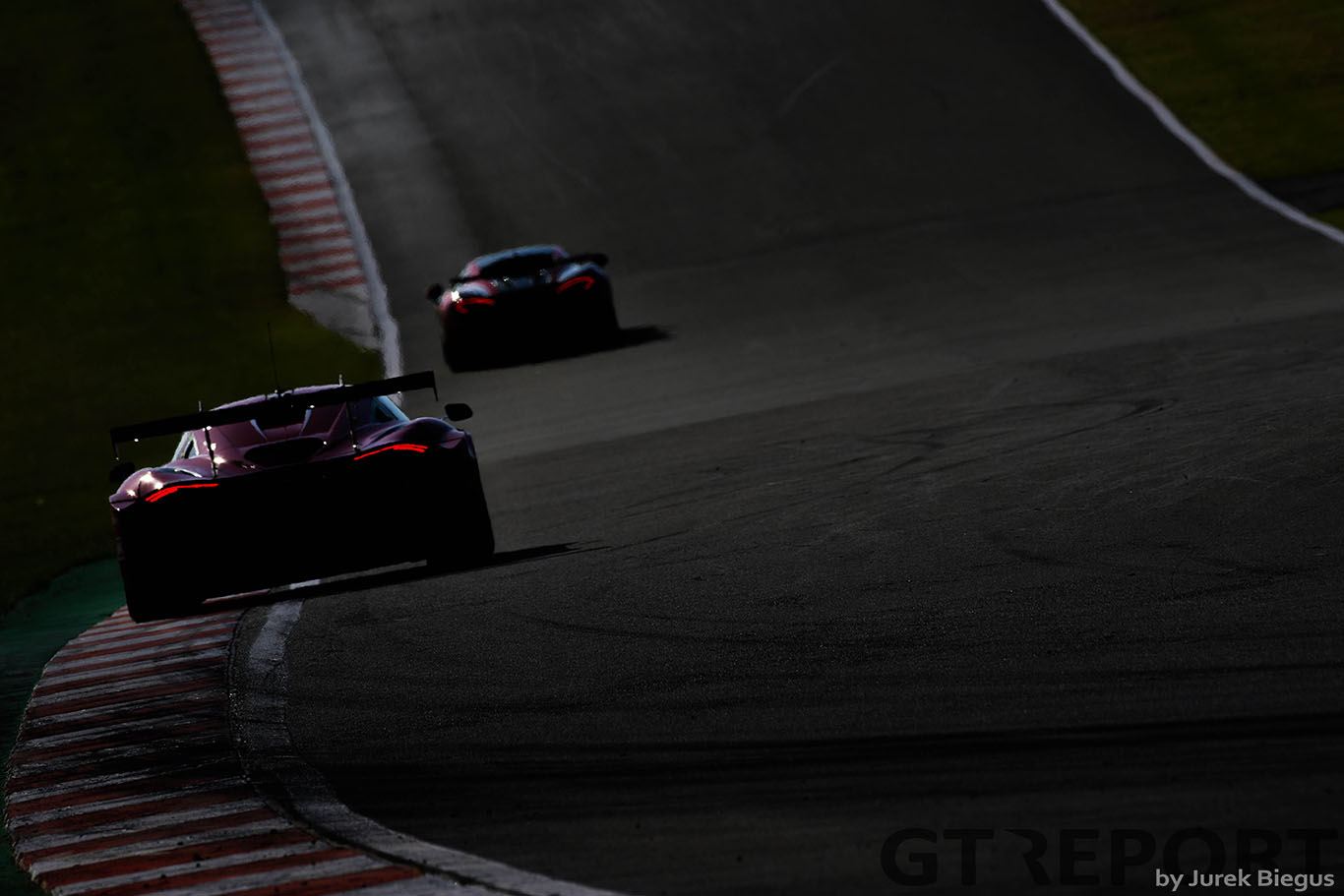 All of that didn’t affect the top three though, which was too spread out to descend into a late fight – helped by a late safety car to recover the #35 Optimum Motorsport Aston Martin which was hit by the Race Performance Mustang at the Old Hairpin. The GT4 traffic between all the podium contenders meant Balfe and Bell had a two-second gap over Callum Macleod and Ian Loggie in the Mercedes while Fender’s early hardwork paid off as he and Jack Mitchell claimed a second podium in as many races in third.

Shaun Balfe told GT REPORT that victory was hard-fought: “It’s been a long-time coming. It felt like we’d done enough on occasions to win but the racing gods didn’t let us win.

“We had a great car under us all weekend and the key thing was not making any mistakes. It was hard though, it seemed like getting through the traffic was a game in itself so it was great to have had such a good race.”

The second class was equally as intense but not quite as controversial as Steller Motorsport added to its win from Snetterton with an error-free drive to the class victory in its Audi R8 LMS GT4 driven by Sennan Fielding and Richard Williams.

Third was enough for TF Sport’s Ash Hand and Tom Canning to seal the class title – and the Silver Cup crown – as their main title rivals, the Multimatic Ford Mustang of Seb Priaulx and Scott Maxwell, could only fight up to second when the pair really needed to claim a win to secure the title in the first of the car racing in Britain. 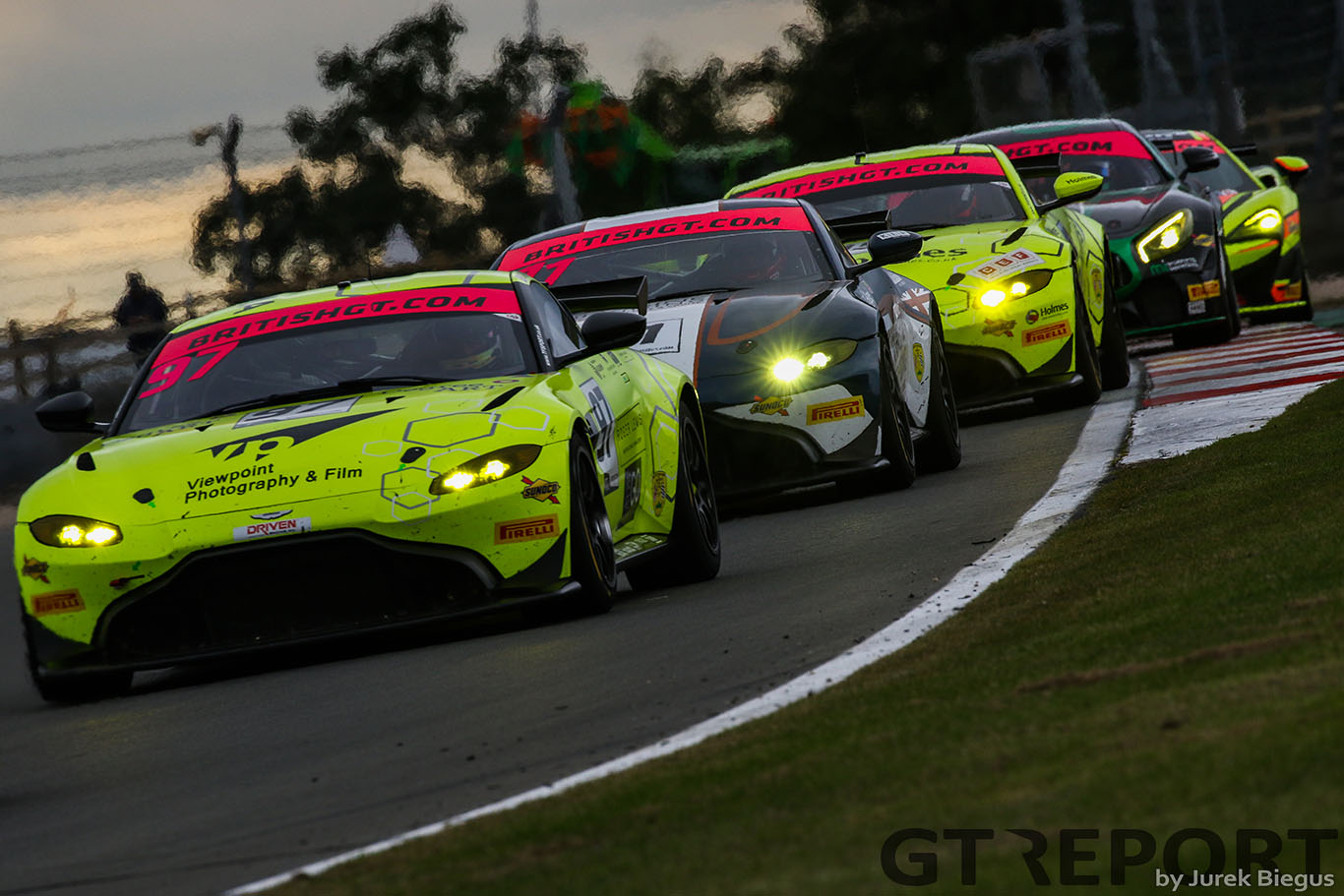 From the start, the TF pair always had half-a-hand on the title as a strong start from Canning allowed him to settle into second behind Williams, with team-mate Patrick Kibble acting as a rear-gunner and providing extra cover to allow Canning to break clear.

And break clear he did. Extending his stint to the extent that he was the last GT4 car to pit – in order to avoid being caught out by the HHC McLaren of Callum Pointon and Dean Macdonald potentially benefitting from a safety car – with Hand coming out in second.

With just over 20 minutes to go, Priaulx climbed up the order and powered past Hand – who elected to not fight too hard in order to avoid potential car damage – into second. Hand then came under immense pressure from eventual Pro/Am title winner Martin Plowman in the Beechdean Aston Martin. Hand fought for all his might to maintain the position, knowing if he slipped down to fourth, Priaulx could win the title if he found his way into the lead.

However, on both fronts the race went Hand’s way as Fielding proved to elusive at the front of the field to give Priaulx even a sliver of a chance to get through, and Plowman couldn’t pick his way past onto the podium.

That meant Hand and Canning were clear title winners, with Plowman and Strictly Come Dancing star Kelvin Fletcher taking the Pro/Am honours in fourth overall. Priaulx & Maxwell rounded off a strong year for them with another podium in second.

Keep your eyes on GT REPORT throughout the week for full interviews from British GT Donington Decider with Plowman & Fletcher, Hand & Canning, and Adam & Davidson. 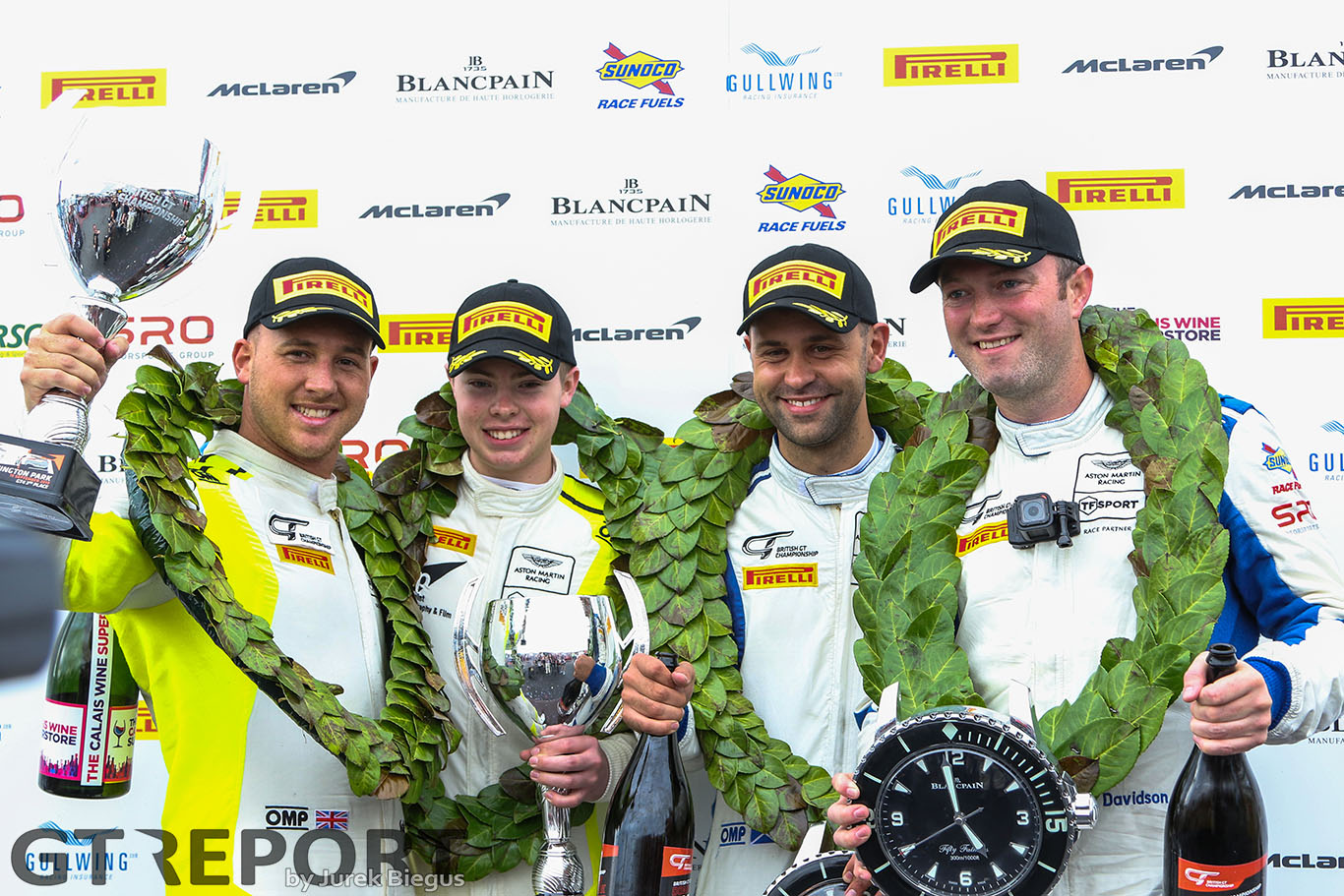 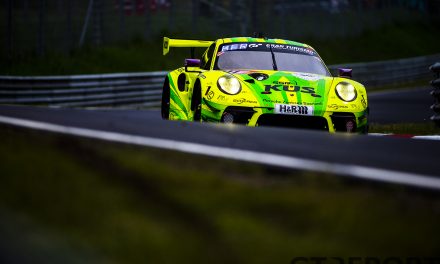 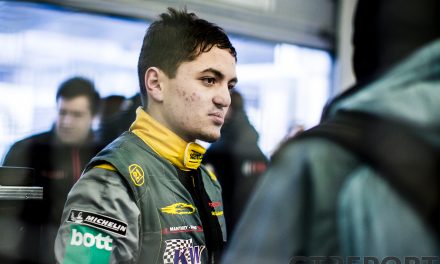 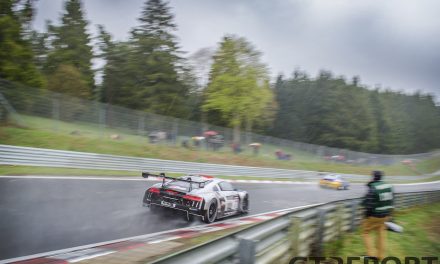