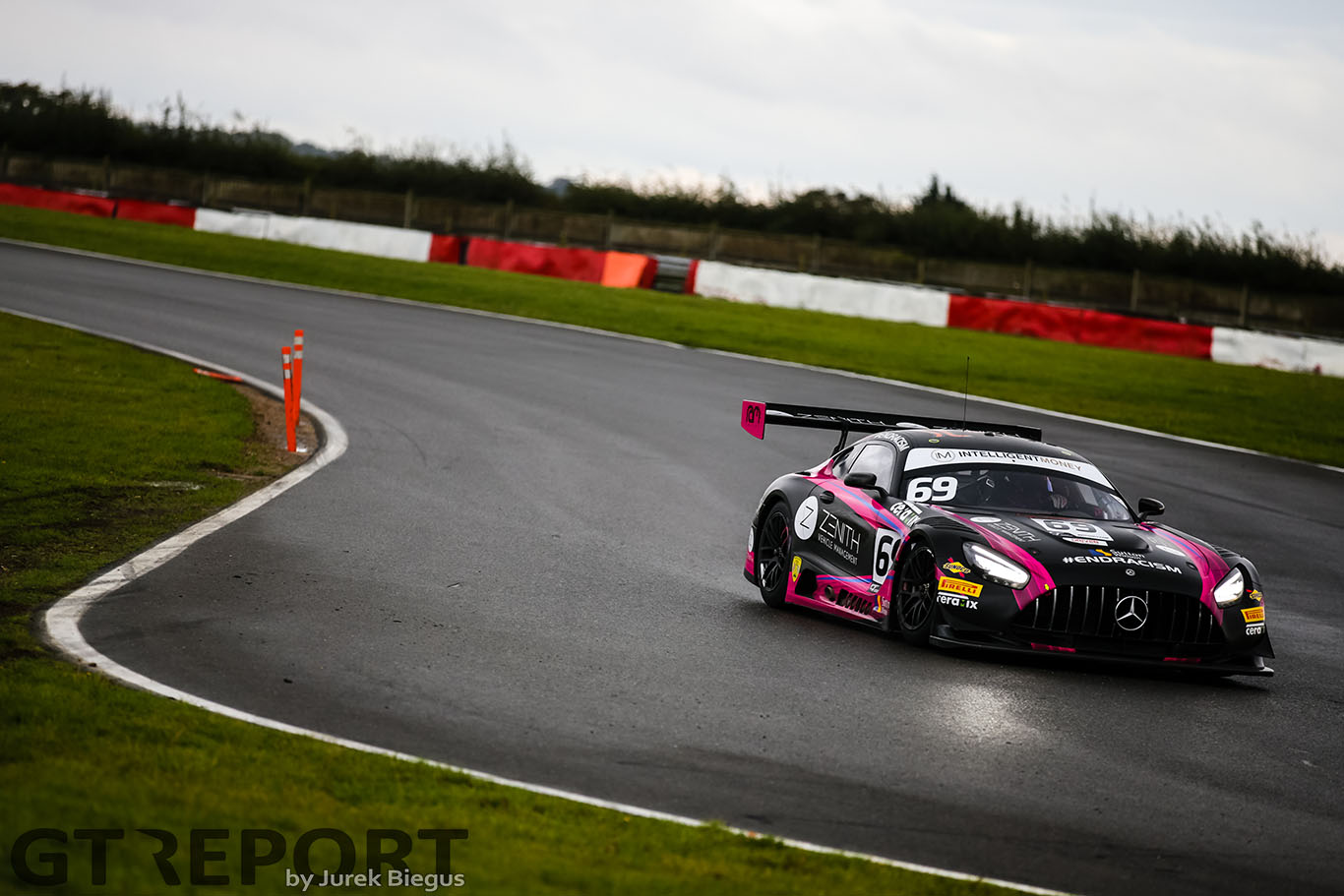 GT4 featured a storming pole for race one by Jordan Collard in the HHC Motorsport McLaren, while Matt Cowley made the most of an emerging dry line to snatch the top spot in race two for Academy Motorsport.

As customary with the one-hour sprint races, like those at Snetterton, the Am drivers set the grid for race one, with the Pros making up the order for race two.

De Haan, in the RAM Racing Mercedes-AMG GT3, came out on top of a session-long battle with Rob Collard in the Barwell Motorsport Lamborghini Huracán as the pair traded the top spot in the closing laps of the ten-minute qualifying.

Initially, it was De Haan’s team-mate Ian Loggie who was the man to beat. But as the track dried, the Silver-rated drivers came to the fore.

Initially Collard was the first to reach the top, with a comfortable margin over De Haan, but the Mercedes driver found more pace in the closing stages to pip the ex-BTCC racer by 0.008sec before going even faster on his final lap to open up a 0.182sec margin over Collard.

Third, almost half-a-second down on the leading pair, was Jordan Witt in the first of the two 2 Seas Motorsport McLaren 720S GT3s as he increased in confidence throughout the session to move up onto the second-row of the grid. He was joined by team-mate Dean Macdonald after a late lap for the Scot secured him fourth.

After setting the pace early on, Loggie finished in fifth – 0.040sec ahead of Lewis Proctor in the Optimum Motorsport McLaren.

James Baldwin struggled for pace in the Jenson Team Rocket RJN McLaren and couldn’t continue his team’s run of pole positions as he ended up 0.441sec slower than Proctor in seventh. 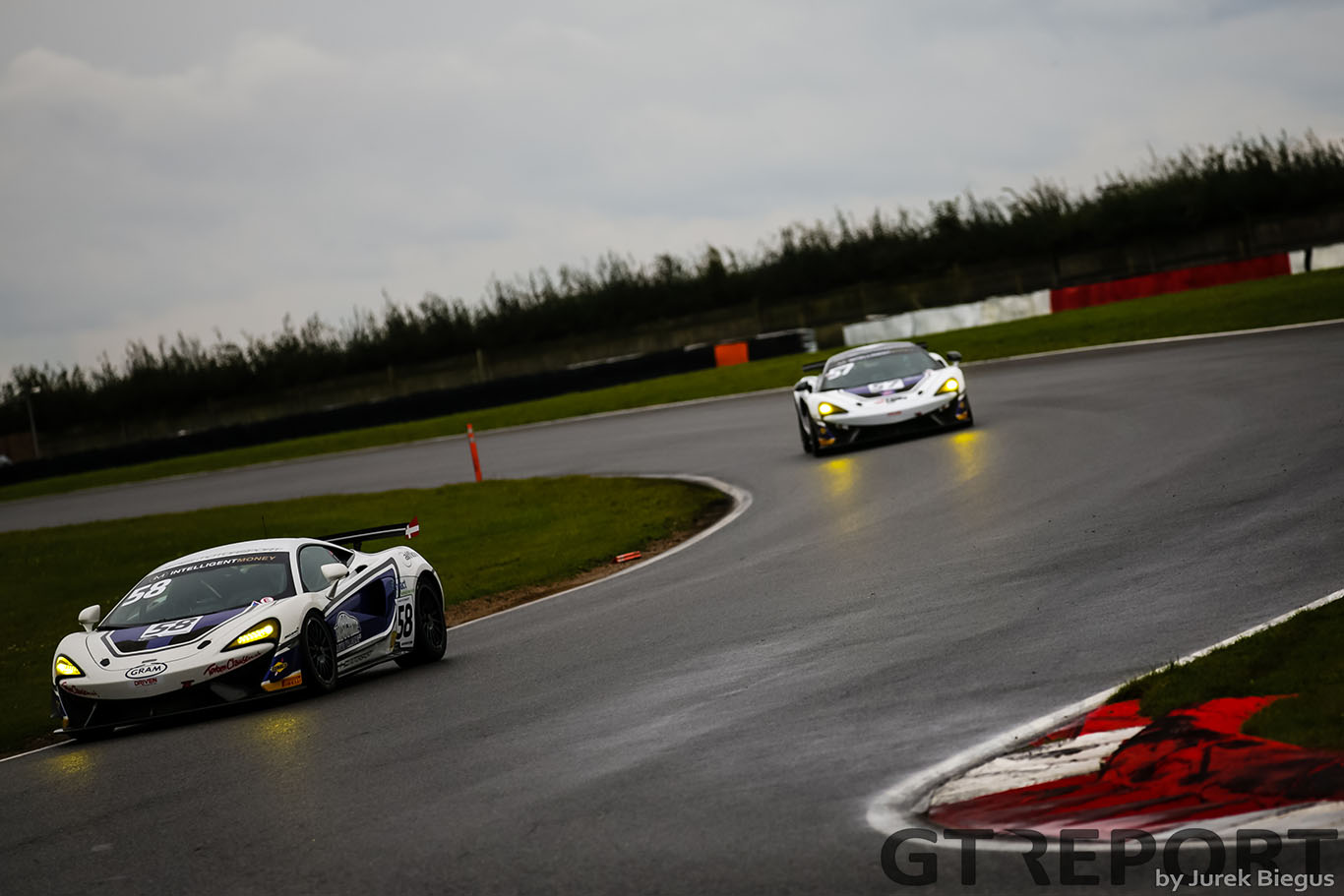 Lamborghinis took eighth and ninth with Michael Igoe well clear of Adam Balon – the latter more than two seconds ahead of the returning Duncan Cameron in the AF Corse Ferrari 488 GT3.

The battle for GT4 pole never really got going as Jordan Collard proved the class of the field in the #58 HHC McLaren as he took the top spot by more than a second from the sister #57 of Gus Bowers.

Championship rivals TF Sport could only take the second row with its Aston Martin Vantage GT4s as Daniel Vaughan recovered from having two laps deleted because of track limits violations to take third – just 0.010sec ahead of Connor O’Brien in the sister car.

Will Moore – replacing Jordan Albert in the Academy Ford Mustang – qualified in fifth in his first qualifying in the car with James Kell close behind in sixth. 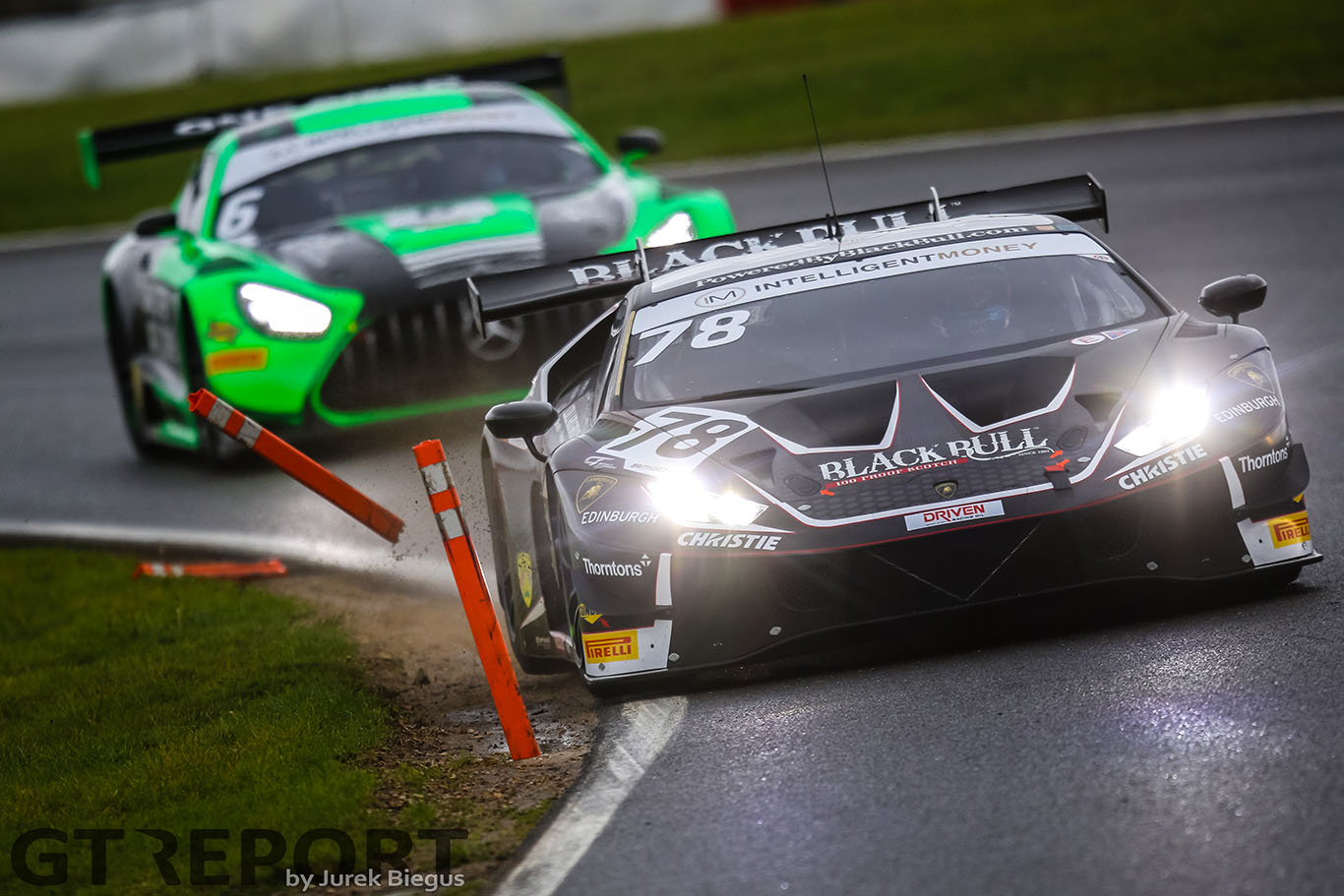 Sandy Mitchell proved Barwell’s pace in practice was no fluke as he headed a Lamborghini 1-2. Unlike practice, Phil Keen was powerless to take pole away from the young Scot.

It wasn’t easy for Mitchell though. Having taken over the car from Rob Collard, he had to come back into the pits on his first out lap to reattach the driver window netting which had come loose round his first tour of the Norfolk circuit.

Despite the delay giving him just two flying laps, Mitchell out-gunned Keen twice to snatch pole away from the factory driver by 0.643sec after a superb last lap Keen was unable to respond to.

Taking third – and the only other driver to qualify within a second of Mitchell – was Yelmer Buurman. The RAM Racing driver set the pace early in the session but couldn’t match the same times as the Lamborghinis ahead of him.

Indeed, it was only Buurman’s pace that stopped it being a Huracán top three as Donington 1 winner Andrea Caldarelli returned to WPI Motorsport and immediately got back on the pace to take fourth for the team.

Kujala couldn’t match team-mate De Haan’s early efforts as he took fifth in the #69 Mercedes, he’ll line up on the third row alongside Joe Osborne in his final race of the year in the part-season Balfe Motorsport campaign alongside Stewart Proctor.

Despite complaining a problem with the rear-left corner of his Mercedes, Sam Neary secured seventh for Team ABBA Racing by 0.052sec from Matt Griffin in the Ferrari. 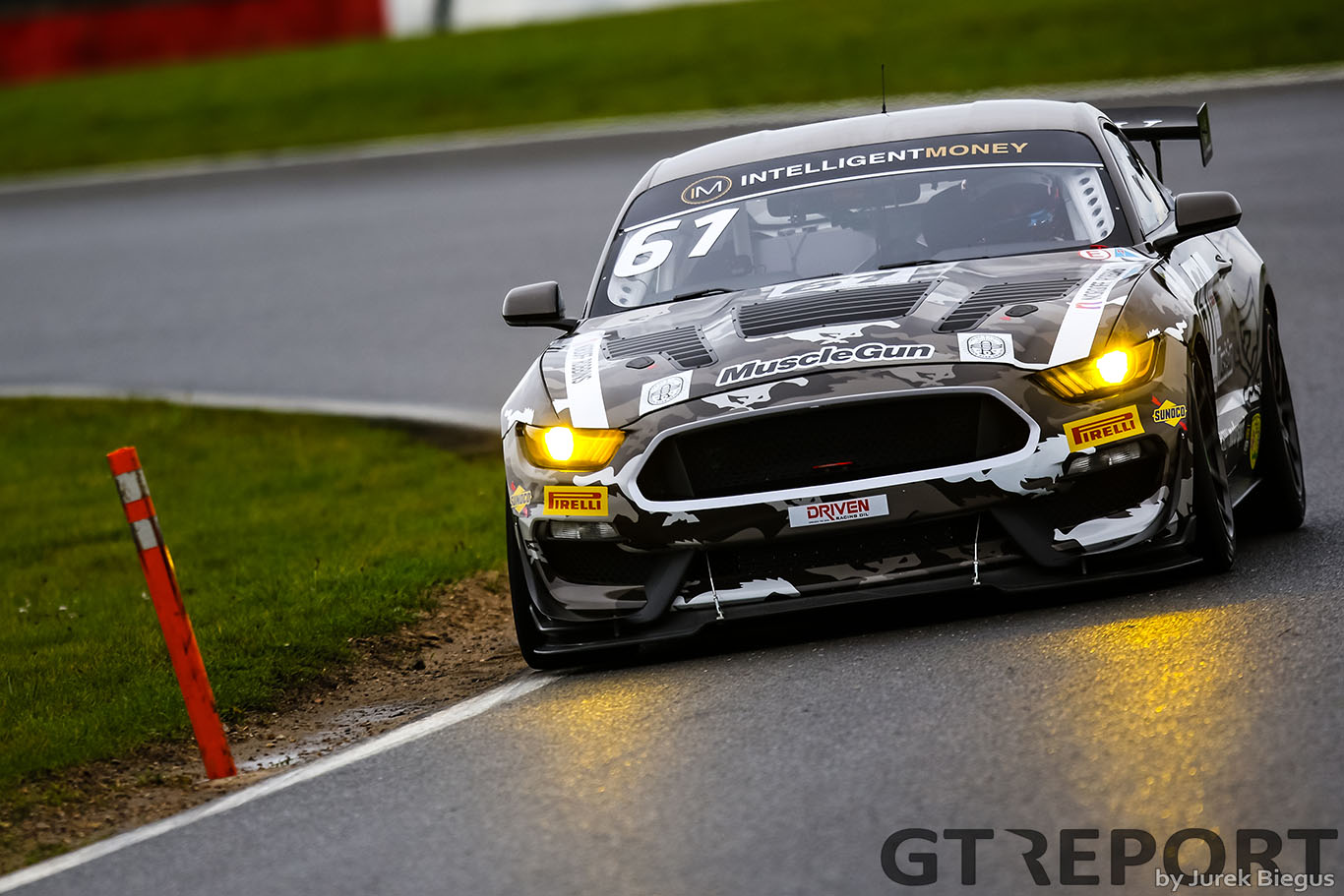 McLarens rounded out the top ten with Ollie Wilkinson’s Optimum model pipping Fender in the 2 Seas car. Jack Mitchell took 11th in the second 2 Seas entry with Scott Malvern 12th in the Bentley. Michael O’Brien struggled in the Rocket McLaren as he rounded out the GT3 grid.

Matt Cowley denied HHC’s #58 a clean-sweep of poles as he made the most of the drying track to qualify on pole by 0.065sec, with Patrik Matthiesen settling for the outside of the front-row.

The #95 of Patrick Kibble took third for TF Sport as he powered ahead of Chris Wesemael in the second of the HHC McLaren 570S GT4s.

Fifth was Jamie Caroline in the second in TF Aston, having got ahead of GT REPORT Nürburgring 24 Hour correspondent Ben Tuck with his final flying lap.

Euan Hankey put the Balfe McLaren seventh, with Adam Hatfield and Sam Smelt rounding out the field in their BMW and Toyotas respectively. 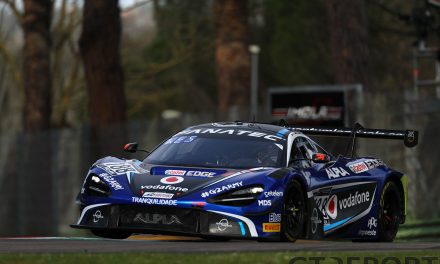 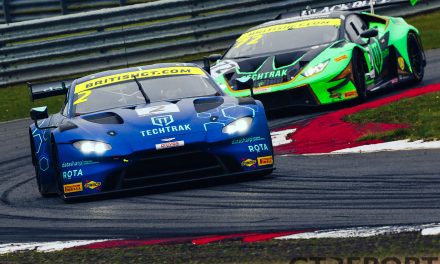 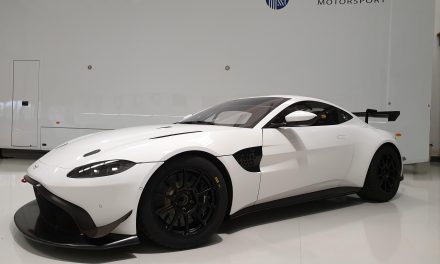