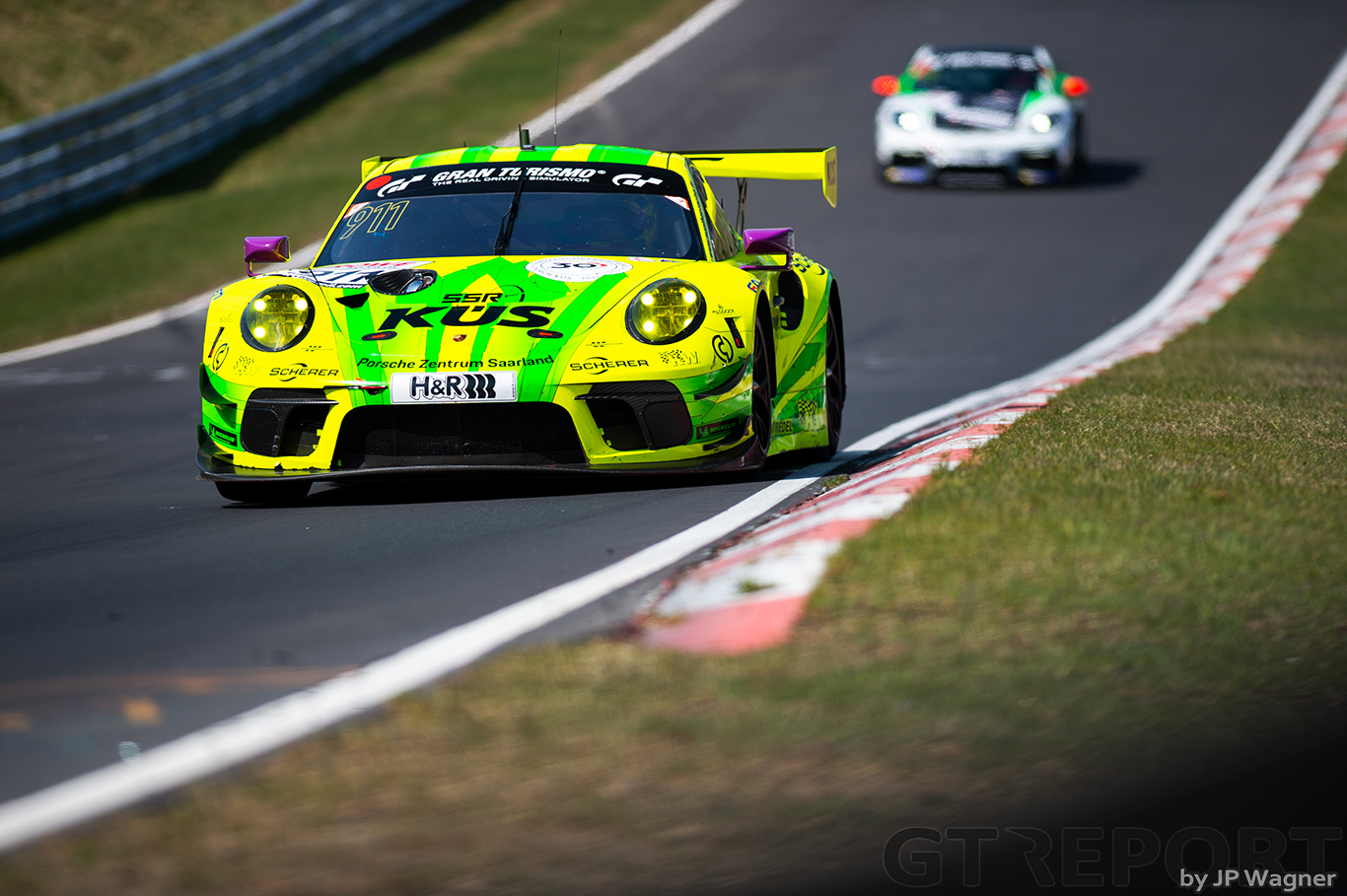 The race started with a little hiccup for pole-sitter Fred Makowiecki as his #31 Frikadelli Racing Porsche 991.2 GT3R took a little too long for comfort to get going for the formation lap. Despite the imperfect formation lap, the Frenchman brought the field to the first green flag of the year without breaking a sweat through the first corners. Behind him, Kévin Estre wrestled his way past the Phoenix Racing Audi R8 LMS GT3s of Frank Stippler and Michele Beretta, claiming second place and putting the pressure on Makowiecki for the opening lap.

Estre stuck to the back of Mako’s Frikadelli Porsche long enough to make his move at Döttinger Höhe. Waiving and not giving Estre an inch was Mako’s tactic to hold on to the lead, but Estre still completed the pass at the high-speed Tiergarten by making the grass part of his racing line. 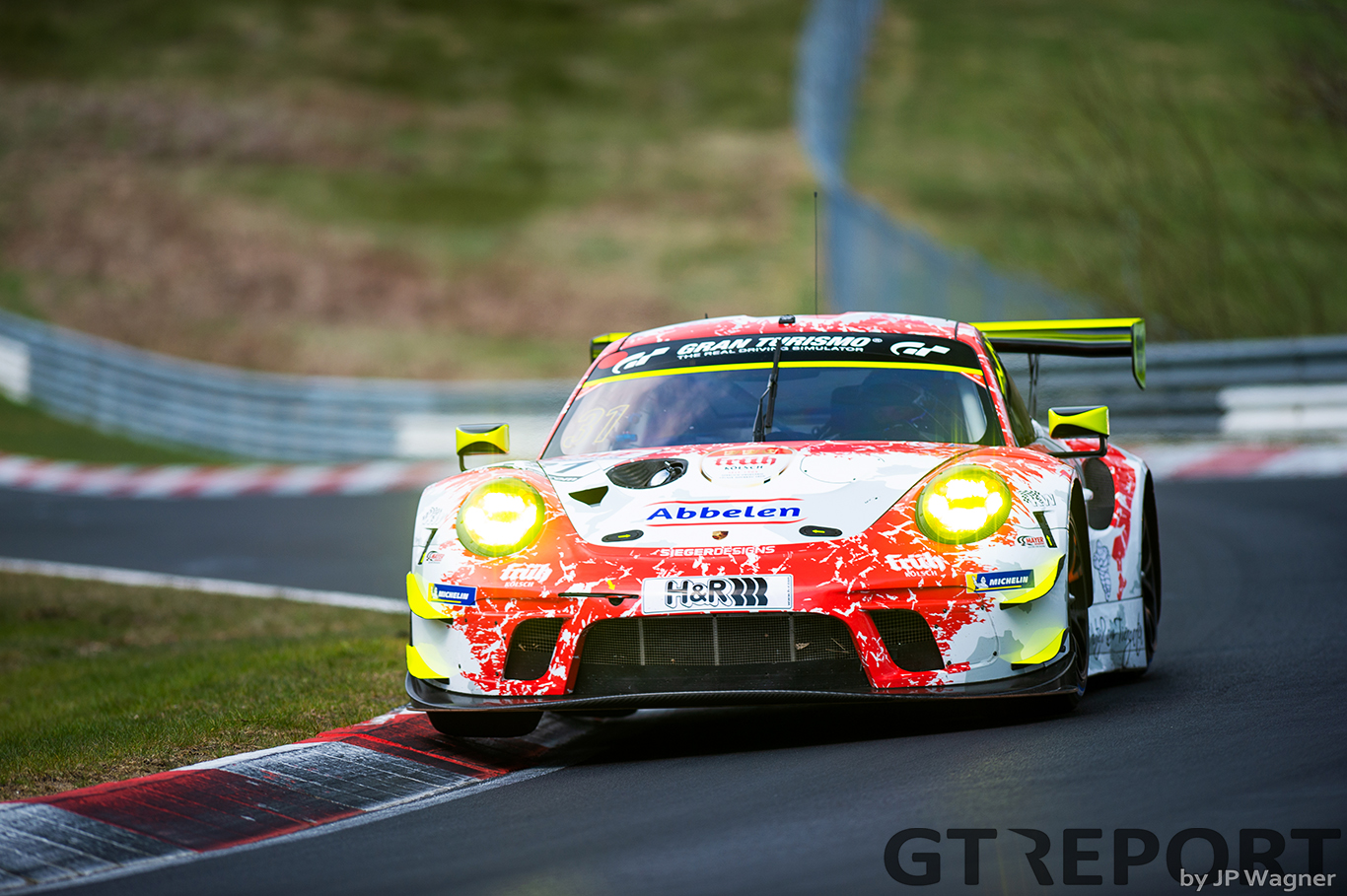 The incredible high pace of Estre lasted for four laps in which he set a new race lap record with 7:56.087. The result was a 10-second advantage in just four laps, until it evaporated on the fifth lap when Estre was the only leader to be held up by a Code 60 zone on the Grand Prix track. Undaunted by this taste of bad luck, Estre rebuilt another 10-second gap over Makowiecki at the end of his stint.

Different pitstop strategies gave the lead to the #11 Phoenix Racing Audi R8 LMS GT3 of Nicki Thiim. Having taken over from Michele Beretta who came in after just five laps and therefore was allowed a shorter minimum pitstop time, the Dane was now in charge of the field, followed closely by BMW Junior Team pilot Dan Harper – who replaced Augusto Farfus after as few as four laps – and Lars Kern in the #911 Manthey Porsche in third place, 16 seconds behind, and first of those on a conventional one-hour stint strategy.

Bleeding time in Code 60s, Kern was soon put under pressure by Makowiecki who found a way past to take third place – essentially a pass for the lead of the race. 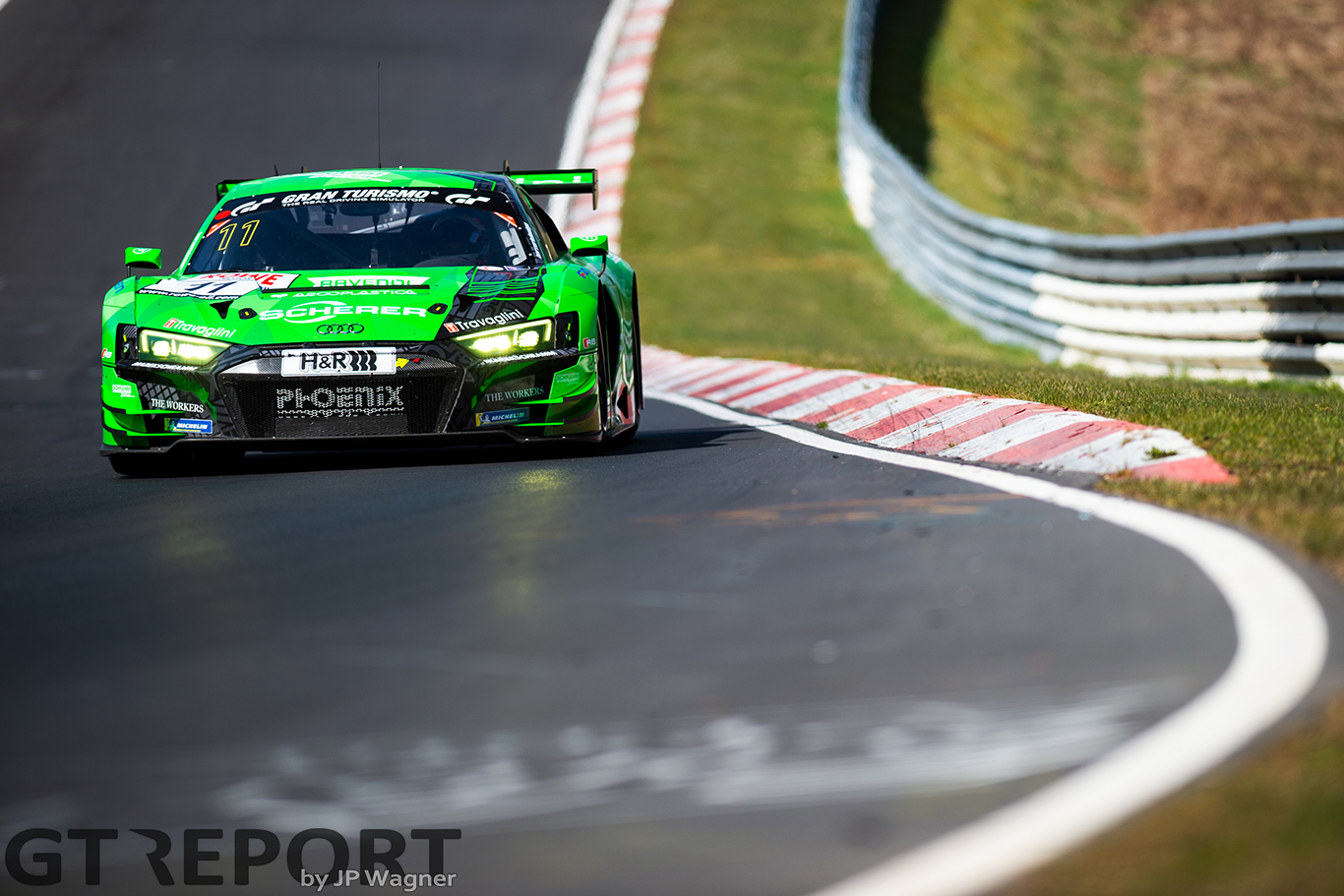 The two actual leaders weren’t letting down either: sub-8-minute laps were driven when traffic played along, giving Phoenix Racing and Team MRB-run BMW Junior Team hope for a jump to the front at the final round of pitstops.

To everyone’s surprise, Lars Kern re-emerged ahead of Fred Makowiecki a few laps later. It was the result of a spin by Makowiecki at the exit of Brünnchen. The time and track position gained on his most important competitor gave Kern the boost he needed open up a new gap.

Going into the third stint, the out-of-sync Beretta had taken over both the #11 Phoenix Audi and the lead, but behind him Michael Christensen – who was tasked with double-stinting the #911 Manthey Porsche to the finish – began closing in. It took the Dane nearly half an hour to close the gap and sweep past with a decisive overtaking manoeuvre. A short pushback by the Italian wasn’t enough to reclaim the lead. A stop-and-go penalty handed out to the Porsche for a fractionally too short pitstop, however, did, and relegated Christensen back to second.

The final round of pitstops saw Christensen retain the lead, with Dennis Olsen bringing the #31 Frikadelli Porsche back into second. The duo had made their pitstop with just under 45 minutes to go and with both Phoenix Audis having made their stops and at a fair distance from the 911s, it all but ensured a Porsche victory. 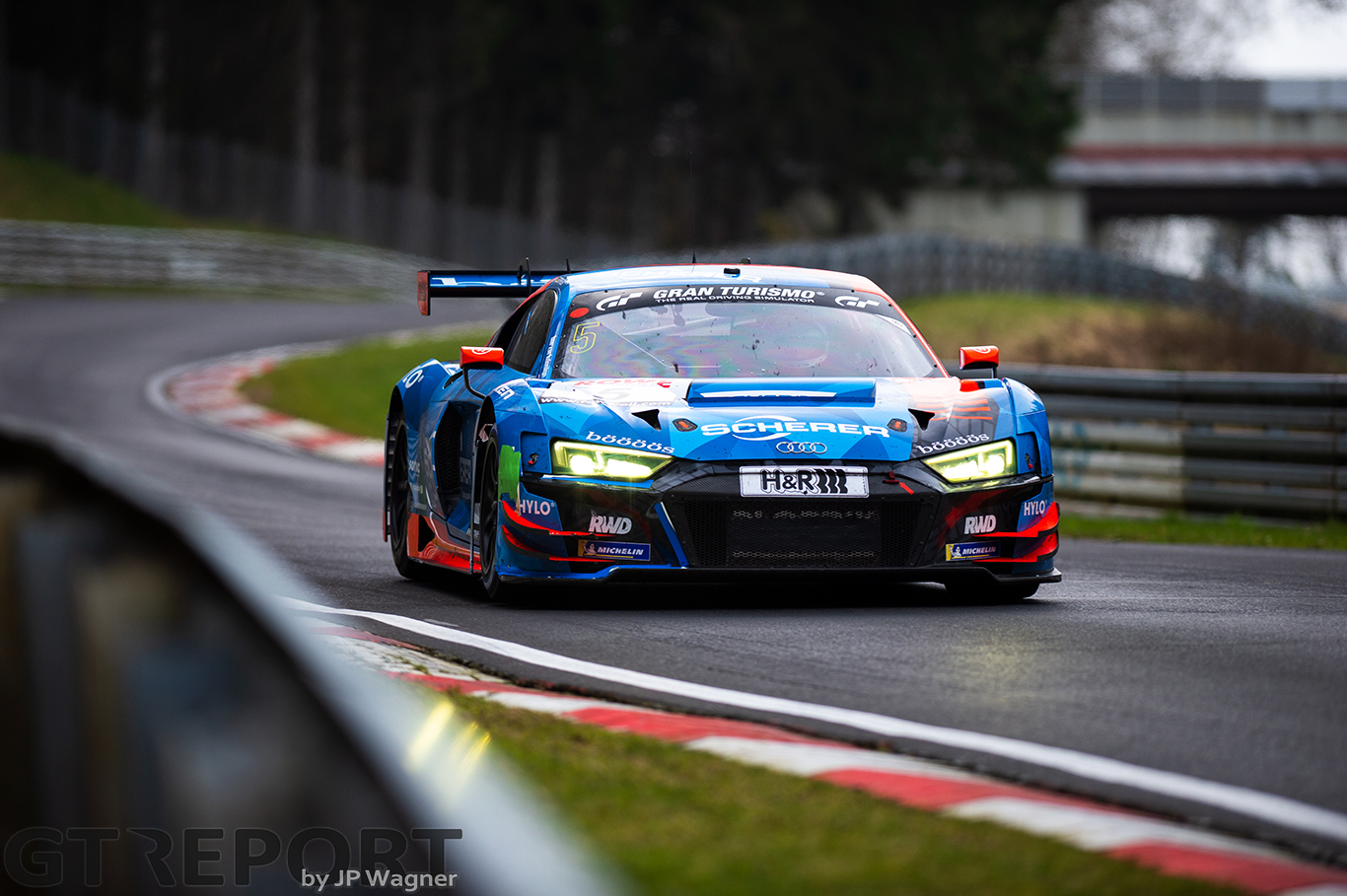 That left Thiim and Stippler – who could build upon a superb middle stint by his pupil and co-driver Vincent Kolb – to scramble for third. After a couple of laps of back and forth and third place changing hands at Döttinger Höhe, Thiim was in third place with five minutes to go and had Stippler right on his rear bumper. The veteran of thirty year of racing was biding his time until he could easily slipstream past Thiim at Döttinger Höhe, but had the unfortunate luck to get stuck behind a very slow backmarker between himself and Thiim during a yellow flag at Bergwerk. The misinterpretation of the yellow – the backmarker appeared to observe full Code 60 rules, rather than those for yellow flags – allowed Thiim to power through the yellow-flag zone while Stippler could do nothing but wait and watch the #11 Phoenix Audi disappear in the distance.

After a two-hour double stint, Michael Christensen crossed the finish line with a total of 29 laps for the first Manthey Racing victory in two years. Dennis Olsen took the chequered flag in second place for Frikadelli Racing, just in time to keep the unleashed Thiim behind. Stippler finished fourth, while Edoardo Liberati in the #18 KCMG Porsche 991.2 GT3R completed the top five. 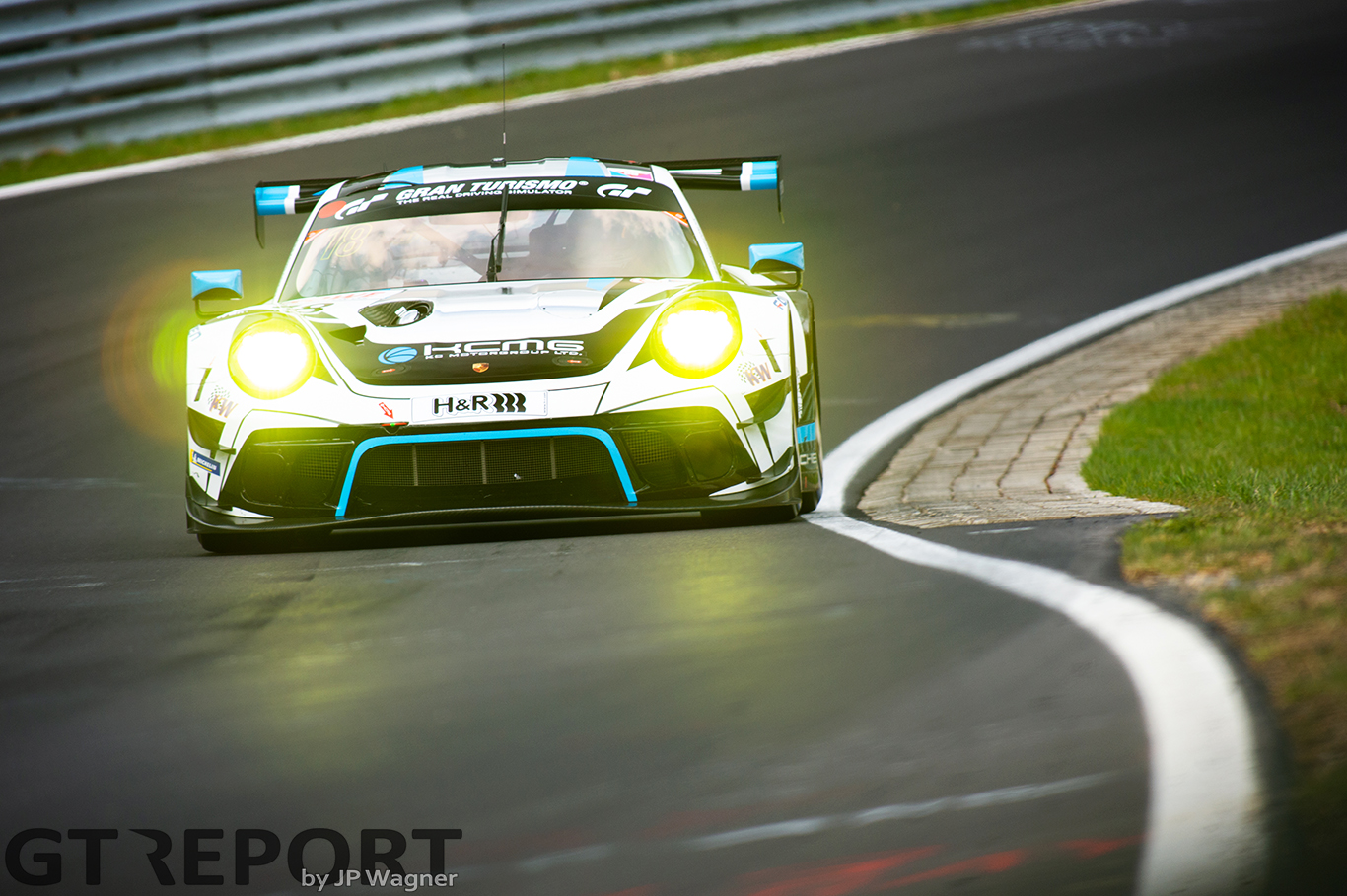 On 1 May the 62. Eibach ADAC ACAS Cup plays host to the third NLS race of the season. This will be the final NLS race before the ADAC Total 24h Race at the Nürburgring on 3-6 June. 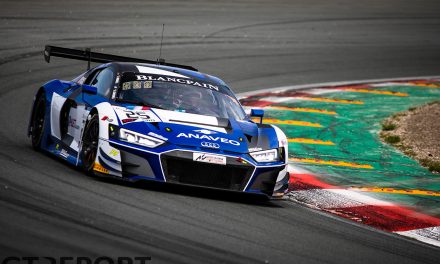 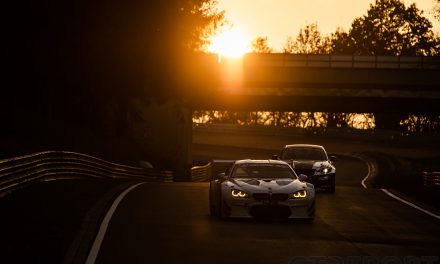 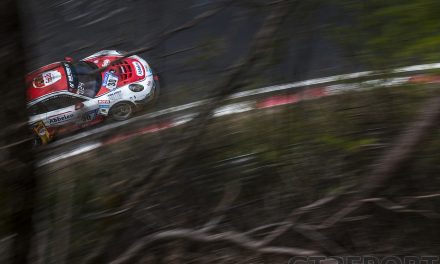